ADATA’s products have always focused on both price and performance and it appears that the new S511 SSD is no exception; they are claiming that it will reach up to a blistering 550 MB/s read and 510 MB/s write speeds with 4K random write speeds as high as 60,000 IOPS, all with a reasonable price. Armed with synchronous NAND, SandForce SF-2281 processor and a SATA 6Gb/s interface, the ADATA S511 goes up against drives such as the OCZ Vertex 3, Corsair Force GT, and others in the performance category. ADATA is selling the S511 in capacities ranging from 60 to 480GB with street prices between $114 and $989.


ADATA’s products have always focused on both price and performance and it appears that the new S511 SSD is no exception; they are claiming that it will reach up to a blistering 550 MB/s read and 510 MB/s write speeds with 4K random write speeds as high as 60,000 IOPS, all with a reasonable price. Armed with synchronous NAND, SandForce SF-2281 processor and a SATA 6Gb/s interface, the ADATA S511 goes up against drives such as the OCZ Vertex 3, Corsair Force GT, and others in the performance category. ADATA is selling the S511 in capacities ranging from 60 to 480GB with street prices between $114 and $989. 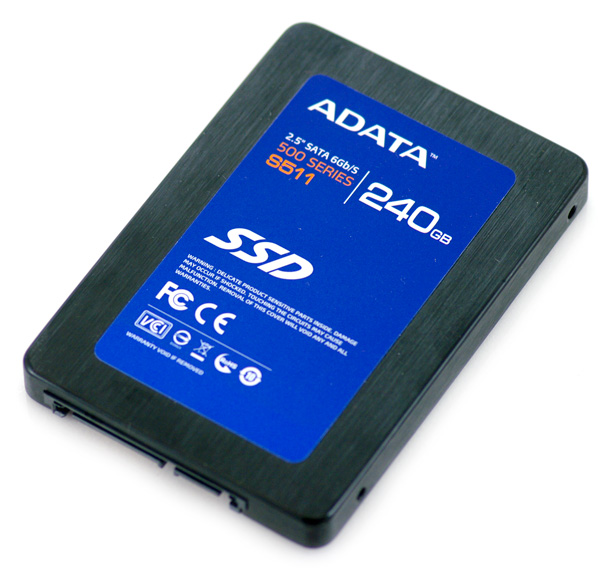 The ADATA S511 exterior casing is of a two-piece rugged metal design, held together with four Phillips screws. You’ll notice that it looks identical to the casing of S599 Series, as it uses the same design as last year’s model. With such a solid and high quality design, why mess with a good thing? ADATA also lists the capacity information on the front with the drive model number. 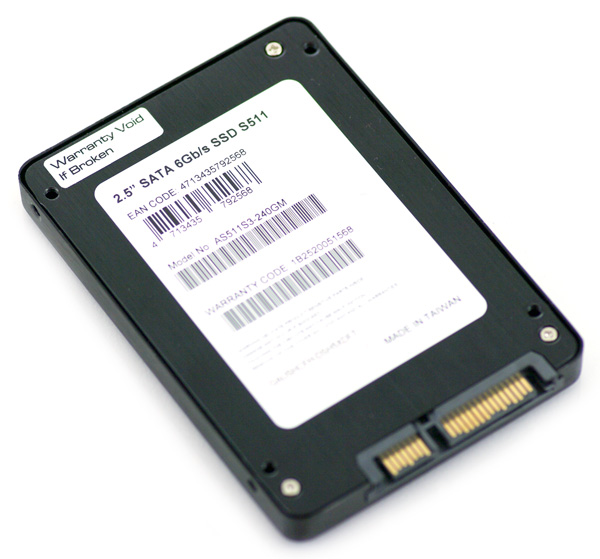 The side of the drive shows off the mounting points so you can attach this drive to sleds and hot-swap bays. The screws that hold the case together are all located on the bottom of the SSD.

Taking the ADATA S511 apart is very simple, but voids your warranty in the process as stated on the sticker. To split the SSD apart, you simply remove the four small Phillips head screws from the perimeter of the drive (the top-right screw breaks the warranty voiding sticker) and then use a fingernail to split the case open.

With the drive apart, you can see the top side of the circuit board, held in place with four additional screws. 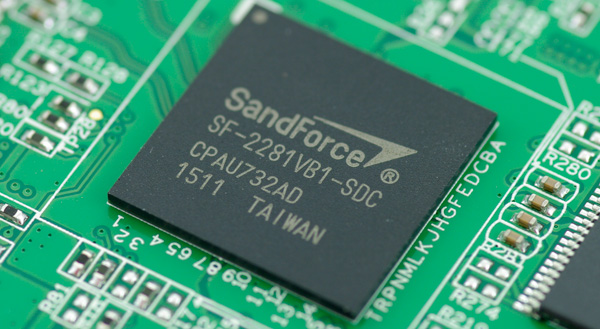 At the center of the SSD lays the SandForce SF-2281VB1-SDC processor. This powerful controller is has proven itself to be very reliable with both speed and performance, especially when combined with synchronous NAND which is also found inside this particular model. 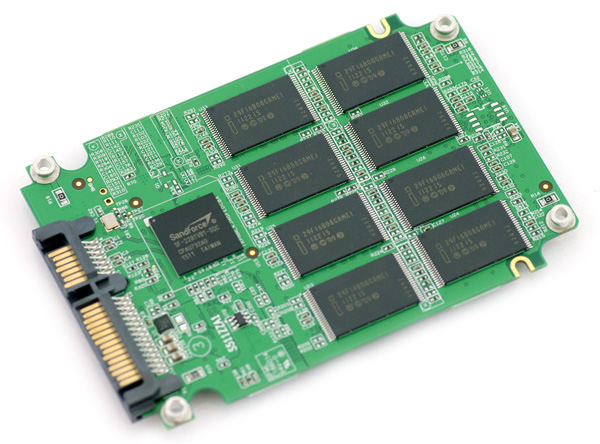 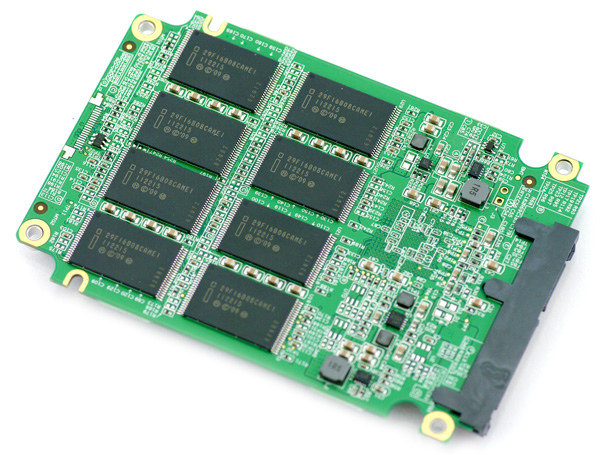 On the PCB, we can find eight Intel Synchronous NAND modules located on each side of the circuit board.

These synthetic benchmarks do not necessarily represent real-world performance; rather, they test specific areas of the drive such as maximum read and write speeds to show how well the drive can perform on its best day. 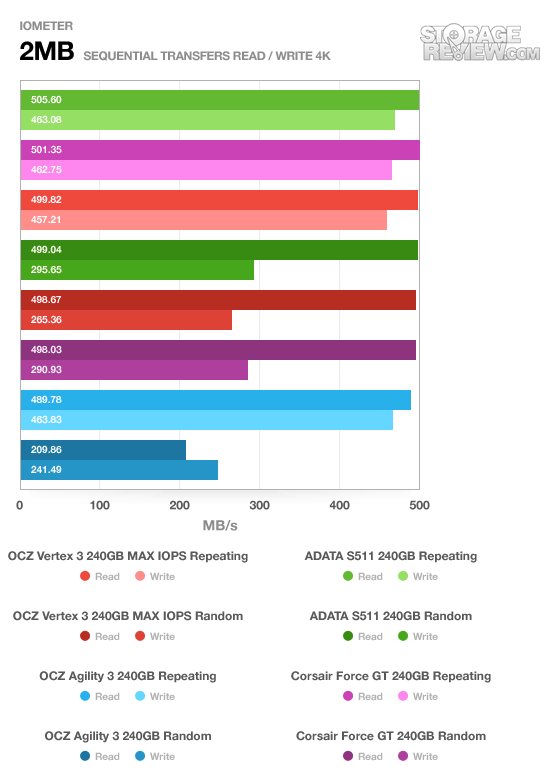 The 2MB sequential transfer benchmark represents how fast the drives can transfer large files. We can see that the ADATA S511– running the latest 3.3.2 firmware — outperformed the rest with a very fast 505.6MB/s read and was only slightly beaten in write speed by the OCZ Vertex 3 240GB MAX IOPS. The random benchmark uses incompressible data to show the SandForce processor in its worst case, since it compresses data to improve performance. 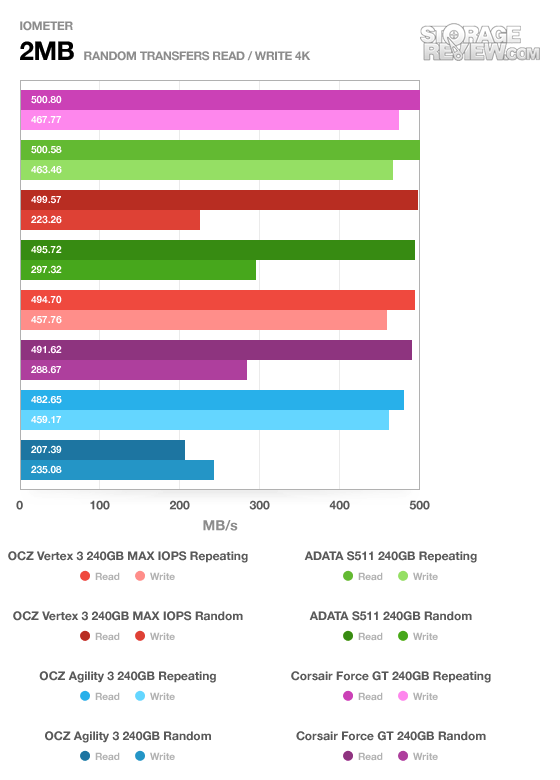 Think of the 2MB random transfer benchmark as transferring a number of different 2MB files across multiple parts for the SSD. Again, you can see that the ADATA S511 performed well with both incompressible and repeating data.

The next group of tests cover small 4K random read and write transfers. The first group shows drive performance at a queue depth of one, while later tests show how the drive scales as the queue depth increases. 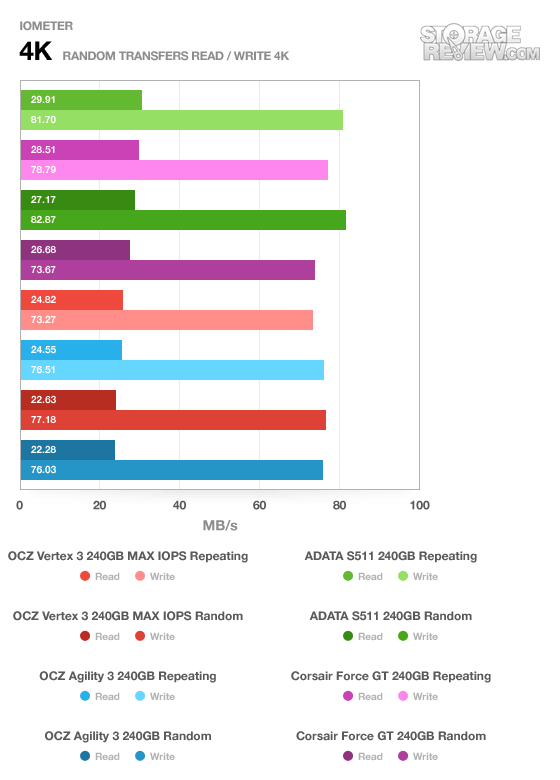 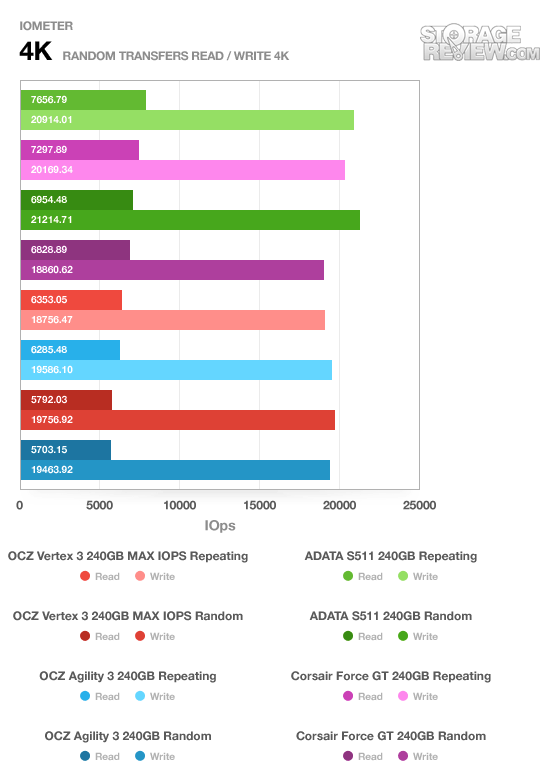 Here we can see the ADATA performed noticeably better than the other SDDs particularly in write speed.

Looking at the increasing queue depth 4K random read and write performance still ranked right up at the top of the charts. 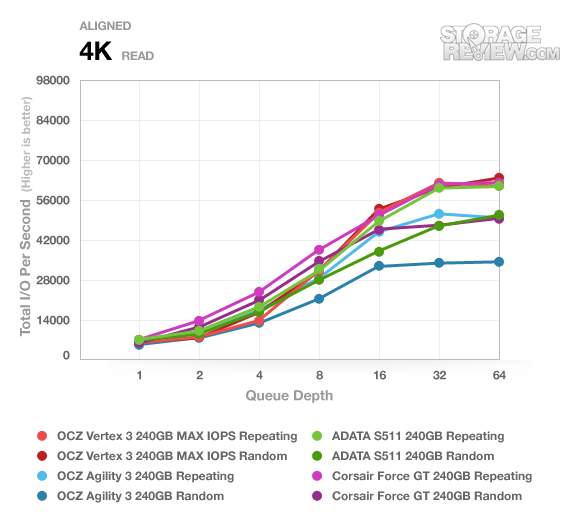 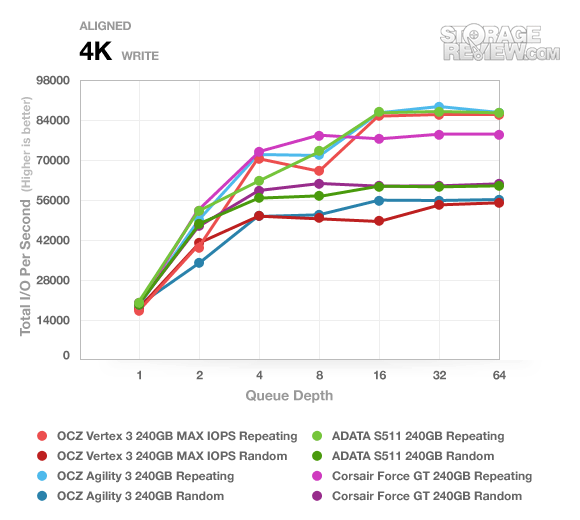 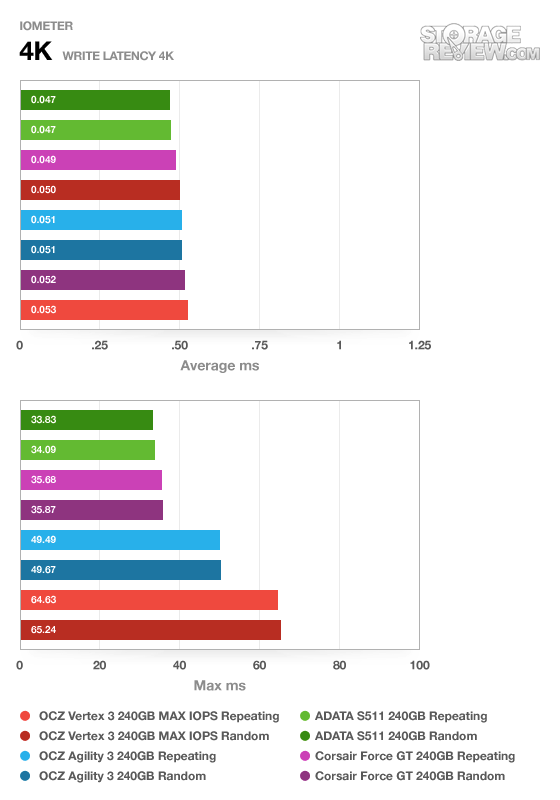 Using CrystalDiskMark we measured incompressible read and write speed on the S511, which measured in line with our IOMeter tests. 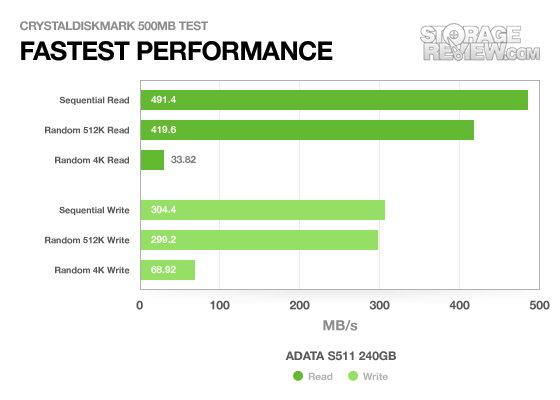 Our last synthetic benchmarks cover how the drives perform in an enterprise environment; the drives are subjected to server-style workloads. For the average consumer these benchmarks are generally not as relevant, but theyd still show how well the drive holds up in a demanding environment. We normally expect to see a performance increase from left to right as the queue depth increases from 1 to 128. The ADATA S511 falls a little bit here just behind the Vertex 3 and especially in the Workstation benchmark tests. 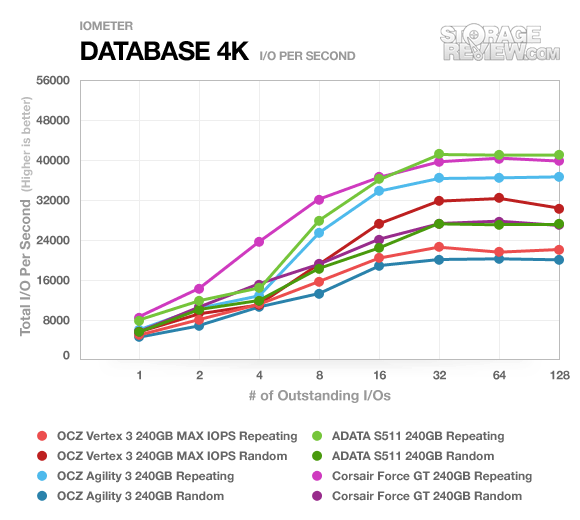 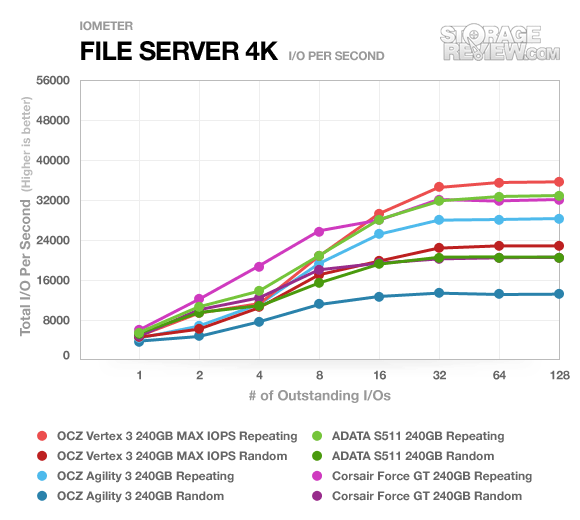 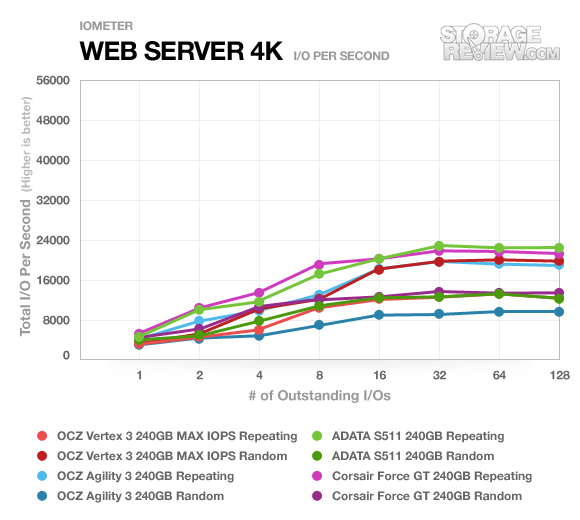 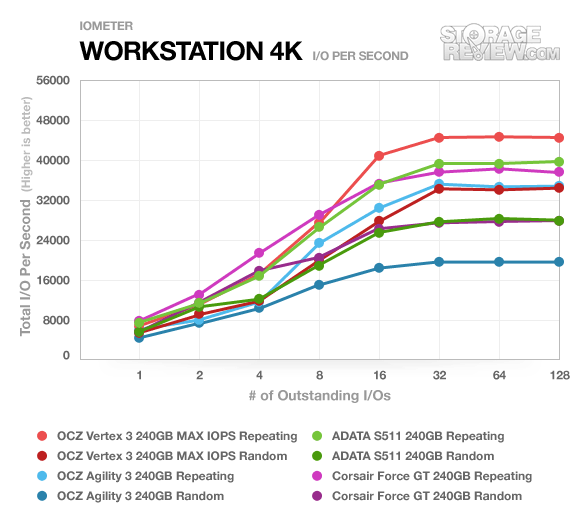 If you are new to StorageReview, one thing we try to focus on is how any given drive might perform under real-world conditions. For the average user, trying to translate random 4K write speeds into an everyday situation is pretty difficult. It helps when comparing drives in every setting possible, but it doesn’t exactly work out into faster everyday usage or better game loading times. For this reason we turned to our StorageMark 2010 traces, which include HTPC, Productivity, and Gaming traces to help readers find out how a drive might rank under their conditions. 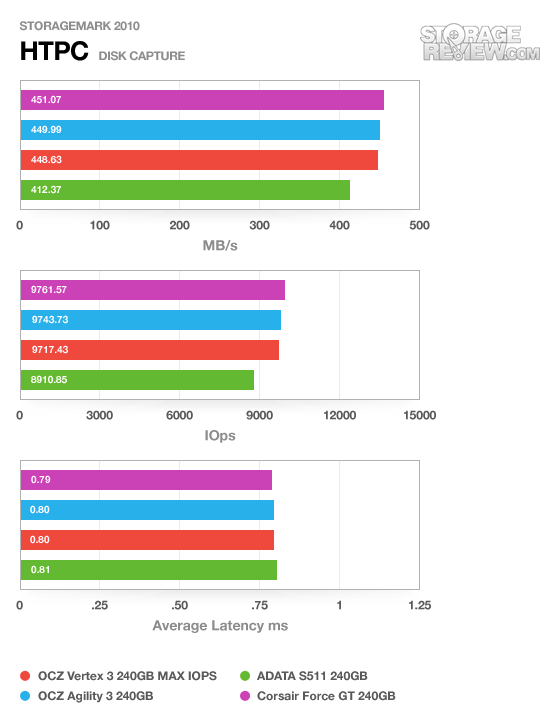 Here, the ADATA S511 lagged behind the group, coming up 8% slower than the Vertex 3 MAX IOPS which came in third place. 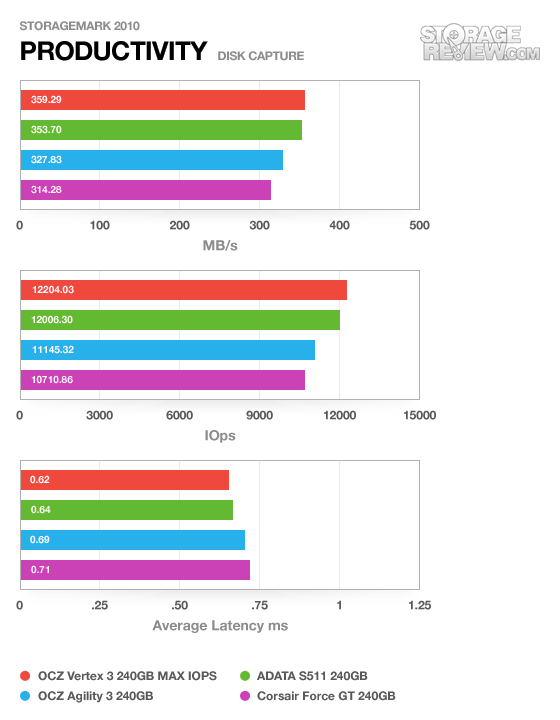 It looks like we are seeing a vast improvement for the ADATA S511 drive; performing just behind the OCZ Vertex 3. The difference between the two is small enough that it would not be noticeable in the real world. It is interesting to note while the Corsair while won the HTPC scenario, it was the slowest of the bunch in the Productivity trace. 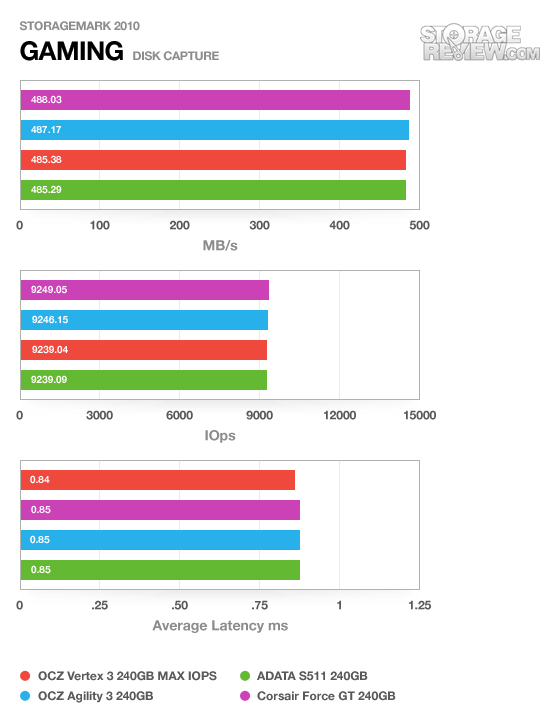 The gaming trace was the closest race in performance yet, with the ADATA only slightly trailing the others; most of the scores yielded almost identical results, especially with MB/s speed. Though they did have relatively good readings, none of the storage devices surpassed the 500 MB/s mark.

SSDs are notable for their low power consumption and the ADATA S511 240GB is no exception to the rule. 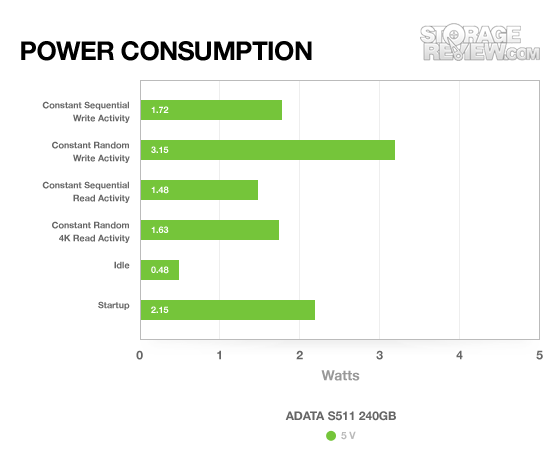 At idle the drive uses only 0.48W; a lesser notebook hard drive might use up to two times that reading. The highest values we measured during the activity tests were 1.63W for a random read and 3.14W for a write random.

The ADATA S511 240GB is an extraordinary performer, just as we would expect from a Sandforce SF-2281 powered SSD. It clocked in at almost twice the speed of the previous generation, a great step up for ADATA. Sequential performance is superb, but the 4K read and write results are in a class of their own at lower queue depths.

For SSDs though, a good portion of the buying decision comes down to price. The ADATA S511 is priced competitively with the 60GB model starting at $114 and the 240GB model reviewed costing $422 at retail. ADATA has managed to avoid a common pitfall seen with smaller volume players, and that is charging too much.

ADATA has done a lot of things right with the S511 with only a few stumbles along the way…and even then it hangs pretty well with the cream of the SSD crop. In the end the S511 is easy enough to recommend, a well-executed effort from ADATA.

The ADATA S511 240GB is an enthusiast-level SSD through and through, right at the top with some of the best-performing offerings on the market today.