The Dell Precision 7820 Tower (T7820) is a powerful workstation designed to handle data-intensive workloads, delivering dual-socket performance through Intel’s current gen Xeon processor Scalable Family (up to 28 cores per processor). Though it uses a fairly compact design, the T7820 is a fully customizable workstation that can be scaled as your needs grow. For example, the T7820 can be outfitted with a massive 384GB of 2666MHz memory and up to 24TB in storage capacity.

The Dell Precision 7820 Tower is a powerful workstation designed to handle data-intensive workloads, delivering dual-socket performance through Intel’s current gen Xeon processor Scalable Family (up to 28 cores per processor). Though it uses a fairly compact design, the T7820 is a fully-customizable workstation that can be scaled as your needs grow. For example, the T7820 can be outfitted with a massive 384GB of 2666MHz memory and up to 24TB in storage capacity.

Our particular build for this review includes:

At roughly 16 inches tall and almost 7 inches wide, the 7820 is a fairly compact workstation for the amount of power it offers. It features two separate bezels that double as ventilation (i.e., HDD bezel and front bezels that can easily be removed), with all the front connectivity stacked vertically in the center. The 7820 is also outfitted with a useful handle at the top left, allowing for easy transportation.

For connectivity and functionality, the front panel features a Power button/light, a drive activity light, an SD card slot, 2x USB 3.0 ports, two USB 3.0 Type-C ports (one with PowerShare), a headset port, and an optical drive tray. The panel can be removed to easily access the drives. Dell also has a PCIe sled that allows for easy access/replacement of the M.2 drive. 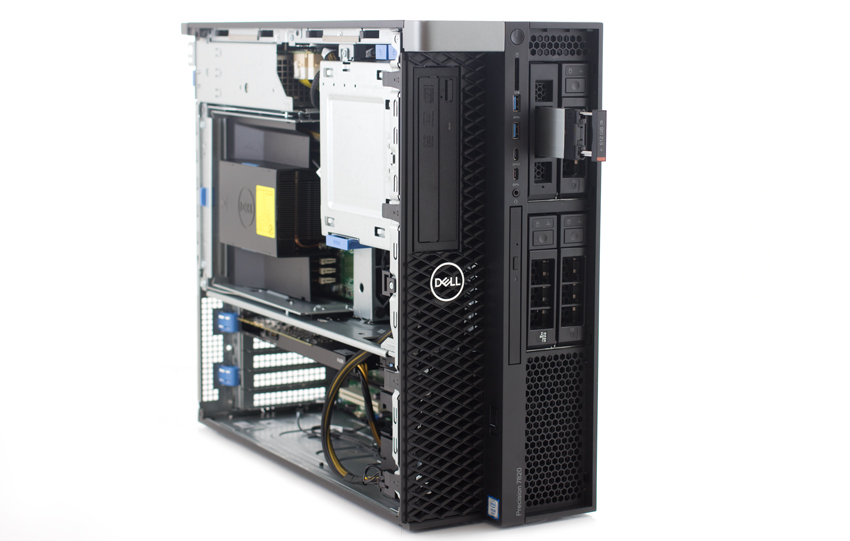 In our review unit, we equipped the Dell 7820 with the Quadro P4000, one NVIDIA’s powerful mid-range professional graphics cards. The P4000 is designed for demanding professional applications and features a 1792 CUDA core Pascal GPU, 8GB GDDR5 of memory and advanced display technologies with a very power-efficient 105W in maximum power consumption. 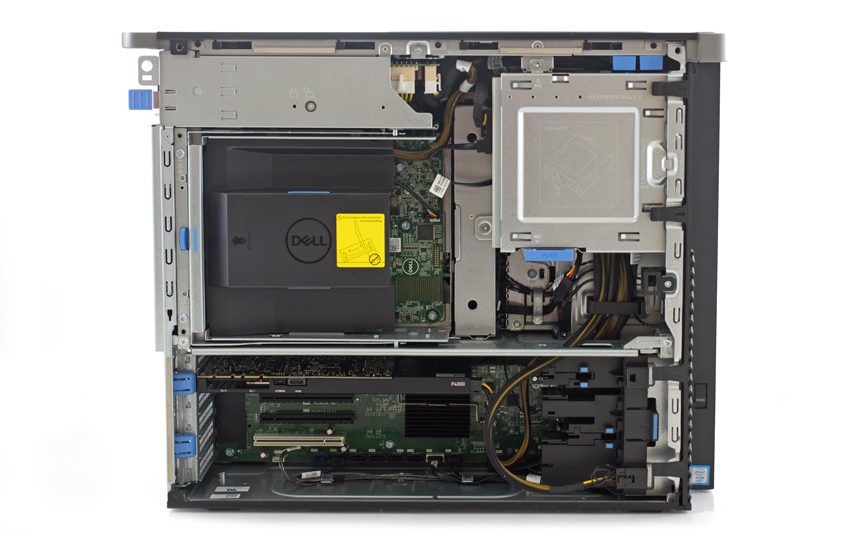 To test its performance, we put the Precision T7820 through a variety of benchmarks that gauge its ability to perform in resource-intensive scenarios and test how well the NVIDIA Quadro P4000 can perform inside Dell’s new tower workstation. We will be comparing the T7820 to the company’s 5720 All-in-One and Precision T7810.

This first benchmark was the SPECviewperf 12 benchmark–the worldwide standard for measuring graphics performance based on professional applications. SPECviewperf runs 9 benchmarks it calls “viewsets,” all of which represent graphics content and behavior from actual applications. These viewsets include 3D Max, CATIA, Creo, Energy, Maya, Medical, Showcase, Siemens NX, and Solidworks.

When outfitted with the Quadro P4000, the T7820 recorded some fairly impressive results, which was expected with a power-driven mobile graphics card like this. We also see a significant improvement on the previous T7810 model.

We also ran SPECwpc, which is a benchmark designed specifically for testing all key aspects of workstation performance. SPECwpc consists of over 30 workloads that it uses to test CPU, graphics, I/O, and memory bandwidth. The workloads fall under broader categories (average of all the individual workloads in each category) and are comprised of media and entertainment, financial services, product development, energy, life sciences, and general operations. Here, the T7820 recorded extremely impressive results, clearly demonstrating the system’s ability to thrive in intensive workload:

Using our ESRI benchmark, we looked at several aspects of the ArcGIS program. In cases like these, we are most interested in the average of the drawtime, average frames per second, and minimum frames per second. With drawtime, the T7820 recorded an average time of just 00:06.3430. Average FPS and minimum FPS showed impressive results again with 506.194 and 266.549, respectively.

As demonstrated above, Dell’s Precision T7820 proved to be an impressive desktop workstation that has some pretty deep customization options, including a wide range of high-end AMD and NVIDIA graphics cards like the Quadro P4000. Users can also power up their T7820 workstation with two Intel Xeon processors (which feature up to 28 cores per processor), up to a massive 384GB 2666MHz of DDR4 ECC memory. Dell also offers a variety of drive configurations for a maximum of 24TB total storage, which includes M.2 NVMe PCIe SSDs via the 6 available PCIe Gen 3 slots. It also features the usual connectivity options such as USB 3.1 Type A and C, USB 2.0, and a spot for a SATA optical drive.

To find out what this workstation is capable of, we put the T7820 through three distinct graphics-intensive benchmarks (the SPECviewperf, SPECwpc, and ESRI tests) and compared it to the 5720 All-in-One and Precision T7810. We outfitted our build with higher-end components, including an NVIDIA Quadro P4000, 96GB of DDR3 memory, Intel Xeon Gold 6148 CPU (2.40GHz), and a Samsung SM961 NVMe M.2 drive. Looking at the graphics-intensive SPECviewperf test, the T7820 demonstrated impressive performance. In our SPECwpc benchmark (which gauges CPU, graphics, I/O, and memory bandwidth performance), the T7820 clearly demonstrated the system's ability to thrive under intensive workloads. In our ESRI test, we recorded an average drawtime of 00:06.3430, while average FPS and minimum FPS boasted an impressive 506.194 and 266.549, respectively.

The T7820 is a powerful desktop workstation. With its storage, compute and graphics performance, users can be assured that it will be able to handle most resource-intensive workloads with ease, especially when outfitted with even higher-end components than what we had. However, as is the case of all customizable workstations, this all depends on if you are willing to expand your budget, as the T7820 can get expensive fast.

The Dell Precision 7820 Tower is a powerful desktop workstation with a range of impressive options to suit the needs of most resource-intensive use cases.