Hitachi continues to innovate in large-capacity hard drives, and it is easy to see from products like the Deskstar 7K4000 why Western Digital found Hitachi’s hard drive division an attractive acquisition. The 7K4000 provides four terabytes (TB) of storage at 7200RPM, and like the Deskstar 5K4000 which we recently reviewed, the 7K4000 uses a five platter design, paired with 800GB platters and 4KB sectors to increase maximum capacity and improve error correction. Compared to the 5K4000, The Deskstar 7K4000’s specs emphasize performance, so we’ll see some key differences emerge between the drives during benchmarks.

Much like its enterprise sibling, the new Ultrastar 7K4000, the Deskstar 7K4000 allows desktop and prosumer customers to increase data density, lowering the cost of storage per gigabyte without increasing the physical footprint or adopting a new interface or enclosure. The 7K4000 offers the largest capacity currently available in a standard 3.5-inch hard drive, with a 6Gb/s SATA interface and 64MB cache that make it very competitive against other high-capacity drives on the market. The Deskstar 7K4000’s green features include a halogen-free design, Extended Power Conditions, and eighth-generation power management technology with HiVERT. 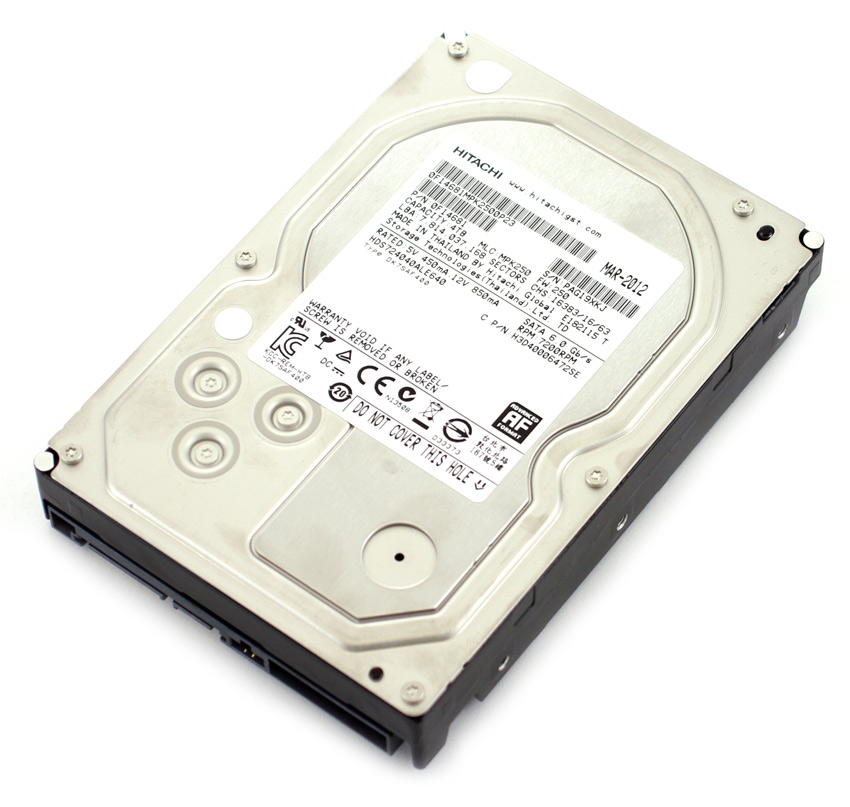 So far, acquisition by Western Digital has not changed Hitachi’s famously plain designs. The DeskStar 7K4000 label offers basic information about the model but trusts the customer to consult its manual for detailed specifications and configuration. The bottom of the drive maintains this sleek profile. 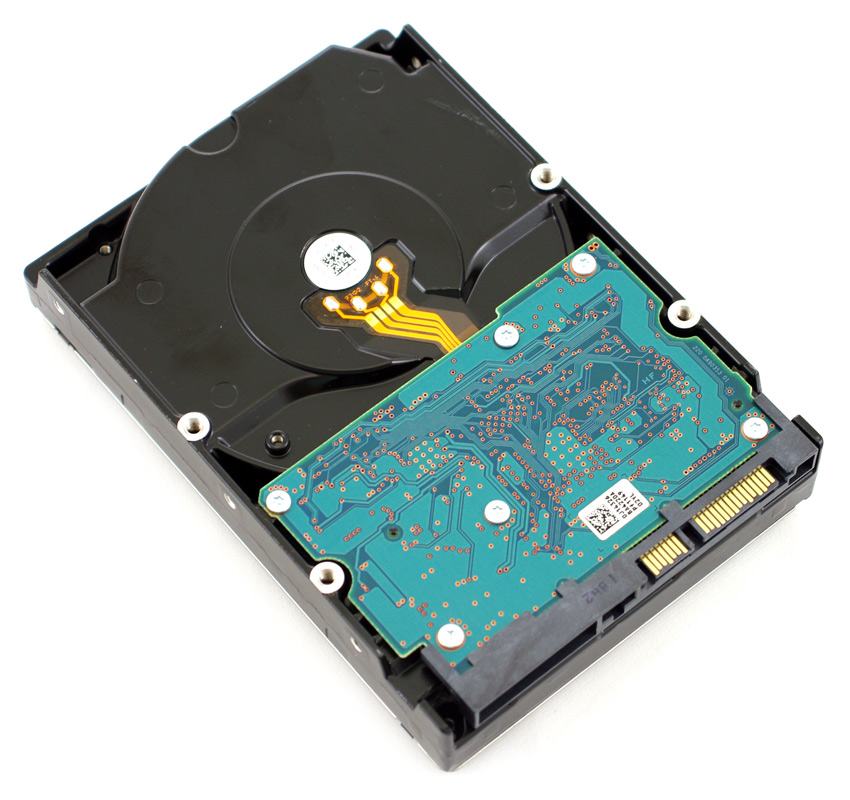 The 7K400 is assembled with standard Torx screws, and features an inward-facing circuit board for durability and thermal management. The front profile of the drive shows a standard SATA power and data interface, with a single jumper location.

Taking the circuit board off the body of the hard drive, we find a small pad that provides vibration isolation and some thermal isolation between the drive and controller components.

Once detached and flipped, the 7K4000 circuit board reveals an almost aesthetic sensibility with its simple, clean layout. As with other recent Deskstar drives, Hitachi provides the integrated cache, 64MB for the 7K4000. 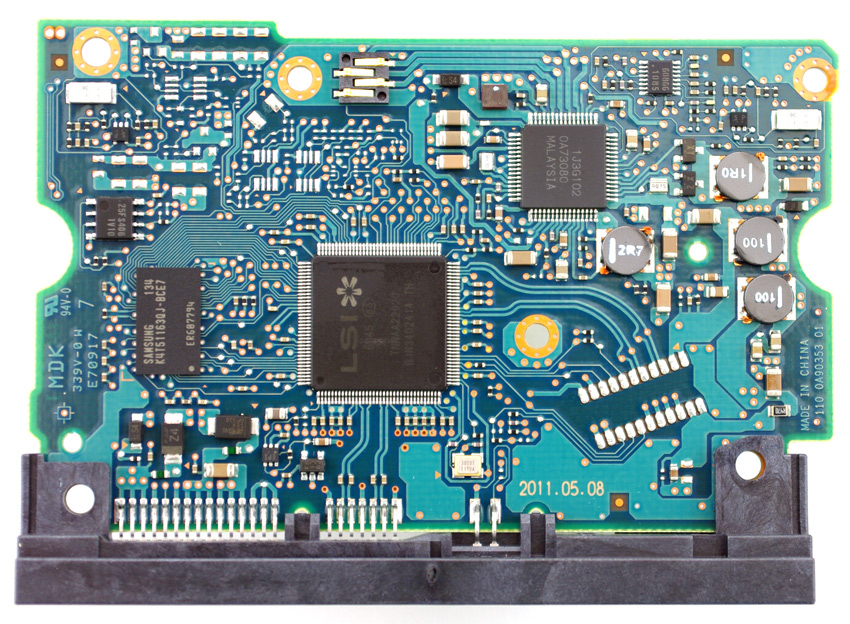 The data storage industry has been working to resolve 32-bit addressing limitations that historically limited maximum capacity to 2.2TB. Advanced Format allows for larger sector sizes than on 32-bit addressed drives, but as with any hardware advance it is important to be aware of compatibility considerations for matching the 7K4000 with older platforms. Most recent operating systems can address Advance Format drives like the Deskstar 7K4000, but in some cases storage drivers or system BIOS must be updated. The OS must support GPT partitions, and when booting from the 7K4000, must also support a UEFI BIOS.

Intel-based Macs and most recent Linux distributions support GPT boot and data drives. Windows Vista and Windows 7 provide GPT partition support, but only 64-bit versions of Windows will allow booting from a GPT partition. Windows XP (32-bit) does not natively support GPT or UEFI BIOS; more effort will be required to ensure that all components are capable of supporting high-capacity drives in a mixed or legacy environment.

According to Hitachi, the Deskstar 7K4000 has a maximum internal transfer rate of 205MB/sec. Synthetic data transfer benchmarks will see how close we can get to that theoretical limit.

The Deskstar 7K4000’s performance in the 2MB sequential transfer test demonstrates how much impact the spec boost between the 5K4000 and the 7K4000 makes, particularly from the doubled cache size. The 7K4000’s 161.22MB/s read score and 160.71MB/s write score place it at the top of its class for 2MB transfers, except for the WD Velociraptor 1TB which retains its dominance in that test.

Results are similar with 2MB random transfers, as the Deskstar 7K4000 manages a strong performance against all drives but the WD Velociraptor 600GB and 1TB drives. 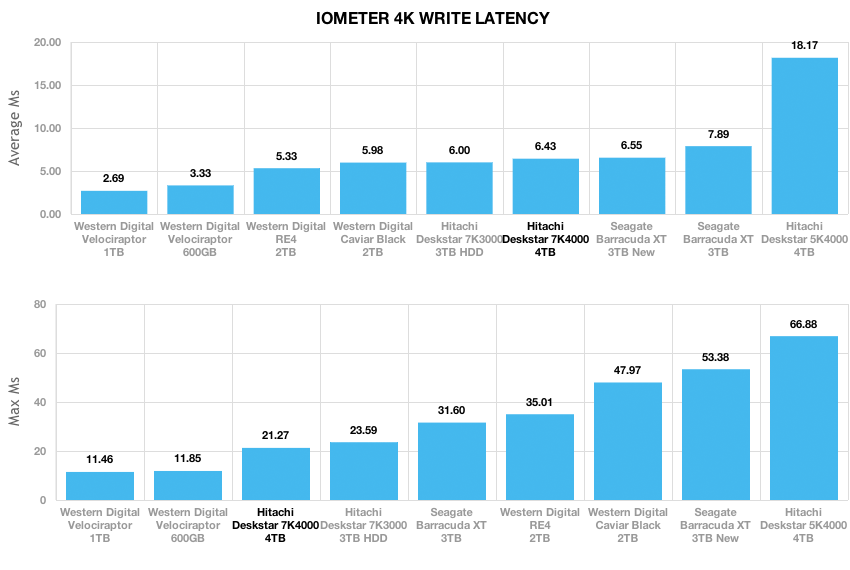 The 4K write latency test provides a better showing for the Deskstar 7K4000. It’s 6.43ms average seek time and 66.88ms maximum seek time match or beat most drives in the benchmark other than the WD Velociraptors.

CrystalDiskMark allows us to measure the difference in performance between the faster inner tracks of a hard drive platter and the slower storage on the outer half of the platter. We put the Deskstar 7K4000 up against the Deskstar 5K4000 for this benchmark to see how much of a difference the 7K4000’s boosted specs makes against a drive with a comparable 5-platter design. 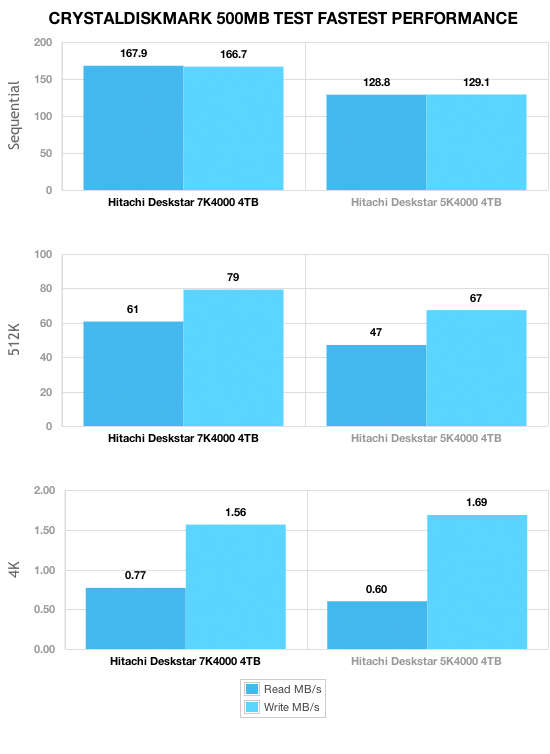 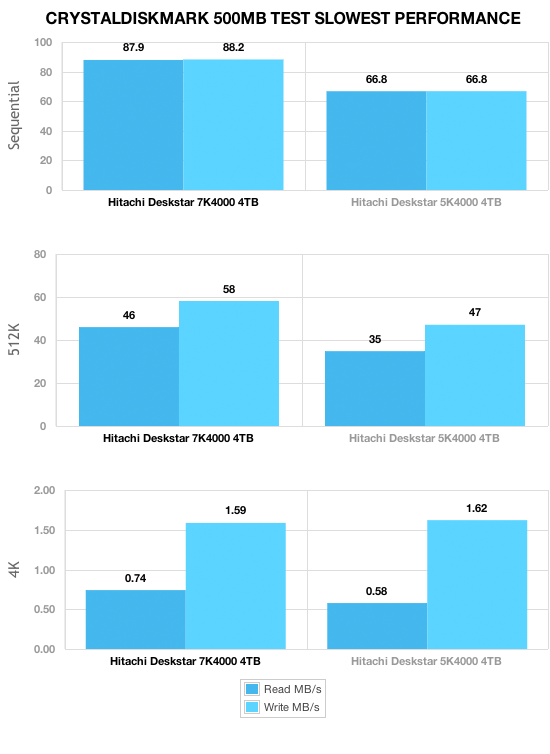 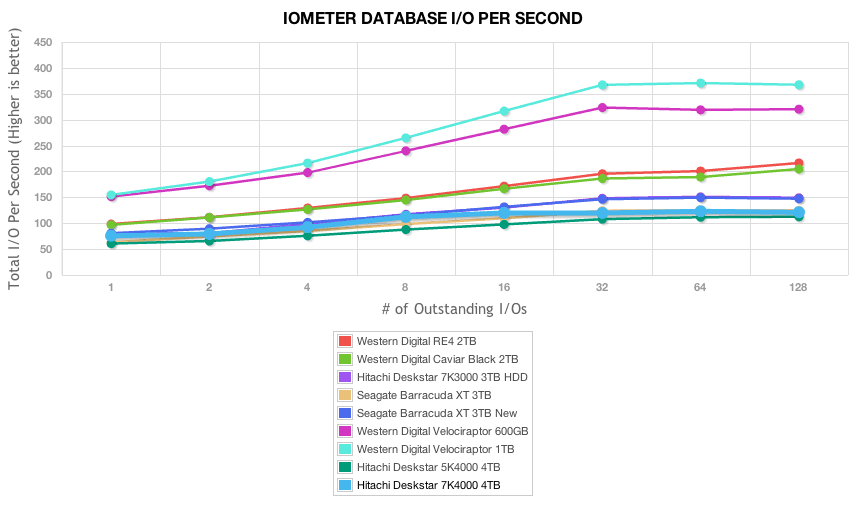 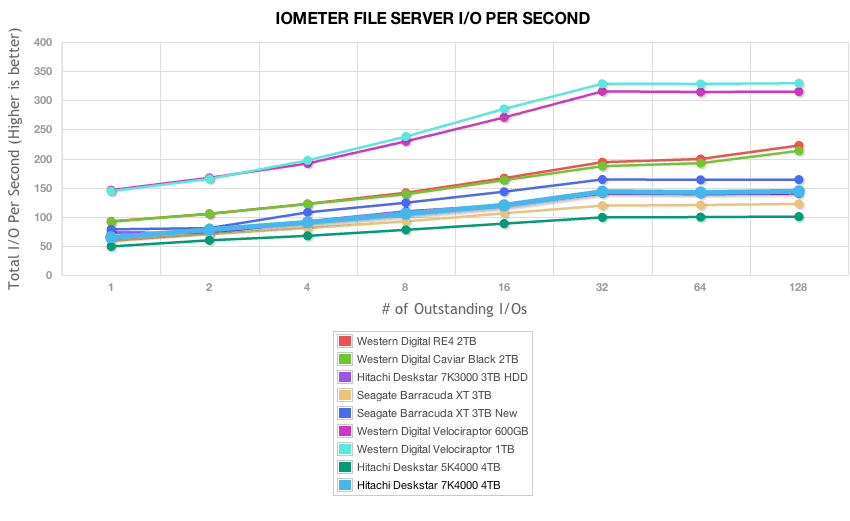 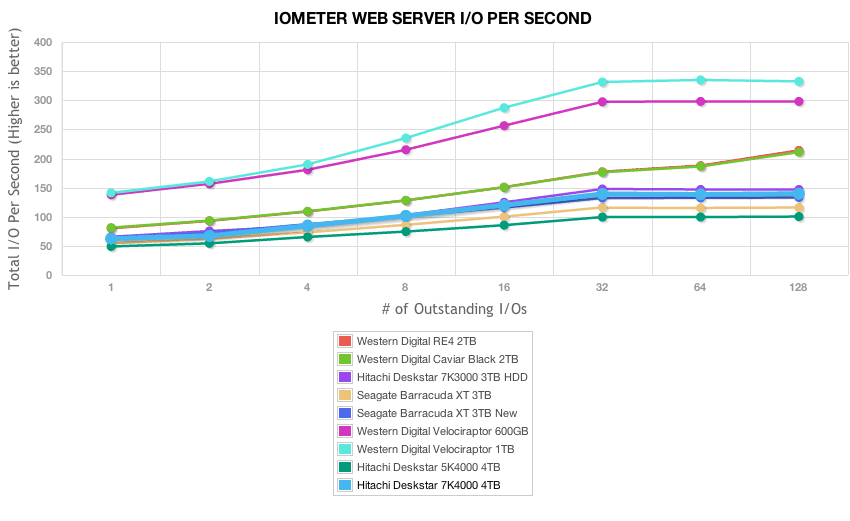 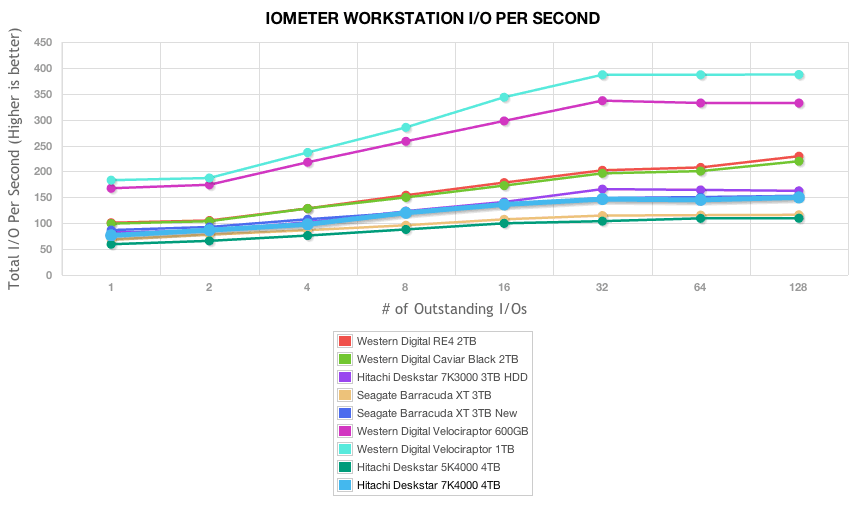 The IOMeter server profile benchmarks shed more light on the differences between the 7K4000 and the 5K4000. For these tests, we pitted both Hitachi drives against the WD Velociraptors, which remain the best performing drives on the market, even though the Velociraptors offer much lower capacity than Hitachi’s Deskstar line. In each test, the Deskstar 7K4000 maintains a decisive lead over the 5K4000, though neither Hitachi drive is able to compete toe-to-toe with the WD Velociraptors.

To get the best sense of the Deskstar 7K4000’s strengths and weaknesses for real-world use cases, we’ve set up benchmarks to evaluate its performance in two typical scenarios: home theater PC (HTPC) storage and gaming.

To keep results consistent with our Deskstar 5K4000 benchmarks, our HTPC trace includes: playing one 720P HD movie in Media Player Classic, one 480P SD movie playing in VLC, three movies downloading simultaneously through iTunes, and one 1080i HDTV stream being recorded through Windows Media Center over a 15 minute period. Higher IOps and MB/s rates with lower latency times indicate better performance in this trace.

The Deskstar 7K4000 improves on the 5K4000 in each of the three metrics, but does have trouble keeping up with the lower-capacity WD comparables. 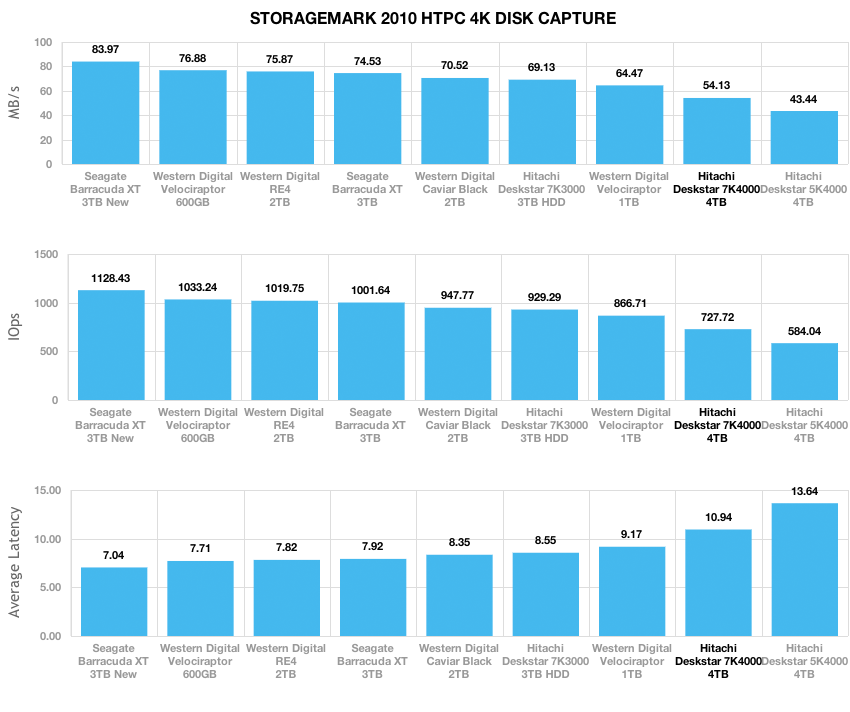 Gaming performance is most likely to be bottlenecked by read operations, so our gaming trace consists of 6% write and 94% read operations. The test is conducted on a Windows 7 Ultimate 64-bit system with Steam, with Grand Theft Auto 4, Left 4 Dead 2, and Mass Effect 2.

The 7K4000 has a better showing against other brands in the gaming trace, but these results still highlight the tradeoff between performance and the greater capacity the Hitachi Deskstar line offers. 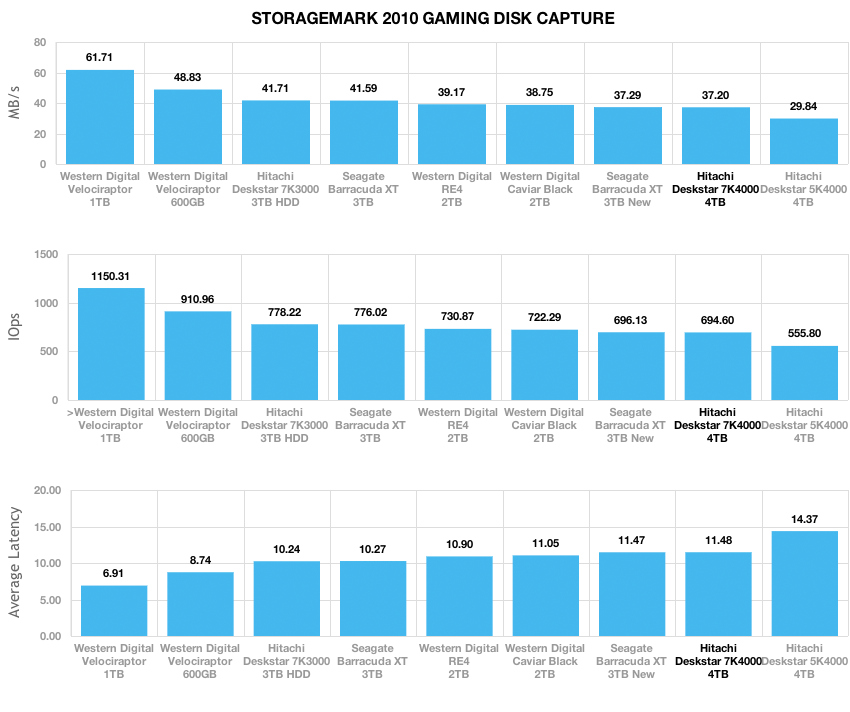 The Deskstar 7K4000’s power consumption is generally in line with the 5K4000 in our 5v tests. In the 12v tests, the 5K4000’s energy saving design does provide lower power usage across the board, at about half the power consumption of the 7K4000 in most categories.

The Deskstar 7K4000’s ample cache, 6GB/s interface, and 7200RPM rotational speed make it a strong contender for desktop storage and other high-demand consumer storage scenarios. Hitachi is a clear leader in the highest-capacity hard drive market, while also offering performance that should make customers think twice before insisting on technology like the WD Velociraptor that offer better performance at the cost of a lower maximum capacity.

Hitachi still maintains its dominance over the market for the highest-capacity hard drives with the Deskstar 7K4000; unless you need the fastest speeds available in an HDD, the 7K4000 provides an unbeatable data density and strong performance for most applications.