The Z1 G3 All-in-One Workstation allows users to tailor functionality (and cost) to their exact needs. Although HP designed the Z1 G3 to serve as a “budget-conscious” workstation (with a 21% reduction in cost compared to its predecessor, the Z1 G2 Workstation), it leverages components that equip professionals with the ability to handle a wide range of demanding tasks. The Z1 G3 Workstation comes standard with an Intel Core i5 CPU (3.2GHz, 6MB cache, 4 cores), an Intel HD Graphics 530 card, a 23.6″ UHD/4K display, 4GB DDR4 nECC SDRAM, and a 1TB SATA HDD (7,200 rpm), most of which can be upgraded prior to or following purchase.

The Z1 G3 All-in-One Workstation allows users to tailor functionality (and cost) to their exact needs. Although HP designed the Z1 G3 to serve as a “budget-conscious” workstation (with a 21% reduction in cost compared to its predecessor, the Z1 G2 Workstation), it leverages components that equip professionals with the ability to handle a wide range of demanding tasks. The Z1 G3 Workstation comes standard with an Intel Core i5 CPU (3.2GHz, 6MB cache, 4 cores), an Intel HD Graphics 530 card, a 23.6″ UHD/4K display, 4GB DDR4 nECC SDRAM, and a 1TB SATA HDD (7,200 rpm), most of which can be upgraded prior to or following purchase. 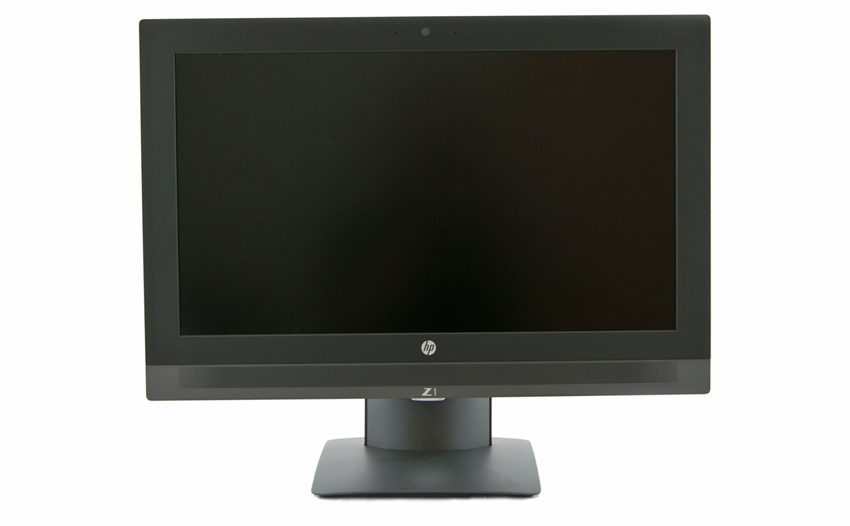 Although HP’s base Z1 G3 configuration is lacking in memory (considering the intended use case), users can install a maximum of 64GB SDRAM or they can purchase the Z1 G3 with up to 32GB of SDRAM from HP. HP also offers multiple CPU upgrade options (e.g., an Intel Xeon E3 3.6GHz processor with 8MB cache for $260), internal storage upgrade options (e.g., two 1TB PCIe SSD drives for $799 each), and a graphics card upgrade (e.g., NIVIDIA Quadro M2000M 4GB). Another key feature of the HP Z1 G3 is its use of dual Thunderbolt 3 ports (USB 3.1 type C), as well as six additional USB 3.0 ports and an SD 4.0 card reader. In terms of operating systems, the Z1 G3  can support Windows 7 Professional 64, Windows 10 Pro, Windows 10 Home High End, and RedHat Linux. Overall, the Z1 G3 Workstation represents a considerable upgrade from prior models, and is 47% smaller, 51% lighter, and 21% less expensive than its predecessor (the Z1 G2 Workstation).

All computing components are tightly packed inside the monitor, making it easy to move the entire system around the office. Though the Z1 does consist of a plastic build, it has a rugged, quality feel to it. The monitor features a larger-than normal-bezel, a look that might bother some. However, this is unavoidable due to all connectivity and functionality being packed into that one area. Overall, it is a nicely designed system that is well thought out. 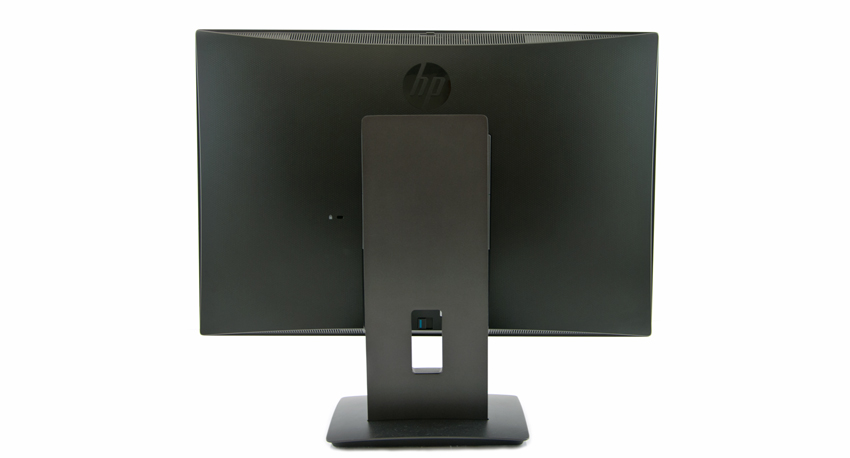 On the front of the Z1, all functionality is located along the top: the web camera (2MP HD 1080p), both left and right digital microphones, and the webcam activity LED. The DTS Studio Sound with stereo speakers are located across the bottom of the monitor.

Further functionality is located on the left side of the Z1 workstation, which includes the power button, two USB 3.0 ports, hard drive activity light, an SD 4.0 media card reader, and the headset jack. There are also two Type-C USB 3.1 connectors, which is starting to be used among many new devices like smartphones. These are all easily accessible. 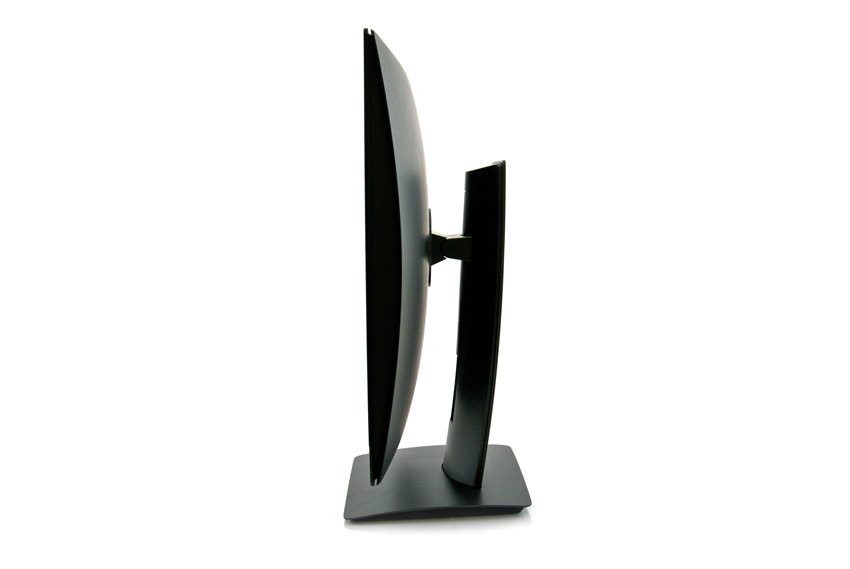 The rear panel is host to another four USB 3.0 ports and the RJ-45 (network) port. Also located on the back is the access panel release latch, power cord connector, Audio-out (headphone)/Audio-in (microphone) combo jack and the DisplayPort connector. You can install a wireless keyboard and mouse via the wireless dongles using in the internal USB Port, which allows you to leverage more of the external USB ports. 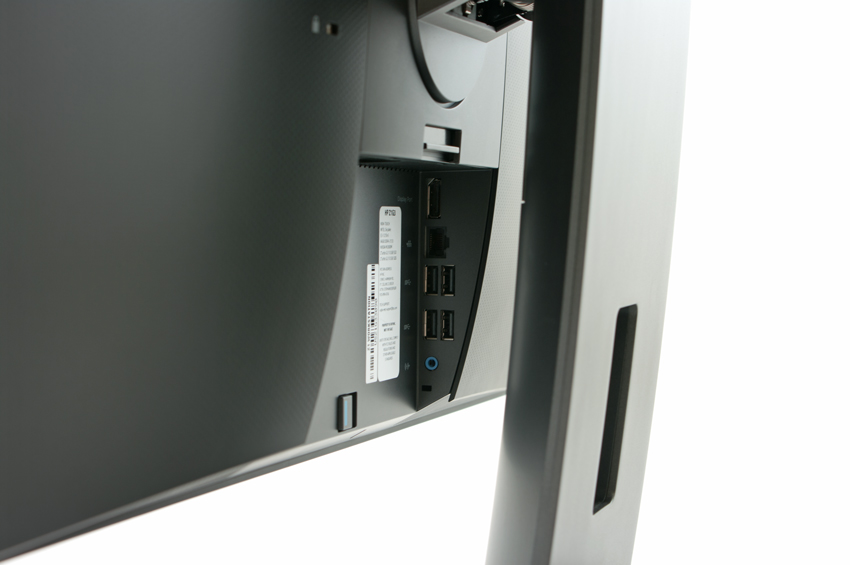 Out of the box, the Z1 is very easy to install. This space-saving workstation comes fully intact; all you need to do is connect the power cord, Ethernet cable, and other peripherals. The monitor is also quite maneuverable; you can slide the AIO’s base unit up and down and even pivot the display in portrait mode, which can be very useful in many use cases. 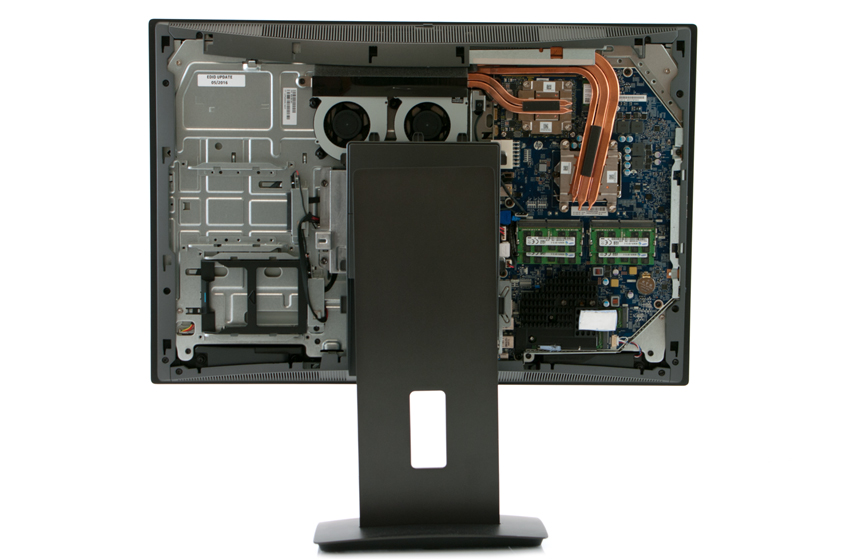 To open up the Z1 G3 workstation, simply slide the latch located on the bottom of the workstation (i.e. underneath the monitor) to the side and open the chassis. Inside, you will see a very compact, yet intelligently designed, arrangement of components–all of which can be accessed without tools. At the heart of the board is an Intel Xeon E3-1270 processor and the four SODIMM memory slots. Everything else is nicely placed around the board.

We will be testing the HP workstation using the NVIDIA Quadro M2000M (not to be confused with the desktop M2000 model), which is a lower-range graphics card for mobile workstations that features NVIDIA technologies such as VR Ready, 3D Vision Pro, Mosaic, nView Display Management and NVIDIA Optimus. The M2000M comes with 4GB of GDDR5 VRAM at 1250 MHz and boasts lower power and performance. It is also one of the less expensive models in the Quadro M Mobile family.

In order to test the HP Z1 G3 workstation, we will be using various benchmarks that demonstrate how the workstation performs in resource-intensive workloads and storage tests. We’ll also be examining the benefits of the HP Z Turbo Drives and documenting the performance of the dedicated NVIDIA Quadro M2000M graphics card. For comparison purposes, we’ve included the z640 data with both M2000 and M5000 GPUs. This isn’t meant to be a head-to-head comparison; the data simply provides context for the Z1.

The first benchmark is SPECviewperf 12, the worldwide standard for measuring graphics performance based on professional applications. SPECviewperf runs 8 benchmarks it calls viewsets, all of which represent graphics content and behavior from actual applications. The results of these viewsets include: CATIA (45.25), Creo (39.94), Energy (3.31), Maya (37.26), Medical (14.80), Showcase (22.20), Siemens NX (34.80), and Solidworks (78.84). Overall, the M2000M showed decent performance when using the NVIDIA M2000M graphics card. As expected, these results were not as strong compared to workstations like the Z640, as the Z1 leverages a lower-class graphics card.

To further test the performance of the NVIDIA Quadro M2000M video cards inside the HP Z1 G3, we will be using a benchmark that looks at several aspects of the ArcGIS program; however, we are most interested in the average of the drawtime, average frames per second (Average FPS), and minimum frames per second (Minimum FPS). Looking at drawtime, the Z1 showed impressive average time with 00:00:10.75. Average FPS gave us 72.60 and Minimum FPS showed the Z1 performing at 49.35.

While there are multiple categories PCMark looks at (including typical work usage, home usage, and creative usage) we will only be looking at Storage. The Storage benchmark tests the performance of any drives installed in the system. Specifically, it leverages traces recorded from Adobe Creative Suite, Microsoft Office and a selection of more popular video games to measure real-world performance differences between storage devices. Here, the Z1 hit an impressive PCMark score of 5093 with a bandwidth of 636.51MB/s.

Our next set of benchmarks will look at the performance of HP’s Z Turbo Drive G2 (512GB) inside the HP Z1. We will be comparing it to the following workstation and configurations. One important aspect of clarification is that the HP Z1 G3 was able to be tested as a secondary drive. As a result, speeds will look greater on the Z1.

When equipped with the Z Turbo drives, our 4K Write Latency tests showed the HP Z1 G3 with an average latency at just 0.0234ms and a maximum latency at 0.26ms. 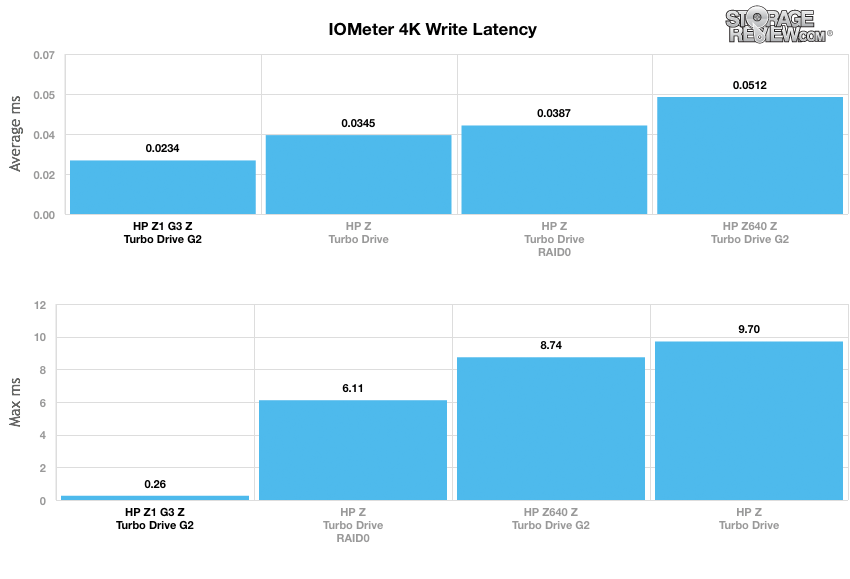 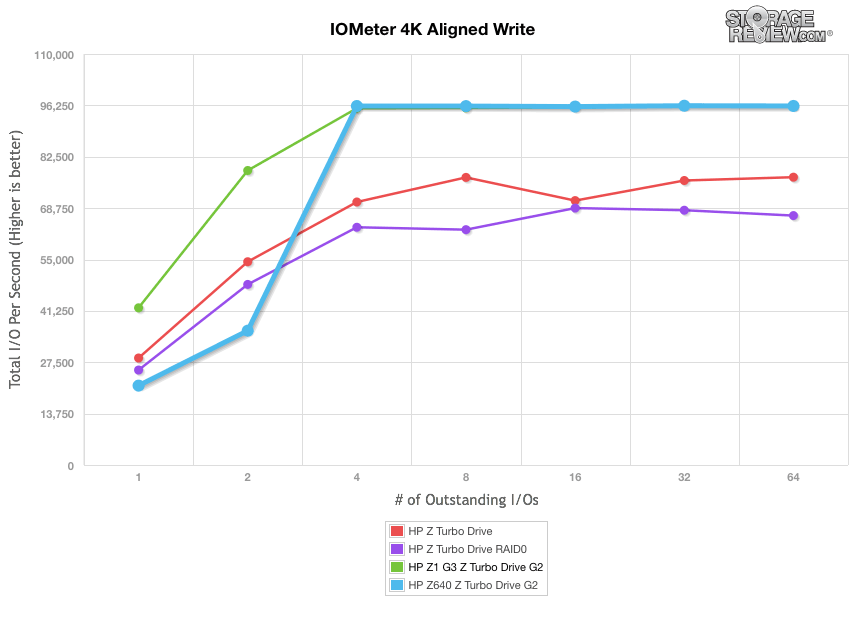 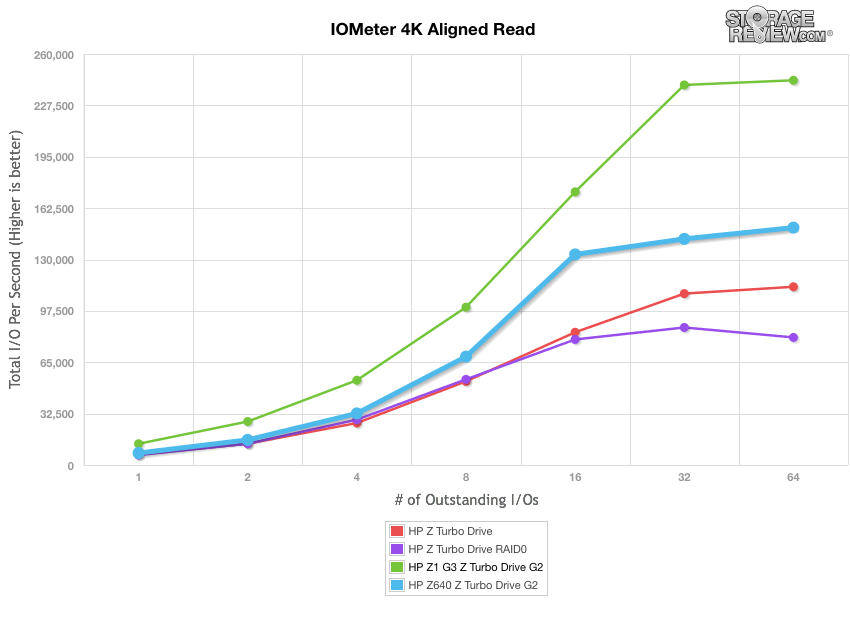 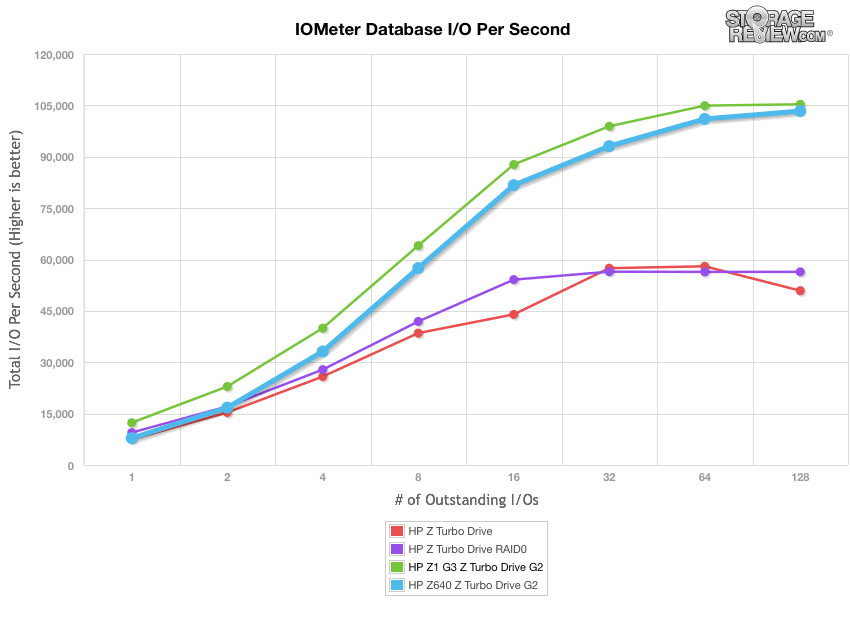 The next profile looks at a file server, with an 80% read and 20% write workload spread out over multiple transfer sizes ranging from 512-byte to 64KB. Results here told a similar story, as the HP Z Turbo drives posted similar performance, starting at 11,600.76 IOPS while peaking at 97,707.88 IOPS in the terminal. 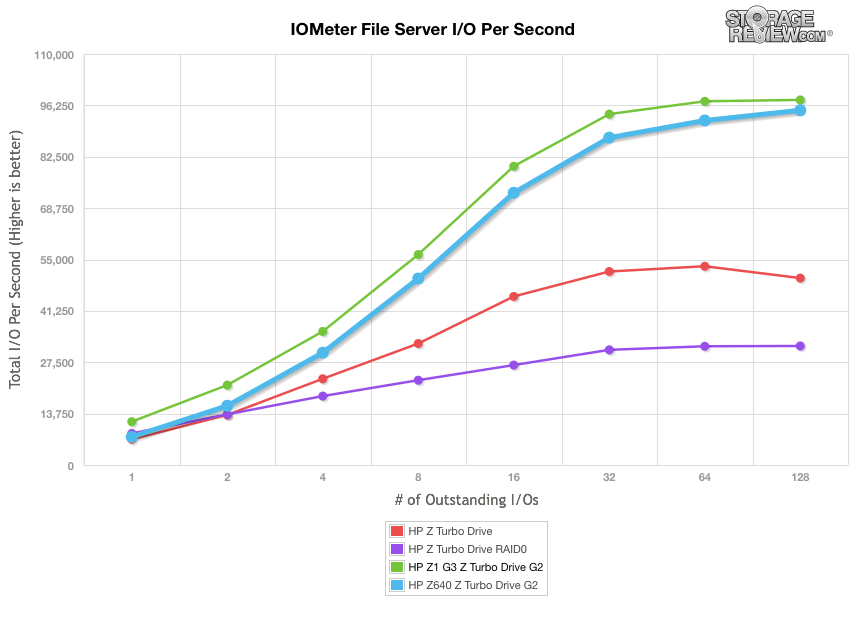 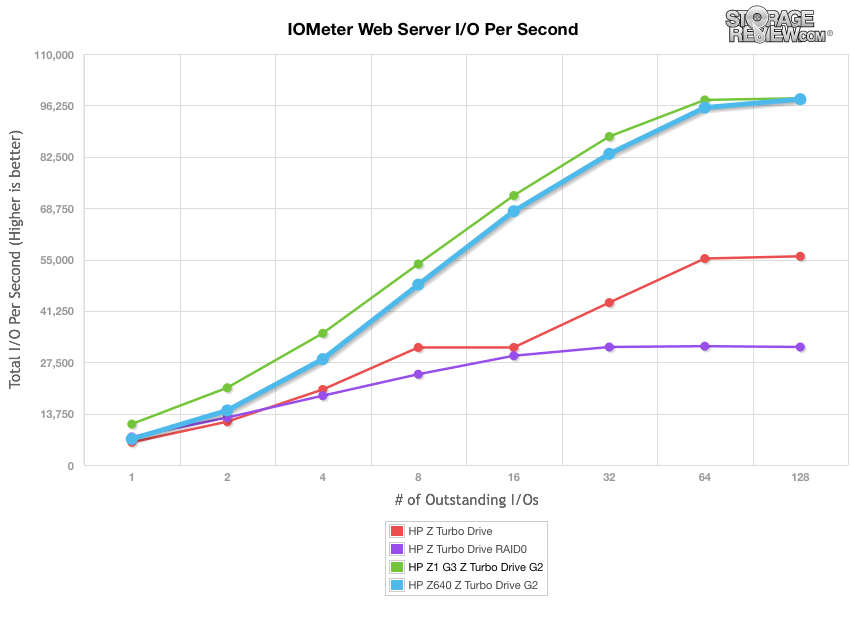 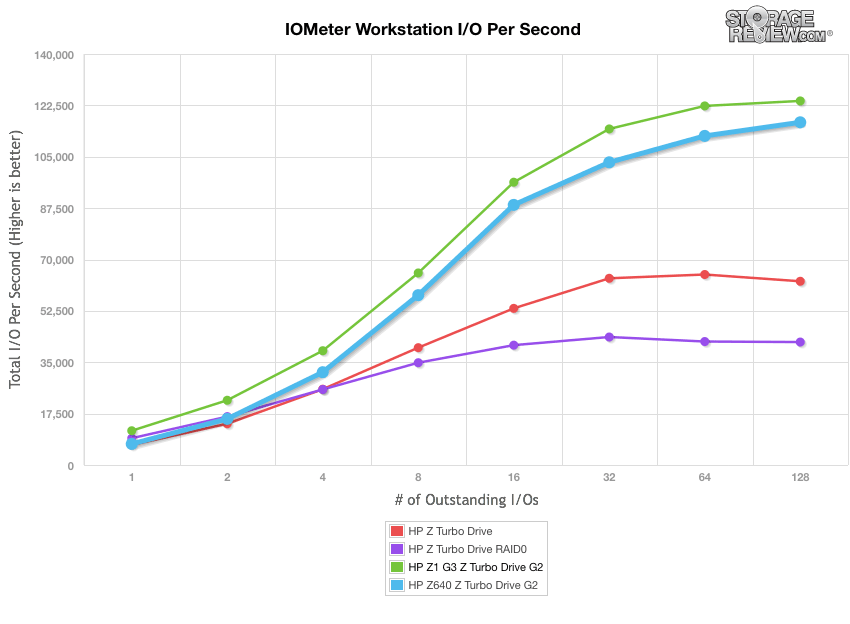 The HP Z1 G3 is the company’s third generation all-in-one workstation. In order to test the workstation, we equipped it with a Intel Xeon E3 processor and 64GB of ECC SDRAM in our build. We also leveraged the HP Z Turbo Drive G2 NVMe PCIe SSDs, adding a ton of power and flexibility to the Z1’s performance. Those looking for a lower price tag, however, will have the option of buying the standard package, which includes the Intel Core i5 CPU (3.2GHz, 6MB cache, 4 cores comes standard), Intel HD Graphics 530 card, a 23.6″ UHD/4K display, 4GB DDR4 nECC SDRAM, and a 1TB SATA HDD (7,200 rpm). Like all HP workstations, most of these components can be upgraded during or following the purchase. Its tool-less design and easy-to-access build makes this a seamless process, so you will always be able to upgrade as needed without much hassle.

To determine an overall-performance analysis of the HP Z1 G3 during resource-intensive and casual workloads, we put it through a range of different benchmarks. We also looked at the performance of its equipped NVIDIA M2000M mobile graphics card. During the SPECviewperf, the M2000M was noticeably slower than its desktop brethren. For example, it demonstrated lower performance in CATIA (45.25), Creo (39.94), Energy (3.31) compared to the M2000’s CATIA (69.36), Creo (62.82), Energy (4.07) viewsets. That being said, it performed as expected (it is, after all, a less-equipped graphics card) and will certainly meet the needs of any all-in-one application. Our results for the SPECwpc tests told a similar story, as the M2000M NVIDIA card showed decent overall results, but again, was not as performance driven as the desktop M2000 model. During our PCMark test, the Z1 G3 gave us impressive scores of 5,093 with a bandwidth of 636.51MB/s. And with our Esri benchmark, the Z1 was abole to hit a drawtime of 10.746 seconds, with an Average FPS of 72.6, and a Minimum FPS of 49.35.

To demonstrate the performance of HP Z640’s Z Turbo drives inside the Z1 G3, we put it through a series of synthetic benchmarks that look at a variety of different workloads and file types. It should be noted that we tested the Z Turbo SSD as HP Z1’s secondary drive, meaning the speeds looked greater compared to the other tested workstation. That being said, the overall performance of the Z1 was impressive. For example, our 2MB sequential performance showed Z Turbo drives with 1,891.01MB/s read and 1472.71MB/s write, while random reads and writes of the same test measured 1,479.55MB/s and 1406.12MB/s, respectively. During our aligned read and write, the HP Z Turbo drives boasted a range of 13,426.03 IOPS to 243,369.88 IOPS, and 42,072.76 IOPS to 96,134.86 IOPS, respectively. The Z1 also showed fantastic performance during our server mixed-workloads when equipped with the HP Z Turbo NVMe drives.

The HP Z1 G3 is one of the best all-in-one workstations on the market, offering a seamless set-up process with a decent amount of customization, including NVMe SSD options capable of blistering speeds.