Intel SSDs are best known for providing good performance, compatibility, and reliability. We take the company’s latest, the 510 series, and put it in RAID levels 0, 1, 5, and 6, plus a special four-drive RAID 0 configuration and achieve some astonishing performance numbers. To get an idea of just how fast these drives are, check out our in-depth RAID review where we reach speeds in excess of 1,100MB/s read and write.

Intel SSDs are best known for providing good performance, compatibility, and reliability. We take the company’s latest, the 510 series, and put it in RAID levels 0, 1, 5, and 6, plus a special four-drive RAID 0 configuration and achieve some astonishing performance numbers.

We already reviewed the Intel 510 as a single drive here. Unlike Intel’s current mainstream SSD, the X-25M, it uses a Marvell 88SS9174-BKK2 controller instead of the company’s own yet uses Intel’s 34nm NAND MLC flash memory chips. The 510 series features a 6Gbps SATA III interface and is available in 120GB and 250GB capacities; we’ll be running our tests with the 250GB version. The formatted capacity of the 250GB drive is 232GB.

Intel also updated the exterior appearance of the drive. The 510 features a sleek metal alloy case measuring 9.5mm in height, which is notable since the X-25M was just 7mm. The 510 is the same size as regular notebook 2.5-inch hard drives, in other words. 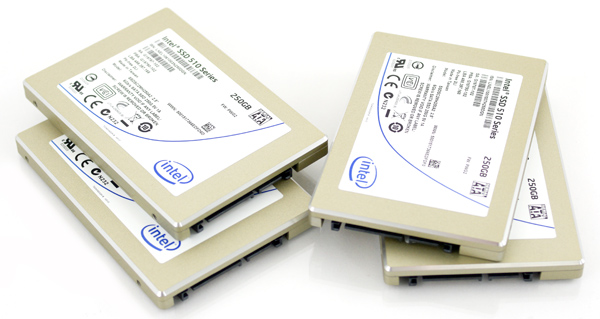 While no current single SSD can touch the bandwidth offered by the SATA III 6.0Gbps standard, several of them in RAID can get much closer as our tests will demonstrate.

The Intel 510 series SSD does not have class-leading performance; rather, this is aimed at people looking for a fast, reliable SSD at an affordable price. As our 510 SSD review showed, it even falls behind its predecessor, the X-25M, in several benchmarks; and it is a long way from catching up to the latest SandForce-based SSDs. That said, let’s get to the benchmarks. 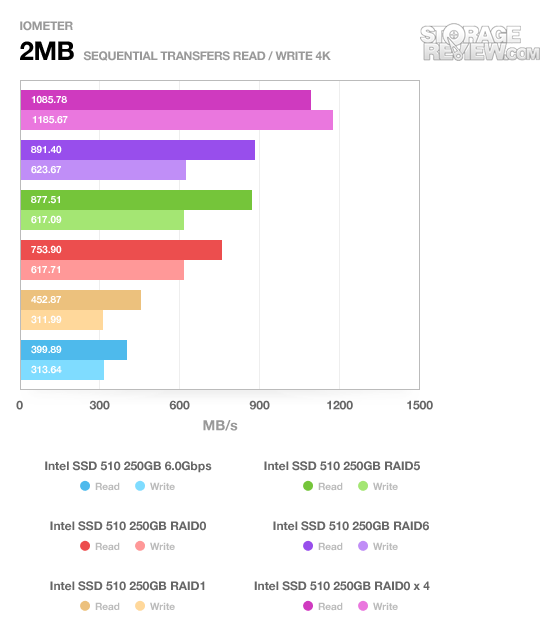 The performance gains with a RAID setup are promising off the bat. RAID 1, which mirrors data across drives for fault tolerance, has predictably increased read speeds but the same write speeds as a single drive. At the extreme end, we have the four-drive RAID 0 array, which stripes data across the drives and has no fault tolerance (meaning, if one drive fails, the whole RAID array is toast) providing over 1GB per second read and write speeds! 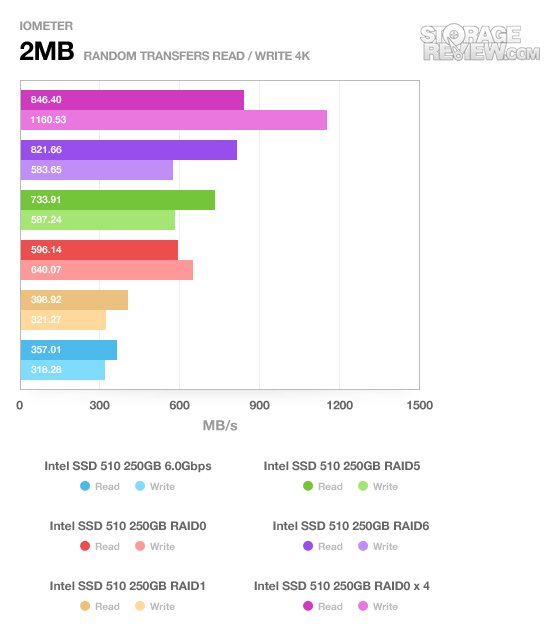 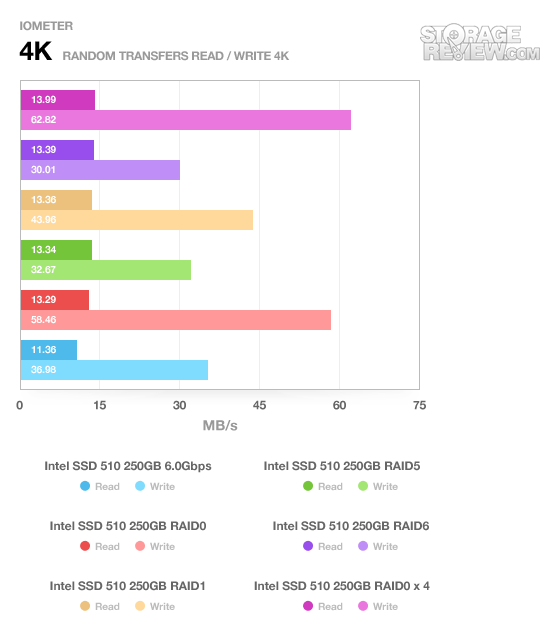 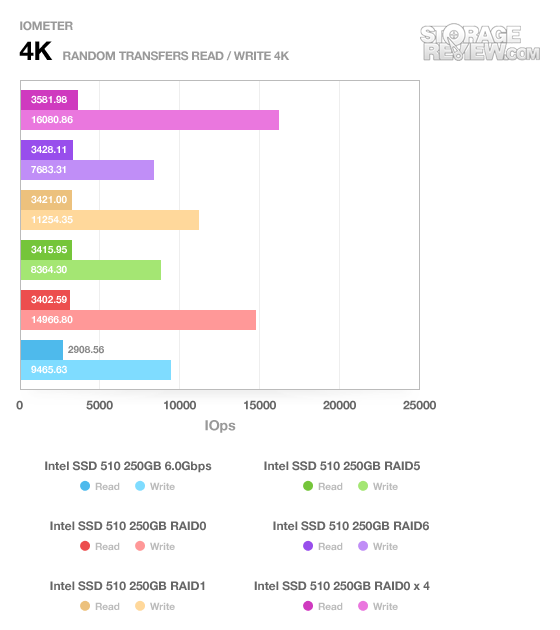 Moving to a smaller file size provides an even better glimpse at real-world performance of the drive. Not the linear performance scaling we saw with the 2MB benchmarks is gone; the demands of running many drives in a RAID array on the hard drive controller take their toll; this is especially evident on RAID 5 and 6. The four-drive RAID 0 array is barely 20% faster than the single drive in reads (indicating there may be a saturation point) but easily outdoes the single drive on writes. 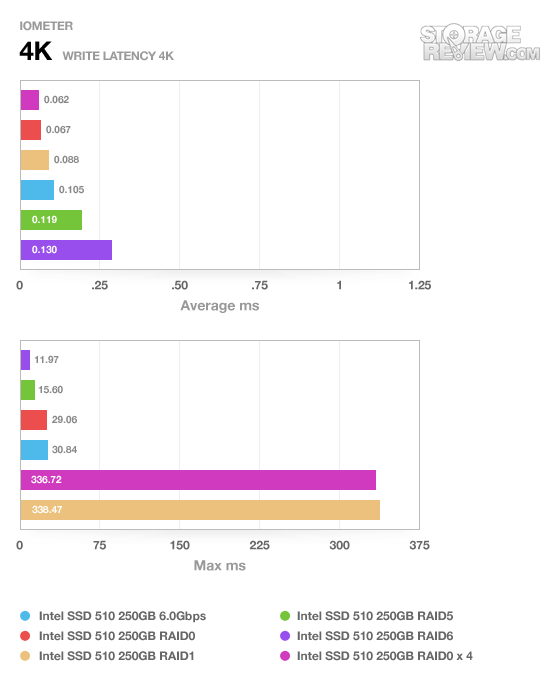 These last four synthetic benchmarks use standardized server profile tests to simulate performance in a server environment. The queue depth increases from left to right; performance should scale accordingly. 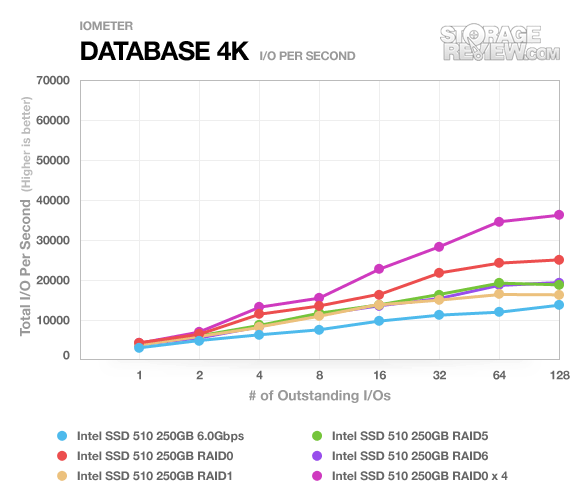 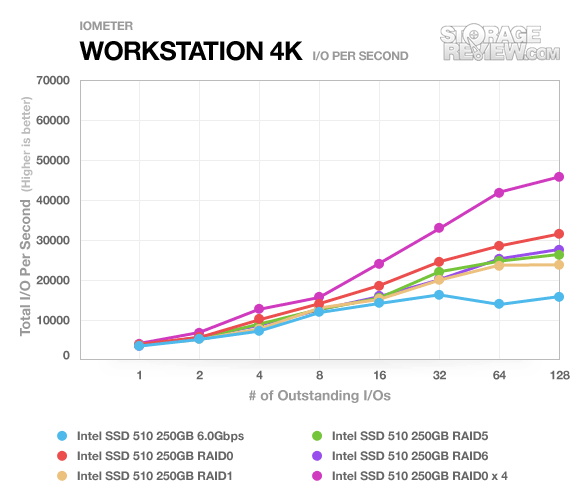 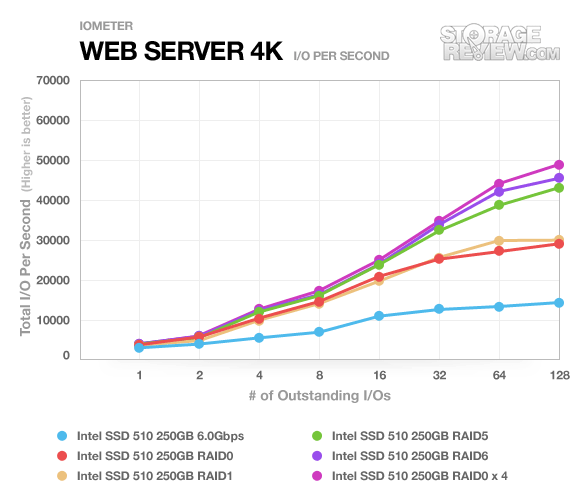 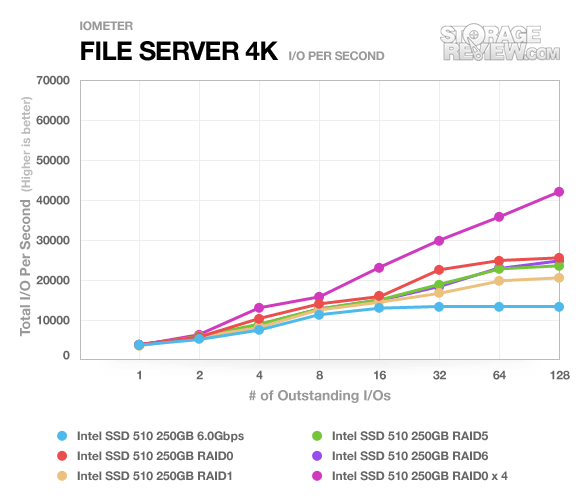 Synthetic benchmarks are just that – synthetic, and not necessarily the best indicator of how the drives will perform in the real world. To do that, at StorageReview we have our own custom-scripted benchmarks that most accurately simulate real-world performance. We have several different benchmarks including an HTPC disk capture, a Productivity benchmark, and a Gaming benchmark. 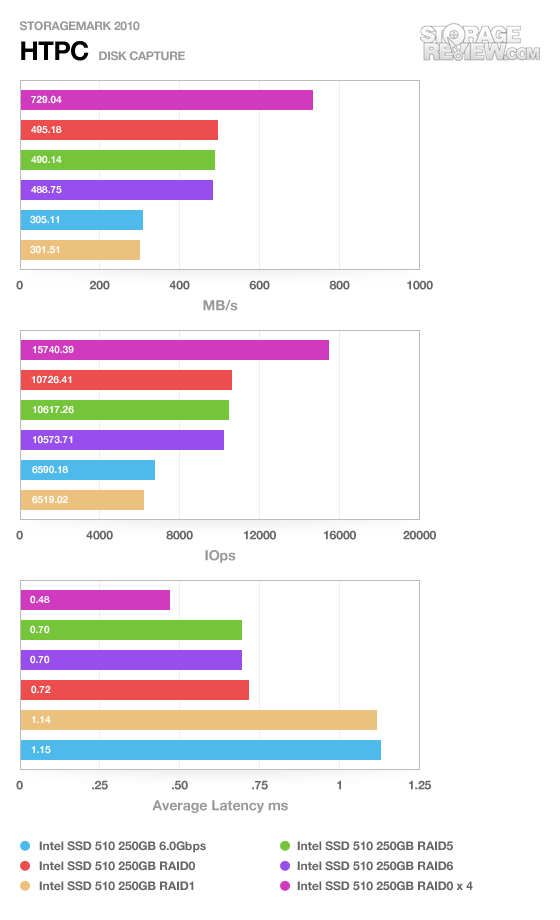 The single drive and RAID 1 numbers are more or less identical; this benchmark favors write speeds so the RAID 1 setup is actually at a slight disadvantage. The standard RAID 0 setup, which has fallen slightly behind the RAID 5 and 6 setups in the other benchmarks, is able to match them as it is best suited to fast write speeds. 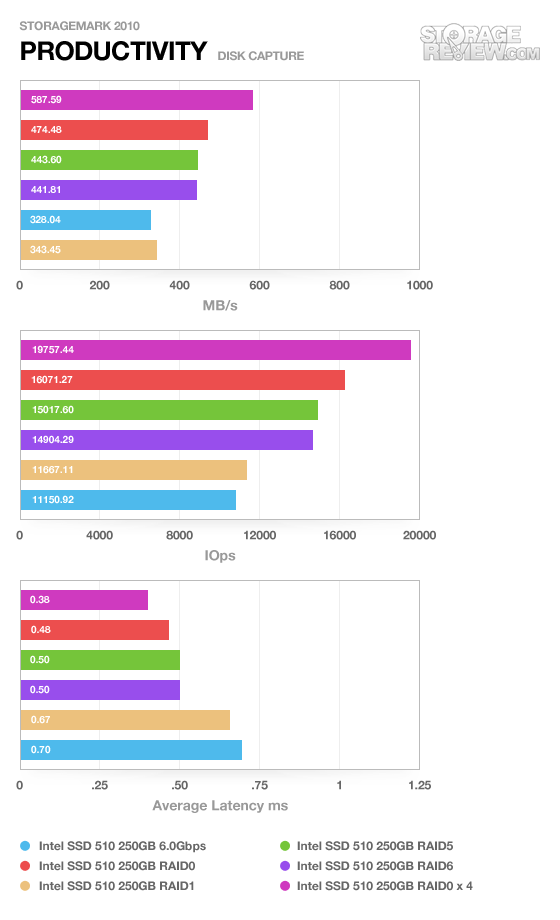 Our productivity benchmark also stresses write performance. The four-drive RAID 0 array has the best performance but not by much of a margin – at least compared to the leads it enjoyed in other benchmarks. Its average latency is excellent, however, about half that of the single drive; low latency directly relates to the responsiveness of the drive in a real-world scenario. 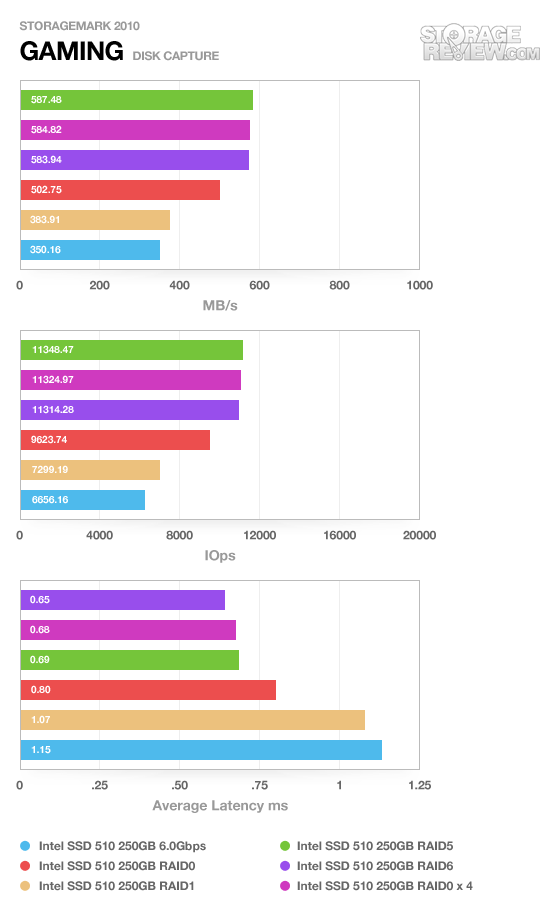 The Intel 510 series SSD comes with an industry-standard three-year warranty, matching just about all of its competitors. As an added bonus (and while not exactly related to the warranty), Intel makes its specialized SSD Toolbox software available for easy management of the drive. This is a great tool and not many other manufacturers offer something like this. Intel SSD Toolbox allows users to securely erase the drive as well as optimize and tune the drive for the best performance.

The Intel 510 series SSD performs predictably and reliably in the variety of RAID modes we evaluated – levels 0, 1, 5, 6, and even a four-drive RAID 0 array. While the 510 is not the fastest SSD by itself, two drives in RAID 0 will easily outpace any single SSD currently on the market. Because of the 510’s linear scalability, this drive is easy to recommend to users looking to put the drive into any type of RAID array.

The Intel 510 series SSD performs like a champ in various RAID configurations making it easy to recommend to enthusiasts.