OWC offers the Mercury Elite Pro Dual Mini in a variety of hard drive and SSD configurations, as well as in a bare enclosure form. The hard drive configurations run from 640GB to 2TB in total drive capacity and  carry retail prices of $199 to $419. The SSD versions include dual Mercury Electra 6G SSDs in 120GB, 240GB or 480GB capacities and range from $439 to $1719. The enclosure on its own retails for $77.99 or $89.99 if you want the optional software kit. If ordered with drives, OWC gives buyers the option of having the unit pre-configured in RAID0 or RAID1. 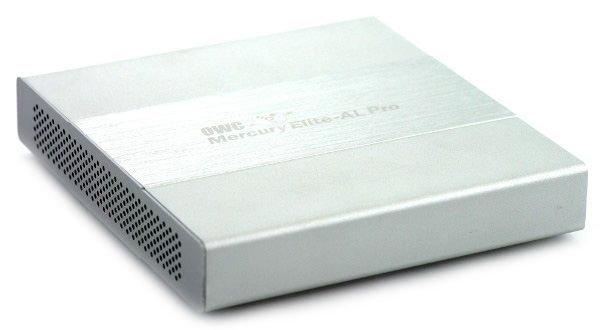 As usual, the aluminum enclosure body is rigid and solid, which is by now a common refrain when we talk about OWC’s enclosures. There’s only very minor flex at the dead center of the case, under extreme pressure. Under normal and probably abnormal conditions, the enclosure will be more than adequate to shield the drives inside.

The front of the enclosure is essentially a large vent, allowing heat to escape from the passive cooling system. There are two access lights behind the grille. The rest of the body is all aluminum, with subtle OWC product branding on the top. The bottom has four silicon feet and product information stickers.

The rear of the enclosure features two FireWire 800 ports, along with single FireWire 400, USB 2.0 and eSATA ports. OWC includes a power switch, which we always enjoy, and a DC power jack for an adapter that’s optional. The enclosure is bus-powered, but to use eSATA or USB, you will need to connect a FireWire 800 cable or use a power adaptor. 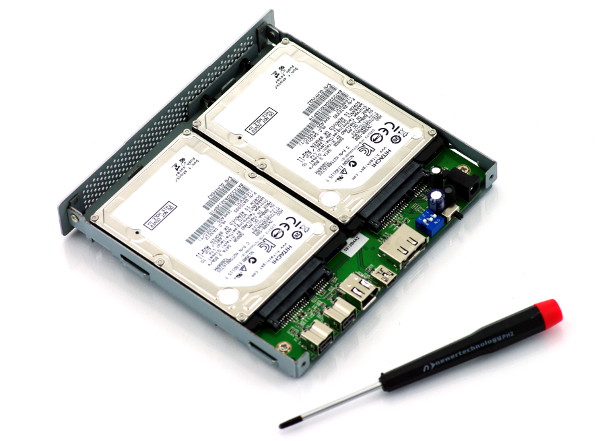 The drive tray inside is held in with two Philips head screws. Removing them allows the tray to slide out from the enclosure. From there users can either add or modify drives, or alter the RAID settings. By default the unit will ship in RAID0 or RAID1, but with a set of switches, the user may reconfigure the drive mode. Span and single drives mode are also available, although they are not preferred over the standard RAID options.

We tested the OWC Mercury Elite Pro Dual Mini with two sets of paired drives to measure both RAID1 and RAID0 performance over eSATA. The first set is the factory-supplied Hitachi 7K500 mobile hard drives and the second set is two 200GB Intel 710 SSDs from our lab. For a quick intro to RAID, RAID1 mirrors both drives so that in the event one drive fails, your data can still be accessed on the other drive. RAID0 stripes the data across both drives, effectively doubling performance, as well as the capacity… but with twice the risk of failure and data loss.

OWC has a powerful and compact device on its hands with the Mercury Elite Pro Mini. It’s easy to use, especially if you buy it with drives where the RAID is already configured. It’s also very durable, the enclosure can be tossed in a bag without much risk of damaging the case or ports, as nothing protrudes from the enclosure. For photographers or those who otherwise need ready and reliable access to many or large files on the go, this device solves a lot of problems. Filling it with either SSDs or faster 7200RPM 2.5-inch hard drives, it can easily saturate your eSATA or FW-800 interface… something not every external enclosure can claim.

There are few, if any, downsides to the Elite Pro Dual Mini. Perhaps it’s a touch heavy, but on the flip side the durable case adds another layer protection to the valuable data stored inside. Another issue could be a lack of display, but a product already exists with that in mind called the NewerTech Guardian MAXimus Mini, for which OWC is the master distributor. Those are nits at best, considering how well the enclosure excels at its designed task.

If you are in the market for a fast and portable RAID0 or RAID1 enclosure that doesn’t need external power, the OWC Mercury Elite Pro Dual Mini fits the bill perfectly.