The Pyro SE is the latest SSD from Patriot and is a new and improved version of the Pyro, both of which are powered by SandForce’s SF-2281 processor. The main difference between the two is that instead of asynchronous NAND, the Pyro SE is equipped with 25nm synchronous MLC NAND, which can deliver up to 550MB/s read and 520 MB/s write speeds and a maximum of 85,000 IOPS.

The Pyro SE is the latest SSD from Patriot and is a new and improved version of the Pyro, both of which are powered by SandForce’s SF-2281 processor. The main difference between the two is that instead of asynchronous NAND, the Pyro SE is equipped with 25nm synchronous MLC NAND, which can deliver up to 550MB/s read and 520 MB/s write speeds and a maximum of 85,000 IOPS.

Even with this improved performance, Patriot has maintained its competitive pricing policy with the Pyro SE and still offers one of the best price-per-performance ratios on the SSD market. The Pyro SE is available in three capacities: the 60GB, 120GB and 240GB. It’s hard to resist a $110 USD price tag, but most enthusiasts will likely pass on the 60GB Pyro SE in favor of the 120GB and 240GB models. The 240GB Pyro SE currently goes $469.00 on Newegg (or $409.00 after mail-in rebate), which is in line with most SSDs in that capacity range.

Today we will be pitting the Patriot Pyro SE 240GB against the OCZ Vertex 3 240GB Max IOPS, Plextor PX-M3S 256GB, Corsair Performance Pro 256GB (the only SDD with a Marvell-based controller in the line-up), and the Corsair Force GT 240GB, which will be its main competitor. We previously reviewed the Force GT and were very impressed with its blistering speed and consider it one of the best performing SandForce-based SSDs available today. Needless to say, the Patriot Pyro SE has some stiff competition. 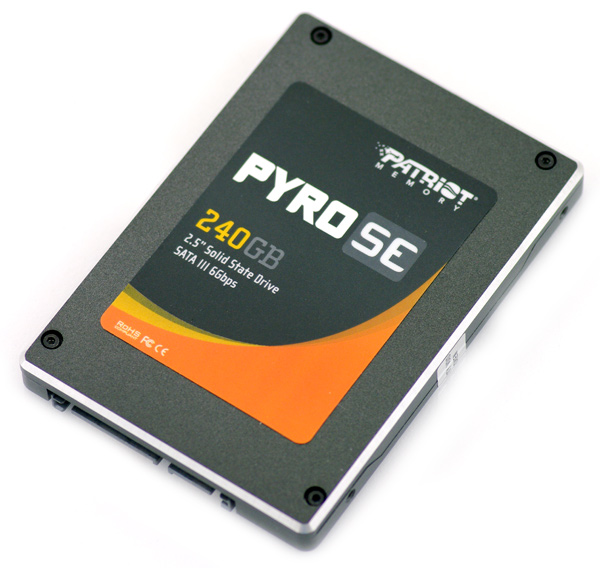 On the front-side of the SSD, the Patriot Pyro SE looks very similar to the WildFire and Pyro series SSDs except for the orange and black label on top. The outer casing is made out of cast aluminum and is held together with hex four screws. Because of the drive’s textured matte black, gunmetal finish, it doesn’t show fingerprints or smudges like other surface types would. 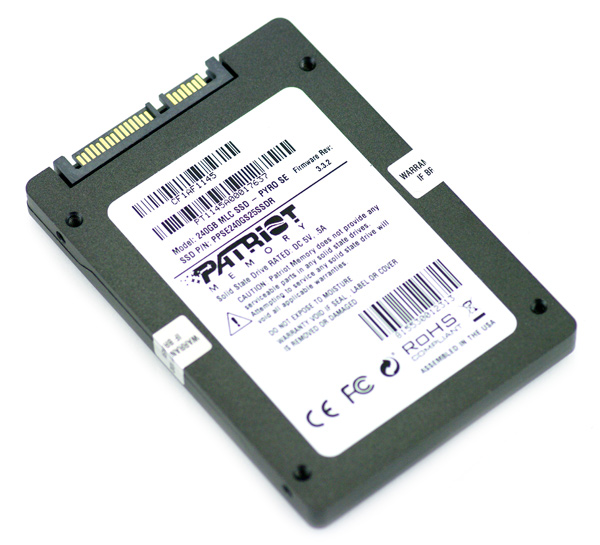 A warranty label is applied over the split in the casing.

The side of the drive shows off the mounting points so you can attach this drive to sleds and hot-swap bays. The screws that hold the case together are all located on the bottom of the SSD.

Like most SSDs, taking the Patriot Pyro SE apart is very simple, but voids your warranty in the process as stated on the sticker. To split it apart, you simply remove the four small allen head screws from the perimeter of the drive and then use a fingernail to split the case open. 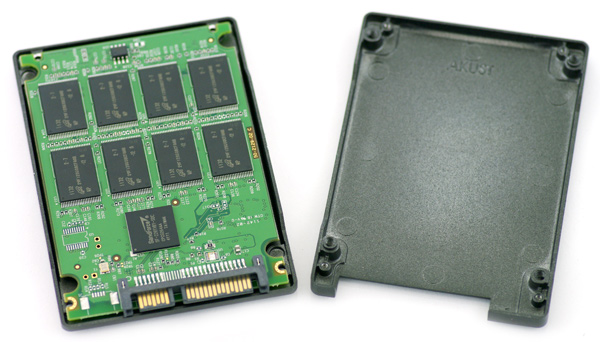 With the drive apart, you can see the top side of the circuit board, loose once the top cover is removed. As you can see below, at the heart of the Patriot Pyro SE is a SandForce SF-2281 processor. 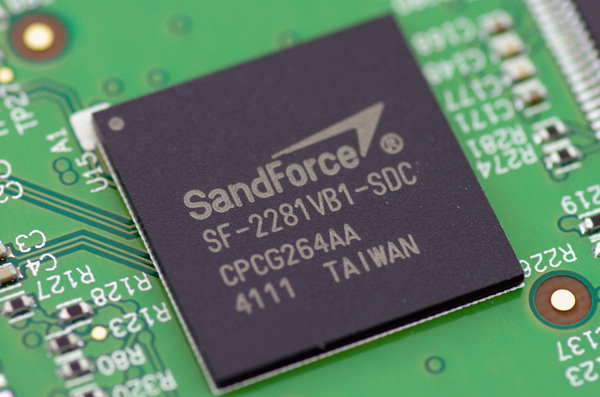 The 240GB Patriot Pyro SE SSD has sixteen 25nm Micron MLC synchronous NAND pieces. The board layout has eight on each side of the PCB. 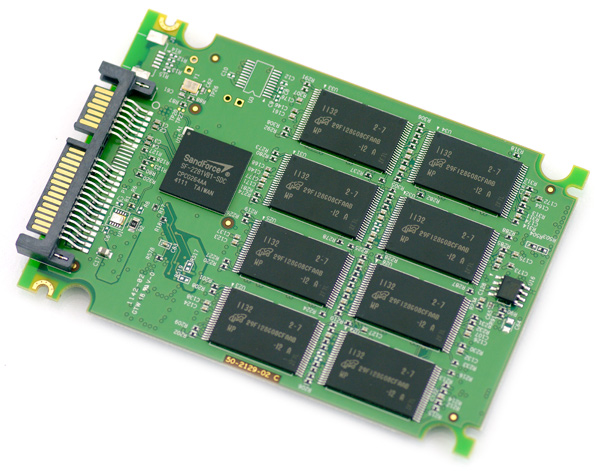 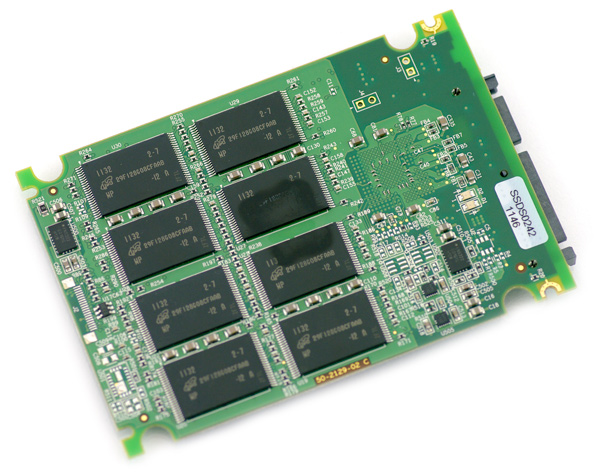 These synthetic benchmarks do not necessarily represent real-world performance; rather, they test specific areas of the drive such as maximum read and write speeds to show how well the drive can perform on its best day. 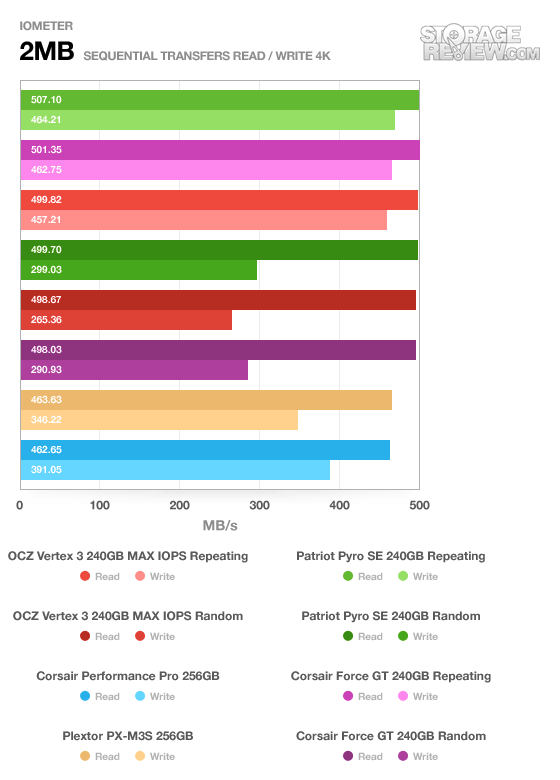 The 2MB sequential transfer benchmark represents how fast the drives can transfer large files. We can see that the Patriot Pyro SE Repeating performed very well here, leading the pack with a 507.10MB/s Read and 464.21MB/s write speeds. The random benchmark uses incompressible data; SandForce controllers like the one the Pyro SE use compress data to improve performance (less reading/writing). Not all data can be compressed. 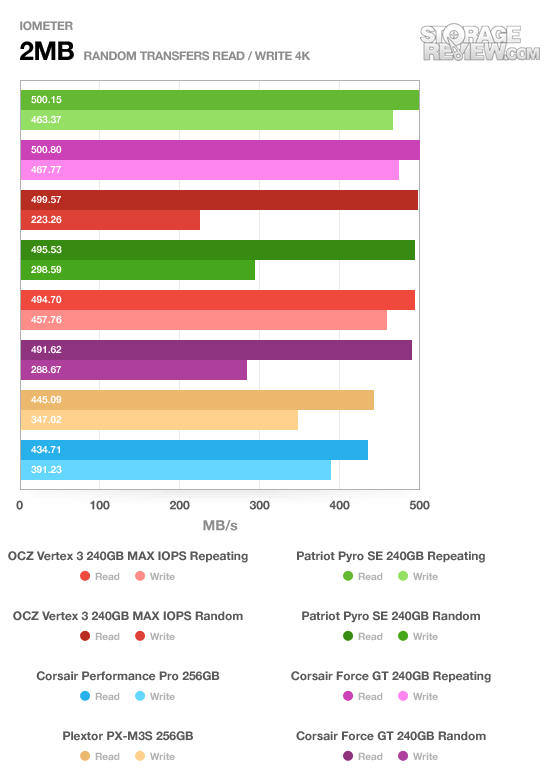 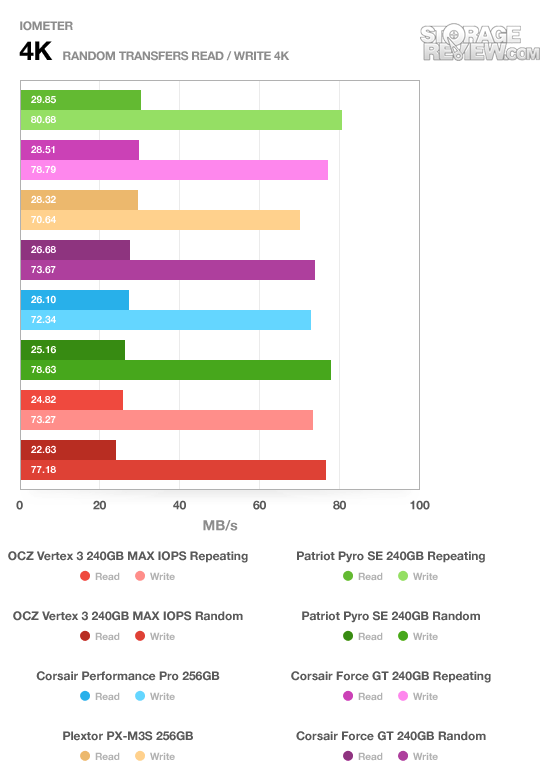 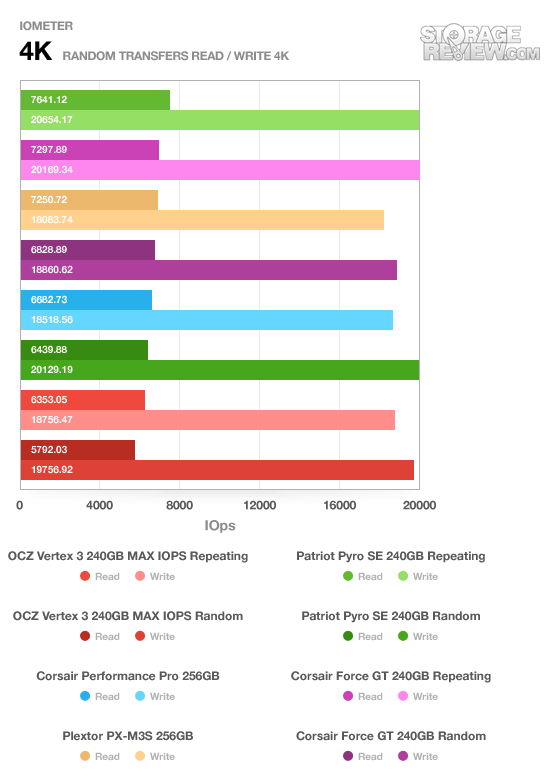 Next we look at 4K random read and write speeds as the queue depth increases up to a level of 64. 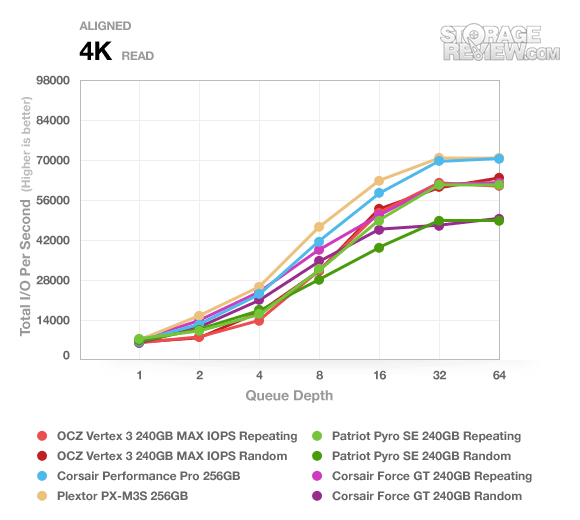 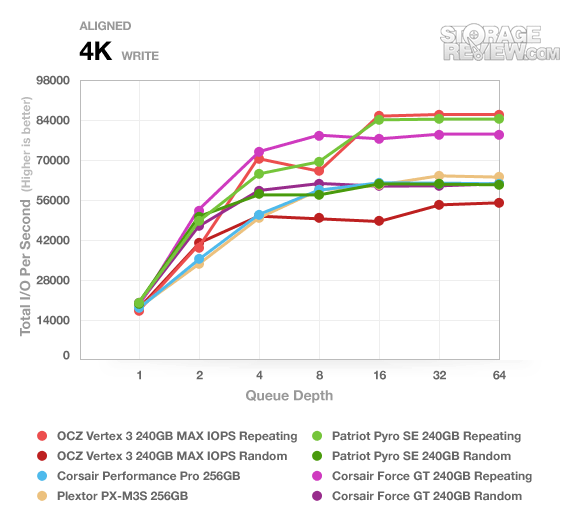 IOPS – or input/output operations per second – test the SSD’s controller. The Patriot Pyro SE (Repeating) continues to perform very well with a read and write speed of 29.85MB/s and 80.68MB/s respectively; the Pyro SE Random reading also had an impressive write speed of 78.63MB/s. 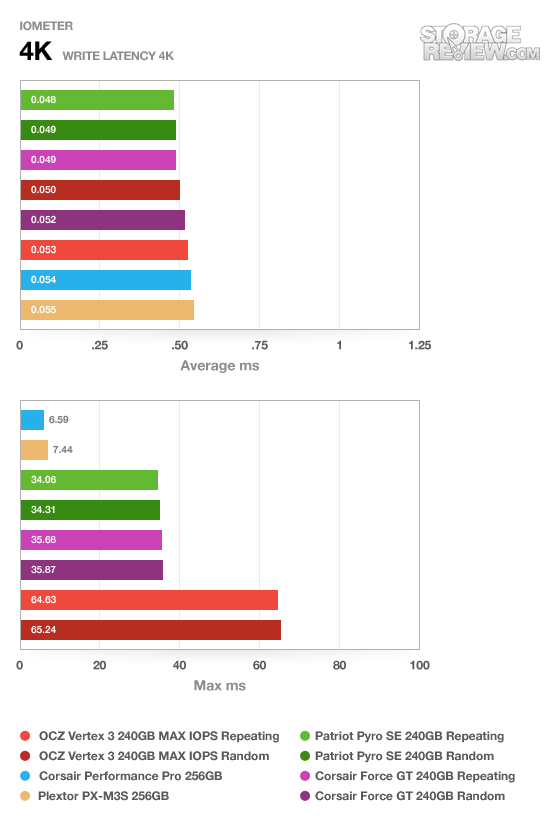 Both the Pyro SE Repeating and Random had very good ms latency, narrowly beating out the Corsair Force GT. They did, however, see a spike in max ms with a reading of 34.31ms. 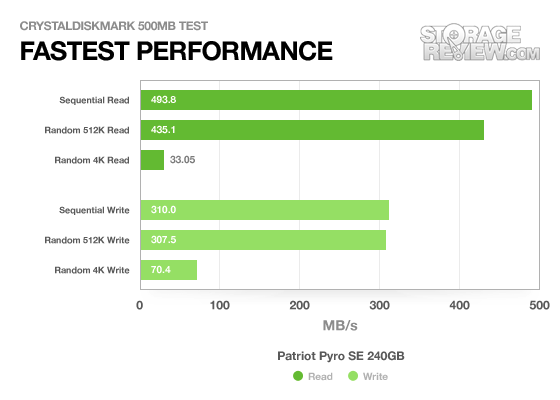 Our last synthetic benchmarks cover how the drives perform in an enterprise environment; the drives are subjected to server-style workloads. For the general consumer these benchmarks are not as relevant. We normally expect to see a performance increase from left to right as the queue depth increases from 1 to 128. 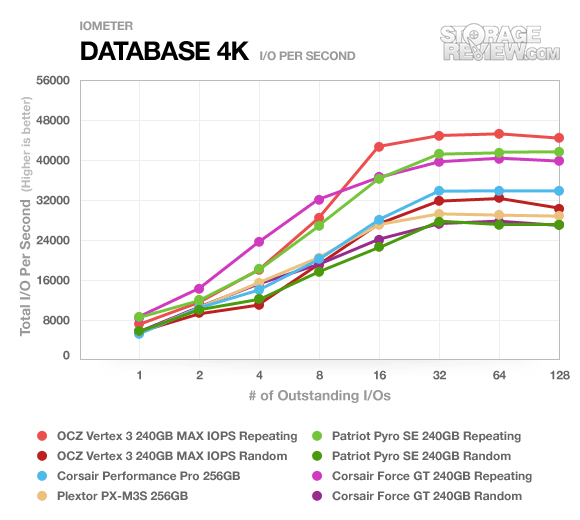 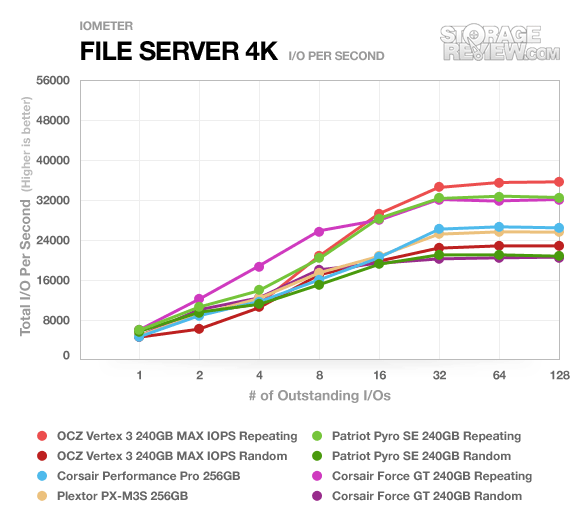 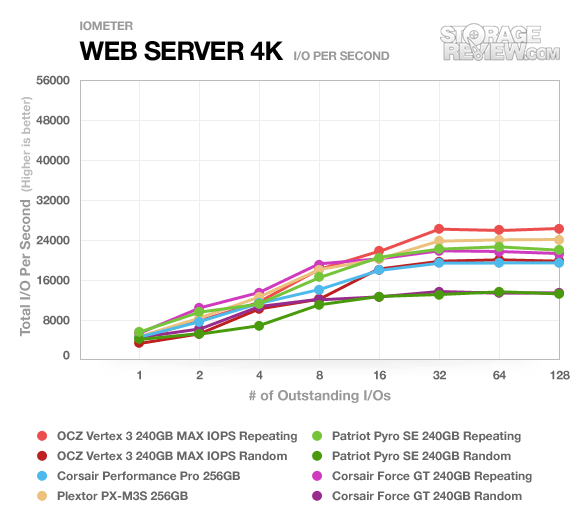 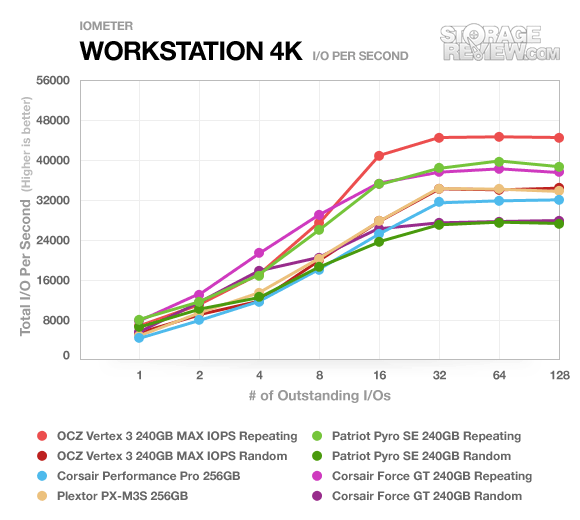 The Patriot Pyro SE 240GB (Repeating) performed very well here falling just behind the OCZ Vertex 3 (Repeating), which dominated the charts. The Pyro’s Random readings, however, placed last in all of the enterprise environment benchmarks.

Our real-world benchmarks are precisely that; we run actual applications and perform operations on real data to show exactly how these drives perform in the real world. There are three StorageMark 2010 benchmarks: HTPC Disk Capture, Productivity, and Gaming. 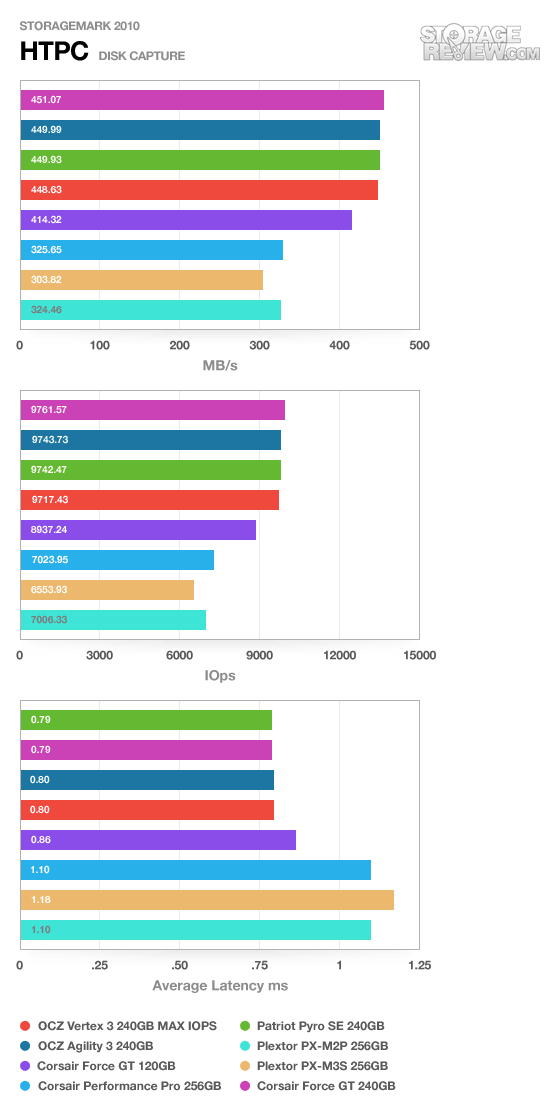 The Patriot Pyro SE also shows good numbers in our real-world benchmarks, especially when tested for average latency. It did fall a little short in the MB/s and IOps, but since the scores were so close, it is likely not a noticeable difference in the real world. 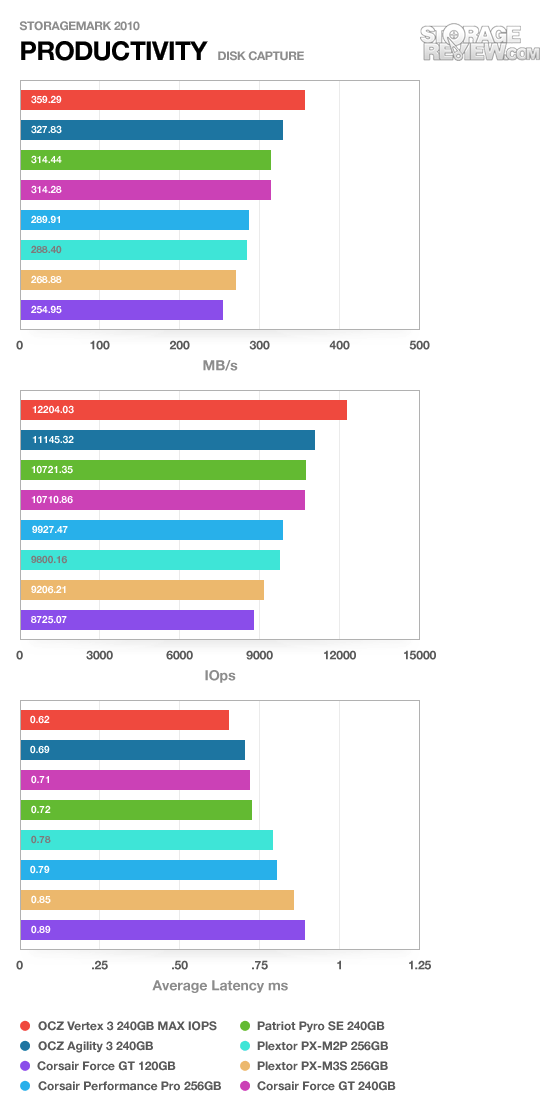 Here we see a little dip in performance with the Patriot Pyro SE, scoring in the upper mid-range. 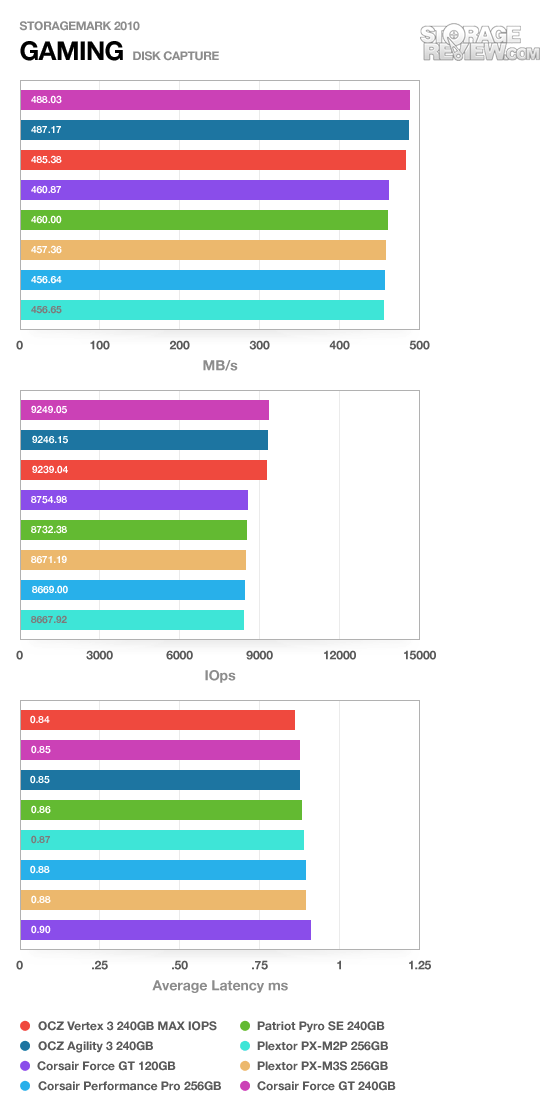 The Patriot Pyro SE performed decent here only performing 6% slower than the Corsair Force GT 240GB and 2% higher in latency. In all likelihood, this is not a difference that would be noticed in the real world.

SSDs are notable for their low power consumption and the Patriot Pyro SE 240GB seems to fare pretty well in this department. At idle the drive uses just 0.66W; a common notebook hard drive might use twice as much. The highest values we measured were 2.24W for read and 4.08W for random reads (which is a little high for an SSD). 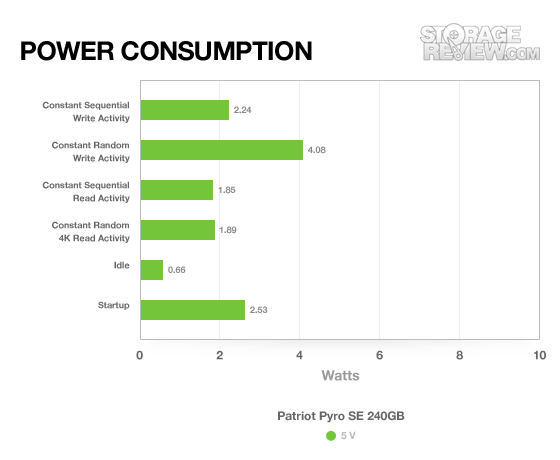 Overall, the Patriot Pyro SE delivered outstanding performance in our synthetic benchmark tests, where it quickly became the drive to beat. It successfully fills the performance gap between the higher-end Patriot WildFire and the budget version of the Pyro (non-SE). Like most SandForce drives, however, the Pyro SE’s performance did suffer when reading and writing uncompressible data, but because of its synchronous NAND flash, its performance didn’t diminish nearly as much as some other drives. When looking at pure IOPS performance, the Patriot Pyro SE truly shines.

In our real-world benchmarks the Pyro SE SSD ranked middle of the pack with the fastest drives we have reviewed to date, which says a lot when you are looking at new models. Overall with its exception performance and good pricing it would be hard not to recommend the Patriot Pyro SE.

The Patriot brings a sleek, high-performing product to the market with the Pyro SE and though it is a little more expensive than other drives in its category, it is certainly worth it in some categories.