While Plextor doesn’t have an extensive range of SSD offerings in the consumer space, the drives they do bring to market have historically been very good. In fact, Plextor has eeked more performance out of the Marvell 9174 (which at this point, if not old is certainly near end of life with the successor announced a few months ago) than anyone else using that particular SSD controller. Plextor also boasts industry leading internal validation and other testing to make sure their SSD reliability is top of market. The new PX-M5S continues the Plextor mantra of delivering incremental improvements over time. While not a revolutionary change, the M5S SSD is a perfect example of progressive SSD engineering, delivering an end product that’s expected to be a step better than prior generations.

While Plextor doesn’t have an extensive range of SSD offerings in the consumer space, the drives they do bring to market have historically been very good. In fact, Plextor has eeked more performance out of the Marvell 9174 (which at this point, if not old is certainly near end of life with the successor announced a few months ago) than anyone else using that particular SSD controller. Plextor also boasts industry leading internal validation and other testing to make sure their SSD reliability is top of market. The new PX-M5S continues the Plextor mantra of delivering incremental improvements over time. While not a revolutionary change, the M5S SSD is a perfect example of progressive SSD engineering, delivering an end product that’s expected to be a step better than prior generations.

When compared to the prior generation M3S, consumers aren’t going to notice much change. The key difference between M5S and the M3S is the NAND. Plextor switched from using Toshiba 24nm in the M3S to Micron 25nm for M5S. The M5S also sports a new firmware, with modest stability and performance enhancements. Overall though the drives are very similar; both offer a 2.5″ 9.5mm SATA form factor, Marvell 9174 controller and three year warranty. 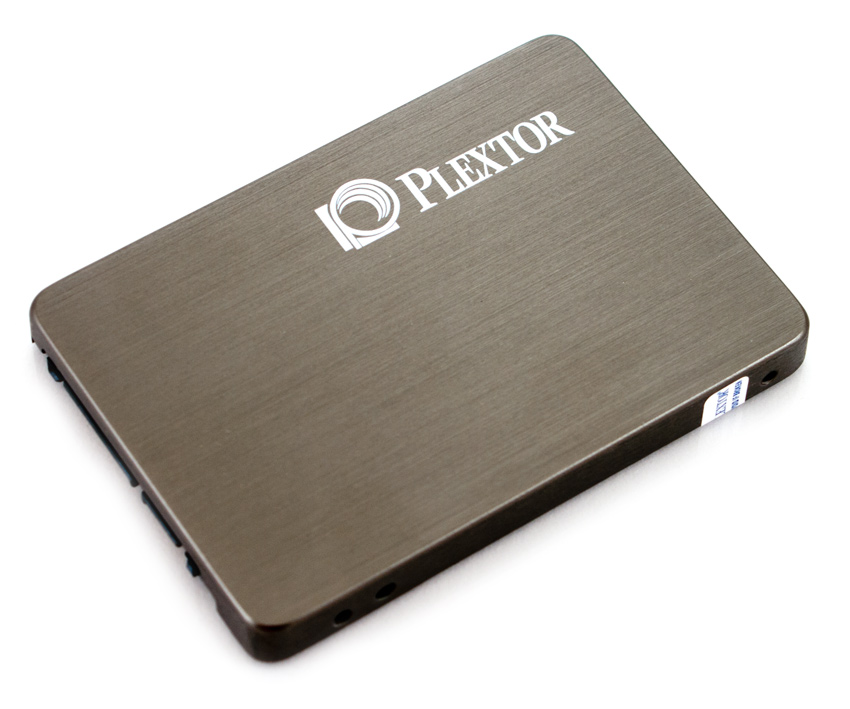 Plextor uses an all-metal body with the PX-M5S, giving it a durable feel and a stylized look. The metal alloy used is presented with a brushed metal finish, adding a bit of texture and a very solid feel with the drive in your hand. Both top and bottom match in color and finish, which adds to the appearance and really rounds off this SSD. 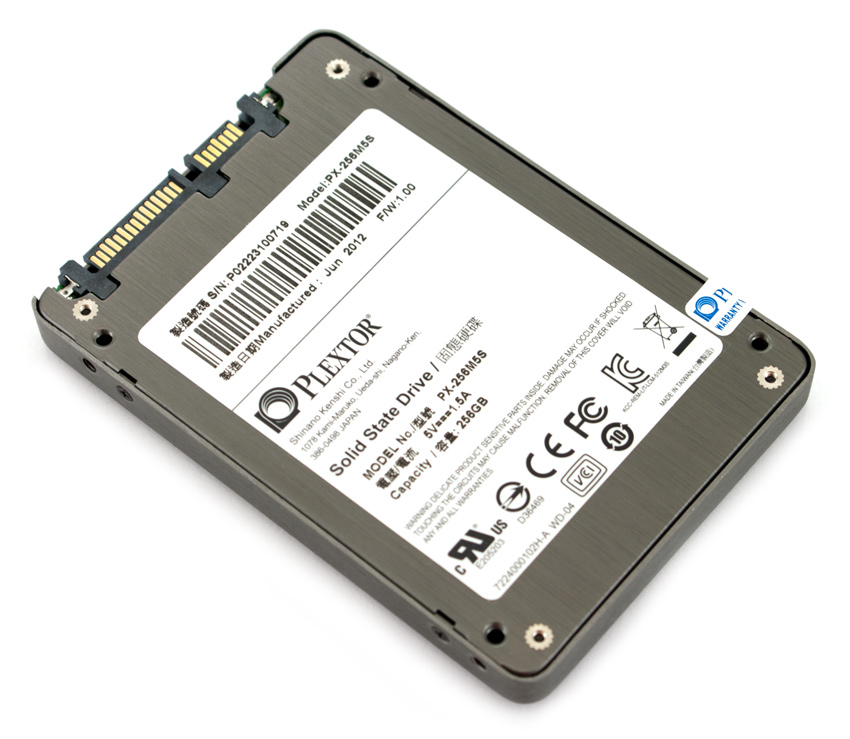 The side of the drive shows off the screws that hold the two case halves together, as well as standard horizontal mounting points. The bottom also includes mounting points as well for attaching this drive to sleds and hot-swap bays. The front of the drive includes the standard SATA power and data interface, with no service pins visible or other attributes.

Taking the Plextor PX-M5S apart is very simple, but voids your warranty in the process. To split the SSD apart, you simply remove the four Phillips head screws from the perimeter of the drive (one breaking the warranty voiding sticker) and then use a fingernail to split the case open. 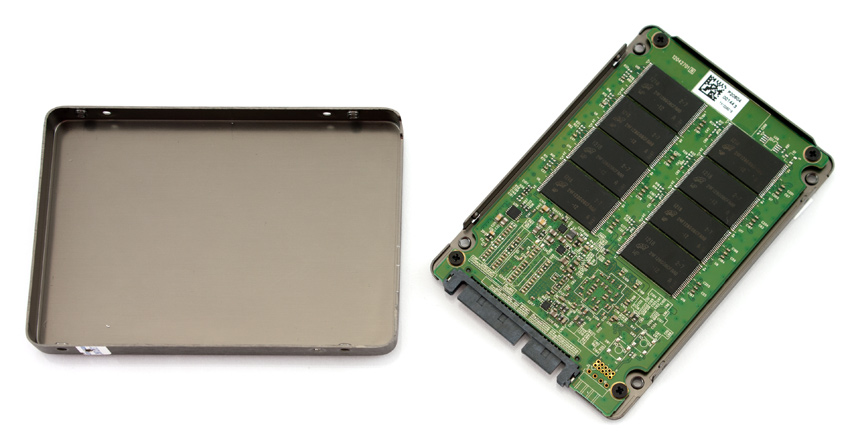 Inside the PX-M5S we find a 16-piece NAND configuration unlike the 8-piece layout seen inside the older PX-M3S. This setup utilizes one side of the circuit board for the flash and RAM, leaving the bottom open for just the controller. The controller is the tried and true Marvell 88SS9174-BKK2 SATA 6Gb/s processor. The main difference between the M3S and the M5S is the switch from 24nm Toshiba toggle NAND to synchronous 25nm Micron NAND. 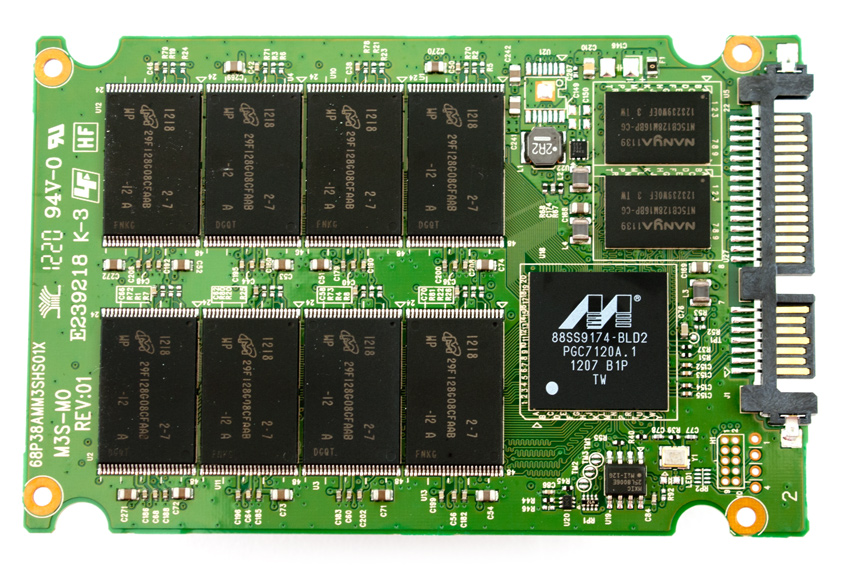 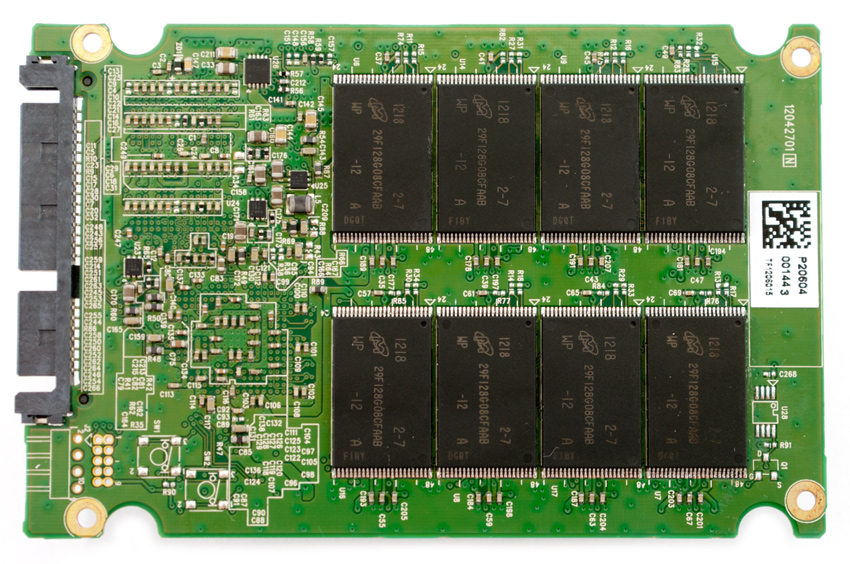 Our first test is a large-block sequential transfer, which Plextor advertises as 520MB/s read and 390MB/s write.

In our sequential transfer test we measured speeds of 491MB/s read and 379MB/s write. Compared to the M3S, both read and write speeds improved.

Our next test looks at large-block random transfers, which the M5S also improved on from the M3S.

Our next test looks at small-block transfers at a low queue depth, using a 4K transfer in IOMeter.

The remaining portion of synthetic benchmarks scales the queue depth from 1 to 64 or 128, to show how well the drives’ performance scales under load. 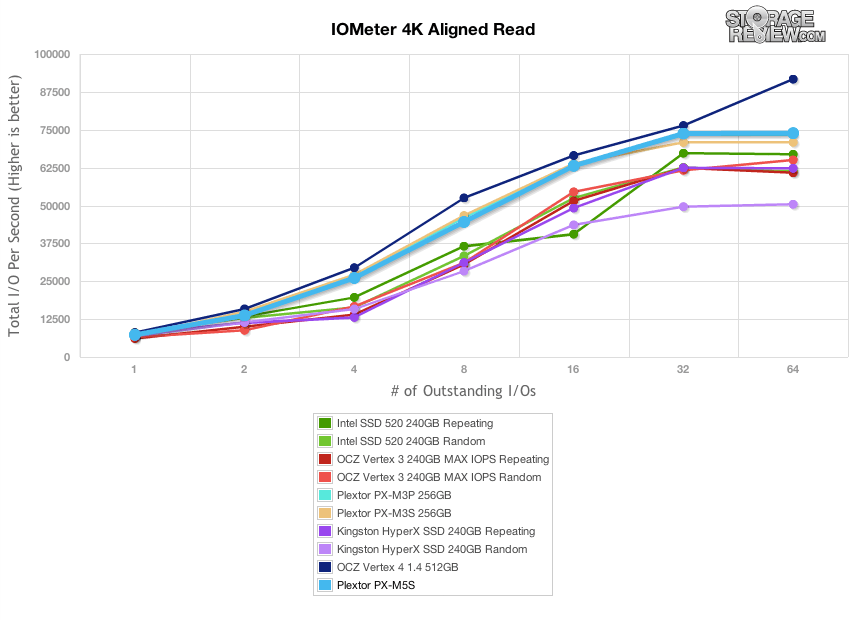 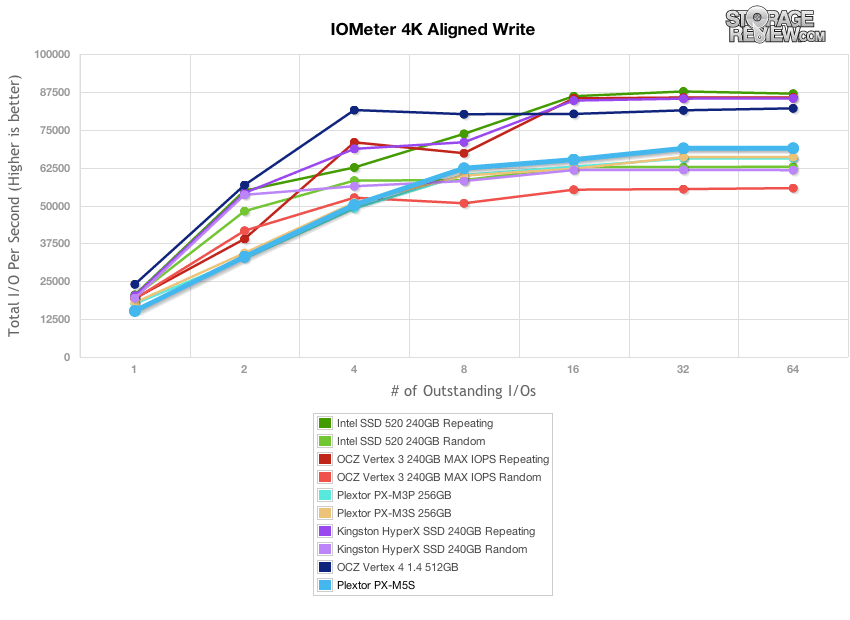 Switching to a random 4K write workload, the Plextor M5S scaled very well, peaking at 68,898 IOPS (70,000 IOPS rated), versus 65,550 IOPS from the M3S. Both drives scaled performance well, although the M5S had the edge over the M3S at the highest queue depths.

Expanding our QD1 4K test, we look at write latency of each SSD. Lower numbers are better, since it means less wait time for activity to process. Max latency is also important, although that number can change as the NAND wears over time. The Plextor M5S came in with latency higher than the M3S, and at the bottom of this group of SSDs. We measured an average latency of 0.062ms from the M5S with a peak latency of 6.55ms. 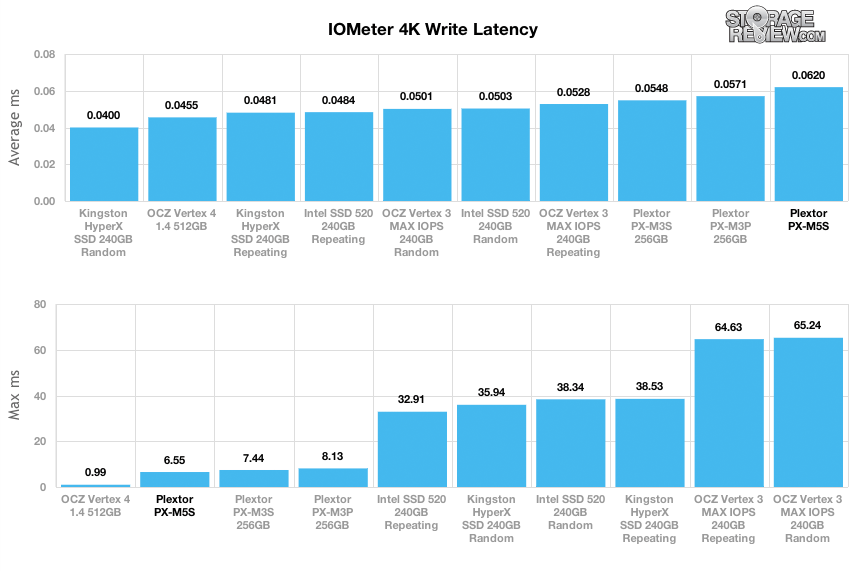 Our last series of synthetic benchmarks compare the hard drives in a series of server mixed-workloads with a queue depth of ranging from 1 to 128. Each of our server profile tests has a strong preference towards read activity, ranging from 67% read with our database profile to 100% read in our web server profile. The new Plextor M5S held its own very well, although in many of the mixed workloads, the Vertex 4 and SandForce SF-2200 models surpassed it at higher queue depths. 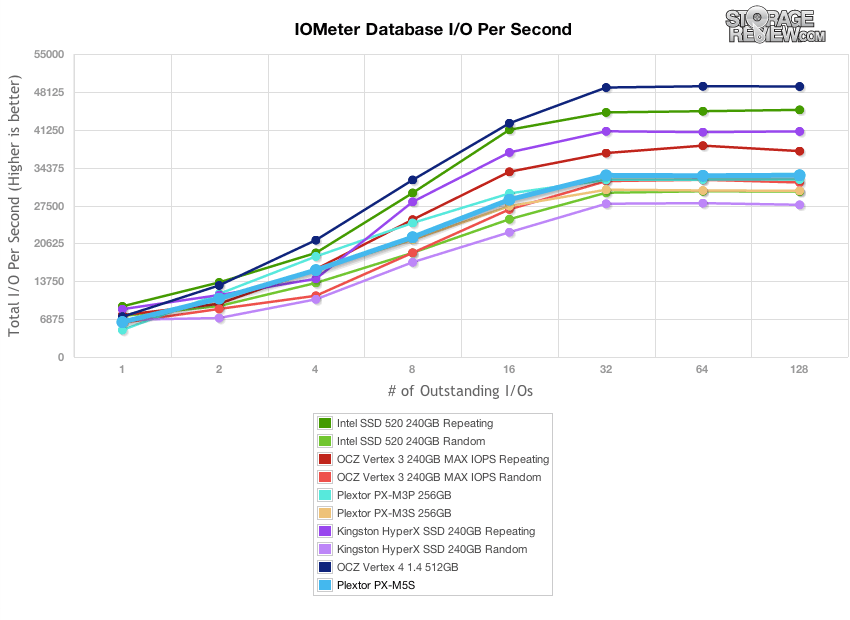 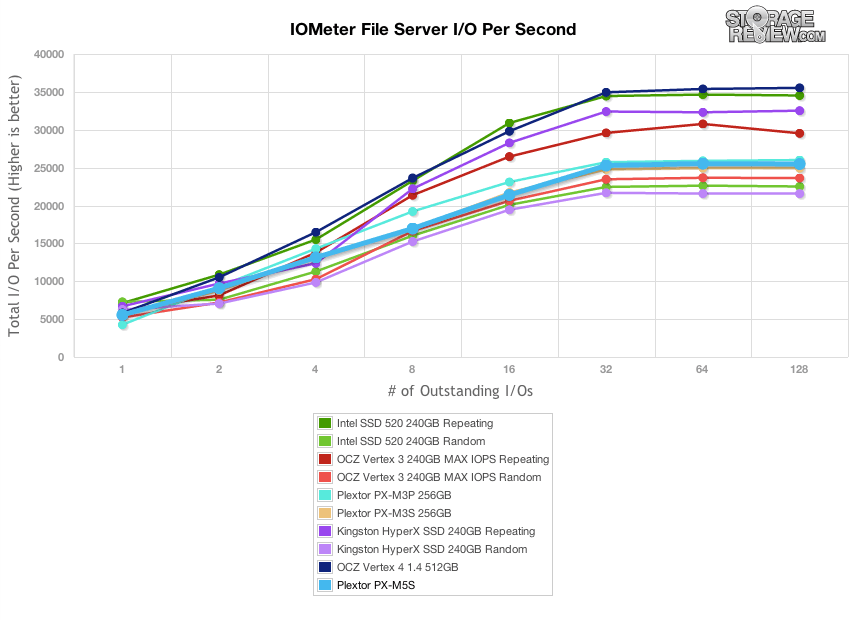 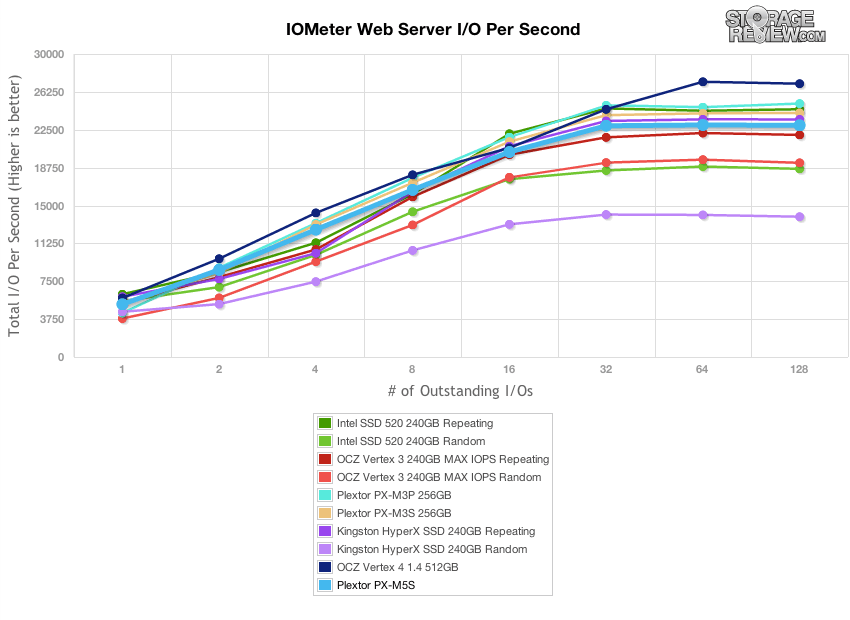 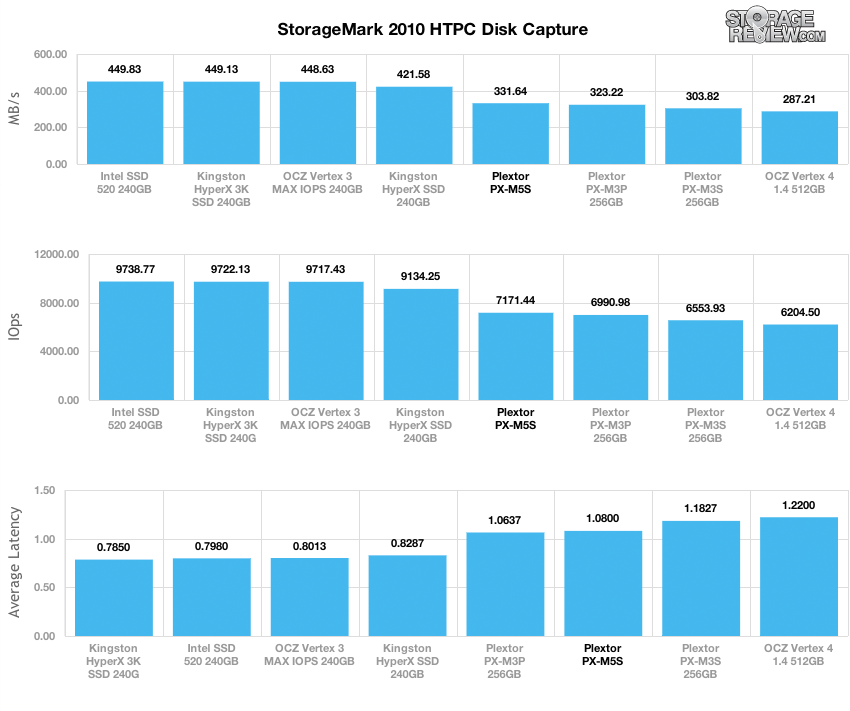 In our HTPC trace, the newer M5S edged out the M3S with a small lead, measuring 331MB/s average compared to 303MB/s before. 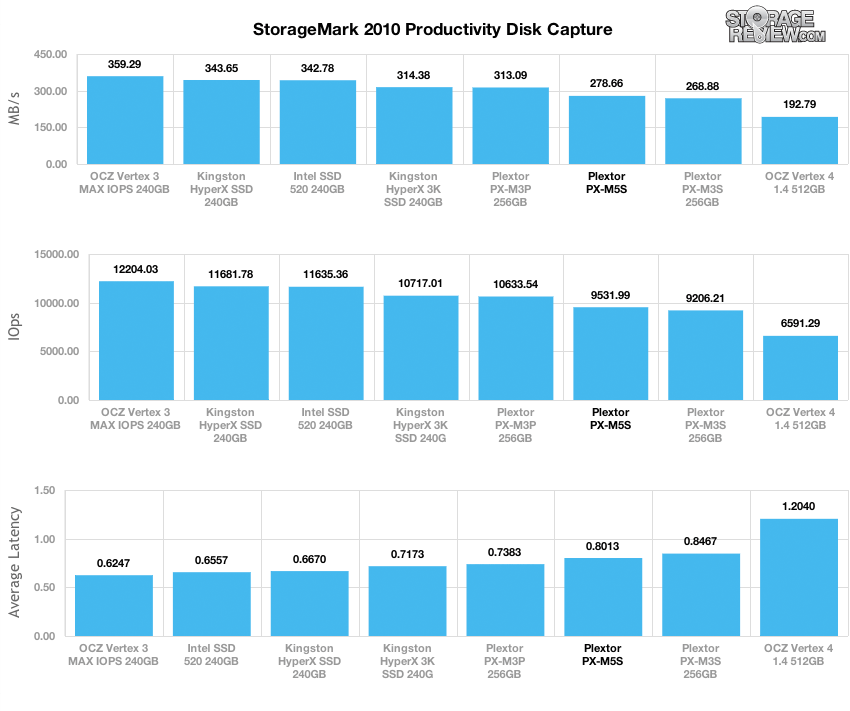 In our Productivity setting, the Plextor M5S slipped behind the older M3S with toggle NAND, averaging 278MB/s in combined read/write speed versus 313MB/s of the M3S. 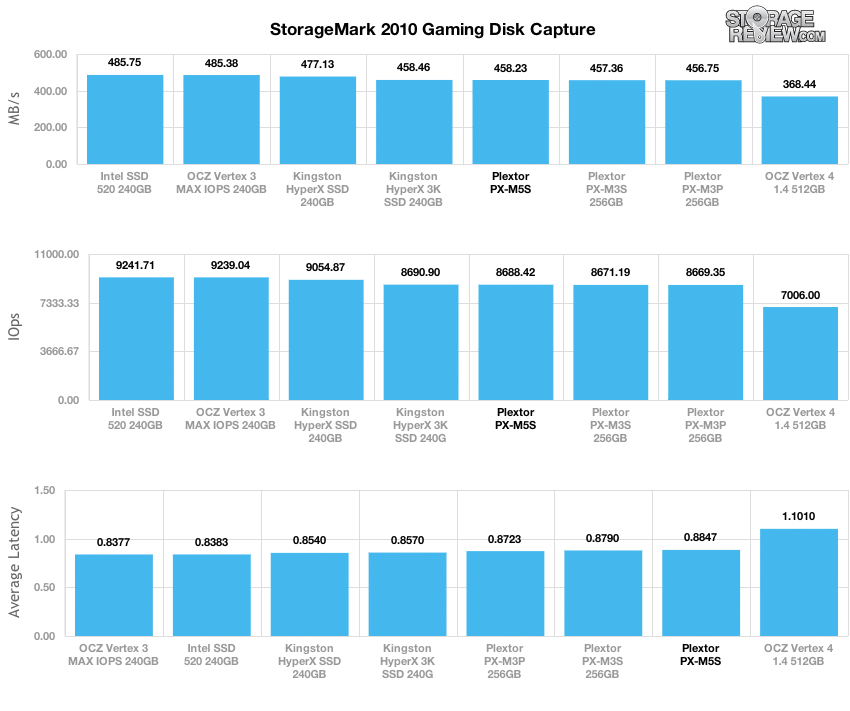 In a read-intensive gaming setting, the Plextor M5S performed very similarly to the M3S and M3P, measuring 458MB/s compared to 457MB/s or 456MB/s respectively.

Expanding on our Windows-environment testing on commodity hardware, we also include Apple-specific testing on a current-generation consumer Mac Mini. This platform uses the unused internal SATA connection combined with a custom breakout cable to test 2.5-inch SSDs and hard drives with the native secondary internal connection.

During our testing, we found a compatibility issue with the Plextor M5S SSD. We were unable to run basic performance analysis tests such as Blackmagic Disk Speed Test or AJA System Test. After partitioning the M5S on the system, it would become unresponsive to both read and write activity. Swapping it back into our Windows environment saw none of these problems, nor did other SSDs we tested on the Mac Mini. Plextor is attempting to replicate our issue, but says they’ve seen no problems when using the drive as primary in the MacBook Pro.

Power consumption increased somewhat comparing the M5S to the older M3S in read and write settings. In our tests we measured write activity at 4.12 watts, compared to 3.58 watts on the M3S. Read activity measured 2.31 watts, compared to 1.98 watts previous. Random read activity measured 0.82 watts, versus 0.77 watts prior, although idle activity stayed roughly the same measuring 0.34 watts on the M5S versus 0.35 watts.

The Plextor M5S shows us that there’s still a little more upside available to the Marvell 9174, which is pretty impressive given its time on market. While the main change in the M5S from the M3S (note some Asian companies prefer not to use the unlucky number four in their model numbers) is a NAND edit, Plextor has further tweaked their firmware to eek out a little more performance in most areas.

Our benchmarks show gains in most categories, although most were subtle especially in our mixed workloads. In many cases the M5S matched the performance of the M3S across the board. The one area that the M5S did slip in was low-queue depth random workloads, where the toggle NAND equipped M3S was able to beat it. Power consumption also increased, which wasn’t a huge surprise with more silicon on the circuit board needing to be powered, with a sixteen piece NAND configuration over the eight-piece prior. Overall the M5S offers a more subtle increase in performance, most users are unlikely to be able to tell a difference.

The Plextor M5S swaps out NAND and offers an improved firmware from the M3S it replaces. There are generally performance increases throughout, but they’re small, which is to be expected given the age of the processor being used. The biggest gain is in pricing, right now the M5S is a little cheaper across the board, with further price reductions likely as the drive spends more time in market. Overall, the M5S is another solid offering from Plextor and is worthy of consideration for consumers who want performance and reliability.