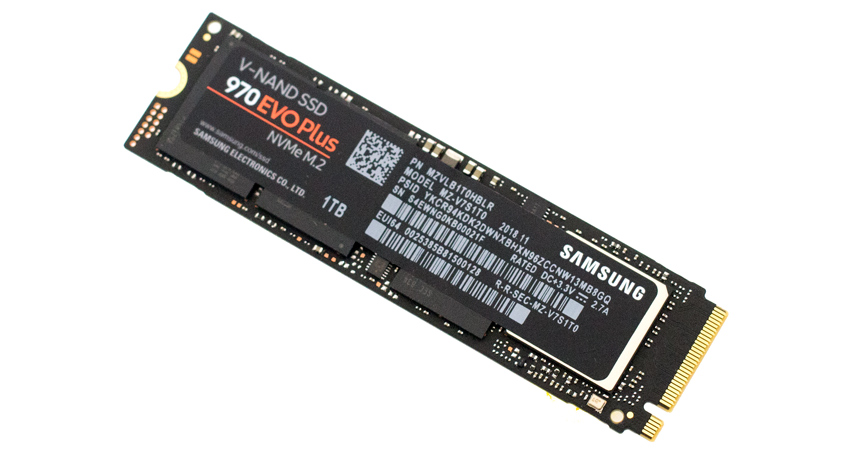 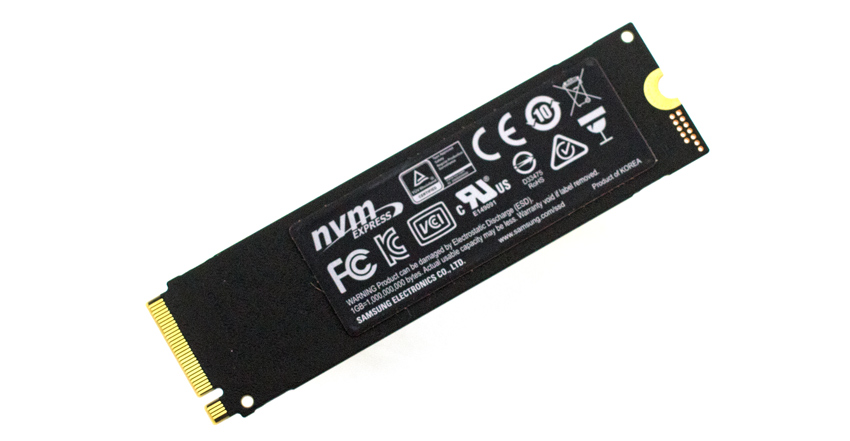 In this review, we took a look at the 1TB model, though there are also smaller capacities available in both 500GB or 250GB and will start with a MSRP of $89.99.

Looking at the performance of rendering time (where less is better), the 970 EVO Plus found itself in the upper-half of the scoreboard with 2,646.7 seconds, falling a few places behind the Samsung 970 Pro, which placed at the top of the non-Optane drives. 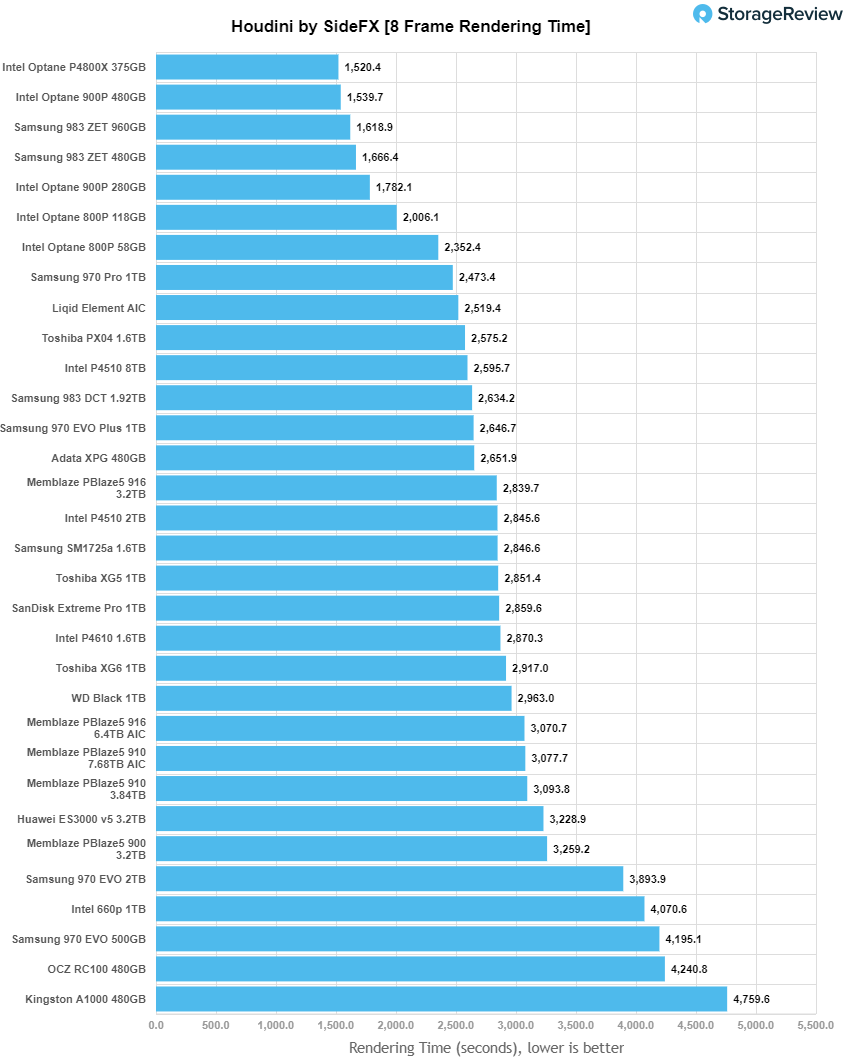 When looking at SQL Server Output, the Samsung 970 Plus 1TB was the top performing drive with 3,161.7 TPS. 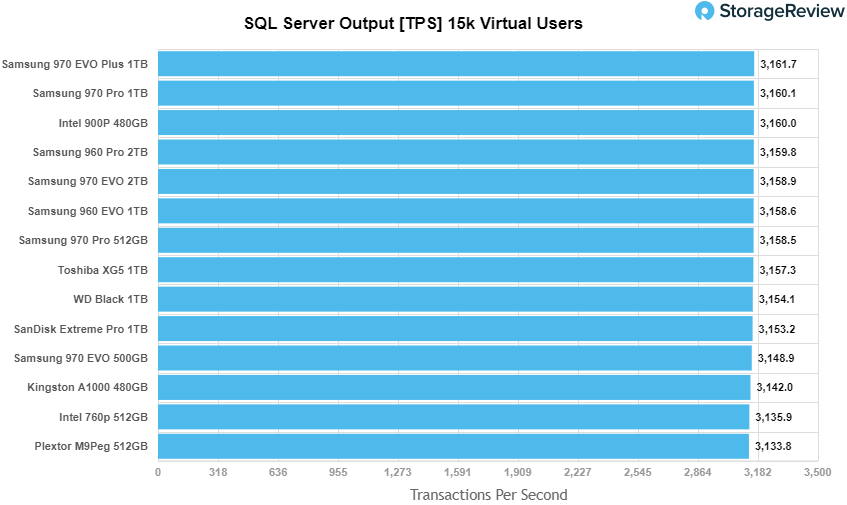 Looking at average latency in the same test, the 970 Plus 1TB recorded an impressive 1.0ms, placing it, once again, at the top of the leaderboard. 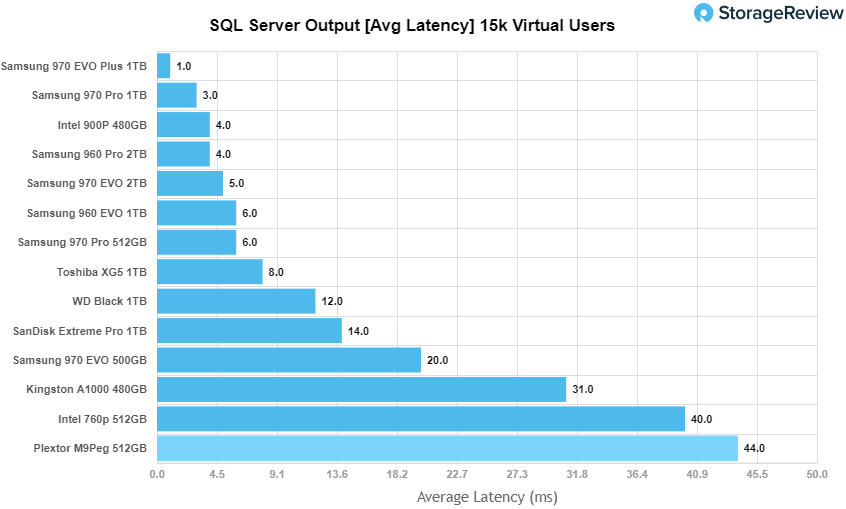 In our first VDBench Workload Analysis, we looked at random 4K read performance. Here, the 970 EVO Plus broke sub-millisecond latency at only 129K IOPS. The 970 EVO Plus peaked at 431K IOPS with a latency of 295.3μs, putting it second to the Samsung 970 Pro 1TB. Though it was able to finish with a higher peak IOPS than the Intel Optane 800P, the Optane was able to maintain sub-millisecond latency at over double the IOPS of the Samsung 970 Plus.

Switching over to sequential work with 64K tests showed slightly disappointing performance, kicking the test off with a latency of 196.3μs, and peaking at 18,582.05 IOPS or 1.12GB/s at an 861.2μs latency level.

Sequential 64K writes told a noticeably improved story, with the 970 EVO Plus showing sub-millisecond latency until around 21K IOPS. The 970 EVO Plus was outperformed by the 970 Pro, but still showed impressive performance overall, peaking at 22,374.6 IOPS or 1,398.41 MB/s with a 707.3μs latency.

Next, we looked at our VDI benchmarks, which are designed to tax the drives even further. These tests include Boot, Initial Login, and Monday Login. Looking at the Boot test, the Samsung 970 EVO Plus didn’t show its best performance, finishing second to last with a peak performance of 84,431.48 IOPS with a 424.5μs latency level.

In our VDI Initial Login, the 970 EVO Plus posted much better results, showing a peak performance of 49,272 IOPS with a latency of 606μs, putting the drive second overall.

The 970 EVO Plus is the newest member of Samsung’s 3-bit MLC-based NVMe SSD portfolio designed for client PCs. Utilizing Samsung’s latest technology, the 970 EVO Plus shows outstanding endurance and performance, making it one of the leading drives in its segment. In our review, we tested the 1TB capacity drive, but smaller drives are available in both 500GB and 250GB capacities, which are likely to show a slight decrease in performance compared to the larger 1TB drive.

Looking at Application Workload Analysis performance, the Samsung 970 EVO Plus showed the fastest results in SQL for the consumer segment that our lab has seen so far, showing 3,161.7 TPS and an average latency of 1.0ms. Not only did the 970 EVO Plus have the top TPS score it did so with one-third the latency of the 970 Pro model that is aimed at users needing the higher performance. Looking at other drives in comparison here of TPS to latency just shows the 970 EVO Plus to be even more impressive. The 970 EVO Plus’s placement in Houdini wasn’t record setting but came in at a fairly strong 2,646,7 seconds, a good showing for an M.2 drive on the test.

In 4K reads and writes, the drive showed impressive results with 431K IOPS and 365K IOPS, respectively. Switching over to 64K reads and writes, the 970 EVO Plus showed performance of 1.12GB/s and 1.46GB/s, respectively. While latency wasn’t its best in reads, the drive more than made up for it in writes. Our VDI benchmarks had the 970 EVO Plus have average to fair performance with 84K IOPS for Boot, 49K IOPS for Initial Login, and 34K IOPS for Monday Login.

Samsung has released yet another impressive drive in its EVO line. Its VDBench numbers stayed toe to toe with the highest performers in the m.2 NVMe space and its SQL Server numbers were the highest we’ve ever measured in the consumer category. The 970 EVO Plus was able to hit the highest TPS with latency much lower than any other drive we have tested to date at only a single millisecond.

Samsung 970 EVO Plus at Amazon