The Samsung SM951 M.2 is a high-performance, low-powered PCIe SSD that is designed for use in both ultra-slim notebook PCs and workstations. The SM951 is very similar to the HP Z Turbo drive that we reviewed inside the HP Z620 in both specifications and performance, which offered twice the performance of standard high-performance SSDs all at a similar price tag. Since this impressive debut, consumers have been asking for this drive to hit the market, so the recent release of Samsung SM951 M.2 PCIe SSD is a huge deal for many, including here at StorageReview. That being said, consumers will have to pay a premium if they want to reap the benefits of this impressive drive. To avoid confusion, we are reviewing the AHCI version of the SM951 not the soon to be released NVMe version.

The Samsung SM951 M.2 is a high-performance, low-powered PCIe SSD that is designed for use in both ultra-slim notebook PCs and workstations. The SM951 is very similar to the HP Z Turbo drive that we reviewed inside the HP Z620 in both specifications and performance, which offered twice the performance of standard high-performance SSDs all at a similar price tag. Since this impressive debut, consumers have been asking for this drive to hit the market, so the recent release of Samsung SM951 M.2 PCIe SSD is a huge deal for many, including here at StorageReview. That being said, consumers will have to pay a premium if they want to reap the benefits of this impressive drive. To avoid confusion, we are reviewing the AHCI version of the SM951 not the soon to be released NVMe version. 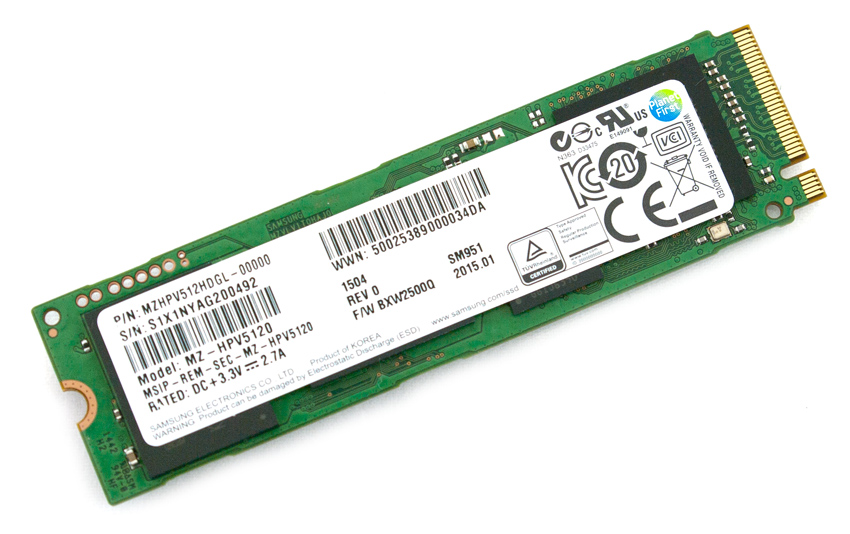 The SM951’s tiny M.2 form factor (which is comprised of 80mm x 22mm or roughly one-seventh the size of a standard 2.5″ SSD) makes for an ideal solution inside space constrained applications like laptops. This results in more space for other vital components, such as batteries, in small system platforms. Additionally, though the SM951 M.2 SSD weighs only six grams, it comes in capacities up to 512GB, which certainly makes it a viable upgrade option for numerous use cases and applications.

Though the Samsung SM951 may be a very small storage device, it is specced as a considerable performer and is equipped with End-to-End Data Protection. Using a PCIe 2.0 interface, the Samsung drive is quoted to reach speeds up to 1,600MB/s in reads and 1,350MB/s in writes as well as random performance of 130,000 IOPS read and 85,000 IOPS write; this makes it approximately 30% faster than its predecessor, the XP941. When using a PCIe 3.0 interface, Samsung quotes even faster performance, setting maximum sequential read performance at a whopping 2,150MB/s and sequential writes at 1,500 MB/s. In addition, the company claims random 4KB reads can reach 90,000 IOPS with writes maxing out at 70,000 IOPS using PCIe 3.0. Nevertheless, there are a lot of factors that can affect PCIe performance, all of which depend on the computer itself (i.e. the components inside it) and system settings, so some users may have trouble replicating these quoted speeds. Samsung also indicates that it is compatible with most motherboards and notebooks with a M.2 PCIe interface slot; however, the SM951 line is not designed to work with the MacBook, MacBook Air, or MacBook Pro.

Samsung SM951 M.2 SSD is just a fraction of the size of a 2.5 inch SSD, measuring in at only 80mm x 22mm. As is the case with all devices of this type, the SM951 does not have a casing, leaving its components exposed. Users should thus be cautious when transporting or installing any M.2 drives. 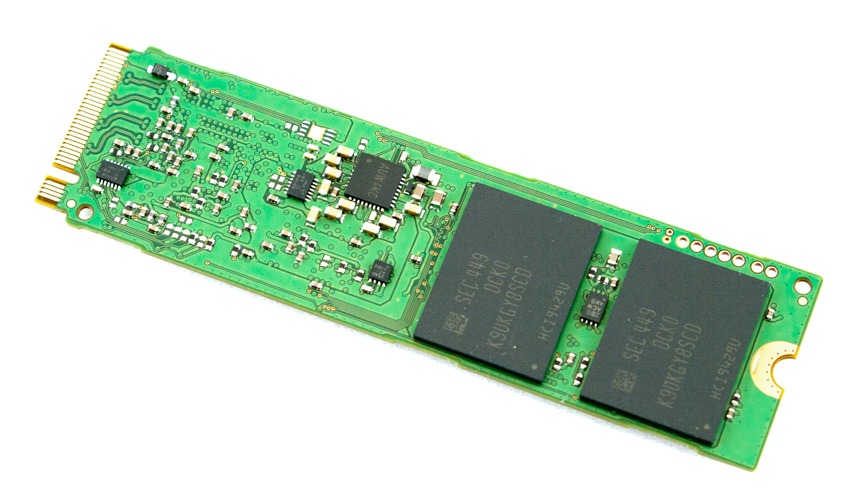 The front side is branded with a sticker that partially covers the NAND chips all the while displaying various information about the drive. The side opposite of the connectors has an M key notch, which denotes a specific use of the M.2 module; in this case, it indicates PCIe x4 and SATA compatibility.

The other side of the M.2 drive is home to the NAND packages. all capacities use the Samsung UBX 3-Core controller and Samsung 16nm MLC NAND.

In our first test, we measured 2MB sequential performance from Samsung SM951. Here, the drive posted an impressive 1,729.2MB/s read and 1497.9MB/s write.

In our next test, which looks at 2MB random transfer performance, the Samsung SM951 recorded impressive results once again with read and write activity that measured 1337.6MB/s and 1,080.9MB/s, respectively.

Our next benchmark measured the Samsung SM951 drives in MB/s. In this test, the 512GB drive boasted read and write performance of 38.28MB/s and 136.08MB/s, respectively.

When looking at average write latency, the SM951 posted fantastic results again with an impressive average response time and peak latency at 0.0283ms and 2.825ms, respectively. 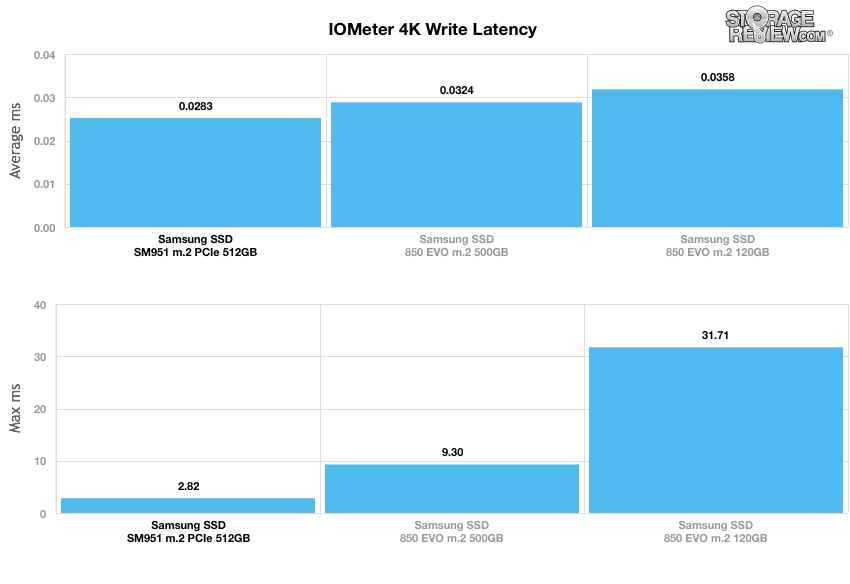 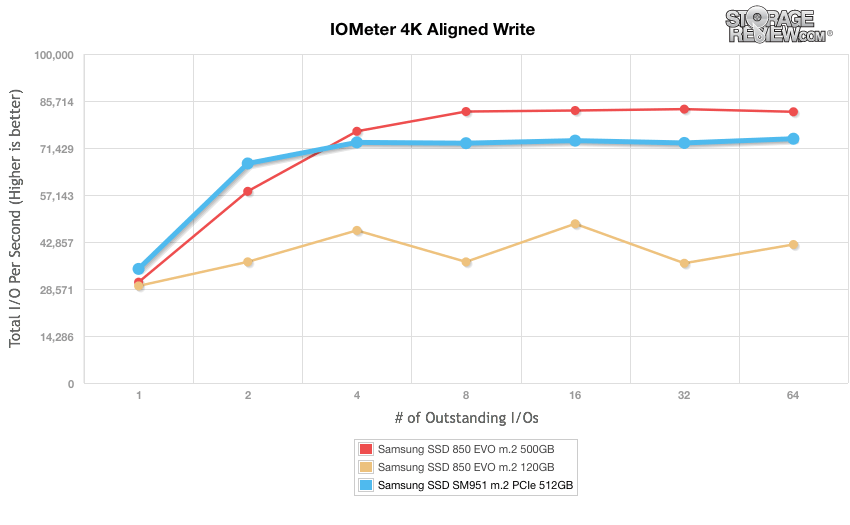 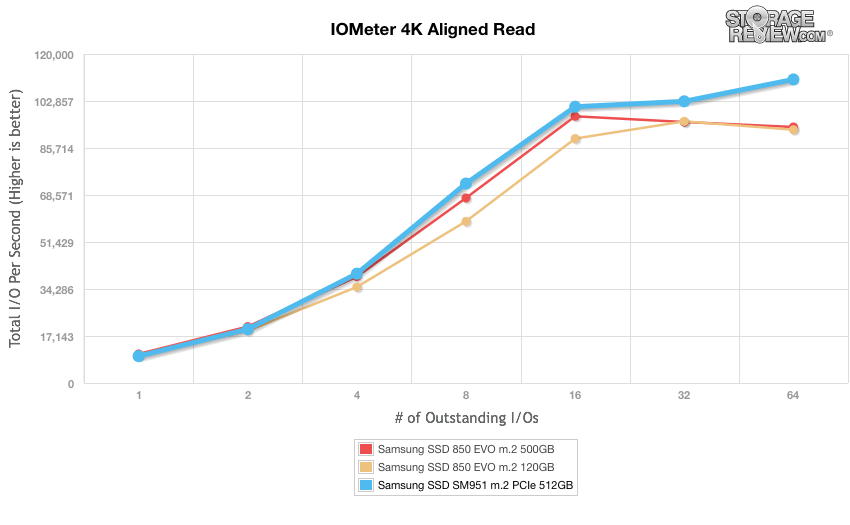 The first is our database profile, which consists of a 67% read and 33% write workload mix primarily centered on 8K transfer sizes. In this trace, the Samsung SM951 512GB measured a range from 10,487.67 IOPS to an impressive 74,027.97 IOPS in the terminal queue depths. 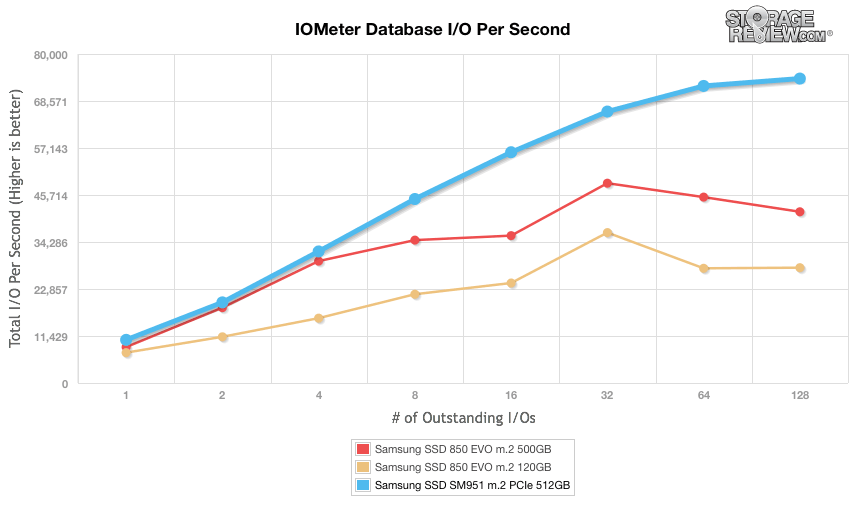 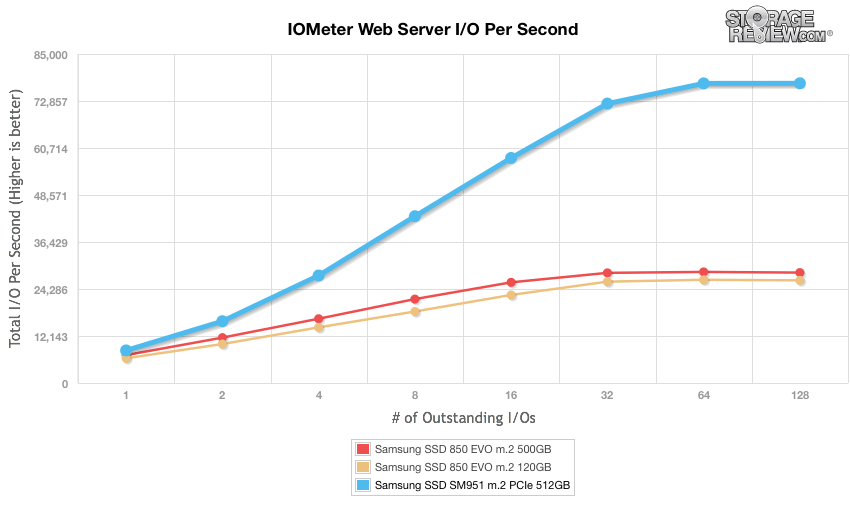 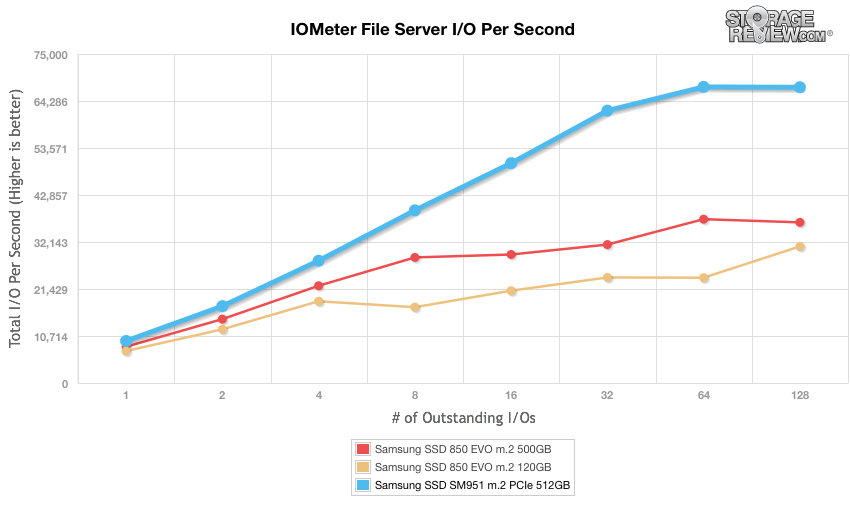 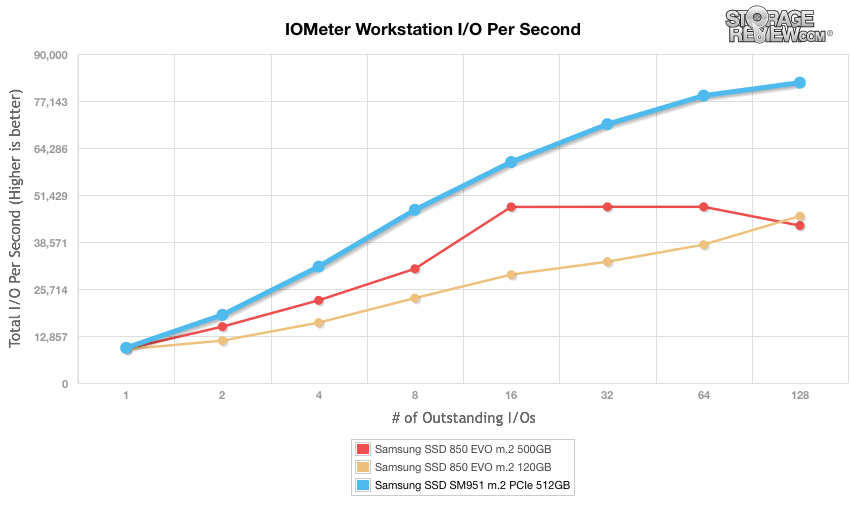 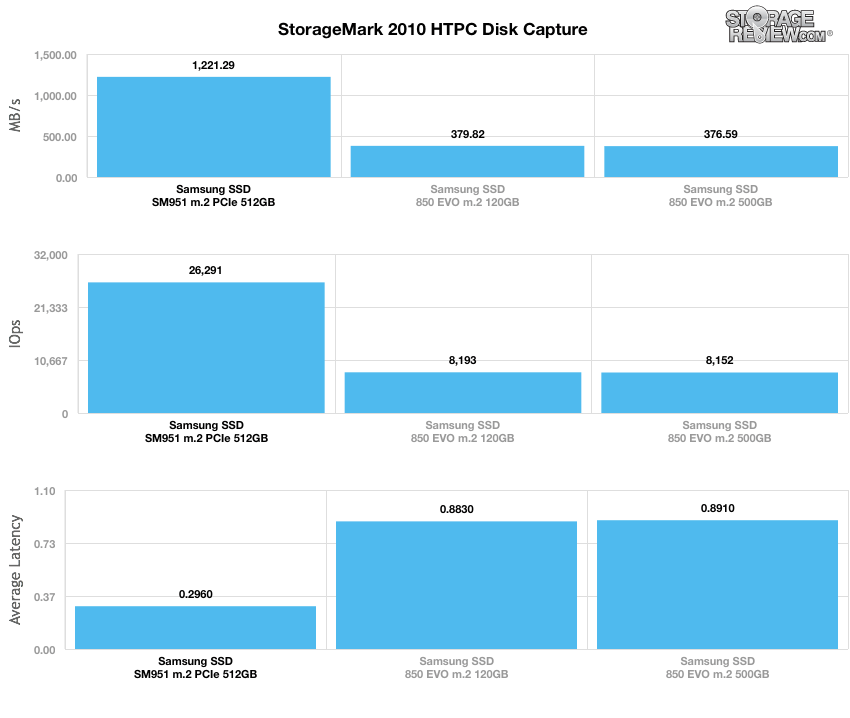 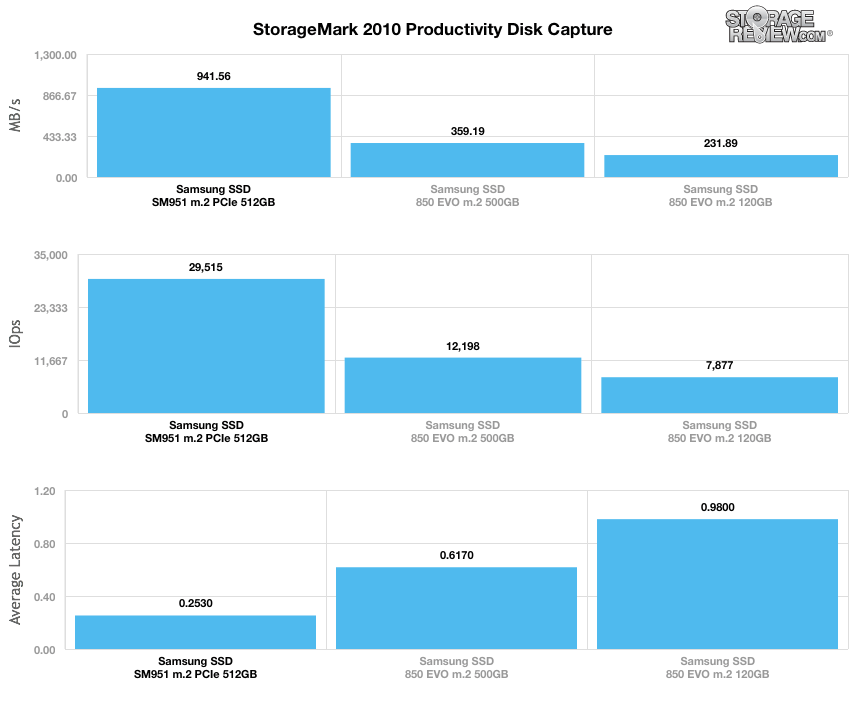 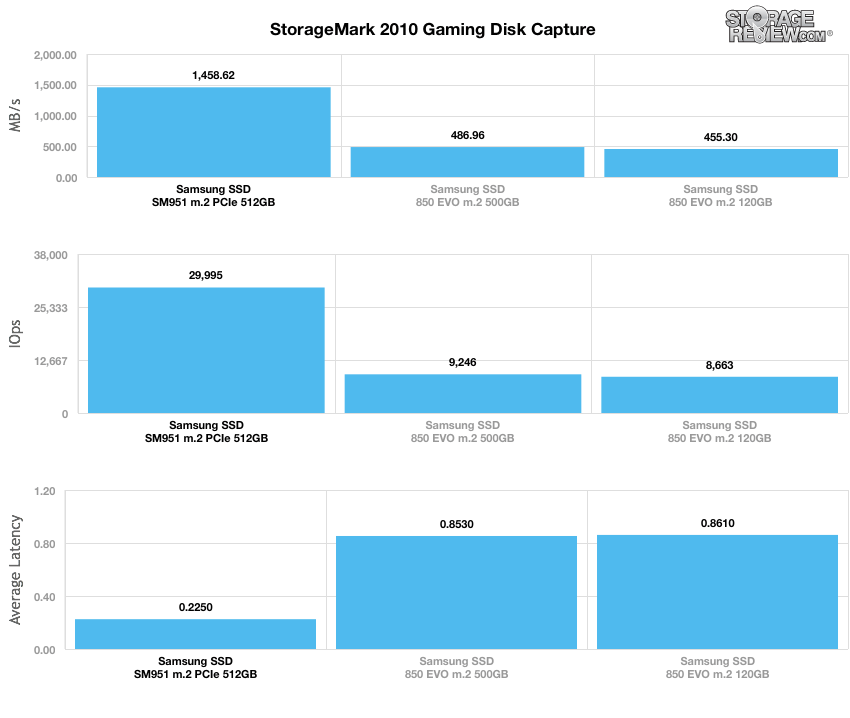 The Samsung SM951 M.2 PCIe SSD is a serious performer, as the much anticipated drive showed us that it was capable of boasting some tremendous throughput during our tests. The drive is also comprised of a decent capacity size with upwards of 512GB in storage, though it would have been nice to see a 1TB model. In addition, the SM951 is equipped with the Samsung UBX 3-Core controller and 16nm NAND, all of which is packed inside the tiny M.2 form factor that weighs a mere six grams. As such, power users looking to upgrade their ultra-slim notebook PCs and workstations will certainly find a lot to love with Samsung’s new overachieving drive, as it will be a huge upgrade in virtually every scenario.

As far as performance specifics go, the SM951 posted fantastic results overall during our consumer synthetic and real-world benchmarks. When looking at our 2MB sequential and random transfer tests, the SM951 posted a blistering 1,729.2MB/s read and 1497.9MB/s write, and 1,337.6MB/s read and 1,080.9MB/s write, respectively. When we put it through our smaller 4k random transfers benchmarks, the Samsung SM951 posted 9,800.2 OPS for read activity and 34,836.6 IOPS for write activity, while reaching 38.28MB/s read and 136.08MB/s write. These results were on par with its brethren, the Samsung 850 EVO M.2. Things really picked up during our server mixed-workloads (with a queue depth of ranging from 1 to 128), where the SM951 boasted speeds that were some of the fastest we’ve ever seen for a consumer drive. These results were mirrored during our real-world benchmarks, which was highlighted by our gaming trace’s bar-setting 1,458.62MB/s and 29,995.25 IOPS (6% write and 94% read).

Samsung has unquestionably tightened its grip on the small form-factor SSD industry even more with the release of the SM951 and because there is a very limited selection on the M.2 SSD market (particularly with the PCIe 3.0 interface), having such a quality option readily available is very exciting for enthusiasts and consumers looking for ultra-high performance. There is no doubt that the SM951 is one of the fastest performing M.2 drive on the market; however, it does come at a pretty penny at roughly twice the cost of the Samsung 850 EVO M.2. That being said, many users will find that it’s a price they are willing to pay in order to have the best drive possible inside their ultra-thin device.

Though the Samsung SM951 comes at a higher cost than 2.5” SATA SSDs, it provides much more performance, much lower power consumption, all within its tiny form factor.