Seagate’s Constellation enterprise hard drives come in 6Gbps SAS and SATA interfaces; we pit them against one another using the second-gen Constellation.2 2.5″ drive and fifth-gen Constellation ES.2 3.5″ drive. The following models are participating in this review:

First let’s consider the 2.5-inch Constellation.2. Seagate says this second-generation drive is the first 2.5-inch enterprise drive with a 1TB capacity in a 15mm z-height drive. Designed for 24/7 operation, it features a 7200RPM spindle speed and 64MB cache. The company claims the drive consumes 6.4 watts of power or less on average, or 41% less than typical 3.5-inch enterprise drives. The Constellation.2 is also available in 500GB and 250GB capacities (250GB in SATA 6Gbps only). The 1TB drive has four 250GB platters. 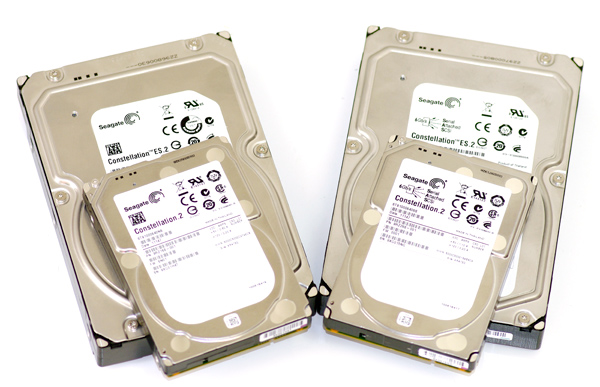 The fifth-generation Constellation ES.2 is a 3.5-inch drive with a 7200RPM spindle speed and 64MB cache. Seagate claims it is the lowest power to operate 3TB enterprise drive on the market at less than 12W on average. It has five platters with 600GB/platter density.

Both drives are backed by a five-year limited warranty.

Something to watch for in this review is differences between the SAS 6Gbps and SATA 6Gbps interfaces in overall performance. Seagate posts identical numbers for both drives, with the SATA drives consuming slightly more power. We expect there to be little overall difference but will wait for the synthetic and real-world benchmarks to tell the true story.

Keep in mind that enterprise drives are designed for server-style workloads, especially ones involving multiple requests at once. This will become apparent in the IOMeter server benchmarks.

Seagate has a pretty consistent scheme with their labeling and hard drive design. The top cover includes the basic black on white sticker stuck on top of the vibration dampening plate on the top cover. The design doesn’t vary much compared to the consumer B3TB Barracuda XT line. 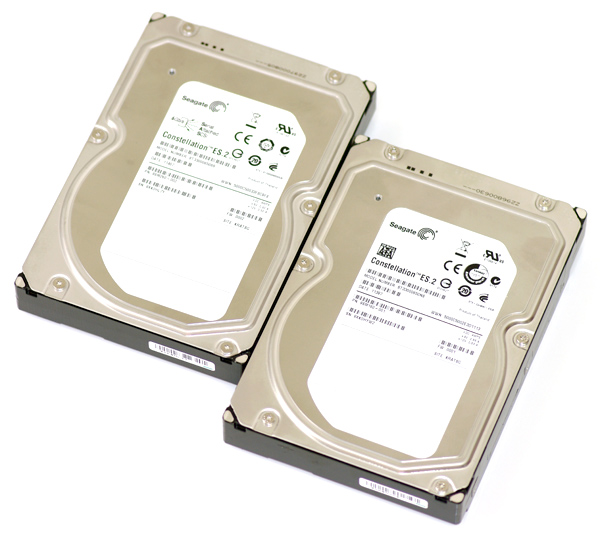 The smaller Constellation models keep the same look, but scale it down for the 2.5-inch form-factor. Both 3.5 and 2.5-inch models clearly display the designed interface standard on the drive label to indicate if they are a SATA or SAS connection. 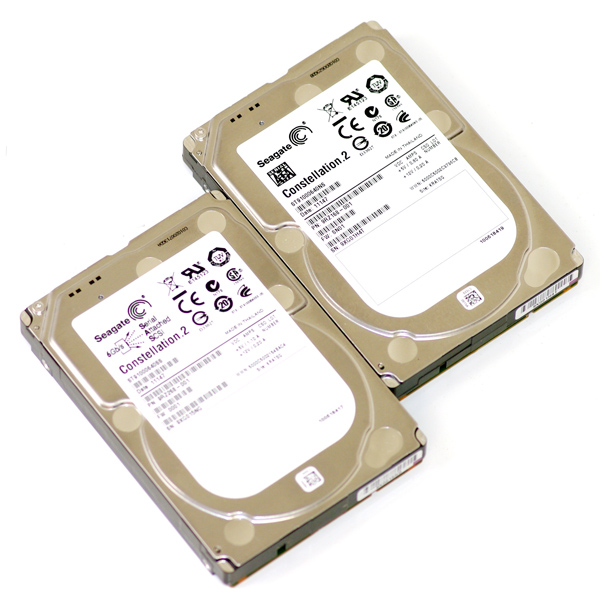 As you can see below, both models keep the same SAS or SATA connector, even in the scaled down drive size. Both form-factors also keep four service pins just to the right of the power and SATA/SAS connection.

We start off with a series of synthetic benchmarks. These benchmarks are designed to predict what to expect from these drives in the real world. Later on in this review we will look at real-world benchmarks. 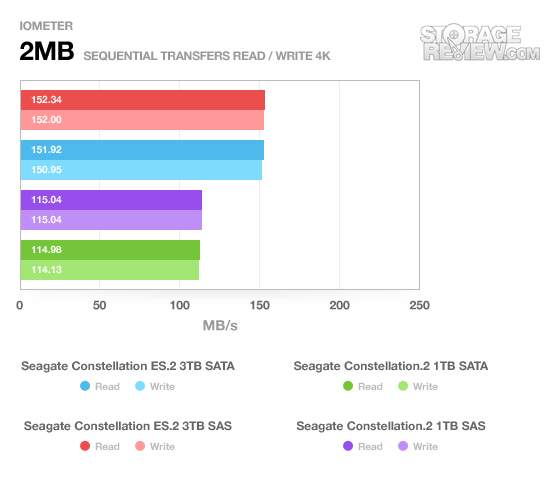 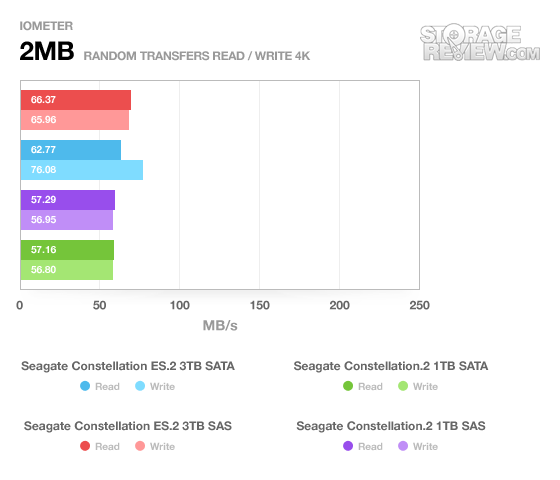 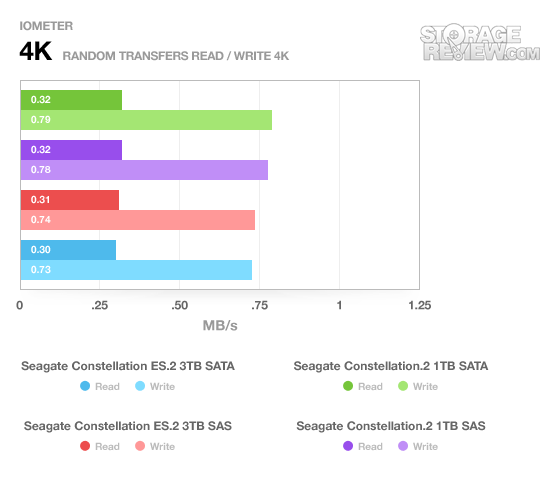 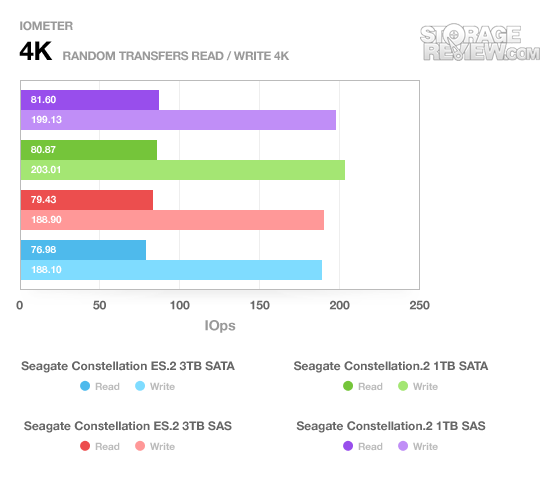 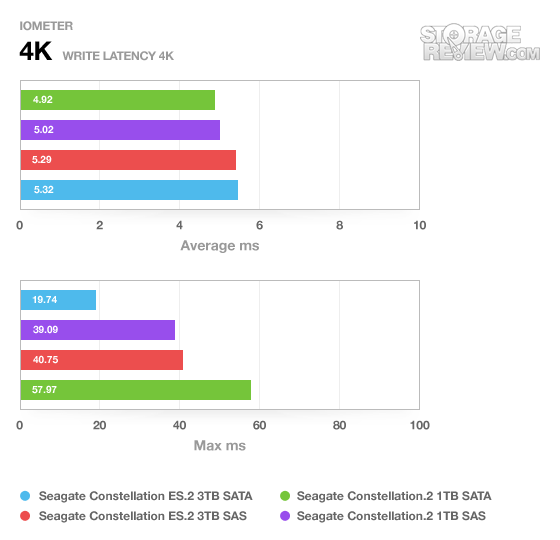 This next set of IOMeter benchmarks simulates server-style activity on the drives. This is where the Native Command Queuing (NCQ) optimization of the drives comes into play. 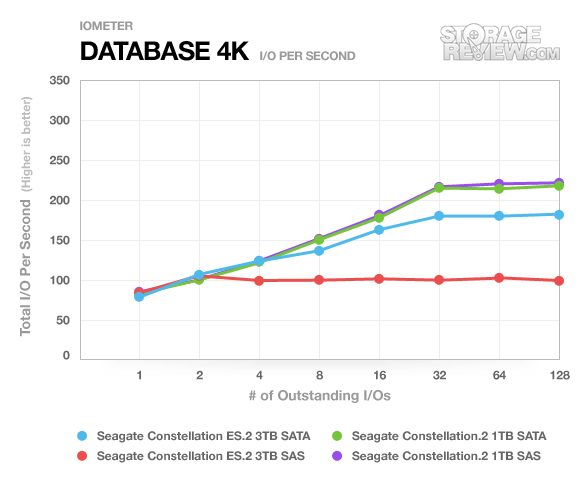 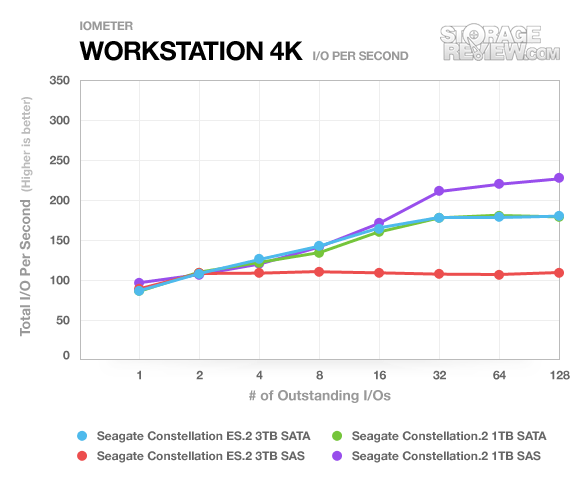 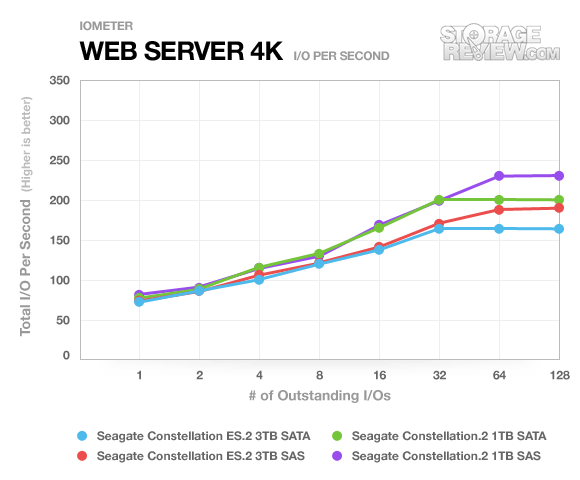 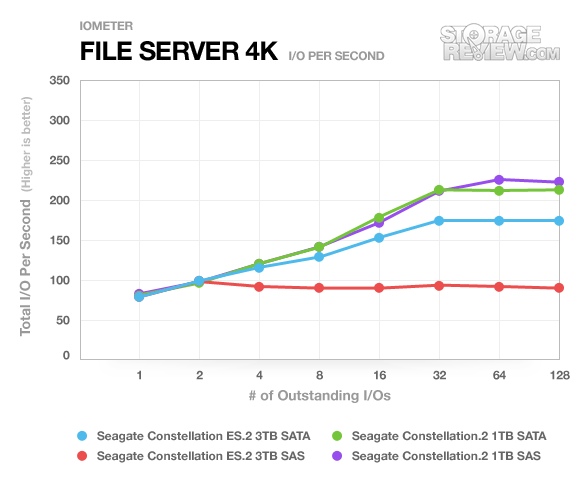 Off the bat we can see the Constellation ES.2 3TB SAS drive is very inconsistent; its performance is badly lagging in all but the web server benchmark. A normal drive should show a performance increase left to right as the request queue increases from one to 128. While it’s easy to assume there’s an issue with firmware, controller, or some other aspect of the drive; we didn’t see issues like this elsewhere and the drive checks out with Seagate’s diagnostics suite.

All of the benchmarks run up to this point have been synthetic – that is, simulated. In this next series of benchmarks we run our custom scripted Storagemark 2010 benchmarks.

In this test we include: playing one 720P HD movie in Media Player Classic, one 480P SD movie playing in VLC, three movies downloading simultaneously through iTunes, and one 1080i HDTV stream being recorded through Windows Media Center over a 15 minute period. Higher IOps and MB/s rates with lower latency times are preferred. In this trace we recorded 2,986MB being written to the drive and 1,924MB being read. 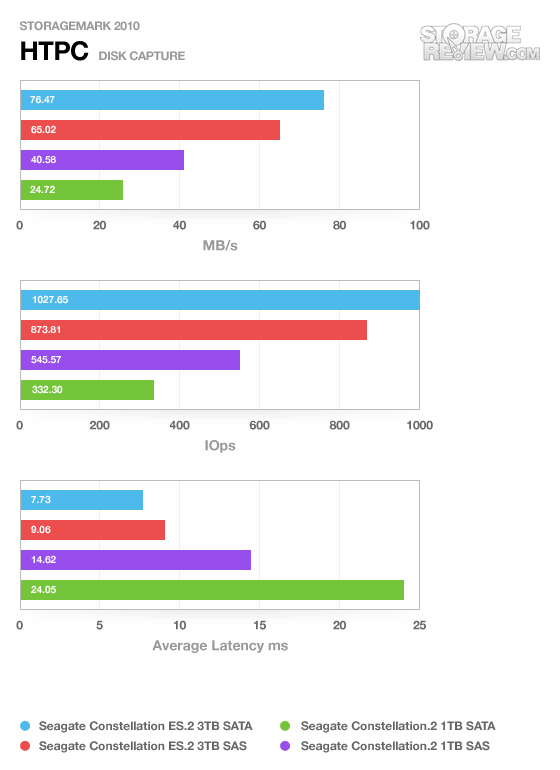 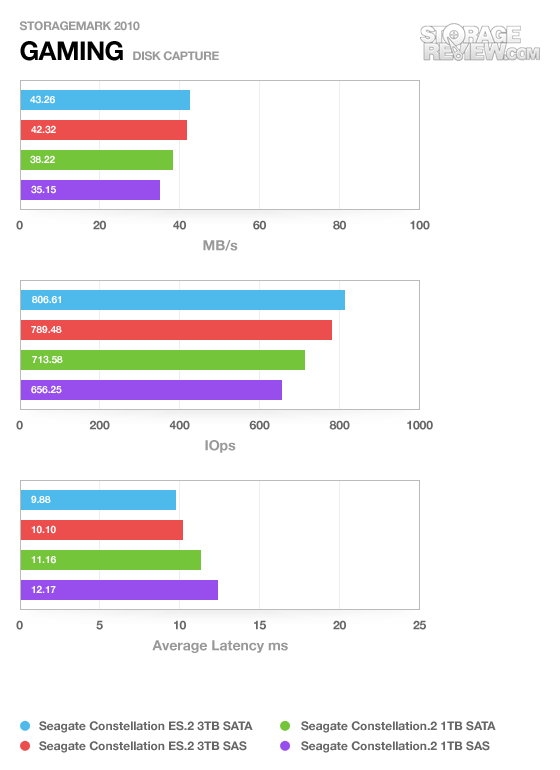 Our last real-life test covers disk activity in a productivity scenario. For all intents and purposes this test shows drive performance under normal daily activity for most users. This test includes: a three hour period operating in an office productivity environment with 32-bit Vista running Outlook 2007 connected to an Exchange server, web browsing using Chrome and IE8, editing files within Office 2007, viewing PDFs in Adobe Reader, and an hour of local music playback with two hours of additional online music via Pandora. In this trace we recorded 4,830MB being written to the drive and 2,758MB being read. 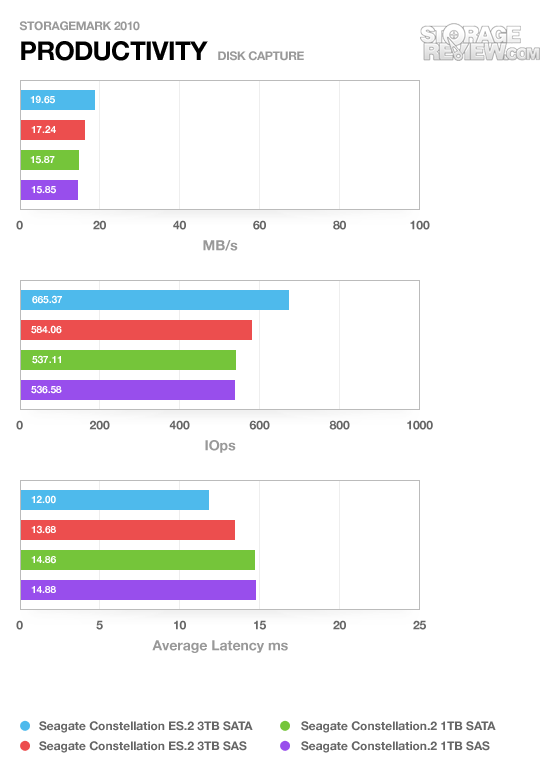 The power consumption test is most interesting; there is a pronounced difference between the SAS and SATA drives in terms of idle power usage. The SAS version of the Constellation ES.2 is 17% higher than the SATA version; the SAS Constellation.2 is one-third higher than the SATA version. Read/write/random read numbers are more or less uniform across SAS and SATA, with a slight edge to SATA.

Both the Seagate Constellation.2 and Constellation ES.2 are covered by a five-year limited warranty, which is amongst the highest found in the industry. Typical consumer hard drives carry a three-year warranty by comparison.

This review produced surprising findings in two areas: between the 6Gbps SAS and SATA interfaces as well as between the 2.5-inch Constellation.2 and 3.5-inch Constellation ES.2. It’s really a toss-up between SAS and SATA; each benchmark was a tug-of-war between them. Sometimes SAS would win out, sometimes SATA, and other times they would have identical performance – buy whichever interface your existing hardware supports.

The Constellation ES.2’s biggest advantage versus the Constellation.2 is its much larger capacity (pun intended); obviously the tradeoff is the physical size of the drive as well as power consumption. Deciding between the two will again most likely come down to what your existing hardware supports.

The SAS and SATA interfaces traded blows but neither one was definitively better. The Constellation.2 was behind the Constellation ES.2 in performance but is physically smaller and has lower power consumption.