The Seagate Enterprise Capacity 3.5" hard drive line is the newly rebranded family of high capacity hard drives of which the Constellation ES.3 is the newest member. The ES.3 is a 7,200 RPM, 3.5" enterprise hard drive with SAS or SATA 6Gb/s interface that’s offered in capacities up to 4TB. Seagate didn’t just bring a capacity bump to the line though. Compared to the prior generation Constellation ES.2, the ES.3 offers a sustained data rate of 175MB/s, up 13%, and Seagate has doubled the cache from 64MB in the ES.2 to 128MB in the ES.3.

The Seagate Enterprise Capacity 3.5" hard drive line is the newly rebranded family of high capacity hard drives of which the Constellation ES.3 is the newest member. The ES.3 is a 7,200 RPM, 3.5" enterprise hard drive with SAS or SATA 6Gb/s interface that’s offered in capacities up to 4TB. Seagate didn’t just bring a capacity bump to the line though. Compared to the prior generation Constellation ES.2, the ES.3 offers a sustained data rate of 175MB/s, up 13%, and Seagate has doubled the cache from 64MB in the ES.2 to 128MB in the ES.3.

The Constellation ES.3 is firmly targeted to enterprises who need large amounts of bulk storage with the reliability and performance benefits found in Seagate’s sixth generation enterprise high-capacity line. Further, with the SAS option in the ES.3, these drives are perfectly suited for storage arrays that offer high availability features. The drives are also tuned for enterprise workloads, making them more viable than consumer hard drives where some users have had to turn to up to this point to get 4TB capacities, albeit from a SATA interface only. 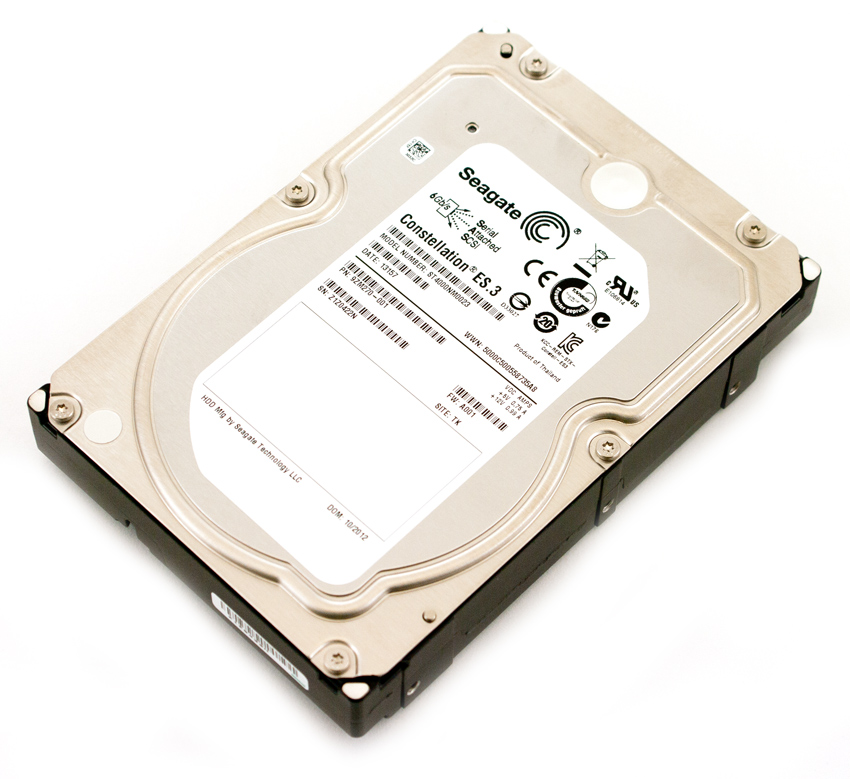 Seagate has made other progressive updates as well, like improved actuation move time which drives more IOPS at smaller queue depths. Power consumption has been dropped by 9% in idle when compared to the ES.2, MTBF has jumped from 1.2 million hours to 1.4 million and the load/unload cycles supported has doubled to 600,000. Seagate also touts features like the humidity sensor, thermal asperity selection, improved error correction and better data path protection on power loss.

Seagate offers the Constellation ES.3 in a variety of options. Both SATA and SAS versions come in 1TB, 2TB, 3TB and 4TB capacities. The SATA version comes in both standard and SED iterations, the SAS models also add a FIPS security option, which is currently exclusive to Seagate. The ES.3 comes with a 5-year warranty. Our review is of the 4TB SAS ES.3.

The Seagate Enterprise Capacity 3.5 HDD (Constellation ES.3) is a 3.5" LFF drive. Its external design is almost identical to the previous ES and ES.2 HDDs. Like previous models, it offers a SAS interface, with dual-6.0Gb/s connection. 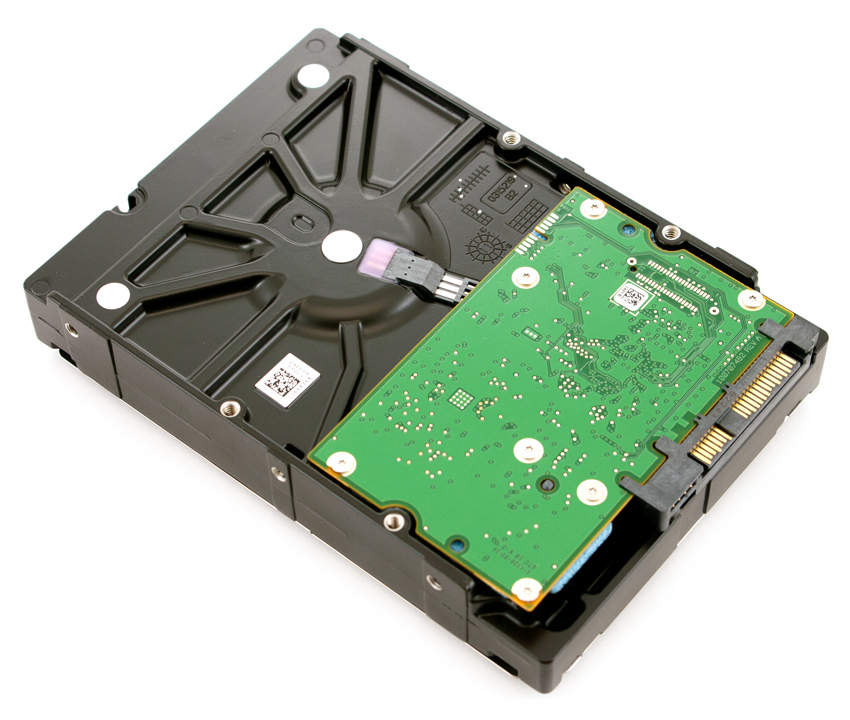 Removing the circuit board from the hard drive body, we find multiple thermal pads used to dissipate heat from certain components into the HDD body. This allows the drive to act as one large heatsink, bleeding off excess heat with normal server airflow. 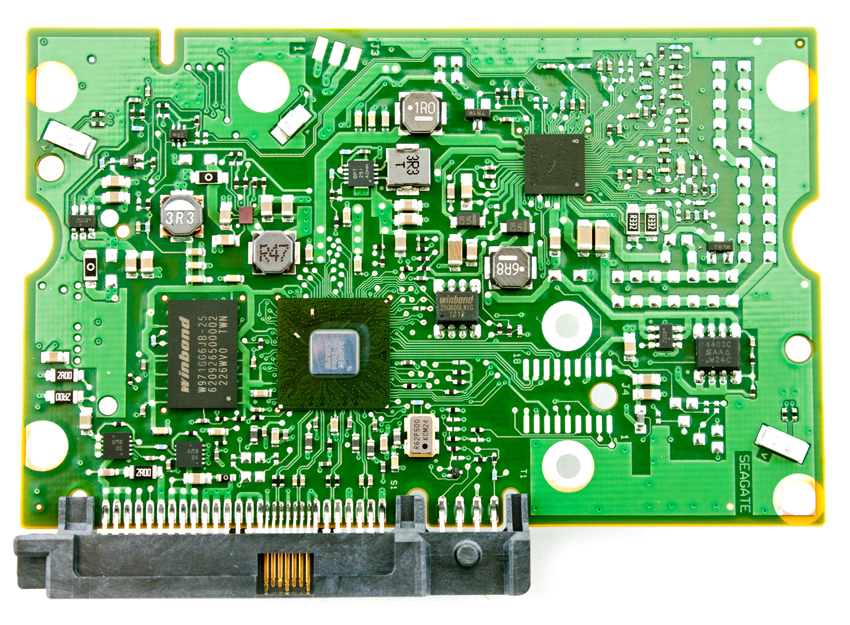 The Seagate Enterprise Capacity 3.5 HDD circuit board includes 128MB of on-board cache from a Windbond DDR2 module, a Marvell controller, and Smooth motor driver. The circuit board layout is such that all components are located on the inward-facing side, protecting them during installation and use. 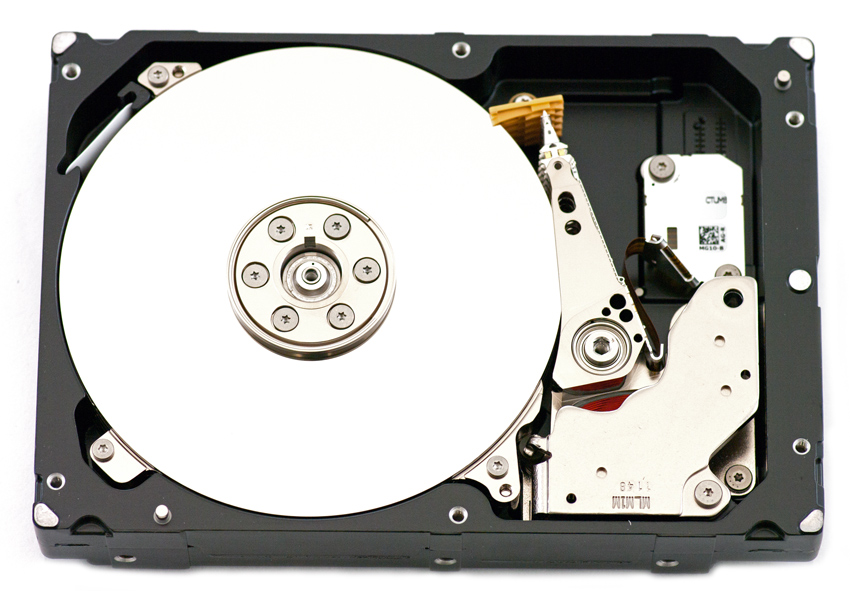 Looking inside the 4TB Constellation sample we see the neatly configured platter and head configuration with the soft-ramp head loading mechanism on the top-right. In the photo below we see the side profile of the 5-platter, 10-head design unique to the 4TB model. The 3TB design utilizes a 4-platter and 8-head layout. 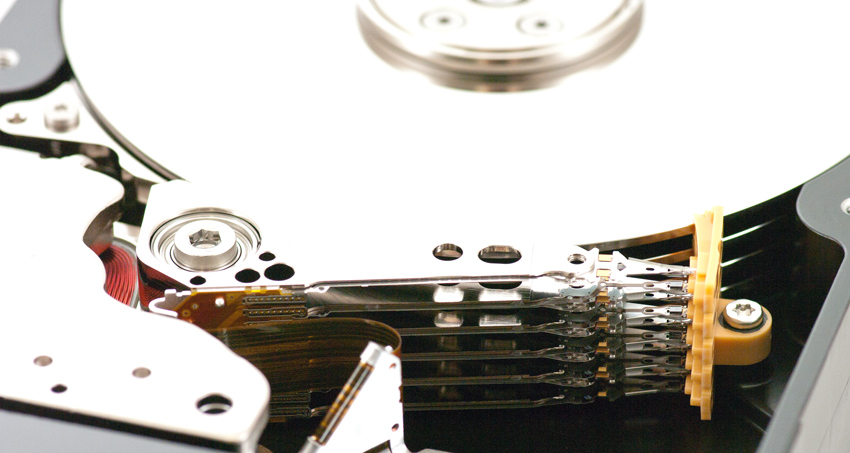 In our first workload with a 100% random 4K transfers, we measured 229 IOPS read from the Seagate Constellation ES.3 and 192 IOPS write. This was a steady improvement over both previous-generation models.

Comparing latency consistency between each drive in a 4K random workload in our latency standard deviation section, the ES.3 ranked middle of the board on read latency (ES having the lead) and best in write latency.

Compared to the fixed 16 thread, 16 queue max workload we performed in the 100% 4K write test, our mixed workload profiles scale the performance across a wide range of thread/queue combinations. In these tests we span workload intensity from 2 threads and 2 queue up to 16 threads and 16 queue. In the expanded 8K 70/30 test, the Seagate Constellation ES.3 had the highest measured performance, offering substantial improvements over both prior-generation models. At 2T/2Q performance measured 122 IOPS, which peaked at 217 IOPS at 4T/16Q. 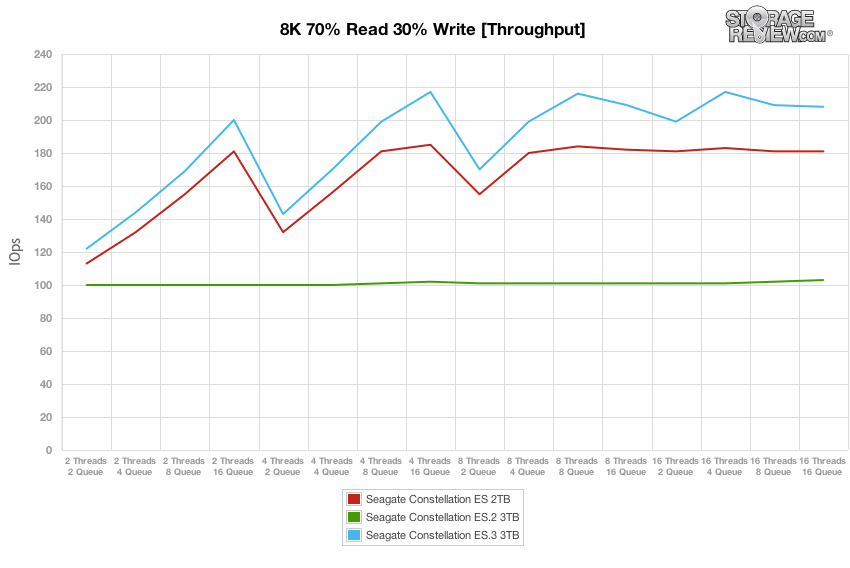 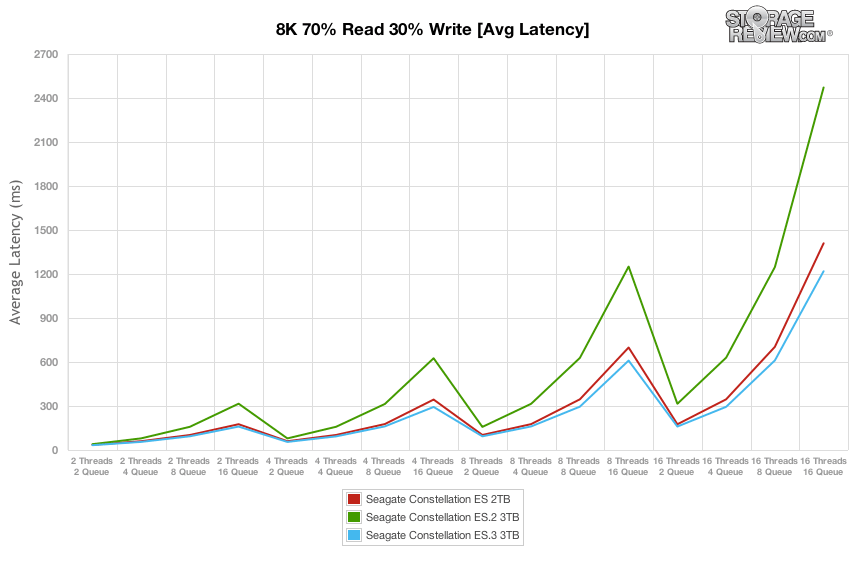 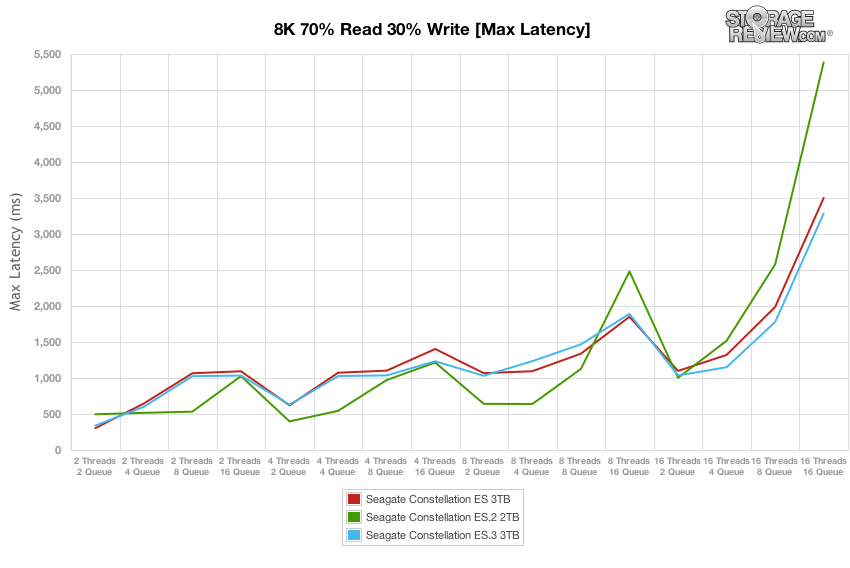 Looking at latency consistency between each model, the ES.3 had a small edge over the ES, although the ES.2 had a strong lead in this category. 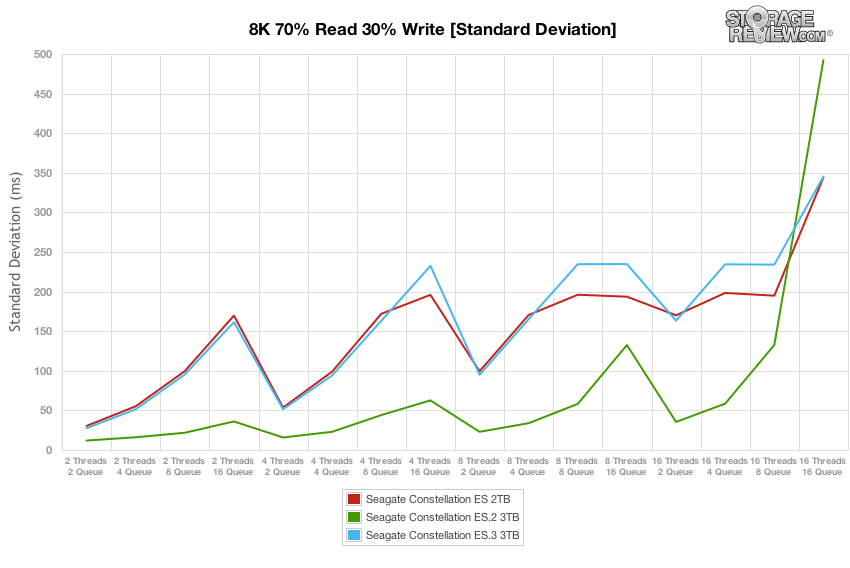 In our next test we look at performance in our File Server workload, which consists of transfer sizes ranging from 512-byte to 64K from loads of 2T/2Q up to 16T/16Q. In this section the Constellation ES.3 showed strong signs of improvement from the ES.2 and ES, dominating across the entire spectrum. 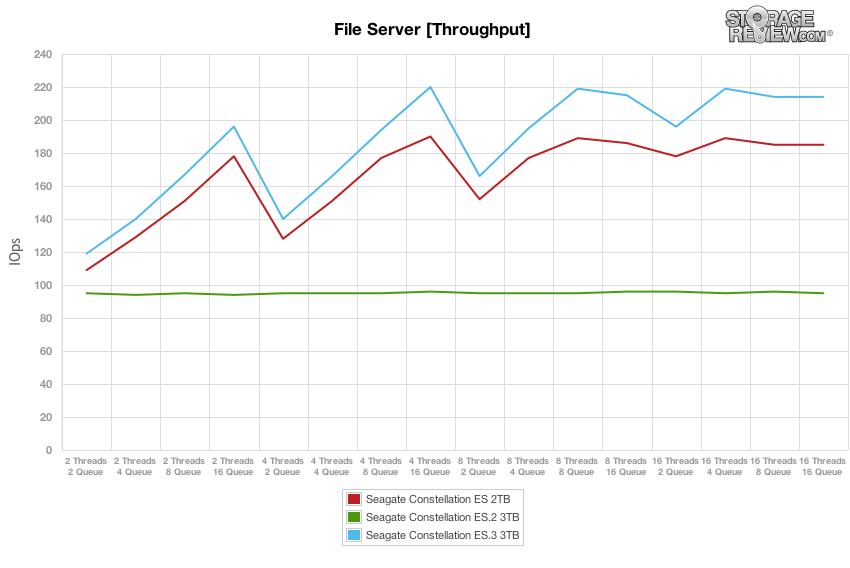 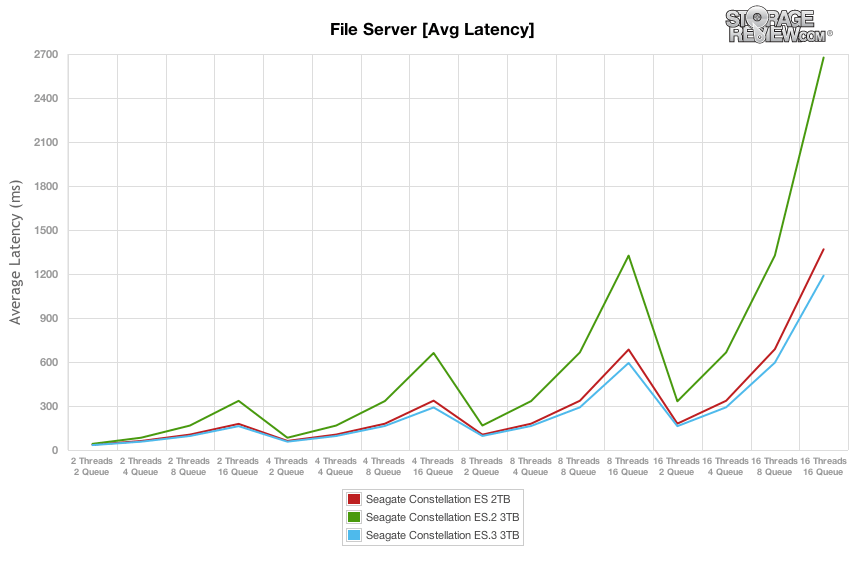 Comparing max latency between the different generations of Seagate Constellation HDDs, the ES.3 ranked middle of the pack, trailing the ES.2 which had lower peak response times. 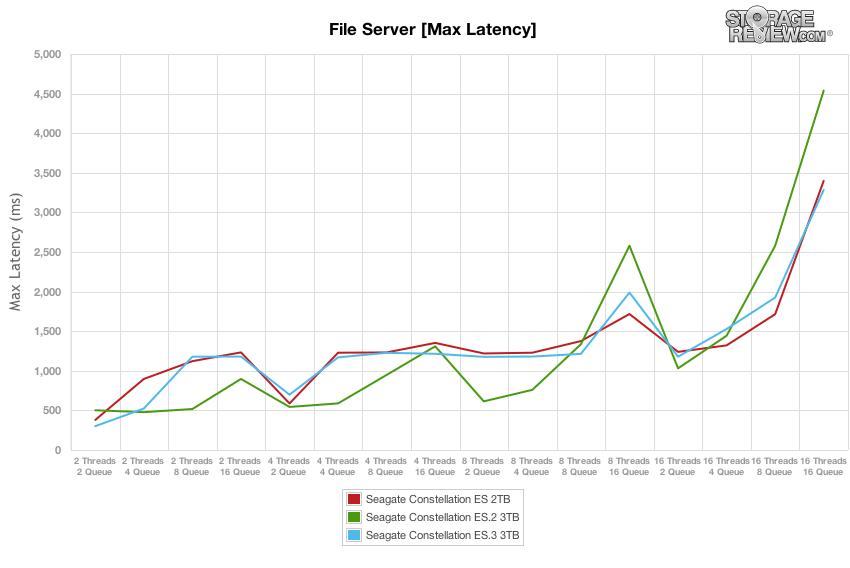 Switching from peak response times to latency consistency in our latency standard deviation chart, the Constellation ES.3 trailed both the ES.2 and ES models, with the ES.2 ranking the best across all loads. 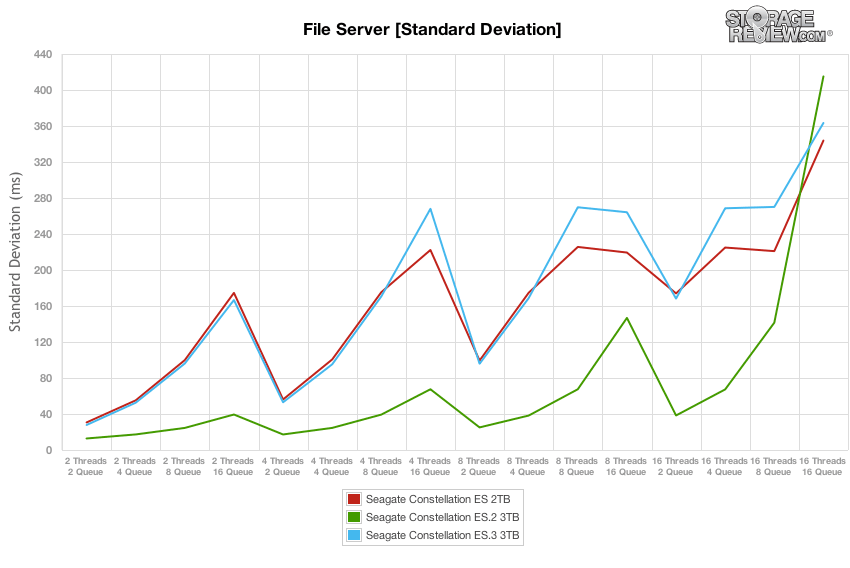 Our last test measures performance in a profile based on Web Server activity, which is setup to be read-only. In a measure of mixed 100% read performance with transfer sizes ranging from 512-byte to 512K, the Constellation ES.3 dominated the pack again, offering a substantial lead over the previous-generation models. 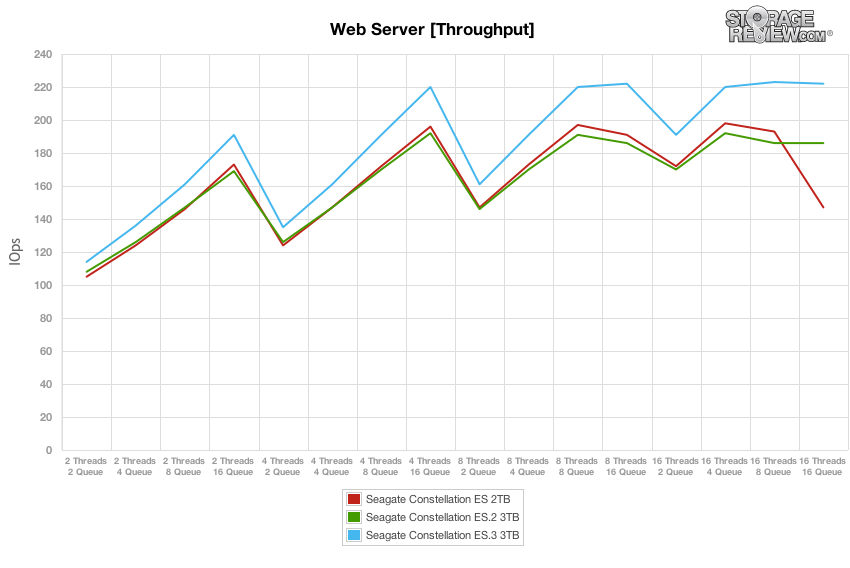 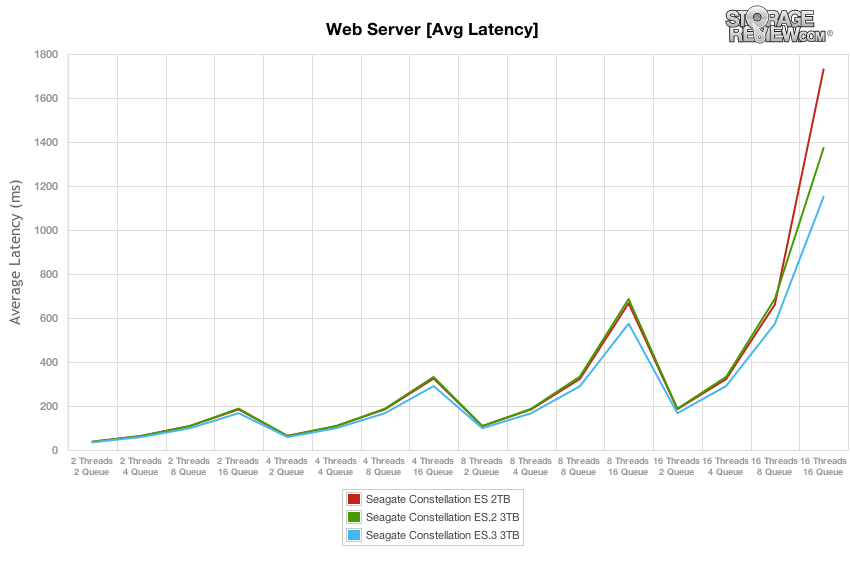 With a workload geared towards read activity, the Constellation ES.3 found its footing, having the lowest peak latencies in across most loads. 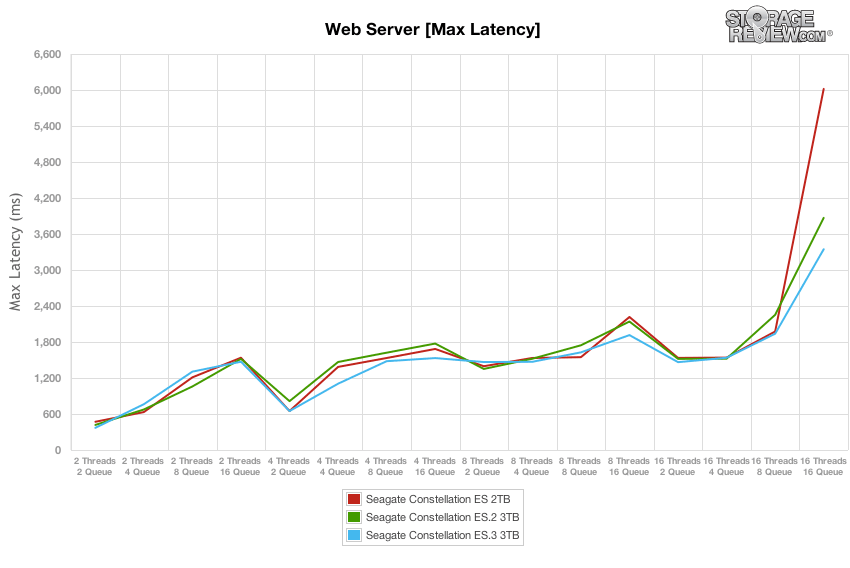 Similar to the improvement we noted in Web Server max latency, the ES.3 also had much better latency consistency in our read-only profile which led the pack from low to higher workloads. 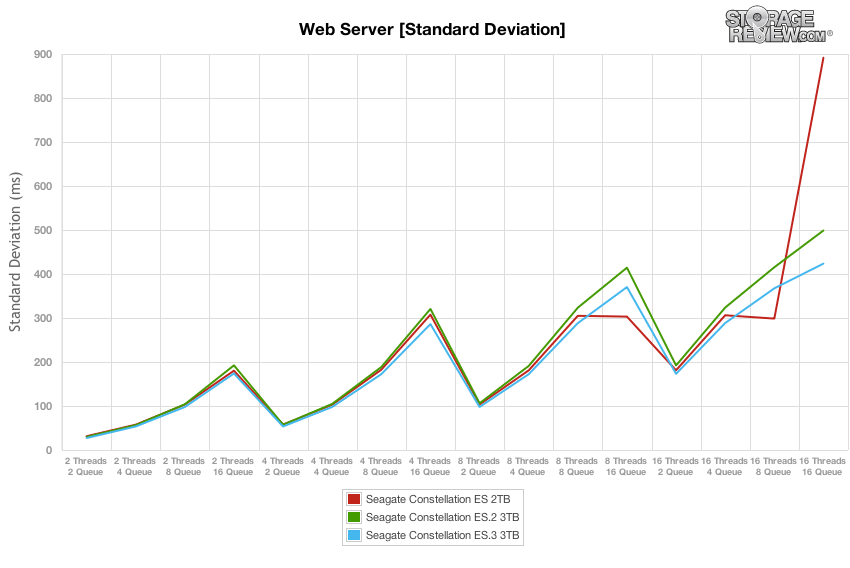 The Seagate Enterprise Capacity 3.5" hard drive line offers the top available capacity of 4TB, with several options ranging from SATA or SAS interface, to SED and FIPS security (SAS model only). The Constellation ES.3 also gets a bit of a performance upgrade over the ES.2 as well. Seagate quotes a 13% throughput gain; we saw a write improvement of 14.2% and a read increase of 12.7% in 128k sequential tests. Across the rest of our benchmarks we more or less found the ES.3 to top the prior generation drives in every test, showing Seagate has been able to eek out just that much more performance out of the platform that now offers 25% more capacity to boot.

With such a big improvement over previous-generation Constellations, it’s hard to find a negative comment about the ES.3. Getting really picky, the max latency and latency standard deviation were a bit higher than we would have hoped, but given the massive speed benefit it might not play a huge role in environments which these drives are put into production.

Given the top-side capacity of 4TB, SAS interface, and performance bump over the prior generation drive, the Seagate Constellation ES.3 provides a compelling value proposition in the performance 7,200RPM enterprise hard drive space.