The Supermicro SuperServer 1027R-WC1NRT is a high-performance, enterprise-class server with storage emphasis that supports SAS3 12Gb/s and NVMe interfaces. The chassis houses 10 hot-swappable 2.5" drive bays in a slim, 1U rackmount form factor that is ideal for dense computing environments. The 1027R-WC1NRT is made up of two main subsystems: the SC116AC2-R700WB 1U chassis and the X9DRW-CTF31 dual processor serverboard. In addition, the SuperServer is built around the X9DRWCF31/CTF31, a dual processor serverboard based on the Intel C602J chipset, which is designed to provide the performance needed for intense server workloads.

The Supermicro SuperServer 1027R-WC1NRT is a high-performance, enterprise-class server with storage emphasis that supports SAS3 12Gb/s and NVMe interfaces. The chassis houses 10 hot-swappable 2.5" drive bays in a slim, 1U rackmount form factor that is ideal for dense computing environments. The 1027R-WC1NRT is made up of two main subsystems: the SC116AC2-R700WB 1U chassis and the X9DRW-CTF31 dual processor serverboard. In addition, the SuperServer is built around the X9DRWCF31/CTF31, a dual processor serverboard based on the Intel C602J chipset, which is designed to provide the performance needed for intense server workloads.

The biggest draw of the SuperServer 1027R-WC1NRT is its support for two 2.5" NVMe SSDs, which are ideal for database or other latency-sensitive applications. Supermicro is one of the few companies that offers compatibility with NVMe drives; the only other mainstream server vendor to provide this unique forward-thinking technology is Dell, with servers like the PowerEdge R920, which supports up to 8 drives in a 3U chassis. In addition to this system, Supermicro has an extensive set of systems that support NVMe in their new X10 line as well. The two bays dedicated to NVMe PCIe SSDs allow the SuperServer 1027R-WC1NRT to offer a ton of flexibility, as the drives are designed to reduce latency and increase IOPS over standard SAS/SATA SSDs while still maintaining front-of-server serviceability. The other 8 bays remain usable for more typical storage needs and/or boot drive duty.

The SuperServer supports up to 1TB DDR3 ECC LRDIMM with a 1866MHz clock speed (16x 240-pin DIMM Sockets), and features a 700W power supply composed of two separate power modules for power redundancy. The chassis has an innovative cooling design, which is comprised of a fan tray that can hold up to six sets of 4cm counter-rotating 1U fans that are powered by 4-pin connectors (the chassis fan speed is controlled by IPMI software). The power supply module also features a cooling fan.

The herein reviewed Supermicro SuperServer 1027R-WC1NRT is comprised of 2x Intel 1.2TB P3600 NVMe drives and 8x SSD800MM 400GB SSDs in the other SAS3 bays; two of those are RAID1 for the OS while the other six are configured to RAID1 for storage.

Supermicro SuperServer 1027R-WC1NRT is a 1U form factor and certainly makes the most out of its slim build with 10 hot-swappable 2.5" SAS/SATA drive bays.

The control panel on the SC116AC2-R700WB provides important system monitoring and control information. LEDs indicate power on, network activity, and disk activity (there is also a Universal Information LED). Also present are a main power button and a UID button.

The I/O back panel of the 1027R-WC1NRT includes a VGA port, four USB 2.0 ports, two gigabit Ethernet ports, one dedicated IPMI port, an UID button and LED (both of which are located beside the PCI-E slots). The rear also houses the 700W power supply, which is composed of two separate power modules in order to provide power redundancy. This allows users to replace a failed power supply module without having to shut down the server.

The server is easily opened after loosening one screw on the back of the chassis cover, which then slides off completely. Inside the layout is very organized, with each component quickly accessible. On the far right side of the motherboard includes an assortment of SATA ports partially obstructed by the NVMe cabling routing on that side of the chassis.

A hidden gem that Supermicro included with this build is their SATADOM module, which is a miniaturized SATA device. They are available in 16, 32, and 64GB capacities and offer read speeds upwards of 530MB/s (similar to a standard SSD boot drive). These can be used for a number of embedded applications such as boot drive alternatives, backup software location for recovery or a number of other options where a unique storage device is required. 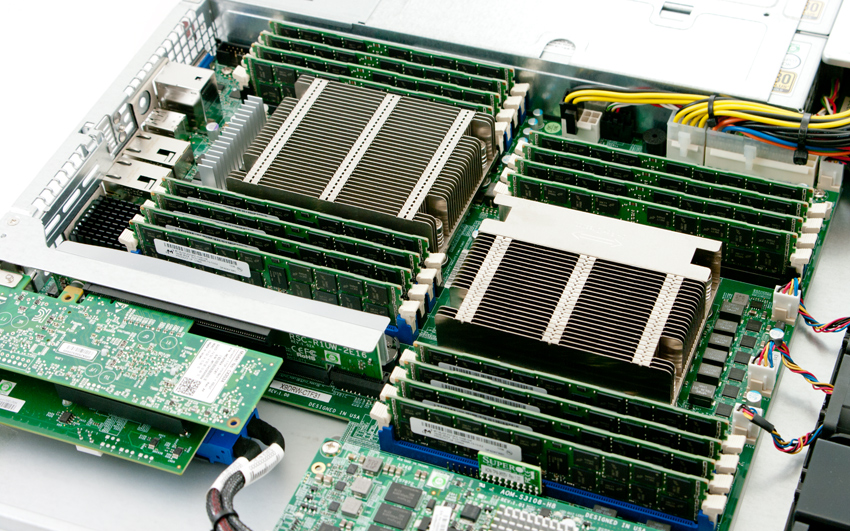 Supermicro also included their SuperCap with this server, which replaces fan module and is used for power backup for the LSI MegaRAID adapter. This puts it in a convenient position for cooling as well as servicing down the road.

In testing this server, the OS sits on a RAID1 group of HGST SSD800MM SSDs. The remaining 6 SSD800MM SSDs are tested in RAID10. The Intel P3600 NVMe SSDs are being tested in single and dual drive configurations. In dual drive scores the results of both drives are aggregated to provide the total performance.​

In our average latency tests of the same file size, the 2x Intel P3600 NVMe drive configuration was the top performer with 2.23ms write and only 0.29ms read. This beat out the 6x SSD800MM drive set up, though it had much better average write latency compared to the single Intel drive.

In our standard deviation benchmark, which helps to identify configurations that experience a greater-than-average range of latencies, the LSI RAID 6x SSD800MM configured in RAID10 once again had the best write performance with just 0.792ms. The 2x Intel P3600 drive configuration showed the best read results (0.17ms).

Next, we reconditioned the server for sequential 8k transfers to measure the performance of the Intel P3600 NVMe drives (as well as with both write through and write back caching techniques for the SSD800MM drives) with a load of 16 threads and a queue depth of 16 for 100% read and 100% write operations. In this benchmark, the clear top performer was the 2x Intel P3600 NVMe configuration with a massive 726,866IOPS read and 260,385IOPS write, both of which were well above the rest of the board.

Our next test is comprised of random 70% read operations and 30% write operations with an 8k workload across a range of thread and queue counts. For throughput, the 2x NVMe drive configuration boasted 134,867IOPS by 16T16Q, which was still well behind the 6x SSD800MM in RAID10. 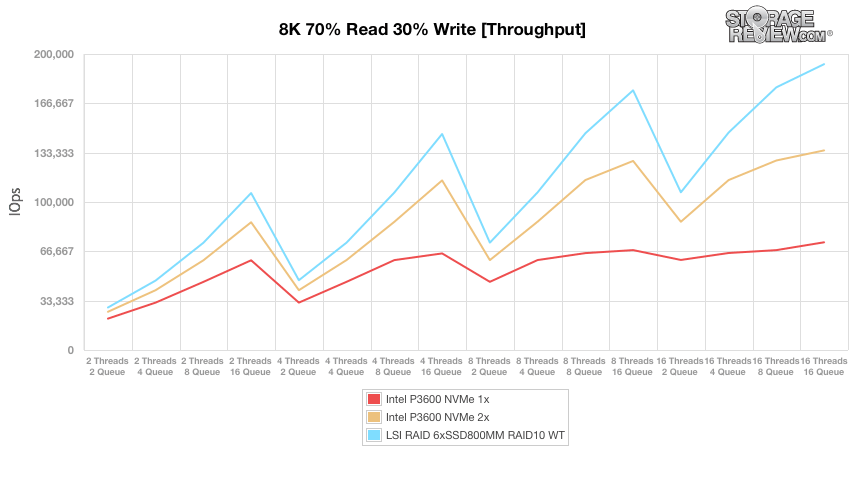 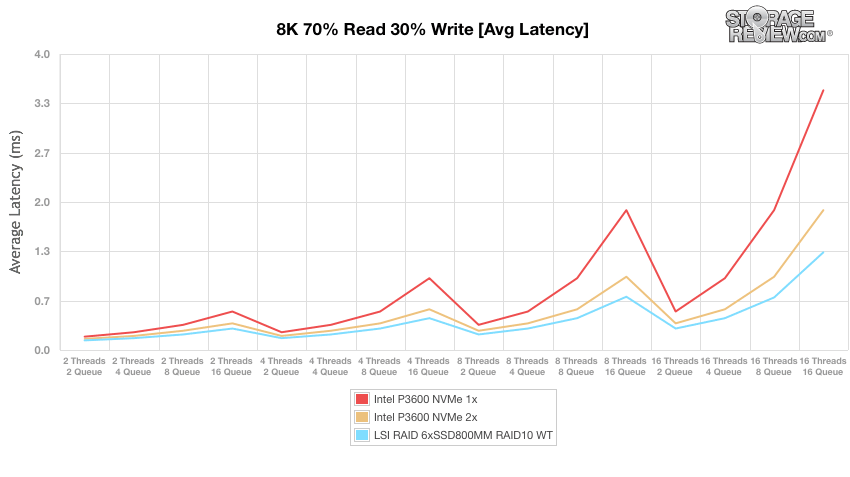 The max latency benchmark told a similar story, with the six SSD800MM drive setup taking the top spot. That being said, the 2x Intel drive configuration kept relative pace with the SSD800MM drives (with some of its latency even lower at times) up to the 8T/8Q mark. 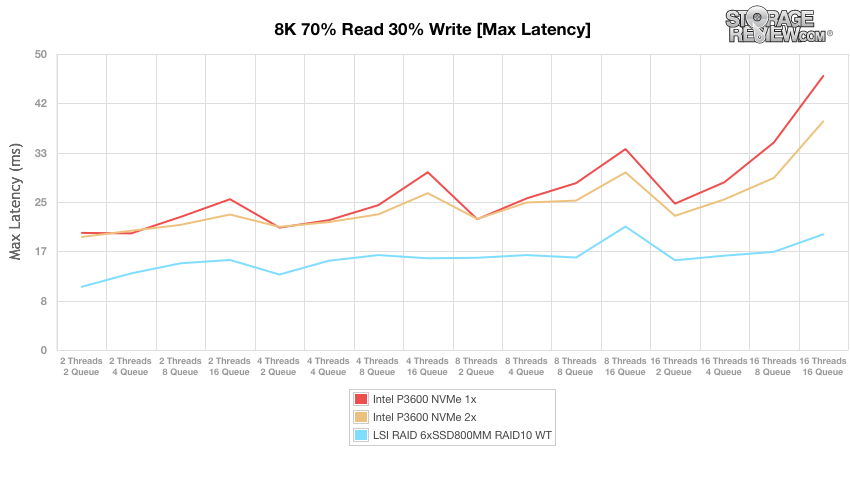 When recording standard deviation calculations for the 8k 70/30 benchmark, both the single- and double-drive Intel P3600 configurations had difficulty with high thread counts and queue depths compared to the SSD800MM. 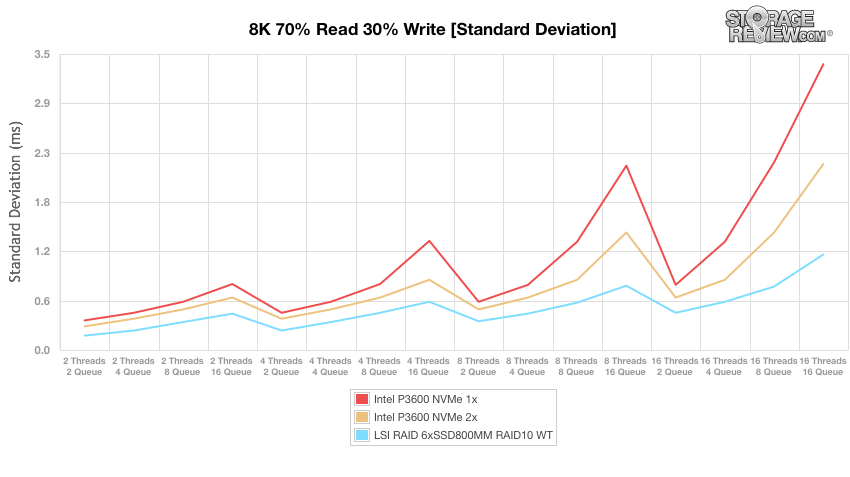 Our final synthetic benchmark is based on sequential 128k transfers with 100% read and 100% write operations. Here, the Intel P3600 NVMe 2x configuration achieved substantially higher throughput than its 1x configuration, posting 2,336,358KB/s in write operations with an incredible 5,879,600KB/s for read. We also measured the LSI RAID 6x SSD800MM in both write-back and write-through operations. The former posted a massive 6,427,400KB/s in writes (well above any of the other configurations) and 5,865,600KB/s for reads, while the latter recorded 1,662,156KB/s write and 2,702,029KB/s read.

The Supermicro SuperServer 1027R-WC1NRT is a an enterprise storage server equipped with 10 hot-swappable 2.5" drive bays in a slim, 1U rackmount form factor that consists of two main subsystems: the SC116AC2-R700WB 1U chassis and the X9DRW-CTF31 dual processor serverboard. The SuperServer 1027R-WC1NRT offers a ton of flexibility due to its support of both SAS3 12Gb/s and NVMe drives, the former of which uses a PCIe interface in a 2.5" form factor. The NVMe drives are unique because they provide front-serviceability while delivering PCIe card-like performance, which is significantly faster than SAS/SATA offerings of the same form factor. Most servers only support a few NVMe compatible bays (two in the case of this Supermicro SuperServer), due to the extra hardware needed inside the chassis to handle the connections to the front. However, the net result for these drives is stunning, and the Intel NVMe SSDs really shine within this system.

To test its performance, we outfitted the SuperServer in an optimal configuration to take advantage of all 10 bays with the best options available for each. We tested the Intel P3600 1.2TB NVMe drives individually and as two drives in aggregate, along with six HGST Ultrastar SSD800MM 400GB SSDs (both write through and write back operations) attached to an LSI RAID controller card for RAID1 and RAID10 configurations. As expected, the combination of the two Intel NVMe drives allowed the SuperServer to boast a tremendous amount of throughput as well as low latency. This was most evident in our 100% read and 100% write 4k, 8k, and 128k transfer benchmarks, where it consistently offered twice the read throughput of the other configurations.

The net result is that Supermicro provides a dense platform that can drive a tremendous amount of throughput thanks to its pair of NVMe drive slots. The rest of the SAS3 bays aren't exactly slouches either though, especially when paired with class-leading SSDs like the HGST drives we used. The 10 bays in total offer a lot of options when it comes to segmenting data for latency-sensitive applications, or using some combination of flash and HDDs or low-cost SSDs in a tiering configuration. The main downside with the platform is that it only has two NVMe bays, though Supermicro does offer larger 2U systems that support four of the high-speed drives. That said, considering the industry is somewhat devoid of options when it comes to NVMe support, having two drives in a 1U system is a good starting point for the emerging technology while Supermicro evaluates adoption and where to innovate next.

The Supermicro SuperServer 1027R-WC1NRT is a high-end storage system that offers enterprises significant versatility thanks to its compatibility with both SAS3 12Gb/s and NVMe drives, the former of which allows for huge performance gains for heavy application workloads.