We’ve been reviewing portable drives for almost a decade now. Over that span, we’ve seen the market transition from hard drives to flash. At the same time, we’ve seen the workloads for portable SSDs become more intensive. It’s common to see a portable SSD strapped to the side of a digital camera on a set or perpetually helping a scientist crunch data in real-time in the field. The problem, though, when deciding on a drive in this class is that vendors only show burst performance on the datasheet. So we set out to punish the current set of portable SSDs from popular brands to see just how well they hold up under severe stress.

We’ve been reviewing portable drives for almost a decade now. Over that span, we’ve seen the market transition from hard drives to flash. At the same time, we’ve seen the workloads for portable SSDs become more intensive. It’s common to see a portable SSD strapped to the side of a digital camera on a set or perpetually helping a scientist crunch data in real-time in the field. The problem, though, when deciding on a drive in this class is that vendors only show burst performance on the datasheet. So we set out to punish the current set of portable SSDs from popular brands to see just how well they hold up under severe stress. 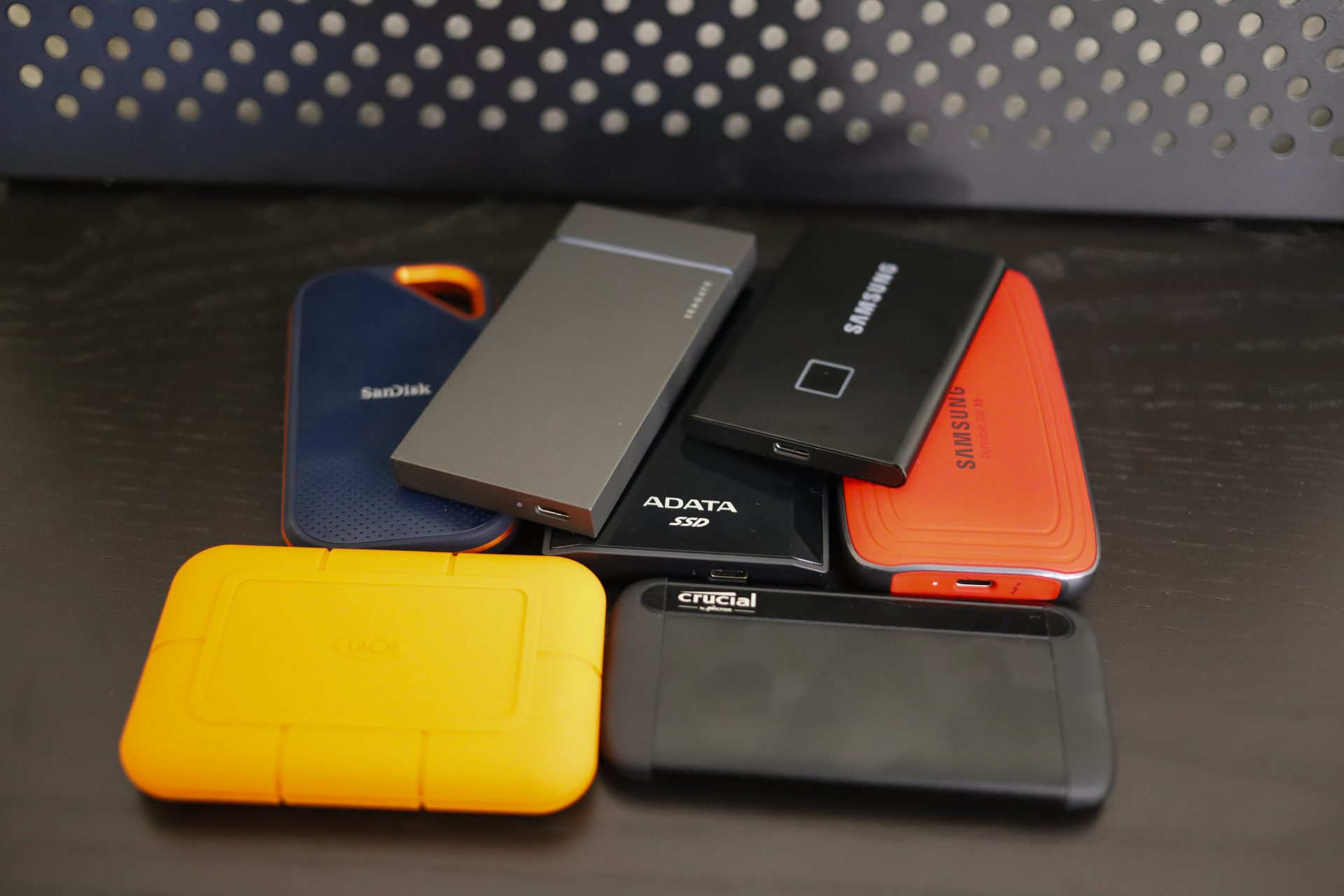 The State of Portable SSDs

Portable SSD drives are designed for both home use and when on the go. They are faster, more durable, and smaller than portable hard disk drives (HDDs) because they have no moving parts. They are the right option for those looking for a versatile solution, particularly a more universal USB-C drive that doesn’t compromise storage capacity or high speed. 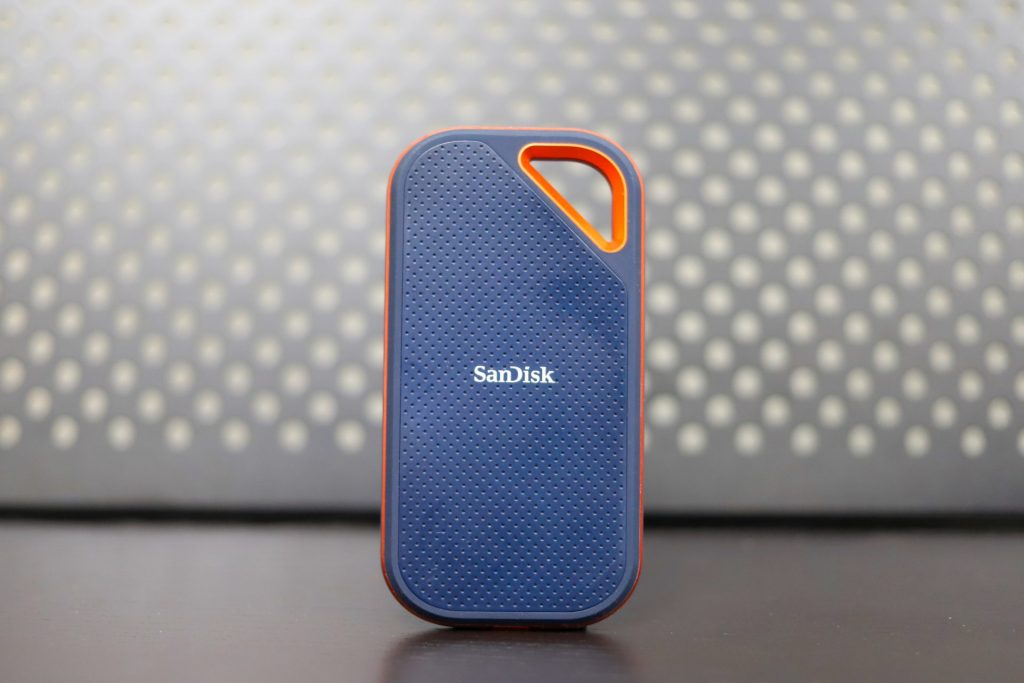 On paper, the performance of these devices is thrilling, with brands quoting impressive numbers of up to 2.8GB/s for Thunderbolt SSDs like the Samsung X5. But there are mainstream offerings as well, we recently reviewed SanDisk’s latest offerings. SanDisk upgraded the Extreme and Extreme Pro Portable SSDs by doubling the data transfer speeds over the last-generation models. The Extreme Portable SSD now reaches read speeds of 1.05GB/s and write speeds of 1GB/s over a universal USB-C port. 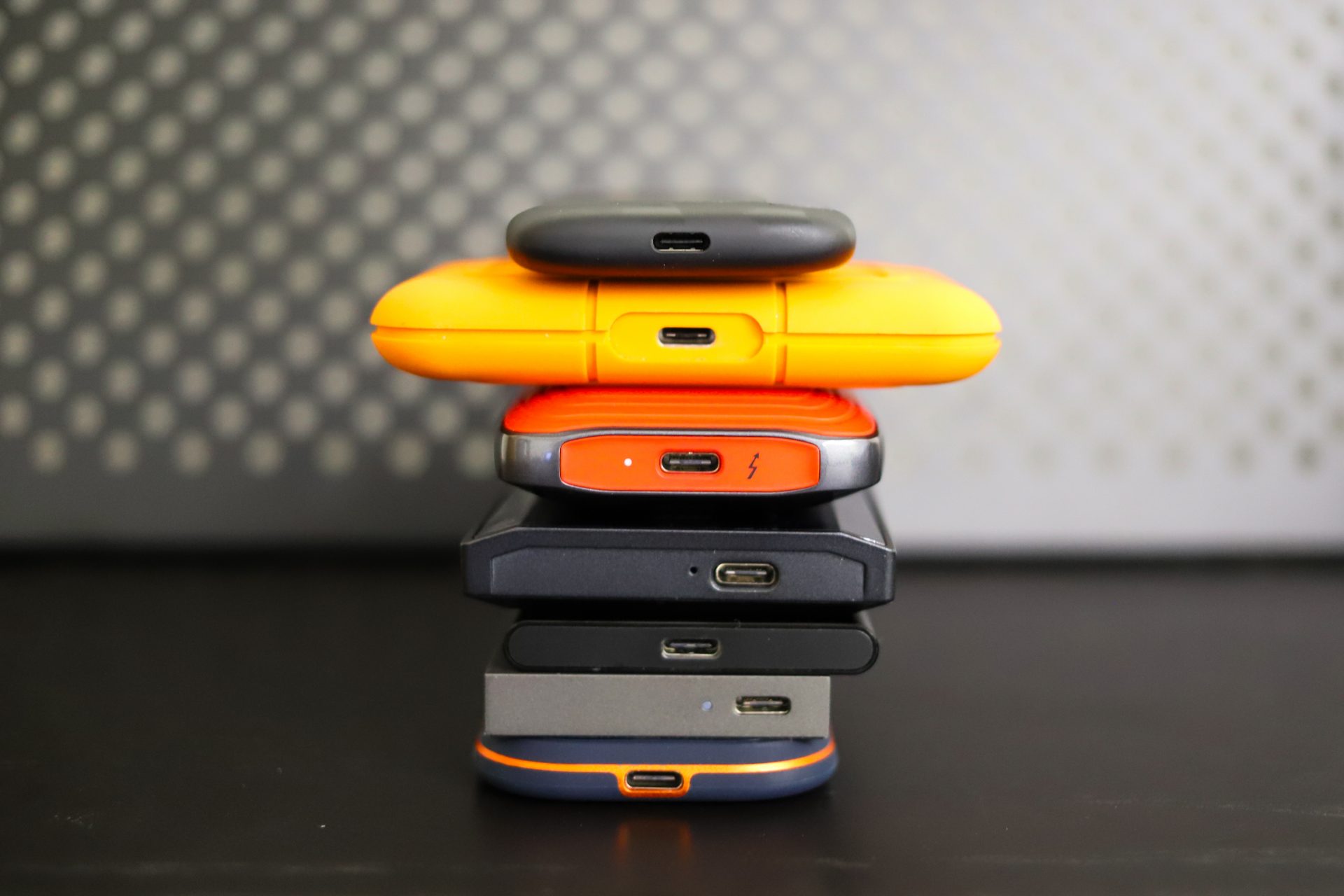 Thanks to these impressive performance profiles, high-performance SSDs are ideal for photographers, videographers, and heavy-duty users who constantly take images or 4K video content and need extra space to offload the data. Furthermore, if editing multicam footage, 8K video, higher quality codecs, or gaming is required, read/write speeds greater than 1GB/s is recommended.

As you might presume at this point, it can get tricky to find a drive that meets the performance requirements of professional applications. Due to the falling rates of SSD prices, you can get a fast external drive with a lot of storage capacity for less than you might expect. However, the cost is not a real problem here.

There is another critical concern among users that have a performance need. These drives can get extremely hot when transferring data for extended periods of time. As a result of the heat, performance will drastically drop as the drives throttle themselves in an act of self-preservation. When this happens, users quickly understand that actual sustained performance strays quickly from the stats promoted on a drive’s datasheet.

Portable SSDs are tested to operate within acceptable ambient temperature ranges (commonly 0º C – 25º C). In environments that are on the higher end of this tested temperature range, it is normal for the drive’s temperature to increase close to the edge of its internal operating limits.

Since portable SSDs don’t typically have any active cooling from fans, portable SSD design for passive cooling is critical. The device’s enclosure functions as a cooling surface that transfers heat from the NAND and controller inside the case to the cooler air outside. However, if the temperature of the ambient environment is high, the drive will fail to release enough heat to stay within its operating temperature range.

An increase in drive temperature is also normal if the SSD drive transfers large files or multiple files over a lengthy period of time. Large file transfers may take an extended time to complete and require more energy than a small file transfer. Numerous file transfers that are completed over a short period can generate a similar amount of energy. During these operations, the interior temperature of the drive increases, and the drive will release more heat through the drive’s exterior.

The material of a portable SSD enclosure and sometimes heat sync, is also critical. Metal absorbs more heat than plastic materials and releases heat when used at a faster rate. Therefore metal drives may feel hotter than drives made out of plastic materials used in the same way. This is due to design though, as the metal draws more heat off the drive.

As a result of SSDs getting warm, most SSD controllers include an internal thermal sensor alarm. In the event of temps running hot, a drive’s firmware will cap performance and slow transfer rates to prevent them from getting too hot and damaging the device itself. This is known as thermal throttling. SSD temperature is correlated with the power used to transmit data across the interface, which can potentially be used as a proxy for temperature in the absence of SSD temperature sensors.

Like the rest of the electronics industry, engineers are designing SSDs to handle more chips, more channels, more cores, and more controllers. I.e, they are designing SSDs to take on a greater level of processing capability. What’s unfortunate about this is that thermal throttling is most likely to occur when the portable SSD is being worked hard, precisely when the user wants the highest performance. If the application or software doesn’t work the drive hard, then thermal throttling is less likely to occur, but that’s when its impact on performance would be least unacceptable.

Evaluating the sustained performance and heat management of these devices is an essential part of our benchmark process. The last thing users want to see when moving data to portable SSDs is the transfer rate going to USB 2.0 speeds.

To identify whether the portable SSD drives under test suffer from severe performance drop problems, we precondition the SSDs. We do this by applying workloads to move it from the initial fresh-out-of-the-box state to a state where the device’s actual performance is. This process is the most time-consuming because it requires applying workloads to the drive several times. It is necessary to measure the performance of the SSD each time and observe how it changes. We preconditioned the drives with both random and sequential workloads.

Each of the SSDs under consideration is the 1TB class SSD. All of these SSDs are modern offerings from key vendors. While this is not an exhaustive list of SSDs, it is comprehensive, especially when evaluated against market share.

All USB devices were tested through our Lenovo ThinkStation P520 with an Orico USB 3.2 Gen2x2 add-on adapter to support the newer interface.

The first test applied to the group of drives is our 4K random write preconditioning test. This is applied for 6 hours to cause each drive to hit its steady-state performance figure. In a preconditioning curve, each drive starts in what we consider its “burst” or fastest transfer rate and slowly drops to its final steady-state number. We used the FIO workload generator to apply the workload in 360 1-minute intervals, with each point on the chart representing that 1-minute interval. 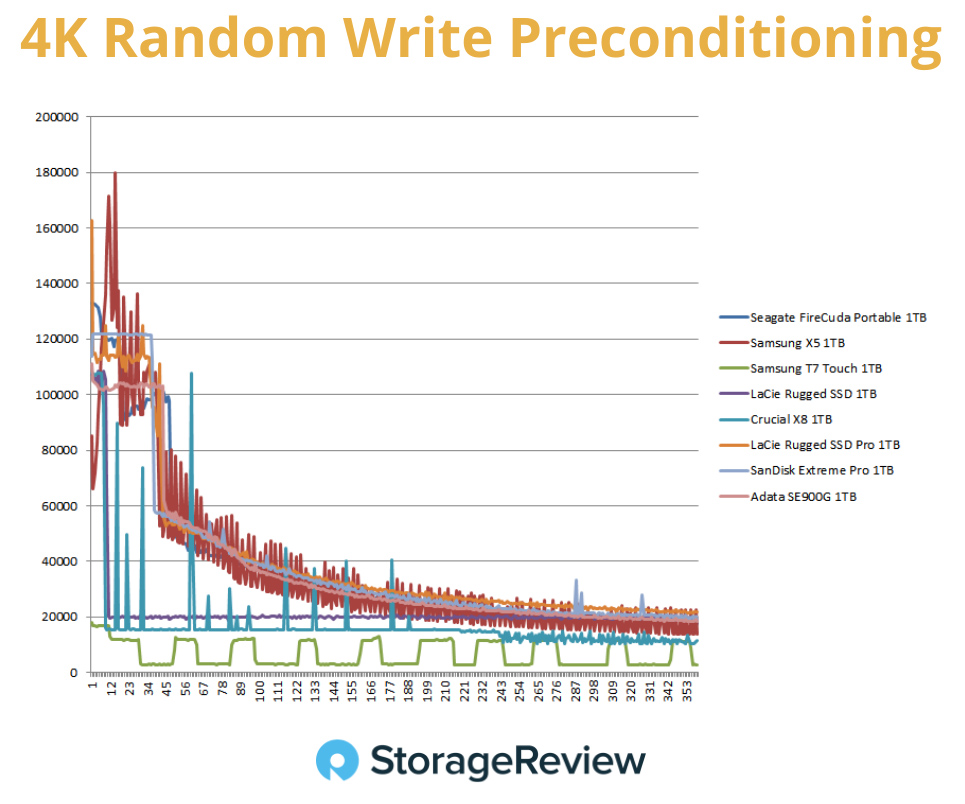 The chart shows transfer rates achieved during each individual write test according to the total elapsed write time when that test started. During the first 1.5 hours of writing, transfer rates remained steady at about 94,800 IOPS. After 1.5 hours had elapsed, rates fell to around 43,000 IOPS, reaching nearly 21,000 IOPS before the end of the six-hour test.

What is important to note is that these numbers never spiked significantly during the preconditioning. The SanDisk Extreme Pro drive kept a sustained performance during the two notable phases of the test. It is also good to note the LaCie Rugged SSD Pro and Seagate FireCuda Portable. These devices also performed very well during the steady-state, but not as well as the SanDisk Extreme Pro throughout the preconditioning.

Switching to our steady-state sequential workload, we move to a 128K transfer size with FIO, keeping the same 360 1-minute interval length we used in the 4K random workload. We see each drive is able to hang on to higher performance versus the fast drop-off found in the random workload. With large data rates in play, this is another area where thermal management has a key role. All drives got hot in this test, some slightly more than others. To better view the data between the two drive types, we charted the two Thunderbolt 3 drives separate from the USB 3.2 Gen2x2 models. The Thunderbolt drives simply had too much variability to overlay with the USB SSDs. 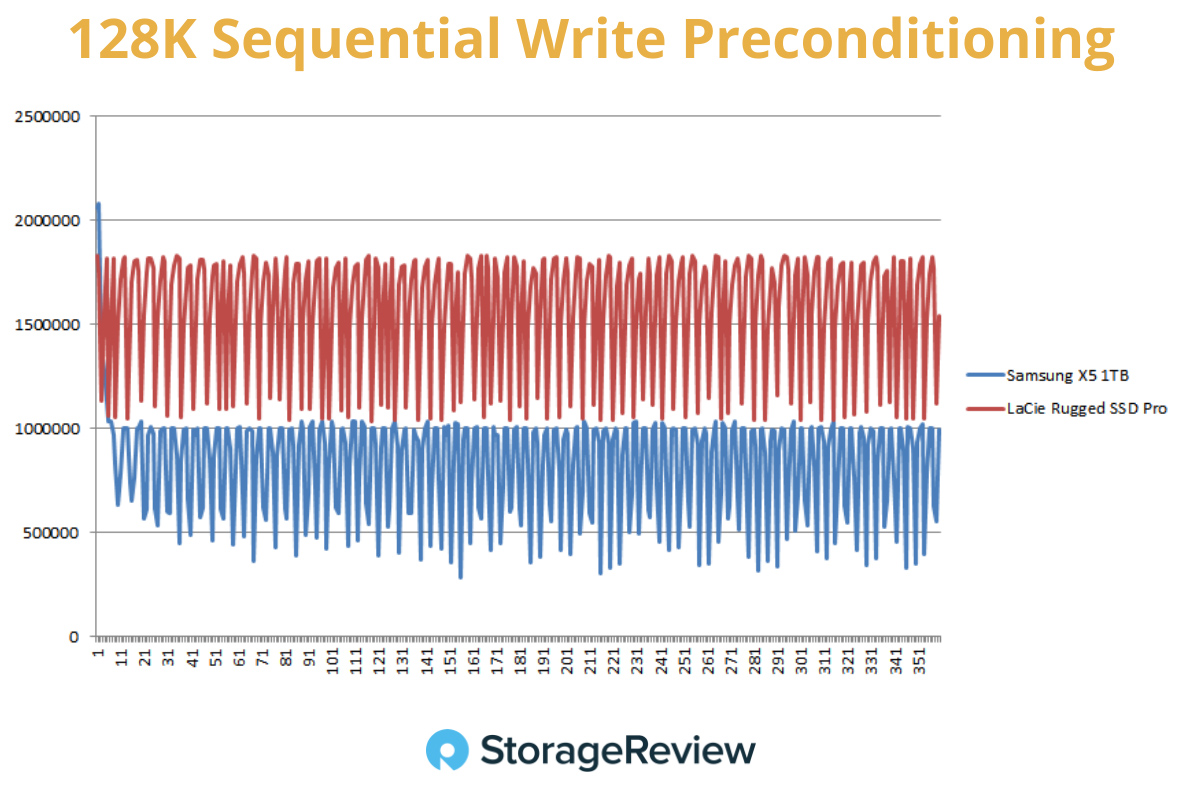 The Thunderbolt-based Samsung X5 kicked off our sequential write test with the highest burst speed, but it was short-lived for just a couple of minutes before starting its tell-tale erratic performance profile. Second was the Seagate FireCuda Portable that offered just over 1.9GB/s for about 45 minutes, before dropping off to around 1.54GB/s. 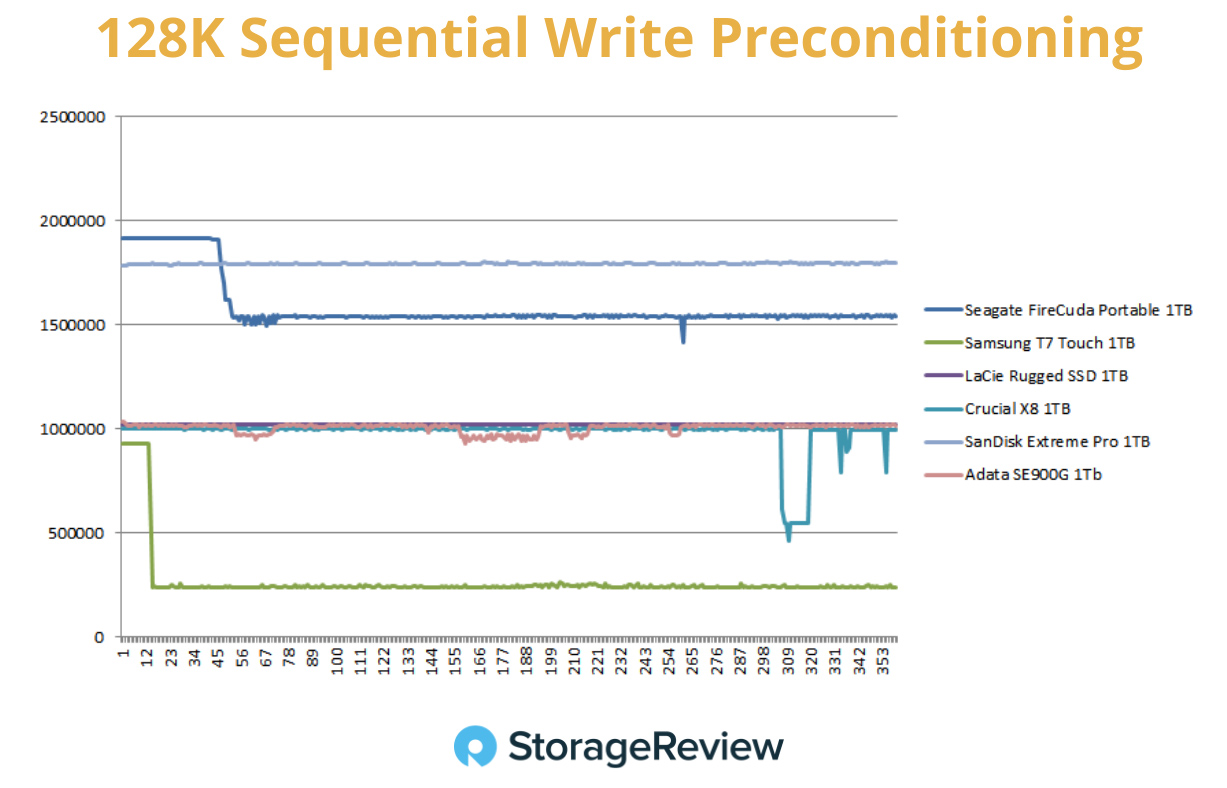 The SanDisk Extreme Pro started off in third, but maintained the highest performance profile over the 6-hour duration of the test, barely budging off its 1.79GB/s write speed. At the bottom of the workload, the Samsung T7 performed the lowest at about 240MB/s, which wasn’t a huge surprise after its position in the 4K random workload as well.

After each SSD finishes the 6 hour stretch of write workload, it is in a steady-state to measure its final respective write followed by a read test. The test is supposed to be performed without a break after the preconditioning stage to avoid the background garbage collection that may affect the test results. The results from this performance test can be used to describe the actual SSD performance and can be used to compare this device with others and also theoretical limits quoted by vendors. 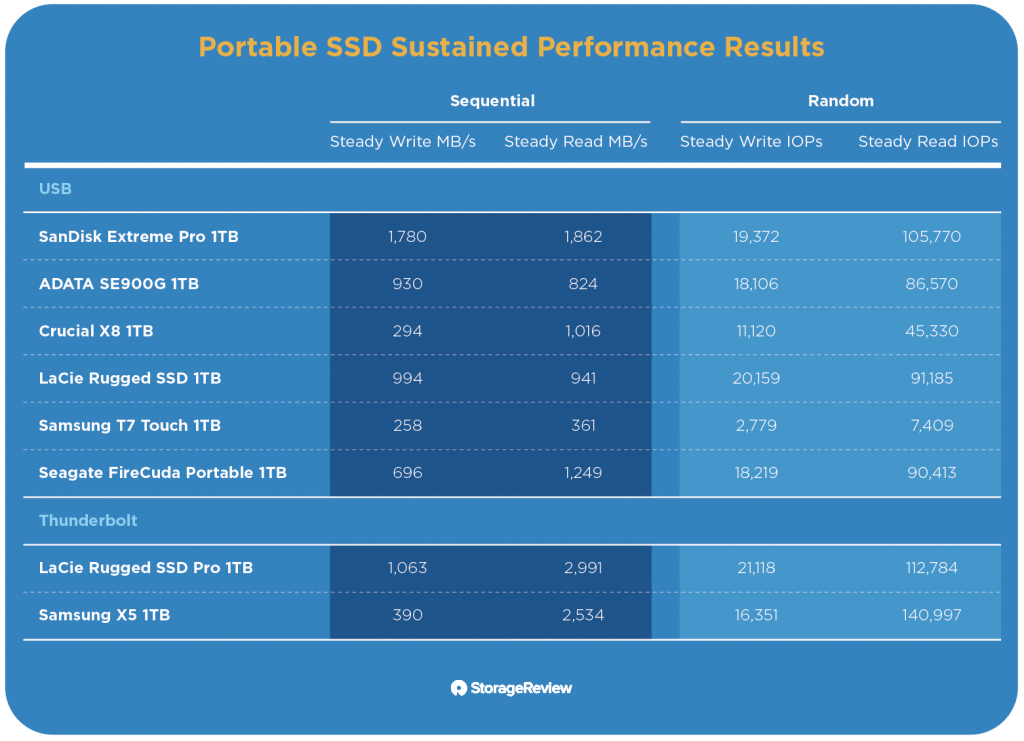 One of the most ambiguous aspects of external SSD drives is the sustained write performance during heavy workloads. Factors that influence their speed include thermal throttling and firmware caps built in to avoid overheating or other similar scenarios. After researching some of our top portable SSD options and testing the nine most promising candidates, we found that last year’s updated SanDisk Extreme Pro v2 is an excellent overall option.

SanDisk Extreme Pro v2 offers the best mix of capacity and sustained performance against its peers, thanks to its heat management solution. Users shouldn’t worry about the amount of heat it generates. This device’s enclosure temperature, while warm, never got to the crazy heat throughout our test. But most importantly, during high temperatures, this device manages to keep a high sustained performance.

Creative pros and others that really work their portable SSDs to the limit should take notice of this data. The speed on the box of the drive highlights the best-case scenario. As we’ve seen under heavy load, the engineering of the SSD takes over as critically important. This is more true than any other drive spec, including interface. In our testing, the SanDisk Extreme Pro v2 did exceedingly well when it comes to delivering consistent, sustained performance.