The Toshiba HG6 is a dual entry-enterprise and enterprise client SSD that is designed for high-performance, high reliability, and power efficiency for OEM systems. Available in capacities up to 512GB, the Toshiba HG6 SSD is offered in the five standard form factors (2.5" 7.0mm, 2.5" 9.5mm, mSATA, M.2 2280-D2 Double-Sided, and M.2 2280-S2 Single-Sided), allowing the diverse line of SSDs to satisfy a plethora of use cases.

The Toshiba HG6 is a dual entry-enterprise and enterprise client SSD that is designed for high-performance, high reliability, and power efficiency for OEM systems. Available in capacities up to 512GB, the Toshiba HG6 SSD is offered in the five standard form factors (2.5" 7.0mm, 2.5" 9.5mm, mSATA, M.2 2280-D2 Double-Sided, and M.2 2280-S2 Single-Sided), allowing the diverse line of SSDs to satisfy a plethora of use cases. 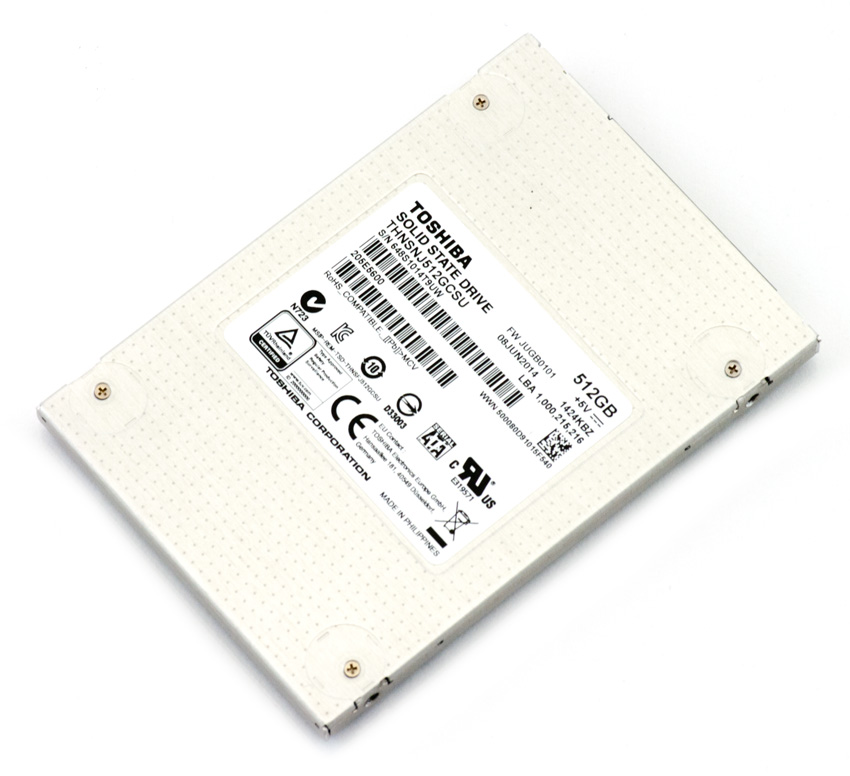 The HG6 is designed with Toshiba A19nm Toggle NAND and supports a SATA 3.2 interface. Toshiba’s new line of SSDs features the low power Devsleep feature allowing them to go into a low power "device sleep" mode in client systems, end-to-end data path protection to increase error detection to the entire file transfer path (from the computer to the hard drive and back), and Toshiba’s proprietary QSBC error correction (Quadruple Swing-By Code), which offers a powerful Error Correction Code that helps to protect against any read errors on the SSD.

The design of the HG6 is in line with Toshiba’s other line of HG client SSDs (HG5d); it is simply a grey, all-metal enclosure with basic information and branding on the front of the drive. This minimalistic and unattractive design is common for client-grade SSDs, since function is Toshiba's primary concern. 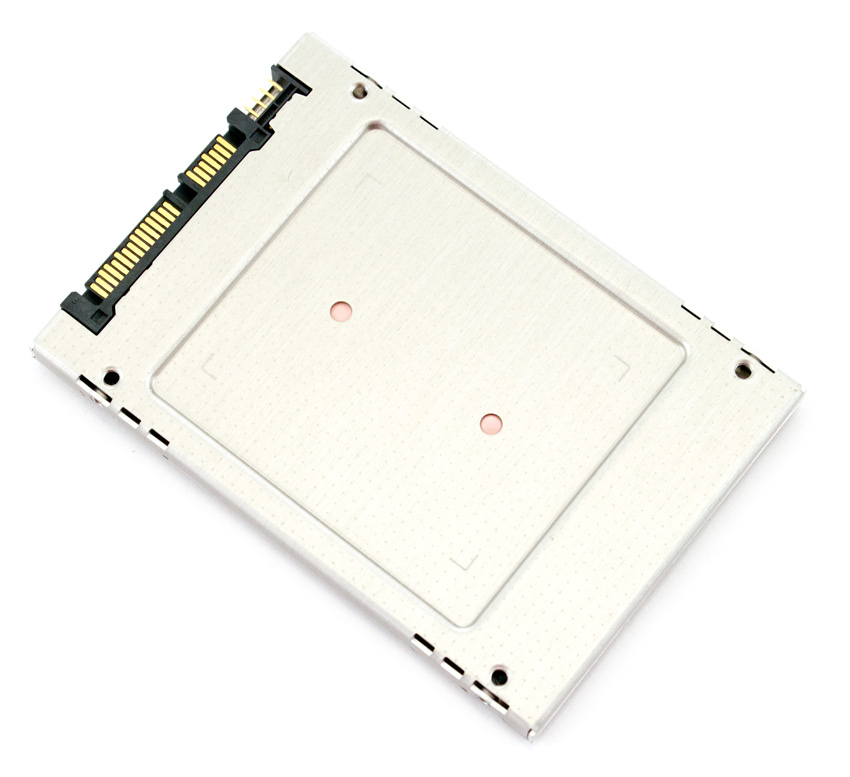 The side profiles show four screw holes that allow the HG6 to be easily mounted, and the drive is held together by four screws located on each corner of the front panel. Removing the screws opens up the drive. 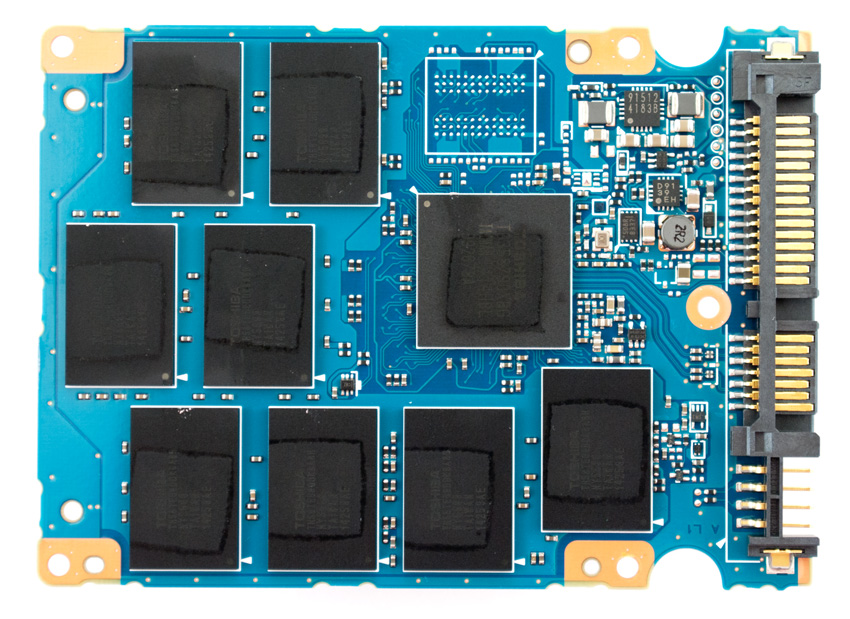 The HG6 uses a Toshiba controller for all capacities while the storage comes from the SSD’s use of Toshiba A19 MLC.

In order to understand the performance characteristics of enterprise storage devices, it is essential to model the infrastructure and the application workloads found in live production environments. Our first three benchmarks of the Toshiba HG6 are therefore the MarkLogic NoSQL Database Storage Benchmark, MySQL OLTP performance via SysBench and Microsoft SQL Server OLTP performance with a simulated TCP-C workload.

Our MarkLogic NoSQL Database environment requires groups of four SSDs with a usable capacity of at least 200GB, since the NoSQL database requires roughly 650GB of space for its four database nodes. Our protocol uses an SCST host and presents each SSD in JBOD, with one allocated per database node. The test repeats itself over 24 intervals, requiring 30-36 hours total. MarkLogic records total average latency as well as interval latency for each SSD.

In our overall average latency tests using our MarkLogic NoSQL database benchmark, the HG6 performed well below par, taking second-to-last among our comparables. 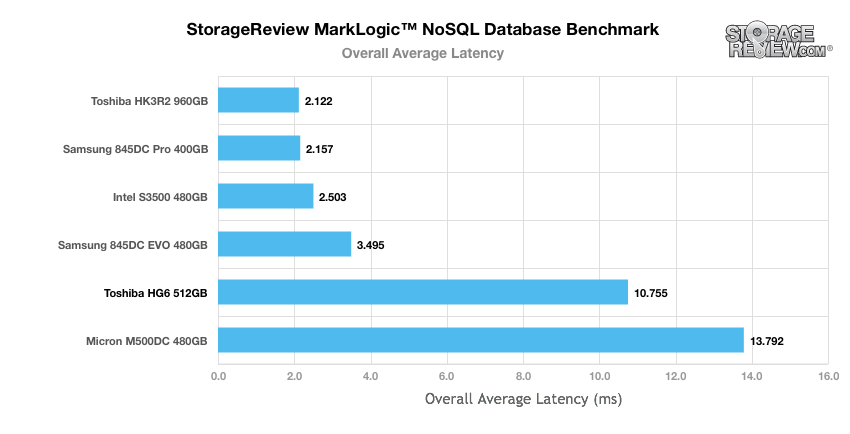 Again, the HG6 posted weak results in our MarkLogic benchmark, this time in average latency, as it reached almost 90ms by the end of the test. 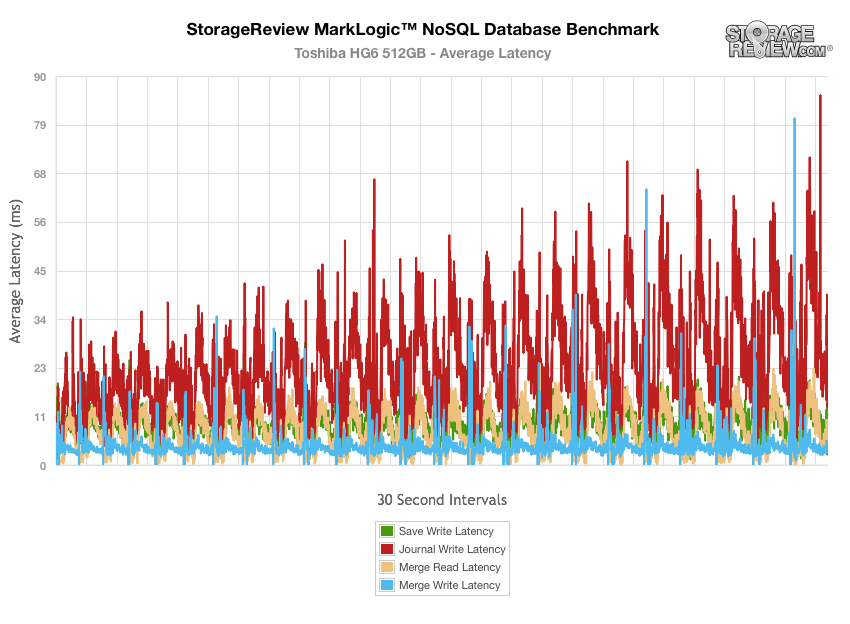 The next application benchmark consists of a Percona MySQL OLTP database measured via SysBench. In this configuration, we use a group of Lenovo ThinkServer RD630s as database clients and the database environment stored on a single drive. This test measures average TPS (Transactions Per Second), average latency, as well as average 99th percentile latency over a range of 2 to 32 threads. Percona and MariaDB are using the Fusion-io flash-aware application APIs in the most recent releases of their databases, although for the purposes of this comparison we test each device in their "legacy" block-storage modes.

In our average transactions per second benchmark, the Toshiba HG6 had an initial IOPS of 246.37 and ended with 1,287.65 IOPS, which was good enough for middle-of-the-pack standing. Its cousin, the Toshiba HK3R2, posted the best results. 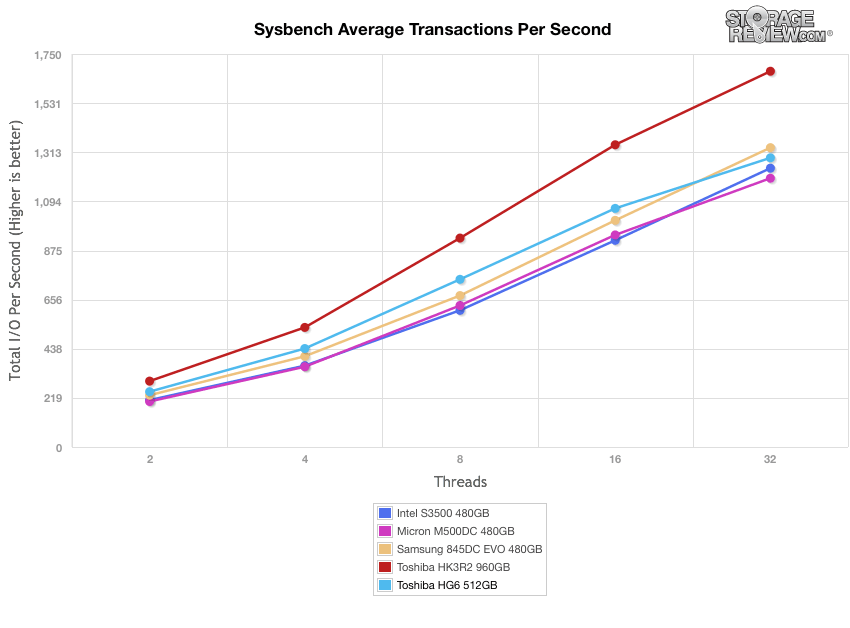 In our Sysbench Average Latency benchmark, the Toshiba HG6 boasted decent results with 24.85ms by 32T. The top performer here was the Toshiba HK3R2, peaking with just over 19ms. 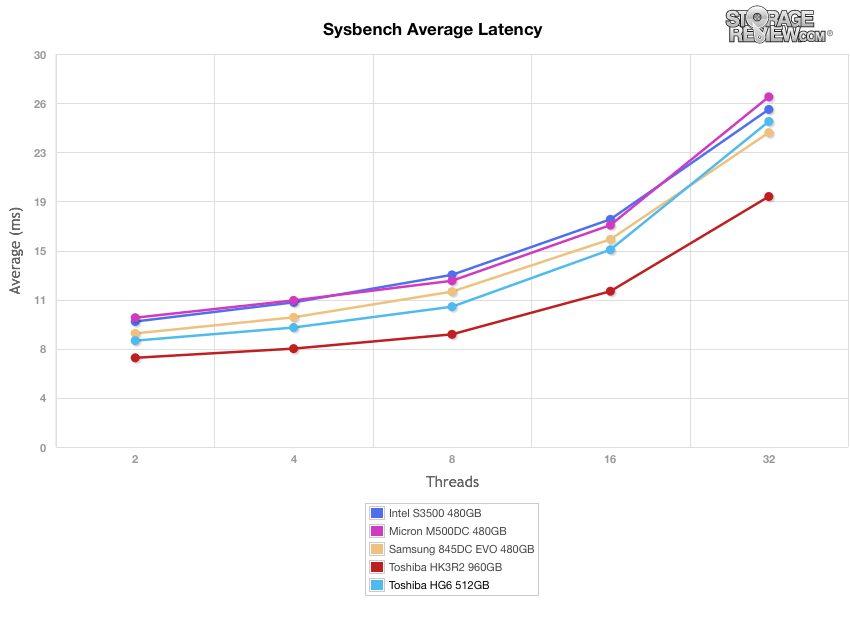 In our worst-case MySQL latency scenario, the Toshiba HG6 posted 64.15ms by 32T, which was last place among the comparables. The top performer here was the Samsung 845DC EVO with the Toshiba HK3R2 hot on its trail. 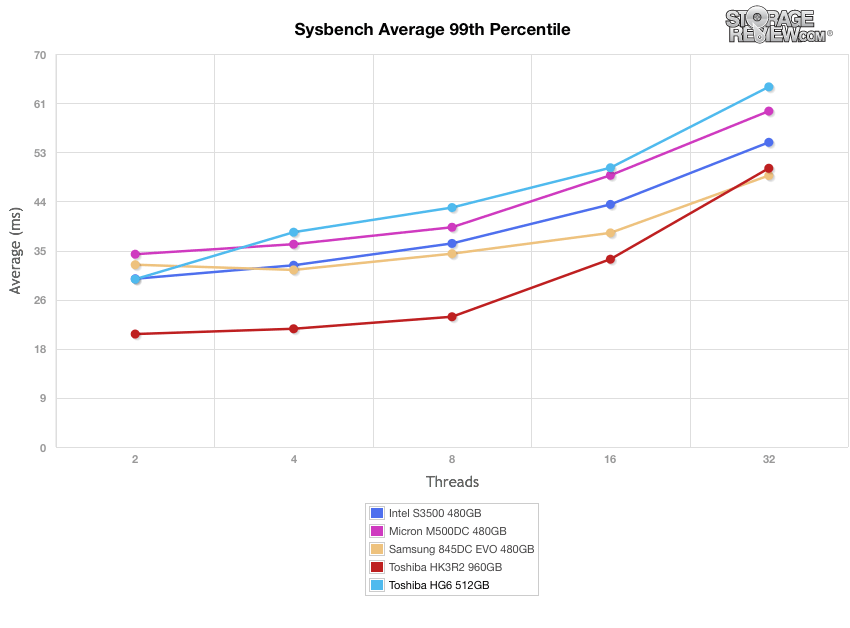 As you can see in the chart below, the HG6's SQL Server Output TPS performance was basically inconsequential compared to the other SSDs, with just 96.113TPS. Speaking with Toshiba on this issue, their focus with this particular model is more read-oriented than other SSDs in their portfolio such as the HK3R2. Even though it's marketed by Toshiba as an enterprise SSD, the HG6 is best put into enterprise client or server boot scenarios where the workloads are lighter and read-centric versus a more intensive database applications like SQL Server. 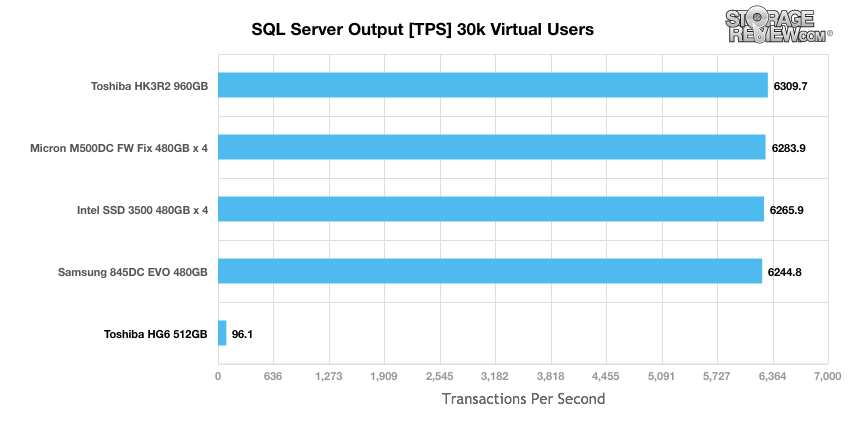 Results of our average latency under a 30k VU load mirrored that of the HG6’s TPS performance with results that were exponentially slower than that of the comparables. 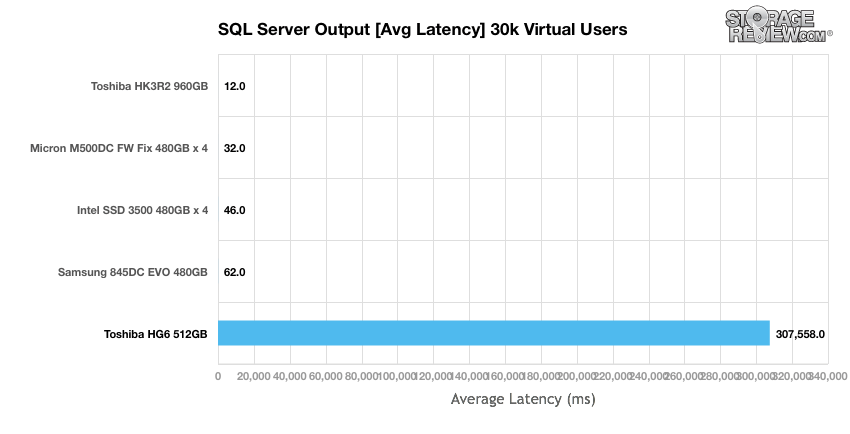 Once preconditioning is complete, each device being compared is then tested across multiple thread/queue depth profiles to show performance under light and heavy usage. Our synthetic workload analysis for the Toshiba HG6 uses 4k and 8k profiles which are widely used in manufacturer specifications and benchmarks.

During the 4K preconditioning process, the HG6 showed very weak results across the board. In our throughput benchmark, it wasn't able to reach the 6,500 IOPS mark whereas the average of the comparables was well above that. 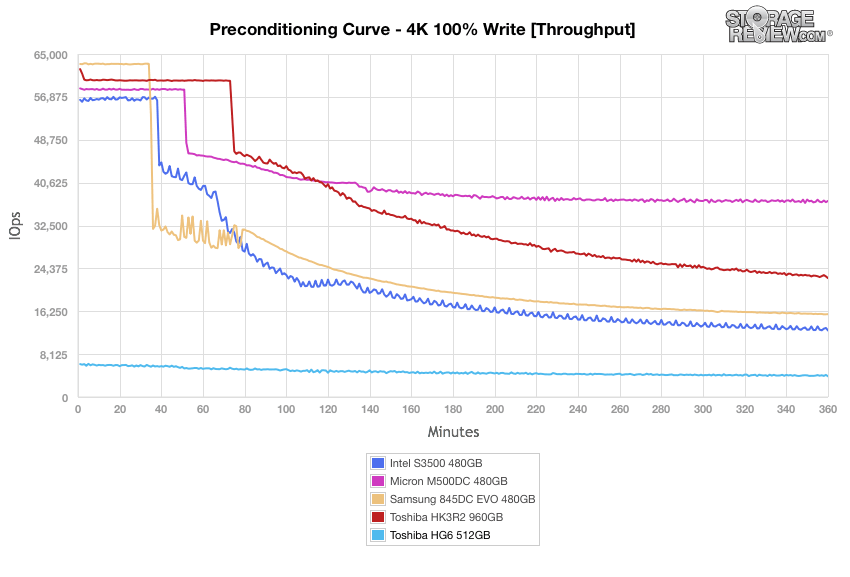 In our average latency tests, the HG6 once again showed results that were exponentially slower than the rest, going no lower than 40ms in latency throughout the test. 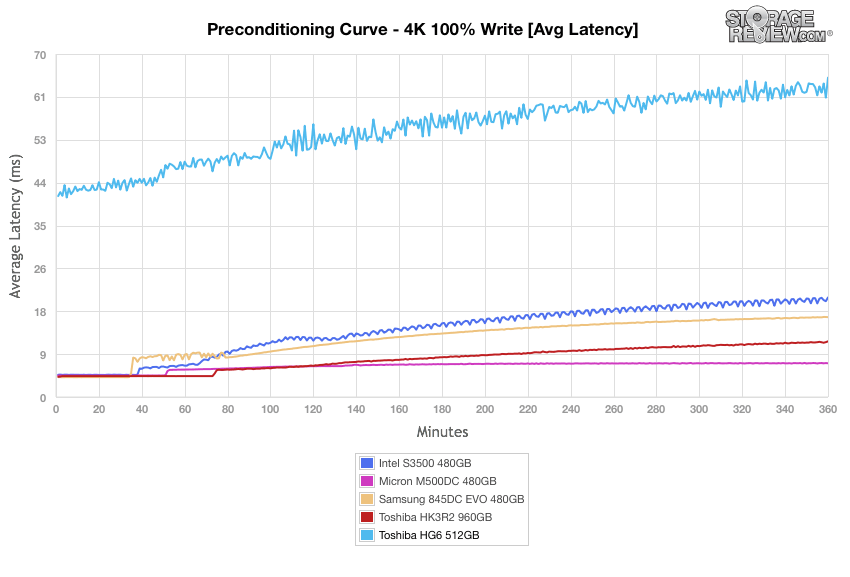 When looking at max latency, the HG6 showed spikes almost reaching 400ms, which was well above the average of its competition. 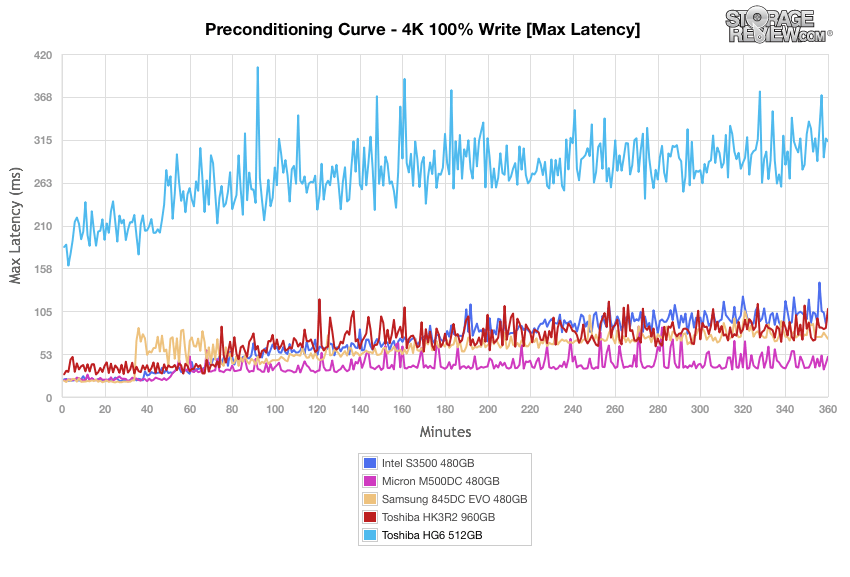 Our standard deviation benchmark 4k preconditioning test show results hovering around the 30ms mark, essentially tripling the latency of the next drive on the leaderboard. 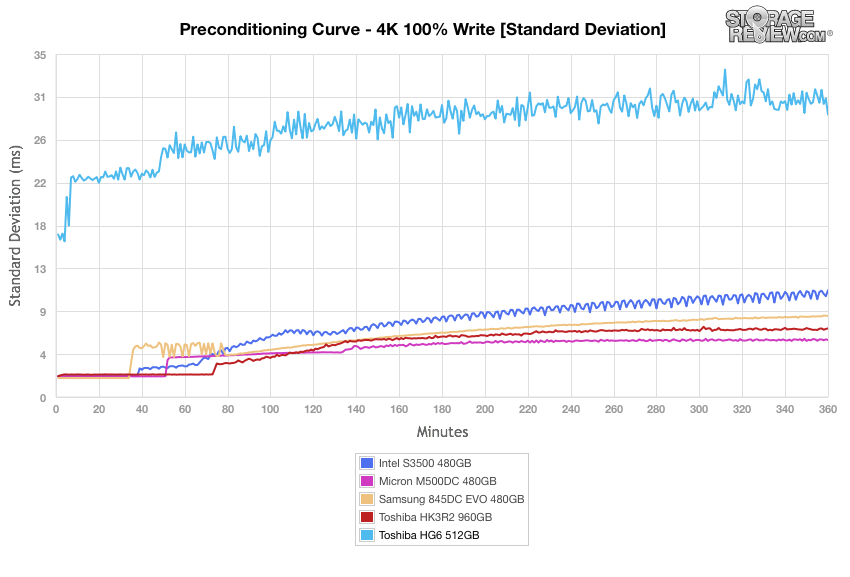 During the primary 4k synthetic benchmarks, the HG6 continued to lag behind.  When looking at throughput, the new Toshiba drive only hit 3,985 IOPS write, though it did show reasonable read activity with 63,452 IOPS.

Moving to average latency, the HG6 showed 4.032ms read and 64.22ms write. Both of these speeds ranked at the bottom of the pack, though its read activity was much closer to its comparables.

The maximum read latency recorded during the 4k benchmark from the Toshiba HG6 showed results below par (especially in the write column) with 383.0ms write and 24.671ms read.

Calculating the standard deviation of the 4k latency results continue to show the HG6’s extremely poor write performance with 30.53ms. Its read activity showed an improvement with 1.931ms.

Our next workload uses 8k transfers with a ratio of 70% read operations and 30% write operations. Though it still retained its last place position in all of the tests, the HG6 improved significantly. In our throughput benchmark, where it dipped a bit, it hovered around the 16,000 IOPS mark by the end. 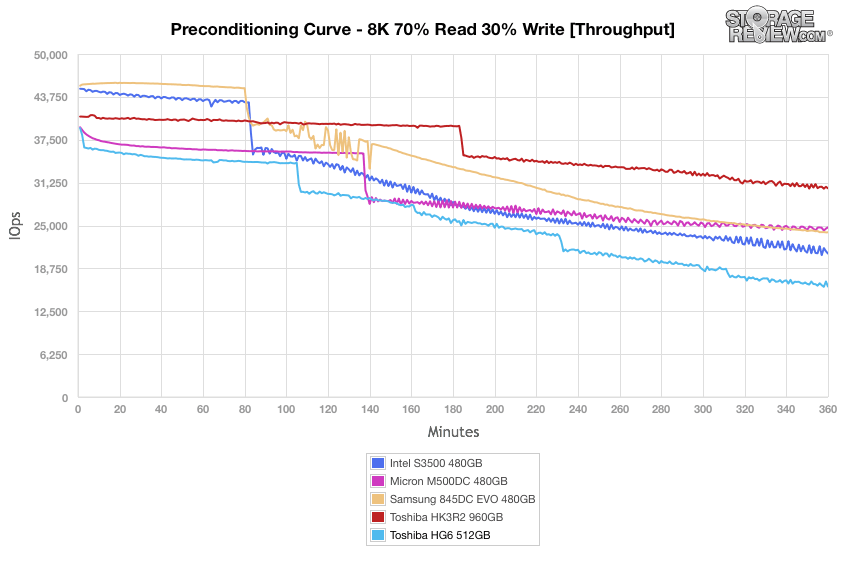 Average latency calculations for the 8k 70/30 preconditioning show the Toshiba HG6 in last place, gradually topping out at roughly 16.0ms. The top performer was its HK3R2 cousin, which had almost no spikes throughout the test. 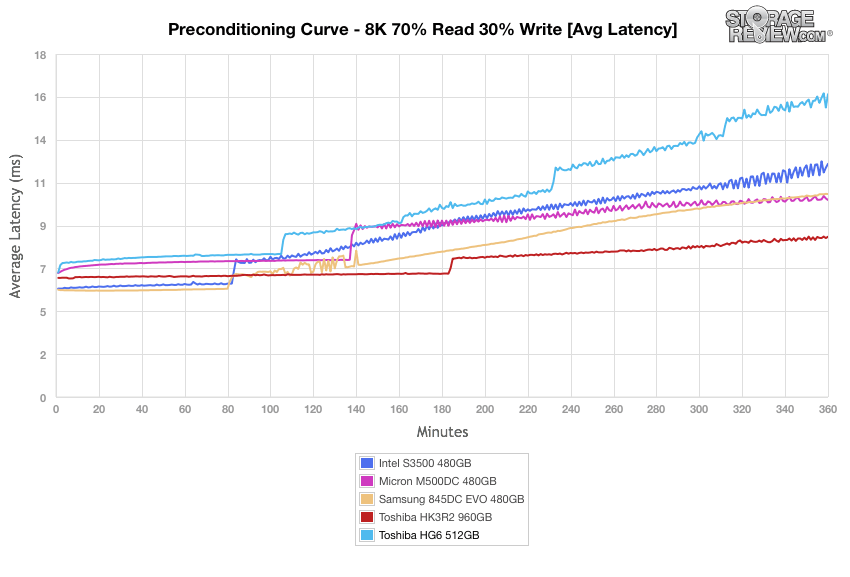 In our max latency preconditioning tests for 8k 30/30, the HG6 showed a huge spike at the beginning, though it settled down a bit after the initial burst and ended up with similar results to the Toshiba HK3R2. 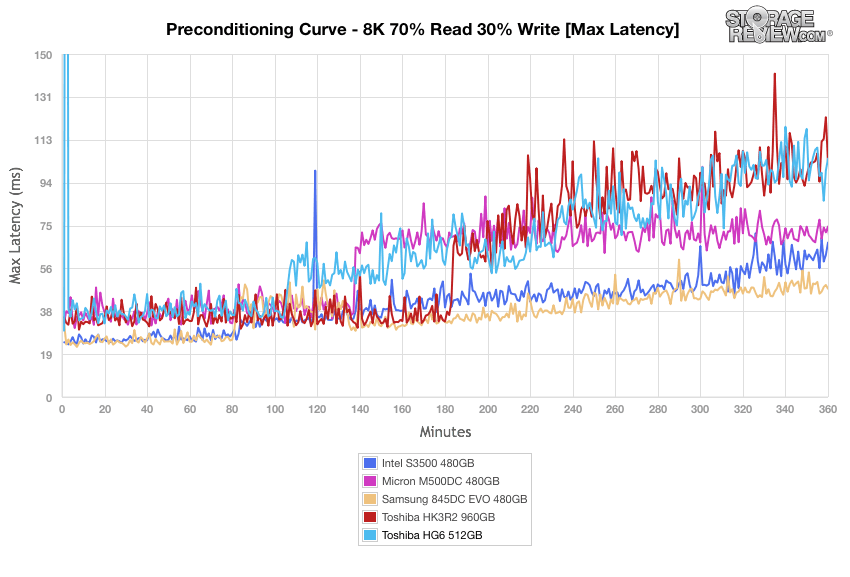 The standard deviation of our 8k latency results showed a bit of an improvement early on, though the Toshiba HG6 hit a latency of 9.14ms by the end of our benchmark. 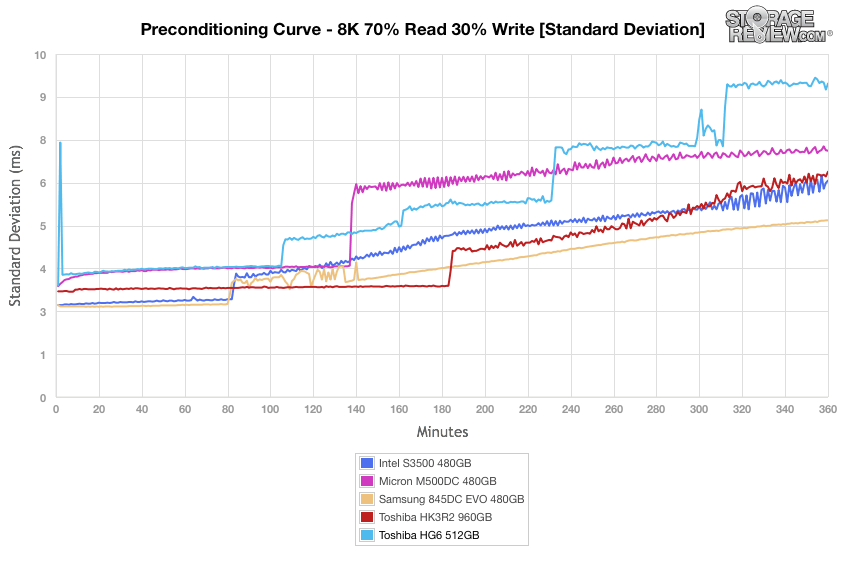 Once the drives are preconditioned, the 8k 70/30 throughput benchmark varies workload intensity from 2 threads and 2 queue up to 16 threads and 16 queue. In our throughput benchmark, the HG6 posted in IOPS of 15,879 by 16T/16Q, which was roughly 10K less than its top competition. The Samsung 845DC Evo continued its dominance with a peak IOPS of 35,000. Its brethren, the HK3R2 960GB, showed the best performance. 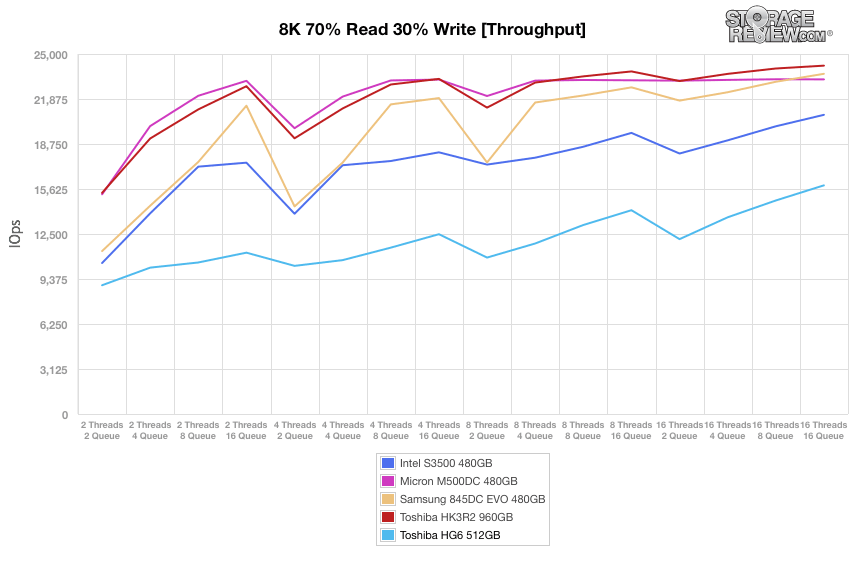 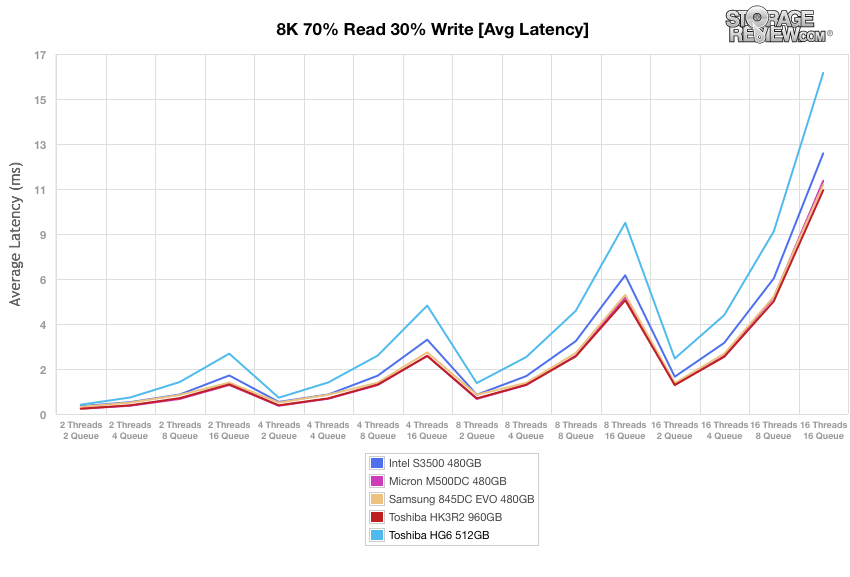 In our max latency test, the Toshiba HG6 actually posted numbers that beat the HK3R2, with a 16T/16Q result of 120.84ms (4th). The Samsung 845DC was the top performer here by a noticeable margin. 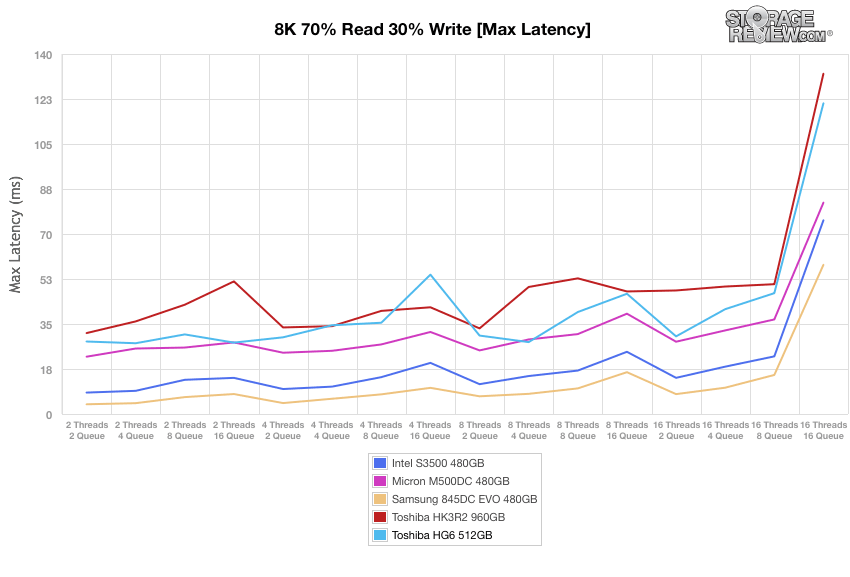 Our very last test looks at standard deviation. Here, the HG6 posted performance at the bottom of the pack again, with 9.07ms by 16T/16Q. The top performer was the Samsung 845DC. 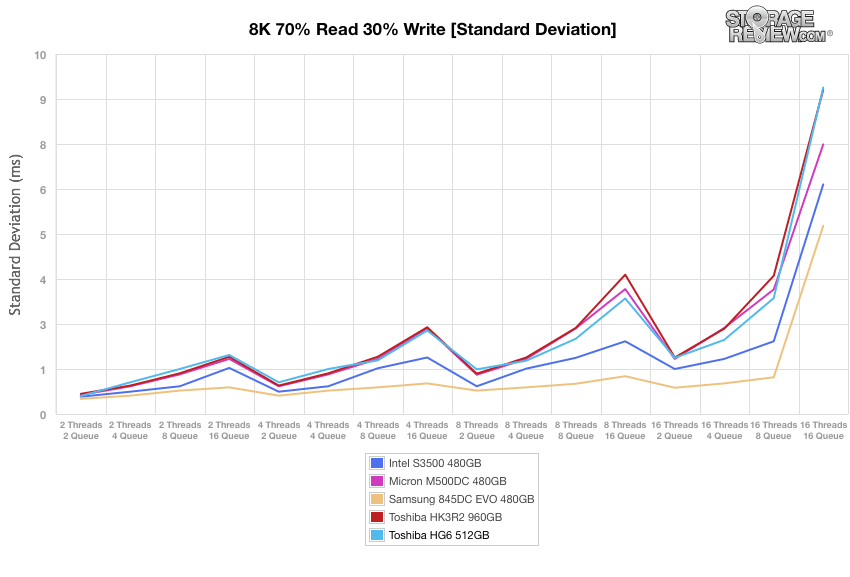 The Toshiba HG6 is entry-enterprise SSD with an emphasis on high reliability and power efficiency for read-centric workloads in OEM systems including Ultrabooks and servers. It is offered in five form factors to aid in deployment flexibility: 2.5" 7.0 mm, 2.5" 9.5 mm, mSATA, M.2 2280-D2 Double-Sided, and M.2 2280-S2 Single-Sided. This allows the HG6 to serve a number of different use-cases with the same core components. The HG6 is also equipped with the power-saving Devsleep feature, which puts the drives into a "device sleep" mode when needed. It also features End-to-End data path protection for additional error detection during the entire file transfer path (from the computer to the hard drive and back), and Toshiba’s proprietary QSBC error correction (Quadruple Swing-By Code), providing a powerful Error Correction Code that helps to protect against any read errors on the SSD.

It's important to note that the HG6 is targeted to be even lighter enterprise than the HK3R2. It can also ship as an enterprise client drive when flashed with the alternate client firmware. The net result is the HG6 itself is more of a client drive for the enterprise, that can be used in server scenarios where data integrity features and low cost outweigh performance.

On the performance note, the HG6 showed the weakest performance (by a significant margin) out of all the drives tested in all of our 4K preconditioning benchmarks. Results told a similar story when moving on to the primary 4k synthetic benchmarks, particularly with write activity. SQL Server results were also poor though MySQL results told a much better story for the drive. Ultimately the HG6 is marketed as an enterprise drive but really should be viewed from a client lens and only deployed in in servers or storage systems when the workload is extremely light and the need for low cost and robust data integrity outweigh performance.

The Toshiba HG6 is a flexible SSD that is designed for entry-enterprise workloads and enterprise client systems. The drive fails to stand out form the crowd though and is really best when low-cost paired with light-enterprise features are more important than performance.