written by StorageReview Enterprise Lab May 19, 2014

The PX03SN is Toshiba’s latest option for customers looking to take advantage of the rapidly evolving light enterprise SSD niche. The PX03SN a read-intensive enterprise SSD that leverages 19nm Toshiba MLC NAND for duties which require enterprise read performance such as host server storage and caching where write operations would total less than the PX03SN’s rated one full drive write per day. The PX03SN is available in capacities from 200GB to 1.6TB and uses a 7mm 2.5-inch form factor with a SAS 12Gb/s interface.

The PX03SN is Toshiba’s latest option for customers looking to take advantage of the rapidly evolving light enterprise SSD niche. The PX03SN a read-intensive enterprise SSD that leverages 19nm Toshiba MLC NAND for duties which require enterprise read performance such as host server storage and caching where write operations would total less than the PX03SN’s rated one full drive write per day. 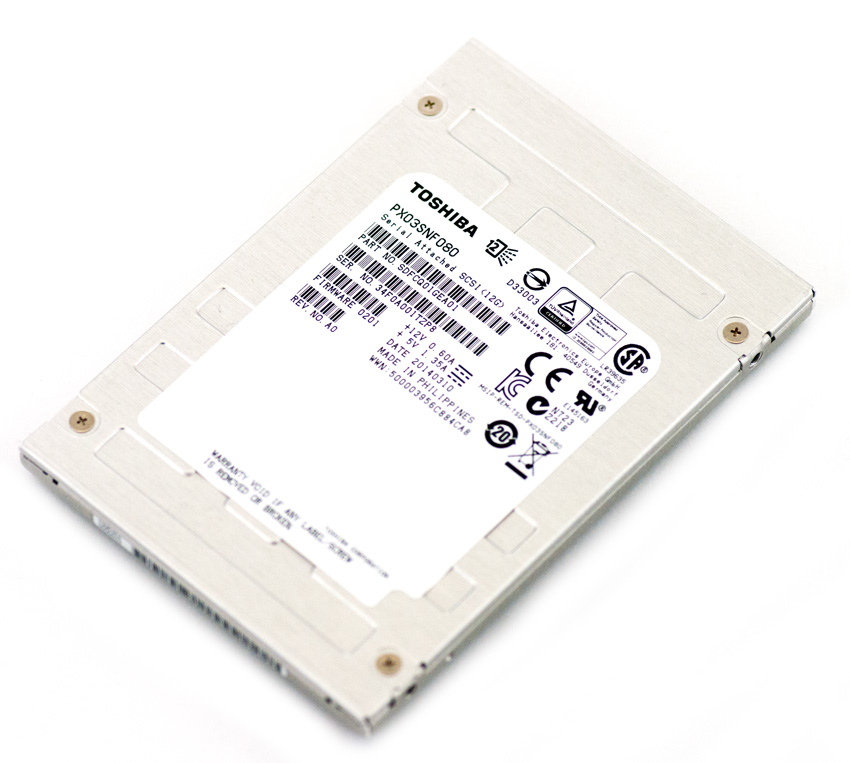 First announced in December 2013, the PX03SN is part of Toshiba’s PX-series which utilizes dual-port SAS3 interfaces and Toshiba’s Quadruple Swing by Code error correction. Like its PX-series siblings, the PX03SN is also available in security models with cryptographic erase technology. The PX03SN fits into a growing niche between higher-performance enterprise drives such as the Toshiba PX02SS and so-called prosumer or enthusiast SSDs which are also finding their way into off-label enterprise applications with lower endurance requirements and smaller budgets.

The PX03SN is available in capacities from 200GB to 1.6TB and uses a 7mm 2.5-inch form factor with a SAS 12Gb/s interface and five year warranty. Our review model is a single 800GB capacity drive.

Toshiba’s latest enterprise SSDs use a 7mm z-height rather than 15mm, which until recently has been the dominant enterprise SSD form factor. The PX03SN uses a 2.5-inch, 7mm stamped aluminum body for every capacity except for the 1.6TB model, which uses a 15mm chassis.

The PX03SN uses a dual-port 12Gb/s SAS3 interface which is backwards-compatible with 6Gb/s SAS2 backplanes. 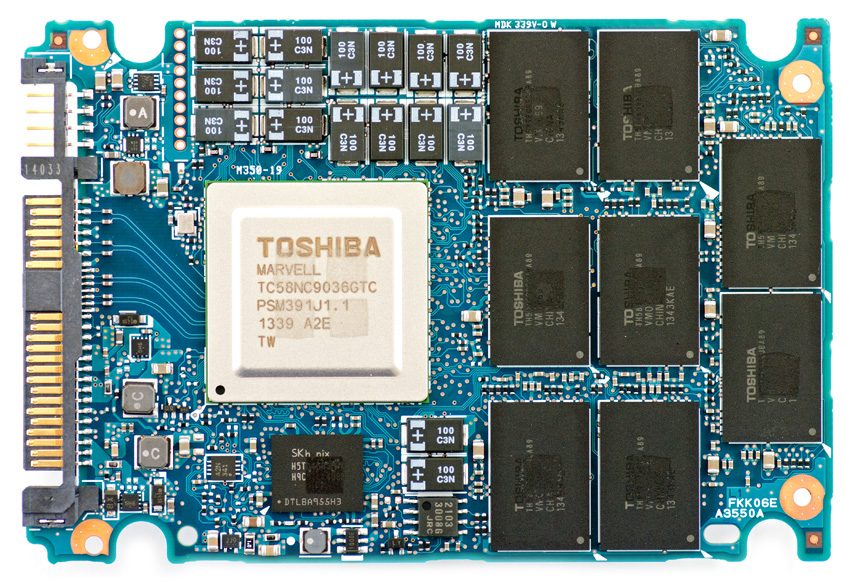 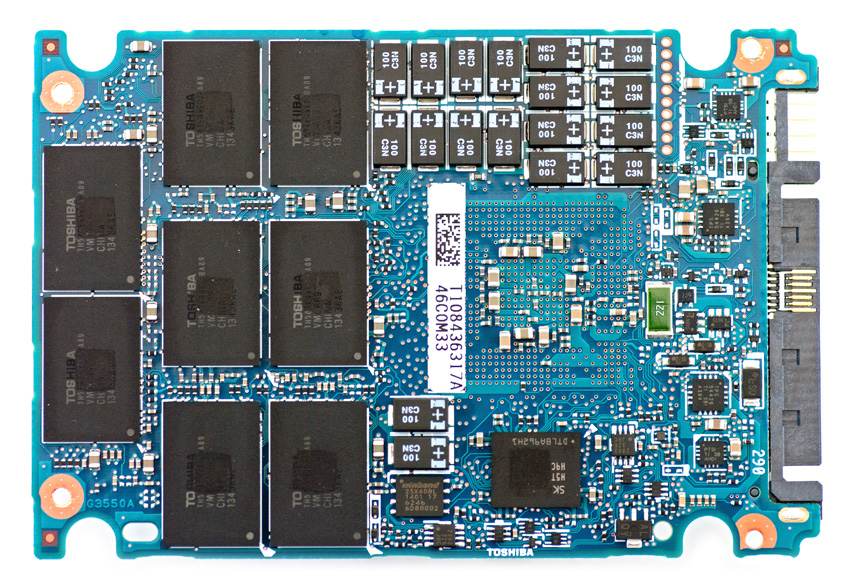 The StorageReview Enterprise Test Lab provides a flexible architecture for conducting benchmarks of enterprise storage devices in an environment comparable to what SAN administrators encounter in real deployments. The Enterprise Test Lab incorporates a variety of servers, networking, power conditioning, and other network infrastructure that allows our staff to establish real-world conditions to accurately gauge performance during our reviews.

In order to understand the performance characteristics of enterprise storage devices, it is essential to model the infrastructure and the application workloads found in live production environments. Because we only have access to a single PX03SN drive at this time, we have not been able to conduct our MarkLogic NoSQL Database Storage Benchmark which requires four SSDs. Application analysis for the PX03SN will therefore be limited to Percona MySQL OLTP performance via SysBench and Microsoft SQL Server OLTP performance with a simulated TCP-C workload.

The Percona MySQL database test via SysBench measures the performance of OLTP activity with a group of Lenovo ThinkServer RD630s as database clients and the database environment stored on a single drive. This test measures average TPS (Transactions Per Second), average latency, as well as average 99th percentile latency over a range of 2 to 32 threads. Percona and MariaDB are using the Fusion-io flash-aware application APIs in the most recent releases of their databases, although for the purposes of this comparison we test each device in their legacy block-storage modes.

The Toshiba PX03SN 800GB is one of the top three performers to date in the MySQL benchmark. Throughout the variations in thread count, the PX03SN maintained strong TPS performance that was comparable to the Toshiba PX03SS and the Hitachi SSD800M. 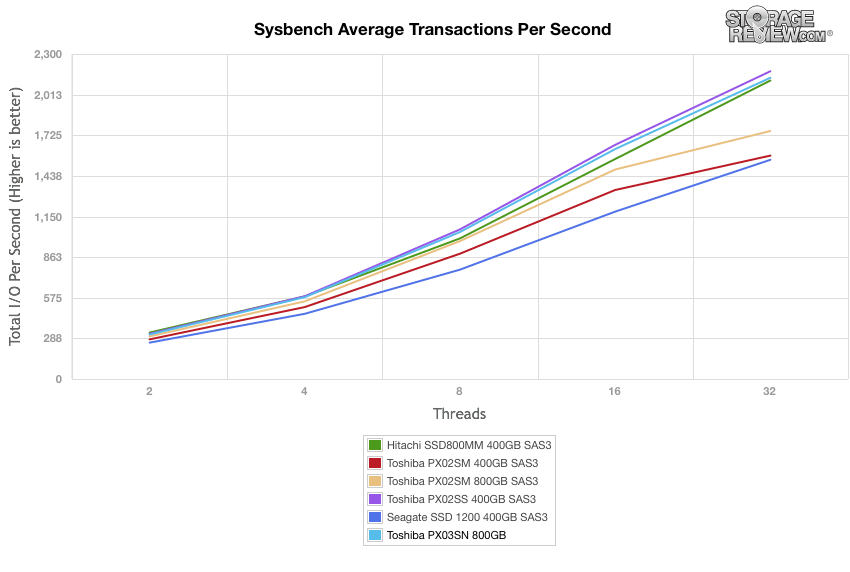 The Toshiba PX03SN maintained consistently low latencies throughout the MySQL protocol, with results that kept it among the top three comparables by this metric as well. At 32 threads, the highest average latency measured for the PX03SN was 15.01ms. 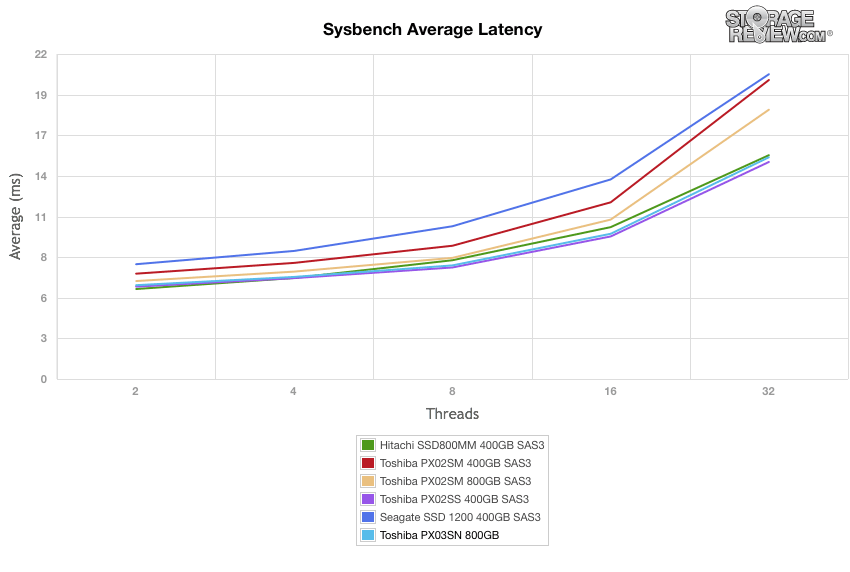 The Sysbench Average 99th Percentile plot highlights worst-case latency performance for our comparables. By this measure, the PX03SN did not maintain its top-three finish but performed near the middle of the pack to finish with lower latencies than either capacity PX03SM we have tested. 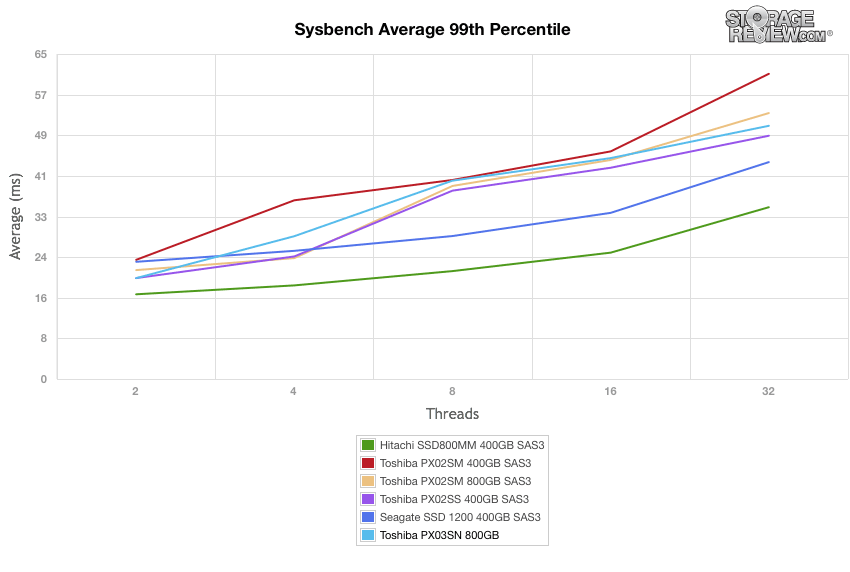 The Toshiba PX03SN trails slightly behind the PX02SM with 6,181.6TPS, placing the PX03SN third among our three 800GB comparables.

The difference between the Hitachi SSD800MM platform and the Toshiba PX series is more evident in terms of average latencies during the SQL Server benchmark. The PX03SN experiences the highest average latency of the three at 111ms.

Once preconditioning is complete, each device is then tested in intervals across multiple thread/queue depth profiles to show performance under light and heavy usage. Our synthetic workload analysis for the Toshiba PX02SN uses two profiles which are widely used in manufacturer specifications and benchmarks.

Within the first 90 minutes of 4k write preconditioning, the Toshiba PX03SN moves into second place behind the Hitachi SSD800MH. 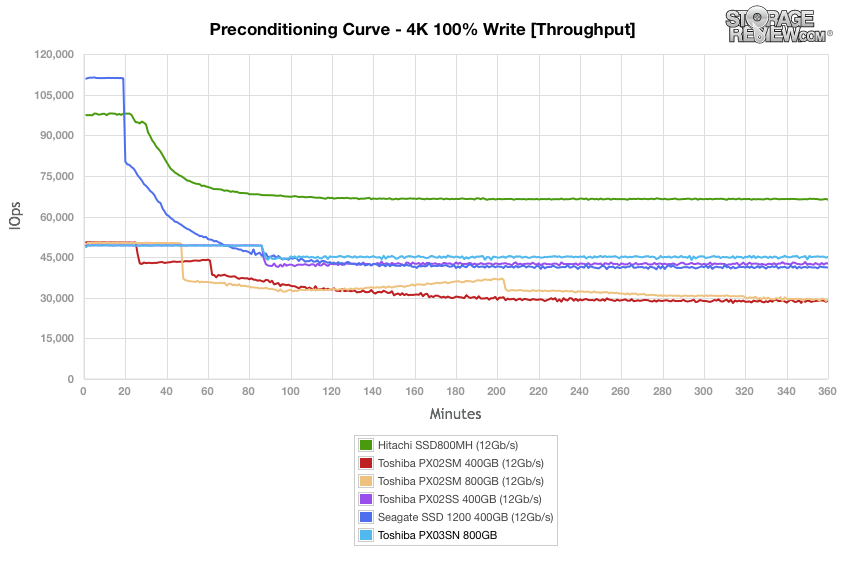 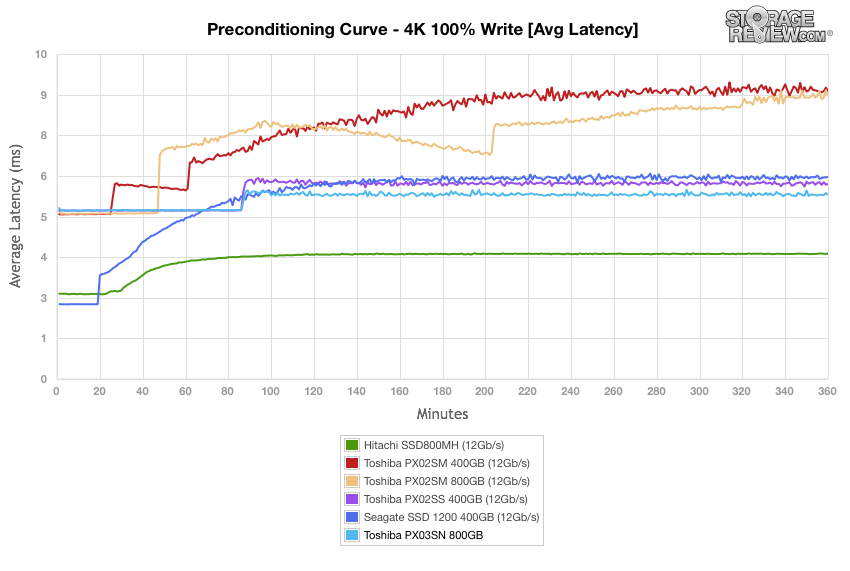 While the PX03SN does not keep its 4k write maximum latency results as tightly managed as many of the comparables, it does not suffer from any exceptional latency spikes and consistently improves on the maximum latency scores of the PX03SM starting with the third hour of preconditioning. 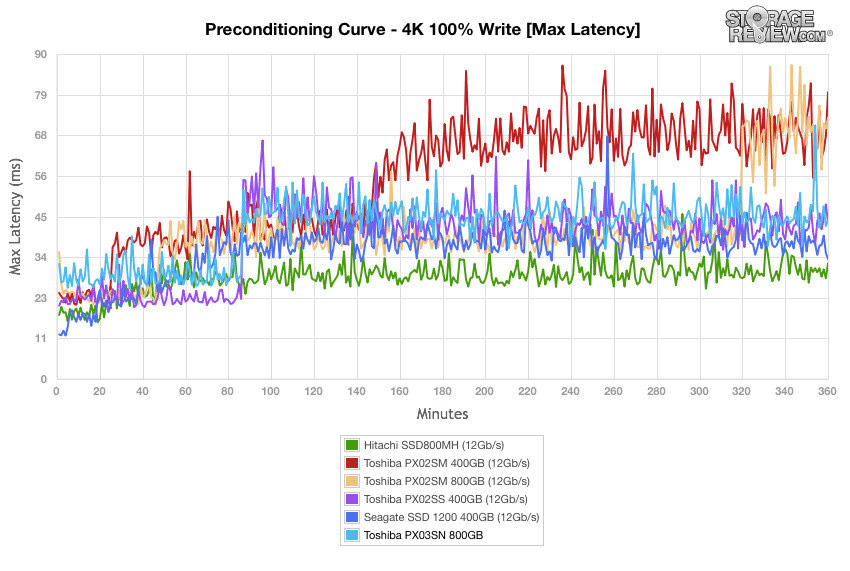 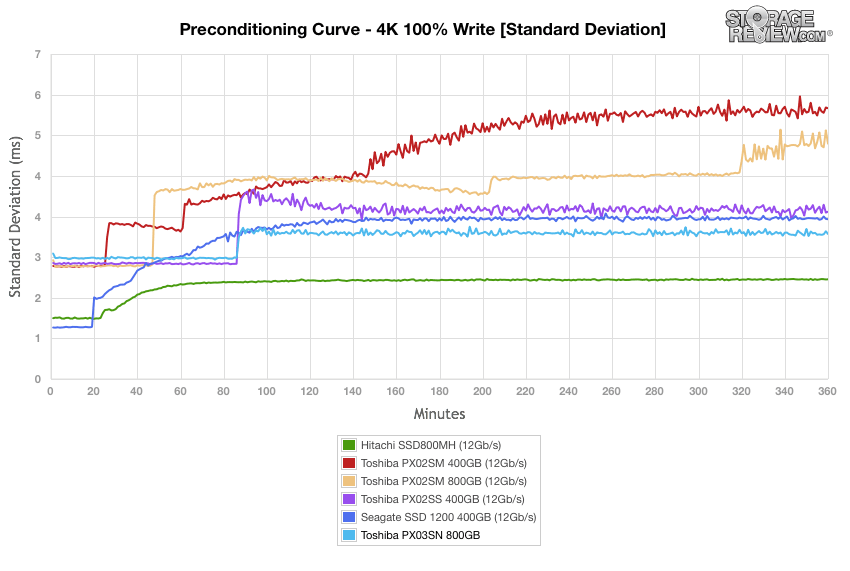 During the primary 4k synthetic benchmark, the Toshiba PX03SN is able to edge out its PX series siblings to achieve a second-place performance to Hitachi’s SSD800MH with 117,733IOPS for read operations and 45,507IOPS for write operations.

Average latency results for the 4k workloads continue to place the PX03SN second only to the SSD800MH.

The PX03SN is not able to match the tighter 4k read latency tolerances of the PX03SS or write latencies of the SSD800MH but again winds up in a clear second-best overall performance among comparable SAS3 SSDs we have benchmarked to date.

Our next workload uses 8k transfers with a ratio of 70% read operations and 30% write operations. After stronger burst performance that kept the PX03SN closer to the Hitachi SSD800MH and the Toshiba PX03SS, the PX03SN settled into steady state in a middle ground between those top-performers and the lower-performing PX03SM and Seagate 1200 comparables. 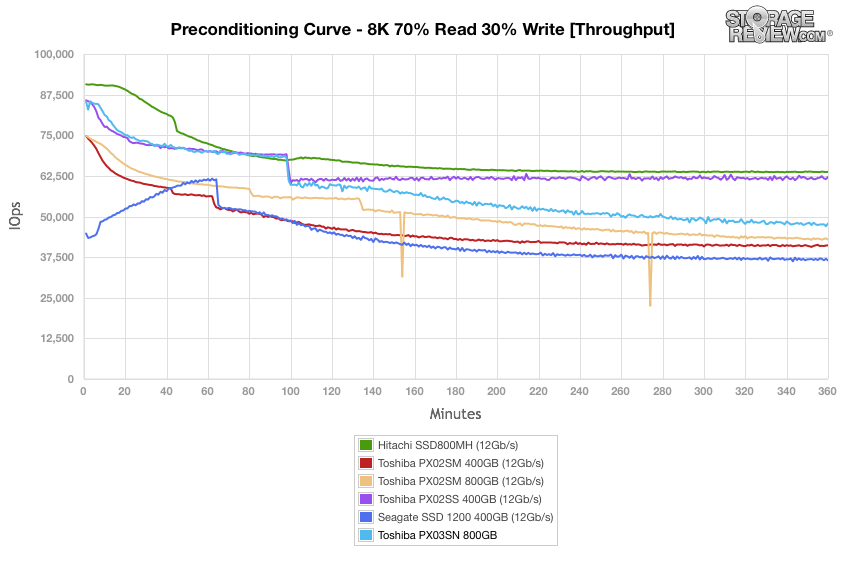 Our plot of average latency results during the 8k 70/30 preconditioning process are generally a mirror image of throughput performance during preconditioning. The Toshiba PX03SN bursts at approximately 3ms and settles into steady state near 5.4ms. 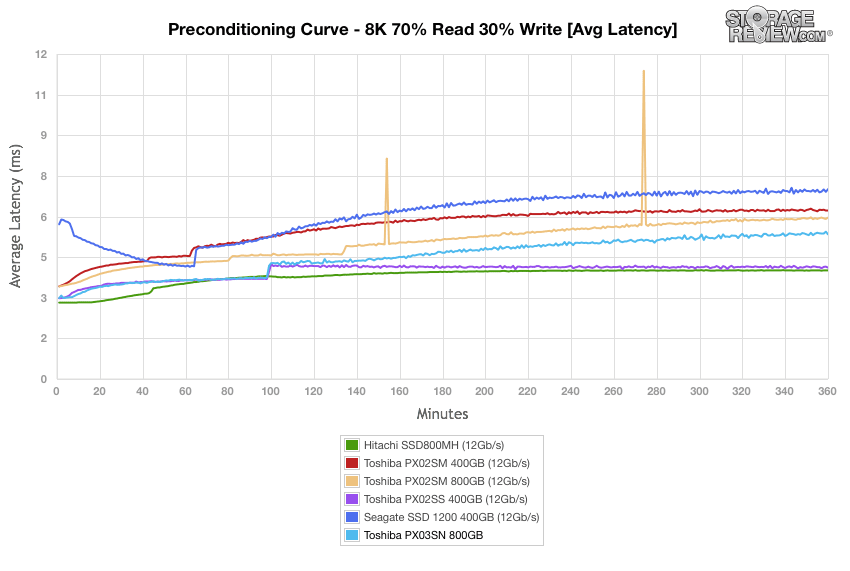 Maximum latency results for the Toshiba PX03SN during the 8k 70/30 preconditioning oscillate up to near 50ms, some of the higher values among our comparables, but the PX03SN does not experience any particularly notable latency spikes other than one anomaly near the beginning of the protocol with 1,534.33ms. 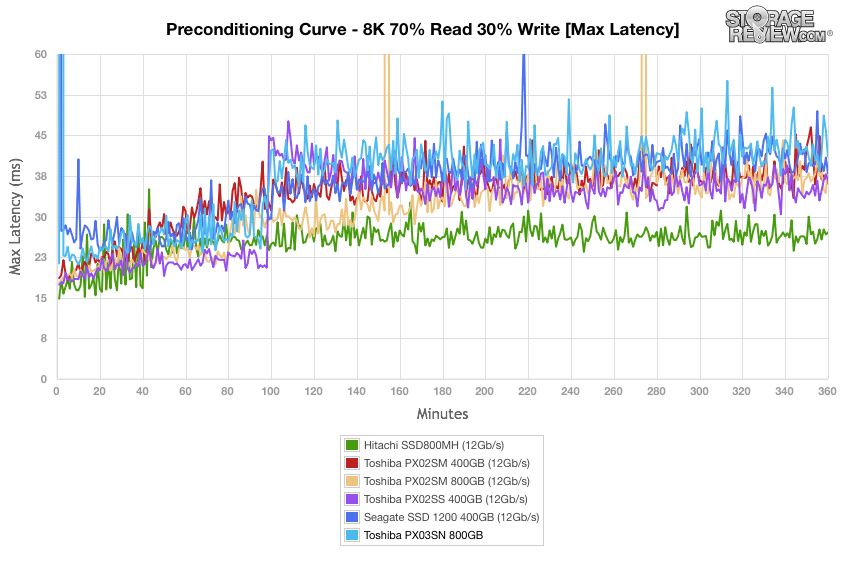 Standard deviation calculations for the 8k 70/30 preconditioning place that maximum latency anomaly in the context of an otherwise consistent and unremarkable latency profile during the approach to steady state. 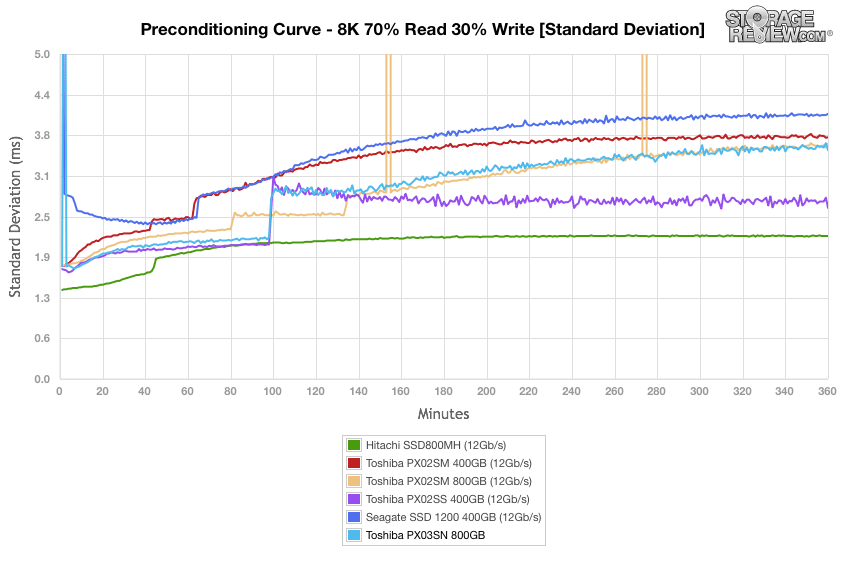 Once the drives are preconditioned, the 8k 70/30 throughput benchmark varies workload intensity from 2 threads and 2 queue up to 16 threads and queue of 16. The Toshiba PX03SN consistently outperforms the PX03SM and Seagate 1200 comparables across workloads, while remaining below the throughput performance of the PX02SS and the Hitachi SSD800HM. 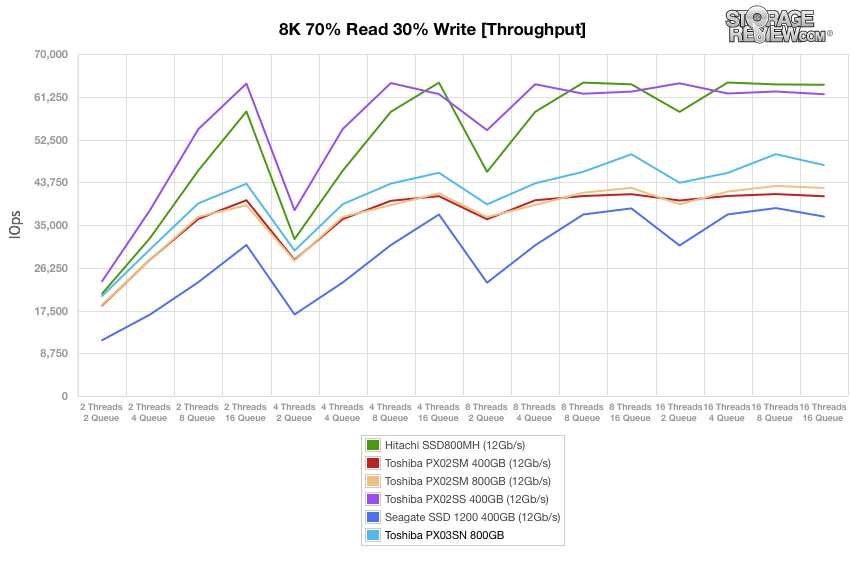 The Toshiba PX03SN also finds the middle ground in our measurements of average latency during the 8k 70/30 benchmark. 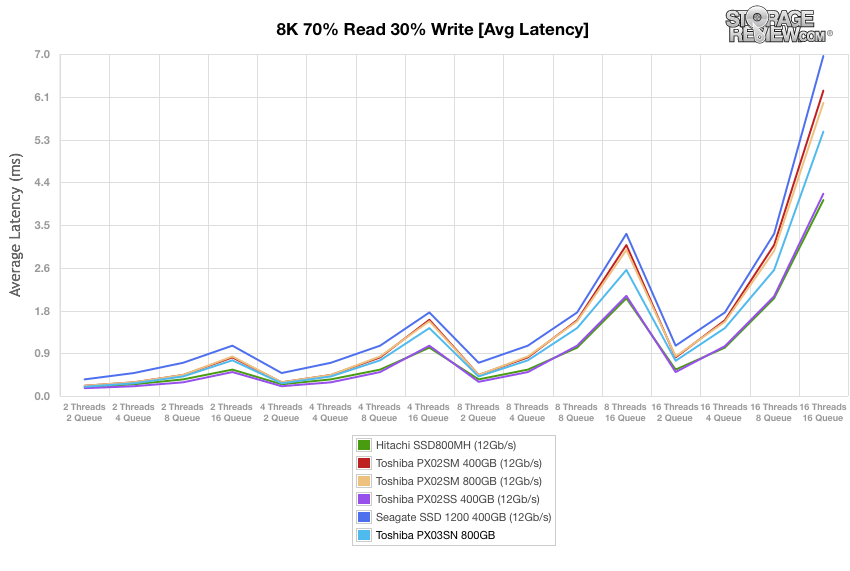 Maximum latency results during the 8k 70/30 benchmark prove to be the PX03SN’s weak area in this benchmark, as it vies with the Seagate 1200 for the highest latency values among our comparables. 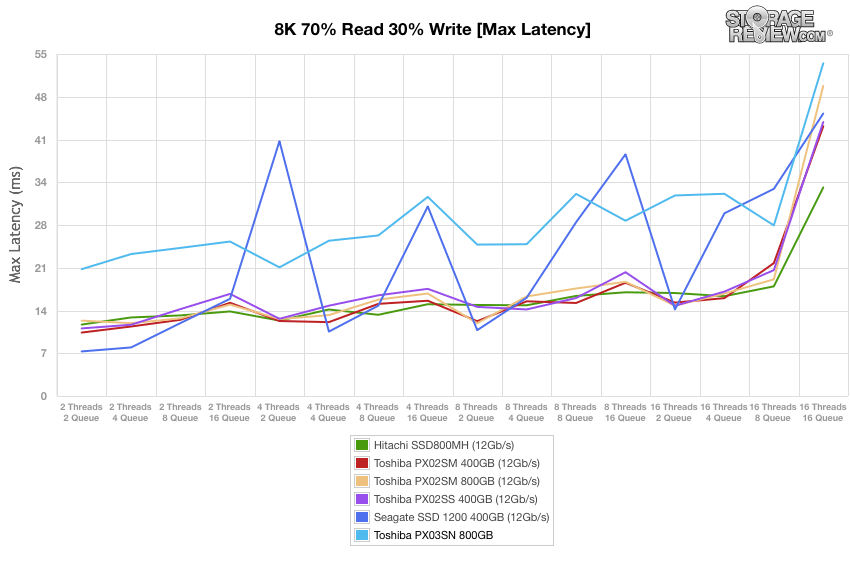 Measured in terms of standard deviation, the Toshiba PX03SN and the Seagate 1200 again vied for last place during our 8k 70/30 synthetic benchmark, although neither drive had notably poor results with any specific workload combination. 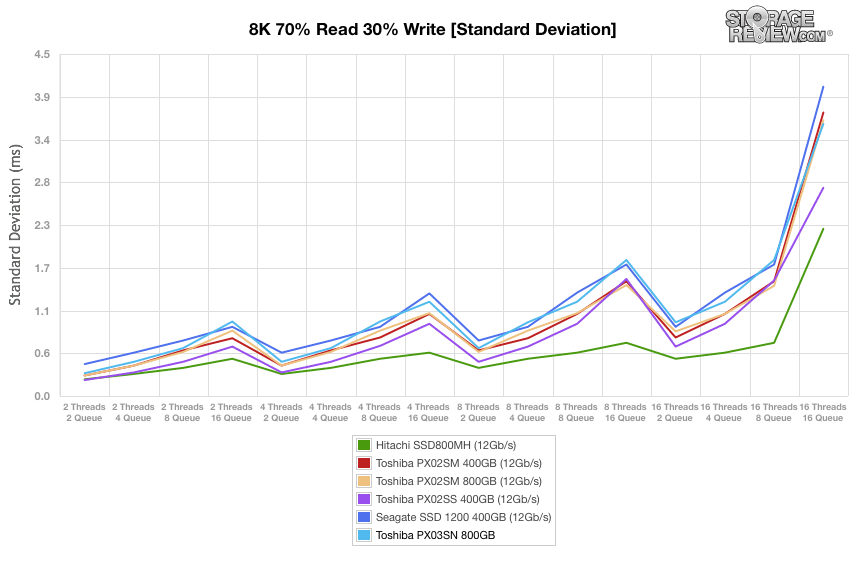 The PX03SN leverages Toshiba’s 19nm NAND and the company’s long standing relationship with Marvell to engineer a robust SSD that will be attractive to administrators who are moving to the SAS3 standard as well as those who are looking for a light enterprise SSD and want to avoid using a prosumer SSD off-label. Many enterprise buyers will find the PX03SN more suitable for light enterprise work thanks to its interface alone, where most other light enterprise drives use SATA.

While we do not have access to multiple drives in order to benchmark the PX03SN in our VMmark or NoSQL application tests, the PX03SN clocked very respectable results across the rest of our application and synthetic benchmarks. In our Sysbench MySQL test it came in towards the top of the pack, second to the PX02SS. In our SQL Server benchmark performance slipped behind the PX02SN. Turning to synthetic tests the PX03SN ranked upper middle of the pack in 4K random read and write performance, and middle of the pack in our 8k 70/30 workload.

If the PX03SN is priced competitively, it has a lot to offer enterprises that need high-performance SAS3 storage but don’t require the greater write endurance of a drive like the Toshiba PX02SS.

The Toshiba PX03SN offers an impressive balance of price and performance, fleshing out Toshiba’s PX series of enterprise SSDs as general purpose storage suitable for a variety of applications.