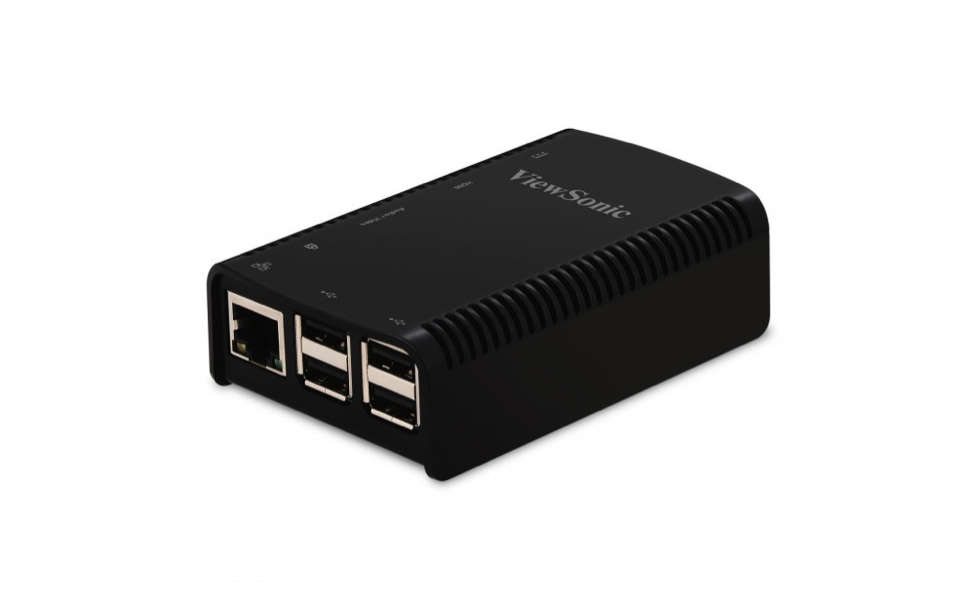 In this article, we will give an overview of the specifications, design and build of the SC-T25, and then we'll outline the testing that was carried out on the device and give an overview of the key findings from those tests. Lastly, we provide some final thoughts and briefly discuss who would benefit most from purchasing and using this device.

ViewSonic SC-T25 Specifications
Here is a general overview of the SC-T25’s specifications:

The SC-T25 does not contain any moving parts (not even a fan), which should make it extremely reliable. Removing the top of the device’s case (which will void the warranty) will reveal that the device has a Raspberry Pi 3 Model b V1.2 motherboard. The case, made from black plastic, has slots and holes in it for cooling, as well as ribs molded into it for rigidity. Although the case is lightweight, it is durable enough to withstand an office environment; as an extreme example, we can verify that an average-sized man can stand on the without having the case break or flex.

The top of the device has cooling slots molded into it and contains printed text to indicate the function of each port (e.g., Power, Ethernet HHDMI, etc.). 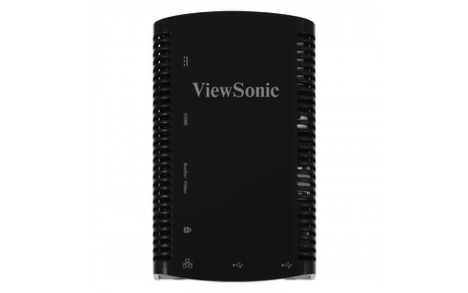 On the right side the device is the HDMI, 2.55mm audio jack, and micro USB ports (for power) as well as a Kingston lock slot. The front of the device has a RJ45 connector and four 2.0 USB ports.

On the back of the device, concealed under a cover, is a Micro SD slot that contains an 8GB SanDisk Micro SD card, which is used for persistent storage. The cover to reach the card is difficult to remove; the Micro SD card is not designed to be accessed frequently.

The bottom of the device is perforated with holes and has two slots that can be used to attach the device to the optional VESA mounting bracket (SC-BRACKET-001), which can be purchased from ViewSonic for $15 USD.

To test the SC-T25, we connected the device to a Dell 24” monitor with a resolution of 1920 x 1200 (U2412M) by using the HDMI connector, which had the maximum resolution of the client. The client was connected to a 1Gb network via the device’s 10/100MB RJ45. During the testing, the network was monitored to ensure that no other traffic was present on the network. Later on, we connected the SC-T25 to a 27” Lenovo ThinkVision P27 with a resolution of 4K by using the HDMI connector, and even though the device and monitor had different resolutions, a full screen display with a resolution of 1920 x 1200 was shown. The device allows screen shadowing via VNC; we used this feature to capture the figures in this review, but not while monitoring the responsiveness of the device in order to avoid adversely affecting its performance.

Within 15 seconds of plugging in the device (the device does not have a power button), the SC-T25 client booted up the NoTouch OS and presented us with a screen in which to configure our location and keyboard layout, and also to set the administrator’s password. 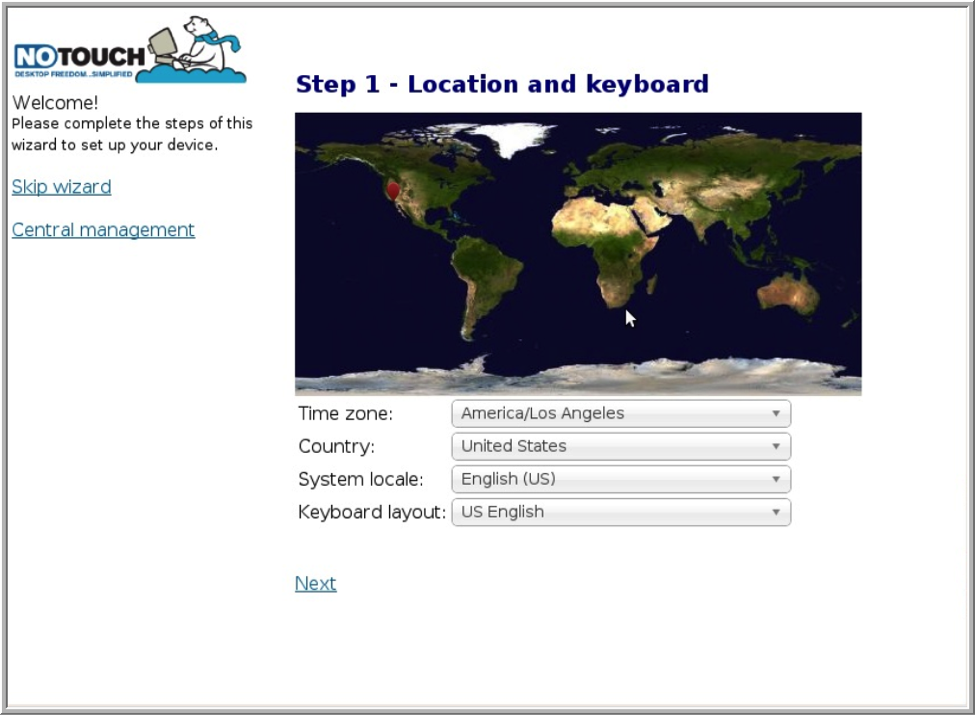 After a few more seconds, we received a message indicating that the configuration was complete, and were presented with a blue desktop with an icon to connect to a server; the bottom of the screen housed a taskbar which contained a Start button and displayed the time. When we clicked the Start button, it displayed a menu that had Shutdown, Reboot, Configuration and Sessions buttons. The Sessions button had the virtual desktop sessions we configured when the system initially booted up, and the Configuration button had the option to configure the system settings. 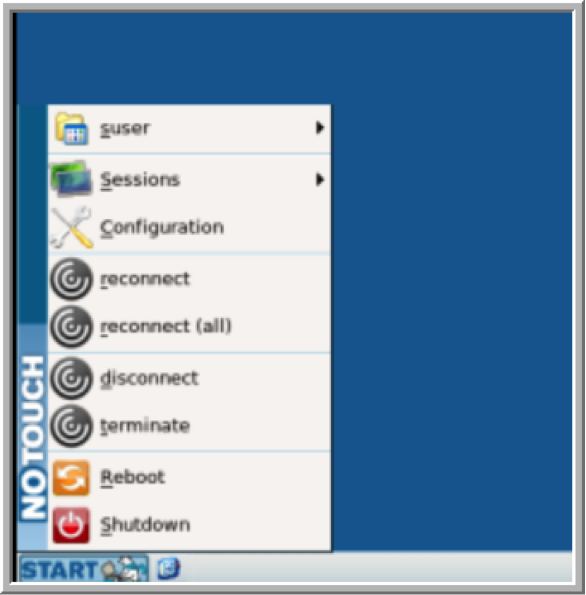 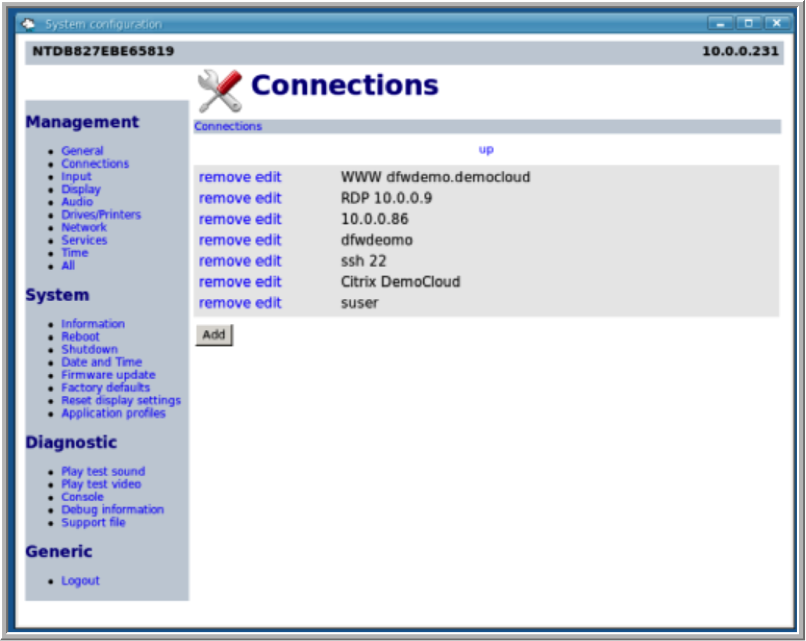 The real test of a virtual desktop client is its usability, and we tested the SC-T25 client’s usability over the span of two weeks with various configurations. During this time, we connected to various Citrix XenApps and XenDesktops using HDX, and we also used other remote display protocols to connect to other virtual desktops. Below are the results found during the time using the client.

Audio is not passed through the HDMI connection, and we could not get the USB to recognize a Jabra USB headset; we only got audio by plugging a headset directly into the 3.5mm jack.

We configured the client to use Citrix Receiver to connect to a Citrix StoreFront, which was populated with various applications and a virtual desktop. 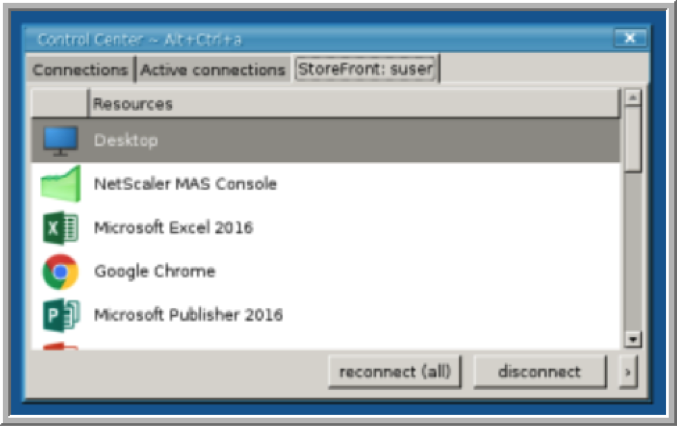 The Citrix Desktop that we connected to was running Windows Server 2106 with six E5-2690 Intel Xeon CPUs and with 29GB of RAM. The desktop was populated with Microsoft Office applications, and Chrome and Bing web browsers. 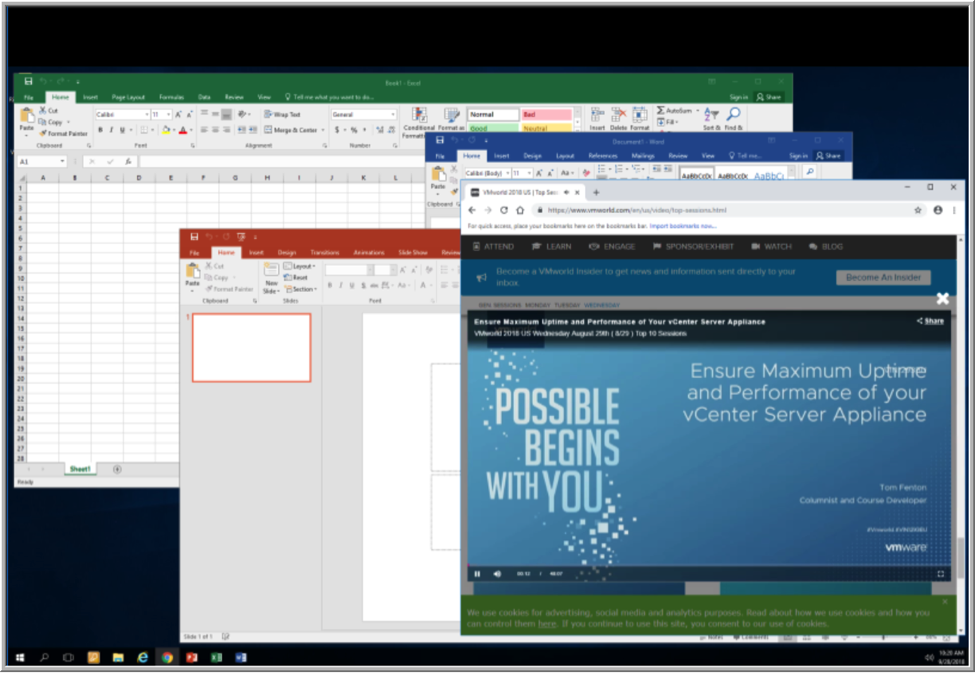 After signing off the virtual desktop, we brought up the applications being streamed, and found that all the Microsoft Office applications performed as well as if they were running on a local system. We then brought up Autodesk Showcase Viewer, SAP 3D visual editor, and Google Earth; these applications were usable, but the movement was far jerkier compared to other, higher-powered, VDI clients that were used with the same applications. We monitored the CPU utilization of the client with “top” and didn’t notice overutilization of the CPUs, so it could have been that the GPU or network was the issue. 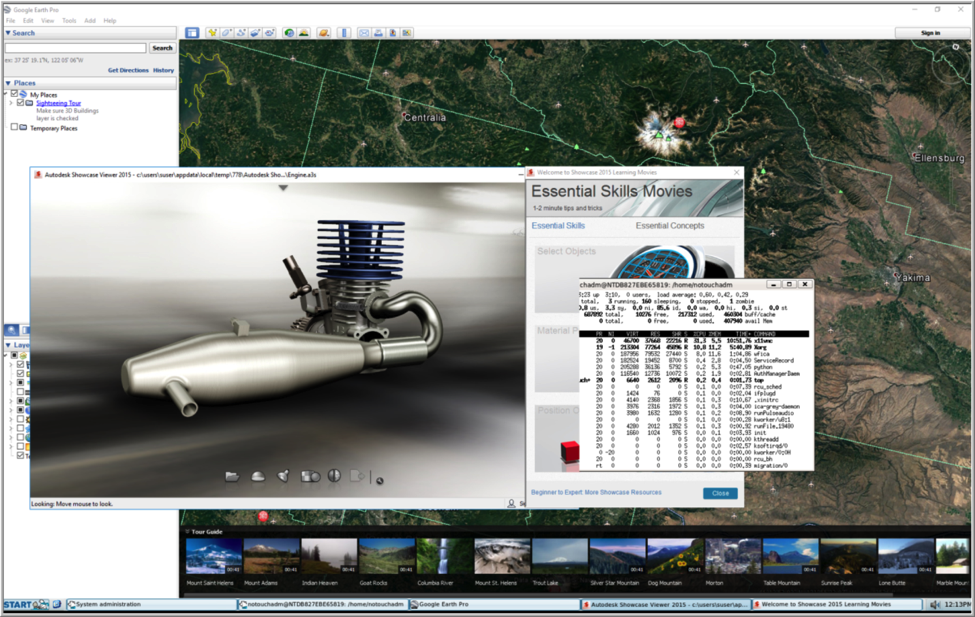 Although the SC-T25 documentation only lists the SC-T25 as being compatible with Citrix-supplied desktops and applications, we found that when setting up a connection, you have the option of using other protocols. Note, the information below is just from observations, and they were not taken into account in the final verdict of the device.

The device includes Firefox 45.0.2 browser that runs natively on the client. With the browser, we were able to connect to Microsoft Office applications delivered via Citrix XenApp, but there was a noticeable keyboard lag. On the other hand, when attempting to use a XenDesktop with the browser, we just received a black screen. We were able to go to other web sites by using the web browser.

When we tested the device using SSH and RDP, we could connect to various systems using the SSH, as well as a system running XP using RDP, without any issues. However, when we tried to connect to a Windows 10 system using RDP, we received an error and couldn’t connect to it. We didn’t investigate this error further, as using SC-T25 with RDP was beyond the intended scope for this review.

The Configuration button, located in the lower left-hand corner of the toolbar, had the option to configure the system settings. 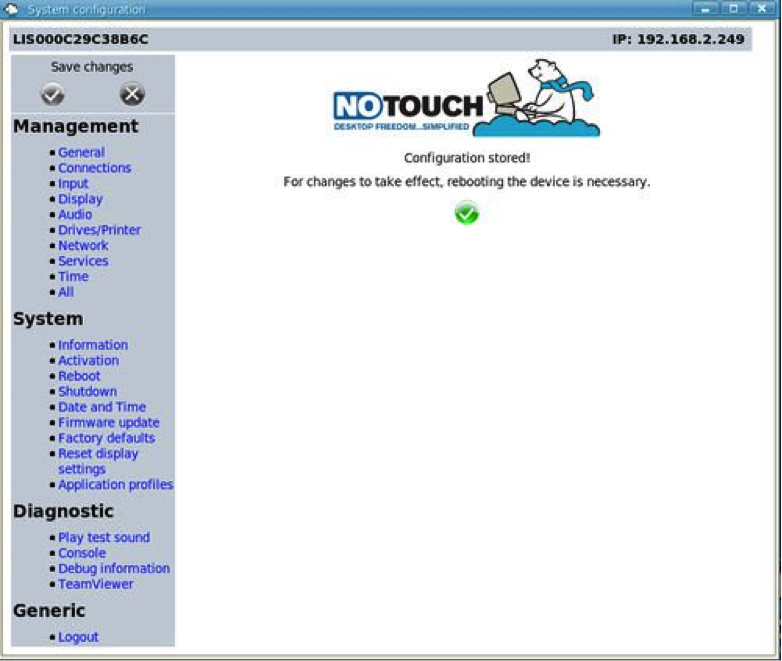 The configuration screen is broken down into four sections: Management, System, Diagnostic and Generic. Under the Management section, we worked with the Display, Audio, and Networking tasks. We found the menu intuitive and easy to navigate.

The device can also use NoTouch Center (NTC) for initial configuration and ongoing device management from a central portal. By default, when a device boots up, NoTouch OS will attempt to locate an NTC for its configuration. NTC is used for central device management, including images, licenses, updates, support, and reporting on runtime information of NoTouch OS devices.

NTC does not come with the SC-T25, but is available for free from Stratodesk; we did not use it while testing the device.

After using the ViewSonic SC-T25 thin client for two weeks with Citrix-delivered applications and virtual desktops, we found the device to be a fast-booting, ultra-small thin client that is easy to configure. While we found the SC-T25 to work adequately with standard Office applications, graphic applications and videos did not display smoothly. Also, its 10/100MB ethernet connectivity may be inadequate if multiple displays are attached to it via the optional secondary monitor adapter, or if a user is displaying a lot of video.

The SC-T25 seems well-built, and the Raspberry Pi 3 system upon which is the device is based has proven to be robust. From a practical standpoint, its lack of moving parts should make the device very reliable.

Due to its low cost and feature set, the SC-T25 would be a good fit for task workers in an environment that uses Citrix-delivered desktops and applications. However, it is worth noting that knowledge and power users will find its 4 USB 2.0 port, single 1920×1200 display and 10/100MB ethernet limiting. More broadly speaking, all users may find its lack of a power switch and a built-in VESA mounting base annoying.