The 4TB WD Black is Western Digital’s top-capacity and top-performing 7,200 RPM client system hard drive. The standard 3.5" form factor is designed to provide bulk storage for desktop use, while still offering top class performance. WD is using their standard five platter design for the 4TB Black (note: Caviar has been dropped from the branding) that is also highlighted by a 64MB cache, SATA 6Gb/s interface to deliver 154MB/s throughput.

The 4TB WD Black is Western Digital’s top-capacity and top-performing 7,200 RPM client system hard drive. The standard 3.5" form factor is designed to provide bulk storage for desktop use, while still offering top class performance. WD is using their standard five platter design for the 4TB Black (note: Caviar has been dropped from the branding) that is also highlighted by a 64MB cache, SATA 6Gb/s interface to deliver 154MB/s throughput. 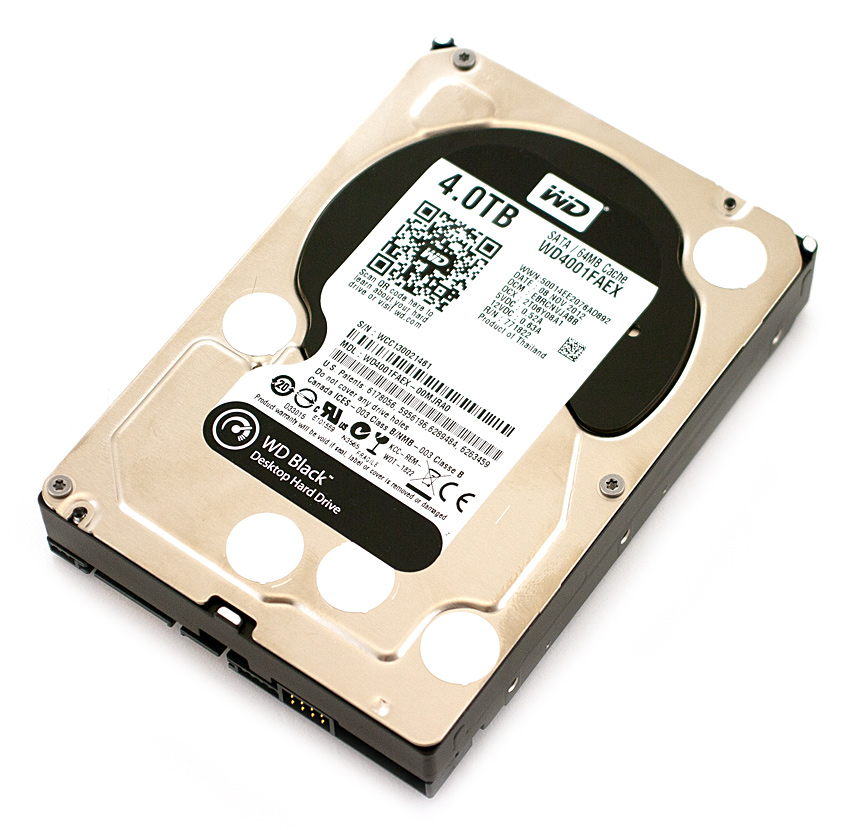 While SSDs are obviously faster – even the WD VelociRaptor boasts 205MB/s throughput – the Black line has always been about providing big capacities with best in class performance out of a 7,200 RPM spindle. With the latest 4TB Black, WD doubles the capacity available in the Black line, skipping the 3TB progressive step in their jump from 2TB to 4TB. It’s not just a capacity bump though, WD shows the 4TB drive offering a 12% boost in throughput, which is significant for the platter market.

WD continues to offer a five year warranty with the Black hard drives, which is the longest in the industry. The drives are shipping now with a street price of roughly $330 at the time of this review.

Western Digital follows a very common design practice with all of their consumer and enterprise hard drives. The consumer oriented WD Black 4TB has a WD-standard product label, with the only difference signifying each product series besides the model number is the black insignia at the bottom of the sticker. The WD Black 4TB is a standard 3.5" hard drive based on a SATA 6Gbps interface. We see the standard practice of Western Digital to place the heat-producing components in contact with the body of the drive. This allows things like the controller, RAM, and motor driver to dispense heat into the body acting as a large heat sink. Also, Western Digital makes use of a foam pad placed in between the drive and circuit board to help absorb vibration. Editorial Note: The 4TB Seagate is not yet released as a bare drive, the performance listed comes from a 4TB external desktop hard drive, from which we pulled the Barracuda. Seagate will release the bare drive early 2013.

In our first workload we look at the performance of each 4TB hard drive with a 100% random 4K write or 100% 4K read workload. In this test the WD Black 4TB came in middle of the pack, trailing on the Deskstar 7K4000 in both read and write activity.

Comparing max latency, the WD came in middle of the pack, with a peak write latency of 5,013ms and a peak read latency of 4,399ms.

Switching to our 8K 70/30 mixed workload, we measure performance from a low load of 2T/2Q (QD4 effective) up to 16T/16Q (QD256 effective). In this setting the WD Black 4TB came in above the 4TB Seagate Barracuda XT, but trailed behind the Hitachi Deskstar 7K4000 by a large amount. One of the bigger differences is the Deskstar saw a larger boost as queue depth increased per thread-count, where the 4TB Black and 4TB Barracuda plateaued. 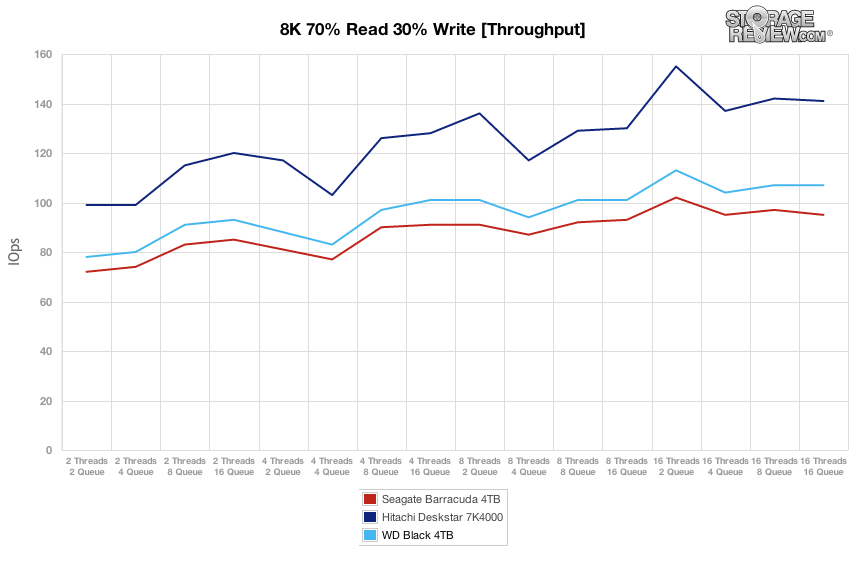 Comparing max latency between each 4TB hard drive, the WD Black 4TB had the highest peak response times over the duration of the test which got magnified as the queue depth increased. While the peak latency was higher from the WD Black 4TB in our 8K 70/30 workload, it still had slightly better latency consistency than the Seagate Barracuda 4TB, but still ranked below the Hitachi Deskstar 7K4000. Our next mixed workload measures the performance of each hard drive in our traditional File Server profile with a transfer size ranging from 512b to 64K. Over the most of the range in thread/queue loads the 4TB WD Black closely trailed the Seagate Barracuda XT, as well as the Hitachi Deskstar 7K4000. Performance from the WD Black scaled from 66 IOPS at 2T/2Q to 86 IOPS at 16T/16Q, versus the 7K4000 which scaled from 82 IOPS to 102 IOPS. 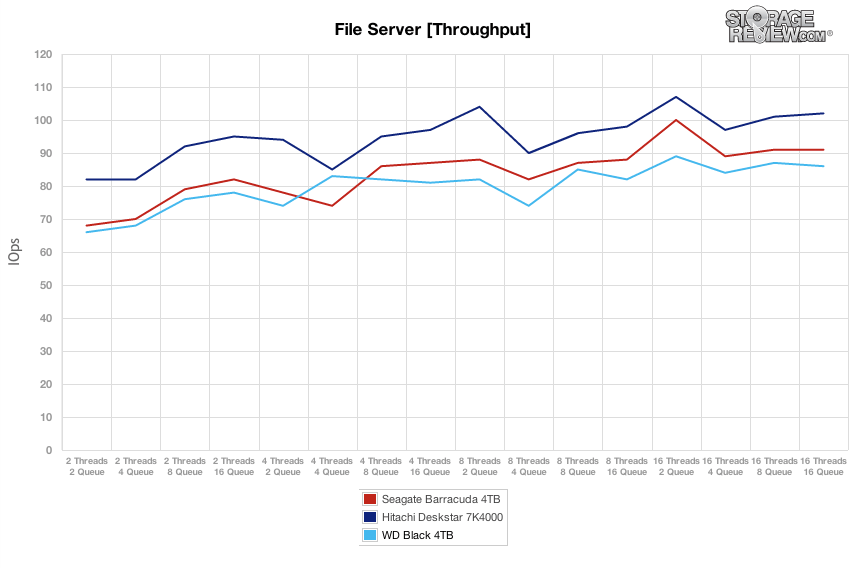 Across the spectrum of applied loads, the WD Black 4TB had the highest peak latency, which spiked highest with an 8-16 queue load in each thread count. This compared to the Hitachi or Seagate 4TB offering that kept it better managed in this particular workload. Switching our view to latency consistency in our File Server workload, the WD Black 4TB trailed the pack of consumer 4TB hard drives with the highest latency standard deviation from low to high load. Our last mixed workload measures performance in our Web Server profile, which includes transfer sizes of 512b to 512K in a completely read-only pattern. With this 100% read activity, the 4TB WD Black trailed the pack, with transfer speeds ranging from 57 IOPS at 2T/2Q to 63 IOPS at 16T/16Q, whereas the Hitachi Deskstar 7K4000 which led the pack scaled from 88 IOPS to 112 IOPS. 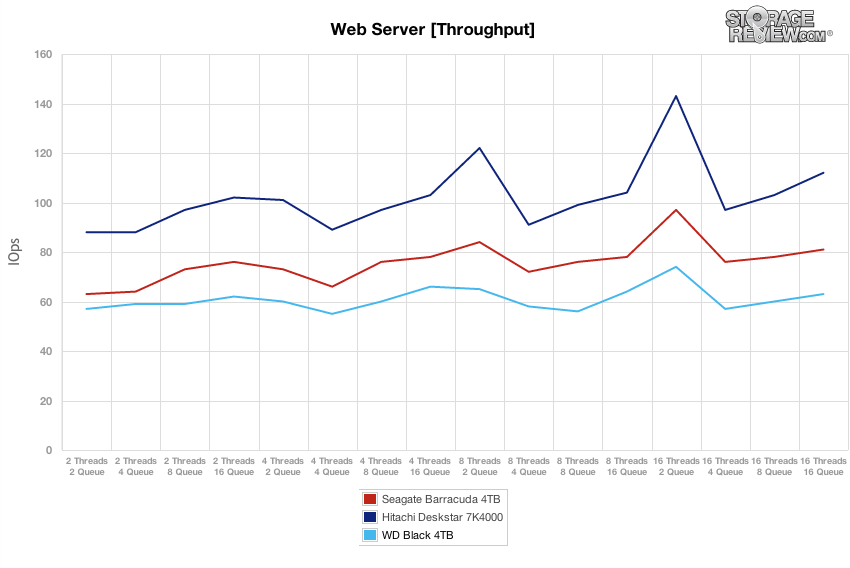 Looking at max latency in our Web Server profile, we saw a similar trend from the WD Black 4TB that we saw in our previous two mixed workloads. It repeated the same pattern of its high max response times, which peaked at 8-16 queue at each thread level. While the WD Black 4TB had the highest peak latency, its latency consistency ranked middle of the pack overall in our Web Server profile coming in in front of the Seagate Barracuda 4TB. 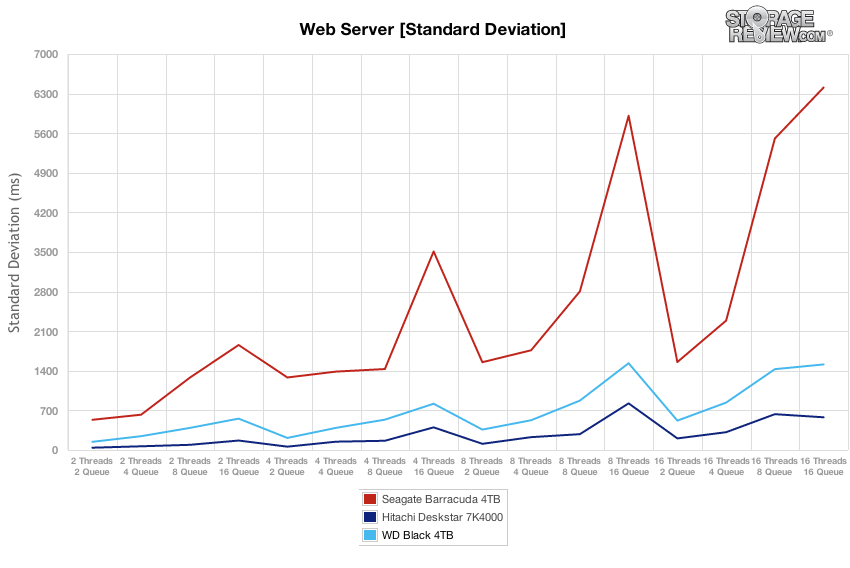 For those needing to bulk up on storage for all those media files or other digital packrat behavior, 4TB hard drives are a welcome option. While in the market for some time as external hard drives, the 7,200 RPM options are finally becoming more available. For its part, WD skipped the 3TB capacity entirely in their high-performance 3.5" 7,200 RPM consumer family, jumping from 2TB straight to 4TB in their Black line. WD has of course offered 3TB and 4TB enterprise hard drives, but while similar in build, the enterprise drives are very much more tuned for performance; in some cases the WD RE 4TB posts speeds twice as fast as the consumer alternative. Of course the enterprise drives come with a $150 price premium too, but it’s instructive to understand the differences between the consumer and enterprise targeting. It’s been common practice to see enterprise storage array vendors and the like sneaking consumer hard drives into enterprise gear. With drive tuning set the way it is in WD’s line, such behavior will probably decline as the cost savings vs performance hit won’t be worthwhile.

That’s not to say that the WD Black 4TB is a slug.  It does well in its intended market and is comparable in some areas with other drives in the high-performance consumer HDD category. In our 100% random 4K workload, it trailed the Hitachi Deskstar 7K4000, but came in on top of the Seagate Barracuda. The same could be said about our 8K 70/30 workload, where it offered a small boost in front of the Barracuda, although it trailed the Deskstar 7K4000 by a wider margin. In our File Server and Web Server workloads the 4TB Black trailed the competition in I/O and had trouble keeping peak latency in check as queue depth increased. Given the current price parity between the Hitachi Deskstar 7k4000 and the WD Black 4TB, it’s difficult to recommend the WD as it falls behind Hitachi almost everywhere. However, should a significant price gap materialize, consumers would be content with the WD as it’s hard to "feel" the performance difference in most use cases.