WD created the My Cloud EX line for prosumers who want network-attached storage (NAS) that can be accessed from many different types of computers, including tablets and phones. The newest addition, the EX4100, can hold up to 24TB in four drive bays. It is powered by a Marvell ARMADA 388 1.6 GHz dual-core processor with 2GB of DDR3 RAM — the amount of RAM can't be increased. This is an improvement over the 1.3GHz Marvel processor and 1GB of RAM in the dual-bay My Cloud EX2100.

WD created the My Cloud EX line for prosumers who want network-attached storage (NAS) that can be accessed from many different types of computers, including tablets and phones. The newest addition, the EX4100, can hold up to 24TB in four drive bays. It is powered by a Marvell ARMADA 388 1.6 GHz dual-core processor with 2GB of DDR3 RAM — the amount of RAM can't be increased. This is an improvement over the 1.3GHz Marvel processor and 1GB of RAM in the dual-bay My Cloud EX2100. 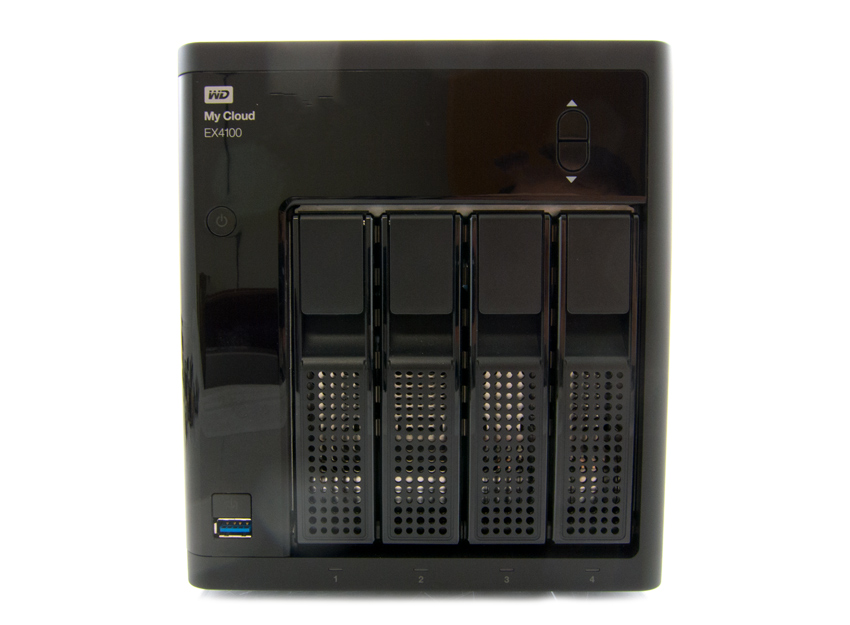 This NAS supports 3.5-inch WD Red drives that are available in 2TB, 3TB, 4TB, 5TB, and 6TB capacities. It is sold diskless, or with drives pre-installed in 8TB, 16TB, and 24TB capacities. The drive bays are hot swappable, with no tools required. The PC and Mac My Cloud applications allow users to drag and drop files, manage their content, and share links to photos, videos or folders via email. The Android and iOS apps allow users to access their files from phones and tablets. In addition, the EX4100 can be used with WD TV Live, Xbox 360, PlayStation 3, Windows 8, connected TVs, Blu-ray players and digital picture frames. It supports UPnP AV Media server (Twonky), DLNA, and iTunes Server.

The EX4100 comes either prepopulated or diskless, comes with a 2-year limited warranty, and has a street price of $399 bare.

The My Cloud EX4100 has a basic black design that looks quite professional. The front is dominated by the four 3.5-inch drive bays which use a tray-less design. There's also a power button, a front-mounted USB 3.0 port, and a backlit LCD capable of showing 2 lines of 16 characters of status updates and alerts. 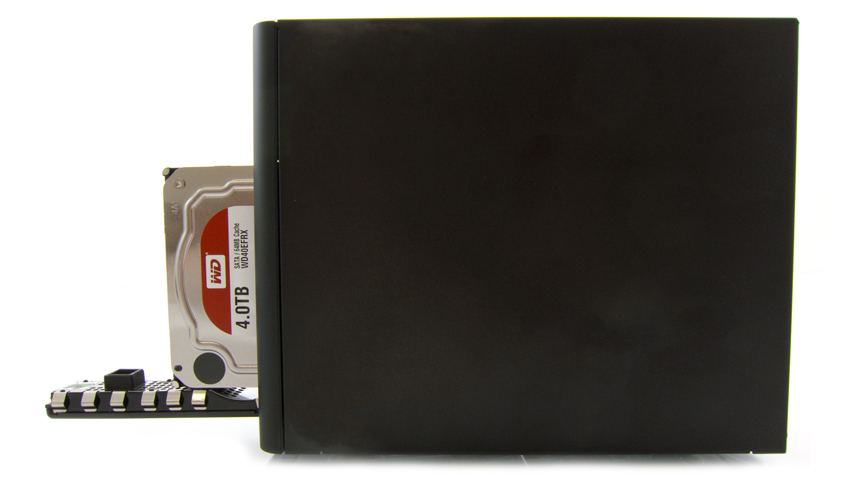 The side is just about as plain as it can be, without the large branding many companies put on their NAS. 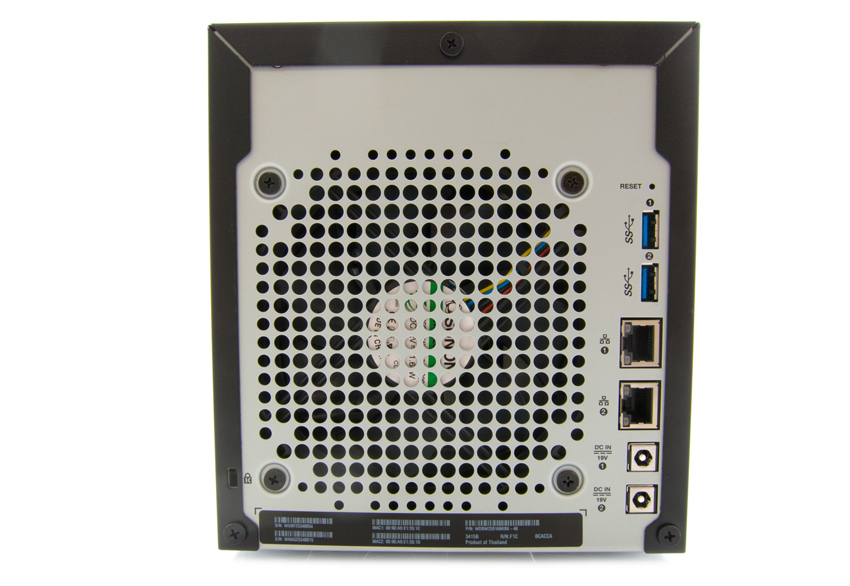 Much of the back is taken up by a 120mm fan, but there's also room for a dual USB 3.0 ports and two Gigabit Ethernet ports with support for Link Aggregation. Two power ports allow for a backup power supply.

The WD EX4100 uses the My Cloud OS 3 we previously reviewed. Once the NAS is connected to the same network the user’s computer to connected to they can easily access the device through a web browser. The home screen gives user a quick overview of the system including capacity available total and the amount currently used. To the right is the specific device and its system health as well as whether or not it needs a firmware update. Along the bottom of the screen is the network activity (in both CPU and RAM), as well as the various cloud devices connected to the NAS, the amount of users, and the total amount of apps installed. The Settings tab enables users to easily configure their device. And users can easily add Apps both from WD and from third parties. We tested both SMB and iSCSI performance using RAID 5 and RAID 10 configurations of the WD Red NASware 3.0 4TB drive that ships with the WD My Cloud EX4100 (unless you buy the diskless version).

We tested the EX4100 while comparing it to the following other NAS device:

Each device is tested in intervals across multiple thread/queue depth profiles to show performance under light and heavy usage. Our synthetic workload analysis for the My Cloud EX4100 uses three profiles, which are widely used in manufacturer specifications and benchmarks. It is important to take into consideration that synthetic workloads will never 100% represent the activity seen in production workloads, and in some ways inaccurately portray a drive in scenarios that wouldn't occur in the real world.

WD's My Cloud EX4100 did very well in the throughput test, generally outperforming the DL4100 across the range of conditions. The RAID10 iSCSI configuration did especially well, and even its slowest configuration (RAID5 iSCSI) often did better than the best its rival had to offer. 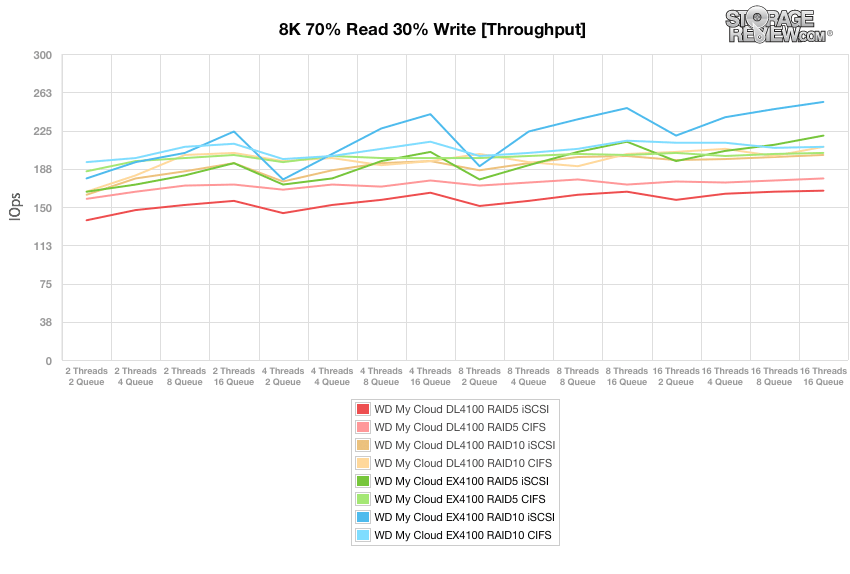 The same was true in our 8K Average Latency tests, with the EX4100 consistently showing lower latency than the DL4100. This was especially for the RAID10 iSCSI configuration. 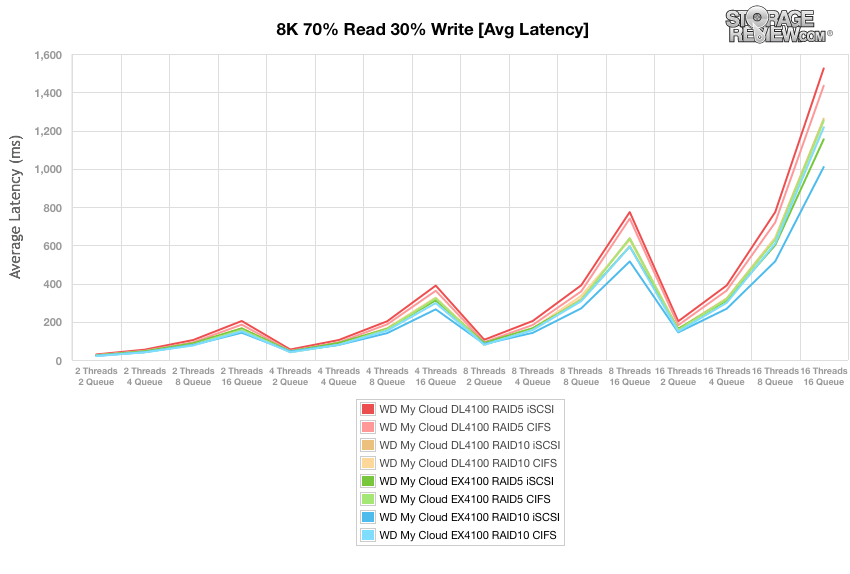 The EX4100 had higher latency spikes when using RAID5, as both the iSCSI and CIFS configurations showed high maximum latency, over 6000ms in some situations. Max latency was much lower when using RAID10, with RAID10 CIFS doing the best. 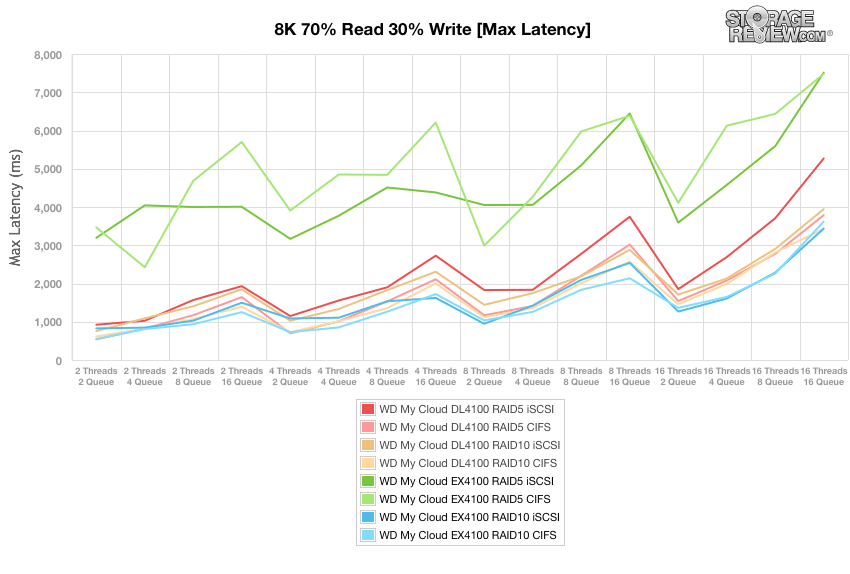 The situation was a bit better in our standard deviation results. The EX4100 configured with RAID5 still experienced the highest deviation in the test, but it was more in-line. Again, this NAS with RAID10 with either the iSCSI or CIFS  showed the lowest deviation, solidly besting the DL4100 in most situations. We also performed sequential large-block transfer tests with 128k transfers, and the DL4100's score of 231,478 KB/s when reading configured with RAID10 CIFS was the highest in the test, though there was remarkable consistency across all the configurations of both this device and the DL4100. The EX4100's best write performance was 199,469KB/s when configured with RAID5 CIFS, putting it near the top of the pack.

The WD My Cloud EX4100 is intended for multimedia enthusiasts who want to store up to 24 terabytes of files and then stream to a range of devices, including tablets and phones. Files can be uploaded over a network or through any of three USB 3.0 ports, and the EX4100 can be connected to a backup power supply.

In our tests, this NAS did well when writing data with 4K benchmarks at 564 IOPS, though it struggled a bit in the 4K latency tests. Looking at 8k sequential performance the EX4100 gave us performance of 18,318 IOPS read and 11,459 IOPS write, although trailing behind the DL4100. In our 8K 70/30 tests the EX4100 showed an overall stronger performance. When configured with RAID10, the EX4100 regularly outperformed the DL4100, and it showed lower latency while doing so (in iSCSI RAID10 the EX4100 peaked with a throughput of 253 IOPS). In our large block 128K tests the EX4100 gave us bandwidth of 231MB/s read and 199MB/s write.

The WD EX4100 is targeted at creative professionals and multimedia enthusiasts that have the need for high capacity and flexibility of access with an easy to use interface.