Performance-wise, WD quotes speeds up to 233MB/s with its Thunderbolt technology (superior to both FireWire 800 and USB 3.0), which is plenty of oomph for those looking to edit on the fly as well as allowing for speedy backups capabilities. Another key feature of WD’s new dual-drive is its user-selectable RAID function, which helps deliver the needed performance for the most demanding applications in the field. This RAID functionality gives users the ability to choose between data striping (RAID0) for high performance or mirroring (RAID1) for data redundancy, all according to users’ specific needs. Users can also choose a JBOD configuration of the dual drives. 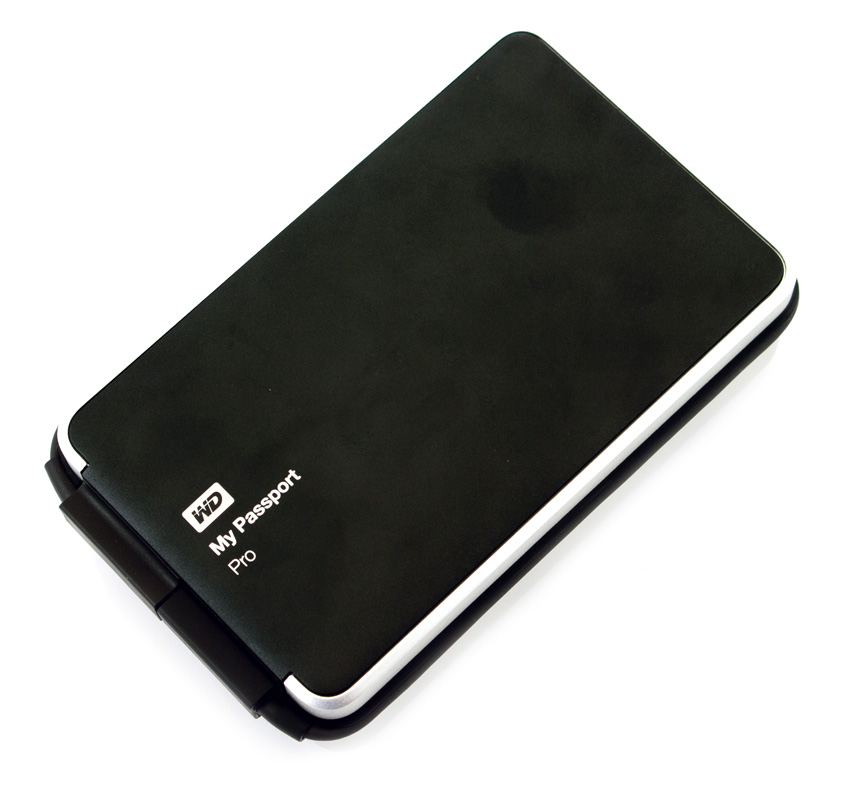 The WD My Passport Pro houses two 2.5-inch hard drives inside an aluminum enclosure and is thoroughly shock-tested for extra durability, a welcomed feature for those constantly working on the go. To make it even more mobile, the My Passport Pro is directly powered through the integrated Thunderbolt cable, a unique feature to WD, removing the need for any additional cables.

The My Passport Pro is available in 2TB and 4TB capacities priced at $299.99 and $429.99 USD respectively. All drives are inclusive of a 3-year warranty.

WD took an interesting route for the look-and-feel of their new portable hard drive. The enclosure consists of a black on the top and silver on the sides and bottom. It's bulky and thick for the 4TB capacity due using 15mm drives under the hood rather than 9.5mm version that the Seagate Backup Plus line uses. The 2TB My Passport Pro is more slim, it uses twin 9.5mm drives to reach its 2TB RAID0 capacity. The WD drive can be configured to either RAID1 or JBOD, however, which makes it a more flexible portable than the Seagate and the Thunderbolt connectivity fits better with creative workflows than Seagate's USB 3.0. 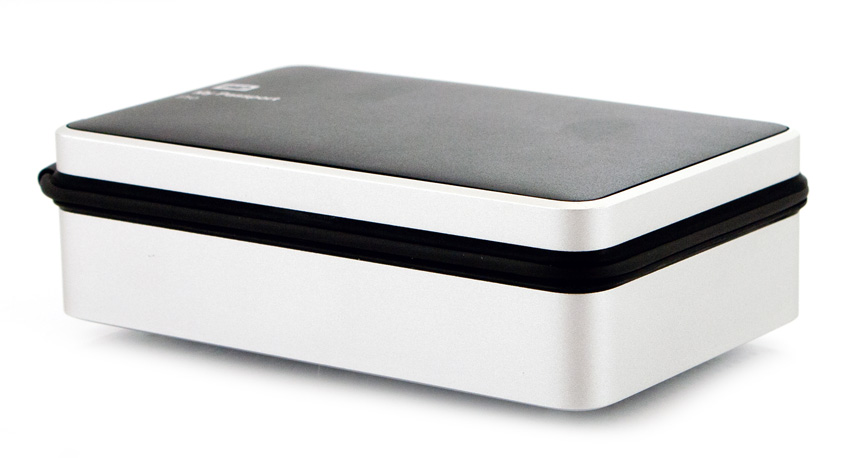 On the side, you will see a tiny fan (with the ventilation on the bottom); however, the fan is just a precautionary measure and won’t turn on very often. 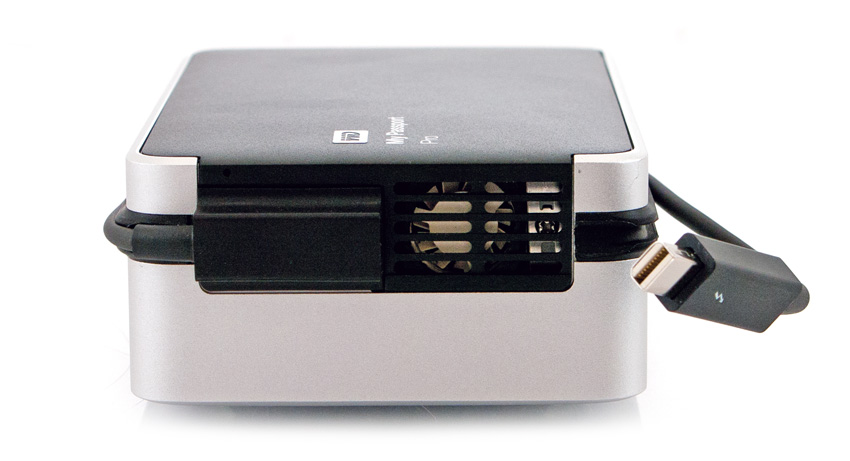 With the one Thunderbolt port, daisy chaining is not supported. WD, however, indicated to us that creative professionals preferred a bus-powered device more than daisy chaining with AC power. This makes sense, as the former is better for remote sites and field work. Those with MacBook Pros also have access to two Thunderbolt ports in their systems, meaning they can take advantage of 8TB of portable data at once without the need for daisy chaining. 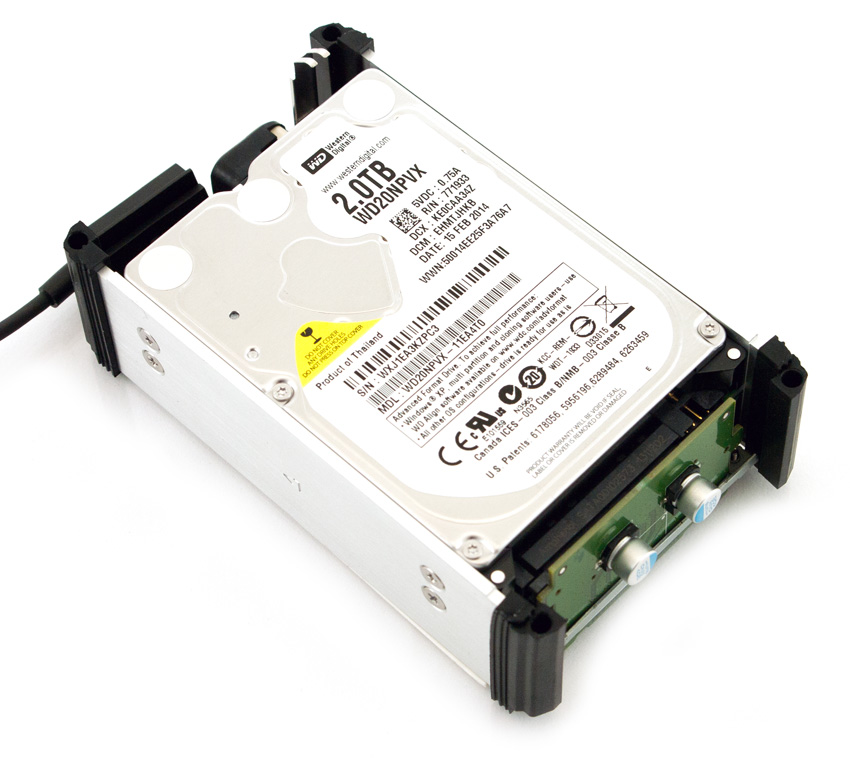 The most intriguing design aspect of the WD My Passport Pro is the decision to use an integrated wrap-around cable design, which is not user replaceable. WD has indicated that cable has gone through the ringer test-wise and they worked with Intel on the design. That said it's arguably unattractive from a design standpoint and could become a point of failure over time. Of course the cable does mitigate the need to carry a Thunderbolt cable in a gear bag and WD offers a three year warranty, which is lengthy in the portable drive space.

Like all drives in the My Passport family, WD includes a simple software package to handle the diagnostics and other drive management duties of the WD Passport Pro. Additionally, users can run three drive tests, including a simple SMART data scan as well as a detailed, full mediascan that checks for bad sectors on the drive.  For a complete review of the software, please see the WD My Passport Ultra review.

The Configuration tab in RAID management section allows users set the RAID of the WD drive. 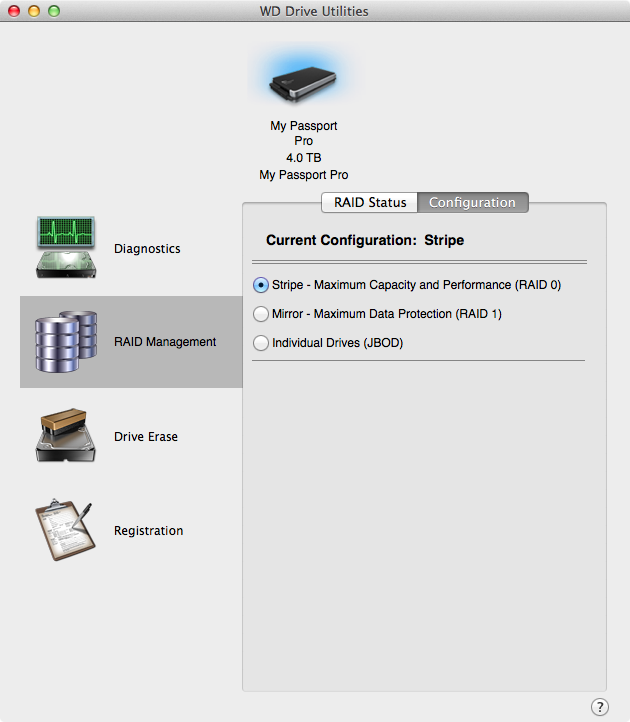 The RAID status tab allows users to see the current status of the RAID as well as both drives. 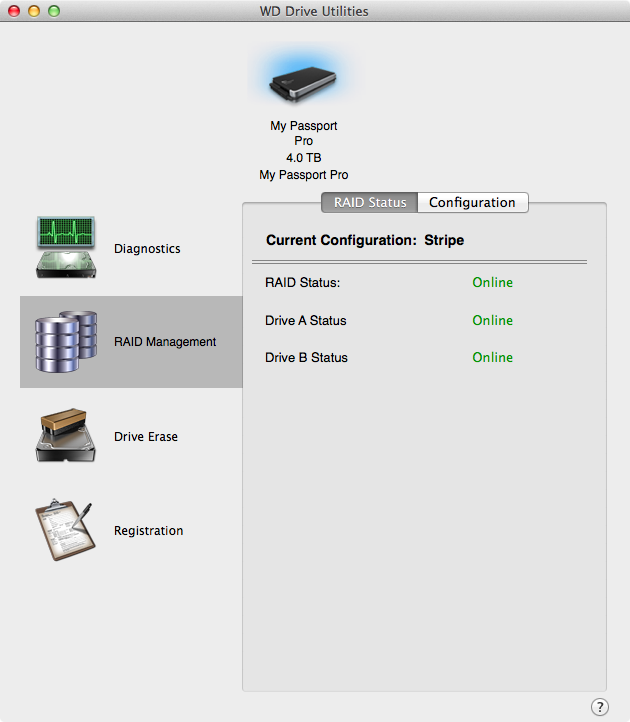 With the Drive Erase section, users can format their WD drive in either HFS or ExFAT format. 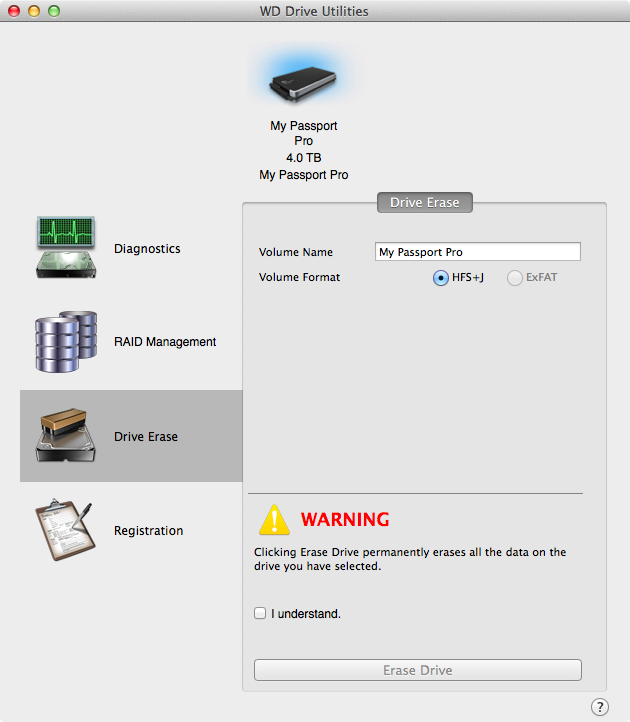 Performance
Our comparables for this review are the following:

We measured transfer speeds from the WD My Passport Pro over Thunderbolt connected to a current generation MacBook Air using the Blackmagic Disk Speed Test with a 5GB test file. In this environment, under RAID0 configuration, read speeds measured in at 203.9MB/s, while write activity hit 196.1MB/s. The G-Tech clocked in at 125.5MB/s read and 124.1MB/s write speeds while the Buffalo Ministation posted results of 115.1MB/s on both the sequential read and write tests. WD clearly benefits from the throughput of two drives in this case, where the other solutions are single-drive. In RAID1, we measured 103.4MB/s read and 97.9MB/s write. As for our comparables, the G-Tech came clocked in at 125.5MB/s read and 124.1MB/s write speeds. 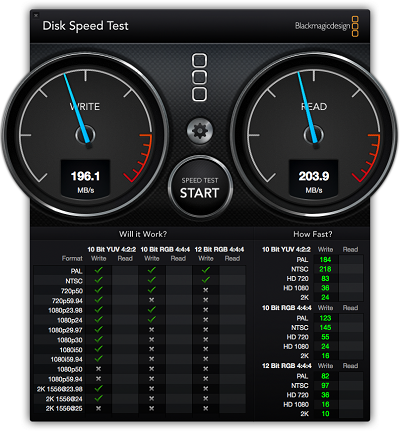 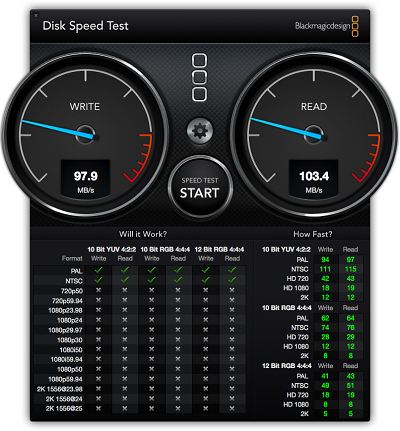 We put the My Passport Pro through the AJA test with the drive configured in both RAID0 and RAID1. Performance boasted results very similar to our previous tests with write speeds topping 205.1MB/s and reads hitting over 205MB/s for RAID0. In our RAID1 configuration, we recorded read and write speeds of 100.7MB/s and 102.7MB/s respectively. 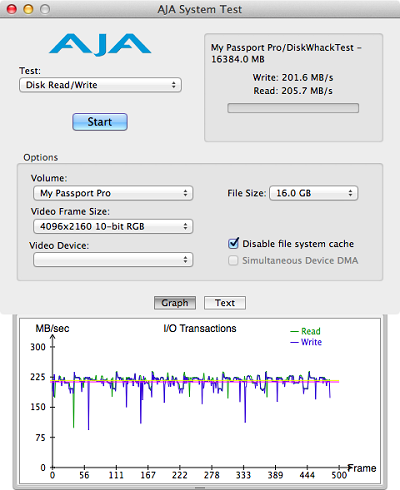 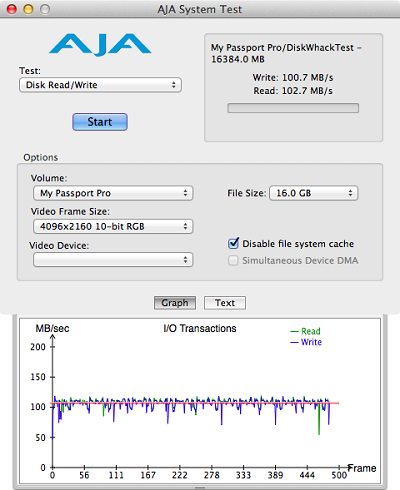 The WD My Passport Pro portable hard drive provides 2TB or 4TB of portable storage with some good numbers to boot. One of the features we really liked was the ability to easily configure drives in either RAID0, RAID1, and JBOD, allowing the WD portable to cater to many different kinds of use cases. WD also offers a complete suite of software tools to manage the drive as well. The unit itself is a little odd looking in the 4TB capacity, the bulky design is forced by the fact that WD's 2.5" 2TB HDDs are 15mm in z-height, so there's only so much they could do, the 2TB capacity is more slim. The integrated Thunderbolt cable is going to be another love it or hate it feature, it's a nice usability benefit, but also a potential failure point. That said, we liked that no external power source is required to run the My Passport Pro, which is exactly what its target demographic demanded, WD says. As far as pricing goes, the drives are in-line with other premium offerings for Mac users at the 2TB capacity, the 4TB is unique.

Looking a bit further into its performance, we measured transfer speeds of 203.9MB/s read and 196.1MB/s write. Though these numbers were fairly good for its class, they were unfortunately a bit below what WD had claimed it could reach, which was quoted to hit the 233MB/s mark. That said, this portable drive wasn't intended to break any speed records, it was intended to offer performance–along with a plethora of storage–that would be well suited for any creative professionals looking for an affordable and viable option for editing work on the fly. On that, it certainly delivers.

The WD My Passport Pro suits the needs of creative professionals and enthusiasts alike who need to shuttle large volumes of data in the field. The abundant 4TB capacity certainly delivers on this goal and the Thunderbolt connectivity lets the drive flow seamlessly with existing workflows.

WD My Passport Pro at Amazon