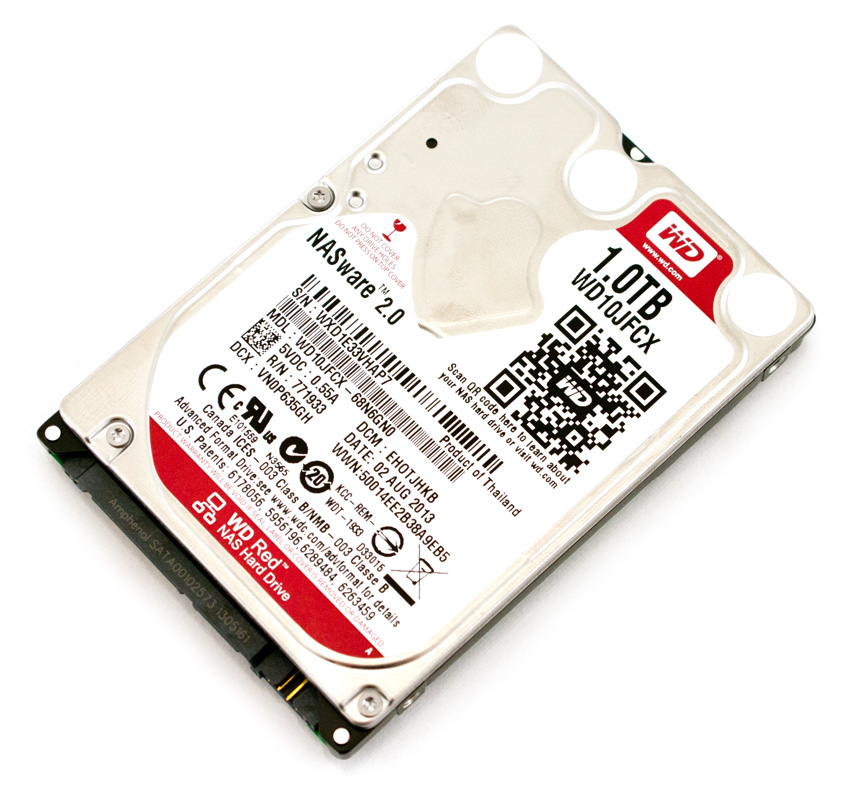 The move to 2.5″ NAS drives is interesting in that when we look at mainstream NAS vendors, there aren’t exactly a pile of small form factor NASs around. In fact, the only one to hit our lab in the last many years is the Synology DS411slim which if you ask Synology, they’ll tell you the diminutive NAS was designed more as a proof of concept and a gadget, than a specific-use type of NAS. The idea of having smaller NAS units on desks and in more conspicuous locations than server rooms and telco closets may mean the market is primed for growth. There are also some industrial and military NAS designs that rely on SFF drives, but those don’t exactly make up a large slice of the market. WD is an enabler then with the 2.5″ NAS hard drive, punching out a product that seeks to call Synology, QNAP, Netgear and others to the table to design and manufacture more small NAS systems. With the 1TB top capacity Red, the idea isn’t crazy; 4 or 5TB of data in a NAS that’s hardly larger than the drives themselves might be a compelling offering for the home and small office.

The 2.5″ WD Red comes in 1TB (WD10JFCX) and 750GB (WD7500BFCX) capacities. WD’s Red lineup is designed for small NAS systems with up to five drive bays. Our review units include five of the 1TB Red drives.

The 1TB WD Red is offered in a slim 2.5″ form-factor with a 9.5mm z-height. This size allows it to fit in almost all mounting conditions with space concerns and matches the size of other 1TB models on the market. WD follows their standard design scheme with a single sticker on the top cover giving users information such as model, capacity, data of manufacturer and other details. 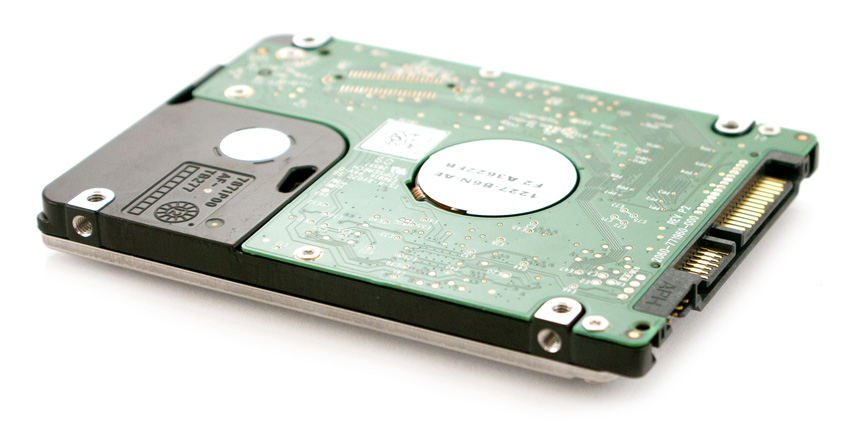 Looking inside the 1TB 2.5″ WD Red, we find a Marvell 88i9446 controller as well as 16MB of cache provided by a Winbond DRAM package. This setup is similar to the one found on the 9.5mm 1TB Scorpio Blue, although with a different controller. 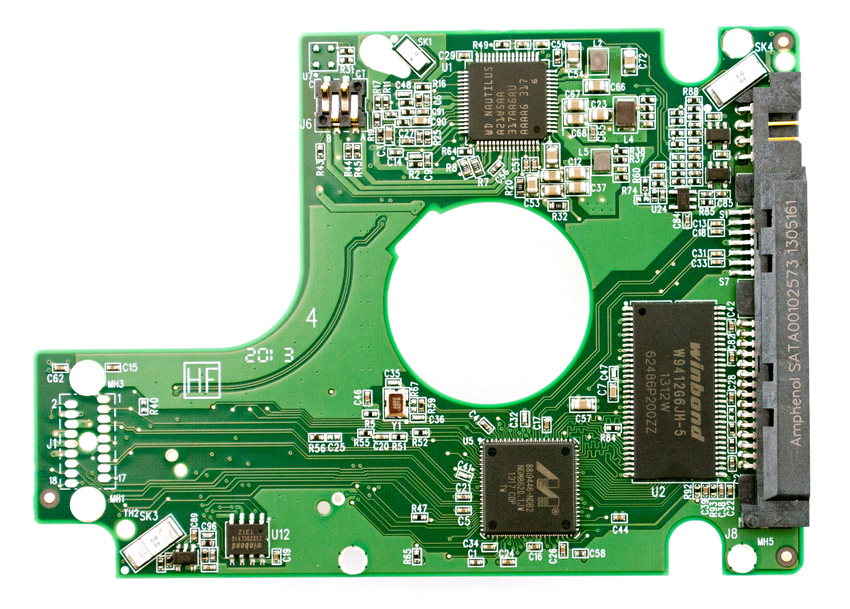 24×7 operation in small NAS systems entails engineering for performance characteristics different from other drives. Because there are no other comparable drives with both a 2.5-inch form factor and tuning for NAS devices, we will compare the 1TB Red with two other recent 2.5-inch drives: the HGST Travelstar 7K1000 and WD’s Blue Slim 1TB to get an idea how Red distinguishes itself from other drives with the same form factor. Each drive is benchmarked on its own, and then benchmarked in sets of five drives in the Synology DS1513+, Synology’s latest high end 5-bay NAS unit.

Synthetic benchmarks show the performance of the drive in an uncached “worst case” scenario. In the 4k FIO synthetic read/write test, the WD Red 1TB had similar performance characteristics to its cousin, the WD Blue Slim. Both outperformed HGST’s Travelstar 7K1000.

This pattern holds true in the 4k maximum latency benchmark, although the WD Red 1TB slips farther behind the WD Blue Slim in maximum read latency.

Charting the standard deviation underscores the overall finding of the 4k synthetic benchmarks: the WD Red 1TB is able to maintain performance that is close to the WD Blue Slim, with both of WD’s offerings coming out on top of the HGST Travelstar 7K1000.

The 128k large block sequential benchmark shows the highest sequential transfer speed for a platter drive with 100% write and 100% read activity. WD’s 2.5-inch drives lose their dominance here, as the Travelstar 7K1000 performs similarly to the WD Slim in the read test and betters both WD drives in the write test.

In the second half of this review, we show the performance of both the new 2.5″ WD Red 1TB and the 3.5″ WD Red 4TB HDD. WD supplied StorageReview with 5 samples of both new HDDs, which we configured in RAID5 in our Synology DiskStation DS1513+. Leveraging SMB/CIFS shares we show how well a 50GB test sample size performed on each storage array we created. 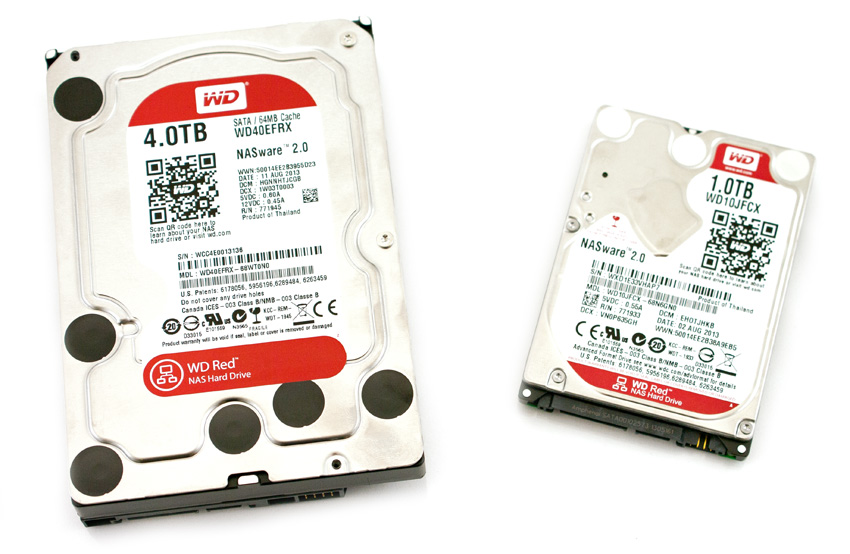 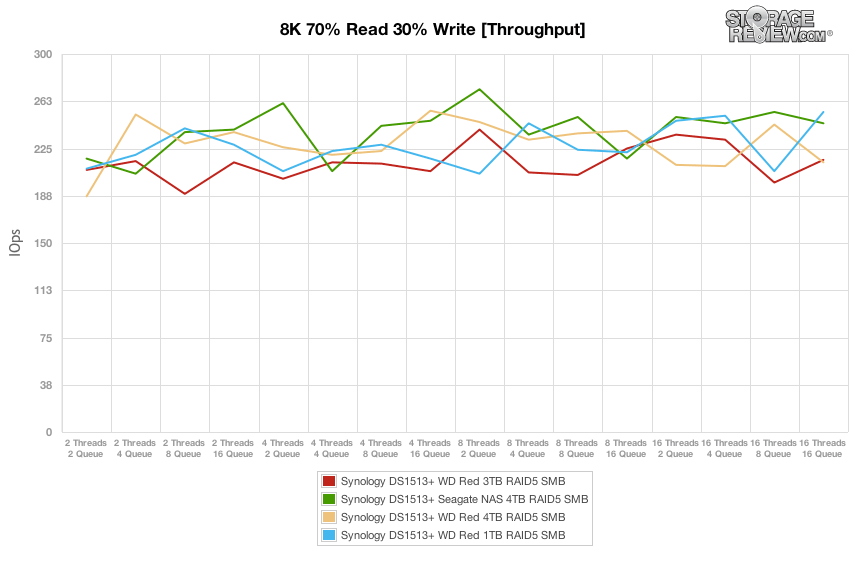 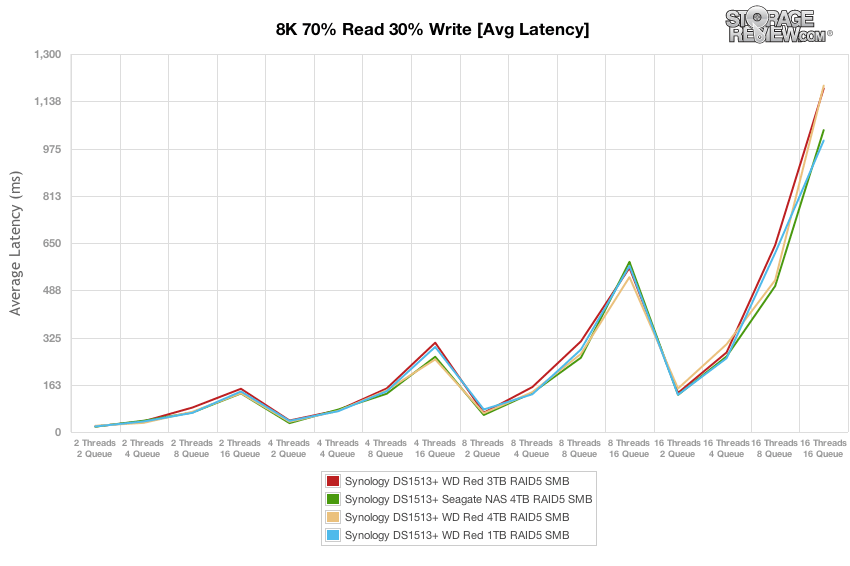 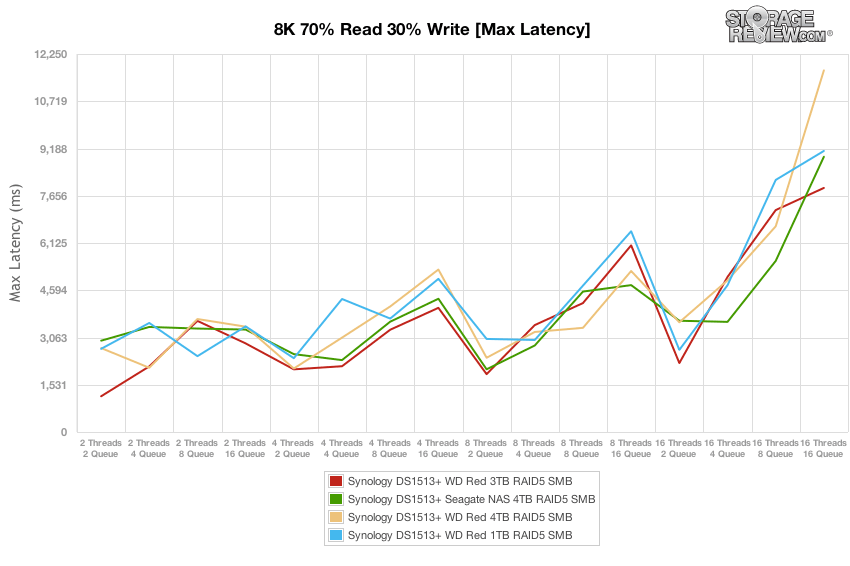 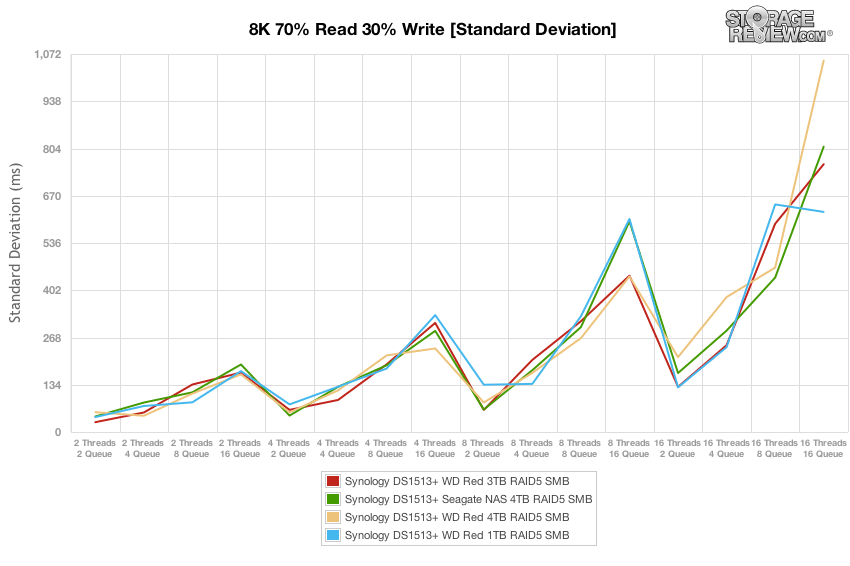 WD Red features several technologies deployed to improve the drive’s suitability for NAS devices. As a result of this effort to tune the drive, Red drives achieve a 35% improvement in mean time between failures when used as part of NAS arrays, according to WD. The 2.5-inch Red drives feature version 2.0 of NASware, WD’s hard drive firmware which reduces noise and power consumption, enables users to monitor performance and reliability via the SMART command set, and provides error recovery tools. WD’s Intellipower low power spindle drops power consumption in drives meant for continuous 24×7 operation in order to reduce cost and heat.

In our tests we found the 1TB 2.5″ WD Red to offer strong performance compared to the WD Slim (5,400RPM) and the HGST 7K1000 (7,200RPM). The 1TB Red offered stronger 4K random performance, although slipped behind the faster-spindle HGST model when it came to sequential transfer speeds. In a 5-drive group installed in a Synology DiskStation DS1513+, we found it to even offer competitive performance against 3.5″ NAS-specific models, with the exception of storage capacity which the other models had a 400% advantage.

The first drives in WD’s Red lineup were 3.5-inch drives, intended to provide a straightforward answer to the question: What is the most suitable drive for use in NAS devices? WD’s new 1TB and 750GB Red drives leverage the technology and market recognition built by the larger Red drives in order to move ahead into the small form factor NAS market. WD is betting that consumers will soon be asking the question: What is the most suitable 2.5-inch drive for NAS devices? The 2.5-inch WD Red drives are in a good position to answer that question and in doing so, establish early leadership for WD in small form factor network storage.

WD is betting on the emerging market for NAS devices with 2.5-inch drive bays, and has gotten into the market early. If you are looking for a 2.5-inch NAS drive, the WD Red 1TB should definitely be on your radar.