The WD Xe is a 6Gb/s SAS hard drive in a 2.5" 15mm form factor. The Xe drives spin at 10,000 RPM, offers a 32MB cache and provide throughput of up to 204MB/s. The drives are offered in capacities up to 900GB and a self encrypting drive (SED) option is available across the entire lineup. WD also offers an optional 3.5" bracket/heat sync that lets the Xe fit into legacy 3.5" environments, where they can be use to replace lower capacity and more expensive to operate 3.5" 15K drives.

The WD Xe is a 6Gb/s SAS hard drive in a 2.5" 15mm form factor. The Xe drives spin at 10,000 RPM, offers a 32MB cache and provide throughput of up to 204MB/s. The drives are offered in capacities up to 900GB and a self encrypting drive (SED) option is available across the entire lineup. WD also offers an optional 3.5" bracket/heat sync that lets the Xe fit into legacy 3.5" environments, where they can be use to replace lower capacity and more expensive to operate 3.5" 15K drives. 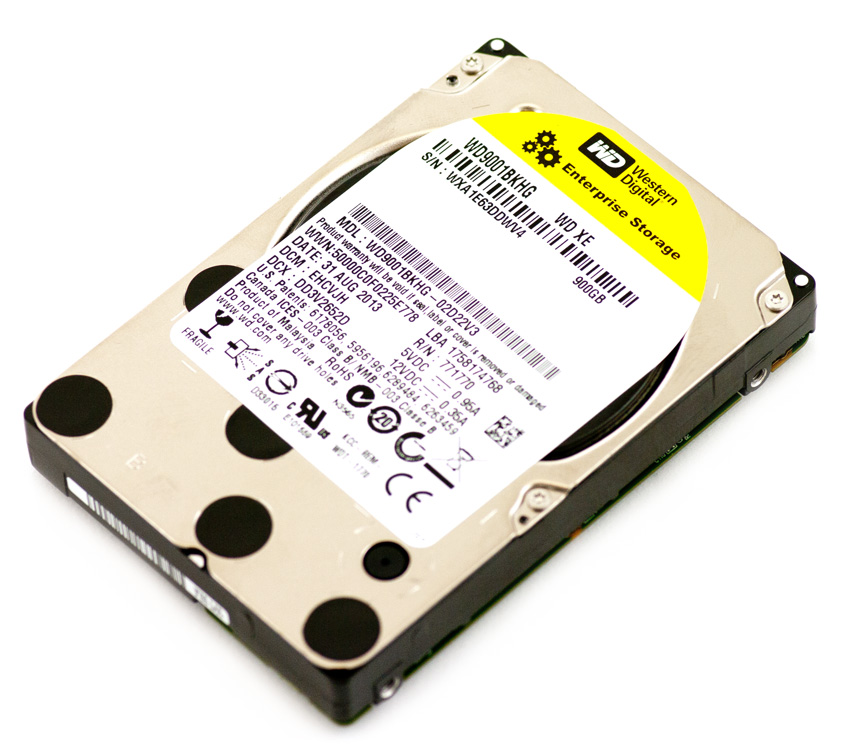 WD has focused significant engineering effort for the Xe line. The drives incorporate a bevy of technology designed to ensure long term operation in the enterprise. This feature set is highlighted by key items like Rotary Acceleration Feed Forward (RAFFTM), which optimizes operation in vibration-prone environments, and NoTouch ramp load technology, which means the head never touches the disk media. These features and others lead the Xe to an industry-high 2,000,000 hours MTBF.

The Xe slots in as the mainstream performance hard drive for the enterprise datacenter market. WD also offers two other drives for this market; the Re, a 4TB 7,200 RPM SATA drive for mainstream storage and the Se, a 4TB 7,200 RPM SATA drive tuned for NAS and scale out architectures. The WD Xe comes in 300GB, 450GB, 600GB, and 900GB capacities and are compatible with the 3.5" heat sync for environments that require it. Our review units include 16 of the 900GB capacity.

The WD Xe is a 2.5" enterprise SAS HDD with a 15mm z-height. It offers an industry-standard SAS 6Gb/s connection, although its peak sequential transfer rate is rated at 204MB/s. Western Digital uses a very basic external drive design, with a black alloy case and a circuit board using all available space allowed by its form-factor.

At the heart of the Western Digital SAS-based Xe is a Marvell i1248-C2 controller leveraging 32MB of Samsung DRAM for buffer. This differs from its HGST-cousin C10K900 which leverages an LSI controller with a 64MB DRAM buffer. 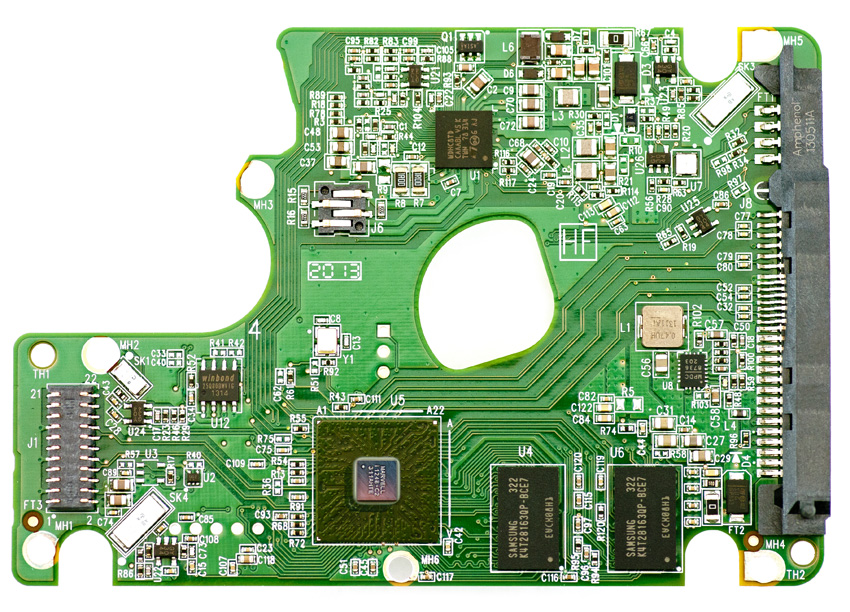 In the first of our enterprise workloads, we measured a long sample of random 4k performance with 100% write and 100% read activity to get our peak sustained random I/O results. The WD Xe slots into the middle of the pack, coming in just under the Seagate Savvio 10K.7 in read performance and trails the HGST 10K900 at the top of the pack. In terms of write performance, it came in second to the HGST 10K900.

With a heavy effective queue depth of 256 in our random 4K read and write test, we measured an average read latency of 585ms and a write latency of 672ms from the Xe under load.

Comparing peak response times from each 10K enterprise drive, the Xe slotted into the middle of the pack in terms of rear latency although came in with the highest write latency.

Drilling into latency consistency with our standard deviation measurement, the WD Xe came in at the back of the pack with the highest measurement in both read and write activity.

Compared to the fixed 16 thread, 16 queue max workload we performed in the 100% 4k write test, our mixed workload profiles scale the performance across a wide range of thread/queue combinations. In these tests, we span workload intensity from 2 threads and 2 queue up to 16 threads and 16 queue. In the expanded 8k 70/30 test, the WD Xe slotted itself into the middle of the pack with transfer rates scaling from 194 IOPS at 2T/2Q to 398 IOPS at 16T/16Q. 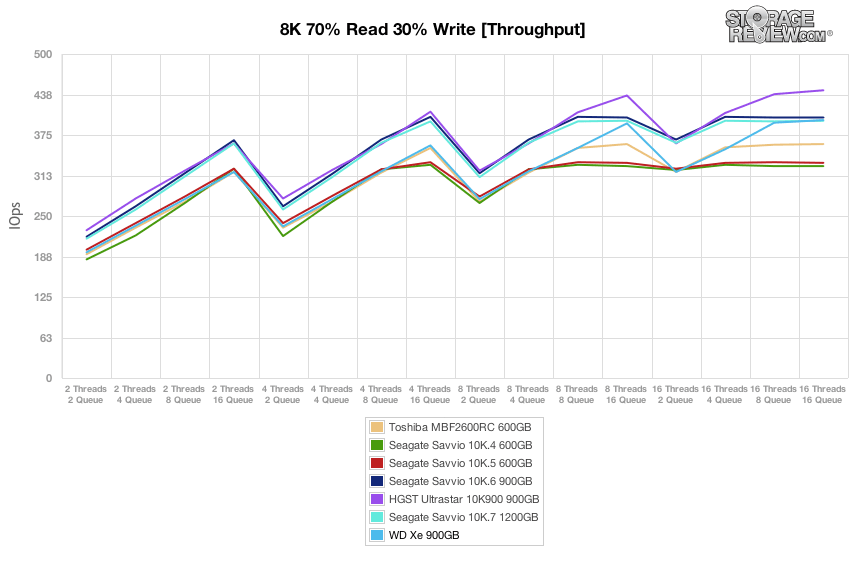 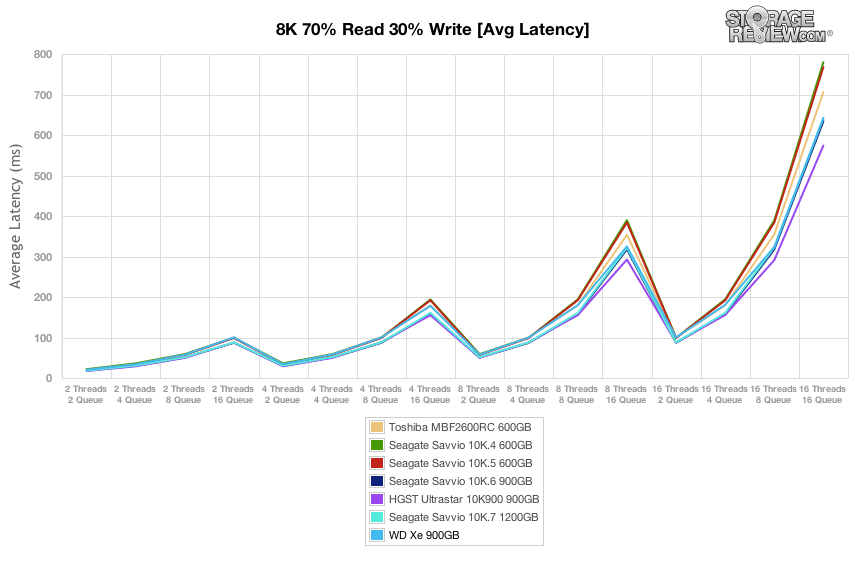 Compared to the rest of the group in our 8k 70/30 workload, the WD Xe had some of the higher peak response times at our higher effective queue depths, trading places with the HGST 10K900 in some areas. 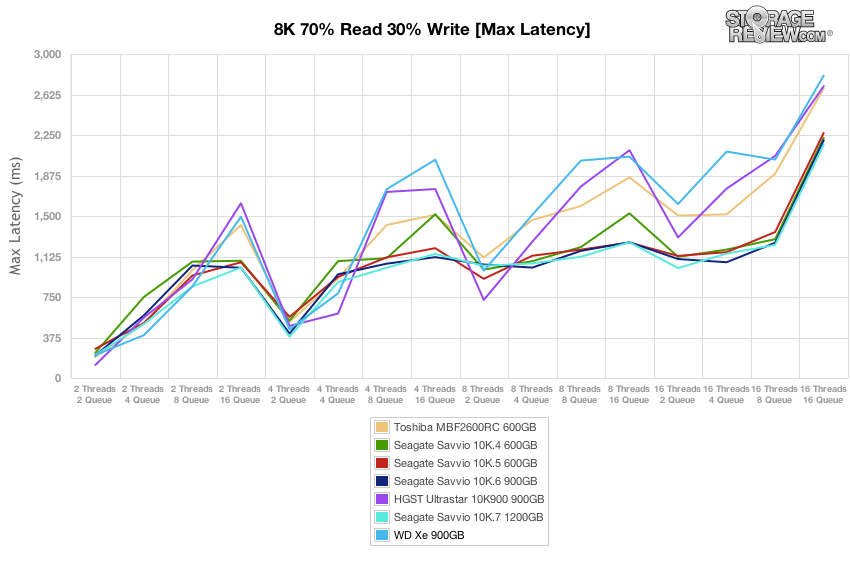 Dialing into latency consistency, the WD Xe trailed the pack as the loads increased, with the highest standard deviation figures. 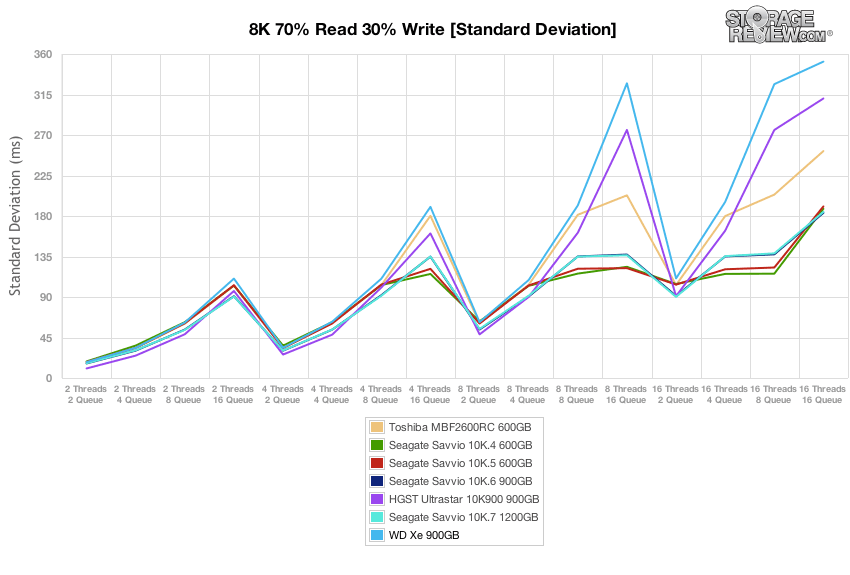 The next workload we used is our File Server profile which puts the drives through a varying workload. We scaled the thread and queue count from 2T/2Q up to 16T/16Q. Under this range of workload, the WD Xe continued to run middle of the group, with performance ranging from 195 IOPS at 2T/2Q up to 402 IOPS at 16T/16Q. 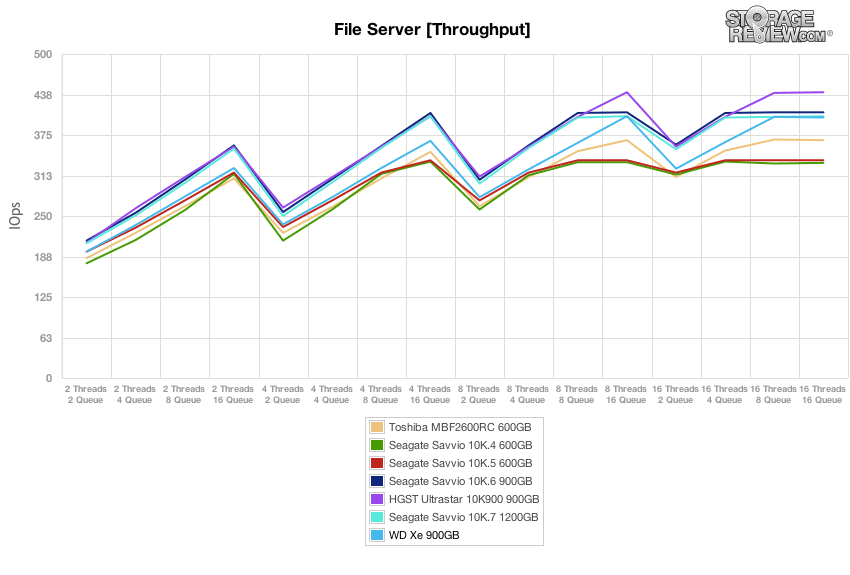 Peak response times in our File Server workload continued to edge towards the top of the pack, trading places with its cousin the HGST 10K900. 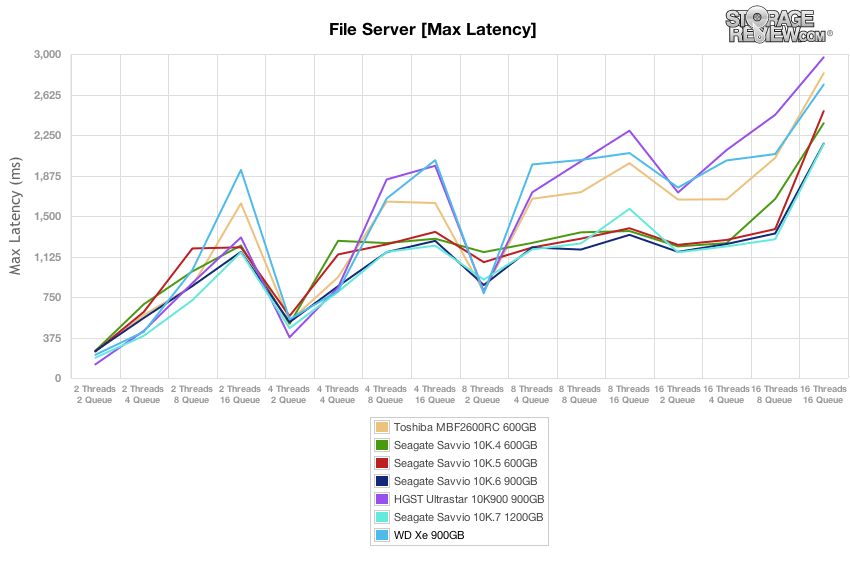 Comparing latency consistency, we noted weaker standard deviation from the WD Xe, although it came in very close to the HGST 10K900. Our final test covers a simulated Web Server profile, which contains 100% read activity. In this final workload, the WD Xe narrowed the gap slightly and ranked towards the upper middle of the pack. We measured throughput from 198 IOPS at 2T/2Q which scaled up to 427 IOPS at 16T/16Q. 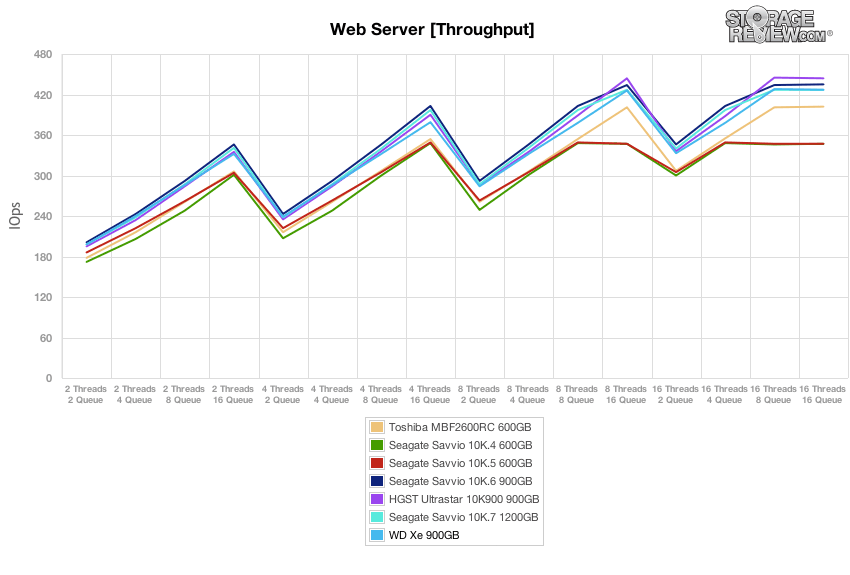 With 100% read activity, the WD Xe was able to move up the pack in terms of its max response times, edging out the Toshiba and HGST comparables. While peak response times were improved over previous workloads with mixed read and write activity, latency consistency as measured in our standard deviation test still came in towards the bottom of the pack, although only slightly higher than the HGST 10K900. The WD Xe SAS hard drives offer a modest refresh of WD’s first 2.5" SAS offering that came out last year, the S25. The drive tops out at 900GB and is firmly targeting the OEM and legacy hard drive replacement markets. The Xe is WD’s highest performing enterprise hard drive, slotting in above their 3.5" high-capacity options. Within the Western Digital company the Xe also has a close relative in the HGST Ultrastar 10K900. These drives differentiate in a few ways; the HGST uses an LSI controller, the WD a Marvell, and the HGST uses a 64MB cache where the WD is only 32MB. There are of course subtle technology differences inside and via firmware, but from a market positioning standpoint, it’s reasonable to think of the Ultrastar as the higher-end offering between the two. That doesn’t detract at all from what the Xe brings to the table though, including WD’s highest MTBF rating of 2 million hours and a five year warranty.

Tearing into the performance data for performance hard drives seems to get more difficult with every revision as the margins of difference are often single percentage points and even "wide" margins are nearly impossible to detect across a large swath of drives in operation. This of course is good for OEMs, which like to multi-source just about everything, storage included. The trick then in to offer enough performance out of a hard drive while delivering on other factors like endurance, reliability and cost/GB. As noted above, WD has made technological gains that get to the heart of the endurance and reliability argument, posting their highest ever MTBF rating, which equals HGST, who is historically the industry leader on that metric.

Looking at the data though, we see the Xe slots in below the HGST 10K900, although follows a similar performance profile across the thread and queue count. Compared to other current-generation 10K SAS drives the WD Xe tended to trail the pack slightly. Looking at other attributes such as peak latency and standard deviation, the WD Xe stood out at the top of the group with slightly less consistent output and slightly higher response time peaks. Note these are very small differences in the whole scheme of things, and in some areas traded places with its cousin the HGST 10K900. Overall though the WD Xe offered dependable performance across all of our workloads, showing gains against previous-generation comparables. For OEMs looking to reach a required performance tier, the WD Xe follows the pack in performance and also adds in plenty of reliability features to make sure it keeps running smoothly years into operation.

The WD Xe provides another alternative in enterprise and data center markets that are looking for high-performance, high-capacity storage that offers a compelling price/performance ratio with industry-leading reliability specs.

WD My Book and My Book for Mac Review