Today’s workloads require modern storage and networking solutions. Developers and administrators cut their teeth using public cloud resources and are demanding the same experience and freedom they’ve had with them in their current workplaces. HPE is leading the field in this regard with its new line of HPE Alletra storage arrays, which provide an API-driven abstraction layer that mimics that of the public cloud.

Today’s workloads require modern storage and networking solutions. Developers and administrators cut their teeth using public cloud resources and are demanding the same experience and freedom they’ve had with them in their current workplaces. HPE is leading the field in this regard with its new line of HPE Alletra storage arrays, which provide an API-driven abstraction layer that mimics that of the public cloud. 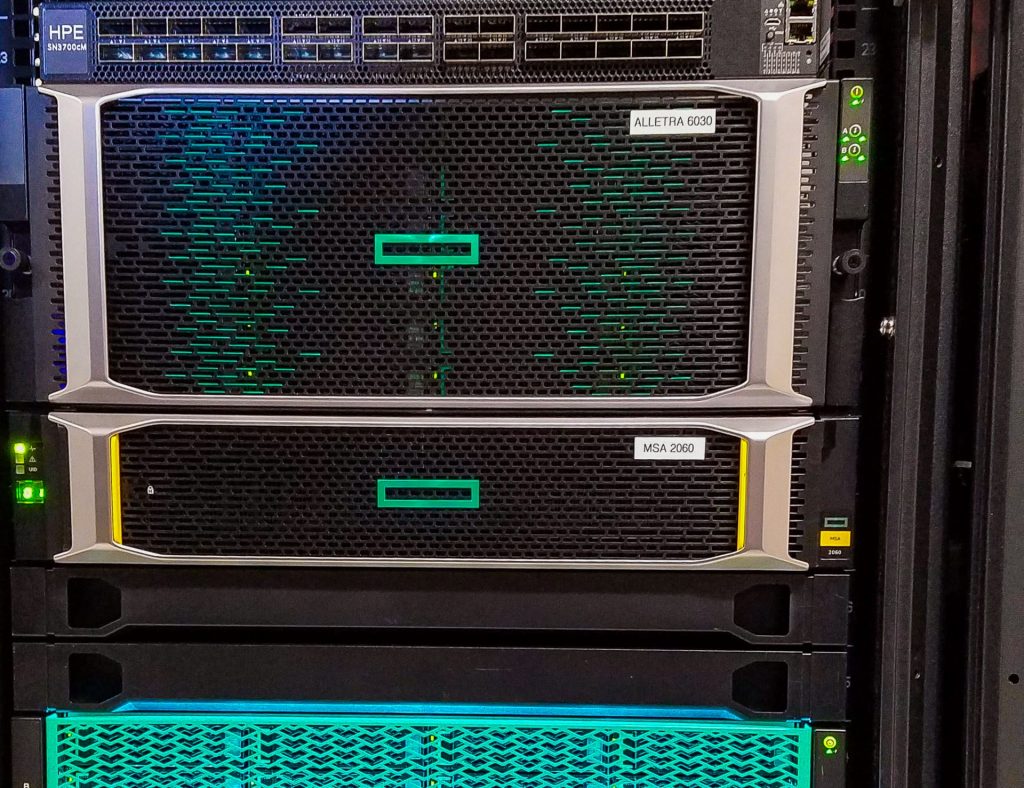 But it is more than about having a common API for the consumption of storage to make modern storage. Today’s workers no longer have the desire to go through storage administrators to be allocated the storage they need, and today’s workloads require extremely performant storage as well as the network to support them. HPE has heard these needs and is taking on the challenges of modern workloads with their new line of Alletra storage arrays and M-series switches.

Alletra takes many of its cues from the Storage-as-a-Service (SaaS) world than what we have become accustomed to with traditional storage; it has an API-first mentality and can use HPE’s soon-to-be-released Data Service Cloud Console (DSCC).

The API’s calls made to it are the same regardless of whether the storage is on-premise or hosted in the cloud. The APIs not only allow access to storage but also management functions such as volume provisioning and expansion. Even advanced features, such as cloning and snapshots, can be accessed programmatically.

DSCC is a cloud-based SaaS from HPE that enables a public cloud-like experience for users and administrators and is accessible from anywhere. Moreover, it can interact with IT resources regardless of where they reside – in the cloud, on the Edge, or in a data center. DSCC will work with many HPE products including Alletra storage arrays.

DSCC can automatically locate new IT resources, such as storage arrays, and integrate them in minutes. For storage resources, HPE has implemented a self-service, intent-based model rather than a LUN-based model, for the provisioning of storage. This allows DCSS, through the use of AI and application-specific policies, to place data on the storage that best fits its requirements.

DSCC eliminates the need to request storage from a storage administrator who then must comb through their storage resources to find an array that matches the needed requirements. And while new technology can be scary and often go through a series of growing pains, DSCC is the natural progression of Aruba Central which has proven itself in the field and has been implemented by over 90,000 customers and millions of end-devices worldwide.

HPE Alletra is designed with business continuity in mind through not only its support of synchronous metro replication, but also its integration with HPE Cloud Volumes (CV), a cloud storage service that provides storage on-demand using the most popular public cloud providers: AWS, Azure, and GCP.

Although HPE is leading their Alletra story with their consumption and management innovations, the hardware they are using is state-of-the-art. These arrays are all backed with NVMe SSDs, and they have loads of connectivity options including Fibre and 100 Gbps Ethernet. They are also extremely performant and can deliver up to two million IOPS and have latency as low as 250μs. Additionally, to ensure that they aren’t hamstrung by the network, HPE has their line of M-series switches which are powered by NVIDIA Spectrum and can handle the network demands that HPE Alletra storage arrays put on them.

Many companies are contemplating moving away from a CAPEX model of purchasing compute resources as they require a large up-front investment in comparison to a cloud-like OPEX model where resources are paid for as they are consumed. To support those customers who want to go with an OPEX consumption model, HPE has included both their Alletra and M-series products in their GreenLake pay-per-use model. This provides the customer with the flexibility to deploy resources as needed and with the option to have them fully managed if desired.

To meet the wide range of requirements of companies deploying modern workloads, HPE has introduced two lines of Alletra storage arrays: the 9000 and 6000.

The 9000 backs its mission-critical use with a 100% availability guarantee made possible by its active-active storage controllers and by having automatic failover between arrays. To meet the performance requirements of modern workloads, it can deliver more than two million IOPS and supports the most demanding workloads including up to 96 SAP HANA nodes. 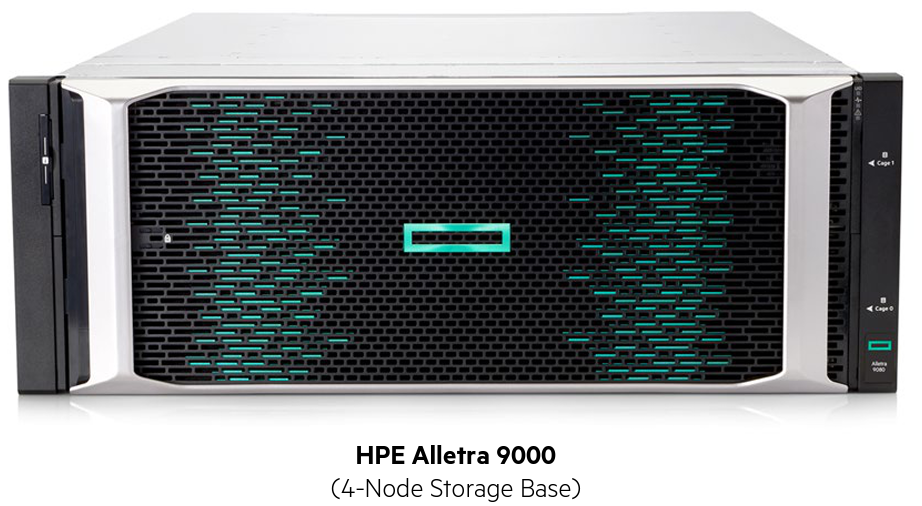 The spec sheet for the 9000 series shows two models: the 9060 and 9080. Both can have either two or four nodes with dual procs in each node. For storage, they can host 144 NVMe SSDs. For connectivity, they support up to 48 Ethernet or Fibre host ports, as well as two 10GBaseT and two 100GbE ports per node.

Many storage arrays deliver uneven IOPS, but this is not the case with the Alletra 9000 as HPE has benchmarked these systems and state that they can deliver 75% of their I/O with 250μs or better latency. This is a huge benefit as it allows for a highly predictive latency for workloads. The units also have non-disruptive controller upgrades and the ability to replicate to a third site if desired.

Although the 6000 has its roots in Nimble Storage, it has been reengineered to take full advantage of the latest technology (such as NVMe devices) and can deliver up to three times the performance of its predecessor. It was designed with redundancy in mind for reliability purposes, and HPE backs up its reliability claims with a guarantee of six nines (99.9999) of availability – equating to less than 32 seconds of downtime a year.

The HPE webpage for the 6000 series shows five different models – 6010, 6030, 6050, 6070, and the 6090 – each containing dual redundant storage controllers, 24 drives per enclosure, and Triple+ Parity RAID for data protection (triple drive and intra-drive parity). All the units have 8 1GBase-T ports for onboard management (OBM) as well as other networking connections for data flow.

The 6010 supports one additional expansion shelf, whereas the other models support two shelves.

For customers who need more storage capacity, HPE offers a scale-out 4X 6090 which quadruples the capacities of the 6090.

It doesn’t matter how fast a storage array is if it can’t traverse the network in a time-sensitive manner. HPE’s M-series of switches can handle the huge capacity and extremely low latency of the Alletra storage arrays. They not only address the bandwidth requirements of the arrays, but they do it with consistently low latency and zero packet loss.

To meet a wide range of use cases, HPE offers switches within the M-series that have from 16 to 64 ports and up to 128 ports with breakout cables and support 1Gb/s to 200Gb/s ports. And although there are many switches in this series, they are all based on NVIDIA Spectrum ASICs.

The NVIDIA silicon in these switches gives them an industry-leading 300ns latency, which is one-third to one-half the latency of other switches currently on the market. They also have 16MB to 64MB of flexible fully-shared packet buffers within the ASIC which optimizes buffering and microburst absorption in a fair and predictable manner. To optimize storage data flows, they support fast explicit congestion notification (ECN) and technologies such as RDMA/RoCE.

HPE’s flagship switch is the M-series SN4600, which has a switching capacity of 12.8Tb/s from its 64 100GbE ports. It has non-blocking transfers at wire speed regardless of packet sizes, equating to an industry-leading 8.4Bpps processing capacity. The SN4600 has the highest port density while at the same time having the industry’s lowest power consumption.

Whether you are in financial services, media & entertainment, energy, or any other industry that requires highly-performant storage and the network infrastructure to deliver that storage to your physical, virtual, or containerized workloads, the combination of HPE’s M-series switches and Alletra storage arrays can meet the strains of the most demanding conditions.

In fact, with the HPE Alletra Storage arrays having 300us of latency, 2,000 TiB (effective) of storage, and 100GbE networking, and M-series switches (powered by NVIDIA Spectrum ASIC) having 300ns of latency, 128 ports, and support for 100 Gbps ports, it is hard to imagine a modern workload that these arrays and switches could not handle.

Not only has HPE developed a highly-performant, ultra-low-latency storage solution, but they have made it consumable through APIs and manageable from anywhere through their intuitive DSCC cloud-based management portal. 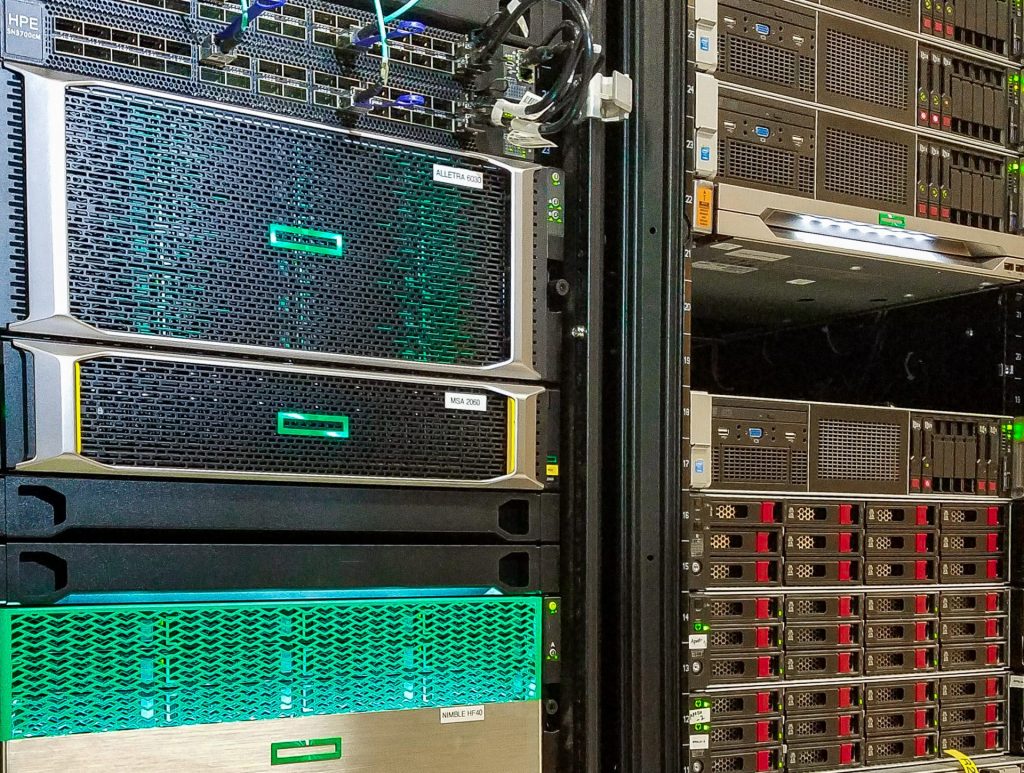 Because networking and storage are so interdependent, it is nice to know that not only has HPE completed extensive testing to ensure that these products work together seamlessly, but they have also taken ownership of both of these product lines. This prevents the time-consuming finger-pointing that can occur when trying to get to a root cause of an issue if and when one arises.

Business continuity is a major concern for any organization and Alletra arrays support metro clustering with synchronous replication to copy data to create a highly available storage repository. Furthermore, in the unlikely event that data is lost, using its integration with HPE CV, the data can be backed up in a cost-effective manner and restored quickly.

Modern workloads need modern storage and networking solutions, and this includes how they are purchased. As such, HPE offers not only traditional CAPEX purchasing of these products, but also offer an innovative OPEX offering through GreenLake.

All-in-all, HPE has taken the challenges of modern workload and developed a solution that can meet them.

This report is sponsored by Hewlett Packard Enterprise Development LP. All views and opinions expressed in this report are based on our unbiased view of the product(s) under consideration.