Rearview of Exos AP 2U24

The pandemic fueled the unprecedented growth in data generation and, ultimately, the need for advanced storage solutions. An IDC report commissioned by Seagate found that enterprise data is expected to grow at an average rate of 42.2 percent over the next two years, also finding 32 percent of available data is put to work, leaving 68 percent unleveraged. 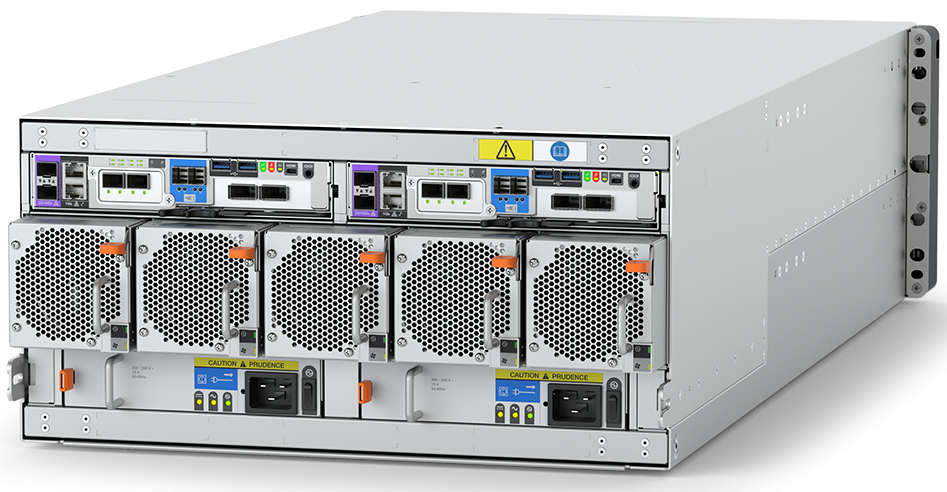 According to Seagate, the new Exos AP with AMD EPYC processors will “help IT professionals build a cost-effective data management strategy that intelligently captures, stores, and analyzes data today and leverages it in the future.”

Seagate’s DNA is storage. They have been producing high-capacity storage drives for over four decades, which shows in the drives they manufacture. Their foray into areas outside of pure storage has been focused and methodical. Seagate controllers (formerly Dot Hill) have been some of the strongest entry-storage controllers in the market for the better part of a decade.

We reviewed the Dell EMC PowerVault ME4 and the overall flexibility and growth potential. Even though it has a Dell EMC logo on the chassis, the controller powering the array is somewhat of a precursor to the Seagate Exos AP series. The PowerVault ME4 was designed as a low-cost storage array that could start with HDD, migrating to a hybrid model combining HDD and SSD in the same chassis, or a fully populated chassis array with SSD. This configuration flexibility thanks to Seagate controllers has been carried forward to the current Exos AP series platform.

Now we see the launch of the Seagate Exos AP. Application Platform in Seagate parlance translates to “storage server” for most others. In either language, we’re essentially seeing Seagate bring compute power closer to storage, no matter where it’s located. As noted, Seagate has gone with AMD EPYC 2nd Gen processors for this task, mostly due to the cost advantages they offer and the robust core count. Ultimately it will be up to the end-user to select the appropriate operating environment and configuration to deploy. Ultimately Seagate Exos AP offers quite a bit of flexibility in deployment.

Seagate Exos AP – Dealing with Data at the Edge

One particular strength of this new Seagate Exos AP system may manifest itself at the edge. Several challenges need to be addressed to move data from Edge to Core and Edge to Cloud. A multi-cloud consideration also affects how data is managed and effectively moved. Data collected at the edge typically remain there for some time. Additionally, that data might need to be processed locally rather than moved from edge to core and back.

We’ve seen this coming for a while and heard from many vendors about edge computing. Technologies dictating this demand for edge processing are driven by more affordable AI development, the proliferation of IoT devices globally, the growth of smaller edge data centers, and 5G deployment (AWS is offering 5G as a service).

This edge computing is also driving the sheer growth in data that must be stored at the edge. A great example of this is the success and demand for Autonomous Vehicles. Those vehicles collect data as they navigate highways and city streets, and that data must eventually be transferred to a host in the core. Rather than have that vehicle make the journey to the core, it can stop at the edge and offload the drives, refresh and be on its way. It’s efficient and cost-effective, and data is much easier to manage.

Probably a more urgent example would be healthcare. Hospitals need to collect and process that data at the edge as we continue to deal with this pandemic and the onslaught of covid variants. Waiting for data to traverse the network is not acceptable to treat diseases.

But it is more than just storage. There has to be intelligence in the platform to make a difference in how that data is treated. Seagate is addressing that need now with the Exos AP and the added processing power of the AMD EPYC CPU. These new Exos AP systems can be packed with SSDs or HDDs. Depending on the size of the operation, Seagate has developed some pretty flexible options for deploying into most enterprise environments.

The AMD SP3 7292P EPYC CPU is designed with 8, 12, and 16 core options. Additionally, the processors provide the solution with dedicated PCIe 4 lanes delivering 200GbE network connectivity along with high bandwidth to SAS controllers for improved HDD and SSD response. There are 4 DDR4 DIMM slots with expansion up to 128 GB memory and 12G SAS architecture.

Other highlights of the Exos AP system include onboard NVIDIA dual-port 10/25GbE I/O, two 10GbE onboard management/data connections, expansion slots, and support for single or dual M.2 NVMe SSD for redundant boot or log capture. 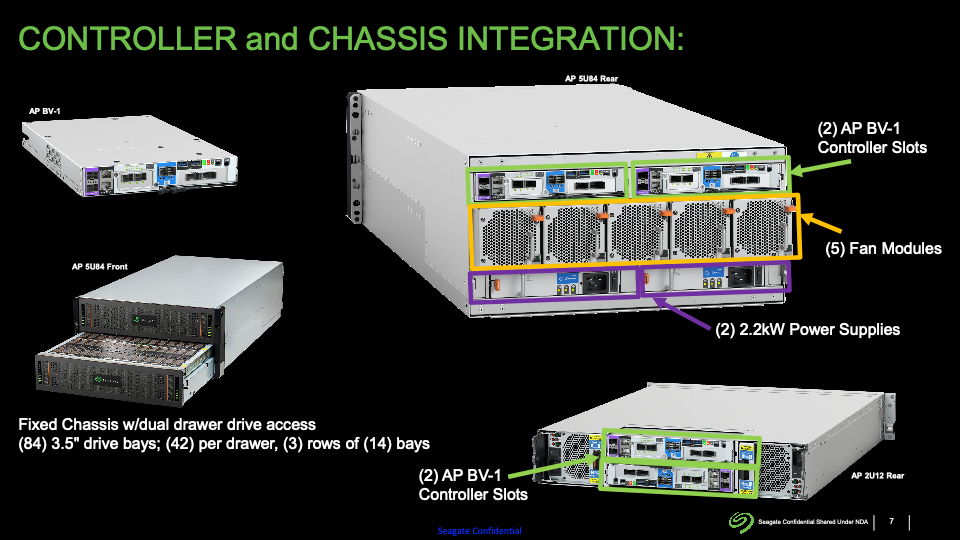 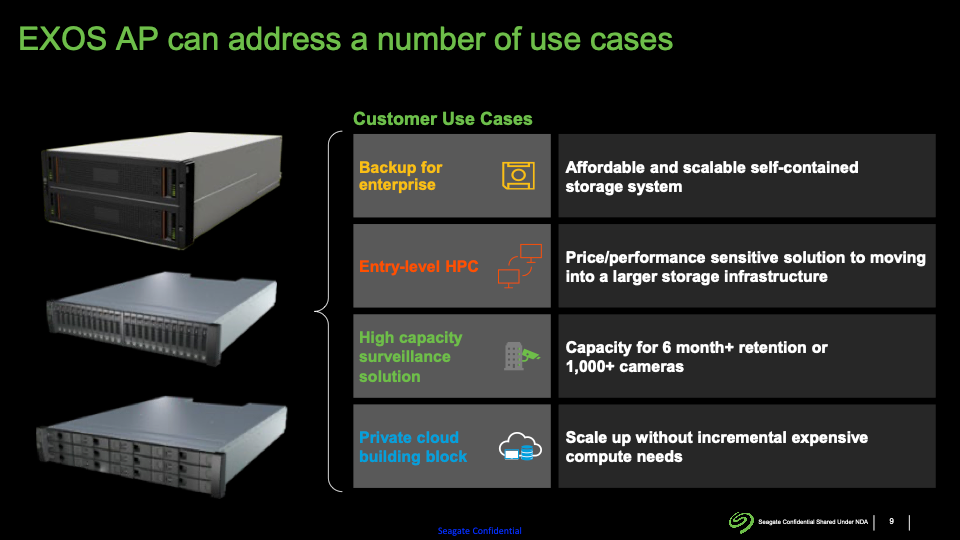 If the front of these chassis looks familiar, they’re the same offerings Seagate has had for some time in their SAN portfolio. Seagate Exos AP leverages existing chassis design, with these new storage servers. Now, with one chassis, Seagate is able to offer SAN, JBOD and server configurations, giving customers quite a bit of deployment flexibility.

Seagate has come up with a strong entry into the storage server market. The density of the enclosures and the addition of AMD processors make this a viable solution for SMB edge, Enterprise edge, and data center rack consolidation. There is undoubtedly a likely position for data centers to realize a reduction in TCO due to less rack space, heat dissipation, and density. Overall, this should open more doors for Seagate as momentum grows in the end-to-end storage server market.