Hyperconverged infrastructure (HCI) involves using a server’s local storage, coupled with software-defined storage (SDS), to create a virtual SAN whose storage is accessible from all the nodes in an HCI cluster. Using HCI, storage and compute are managed from the same console. To add compute and storage in a HCI cluster you only need to purchase additional HCI nodes instead of, as with legacy data center topologies, having to buy storage, integrate it with servers and then manage your storage and compute using different management consoles. Despite its advantages HCI is not a cure-all for data center woes; in fact, we are seeing an over-reliance on HCI adversely affecting the data center’s economics. Enterprises are now looking at alternatives, such as HPE’s distributed HCI (dHCI) solution that incorporates HPE’s ProLiant servers, Nimble Storage and M-series network switches as an alternative to HCI as it gives the benefits of HCI while removing the drawbacks of it.

Hyperconverged infrastructure (HCI) involves using a server’s local storage, coupled with software-defined storage (SDS), to create a virtual SAN whose storage is accessible from all the nodes in an HCI cluster. Using HCI, storage and compute are managed from the same console. To add compute and storage in a HCI cluster you only need to purchase additional HCI nodes instead of, as with legacy data center topologies, having to buy storage, integrate it with servers and then manage your storage and compute using different management consoles. Despite its advantages HCI is not a cure-all for data center woes; in fact, we are seeing an over-reliance on HCI adversely affecting the data center’s economics. Enterprises are now looking at alternatives, such as HPE’s distributed HCI (dHCI) solution that incorporates HPE’s ProLiant servers, Nimble Storage and M-series network switches as an alternative to HCI as it gives the benefits of HCI while removing the drawbacks of it.

HCI involves using a server’s local storage, coupled with software-defined storage (SDS), to create a virtual SAN (vSAN) that is shareable with other HCI nodes in an HCI cluster. With HCI, you only need to purchase a single node to add compute and storage instead of the alternative: having to buy separate storage arrays and manage them from different management consoles, as well as servers and the need to deal with integrating them.

Adding additional compute and storage capacity with a single product simplified the logistics of increasing the data center’s capacity, which can still be managed from the same control plane. Despite these benefits, however, HCI is not a cure-all for data center woes; in fact, we are seeing an over-reliance on HCI adversely affecting the data center’s economics.

The Challenges with HCI

The first widespread usage of HCI was for virtual desktop infrastructure (VDI), and it seemed as though VDI and HCI were a perfect fit. When additional desktops were required, this pairing gave us a good idea of how much storage and compute were needed for each desktop, and new HCI nodes could be designed to meet these requirements accordingly. This process made it relatively simple to architect, deploy, and expand VDI deployments. 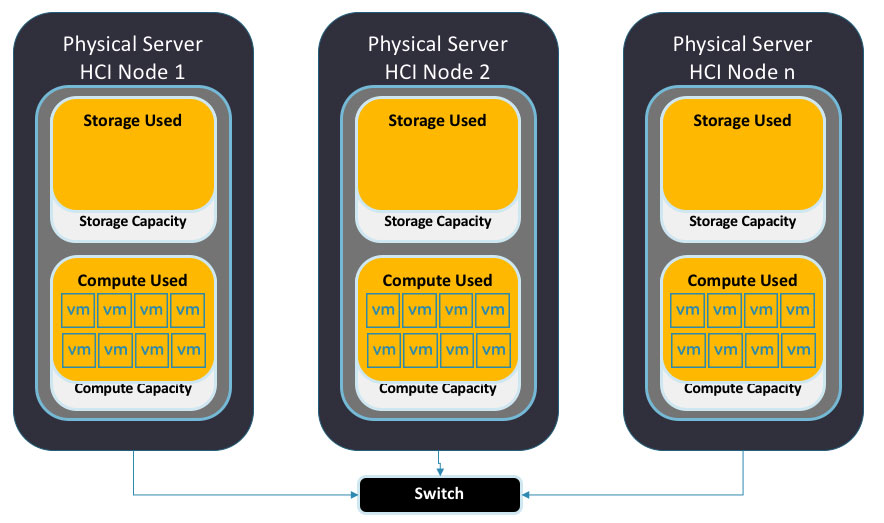 After HCI had a proven track record with VDI, HCI nodes started to be sold and deployed for general workloads. Unfortunately, general workloads are not as predictable as VDI workloads and compute and storage may not scale linearly with each other due to a variety of compute-intensive and storage-intensive workloads. You simply can’t decouple the storage and compute with HCI, as this leaves stranded, wasted resources. In some cases, companies rationalize expanding their inefficient HCI footprint just due to the ease of HCI IT administration. 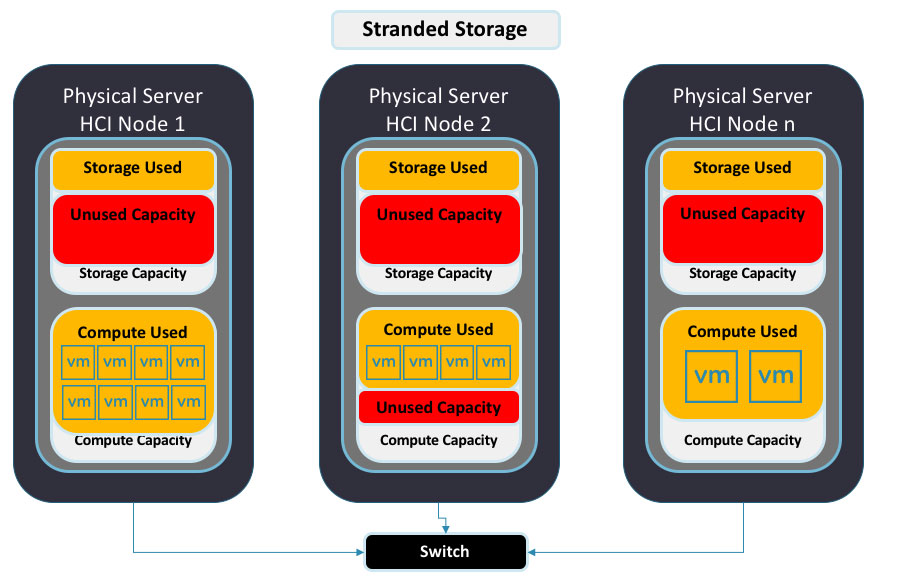 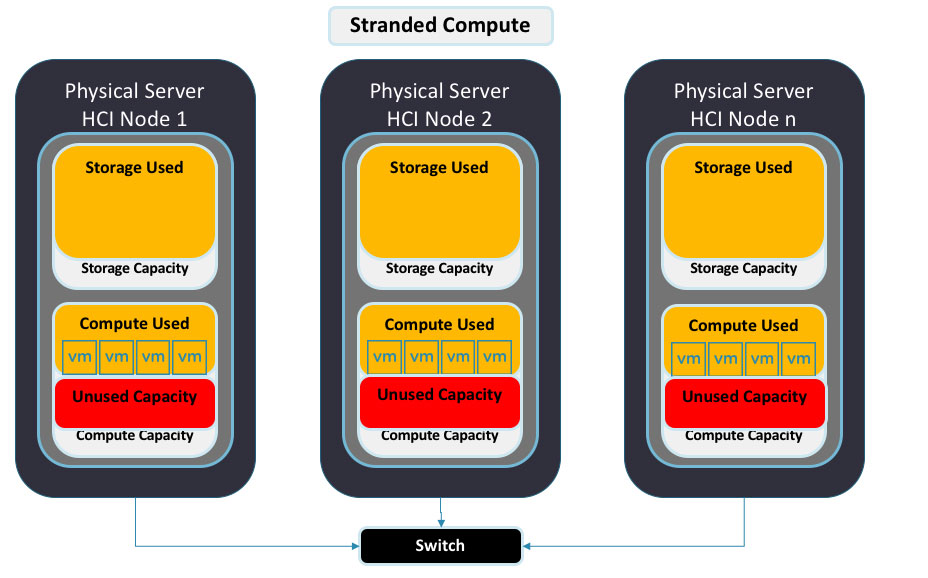 Even VDI workloads, the darling of HCI, are changing. The IT industry has recently seen a large-scale migration of employees who traditionally worked in offices now working from home (WFH). No longer do we see workers tasked with only one or two applications within VDI environments. We are now seeing power users who need virtual desktops with 4 or 8 vCPUs, 32GB of RAM, and GPUs, working remotely. Needless to say, general-purpose HCI nodes are not equipped to deal with these types of workloads efficiently.

In the last couple of years, many IT professionals concluded that they needed a way to expand storage and compute granularly, but still have a single management console. They needed to uncouple IT resources, and hence disaggregate HCI, or dHCI for short. From a logical presence, dHCI looks identical to HCI; but on the physical level, it has storage and compute nodes. Storage and compute power can be procured separately, and tied into each other via a high bandwidth network. 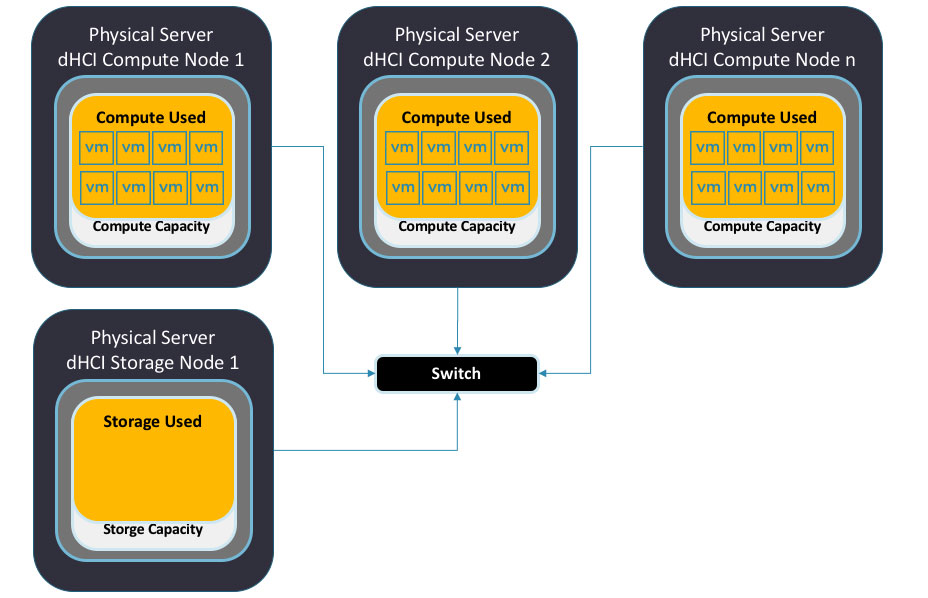 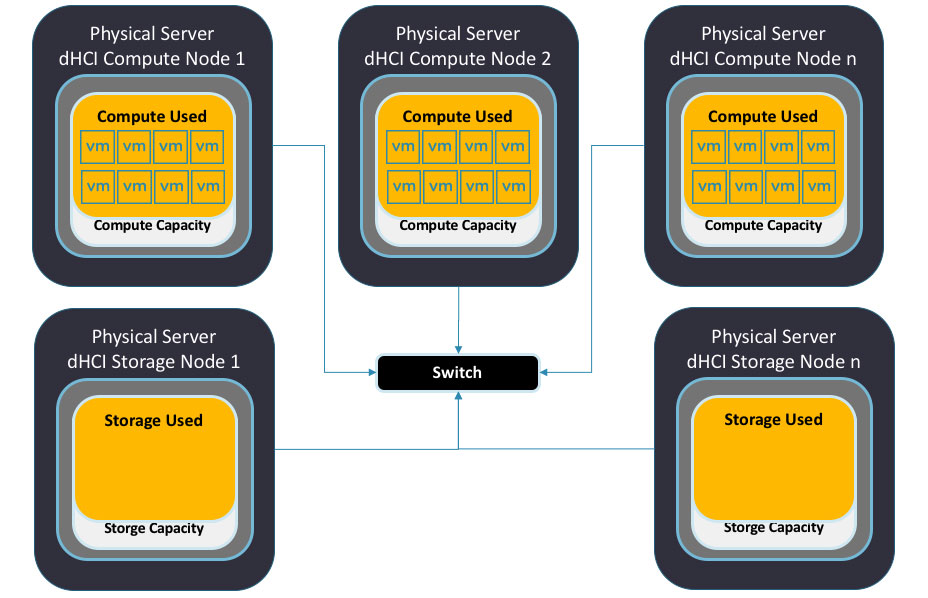 To get a better idea of how dHCI works, look at HPE’s dHCI architecture. HPE, one of the early innovators and trailblazers in dHCI, has a solution that uses HPE ProLiant servers for compute, HPE Nimble for storage, and VMware vSphere for the management plane.

HPE M-series Ethernet switches tie the hardware components together, and these switches are the secret ingredient in dHCI deployments. In the past, the amount and quality of the network traffic between compute and storage was a huge bottleneck. 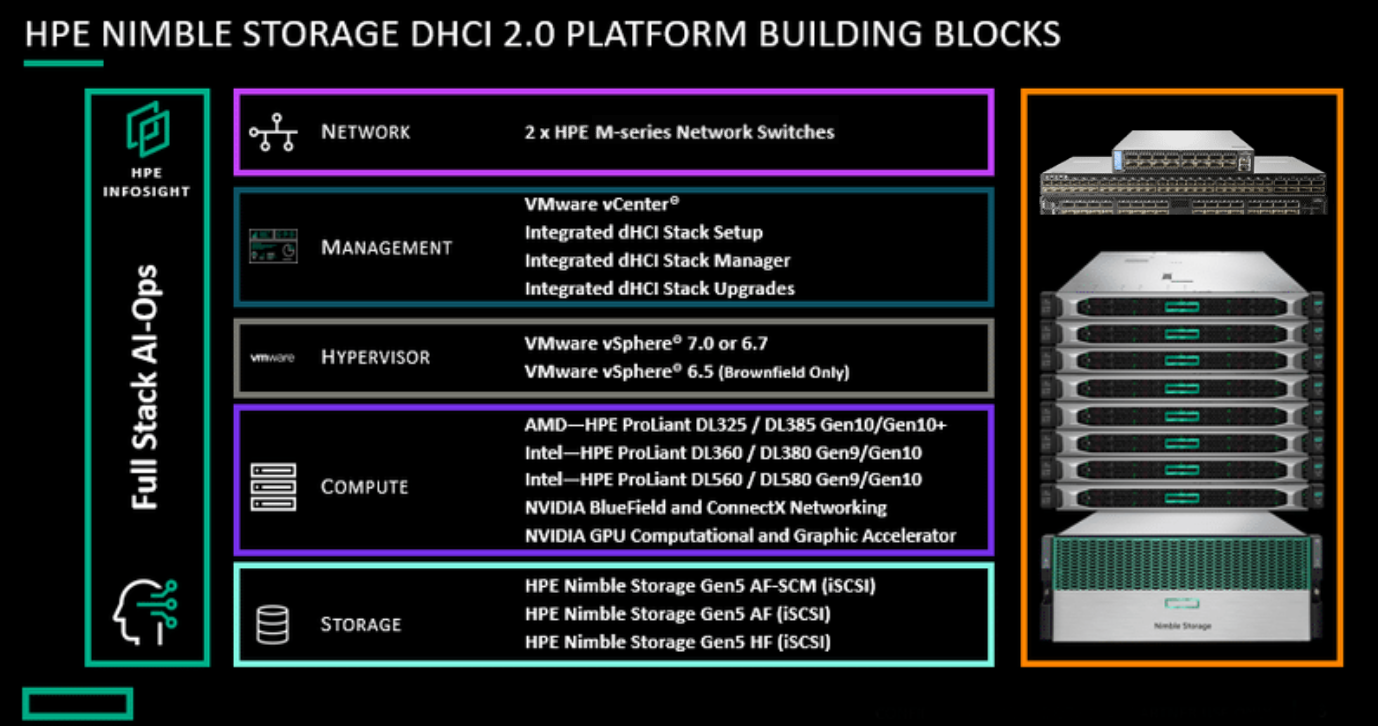 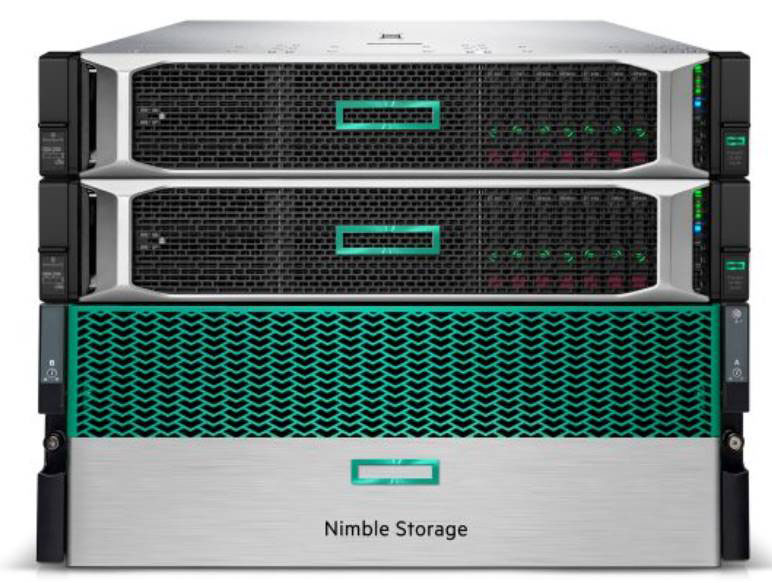 For compute in an HPE dHCI deployment, HPE uses its well-known and respected DL ProLiant servers. These servers come in a wide variety of configurations to meet the needs of an organization. On the one end of the gamut, they offer an HPE ProLiant DL325 Gen10 Server, which is a 1U, single socket, AMD EPYC powered system with 16GB of RAM. On the other end, they offer a 4U HPE ProLiant DL580 Gen10 server that supports up to four Intel Xeon procs, 16 TB of RAM and 16 PCIe 3.0 slots.

Less powerful servers in a dHCI deployment can be deployed to host a single application, while servers with huge amounts of resources can handle the most demanding applications such as  in-memory databases. Servers that have multiple GPUs can perform demanding analytic calculations. An HPE dHCI cluster can handle up to 32 compute nodes. The key point here is that it’s possible to get a server more customized for your specific workload, instead of selecting a server from a limited set of options as you would with HCI.

HPE Nimble Storage was an early entrant into the all-flash array market and an innovator in self-managed storage. When introduced to an HPE dHCI environment, Nimble Storage will be auto-discovered by VMware vCenter. VMware vSphere data storage services currently supported by Nimble Storage include VMware Virtual Volumes (VVols), which allows for policy-driven storage. It also consists of a “what-if” simulator that can help you see the effects of consolidating new applications on a dHCI cluster.

Nimble Storage has a latency as low as 200 microseconds, and automatic QoS to ensure critical applications get the resources they need. For data protection, the system can tolerate three simultaneous drive failures, and the array does not have a single point of failure. HPE Nimble Storage has up to 6-Nines of availability, or less than 32 seconds of downtime a year.

Arguably, the most critical component in a dHCI deployment is the network switch, which needs to handle a huge amount of traffic between storage and compute. Not only do switches need to address bandwidth requirements, but they must also do it with consistently low latency. To accomplish this, HPE offers M-series switches that are powered by the NVIDIA® Mellanox Spectrum™ Ethernet switch silicon.

HPE M-series Ethernet Switch family based on the Nvidia Spectrum ASIC has a wide variety of switches to choose from, ranging from 16 to 128 ports that support from 1Gb/s to 100Gb/s. These switches come in half- and full-width sizes.

One feature that makes these switches unique is their 300-nanosecond latency, one-third to one-half that of other vendor switches. Although these switches deliver outstanding performance for general network traffic, they really shine when passing block storage traffic, such as the iSCSI traffic, between Nimble Storage and ProLiant servers in a dHCI cluster. These switches’ outstanding performance is partly due to the 16MB and 42MB of flexible shared buffer within Spectrum and Spectrum-2, that allows for the best buffering and microburst absorption. Similarly, they support fast explicit congestion notification (ECN) and RDMA/RoCE to optimize storage data flows, which gives them a clear advantage over competing switches.

The HPE M-series SN2010M switch is available in a unique half-width form factor, allowing two units side-by-side that only take up 1U of rack space, leaving more room for storage and compute. Having two switches gives you full switch redundancy in 1U of space. The SN2010M packs a lot into its 1U half-width case, with 1Gbps to 100Gbs speeds, 18 SFP28 ports + 4 QSFP28 ports for an aggregate bandwidth of 1.7 Tbps.

Because the servers, switches, and storage are so interdependent, this can cause quite a bit of finger-pointing between vendors when trying to get to a root cause of a problem that can arise in a dHCI deployment. To deal with this issue, Nimble Support takes full ownership of support calls, regardless of the component. IT professionals know the importance of this level of service as it provides them with a central support organization with dedicated experts and more importantly, leads to a quicker problem resolution.

A problem with non-HCI systems is that it takes many different management consoles to monitor and manage them, leading to siloing, where different departments in an organization own and manage different components. On the contrary, with HPE dHCI, all the components can be managed via VMware vCenter Server, eliminating the silos that have plagued systems in the past.

To further the value that HPE brings to dHCI, InfoSight, a free web-based service that monitors the components in an HPE dHCI cluster, will proactively make recommendations to prevent issues before they interrupt an application’s performance.

dHCI allows companies to extract HCI benefits (ease of management and deployment), without the drawbacks (a limited and inflexible topology that requires storage to be deployed alongside compute). This inflexibility in HCI leaves expensive resources stranded and unused. dHCI is more than just throwing servers and  storage together with management software, to be effective the hardware and software must be engineered together in a holistic fashion and this is what HPE has done with their dHCI offering. HPE uses their highly configurable ProLiant servers for compute, Nimble Storage with its outstanding  data efficiency and ultra-low latency for storage and, perhaps most importantly, HPE M-series network switches to pass information between these two.

In the past, the ability to have IT resources disaggregated was hampered by the inability to handle the amount of bandwidth between storage and compute with the ultra low-latency required by applications. With HPE M-series network switches that are powered by NVIDIA Spectrum ASIC, this is no longer the case as they can handle the bandwidth in such a fashion that makes dHCI a much-needed reality in today’s modern data center. These switches when coupled with HPE servers and the power of all-flash storage supplied by HPE Nimble Storage make an extremely flexible solution that can be configured to meet a data centers hardware requirements without leaving expensive resources stranded and unused like a HCI deployment would. One of HCI’s main differentiators was unified management but HPE has removed this detractor to dHCI by creating the software needed to make the day-to-day operation of running a dHCI environment from a single management console a reality.

This report is sponsored by NVIDIA. All views and opinions expressed in this report are based on our unbiased view of the product(s) under consideration.