Micron has announced the availability of the Micron 7400 NVMe SSD, highlighted by its PCIe Gen4 interface and comprehensive security features. Available in a range of form factors, the Micron 7400 is ideal for demanding data center workloads and helping to drive the transition to next-generation server architectures.

Micron has announced the availability of the Micron 7400 NVMe SSD, highlighted by its PCIe Gen4 interface and comprehensive security features. Available in a range of form factors, the Micron 7400 is ideal for demanding data center workloads and helping to drive the transition to next-generation server architectures. 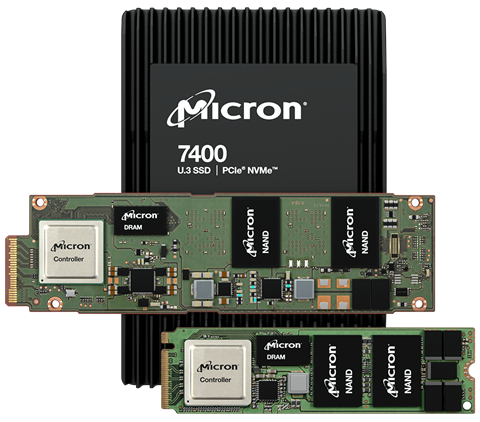 Data centers are always evolving due to the exponential growth of data and how many applications now demand high-performance storage solutions, such as SQL and NoSQL databases, block and object stores, VDI and server virtualization, and cloud storage. 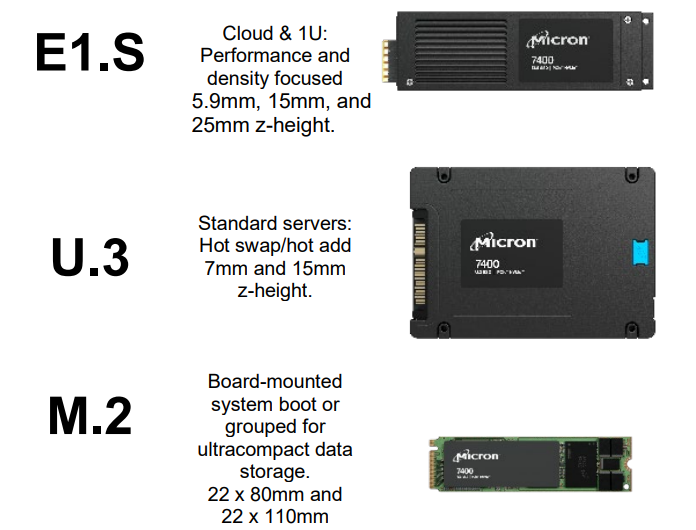 This is where the new Micron 7400 comes in, which is one of the broader enterprise SSD offerings we’ve seen. The line consists of several three drive types, which consist of different form-factor sizes and capacity models.

The most interesting option of the bunch is the new E1.S Enterprise and Data Center SSD Form Factor (EDSFF). We wrote a detailed article about how the E1.S ruler is finally going mainstream, and what it means to enterprises going forward. The new E1.S form factor (specifically the 15mm variant) will bring incredible performance numbers with its 25W+ capabilities when using the upcoming PCIe Gen5 SSDs. But for now, it means greater density, flash-optimized performance, and improved power and (integrated) cooling options. As a result, IT will be able to fit more SSDs in the same chassis while maintaining performance and temperature levels.

The Micron 7400 SSD offers a range of standards-based features, including TCG-Opal 2.01 and IEEE-1667, as well as new in-flight and at-rest data protection capabilities:

Micron indicates that the 7400 SSD line more than doubles IOPs per watt and throughput when compared to their previous generation. They are also backward compatibility with PCIe Gen3 systems, so customers who still use the last-gen interface can transition to Gen4 platforms when they are ready.

As for the specifics of their performance, all potential numbers vary quite a bit depending on the capacity and size model. The Micron 7400 line also comes in two different family types: PRO, which offers 1 DWPD (drive write per day; or MAX, which offers 3 DWPD. The MAX also excels in use cases where random write performance and endurance are vital.

Here is a rundown of the highest transfer rates you can expect them to reach:

The Micron 7400 supports 128 namespaces (i.e., isolated logical blocks of NAND that are separately accessible for noninterfering I/O and multitenancy), allowing it to increase scalability for virtualized environments such as hyperconverged infrastructure and software-defined storage. In comparison, the Micron 7300 supports just one. 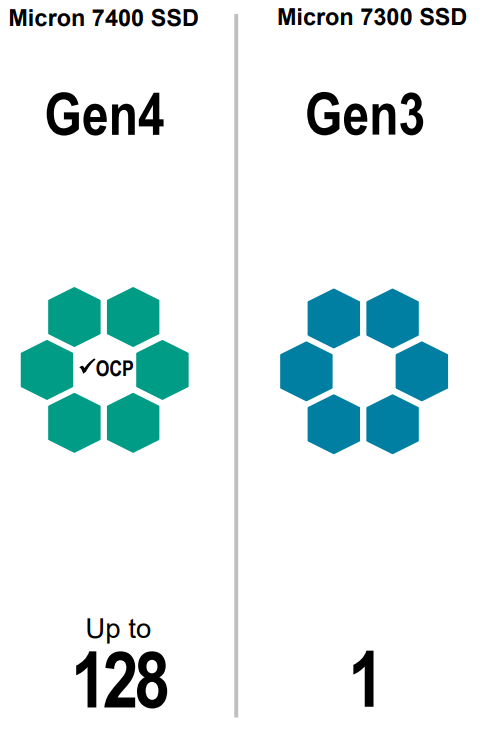 The Micron 7400 SSD is available now.