The ADATA Premier Pro SP920 2.5” SATA SSD is specifically designed to meet the needs of multimedia professionals looking for high-performance capabilities with large file transfers, such as massive videos files. Under the hood, it is equipped with the latest generation of the incomparable Marvell controller with the SATA III 6Gb/s specification. ADATA has indicated that their stringent selection of flash memory chips is said to enhance the overall system efficiency and speed, particularly with the transmission of multimedia files (or uncompressed data).

The ADATA Premier Pro SP920 2.5” SATA SSD is specifically designed to meet the needs of multimedia professionals looking for high-performance capabilities with large file transfers, such as massive videos files. Under the hood, it is equipped with the latest generation of the incomparable Marvell controller with the SATA III 6Gb/s specification. ADATA has indicated that their stringent selection of flash memory chips is said to enhance the overall system efficiency and speed, particularly with the transmission of multimedia files (or uncompressed data). 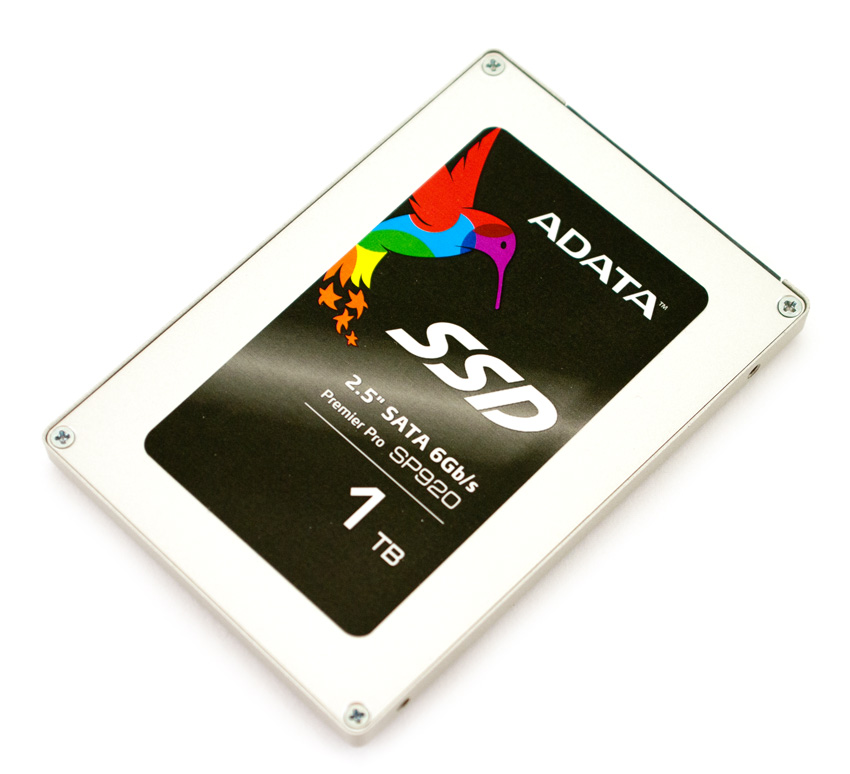 ADATA's Premier Pro SP920 SSD is identical to the Crucial/Micron M550 in pretty much every way and it's likely that Micron manufactures the drives themselves. As such, ADATA claims that it can reach identical performance numbers to the M550 (and then some), quoting 4KB random read/write speeds of up to 98,000/88,000IOPS as well as boasting 560MB/s read and 500MB/s write activity to offer rapid loading and multimedia playback. With these similarities, as well as the market’s saturation of high-performance SSDs, it will be interesting to see how these claims hold up and whether or not it provides a balance of price and performance like many other SSDs currently do. 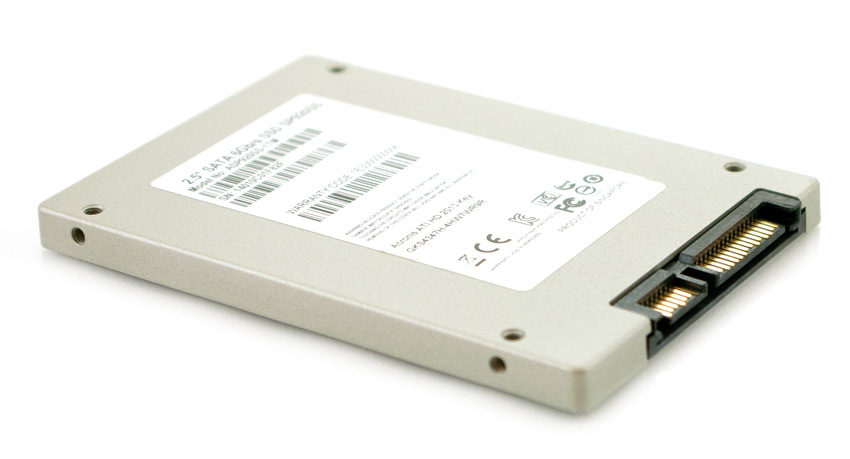 Its enclosure consists of a smooth, yet durable, refined metal, which allows it to be finger-print proof. The front of the drive features a sticker that labels the drive with ADATA logo, product name, capacity, and performance information. 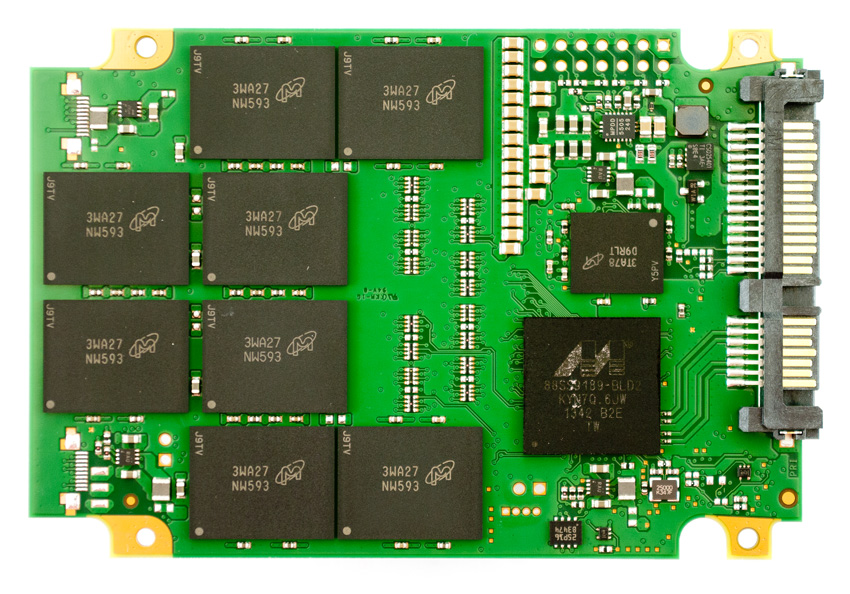 The side profile of the SP920 show the screw holes that enabling the drive to be mounted. Though the 9.5mm form factor is still more widely used, the SP920 has the much slimmer 7mm profile, allowing it to fit in Ultrabooks or in most any other application. The corners are slightly rounded out with standard SATA power and data connectors located on the front of the drive. 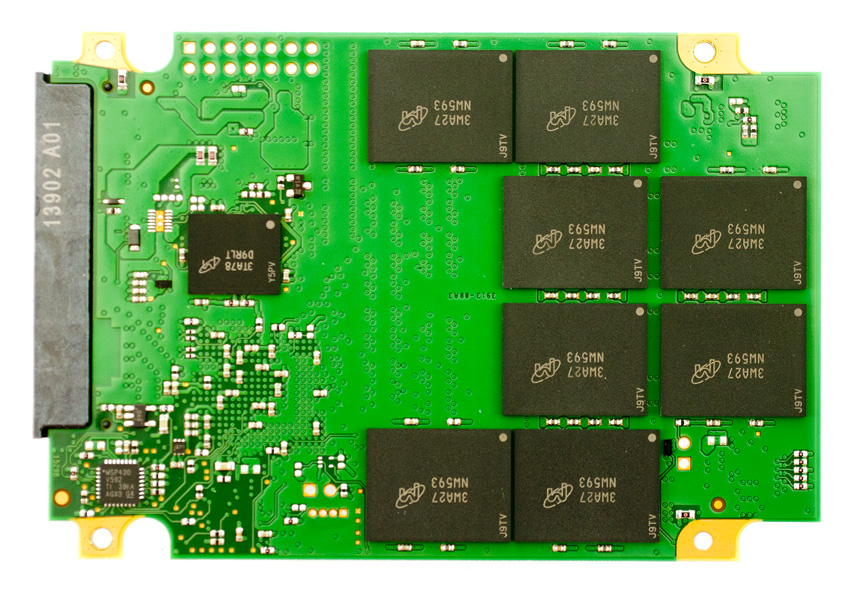 Our first test measures 2MB sequential performance. The SP920 was measured read and write speeds of 459.7MB/s and 435.8MB/s write respectively, ranking last place overall. The top performer in the read column was the OCZ Vector 150 240GB while the write column's winner was the Samsung SSD Evo 250GB. The M550 ranked in the middle of the board, with a read and write score of 459.7MB/s and 435.8MB/s.

Looking at 2MB random transfer performance, the SP920 256GB posted 454.3MB/s read and 434.8MB/s write ranking at the lower end of the pack. The M550 posted very respectable read and write scores of 480.5MB/s and 472.7MB/s. Though the Samsung SSD Evo 250GB was the top performer for read activity at 492.9MB/s, its write performance was significantly lower than rest with at 240.0MB/s.

Moving to the smaller 4K random transfers category, the SP920 clocked in at 6,865IOPS read activity and 19,951IOPS write activity. The M550 actually posted over 2,000IOPS less in the write column.

Comparing 4K latency, the SP920 performed well in the average latency column but was among the highest for peak latency. 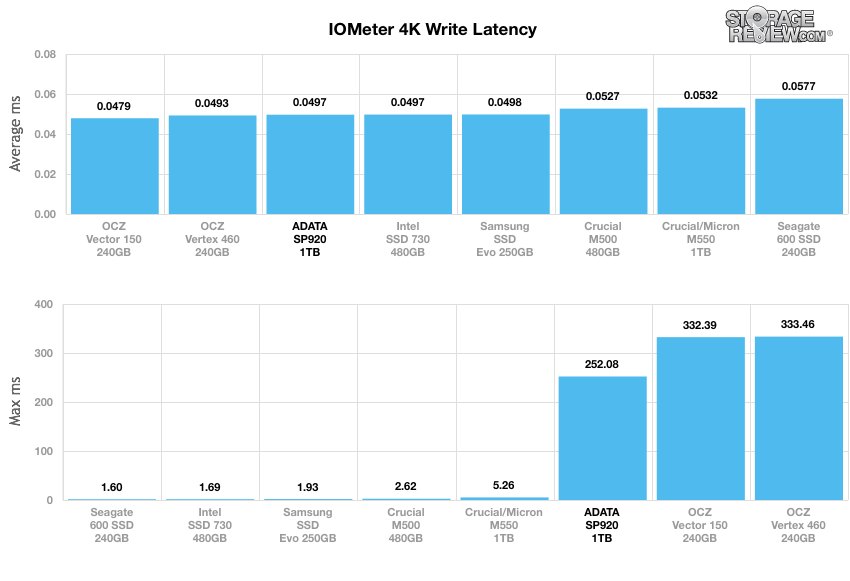 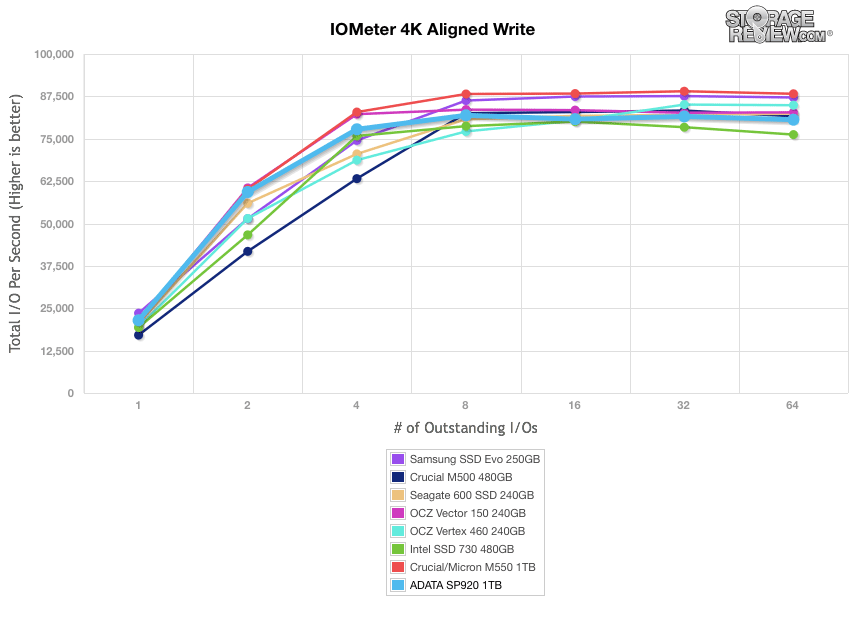 In the 4K aligned read category, the ADATA drive moved towards the middle of the pack, scoring respectable max IOPS of 92,770 though it still fell well short of the identical M550. 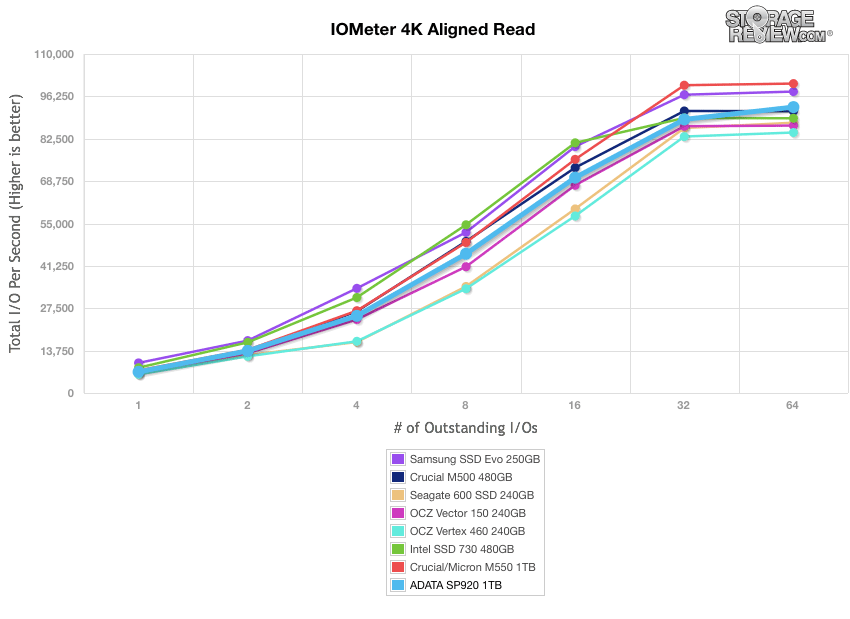 Our last series of synthetic benchmarks compare the hard drives in a series of server mixed-workloads with a queue depth of ranging from 1 to 128. Each of our server profile tests has a strong preference towards read activity, ranging from 67% read with our database profile to 100% read in our web server profile. In all of our mixed workloads, the SP920 SSD ranked near the middle and end of the pack.

The first is our database profile; with a 67% read and 33% write workload mix primarily centered on 8K transfer sizes. For this benchmark, the SP920 posted a Q128 result of 39,149IOPS ranking in the middle once again. 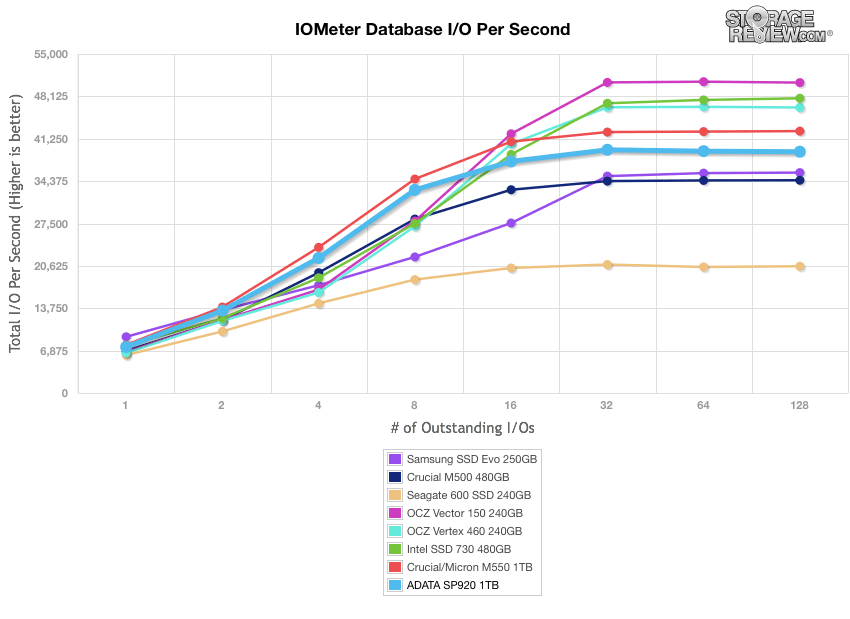 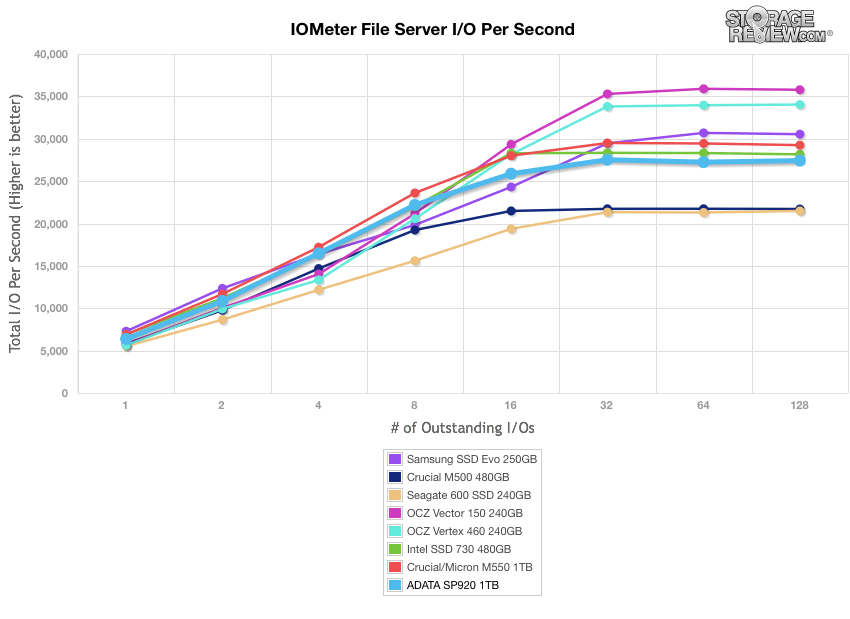 The web server profile is read-only and uses a spread of transfer sizes from 512-byte to 512KB. The SP920 SSD performed near the bottom of the pack in this category, boasting 23,062IOPS by the Q128 mark, very similar to the M550. 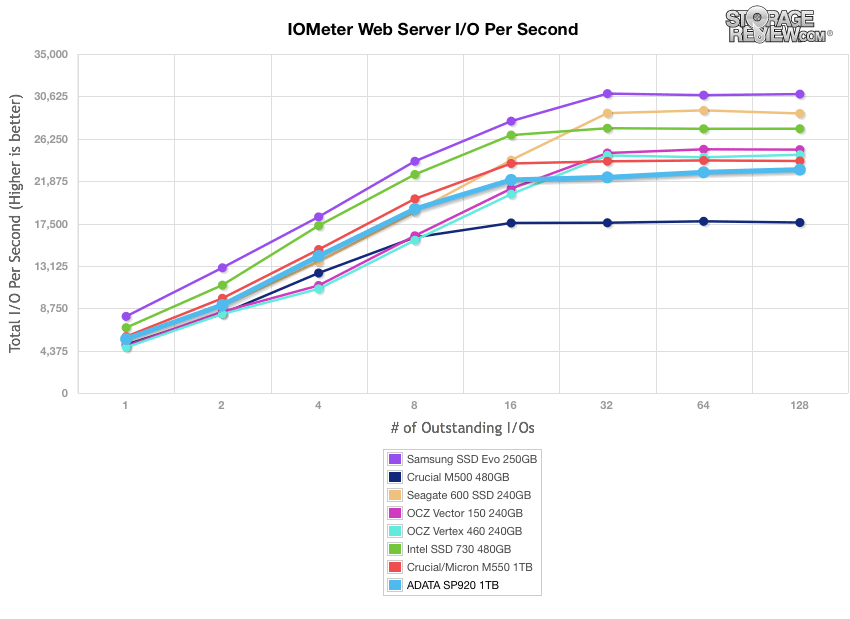 The last profile looks at workstation activity, with a 20% write and 80% read mixture using 8K transfers. By Q128, the SP920 boasted 42,109IOPS, which was among the middle echelon of its comparables. 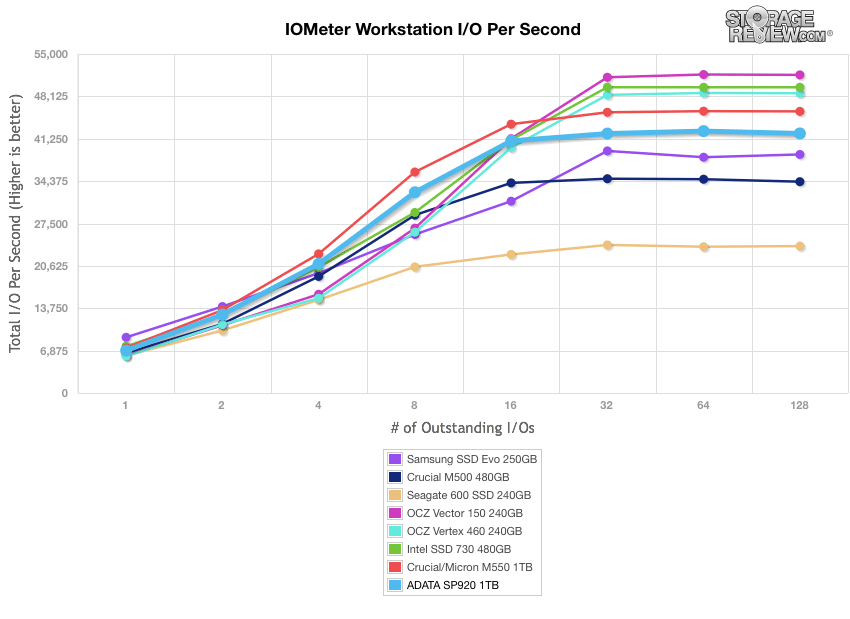 The first real-life test is our HTPC scenario, which includes: playing one 720P HD movie in Media Player Classic, one 480P SD movie playing in VLC, three movies downloading simultaneously through iTunes, and one 1080i HDTV stream being recorded through Windows Media Center over a 15 minute period. Higher IOps and MB/s rates with lower latency times are preferred.

In this profile, the SP920 ranked at the bottom of pack in all of the categories alongside the Crucial M500 with a transfer speed of 240.4MB/s, an IOPS of 5,184, and an average latency of 1.52ms. The M550 outperformed the SP920 here as well. Additionally, and as expected, the OCZ Vector had no trouble beating out all of the comparables. 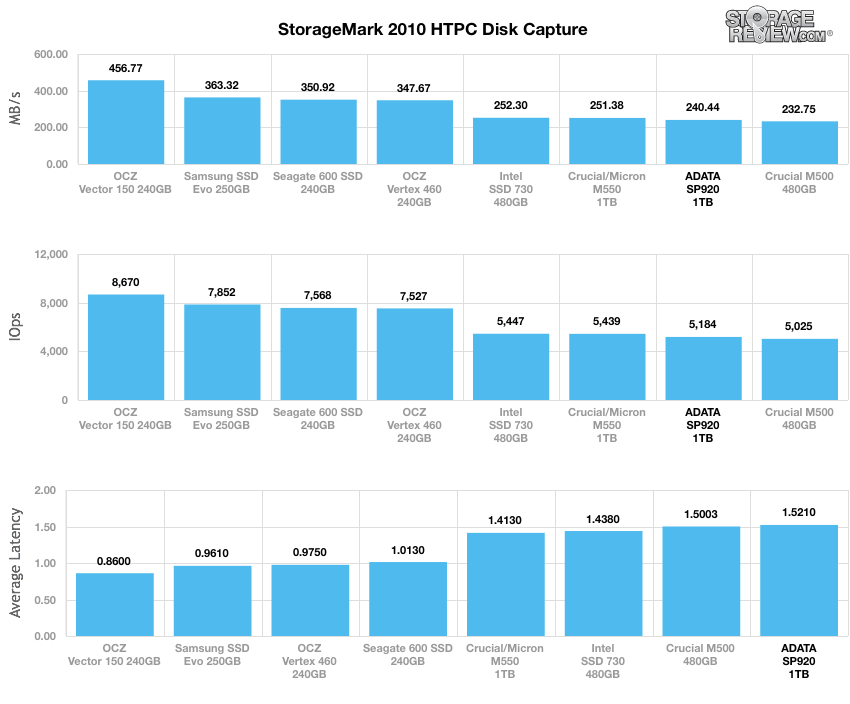 In our Productivity trace, the SP920 posted disappointing numbers–showing an IOPS of only 4,572 as well 133.9MB/s–just behind the M550. 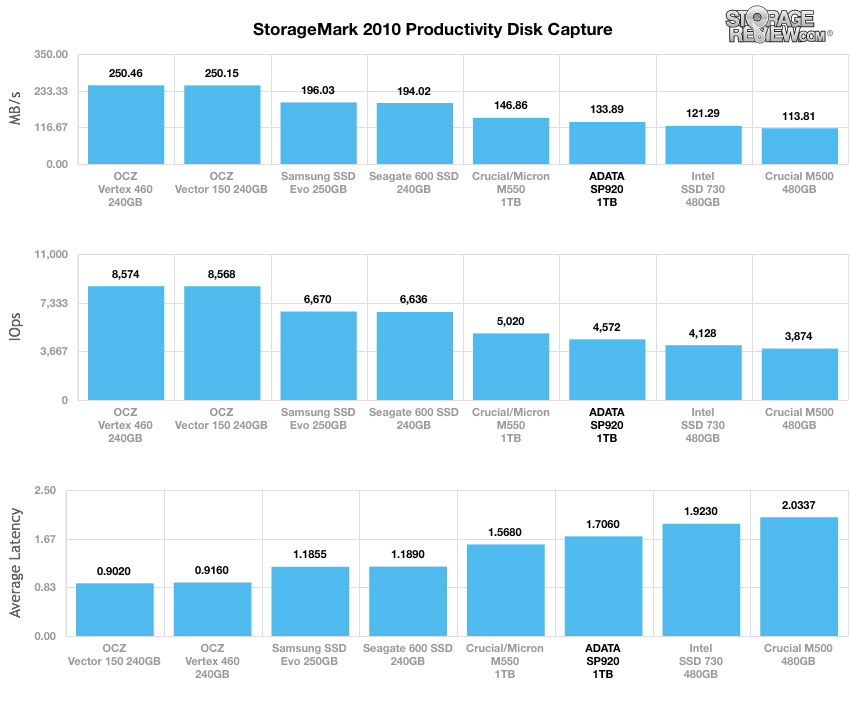 In our read-intensive Gaming trace, the SP920 posted results in the lower middle/bottom of the pack with an IOPS of 8170, an average latency of 0.93ms, and speed of 431MB/s. Its brethren, the M550, was the top performer here. 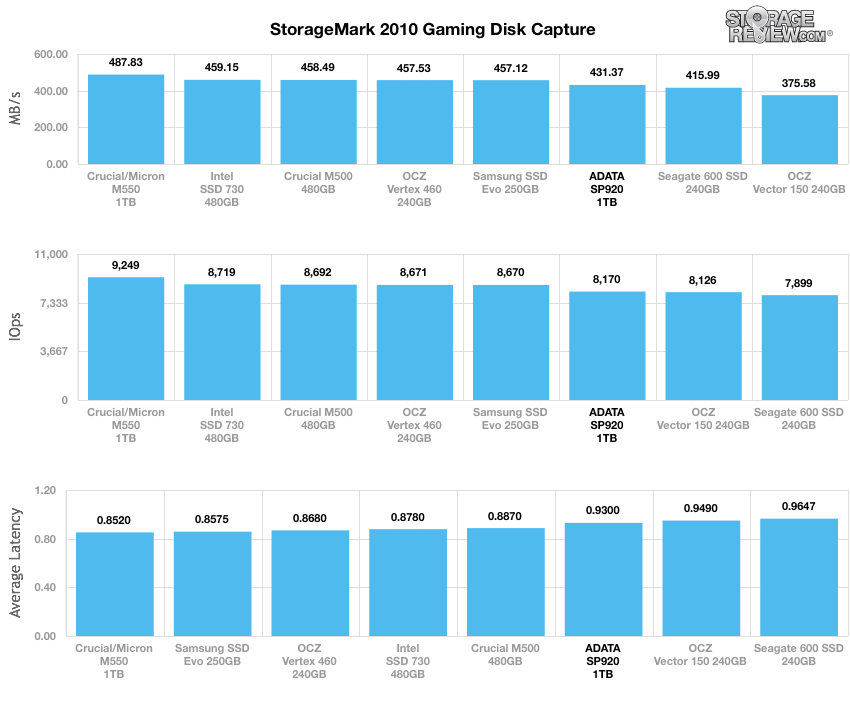 Low idle power consumption, as well as their overall  power management, is something that is important to many consumers as they spend much of their life-cycle in an idle state.

During our power tests, we recorded idle power consumption thr SP920 at 1.04W. During sequential write and read activity the drive scored 4.30W and 2.66W respectively.

ADATA claims that their Premier Pro SP920 2.5” SATA SSD is designed specifically for multimedia professionals looking for high-performance capabilities with large file transfers and is equipped with SATA 6Gb/s, 20nm NAND, and a new gen Marvell controller under the hood. Additionally, the SP920 is available in 128GB, 256GB, 512GB, and 1TB capacities.

When measuring the SP920 by its performance, it was a bit dissapointing to see that the ADATA SSD posted results below par in many of our tests and usually towards the bottom of the pack, despite its decent hardware. In our real-world workloads, it ranked in the lower part of the leaderboard in all of the categories, especially in our productivity trace. When measuring it's performance in single workloads, the SP920 placed a little bit better ranking in the middle, which remained in that way during our 4K tests. During our mixed workload performance benchmarks, the SP920 also ranked in the middle echelon of our rankings. As mentioned above, the SP920 is virtually the same as the Micron/Crucial M550 in specifications to the point that it's likely that Micron is actually making the drives for them. That said, it's odd to see ADATA's iteration of the SSD perform, on average, 10 percent lower than it's brethren; sometimes it's even substantially lower. ADATA has suggested that this is a value play; however, its pricing is identical to the superior performing M550 for the 1TB model (the 128GB model is $10 less than Micron's). This isn't suprising since Micron (as well as Samsung) own their fabrication plants, which gives them every pricing advantage over ADATA. Unless ADATA drives down price or increases performance levels to that of the M550, it's tough to recommend over its counterpart. On the other hand if pricing drops on the SP920, it becomes an attractive alternative to the Micron/Crucial M550.

With hardware under the hood shared with the Micron/Crucial M550, the ADATA Premier Pro SP920 comes into the market as a known quantity, although the performance dipped compared to same capacity M550.

How To Lower Virtualized Data Center Expense With USB Flash