ADATA recently added to their 3D NAND SSD line with the SU900, a larger capacity option (2TB) that also includes performance improvements. Other than the newly added high speed SMI controller and the aforementioned changes, the SU900 is almost identical to its predecessor (the ADATA SU800 SSD). That said, the SU900 is being marketed as a good option for casual users looking to upgrade the storage of their ultrabooks, notebooks, or game consoles.

ADATA recently added to their 3D NAND SSD line with the SU900, a larger capacity option (2TB) that also includes performance improvements. Other than the newly added high speed SMI controller and the aforementioned changes, the SU900 is almost identical to its predecessor (the ADATA SU800 SSD). That said, the SU900 is being marketed as a good option for casual users looking to upgrade the storage of their ultrabooks, notebooks, or game consoles. 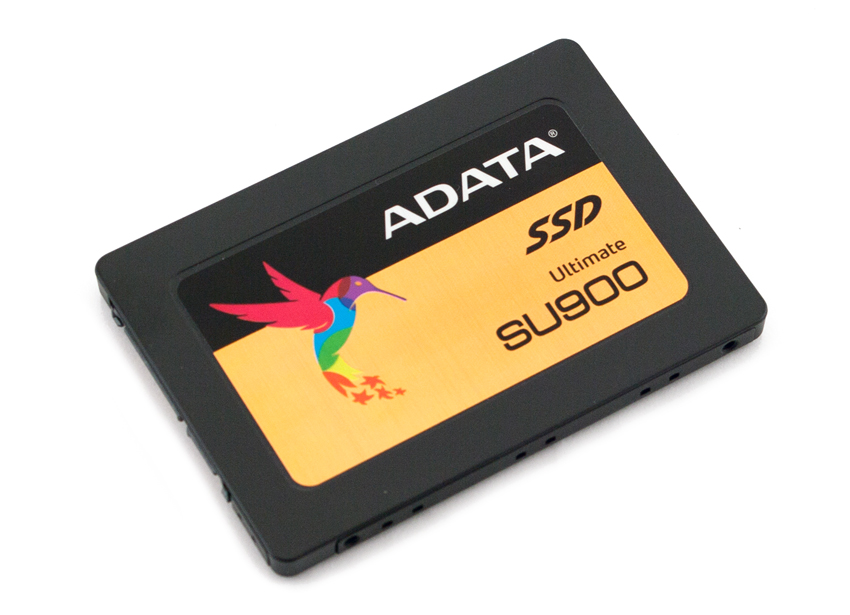 ADATA reports sequential transfer speeds of 560MB/s read and 525MB/s write, which is certainly in the ballpark for their intended users in terms of performance. The SU900 also comes with strong endurance and MTBF ratings (not to mention a 5-year warranty), which is probably even more important than performance with this class of SSD; users in the market for a mid-level notebook upgrade are less likely to nitpick about performance and more likely to choose an option that will last. The SU900 also comes with various data protection features (e.g., software/hardware write protection, early weak block retirement) that work to prevent drive failure and extend the life of the SSD during use.

The ADATA SU900 has the same look and feel as the SU800, except that it has a yellow sticker instead of blue. The card comes in a black case with additional information on the back (i.e., model number, warranty code). 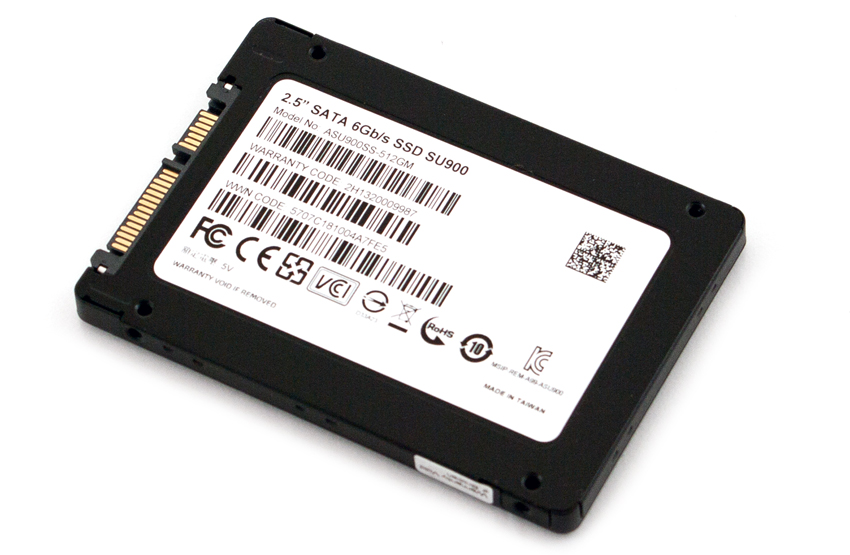 Popping off the cover revels the short PCB inside. The top side has four NAND packs covered by an ADATA sticker. 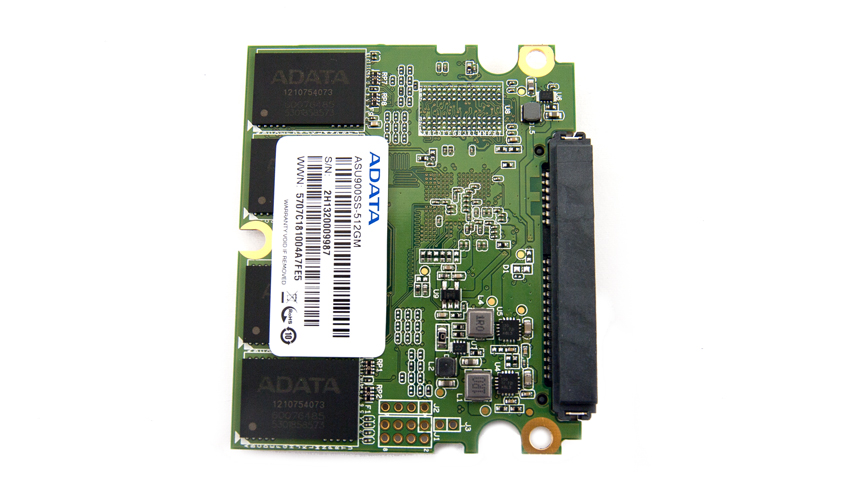 The other side of the PCB has four more NAND packs the DRAM and an SMI controller. 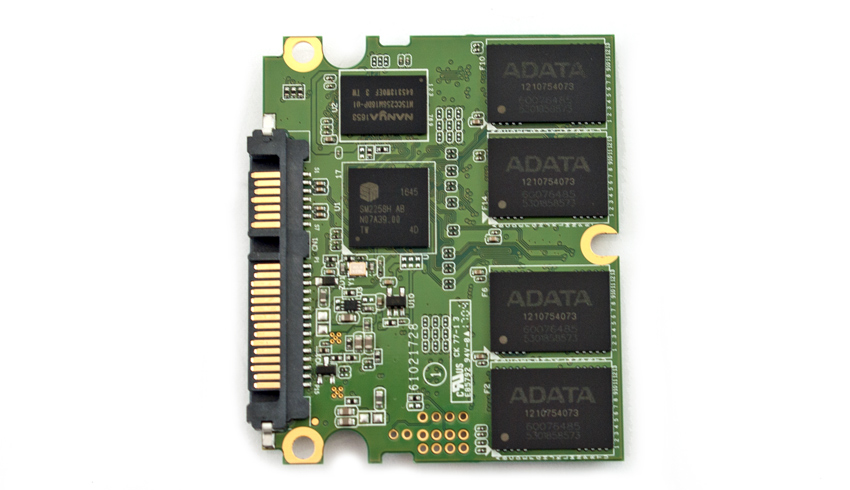 All consumer SSD benchmarks are conducted using the StorageReview HP Z640 Workstation. We compared the ADATA SU900 SSD to the following drives:

In our 2MB sequential benchmark, the ADATA SU900 outperformed every other SSD in both read and write, posting 521.6MB/s and 472.6MB/s, respectively.

Although the ADATA SU900 fell behind somewhat in terms of read transfer speeds, it remained the top-performing drive in terms of 2MB random write with 473.38MB/s.

The purpose of our random 4k benchmark is to put more strain on the drives in terms of throughput. Under these conditions, the ADATA SU900 lagged behind the other drives, only posting 28.3MB/s and 106.0MB/s in read and write, respectively. This puts the SU900 behind all but one SSD (OCZ VX500 with 19.5MB/s and 102.4MB/s, respectively) for this benchmark.

We found the same standings in terms of I/O per second, with the ADATA SU900 posting 7,251IOPS and 27,131IOPS in read and write, respectively.

The ADATA SU900 was expectedly slow relative to the other drives in our 4k write latency benchmark, yielding an average latency of 0.367ms. The lowest average latency in this test was from the Crucial MX200 (1TB), which posted 0.0329ms. The ADATA SU900 was the weakest drive tested in terms of max latency (18.64ms), almost doubling the latency of its closest competitor (Samsung 850 Pro (2TB) with 10.07ms). For comparison, the top performer (the Samsung 850 Pro (1TB)) posted a max latency of 0.18ms. 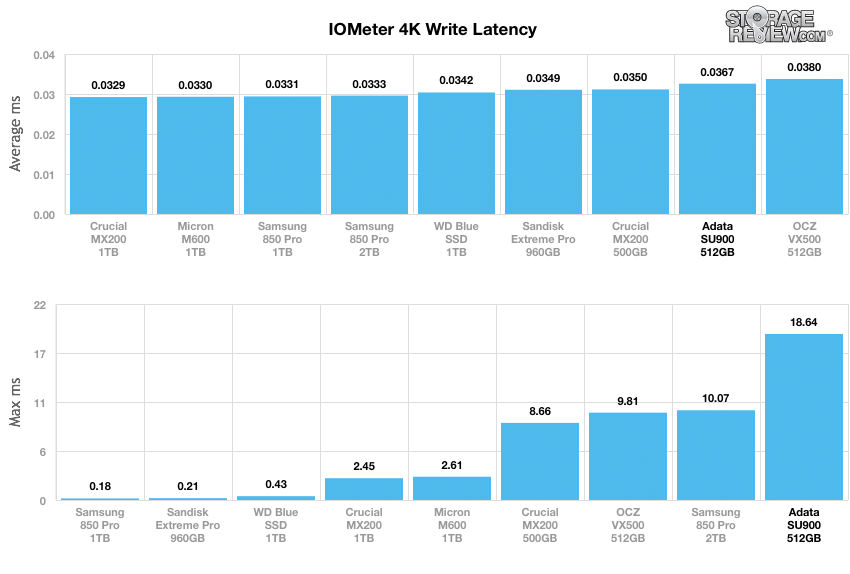 For our next 4K test, we move to a workload with 100% write activity, which scales from 1QD to 64QD. The ADATA SU900 performed fairly well in the aligned write portion of this test, although there were several SSDs that yielded stronger results. The SU900 outperformed the WD Blue (1TB) and the OCZ VX500 (512GB). 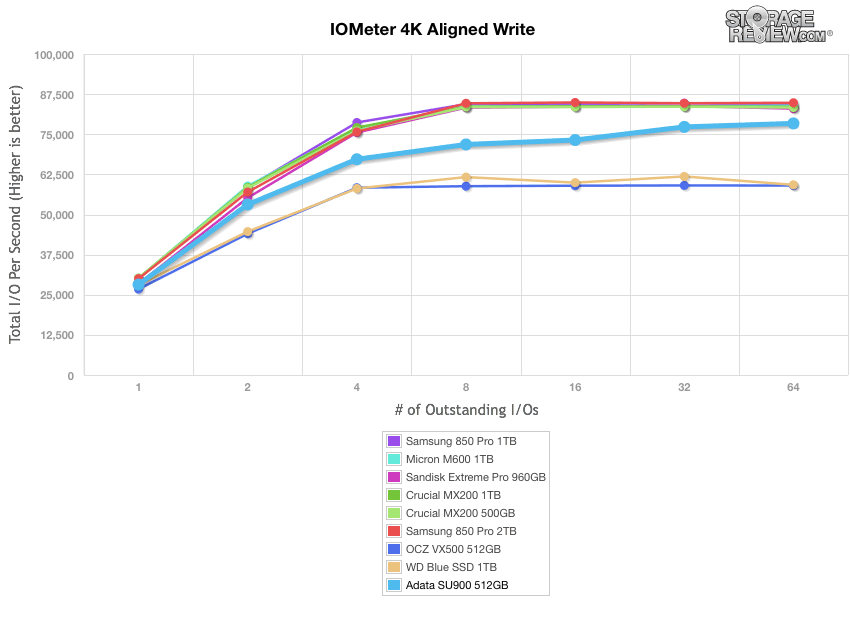 We saw a drop in performance for the ADATA SU900 when we switched to the aligned read portion of this benchmark, which put it in last place overall. The OCZ VX500 started out with fewer IOPS than the SU900, but by the end of the test the SU900 dropped to the bottom of the pack. 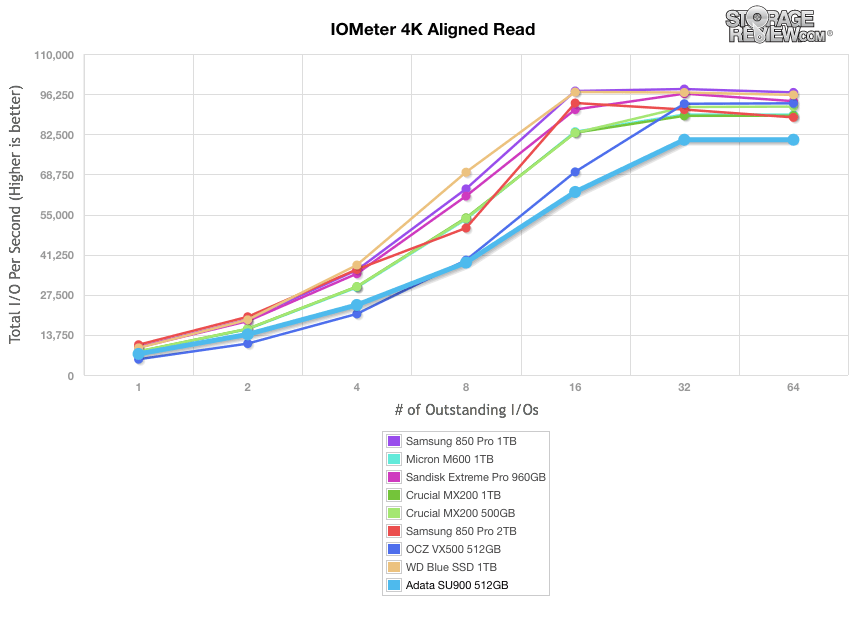 The database profile features a 67% read and 33% write workload, focusing on transfers around 8K in size. Although the ADATA SU900 was neck and neck with the Sandisk Extreme Pro for most of the database profile, by the end of the test the SU900 fell to the bottom of the pack. 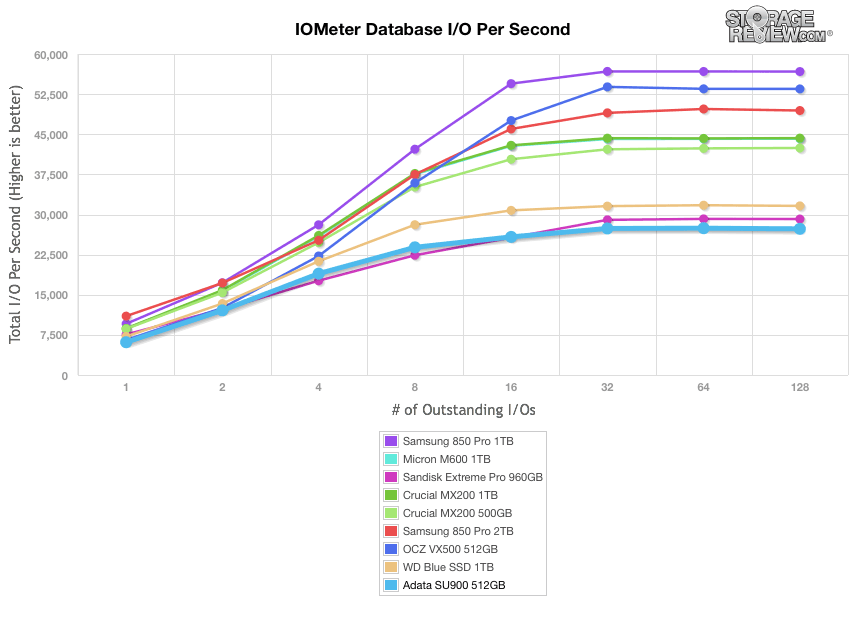 Our next benchmark is the read-only web-server profile, which uses transfer sizes ranging from 512 bytes to 512KB. In this installment of our consumer-synthetic benchmarks, the ADATA SU900 remained well-established as the weakest drive through the duration of the test. The SU900’s closest competitor was the WD Blue SSD. 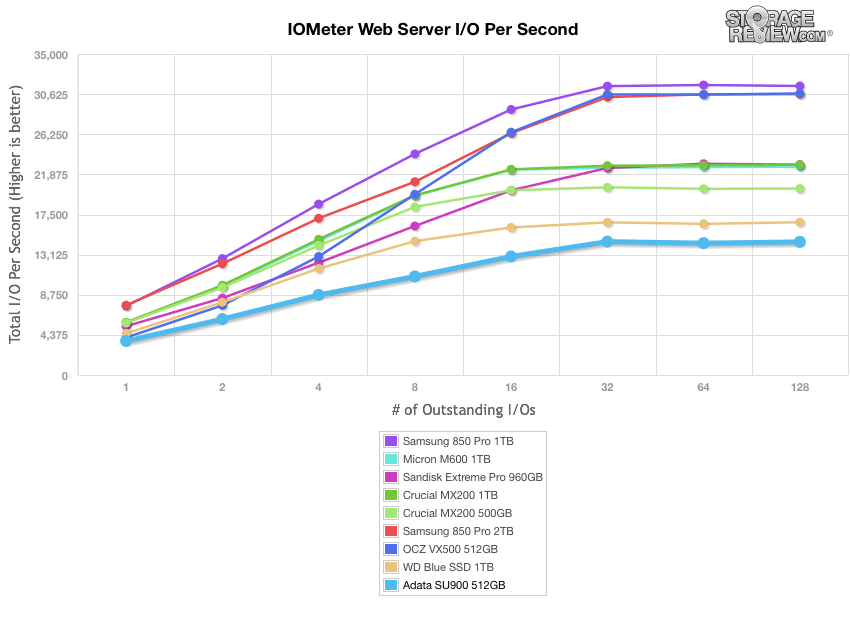 Our file-server profile has 80% read and 20% write workload and is spread out over multiple transfer sizes ranging from 512-bytes to 64KB. Although it started out as one of the weaker SSDs, the ADATA SU900 finished out this test as one of the top drives, trailing behind only two others (the OCZ VX500 and the Samsung 850 Pro (2TB)). 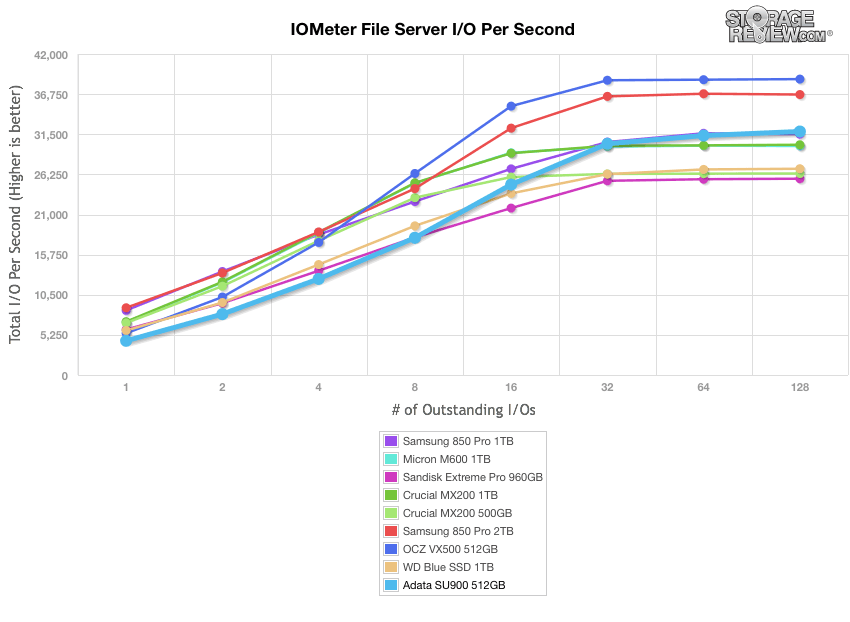 The last profile looks at workstation activity; with a 20% write and 80% read mixture using 8K transfers. The ADATA SU900 reclaimed its standing as the weakest SSD in the final consumer-synthetic benchmark, with an unusual performance trajectory that reflects its strained performance. 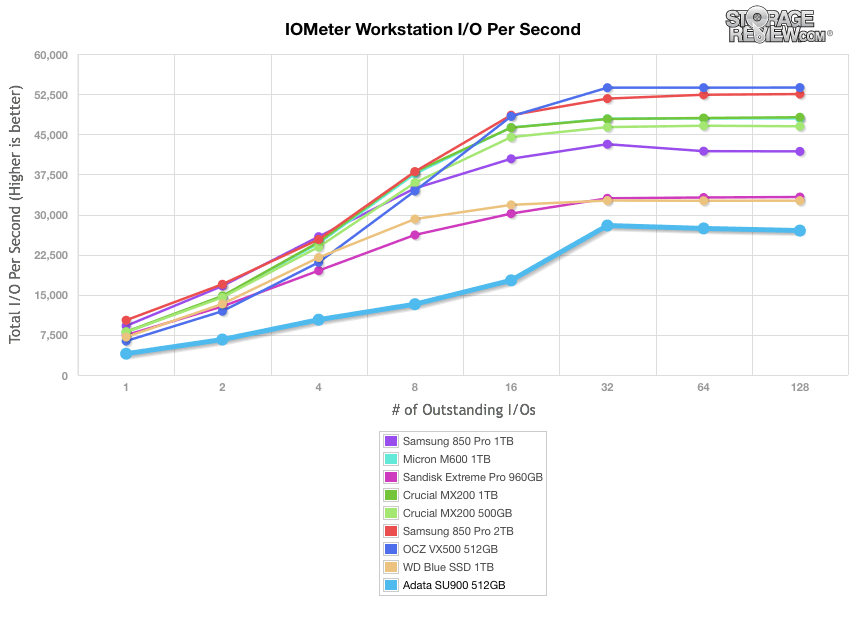 While the results of synthetic benchmarks are important in identifying the key strengths and weaknesses of a drive, performance in these tests does not always translate directly into real-world situations. To get a better idea how the ADATA SU900 SSD will handle itself in the field, we will chart StorageMark 2010 HTPC, Productivity, and Gaming traces against comparable drives. Higher IOPS and MB/s rates with lower latency times are preferred. 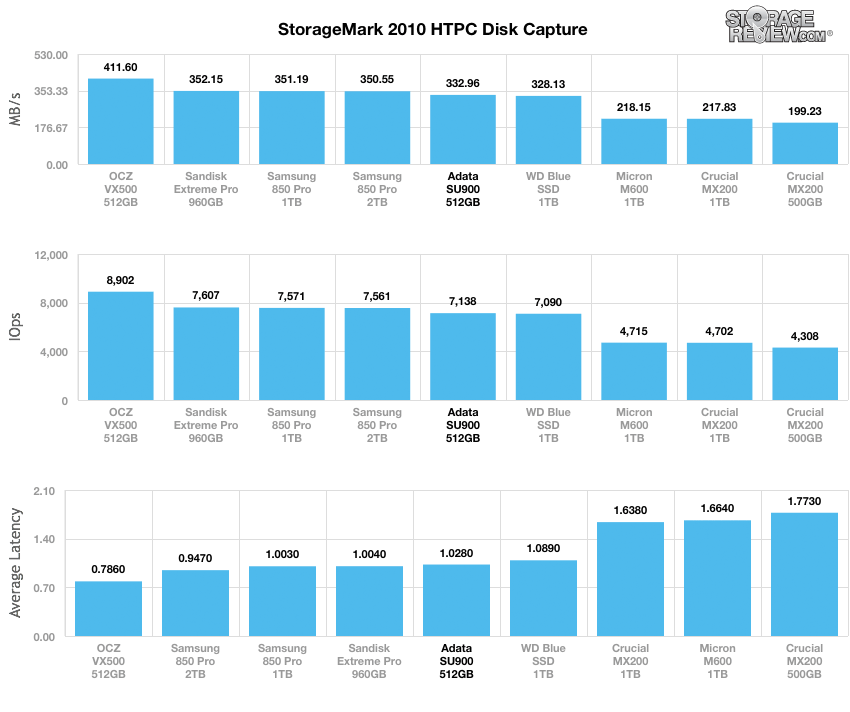 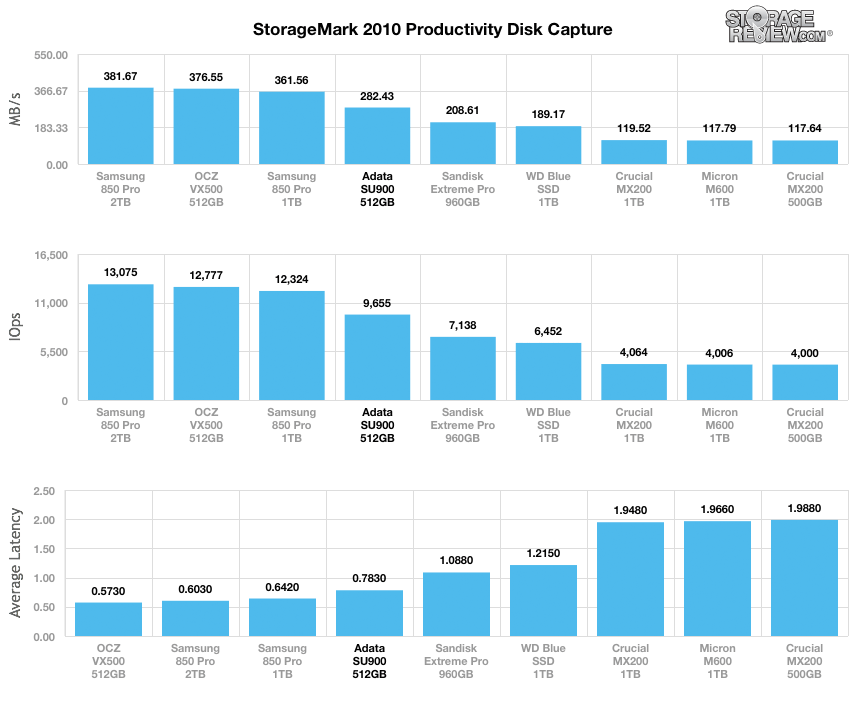 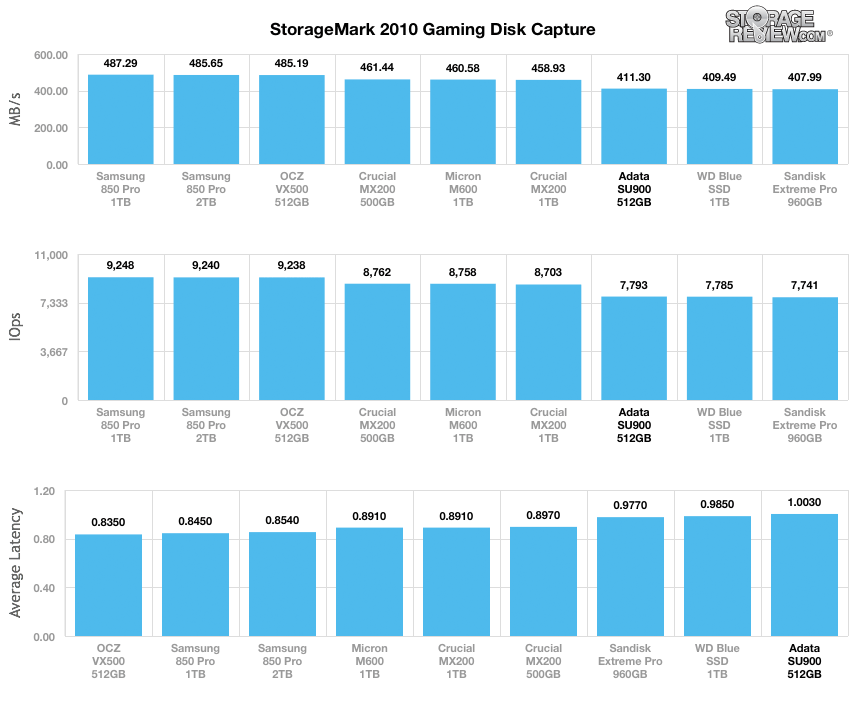 The SU900 provides up to 2TB of storage leveraging 3D MLC NAND. Aside from the capacity upgrade, ADATA also stated better performance for their new drive to make it an attractive upgrade option for notebooks. The drive starts as low as $100 for the smaller capacity model and offers several data protection features such as software/hardware write protection and early weak block retirement.

Looking at performance the drive turned in a mixed performance. The SU900 really shined in the 2MB IOMeter where it had the best sequential read and write scores of 521.55MB/s and 472.59MB/s, respectively and the best random write performance of 473.38MB/s. Its 4K IOMeter test put it right in the average scores in throughput and near the bottom of the pack in latency. Our consumer real-world benchmarks saw the SU900 coming in the middle to near the end of the pack with it having the highest latency in our gaming capture. For the value-based market though, these numbers are generally respectable.

The ADATA SU900 SSD offers up to 2TB of storage and is perfect for notebook drive replacement, especially for users who prioritize price and reliability over performance.