ADATA has entered the M.2, NVMe market with the release of the XPG SX8000. With their tiny physical footprint coupled with impactful performance, M.2 drives have become immensely popular over the past few years, offering a ton of flexibility and power. The XPG SX8000 is a mid-range M.2 SSD that supports the PCIe Gen3x4 interface and one is one of the first drives to feature the Silicon Motion SM2260 controller. The SM2260 is designed mainly for client and entry-level enterprise SSDs (in this case, however, a high-end consumer SSD) and features four 8Gbps lanes of simultaneous data flow combined with eight NAND channels.

ADATA has entered the M.2, NVMe market with the release of the XPG SX8000. With their tiny physical footprint coupled with impactful performance, M.2 drives have become immensely popular over the past few years, offering a ton of flexibility and power. The XPG SX8000 is a mid-range M.2 SSD that supports the PCIe Gen3x4 interface and one is one of the first drives to feature the Silicon Motion SM2260 controller. The SM2260 is designed mainly for client and entry-level enterprise SSDs (in this case, however, a high-end consumer SSD) and features four 8Gbps lanes of simultaneous data flow combined with eight NAND channels.

ADATA’s SSD leverages 3D NAND Flash for higher storage density and more reliability, and SLC Caching, DRAM Cache Buffer and LDPC ECC technologies for high-end performance and data integrity during resource-intensive applications. Though this level of performance comes at a cost, the XPG family is ADATA’s ‘premium’ line and targets the prosumer demographic and those looking for a major upgrade to their gaming notebooks or high-end desktops.

Because the new SX8000 uses the PCIe Gen3x4 interface, it isn’t hindered by the restrictions of the older SATA III technology, allowing for a huge boost in performance. To this end, ADATA quotes their new M.2 drive to reach read and write speeds up to 2,500MB/s and 1,100MB MB/s, respectively. It should be noted that there is a significant drop in performance with the 128GB model, as ADATA indicates sequential read and write performance that is half what the higher capacity drives are expected to hit. The XPG SX8000 also offers an earnest MTBF rating of 2,000,000 hours.

Like all M.2 form factor drives, the SX8000 PCIe SSD is about the size of a stick of RAM, making it an extremely versatile SSD. The front side of the drive is home to the SMI controller, DRAM, and NAND packs. These are partly covered by an sticker, which displays product branding and other information. On the left is the slick looking silver heat sink, which is a feature added to the newer version of this drive. 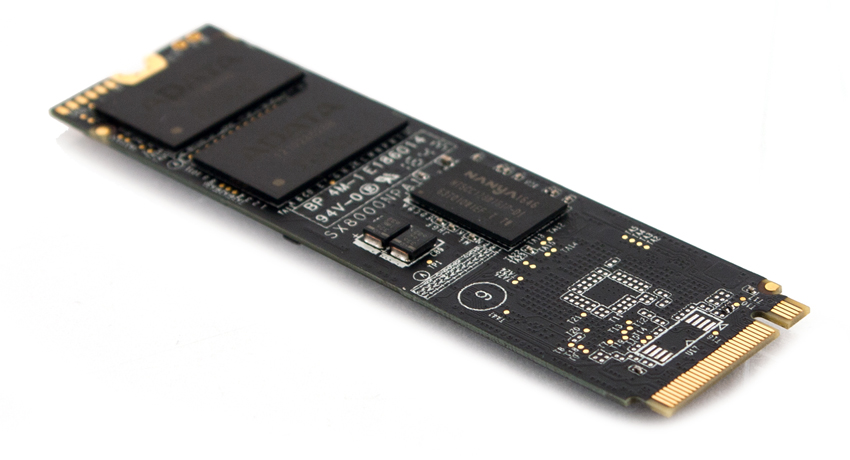 The other side of the SSD houses the remaining NAND packs.

In our 2MB sequential benchmark, the SX8000 recorded 1.49GB/s read and 986.65MB/s write, placing it at the bottom of the leaderboard among the NVMe drives, though still well ahead of the Samsung SATA drives.

Looking at 2MB random transfer performance, the SX8000 reached read and write speeds of 1.28GB/s and 976.27MB/s, respectively. These results place the ADATA drive above the WD Black in reads at the bottom of the pack, while writes place it in the middle.

The purpose of our random 4k benchmark is to put more strain on the drives in terms of throughput. Here, The ADATA SX8000 had transfers speeds of 25.75MB/s read and 83.34MB/s write, placing it at the bottom of the leaderboard (though it was above the WD drive in writes).

Looking at 4k latency, though still far behind the other tested drives, the ADATA XPG SX8000 posted a respectable average latency of 0.0463ms. The SX8000 also posted 19.81ms in max latency; this was much slower than most of the other drives but better than the OCZ RD400 and 128GB Samsung SSD 850 EVO SSDs. 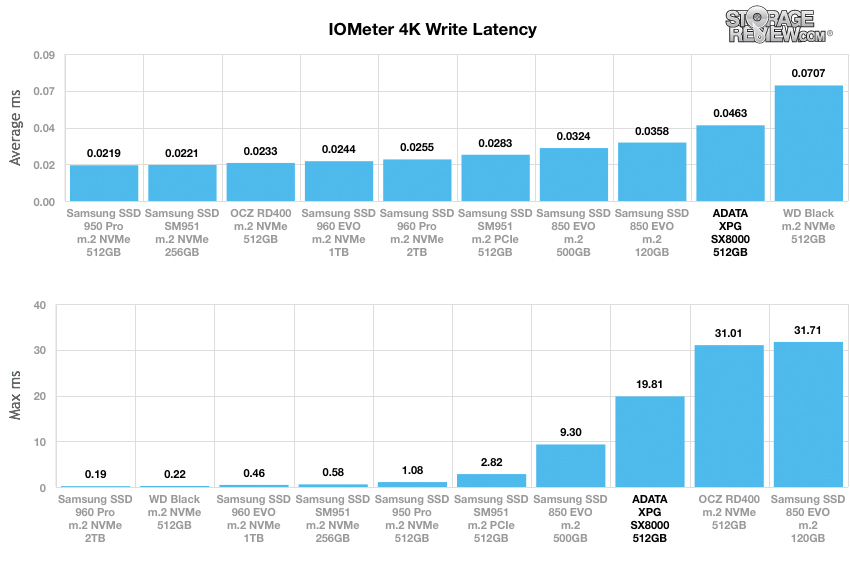 For our next 4K test, we move to a workload with 100% write activity, which scales from 1QD to 64QD. Looking at aligned write performance, the ADATA drive picked up its performance significantly, placing at the top of the pack just behind the two Samsung SSD 960 drives. The SX8000 peaked at 162K IOPS. 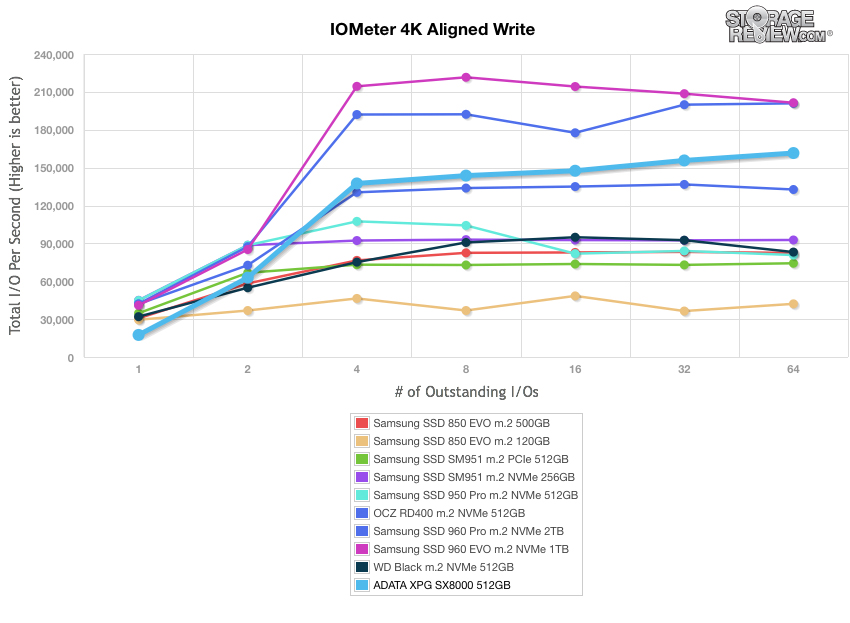 The ADATA XPG SX8000 fell a bit behind during aligned read, posting a score of 158,083.9 IOPS. This placed it in the middle of the leaderboard. 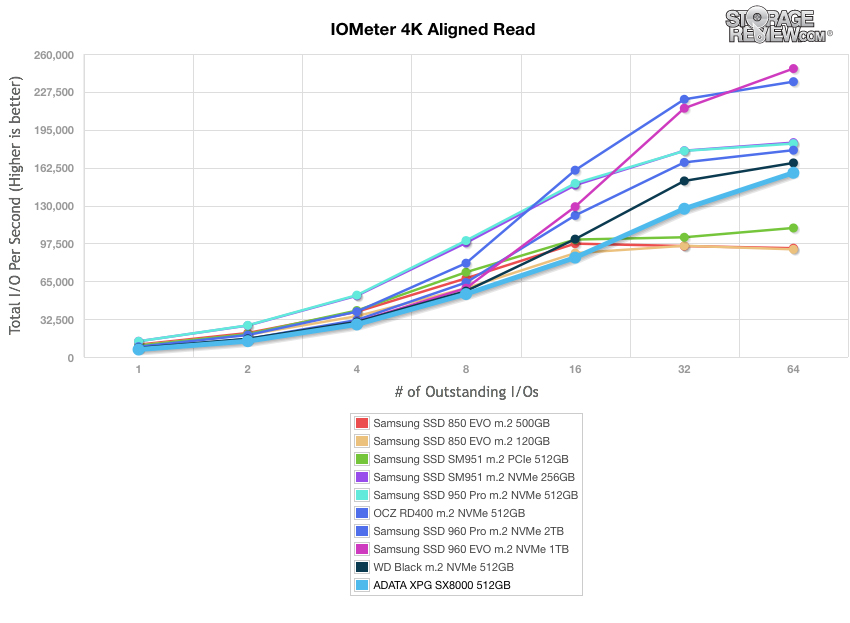 The database profile features a 67% read and 33% write workload, focusing on transfers around 8K in size. The SX8000 clocked a peak of 99272.2 IOPS while slowing down at the end to 67,968.9 IOPS. This placed it in the lower-mid part of the leaderboard. 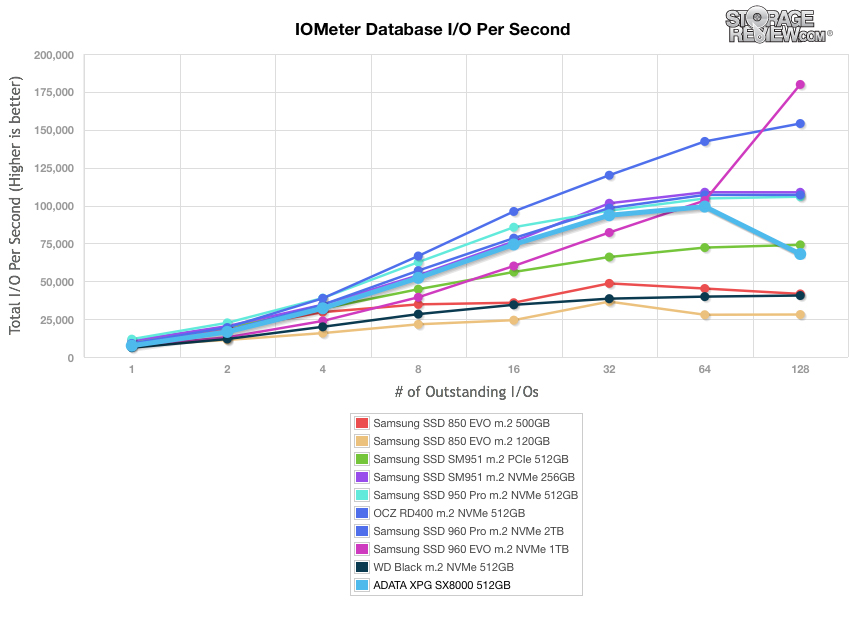 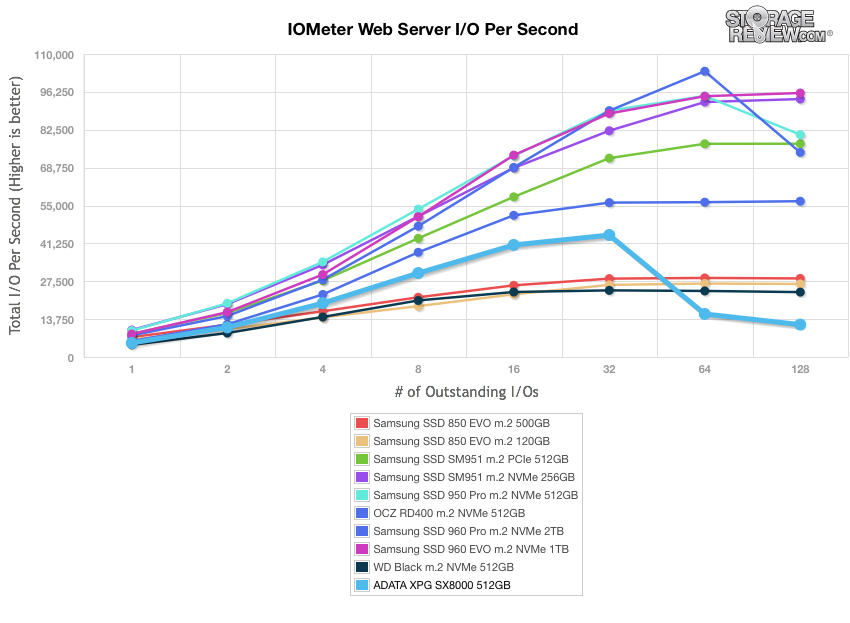 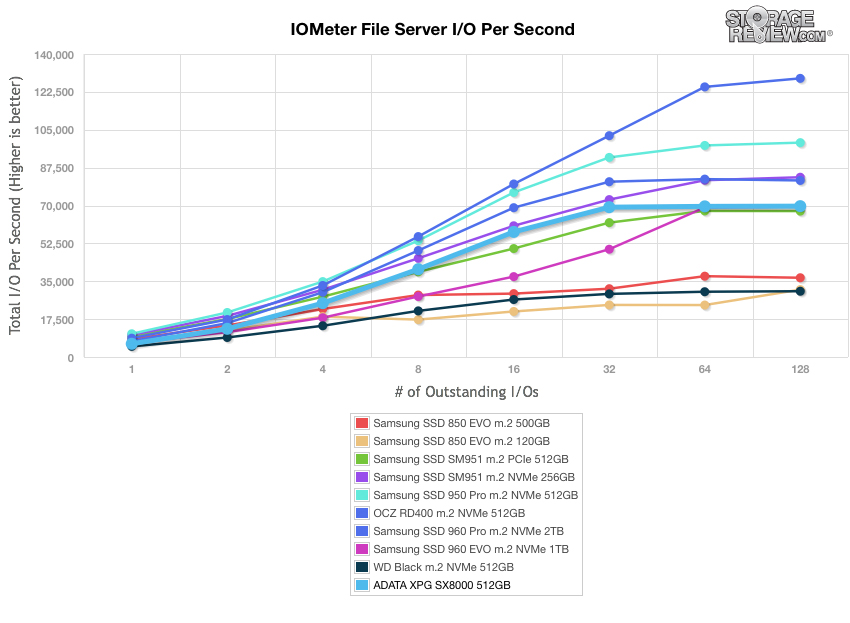 The last profile looks at workstation activity; with a 20% write and 80% read mixture using 8K transfers. Again, the SX8000 slowed down significantly in the latter stages of the test, which placed it at the bottom of the leaderboard. It did have a respectable peak IOPS of 95,204.59, however. 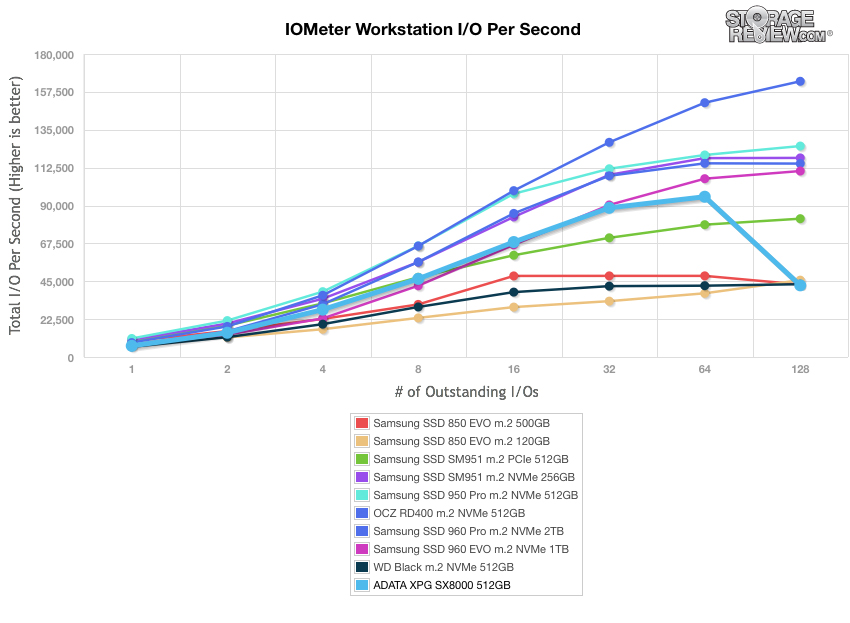 While the results of synthetic benchmarks are important in identifying the key strengths and weaknesses of a drive, performance in these tests does not always translate directly into real-world situations. To get a better idea how the ADATA XPG SX8000 will handle itself in the field, we will chart StorageMark 2010 HTPC, Productivity, and Gaming traces against comparable drives. Higher IOPS and MB/s rates with lower latency times are preferred.

Here, the SX8000 significantly outperform the SATA drives with 16,983 IOPS, 792.85MB/s and 0.377ms in average latency; however, it ranked near the bottom of the pack among the NVMe drives (though significantly better than the WD Black). 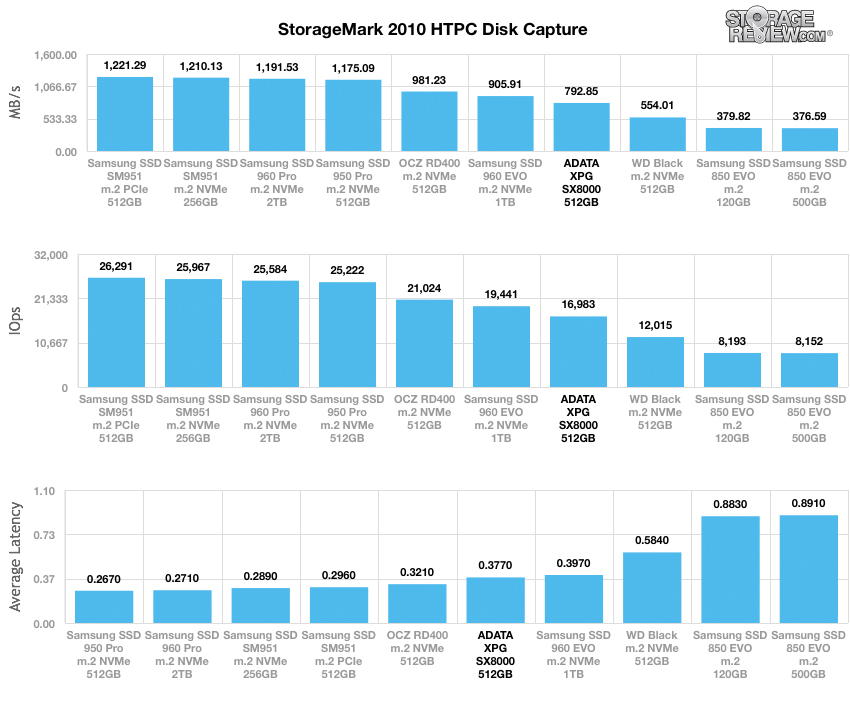 In the productivity benchmark, the ADATA XPG SX8000 found itself in a similar position as the HTPC trace with 17,685 IOPS, 531.63MB/s and 0.4310ms in average latency. The Samsung SSD 960 Pro and EVO drives were the top performers here. 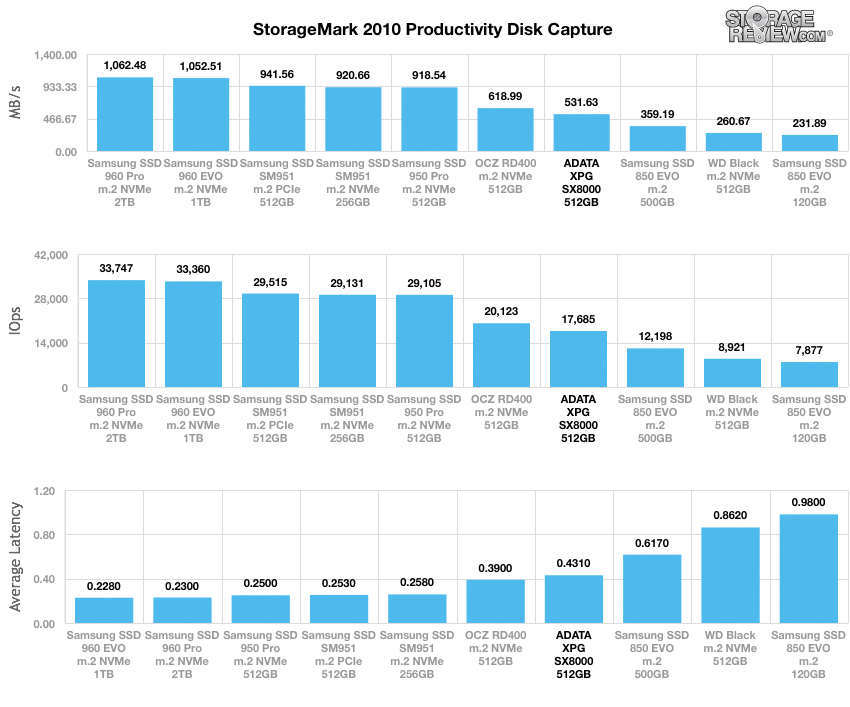 In our gaming benchmark, the SX8000 was easily one of the best performing drives, posting and impressive 30,591.75 IOPS, 1,489.82MB/s, and 0.254ms in average latency. These results placed the ADATA drive right at the top of the leaderboard and just behind the always formidable Samsung SSD 960 Pro m.2 NVMe SSD. 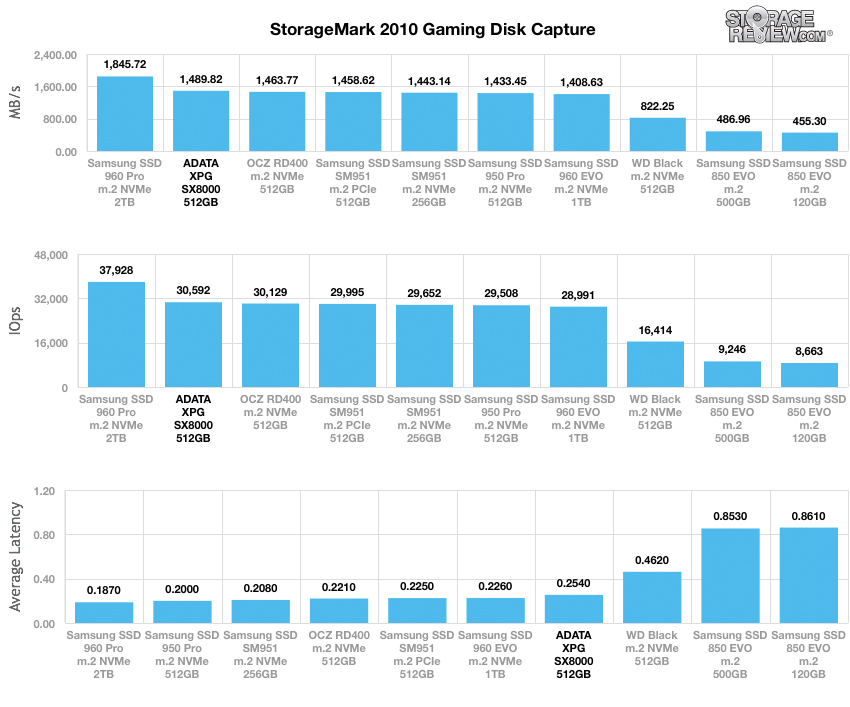 The ADATA XPG SX8000 is the company’s premium SSD offering designed for resource-intensive applications on high-end machines such as gaming and graphics rendering. Its small form factor also allows it to fit nicely inside ultra-thin notebooks and in desktops that have limited physical space under the hood. Ranging in capacities from 128GB to 1TB, ADATA’s drive is NVMe 1.2 certified and supports the latest Intel platforms. It also features 3D NAND Flash, SLC Caching, DRAM Cache Buffer and LDPC ECC technologies.

Diving into its performance shows fairly uneven overall results, falling behind in many of our benchmarks. When looking at sequential 2MB performance, the SX8000 posted 1.49GB/s read and 986.65MB/s write, placing it at the bottom of the leaderboard among the NVMe drives. Our 2MB random transfer results were more of the same. Here, the SX8000 recorded read and write speeds of 1.28GB/s and 976.27MB/s, respectively, which was better than just the WD Black in reads and in the middle of the pack for writes (among NVMe drives). Expectedly, our mixed workloads benchmarks showed the ADATA drive either near the middle or at bottom of the pack. Results of told a similar during our consumer real-world benchmarks, with the exception of the gaming category. In this trace, the SX8000 was one of the best performing drives, posting and impressive 30,591.75 IOPS, 1,489.82MB/s, and 0.254ms in average latency.

Consumers looking upgrade their rigs to an M.2 NVMe-based system will find that the XPG SX8000 adequately leverages the technology, offering far better performance than traditional SATA SSDs. As our performance tests indicate, ADATA has designed the XPG SX8000 with gamers in mind with improved load times and other benefits. Professionals and other serious consumers will certainly experience sigficant performance gains as well. That being said, the ADATA drive doesn’t have the same pedigree and power as other drives like the Samsung 950 Pro. And those in the market for an M.2 NVMe SSD will likely open their pockets to an extra 75$ to 100$ for a much superior premium drive.

Though prosumers will likely spend extra for higher end NVMe M.2 drives, the XPG SX8000 still offers a huge boost in performance over traditional SATA SSDs and at an affordable price.