Announced during CES 2017, the Kingston DataTraveler Ultimate Generation Terabyte (GT) is a USB flash drive that provides a whopping 2TB in maximum capacity–the highest we’ve seen on the market to date. With such a large storage pool, this GT gives consumers and professionals a viable alternative to Cloud storage for transporting and storing huge amounts of data.

Announced during CES 2017, the Kingston DataTraveler Ultimate Generation Terabyte (GT) is a USB flash drive that provides a whopping 2TB in maximum capacity–the highest we’ve seen on the market to date. With such a large storage pool, this GT gives consumers and professionals a viable alternative to Cloud storage for transporting and storing huge amounts of data. 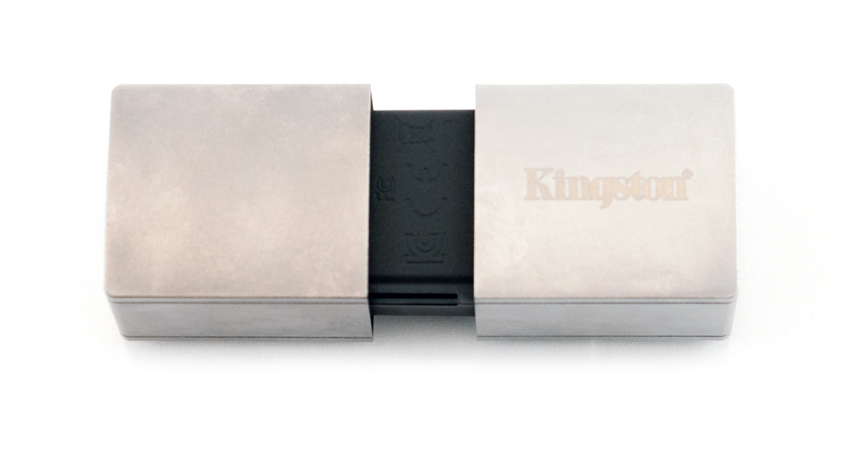 Kingston is known for their rugged and robust builds. The DataTraveler Ultimate GT expands on this by offering a premium, capless alloy build for extra durability. The company’s new DataTraveler is compatible with the USB 3.1 Gen 1 interface; Kingston quotes a generous 300MB/s read and 200MB/s write speeds so professionals and on-the-go workers should be able to edit and transfer files on the fly without much delay.

The DataTraveler Ultimate GT is available in both 1TB for $940 and 2TB for $1,600 and is backed by 5-year warranty and free technical support.

The DataTraveler Ultimate GT is unique looking USB drive. Its simple rectangular design is comprised of a sleek zinc-alloy metal casing for shock resistance resulting in a rugged and reliable build. However, this chunky size comes at a cost, as you can’t use the Ultimate GT with most notebooks (and certainly not with PCs with crowded USB ports) unless you use the bundled cable extender. You essentially have a slightly more portable version of the Samsung T3, removing the biggest upside of a USB flash drive. As you can see in our comparison shot below, the GT is twice as thick as the T3.

On the end of the drive next to the capacity label is the status LED, which indicates drive activity and whether the GT is working. 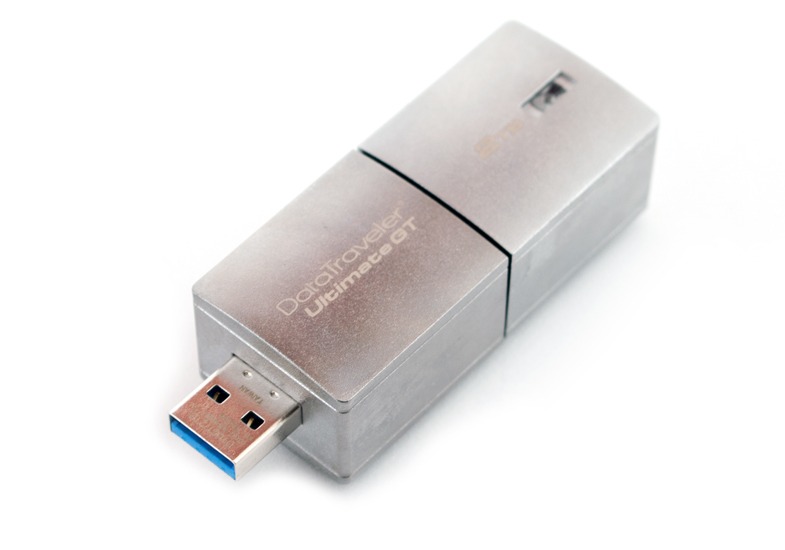 The slide mechanism (i.e. “capless protection”) protects the USB connector. Just push (to lock) and pull (to unlock) the ends of the GT drive until you feel and hear a clicking noise. It’s simple and works very well.

To test the performance of the DataTraveler Ultimate GT USB flash drive, we will look at transfer speeds using a USB 3.0 connection on a previous generation MacBook Pro using the BlackMagic disk speed test–a Mac-specific tool mainly used to see how well it works with high quality video.

The following results were disappointing to say the least. As shown below, writes topped out at just 97MB/s during this test for 3-6 seconds, then fell to a crawling 12.8MB/s (or less) for the duration of the test until we went back to reads. This behavior was recurring, no matter how many times we put it through this benchmark. Reads reached a maximum of 335.4MB/s. 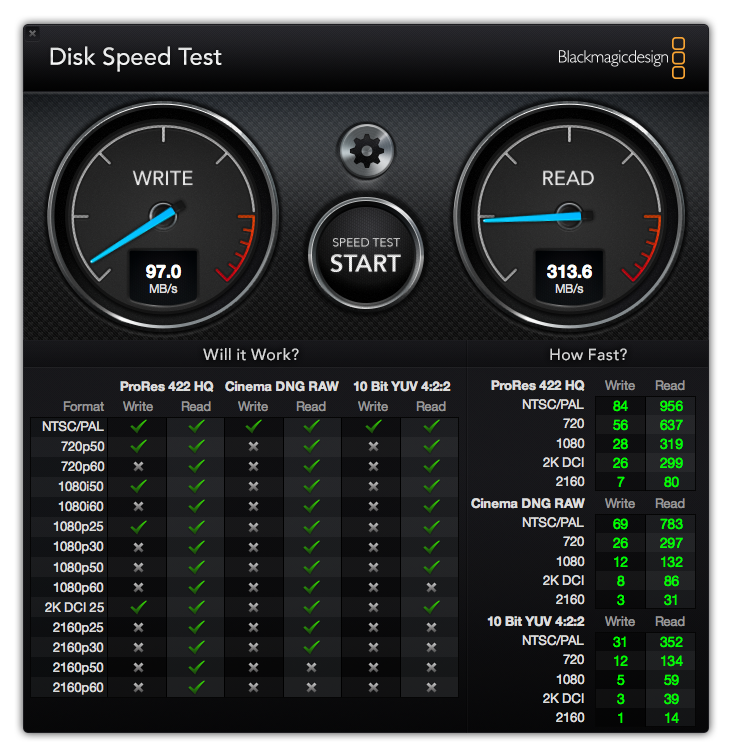 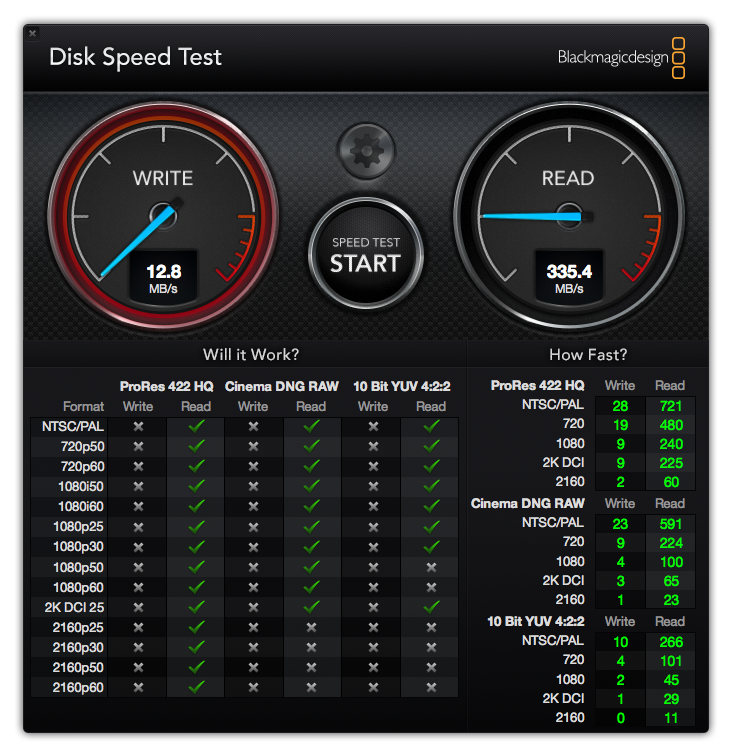 Looking at 2MB sequential speeds (without a filesystem leveraging IOMeter) tells a similar story. Here, the DataTraveler Ultimate GT posted 203.18MB/s read and 108.25MB/s write, while random speeds hit just 63.24MB/s read and a snail-paced 0.649MB/s write. While we don’t always include 4k results with thumb drives, we did want to point them out this time as they too are quite poor. For writes we had random 4k performance of 0.21 IOPS and for reads we saw 130 IOPS.

The Kingston DataTraveler Ultimate GT is a ruggedly built USB flash drive that offers an industry-leading 2TB model. This high capacity-point gives those who work with huge amounts of data a physical alternative to the cloud (or a supplemental method to backing up data). It features a slick design, USB 3.1 compatibility and a gracious 5-year warranty.

Unfortunately, that’s where the benefits end, as Ultimate GT fell well behind in performance. In the BlackMagic disk speed test, writes only reached a maximum of 97MB/s (for only 3-6 seconds) and fell significantly to 12.MB/s and under for the rest of this test. We repeated the test several times and this behavior remained. Moreover, when looking at 2MB sequential speeds, the DataTraveler Ultimate GT posted 203.18MB/s read and 108.25MB/s write, while random 2MB speeds recorded a maximum of only 63.24MB/s read and basically stood still in writes with 0.649MB/s. 4K random performance was dismal at best, measuring 130 IOPS read and 0.21 IOPS write

In addition to its disappointing performance, it’s bulky size creates some serious limitations that are rarely seen with traditional USB keys. Because of this, you likely have to use the bundled cable extender and thus end up with essentially an external drive. All these problems combined make the DataTraveler Ultimate GT impossible to recommend, especially when you have exponentially higher-performing external SSDs like the Samsung T3, which is half the price, much faster and very close in overall size when you factor in the required USB extension cable.

Even with its slick, rugged build and huge capacity, the unexpected poor performance of the Kingston DataTraveler Ultimate GT and overly-large size makes this USB flash drive a tough sell.