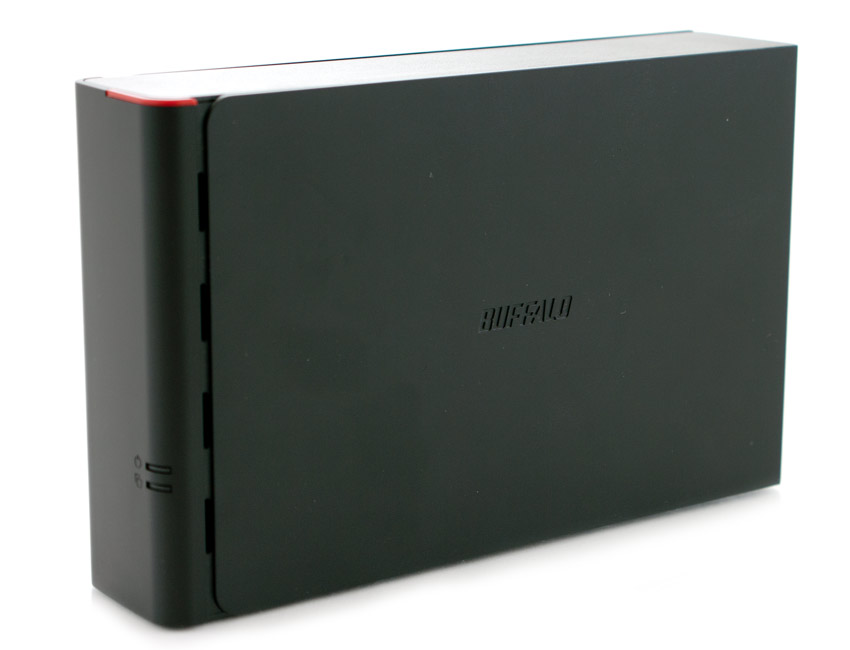 On the technical side of things, the conversation revolves mostly around the 1GB DRAM cache that Buffalo has incorporated on the DriveStation DDR. Conventionally, drives rely on anywhere from 16 to 64MB of native cache, but Buffalo’s 1GB implementation aims to deliver the performance of SSDs at the HDD price-point as writes and reads are cached through an additional layer of DDR3. Buffalo claims that the DriveStation DDR has up to 375% faster file transfer rates, though large file transfers will likely yield less dramatic increases when they exceed the 1GB cache. Our testing below will identify just how much performance is gained with the employment of 1GB DRAM.

The Buffalo DriveStation DDR is available now in 2TB and 3TB capacities with a 3-year warranty and MSRP pricing at $169 and $209, respectively.

The Buffalo DriveStation DDR has a slim build and is composed entirely of black plastic. The surface shows fingerprints, though that is partially minimized by the color. There could be a bit more attention given to the enclosure, but given the pricing of the unit, the build quality is sufficient.

The front of the drive features two LED indicator lights showing power and drive activity. The drive activity LED lets users know when the data is finished being off-loaded from the DRAM cache. Both sides of the DriveStation DDR have Buffalo branding, while Buffalo has affixed the product information label to the bottom of the enclosure. The rear of the DriveStation DDR has the power input and the USB 3.0 port as well as a Kensington lock slot. There is also a vacant fan slot which can be opened with the removal of a screw; in this case it’s more of a passive vent. 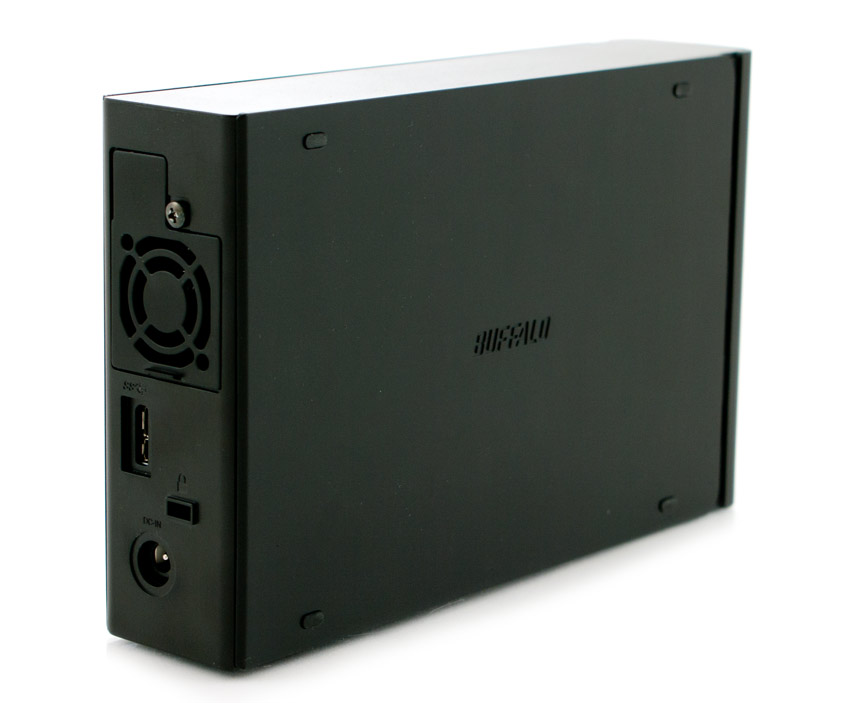 With the drive facing the user, there are four small rubber feet on the left side and four more on the bottom. In this way, Buffalo has designed the DriveStation DDR to be flexible so that users can position the unit to match their space or configuration needs. The feet are tiny and don’t provide much grip, though most users won’t be moving the drive too often. 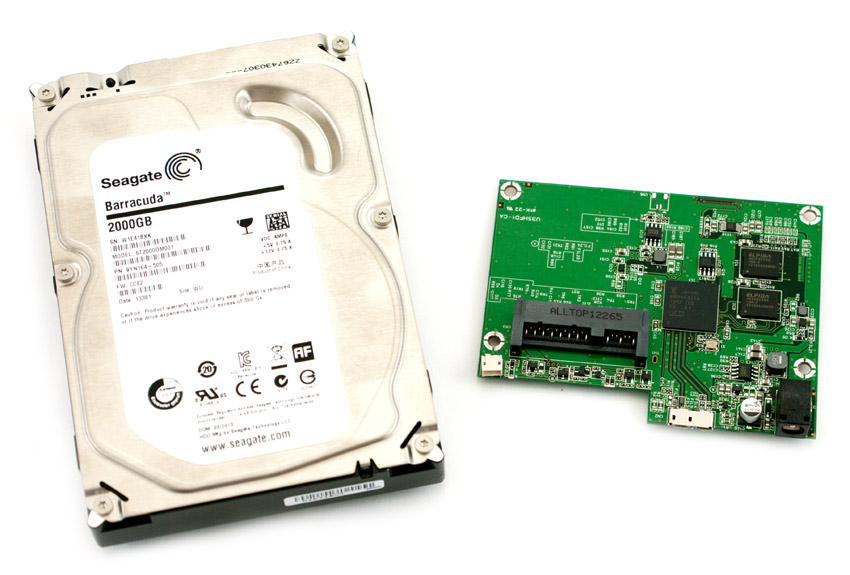 A daughter board attaches to the internal hard drive via SATA interface. The board includes the additional RAM and required componentry. What you won’t see though is any power supply for that RAM outside of the wall plug, which means it’s volatile and will lose data in the event of a power failure. While the cache does tend to flush quickly to the hard drive, depending on the workload and the intensity, there’s a reasonable likelihood that data could be lost. As such, users should always copy files rather than move them to the DDR to protect against this.

One more design note is that like many others in the space, Buffalo multi-sources drives for the DriveStation DDR, and that is the reason for the SATA 3.0 Gb/s rating on the spec sheet. Most drives are SATA 6Gb/s. The included drive will provide the similar performance though when using the cache, but there are definitely going to be performance drops when a 5,400 RPM drive is used under many workloads. Sadly the consumer has no visibility into the drive inside the enclosure.

Buffalo includes a quick setup guide that has users plug in the power and USB 3.0 cable to get started. If users don’t care to use the software suite, they don’t need to. The drive will still provide them with the same functionality. However, for users who want the added benefit of the suite, they can run the pre-installed DriveNavi.exe. Buffalo includes information saying that some utilities work only with specific operating systems. We installed our device using Microsoft Windows 8.

After accepting the terms and conditions, the client prompts users to choose to install the drive or the software. When users select the drive, they are prompted to install the TurboPC EX software to increase data transfer rates. We then installed the Buffalo Backup Utility. The software guides users to choose a backup name, select a drive to which they want to backup (only Buffalo drives are supported), choose folders to exclude from the backup, and specify the backup interval. Options for intervals are 1, 3, 6, 12 or 24 hours, or users can specify a time where backups will run daily. Users can also click in the taskbar and change settings or run a backup on-command. This utility works fairly well, but lacked some features offered by other brands that bundle backup software with drives. Users cannot select specific days on which to run backups (such as weekdays or weekends only), and without choosing to run a backup on-command or disabling backups altogether, they have to run a backup at least daily. For backing up smaller amounts of content such as documents this won’t be a problem, but for users who have a 1TB or so of content, the backup process will be long and may consume too many system resources.

The rest of the Buffalo utility software is fairly straightforward. The eco Manager helps to reduce energy consumption by regulating the DiskStation DDR’s power. Users can set after how much time of inactivity the drive will sleep, and they can also set the drive to sleep immediately. RAMDISK enables users to create a RAM disk on a Windows PC to create a small but fast environment on which to work on files. RAMDISK has an easy setup which autoconfigures as well as an advanced setup that, amongst a few other options, allows users to choose how much RAM to allocate and to assign a drive letter. Also included, DiskFormatter2 enables easy disk formats and Cache Control Tool enables users to select from caching reads and writes, just writes, or nothing.

Using our consumer test platform, we measured transfer speeds from the Buffalo DriveStation DDR utilizing its USB 3.0 interface. To identify performance benefits associated with the 1GB of DRAM, we first tested the DriveStation DDR using a 500MB file transfer, and then we tested it with a 5GB file that exceeds the range of the DRAM.

The Buffalo DriveStation DDR is an external storage device that interfaces over USB 3.0, supports both PCs and Macs, and is designed to offer greater performance than standard external drives by featuring an additional 1GB DRAM cache on top of the more conventional 16-64MB found natively on a hard drive. The external hard drive also includes a software suite designed to enhance transfer speeds and to increase functionality. Some software relates to the cache performance to enhance transfer rates, and another of the included pieces of software enables users to backup their content to the DriveStation DDR or any other Buffalo drive. DriveStation DDR is also compatible with Time Machine providing Mac users with a backup solution as well.

The Buffalo DriveStation DDR provided far improved sequential performance for our 500MB file test which fit inside cache, matching the SSD-like speed that Buffalo claimed. Those figures should hold steady for file transfers ranging up to 1GB. That means users will see a solid performance bump for transfers of photos, documents, music, DVD movie backups, etc. Random large-block transfers were a different story with the DriveStation DDR managing just 22MB/s for writes. Moving on, we over-saturated the drive’s DRAM cache with a 5GB file moving transfers onto the hard drive inside. The DriveStation DDR was still able to manage respectable figures for sequential transfers, and random large-block transfers picked up in speed to 91MB/s for writes. Moving content in high-capacity folders such as archives of media libraries, family photos, Blu-ray movie backups, and the like will have performance closer to the native HDD performance, though the large DRAM should provide some gains.

Since the HDDs are multi-sourced, it’s tough to pinpoint the exact performance users will see. Our drive was a Barracuda 2TB which is 7,200 RPM and offers SATA 6Gb/s. Buffalo has explained that some models may include 5,400 RPM drives, which may yield performance concerns for file transfers that move outside of cache. As this device is targeted to a more enthusiast market, it would have been nice to see Buffalo at least use same-generation, same spindle speed product throughout the line.

A bigger problem though is the risk to user’s data with a non-protected DRAM buffer, which depending on what’s being transferred, could mean data remains in-flight for a few seconds to upwards of 30 seconds or more while being written to the hard drive. With sequential transfers we saw delays of up to a few seconds, where the 1GB buffer could be flushed out to the hard drive fairly quickly. With random-access though, where the hard drive can absorb data much slower, the drive was left performing write activities for much longer. The risk is obvious; if you lose power during any write activity, you stand to lose 1GB of data caught in DRAM with no battery backup. We replicated several power fail scenarios where entire files were rendered corrupt. It’s highly advisable to use the DDR with a UPS, or with the acceptance that data could be damaged in transit and thus use safe transfer policies (i.e. copy rather than move).

The Buffalo DriveStation DDR goes beyond standard external drives by offering a large 1GB DRAM cache to increase performance. While the lack of power backup for the cache makes using the DDR a little dicey, in the right environment and with the right data policies, certain users will see great benefit without much added cost.