The OCZ Vertex 450 is the latest mainstream client SSD from OCZ that leverages their own Barefoot 3 controller, 7mm form factor and 20nm MLC NAND. That 20nm MLC NAND represents a significant 20% decrease over the NAND die utilized in its predecessor Vertex 4 which was 25nm. The Vertex 450 replaces the Vertex 4, and the reduction in NAND package size and move to proprietary controller enables OCZ to squeeze maximum value out of the Vertex 450 for consumers delivering a blend of economics and performance. While the 7mm form factor enables it to fit in most any notebook, the included 3.5″ adapter makes it a snap to install in desktops and the Vertex 450 is bundled with Acronis True Image software to simplify moving data from an existing drive to the Vertex 450.

The OCZ Vertex 450 is the latest mainstream client SSD from OCZ that leverages their own Barefoot 3 controller, 7mm form factor and 20nm MLC NAND. That 20nm MLC NAND represents a significant 20% decrease over the NAND die utilized in its predecessor Vertex 4 which was 25nm. The Vertex 450 replaces the Vertex 4, and the reduction in NAND package size and move to proprietary controller enables OCZ to squeeze maximum value out of the Vertex 450 for consumers delivering a blend of economics and performance. While the 7mm form factor enables it to fit in most any notebook, the included 3.5″ adapter makes it a snap to install in desktops and the Vertex 450 is bundled with Acronis True Image software to simplify moving data from an existing drive to the Vertex 450. 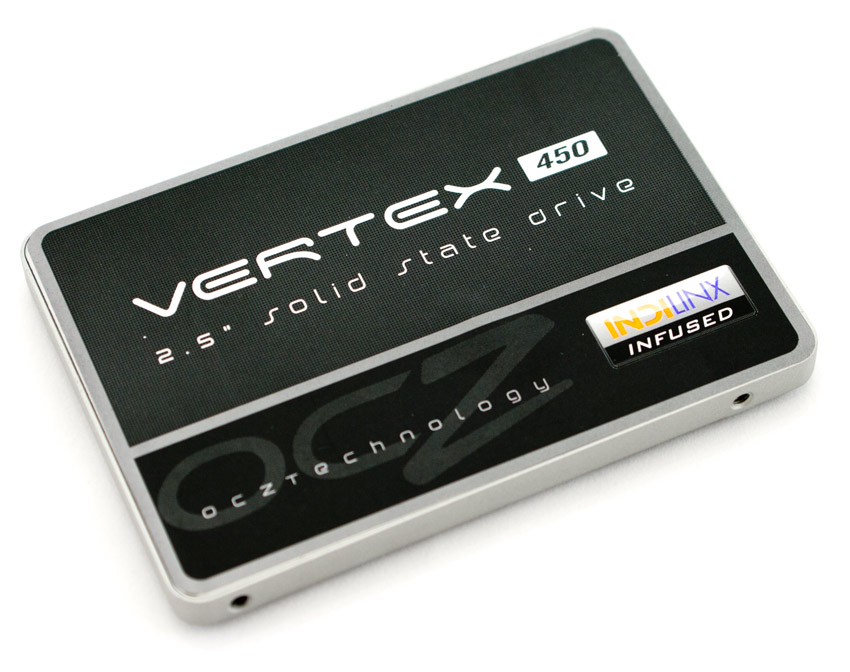 OCZ has recently oscillated between controllers using SandForce controllers with Vertex 2, 3 and 3.20 and a Marvell controller with Vertex 4. However in 2011, OCZ started on a path to control their own destiny by acquiring Indilinx and some of PLX’s design team, and recently that move has been starting to pay off. Those teams brought with them the Barefoot 3 controller and firmware as well as other valuable storage-centric IP. OCZ was able to implement into the OCZ Vector their first in-house controller via a specially designed Barefoot 3 M00 (BF3-M00). Now, OCZ is again utilizing their own Barefoot 3 controller (this time BF3-M10) and firmware in the OCZ Vertex 450. This play enables OCZ greater control over pricing as well as performance, not to mention improved reliability and support.

While the OCZ Vertex 450 and Vector share similarities in how they were engineered, there are significant contrasts. The Vertex 450 is a more mainstream SSD and the Vector is a performance SSD. The Vertex 450 uses 20nm NAND packages compared to the 25nm packages found in the Vector series. The Vertex 450 utilizes the BF3-M10 controller which features a power optimized clock generator and runs at a slightly lower clock speed than the BF3-M00. This helps to reduce cost, which enables OCZ to provide more value and availability to consumers, but it will also make a minor difference when it comes to performance.

The design of the OCZ Vertex 450 is similar to other OCZ products that are functional yet stylish. The label covers the whole drive and includes all of the relevant branding. The sides are composed of smooth metal as is the underside. The bottom also features a product label providing users all of the appropriate information about the drive including capacity, model and serial number. 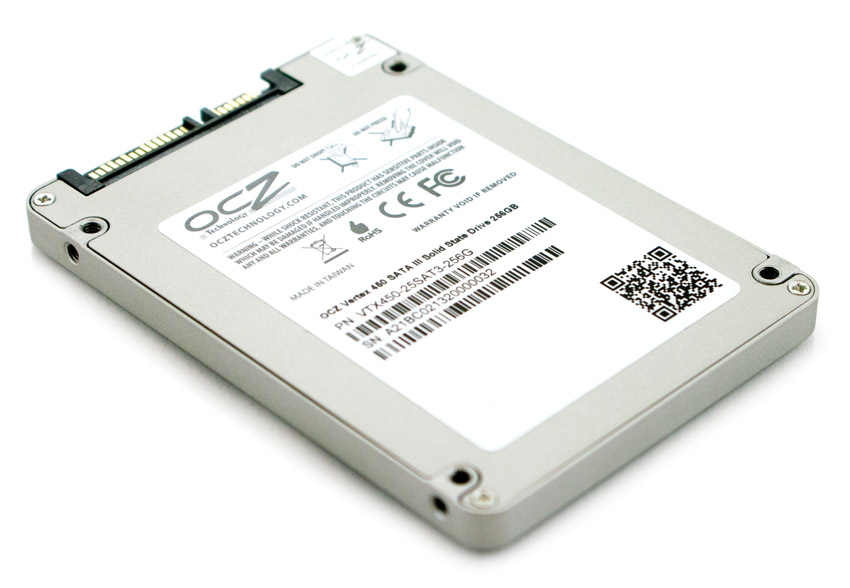 The only other features worth noting are that the side profile presents screw holes that enable the drive to be mounted properly and the front of the drive is rounded out with standard SATA power and data connector. 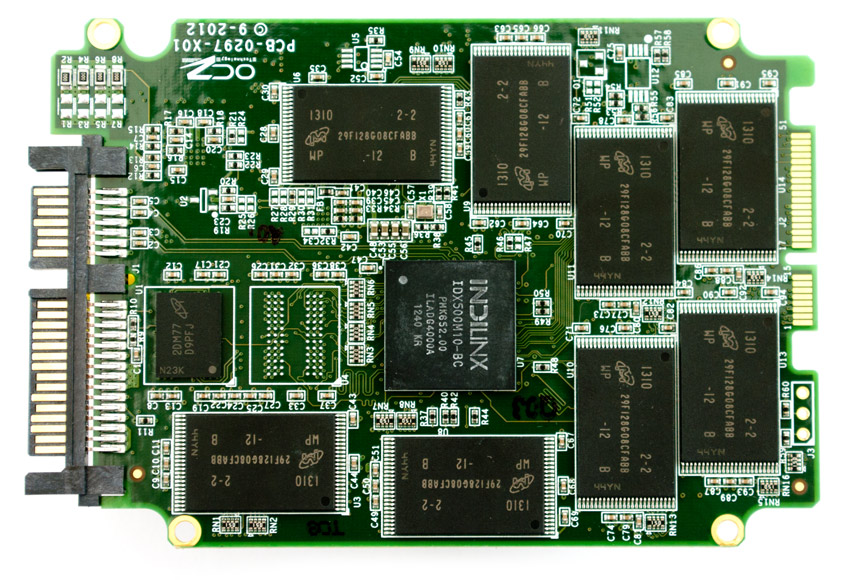 The 450 uses 20nm Micron MLC NAND, which at this point is the defacto NAND standard for those who don’t own their own NAND fab. The 256GB Vertex 450 SSD uses sixteen 16GB NAND packages, equally divided among both sides. 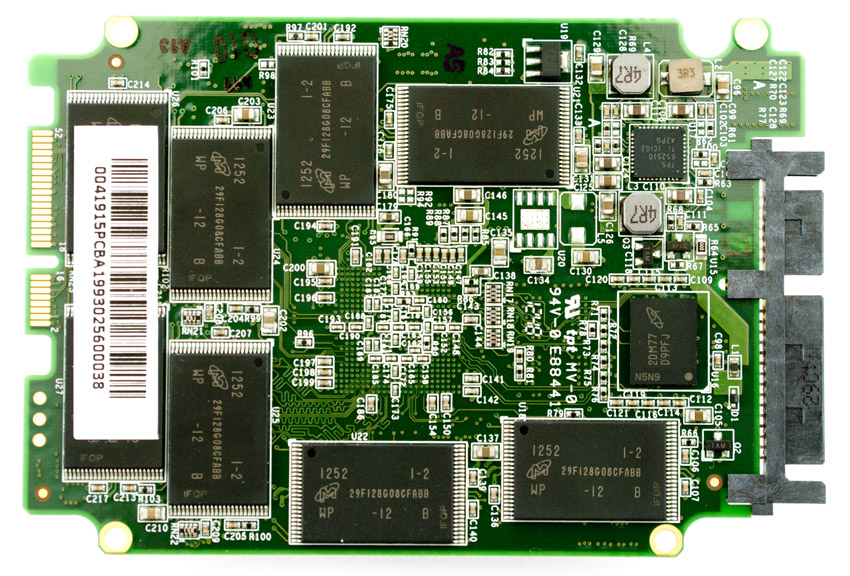 In our first benchmark where we test straight line sequential performance, we measured speeds of 484MB/s read and 480MB/s write which placed the OCZ Vertex 450 256GB in line with the other SSDs.

Our next test maintains the 2MB transfer size, but this time we are measuring random transfer speeds. The OCZ Vertex 450 256GB ranked at the top just under the OCZ Vector at 480MB/s read, though it ranked near the bottom of the group in write activity at 438MB/s.

In our next test we measure low queue depth random 4k read and write performance. In this test, the OCZ Vertex 450 256GB placed near the bottom of the group with read activity figures at 22MB/s and near the middle of the group for write activity at 70MB/s.

Our next test scales the queue depth between 1 and 64, showing how well the drive reacts to an increased workload. In a random 4k read setting, the OCZ Vertex 256GB scaled towards the middle of the group, peaking around 83,400 IOPS. 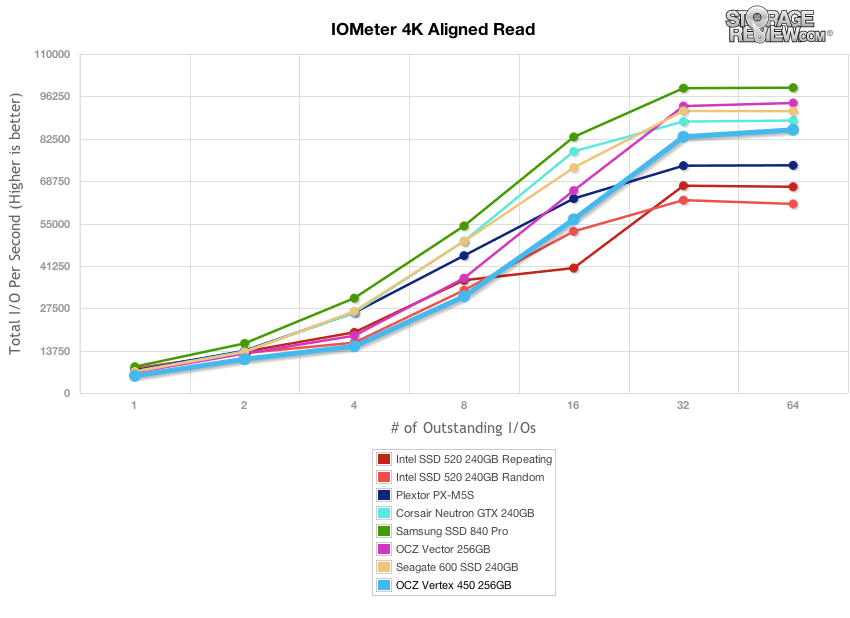 Evaluating random 4k write performance, the OCZ Vertex 450 256GB started off on the high end of throughput, but came in at the middle of the group in the terminal queue depths, with its greatest performance at about 85,400 IOPS. Expanding our QD1 4k test, we look at write latency of each SSD. Lower numbers are better, since it means less wait time for activity to process. Max latency is also important, although that number can change as the NAND experiences wear over time. We measured an average latency of 0.0554ms from the OCZ Vertex 450 256GB. Its peak latency performance was less than stellar at 609.35ms. 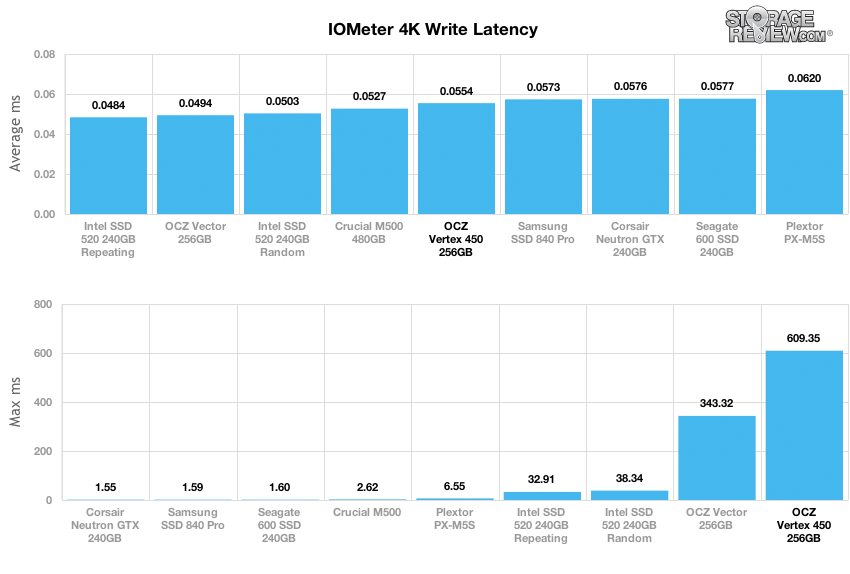 The first profile is our database test with a 67% read and 33% write workload mix primarily centered on 8k transfer sizes. In this test, the OCZ Vertex 450 256GB and the OCZ Vector performed strongly at the top of the group. 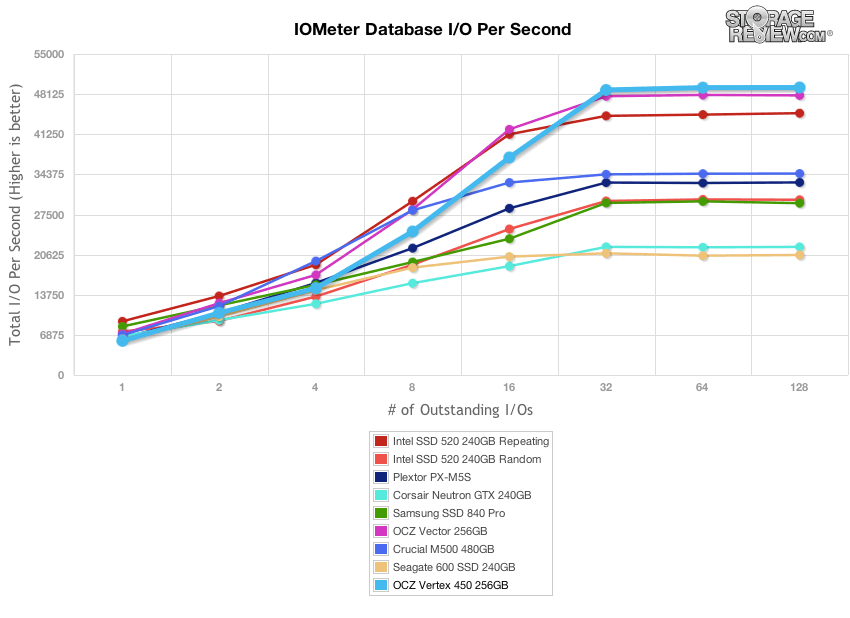 The next test looks at a file server profile with an 80% read and 20% write workload spread out over multiple transfer sizes ranging from 512-byte to 64KB. In this testing, the OCZ Vertex 450 256GB was near the middle of the group. 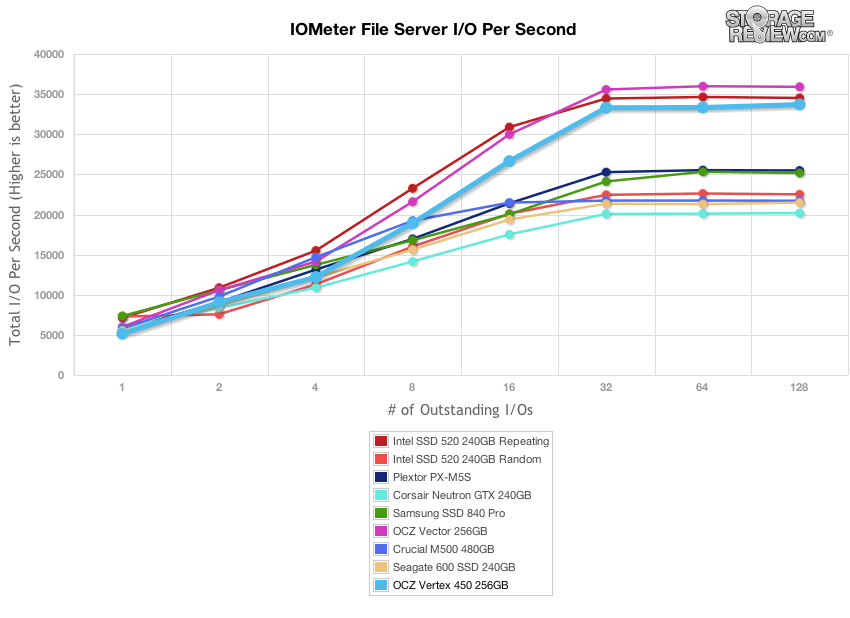 Our web server profile is read-only with a spread of transfer sizes from 512-byte to 512KB. Here, the OCZ Vertex 450 256GB placed in the middle of the group. 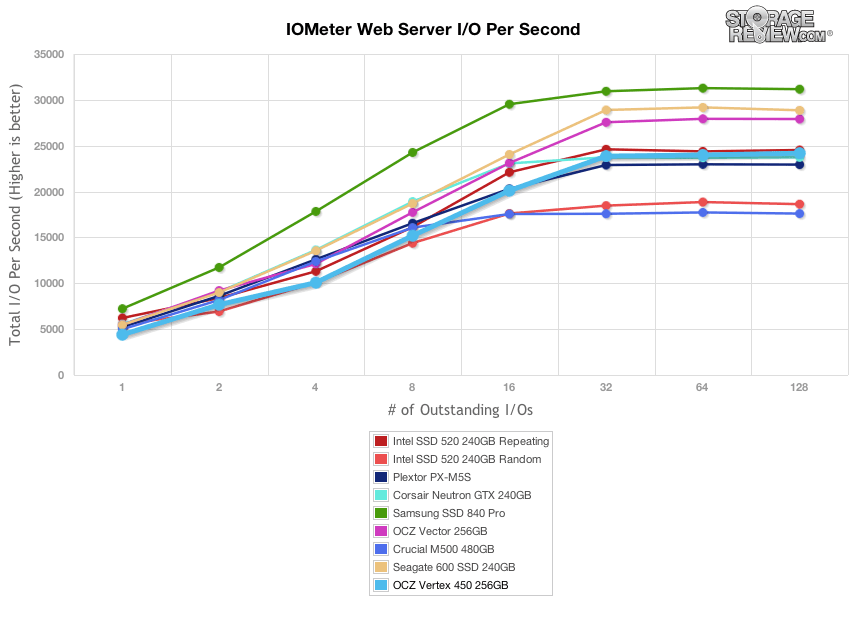 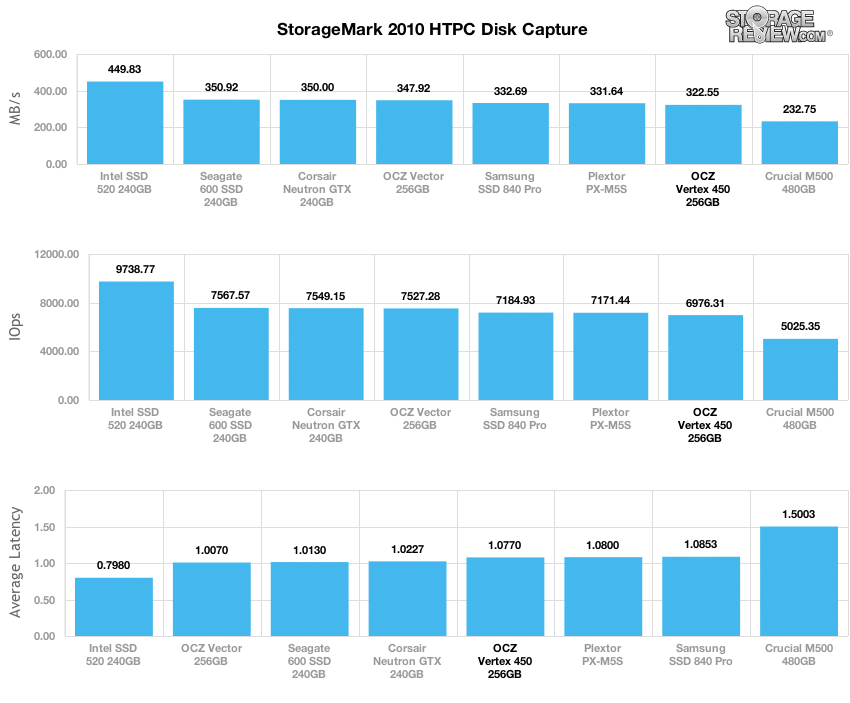 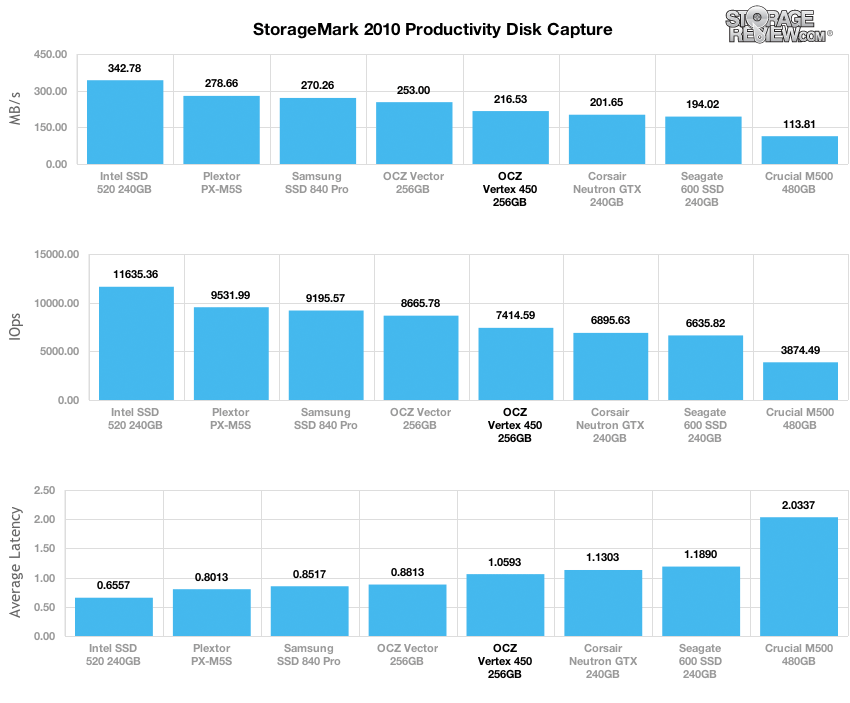 In our productivity trace, the OCZ Vertex 256GB tested near the middle of the group at a 217MB/s average speed and 7,415 IOPS. 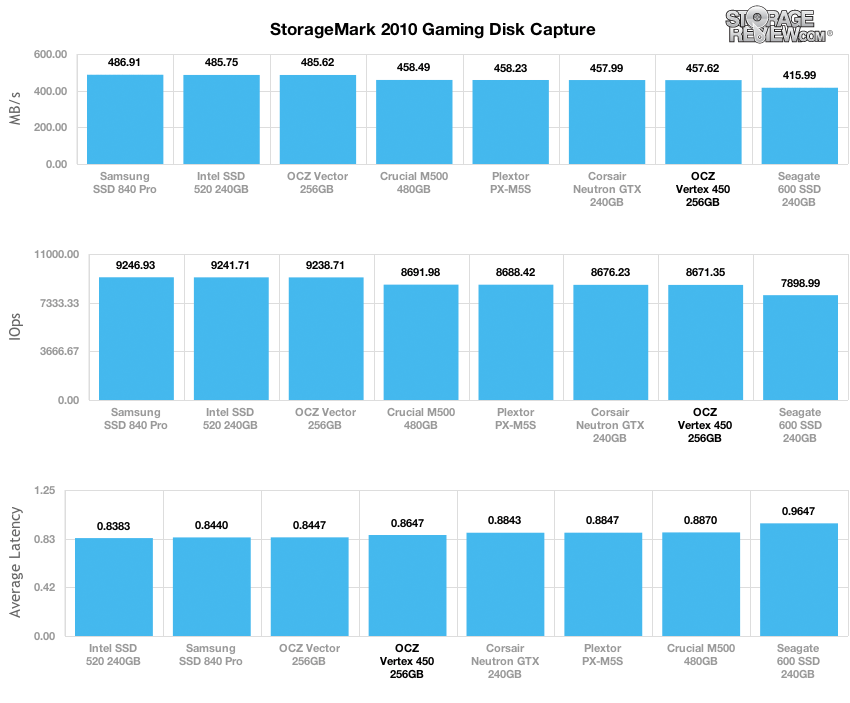 In our read-heavy Gaming trace, the OCZ Vertex 256GB delivered a middle of the group 458MB/s average speed and 8,671 IOPS.

The OCZ Vertex 450 256GB included datasheet numbers that indicated that the drive would consume 0.60W in idle operation and 2.65W in active operation.

We measured numbers almost right on the spot with the idle figure at 0.635W. The 2.65W figure OCZ provided was close to our read power mark which was 2.84, while write activity came in higher at 4.88W.

The OCZ Vertex 450 client SSD comes in a 7mm form factor with 3.5″ adaptor which fits most any desktop or notebook application, and the drive features 20nm MLC NAND and an in-house developed Barefoot 3 controller. The controller leverages OCZ’s acquisition of Indilinx and enables them to provide even better support for reliability on top of more cost-efficiency to drive down prices. The Vertex 450 also features another engineering move targeted at economics in their 20nm NAND package implementation – this reduces costs in the NAND fabrication process. Lastly, another important feature that OCZ has in the Vertex 450 is its 256-bit AES encryption which can help in business environments that require higher levels of encryption support.

In our testing, the OCZ Vertex 450 256GB held its own amongst some tough competition, but with performance tending toward the middle of the high-performance consumer group, proving well for an affordable mainstream SSD. Where the drive did perform best was in our server profile testing which is weighted heavily toward reads. In these categories including the 80% read workstation and 100% read web server profile, the Vertex 450 and Vector both performed strongly. Particularly, in the workstation profile the OCZ drives had the greatest performance of all the SSDs we tested. One area of weakness that did crop up, as it did with the Vector, is higher than average 4k max latency. Outside of these categories, the Vertex 450 ranked near the middle of the group and proved itself to be another solid offering from OCZ.

Clearly OCZ is expanding the SSD portfolio based around their own technology, which is the most obvious path to success for their business. They’re killing off their Marvell drives in the Vertex 4 and the writing is clearly on the wall that the recently revised Vertex 3.20 with the SandForce controller is likely the last new SandForce drive we’ll see from OCZ…at least on the consumer side. OCZ has also announced the next client PCIe solution will be based on the Barefoot 3 controller, supplanting the SandForce controller in the RevoDrive. To OCZ’s credit, the Barefoot 3 has shown itself to be pretty respectable and having the controller technology in-house gives OCZ several advantages including better support, ease of improvements and cost control. The results are what matters though and the Vertex 450 is a very good example of what the future will look like for OCZ.