The CalDigit T4 is a four-bay storage solution designed for the Mac platform, featuring the latest Thunderbolt 2 technology, storage capacities up to 20TB and compatibility with various RAID configurations to offer professionals quite a bit of versatility. The new T4 also comes with the CalDigit Drive Utility, which is management software that allows for complete control of the company’s storage devices. The bundled software also provides users with vital drive information, RAID management, event notifications, email notifications, event logs, and disk benchmark tests.

The CalDigit T4 is a four-bay storage solution designed for the Mac platform, featuring the latest Thunderbolt 2 technology, storage capacities up to 20TB and compatibility with various RAID configurations to offer professionals quite a bit of versatility. The new T4 also comes with the CalDigit Drive Utility, which is management software that allows for complete control of the company’s storage devices. The bundled software also provides users with vital drive information, RAID management, event notifications, email notifications, event logs, and disk benchmark tests. 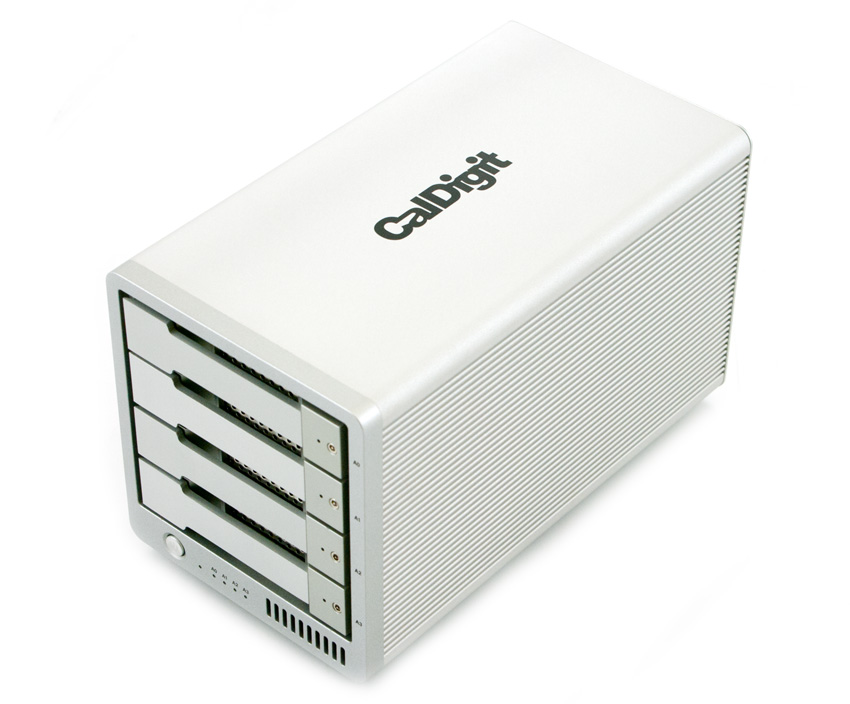 The T4 supports both full size 3.5” hard drives and 2.5” solid state drives, giving users flexibility when configuring the T4. Users can either configure their T4 with the maximum amount of capacity by using larger HDDs or decide to go for a performance-heavy configuration with SSDs. As such, CalDigit has quoted the T4 with speeds of 750MB/s when populated with 3.5” HDDs while reaching speeds upwards of 1,370MB/s when using SSDs in RAID0. In addition, its dual Thunderbolt 2 ports allow users to connect a 4K monitor as part of a daisy-chain.

Adding to its versatility, the T4 can support RAID 0, 1, and 5 configurations to satisfy a variety of use case, even allowing the combination of RAID0 or 1 with a JBOD. Users can also RAID two drive bays into a RAID0 or 1, and RAID the remaining two in the exact same configuration; this gives us two RAIDs in one device.

The T4 features CalDigit’s new 5-year warranty and goes for roughly $899 MSRP for the 4TB HDD model, though they offer several configurations with both HDD and SSD options. Our review configuration is a 12TB 4x3TB HDD model.

The T4’s four-bay design is pretty compact though it is still built to withstand the demanding conditions of professional work environments. This is quite obvious when we pick up and handle the device, as it is constructed with a die-cast aluminum chassis for a high level of durability. The look of the T4 is very nice, and can easily be setup alongside a Mac workstation without feeling out of place. 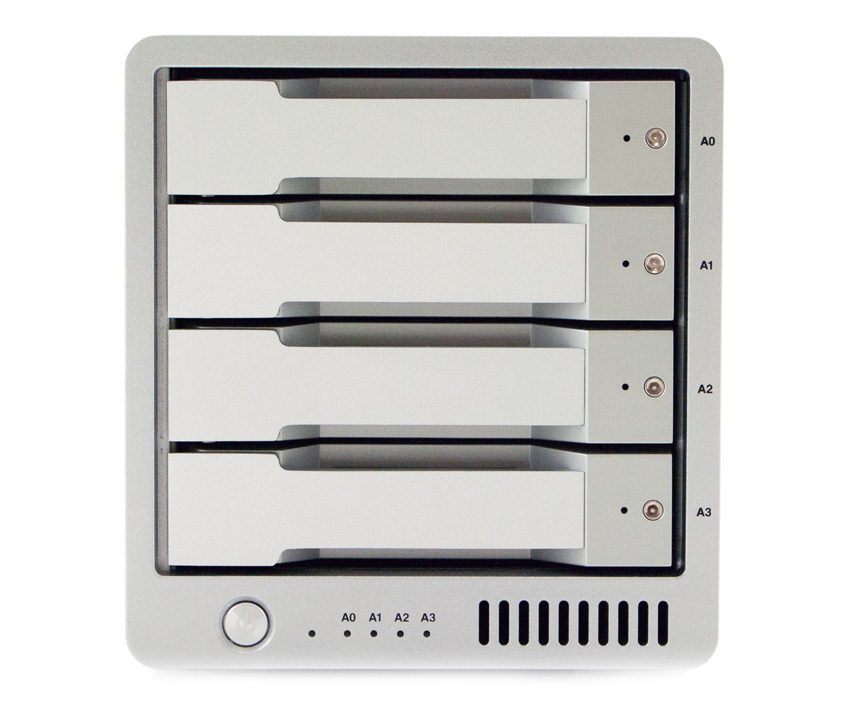 The front panel allows for easy access to the drives. To add or remove the bays, users simply have to unlock the bays with a key (the drive module will pop open) and pull the drive out from the enclosure. The ability to easily lock the drives in is definitely a welcomed feature for businesses; we had no trouble using the locking mechanism. 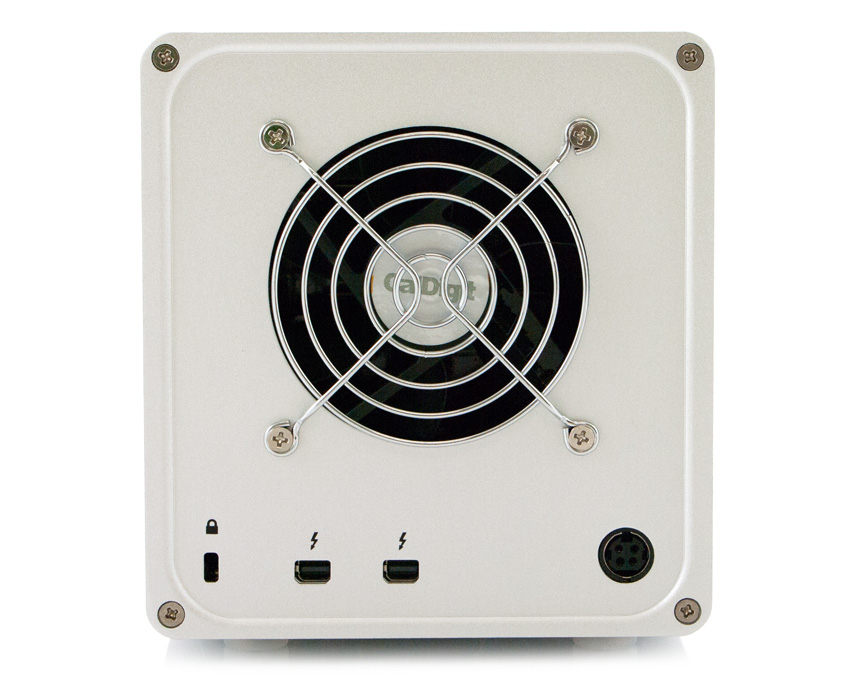 The front side is also host to the power button as well as various light indicators including the Power, Status LEDs. A ventilation grill is also located on the bottom right. The back panel shows the dual Thunderbolt 2 ports, AC power in, an 80 x 80 x 25mm exhaust fan, and a Kensington lock.

The software is very minimalistic, but powerful and very useful. We had no trouble accessing the status of our RAID configurations and were able to switch modes very easily. 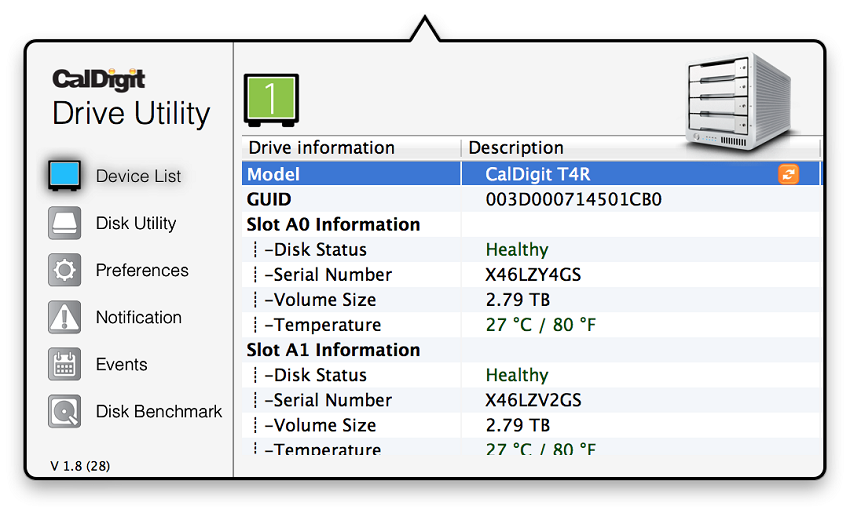 CalDigit Drive Utility Software CD in bundled with the T4 packaging, though the installer can also be downloaded from www.caldigit.com/support.asp, which also installs the drivers necessary to operate the T4 Performance. The offering is one of the more comprehensive on the market, enabling monitoring of the devices, drive health, RAID management and so on.

For performance, we measured transfer speeds from the CalDigit T4 in both RAID0 and RAID5 HDD configurations, which were connected to a current generation MacBook Pro that supports Thunderbolt 2 using the Blackmagic Disk Speed Test with a 5GB test file. The T4 we have is configured with 4x 3TB Toshiba DT01ACA which are billed as low-power 7K spindle speed drives. Of course Cal Digit offers a wide variety of drive configurations in the T4.

Comparables used for this review:

When measuring the HDD transfer rates, the T4 posted read and write speeds of 749.5MB/s and 697.2MB/s respectively in RAID0, which was inline with what was quoted by CalDigit (only off by 0.5MB/s). Switching to our RAID5 configuration, the T4 posted 529.1MB/s read and 537.5MB/s write. 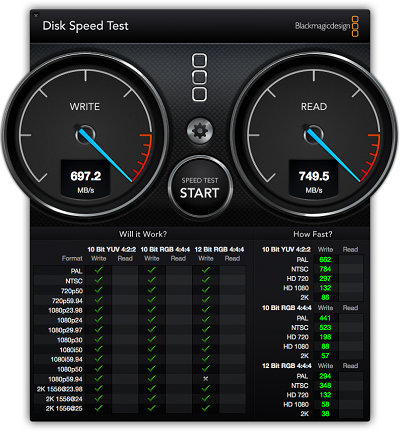 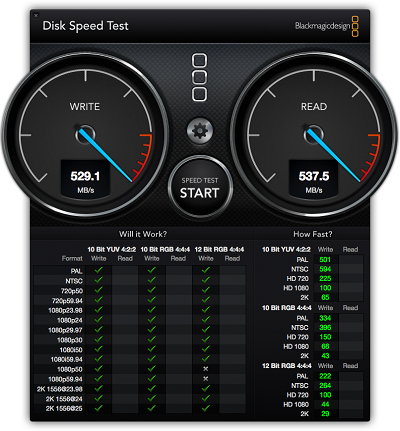 As for the comparables, the G-Technology G-SPEED Studio 4-bay and LaCie 5big (5-bay) were also first tested in RAID0, the former which posted transfer speeds of 628.2MB/s and 745.9MB/s in read and write, respectively. The LaCie 5big had 805.1MB/s in read and 789.1MB/s in write. When tested in a RAID5 configuration, the Studio boasted read transfers at a rate of 487.8MB/s while writes hit a rate of 576.8MB/s. The LaCie 5big posted read speeds of 542.1MB/s, while write activity posted 758.3MB/s, a score which was barely weakened from the RAID0 mode.

The CalDigit T4 is a four-drive direct attached desktop storage solution featuring Thunderbolt 2 technology and offers professionals upwards of 20TB in HDD configurations, with high-performance SSD configs also available. As is the case with other Thunderbolt solutions, the CalDigit device has the ability to daisy chain with other T4s using a single Thunderbolt port on a computer. It also allows users to connect a 4K monitor as part of their daisy-chain. We found the T4 to be a very nice looking enclosure in addition to being very rugged due its die-cast aluminum chassis. It looked pretty good beside our Mac Book Pro while we were putting it through our tests. CalDigit also bundled the T4 with their management software called CalDigit Drive Utility, in which we found short and to the point, as it gave us useful information pertaining to the drive SMART status and RAID status and quick to be able to change RAID modes. We were impressed with its functionality and simplicity.

Performance-wise, CalDigit’s new T4 Thunderbolt 2 interface allowed it to post some impressive numbers for its class during our benchmarks. In our Mac-centric 5GB file transfer test, the T4 offered HDD reads speeds of 749.5MB/s  and write speeds of 697.2MB/s, which was almost exactly what CalDigit quoted. The T4 can certainly compete with the best of the other Mac-centric storage solutions and of course can be paired with SSDs should the user require a little more throughput.

With upwards of 20TB, speedy performance, and a rugged build, the CalDigit T4 is an ideal storage companion for media enthusiasts and professionals that work primarily with Mac platforms.