The Corsair Neutron Series XT SSDs are designed to provide a happy median between high performance enthusiasts and multimedia professionals. Corsair indicates that it can achieve this by offering consumers high performance, high capacity, high consistency, and high reliability. These are definitely a line of SSDs that have a very broad demographic, as they targeted towards to essentially any type of use case that demands performance.

The Corsair Neutron Series XT SSDs are designed to provide a happy median between high performance enthusiasts and multimedia professionals. Corsair indicates that it can achieve this by offering consumers high performance, high capacity, high consistency, and high reliability. These are definitely a line of SSDs that have a very broad demographic, as they targeted towards to essentially any type of use case that demands performance. 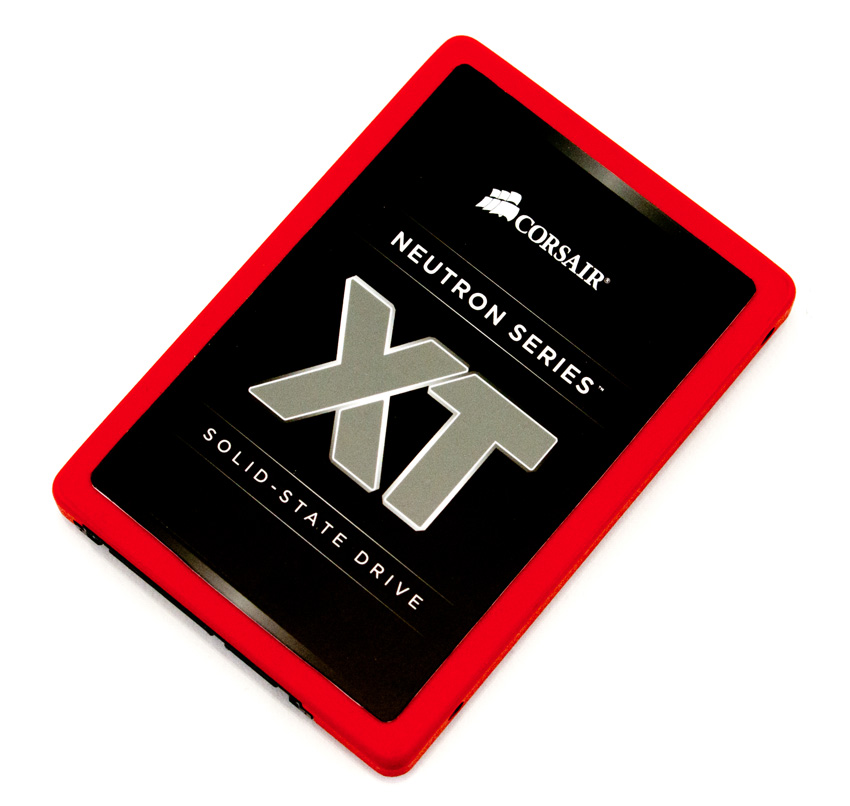 The biggest draw to the Neutron SSDs is the new Phison PS3110-S10 controller that it is equipped with. As such, Corsair has put forth a lot of its focus and marketing on what the new controller is capable of and a very detailed list of features. Built from the ground up, the Phison PS3110-S10 sports a Quad-core CPU, with three cores dedicated to managing flash and maintaining performance, quoting speeds of up to 560MB/s read and 540MB/s write as well as 100K IOPs on read and 90K IOPs on write. In addition, the Phison controller offers end-to-end data path protection with its enterprise level CRC/ECC, which corrects internal soft errors and detects and corrects any errors that might occur between the DRAM, controller, and flash.

The Neutron Series XT SSD is compatible with Corsair SSD Toolbox, which gives users the ability to monitor its health, perform security wipes, and to install updated firmware as needed.

Corsair Neutron Series XT SSDs come in capacities of 240GB, 480GB, and 960GB priced. All drives are inclusive of a 3-year warranty.

The Neutron Series XT SSDs use a different design compared to other Corsair drives such as the Neutron, Neutron GTX, and Force LS. The XT is going for a much more minimalistic look-and-feel, with only the Corsair Logo and model name located on the front. The new design is also much nicer due to its cleaner look in addition to the red wrap-around, which is also a nice touch. Even though you rarely see drives during its life cycle, it’s refreshing to see a bit of effort put into their design. 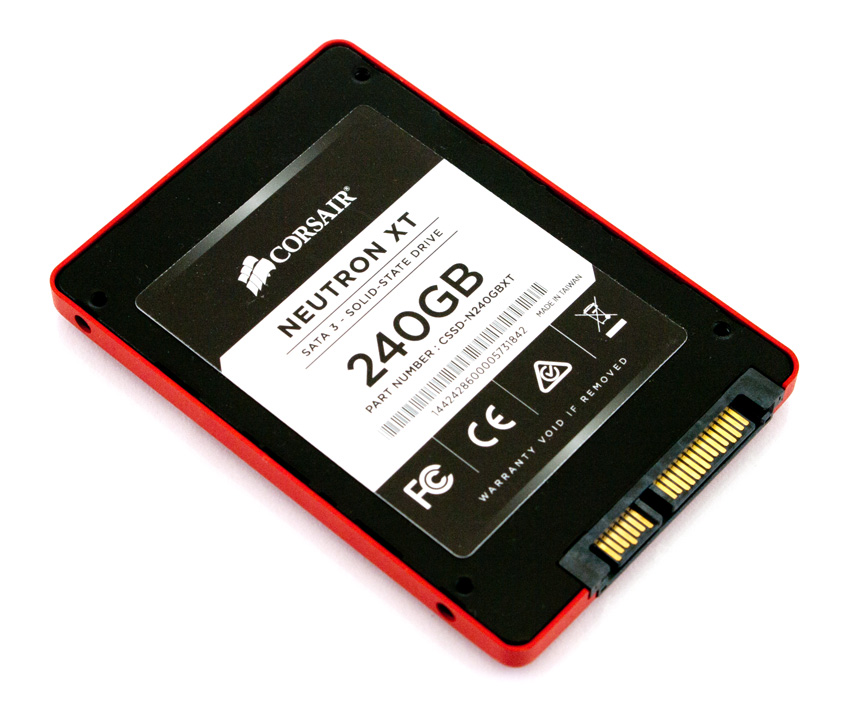 The backside Neutron Series XT displays all the information users/businesses need to know, including serial numbers, model, barcode, PNs, and so forth. 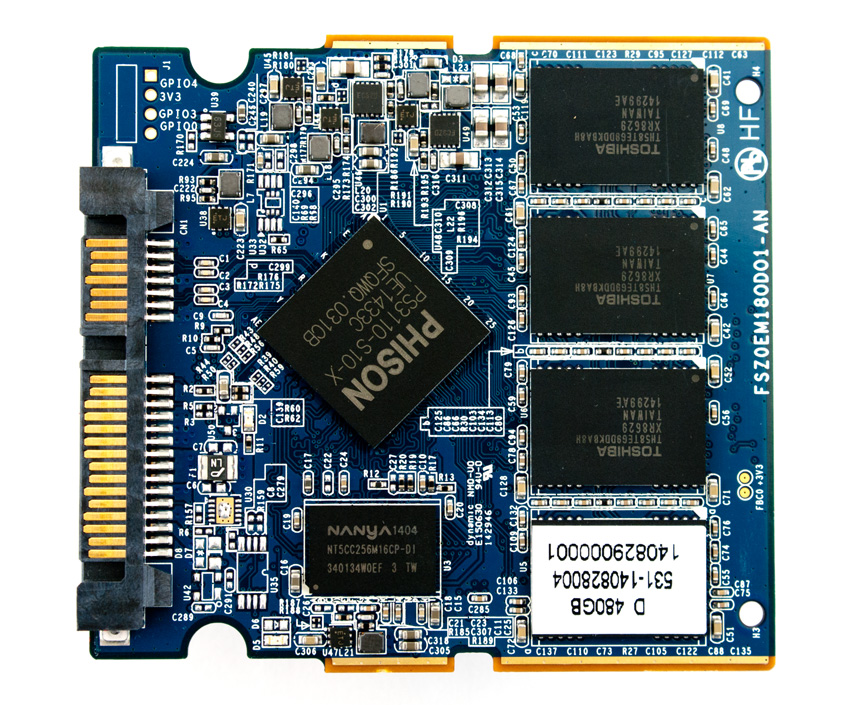 Each side profile has two screw holes, as well on each corner of the bottom of the drive, which is standard among most SSDs. This allows the drive to be easily mounted. The drive comes in a 2.5″ form factor at 7mm in height, which enables it to be compatible for many applications such as laptops and ultrabooks. 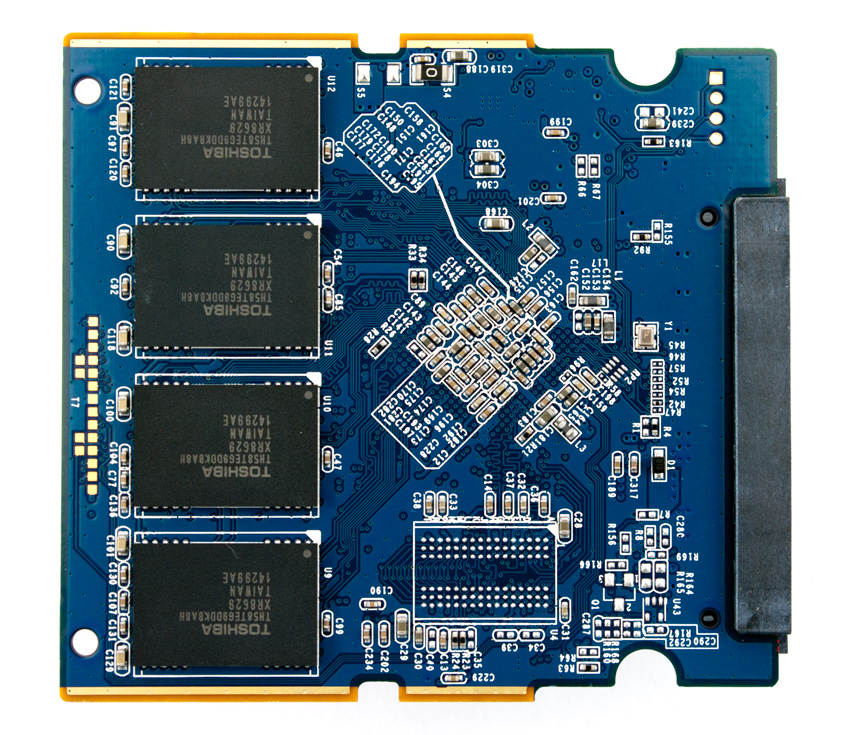 The Neutron Series XT utilizes a Phison PS3110-S10 controller (opposed to the LAMD controller used in the previous iterations of the Neutron SSDs) and Toshiba A19 MLC NAND.

Our first test measures 2MB sequential performance. Here the Corsair Neutron XT fared very well, with scores that placed at the top of the leaderboard. The 240GB model had the best results, boasting 516.1MB/s read and 475.5MB/s write with the higher capacities (480GB and 960GB) hot on its trail.  The top read performer was the Samsung 850 Pro with 517.9MB/s, with the OCZ Vertex taking top write performance with 480.3MB/s.

Our random transfer performance of the same file size, show the Neutron XT lagging a bit behind in the read column, though their write performance was right up there. The 960GB model showed the best read performance of the Corsair drives by a noticeable margin (403.5MB/s) while the 480GB model had the best write speeds (476.9MB/s). The top read and write performers were once again the Samsung 850 Pro (483.2MB/s) and OCZ Vertex 460 (478.0MB/s), respectively.

When comparing the average write latency between each competing drive, the Corsair drives showed the worst average latency, with the 240GB model taking last place. The 240GB model also had a poor max latency reading with 52.04ms, though the 960GB and 480GB models had two of the best results in this category. 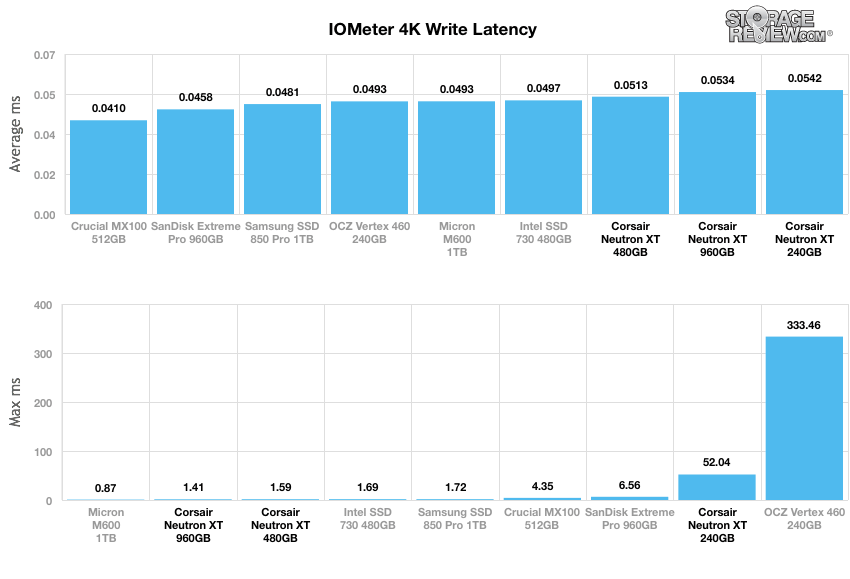 We are now looking at workload with 100% write activity that scales from 1QD to 64QD. Here, the Corsair drives took the top 3 spots, with the 240GB model taking first place (17,764 IOPS burst, ending at 92,150 IOPS). The two other Corsair Neutron XT capacities were close behind. 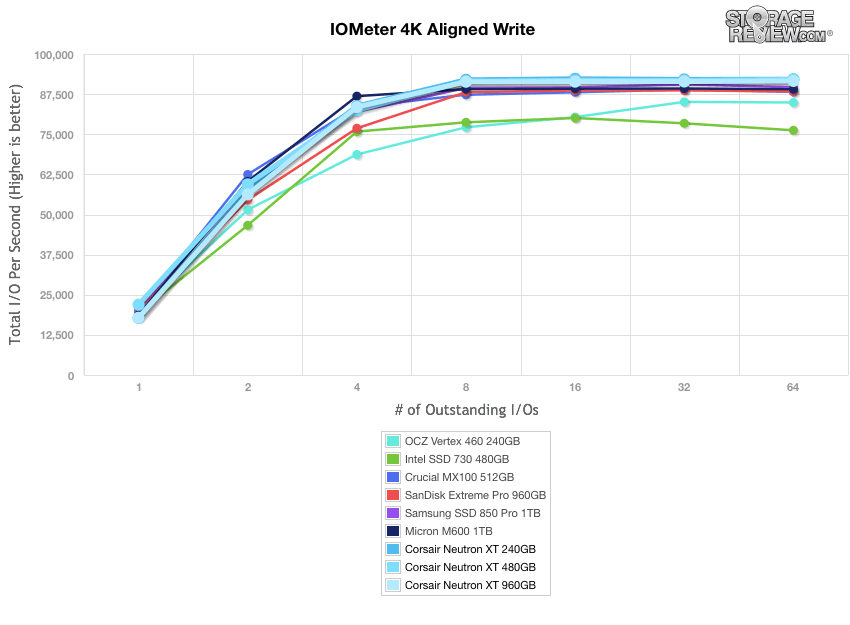 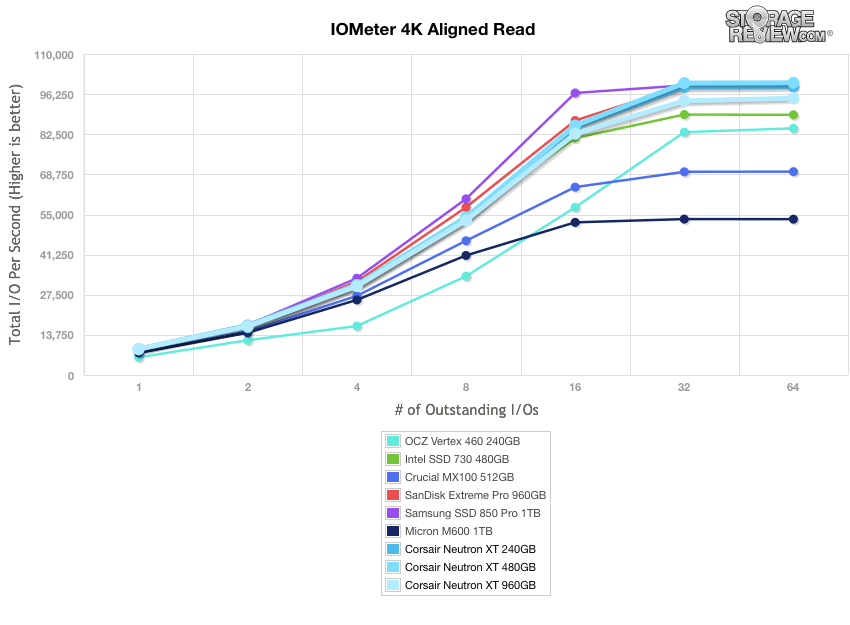 The first is our database profile, with a 67% read and 33% write workload mix primarily centered on 8K transfer sizes. All Corsair capacities showed poor performance, ranking at the bottom of the charts with essentially half the IOPS of the next best drive. 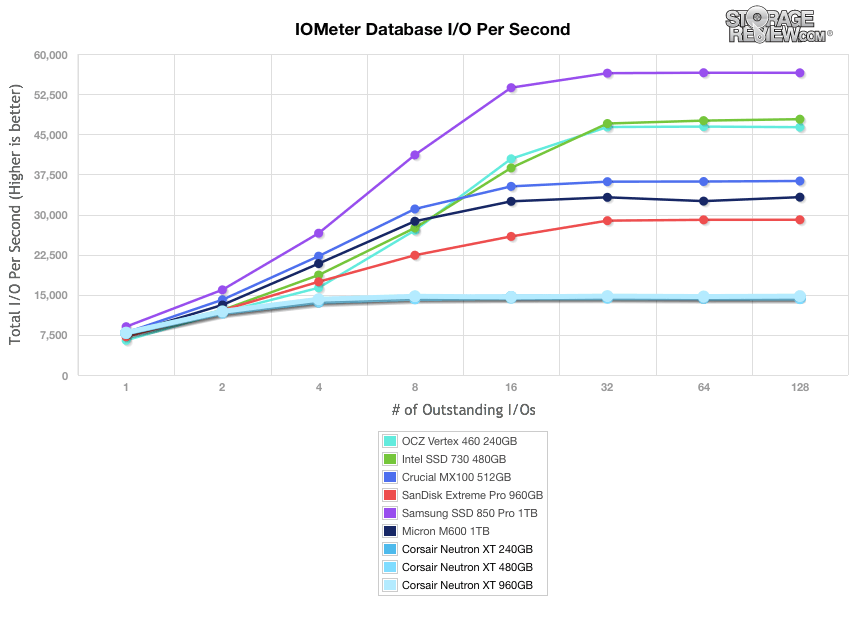 The Corsair drives picked up their performance significantly in our a web server test, which has 80% read and 20% write workload spread out over multiple transfer sizes ranging from 512-byte to 64KB.  All models ranked in the upper middle part of the pack, all of which hovered around the 14,000 IOPS mark by QD128. 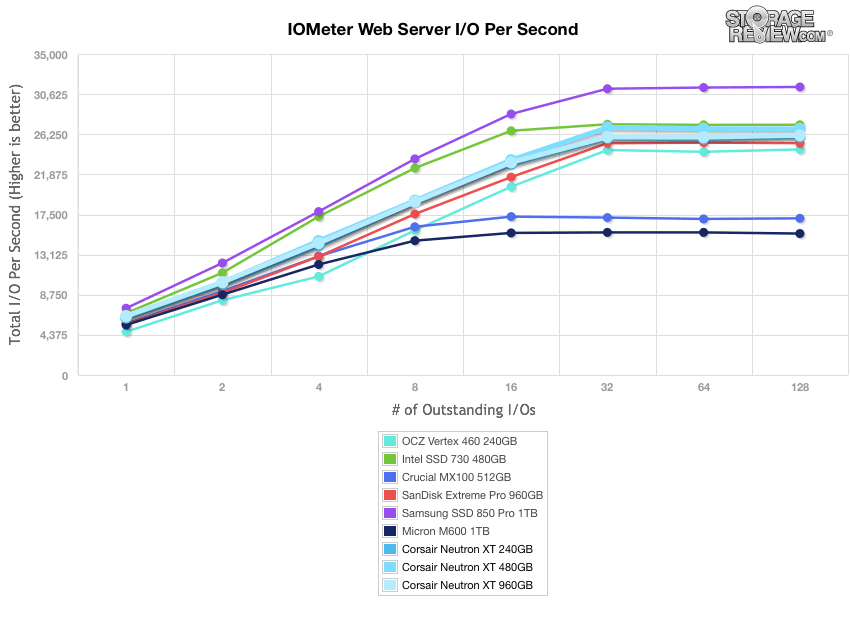 In our file server profile, which is read-only with a spread of transfer sizes from 512-byte to 512KB, the Corsair drives went right back to being the bottom three drives with virtually identical performance to that of the database profile 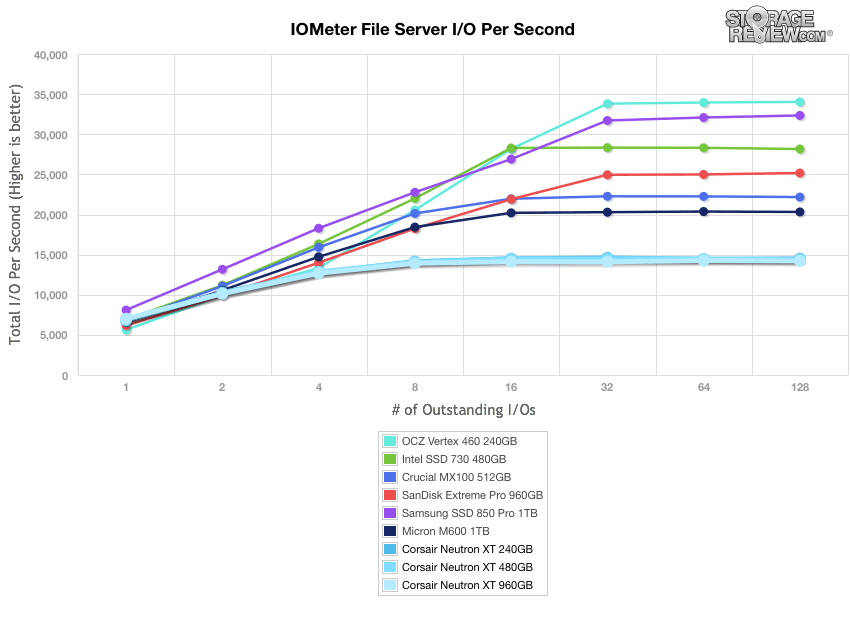 Our workstation activity (20% write and 80% read mixture using 8K transfers) told a similar story, with the Corsair drives remaining at the bottom of the pack by a significant margin, hanging around the 17,000 IOPS mark by QD128. 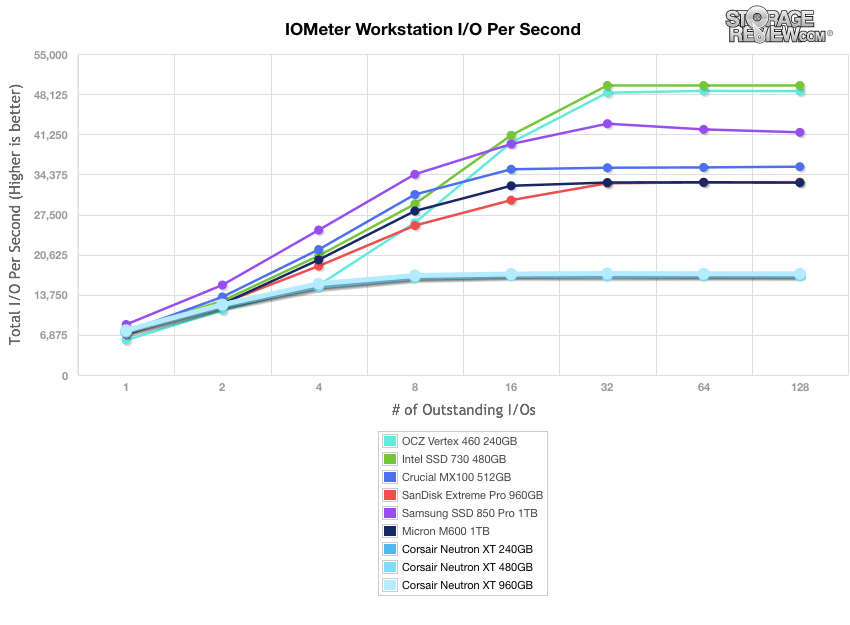 In our HTPC profile, the Corsair drives offered top-in-class performance taking the top three spots on our leaderboard. These scores were headlined with the 240GB model taking first place in IOPS (9,706.4), average speed (448.29MB/s) and average latency (0.8ms) by a noticeable margin. 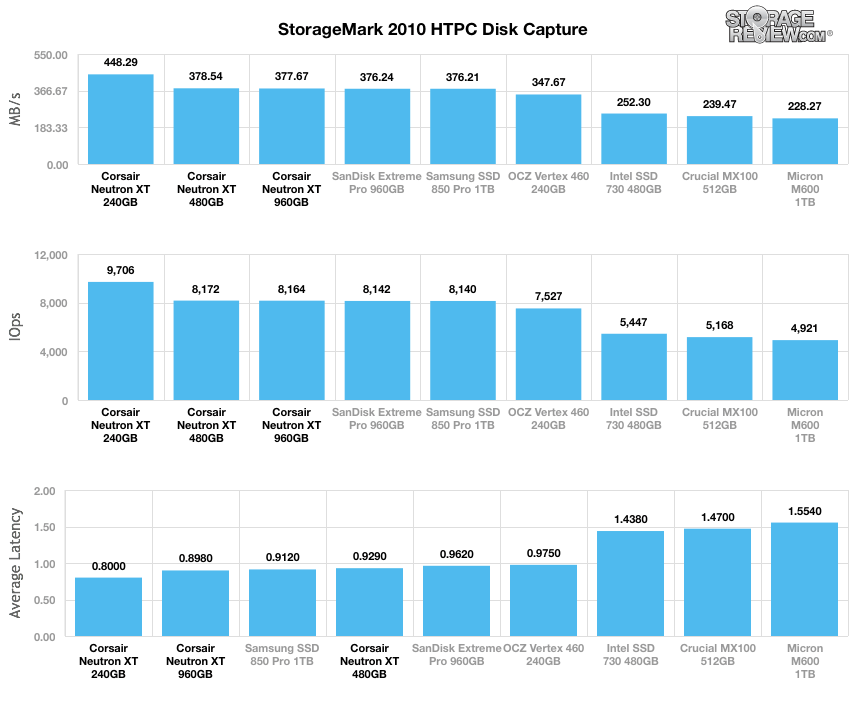 In our Productivity trace, the Corsair drives picked up where they left off with top ranking results. The 240GB model was first place again, clobbering its competition in IOPS (13,487.5), average speed (397.49MB/s) and average latency (0.557ms). 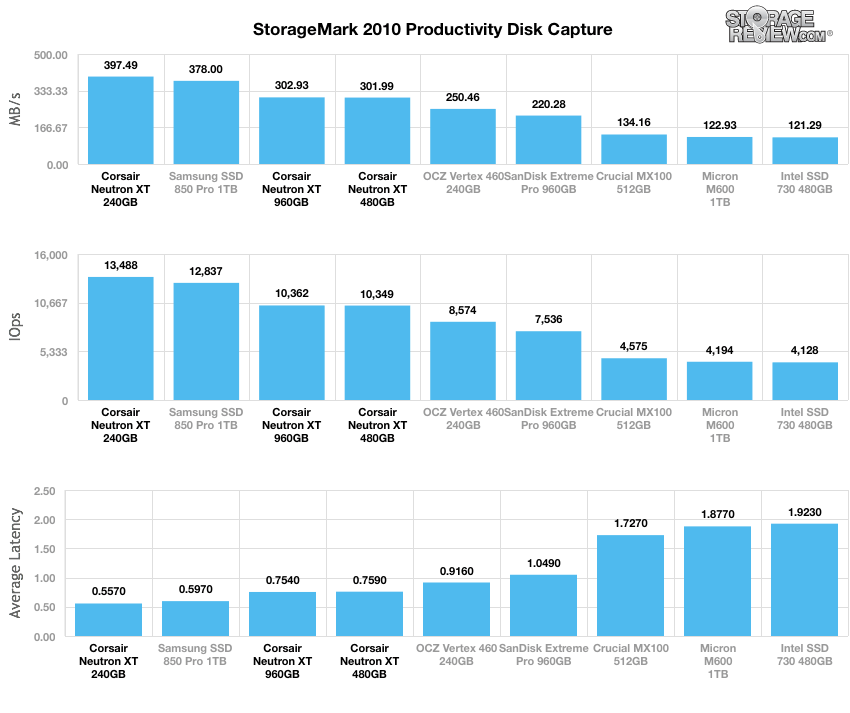 In our read-intensive Gaming trace, it’s no surprise that the Corsair Neutron XT 240GB drive boasted the best overall results once again, though the other two capacities slowed down a bit compared to the other profiles. The 240GB model took top spot in IOPS and average speed with a second place showing in overall average latency. 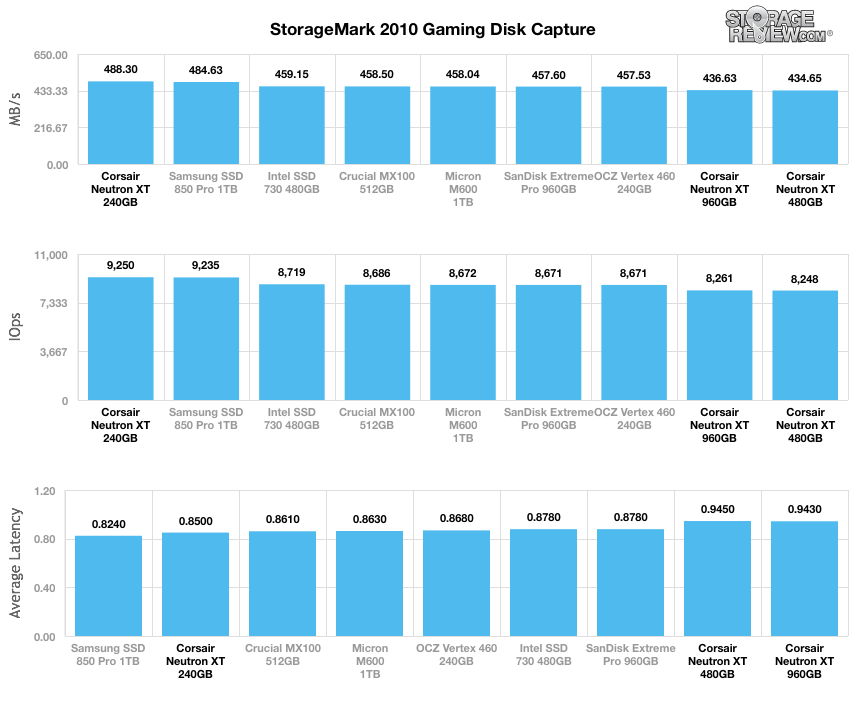 The Corsair Neutron Series XT is the company’s newest line SSDs and a much needed boost to their portfolio of high performance drives. The Neutron Series XT leverages Toshiba A19 MLC technology and is equipped with the new Phison PS3110-S10 controller, which allows Corsair to quote impressive performance numbers with up to 560MB/s read and 540MB/s write as well as a hefty 100K IOPs. The drive also offers a lot of control features including drive monitoring, secure wipe, and firmware update functionality as well as reliability features including Cosair’s End-to-end Data Path Protection, SmartECC, SmartRefresh, and SmartFlush, all of which intelligently work together to ensure the integrity of user data.

The Corsair Neutron Series XT also boasts some pretty serious performance as well, particularly in our consumer real-world benchmarks. Here, the Neutron drives posted impressive numbers and consistently held positions at the top of our leaderboard across all capacities. This was most evident with the 240GB model in our productivity trace, where it annihilated the competition with 13,487.5 IOPS, 397.49MB/s, and an average latency of 0.557ms. The 240GB model was also the best drive in the other real-world benchmarks. In addition, the Corsair drives fared very well in our other consumer tests, including 2MB sequential transfer benchmark, usually hovering around the top of the charts throughout, though its average latency and random transfer rates were a bit below par. The only time it truly struggled was when we put it through our series of server mixed-workloads, where it placed well at the bottom in all of our profiles with the exception of the web server test. Historically this has been a problem for Phison controllers, but to be fair, the drive is engineered entirely for client use.

Overall we were very impressed with the Corsair Neutron Series XT SSDs, as they consistently offered top-in-class performance in all capacities in addition to a plethora of reliability and drive control functionality and very low power consumption.

The Corsair Neutron Series XT offers enthusiasts and media professionals a high-performance drive that delivers very well in the client-centric use cases this SSD is designed for.