The QNAP TS-253 Pro is a two-bay NAS optimized for small offices, workgroups and enthusiasts. It is a feature-intensive system that provides transfer speeds of up to 415MB/s, DDR3L RAM of up to 8GB (with upgrade), military-grade AES 256-bit encryption technology (70MB/s), video transcoding, third-party application compatibility, and virtualization. The TS-253 Pro supports VMware, Citrix, Microsoft Hyper-V and Windows Server 2012 and can be scaled up to 60TB with QNAP’s UX-800P expansion enclosure. QNAP loaded the TS-253 Pro with a 22nm quad-core Intel Celeron 2GHz processor as well as 512MB of flash memory.

The QNAP TS-253 Pro is a two-bay NAS optimized for small offices, workgroups and enthusiasts. It is a feature-intensive system that provides transfer speeds of up to 415MB/s, DDR3L RAM of up to 8GB (with upgrade), military-grade AES 256-bit encryption technology (70MB/s), video transcoding, third-party application compatibility, and virtualization. The TS-253 Pro supports VMware, Citrix, Microsoft Hyper-V and Windows Server 2012 and can be scaled up to 60TB with QNAP’s UX-800P expansion enclosure. QNAP loaded the TS-253 Pro with a 22nm quad-core Intel Celeron 2GHz processor as well as 512MB of flash memory. 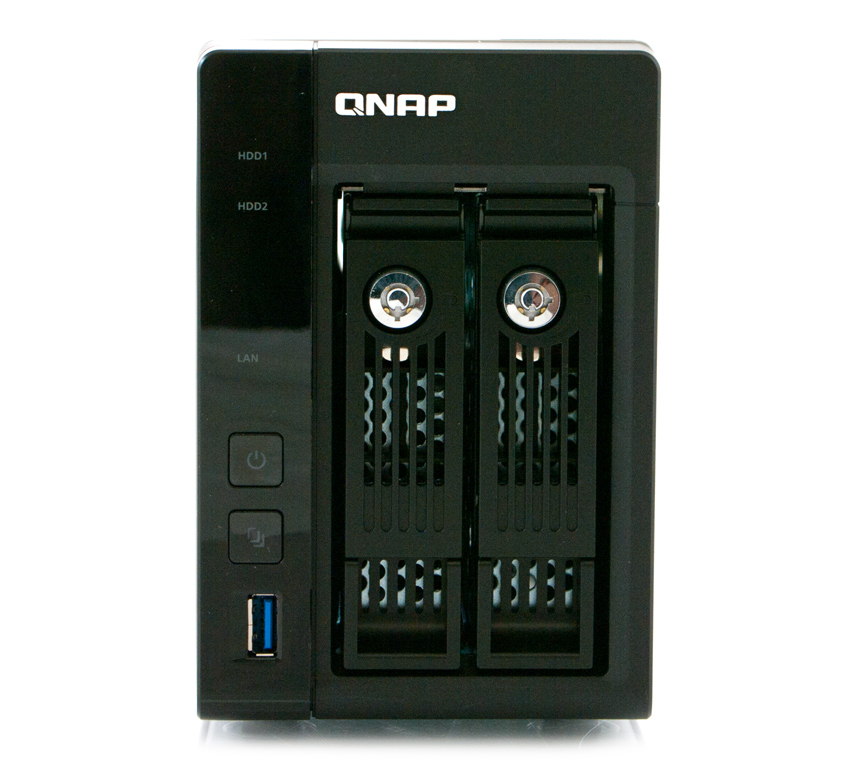 This NAS is geared towards small business applications, especially those in which frequent travel is involved; Qsync automatically synchronizes updates across multiple devices, which is further supported by its Qfile app (for remote streaming or downloading) and support for multiple third-party backup, management, and entertainment apps. Many more the features included with the TS-253 Pro lend themselves to remote use, including RTRR (real-time remote replication disaster recovery) and IT Management Station (which centralizes the management of the applications operating with the TS-253 Pro). It is sensitive to potential security needs as well; in addition to its AES 256-bit encryption (which allows administrators to control access of individual users), it supports Surveillance Station, which provides real-time monitoring and compatibility with over 2,700 IP camera models. There is also support for various enterprise-grade backup solutions, including Time Machine and NetBak Replicator (as well as Acronis True Image and Symantec Backup Exec if a third-party backup program is desired). QNAP's Virtualization Station lets multiple virtual machines run simultaneously, and server loading can be virtualized with VMware VAAI and Microsoft ODX to increase operational efficiency.

If the TS-253 Pro is connected to a keyboard, mouse, and monitor, it can basically be used as a PC due to QvPC consolidation of VM and cloud integration, media transcoding, and support for all of the major browsers. Alternatively, it could be connected to a compatible device via HDMI through its HD Station application for large video file viewing (instead of streaming). These features makes it convenient for its stationary use, while maintaining all of the features that make it perfect for traveling professionals. There is not much of a learning curve with respect to its interface; it seems to have been designed to resemble a Mac OS layout, with a user-friendly layout and simple management.

QNAP seemed to focus more on features than design; the TS-253 Pro basically has a standard, if generic, NAS appearance. The front (black) has standard lockable vertical drive bays, which are vented and slightly offset to the right. To the left of the bays (bottom to top) is a USB 3.0 port, one-touch USB sync button, power button, LAN indicator LED, and two status LEDs corresponding to the two drives. There is modest branding above the drive bays, and the sides of the device are barren aluminum. 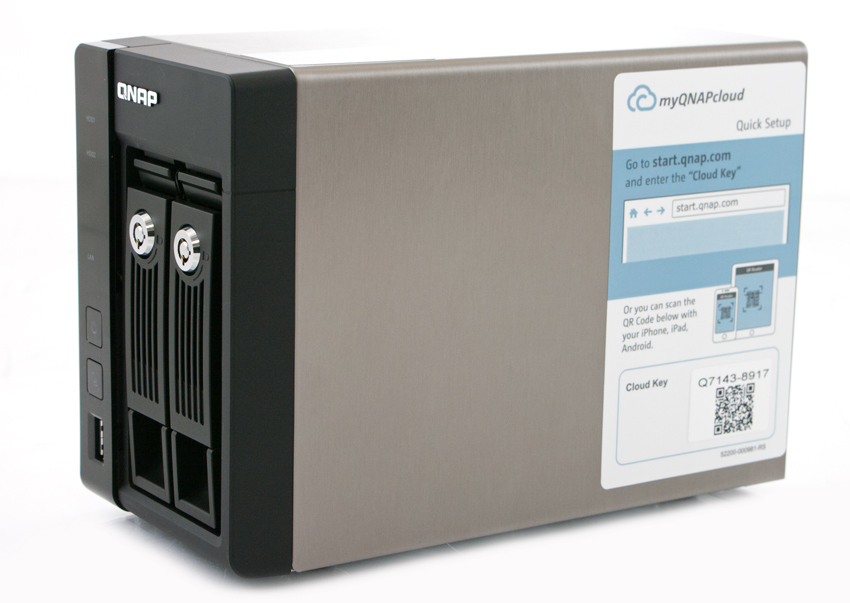 The rear of the device is also plain aluminum, with a large fan to the left of the interfaces. From top to bottom there is a reset button, HDMI port, two LAN ports, two USB 3.0 ports, and the power port. Below the fan is a small sticker with product information, to the left of which is a Kensington lock. 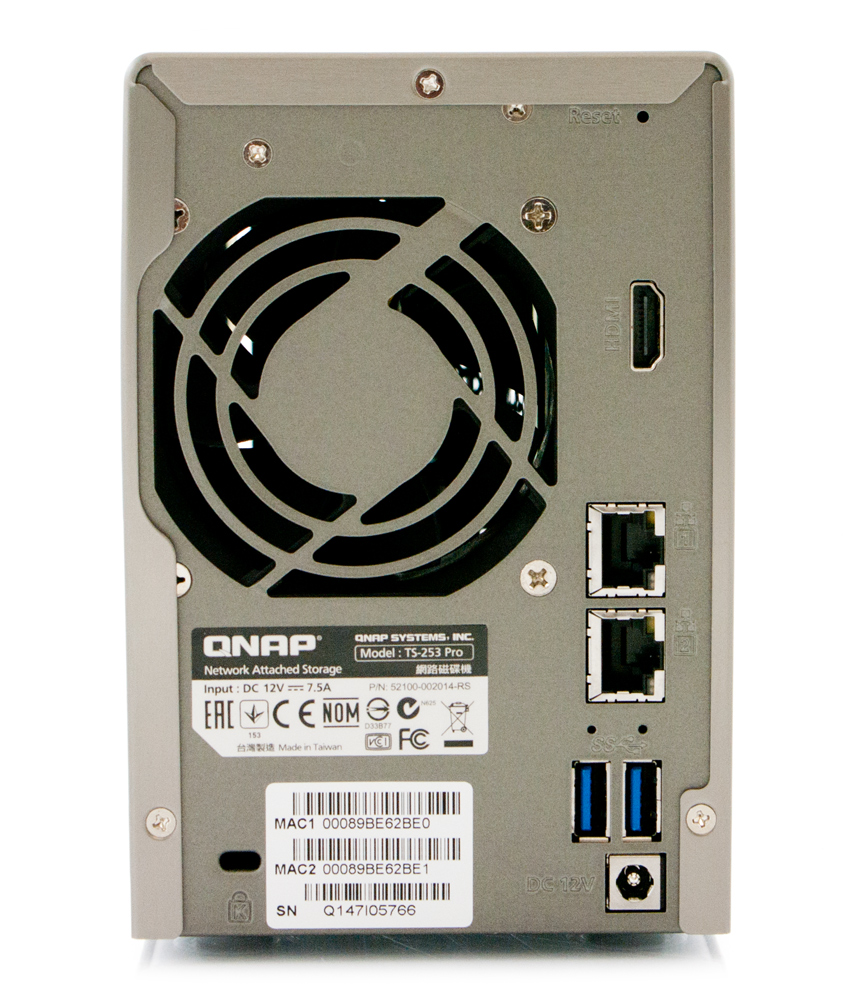 The side of the unit has an easy find sticker on it to make locating the NAS on your network easy. This is quite welcome when compared to other solutions that require a finder app to be installed on a PC.

Overall the TS-253 Pro interface is easy-to-use with straight-forward management options. There are lots of third-party apps available in the App Center, and users can quickly load their system with important applications under the "QTS Essentials" tab. 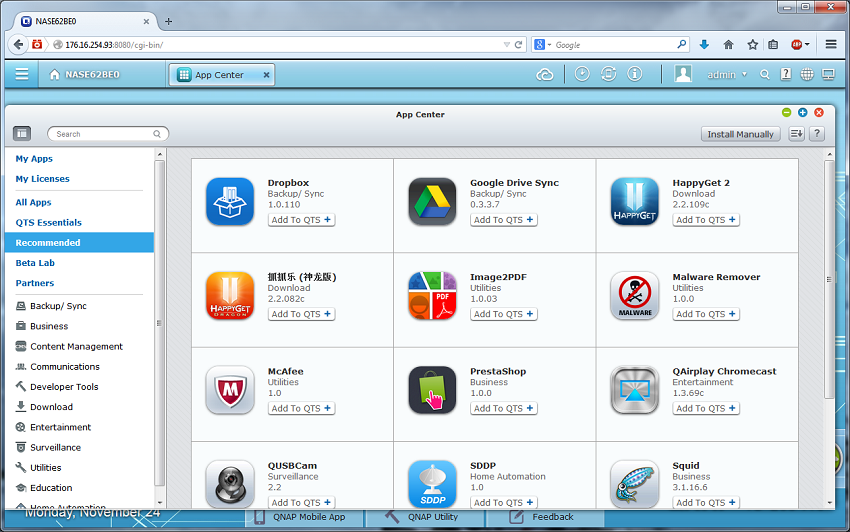 System and HDD health can be easily checked in the status bar, which also display details like temperature, scheduled tasks, storage use, CPU/RAM usage. 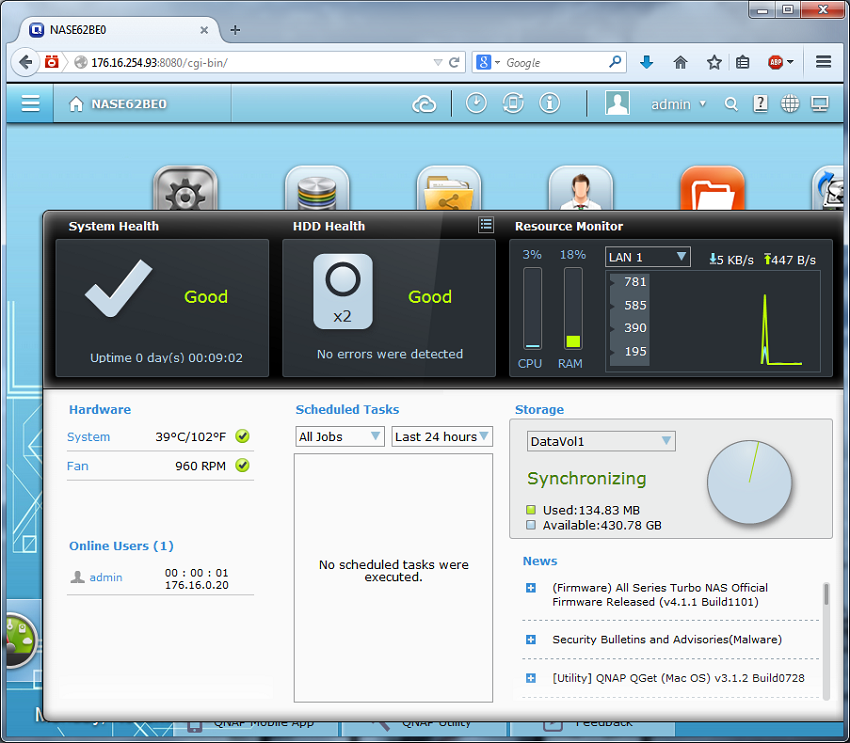 We tested both CIFS and iSCSI performance using two popular 3.5" 5,400RPM hard drives: the 6TB WD Red and 4TB Seagate NAS models. Both of the drives are suited to operate in NAS environments.

In order to fairly evaluate the performance of the QNAP TS-253 Pro we need an environment that ensures that it is the I/O bottleneck rather than the network. Therefore this review employs a Lenovo ThinkServer RD240 running multiple Windows Server 2012 VMs in an ESXi 5.1 environment connected via a quad-port Intel i350-T4 NIC through a Netgear ProSafe GS752TXS switch.

The QNAP loaded with WD Red drives configured in both iSCSI and CIFS clearly dominated the write portion (with a slight edge in CIFS with 442 IOPS). However, they fell short in read functions, which were fastest in the Synology DS713+ loaded with Reds and configured in iSCSI (496 IOPS). The TS-253 Pro loaded with Seagate NAS HDDs performed the slowest overall.

There was a larger margin separating CIFS from iSCSI for the TS-253 loaded with Red HDDs in max latency (1,876ms vs. 4,222ms, respectively for writes), the former of which is the overall leader in write functions. All of the DS713+ configurations dominated the TS-253 Pro configurations in read activities (the overall fastest was loaded with Seagate NAS HDDs and configured in CIFS).

The CIFS-configured DS713+ systems were the clear leaders in read consistency, reaching only 62.7ms with Seagate drives. The TS-253 Pro (Reds, CIFS) was the most consistent in terms of write functions, but by a smaller margin (469.4ms).

Our next benchmark measures 100% 8k sequential throughput with a 16T/16Q load in 100% read and 100% write operations. The QNAP systems were much faster than the DS713+ systems in both read and write. There was a slight edge for CIFS in write functions (28,342IOPS with Seagate drives) and iSCSI for read functions (25,922IOPS with Seagate drives), but these were very slight.

Compared to the fixed 16 thread, 16 queue max workload we performed in the 100% 4k write test, our mixed workload profiles scale the performance across a wide range of thread/queue combinations. In these tests, we span workload intensity from 2 threads and 2 queue up to 16 threads and 16 queue. In our expanded 8k 70/30 test, we saw a fairly stable layout, with DS713+ configured in iSCSI (loaded with Seagate HDDs) leading overall. The fastest TS-253 Pro configuration was Reds iSCSI (which trailed only slightly below the top spot), and both configurations of TS-253 Pro loaded with Seagate drives were relatively slow. 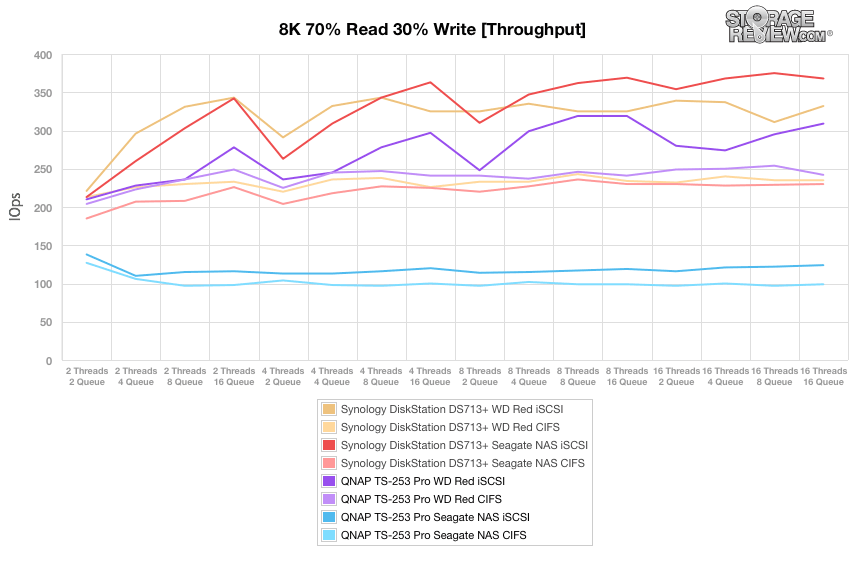 The standings for the average latency benchmark were exactly the same as those seen in throughput. 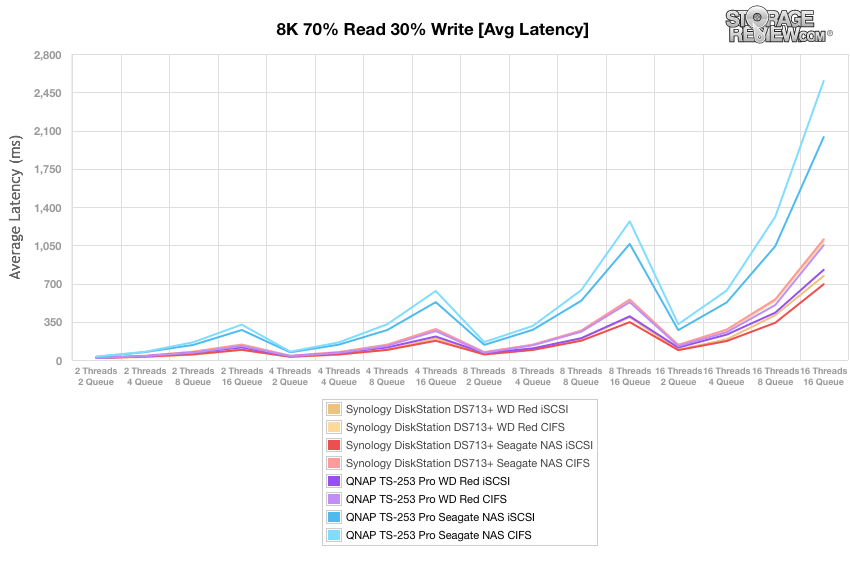 Maximum latency showed fairly different results, with the WD Red-loaded DS713+ (iSCSI) claiming the top spot closely followed by the TS-253 loaded with Reds and configured in CIFS. The highest latency was seen in DS713+ loaded with Reds (CIFS) and Seagate HDDs (CIFS). 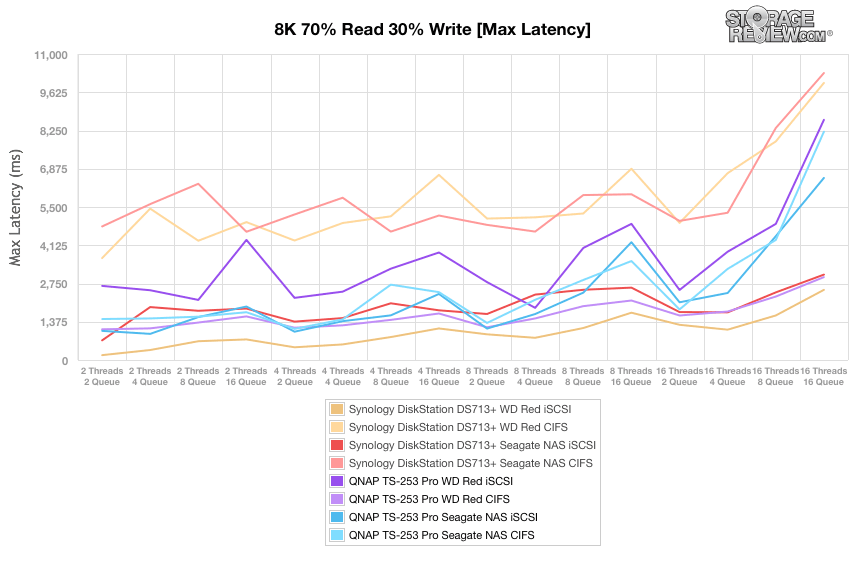 Standard deviation standings more closely resembled those of the average latency benchmark, although the overall leader was the DS713+ loaded with Reds (iSCSI). 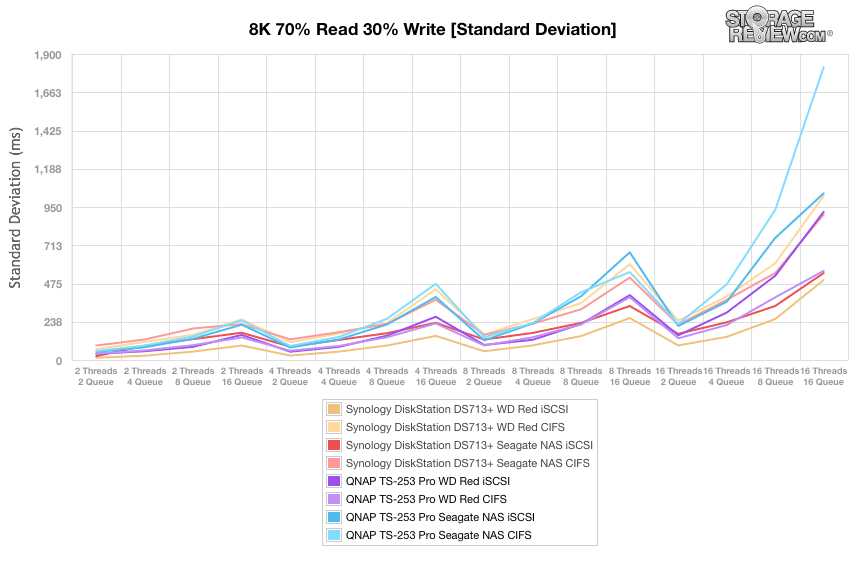 Our last test in our small NAS Synthetic Workload testing is the 128k test, which is a large block sequential test that shows the highest sequential transfer speed. When looking at the 128k performance of 100% write and 100% read activity, all of the TS-253 configurations had excellent performances, and were a class above the DS713+ for the most part. The top configuration in both read and write functions was the TS-253 Pro loaded with Reds and configured in iSCSI (although it was only slightly higher than any other given TS-253 Pro configuration).

The TS-253 Pro is a feature-intensive SOHO NAS with two drive bays that was optimized for SMB applications and enthusiast streaming needs. It would be ideal for a traveling professional or media-enthusiasts that still want to get plenty of features out of the stationary set-up; in addition to Qsync, mobile applications, remote real-time streaming, Surveillance Station, and IT Management Station, it can be configured as a PC as well as connected to an HDMI-compatible device for offline viewing. Virtualization Station allows users to run multiple virtual machines simultaneously, and several security features (including AES 256-bit encryption and several backup solution options) ensure that the data stored on the TS-253 Pro will remain secure. QNAP seemed to focus on the functionality of this system rather than its design, which is quite bland compared to most Synology devices.

For the most part the TS-253 Pro performed well compared to the Synology DS713+ when configured in CIFS, especially in write functions. In almost every instance, WD Red HDDs served the system better than the Seagate NAS HDDs (which was expected). The TS-253 Pro performed very well in the 128k benchmark, effectively dominating the DS713+ regardless of the QNAP configuration (although there was a slight favoring of iSCSI).

The QNAP TS-253 Pro is a great option for professional or media enthusiasts with limited capacity needs that still want a deep set of features and top-end performance profile.