While Crucial’s MX200 is a feature-heavy consumer SSD, the BX100 is catered more towards users looking to upgrade their systems to solid-state-based at a lower cost in exchange for a slight drop in performance. Crucial even admits that the “BX100 SSD isn’t the fastest drive on the market” on their website. With a price tag starting at roughly $70, this value-driven SSD is an attractive choice for consumers on a budget, who still want a better computing experience than what HDDs provide. The BX100 features a Silicon Motion SM2246EN controller, Micron MLC NAND and custom firmware that combine to boast ultra-low power consumption.

While Crucial’s MX200 is a feature-heavy consumer SSD, the BX100 is catered more towards users looking to upgrade their systems to solid-state-based at a lower cost in exchange for a slight drop in performance. Crucial even admits that the “BX100 SSD isn’t the fastest drive on the market” on their website. With a price tag starting at roughly $70, this value-driven SSD is an attractive choice for consumers on a budget, who still want a better computing experience than what HDDs provide. The BX100 features a Silicon Motion SM2246EN controller, Micron MLC NAND and custom firmware that combine to boast ultra-low power consumption. 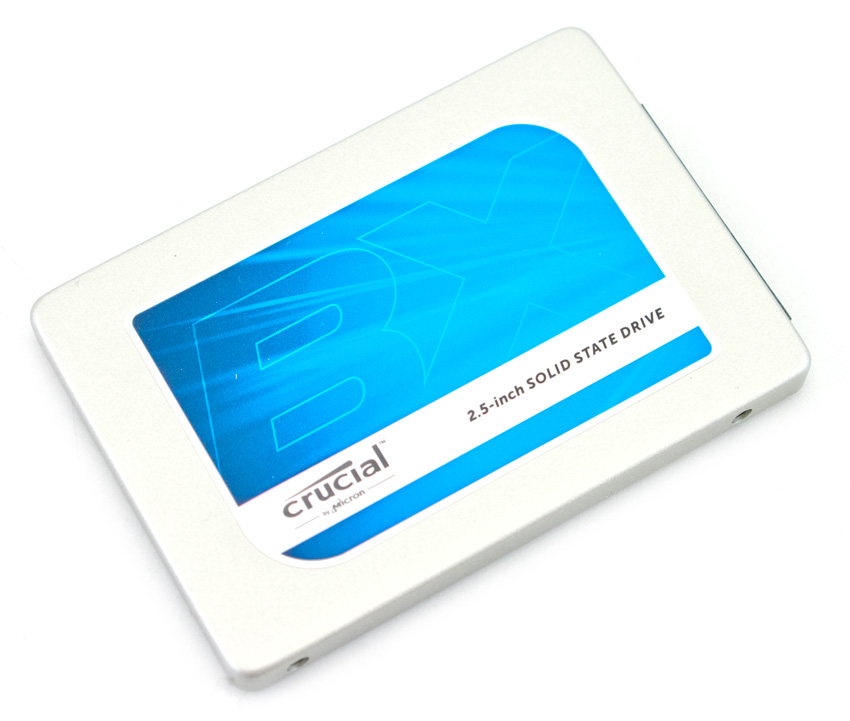 Crucial quotes the BX100 with sequential read and write activity up to 535MB/s and 450MB/s, respectively, for both compressible and incompressible data (compared to the MX200’s 555MB/s read and 500MB/s write), with random reads and writes reaching 90,000 IOPS and 87,000 IOPS, respectively. In addition, the Crucial BX100 has a reliability rating of 1.5 million hours, which is in line with the other Crucial drives (MX200, MX100). Crucial’s new SSD also uses Extreme Energy Efficiency technology, adding to its already low power consumption design and making it the company’s most efficient consumer drive. Beyond that, the BX100 is a bare bones drive feature-wise compared to Crucial’s M-class line of SSDs. These feature and performance reductions were made in the interest of keeping the price as low as possible.

As far as exterior design goes, the Crucial BX100 is virtually identical to the MX100. A label sticker is placed on the front of the SSD, displaying the Crucial logo, product brand, and the form-factor information. The enclosure of the BX100 itself is comprised of a smooth, yet rugged build.

The back panel of the Crucial drive displays information about the model. 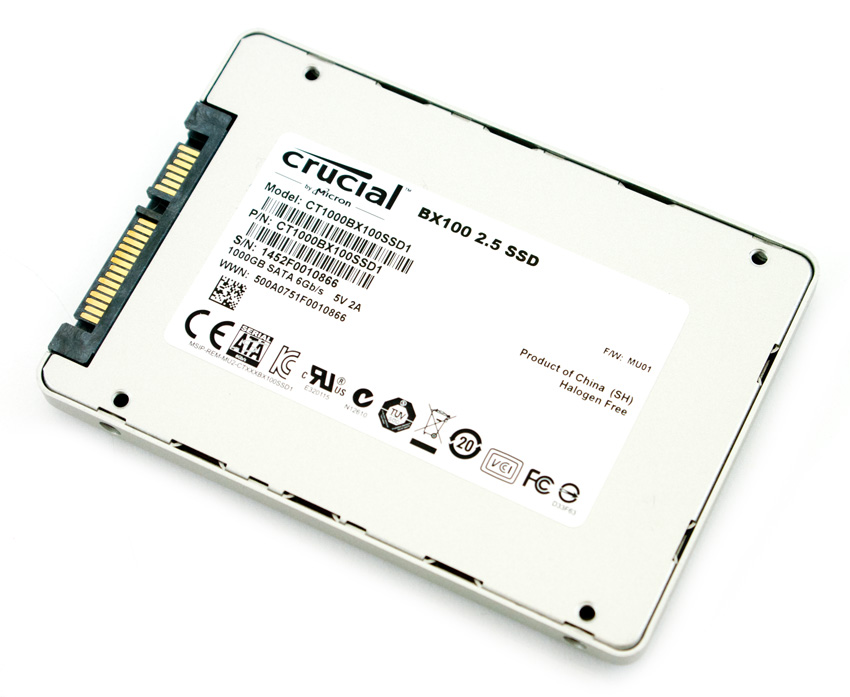 Each side profile of the BX100 has two screw holes, which allow the drive to be easily mounted. The BX100 model uses the slim 7mm (2.5″) profile, allowing it to fit inside a 7mm Ultrabook space, and comes with a 7mm-to-9.5mm adapter bracket. 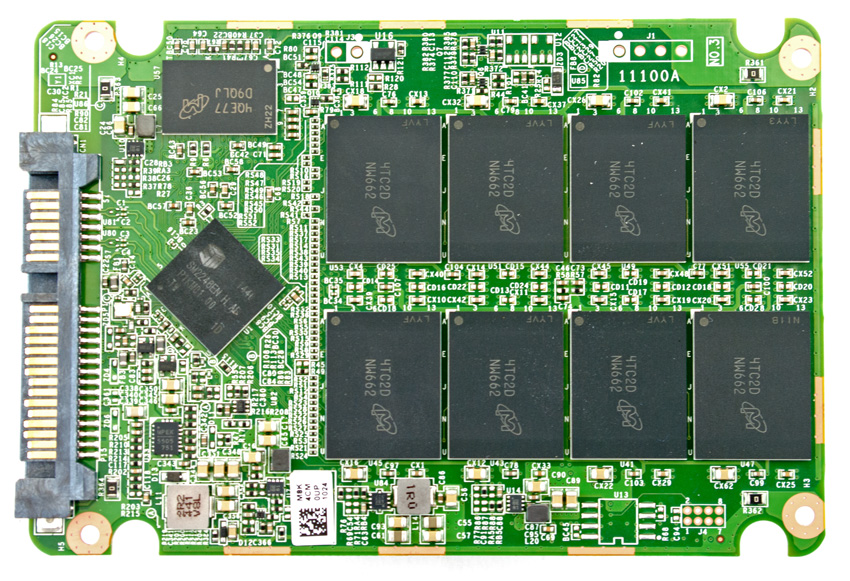 The BX100 requires slightly more effort to open than most drives, with the two halves snapped together with clips. The Crucial BX100 1TB model uses a Silicon Motion SM2246EN controller with 16nm 128Gbit NAND. 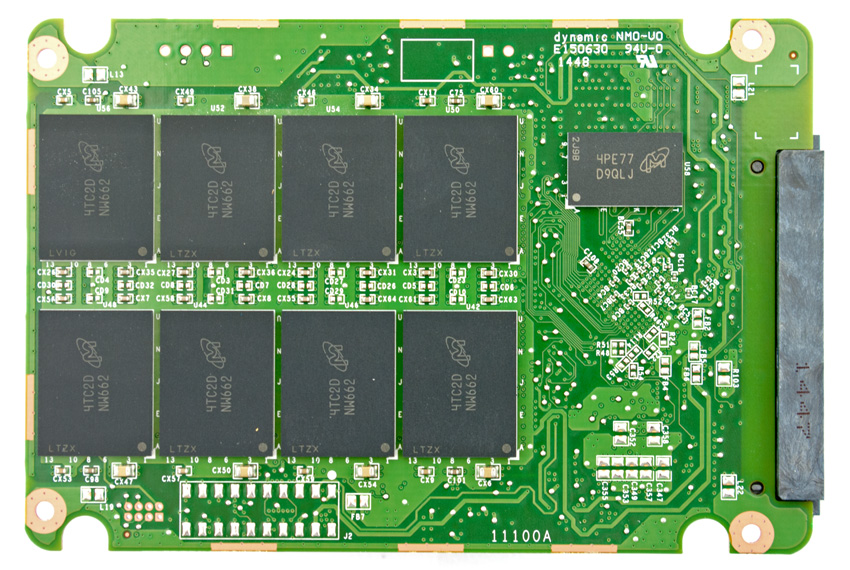 All consumer SSD benchmarks are conducted with the StorageReview HP Z620 Workstation. We compared the Crucial BX100 to following drives:

Our first test measures 2MB sequential performance. Here, the Crucial BX100 1TB posted a impressive 501.18MB/s read, though it had one of the slower write performances with 432.51MB/s. These results were good enough for first place on our leader boards, beating out all other Crucial drives as well.

Moving to our 2MB random transfer performance, the Crucial BX100 moved from first to last place, posting read and write activity of only 399.22MB/s and 433.77MB/s, respectively (compared to the MX100’s 482.32MB/s read and 450.59MB/s write). This is an expected result, as the Crucial BX100 is clearly marketed has an economical SSD.

Switching to smaller 4K random transfers, the BX100 continued its value-oriented random performance at 30.62MB/s read and 103.99MB/s write, placing it at the bottom of the pack. The top performer here was the Samsung 850 EVO with 38.44MB/s read and 115.67MB/s write.

When looking at 4K random throughput, the BX100 found itself in last place again with 7,837.57 IOPS read and 26,621.44 IOPS write. All Crucial drives performed poorly in this workload.

When comparing 4K latency between each mainstream consumer SSD, the BX100 placed at the bottom of the pack again, with an average latency of 0.0373ms and a high peak latency of 22.00ms. 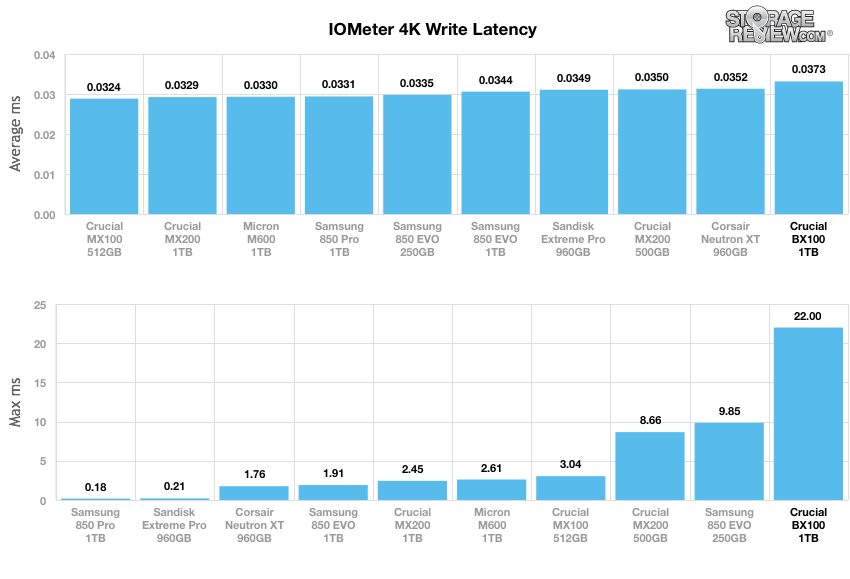 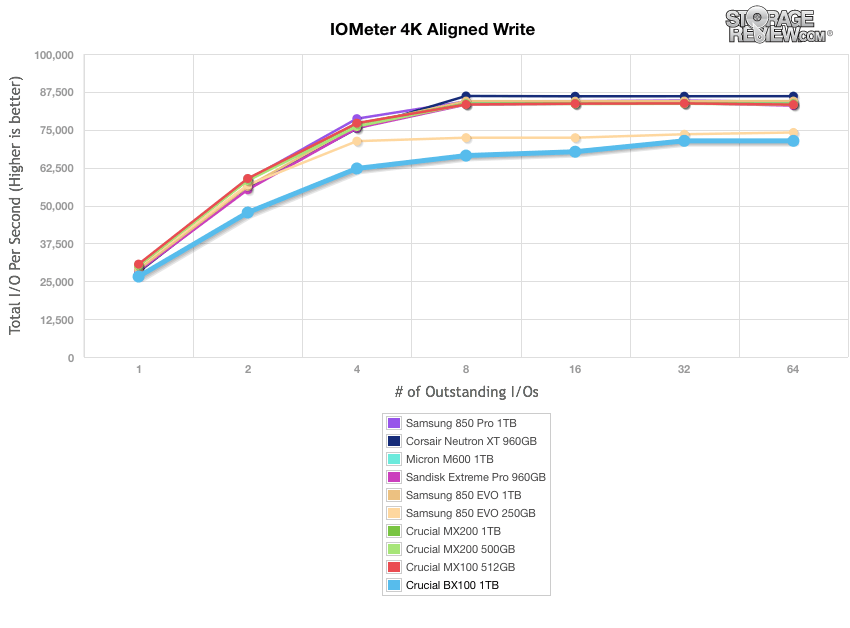 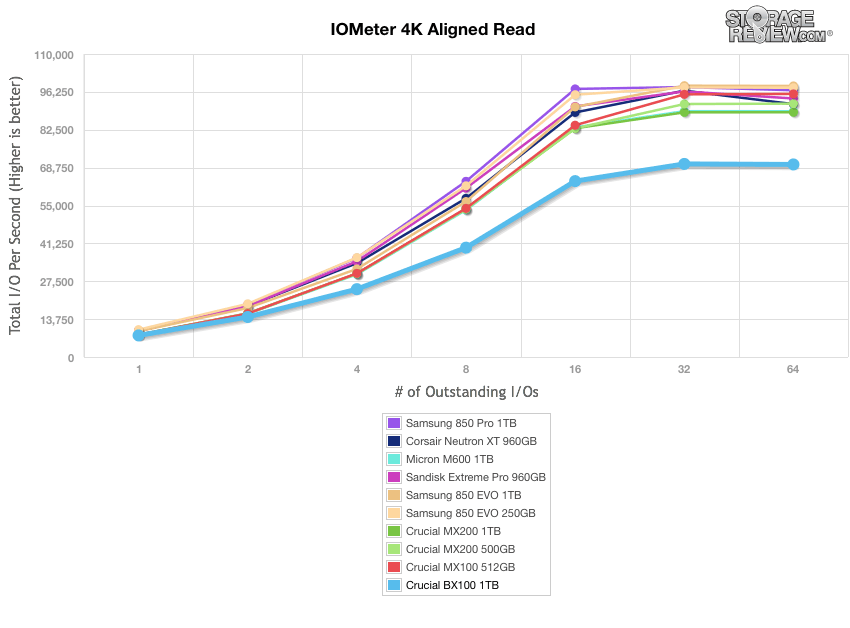 Our first scenario is our database profile, which consists of a 67% read and 33% write workload mix primarily centered on 8K transfer sizes. In this scenario, the BX100 posted a QD1 of 7,637.72 IOPS with 37,223.20 IOPS at QD128, which was roughly in the middle of the other comparables. 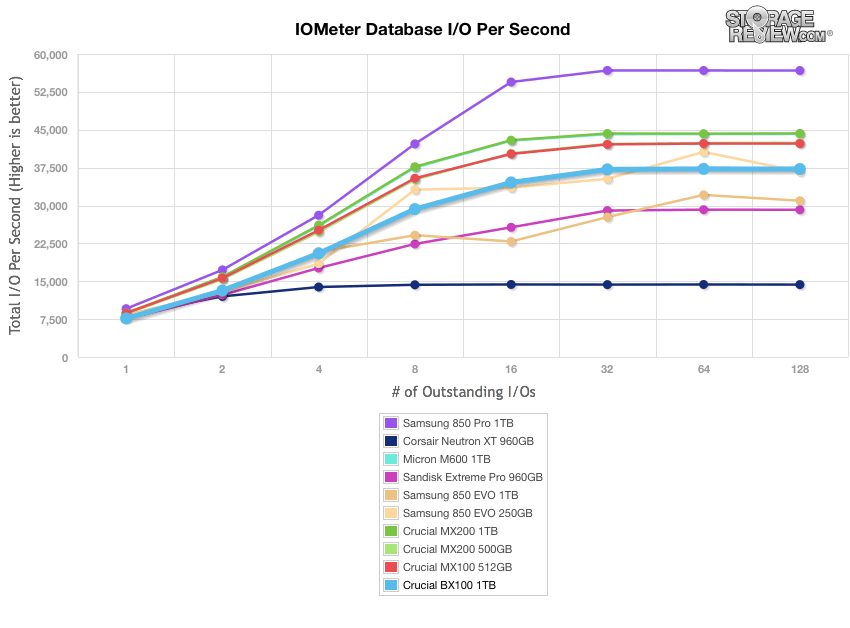 In our file server profile, with 80% read and 20% write workload spread out over multiple transfer sizes ranging from 512-byte to 64KB, the BX100 showed a QD1 throughput of 5,638.23 IOPS while 64QD hit 28,357.1 IOPS. These results were slightly above average compared to the other drives. 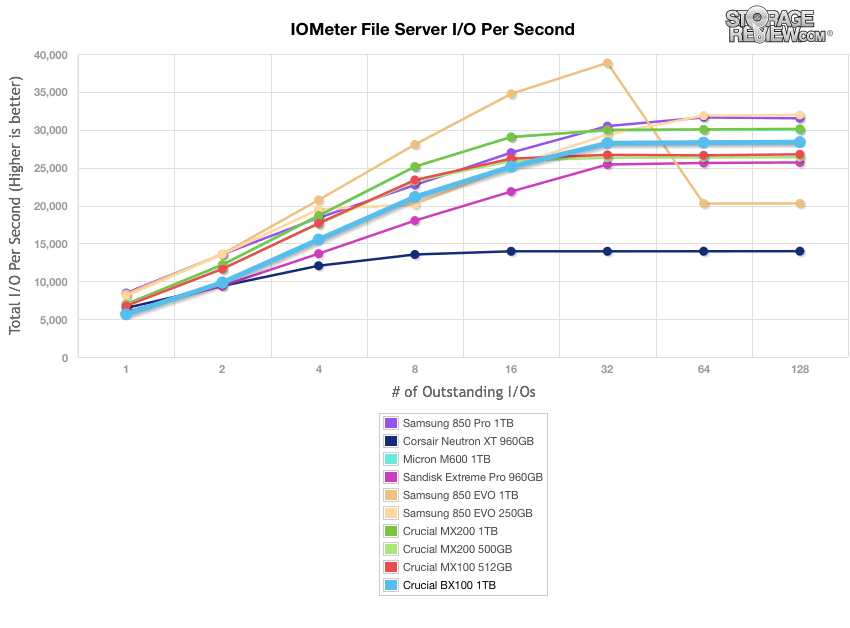 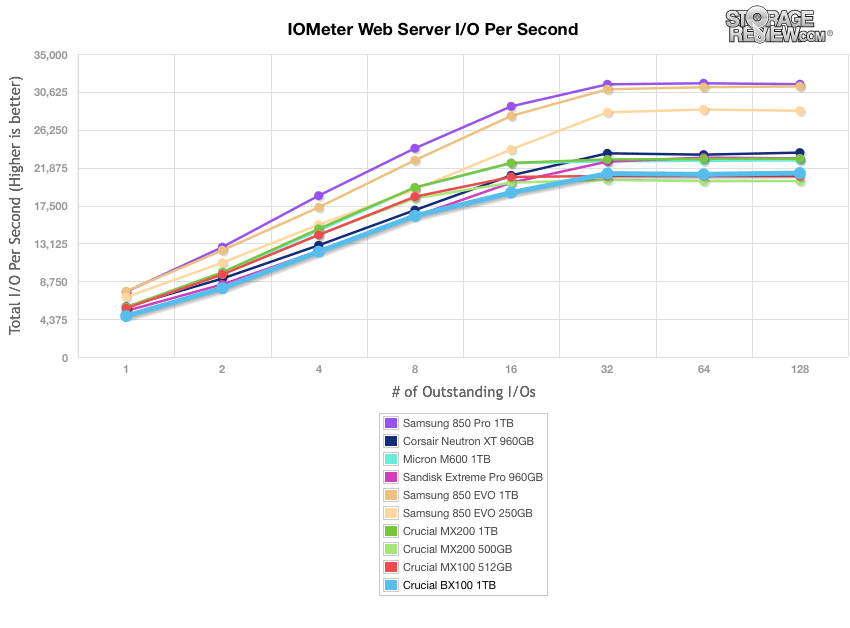 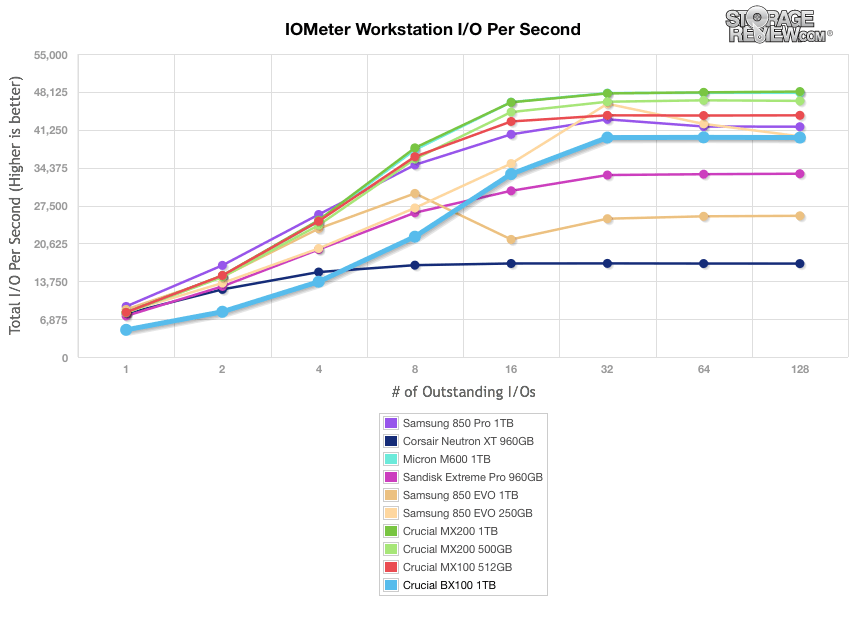 In our HTPC profile, the BX100 recorded middle-of-the-run performance, beating out all other Crucial drives by a significant margin (307MB/s, 6,625 IOPS, and 1.1580ms). The Samsung 850 EVO drives were the top performers here. 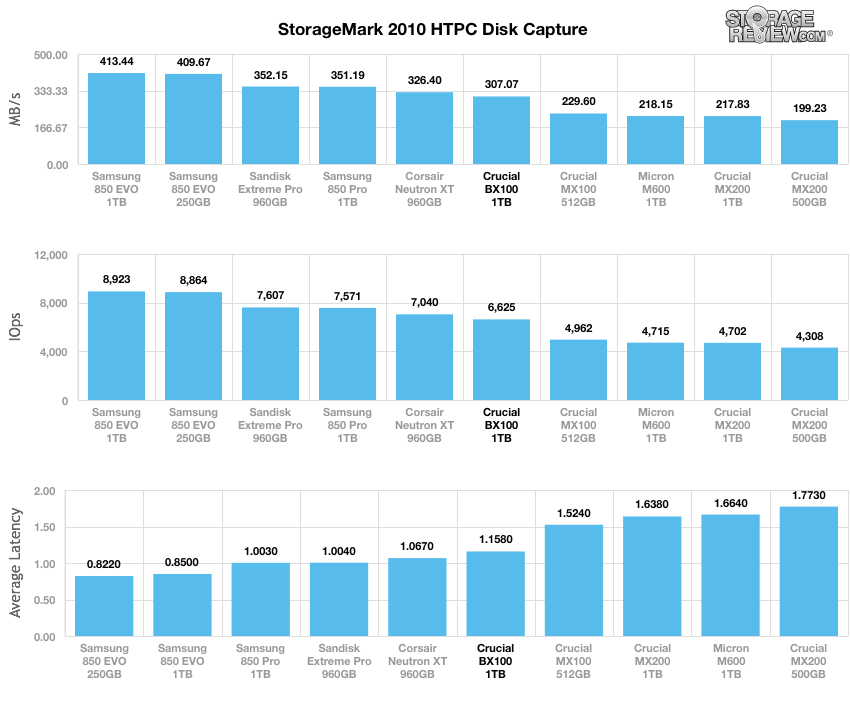 In our Productivity trace, the BX100 posted results that placed it in the middle of the pack, with an average speed of 251.52MB/s and an IOPS of 8,610. The results of the BX100 were once again far and beyond the best-performing Crucial drive. 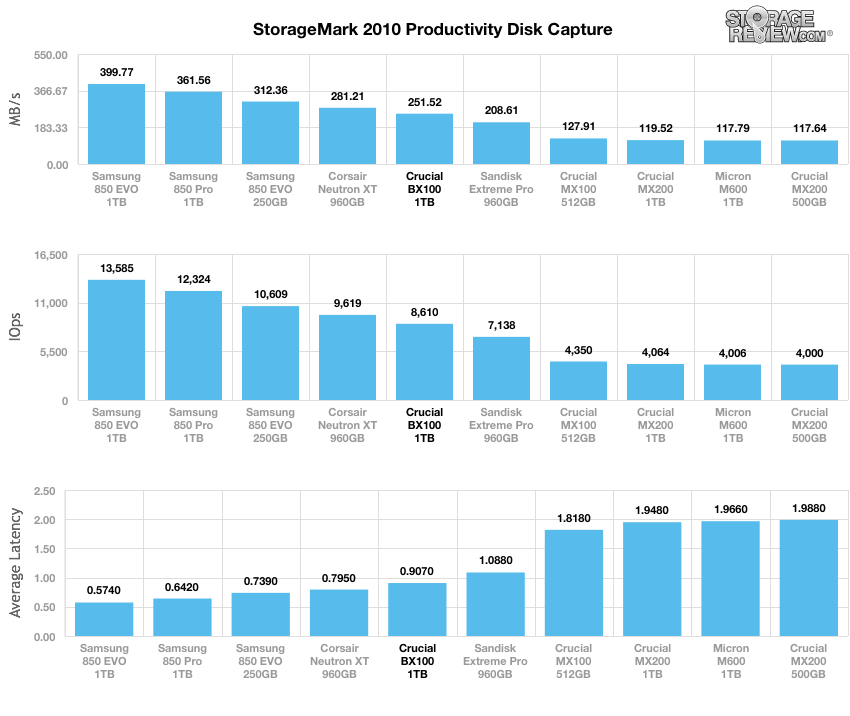 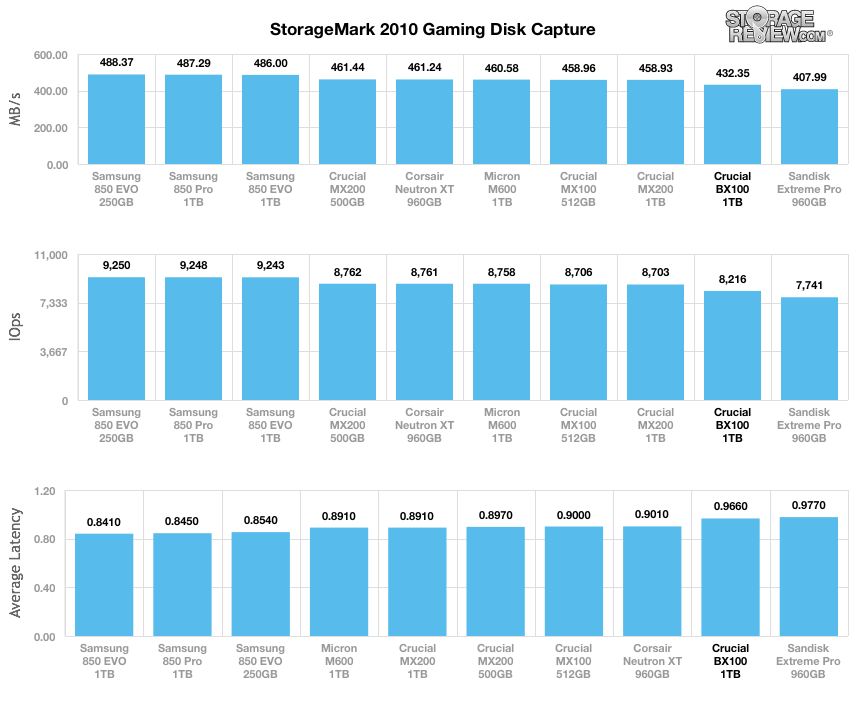 In our power consumption tests, we recorded low idle values from the BX100 with only 0.38 watts, which was almost three times more efficient than the MX200. The BX100 also had a low maximum power consumption reading with its highest at only 2.42 watts (compared to the 1TB MX200’s 4.11 watts), which took place during write activity.

With “B” standing for budget, the BX200 is Crucial’s newest line of economical SSDs that serve users looking for an inexpensive way to upgrade their PCs or laptops from a hard disk to a solid-state-based setup. The new (2.5″ 7mm) SSDs feature a SATA 6Gb/s interface, Micron MLC NAND, and a Silicon Motion SM2246EN controller. For desktop needs, Crucial has also included a 7mm-to-9.5mm adapter bracket. Beyond the low cost, the drive is highlighted by exceedingly low power consumption.

The BX100’s inexpensive price tag comes with a performance cost. This really isn’t surprising, as Crucial even states on their website that the drive is not built for performance, but for ultra affordability. That being said, our sequential 2MB workloads showed that the Crucial BX100 had unpredicted high read activity (though low writes), posting 501.18MB/s. The random workload however, told an opposite story with 399.22MB/s which placed last among the tested consumer drives. The BX100 remained at the bottom of the pack throughout our 4K benchmarks. Things picked up a bit during our server profile tests (with the exception web server activity), where the BX100 placed in the middle-of-the-pack throughout. Moving to our real-world workloads, the BX100 showed middle-of-the-run performance, though it out-performed all other Crucial drives (excluding the gaming profile where it placed at the bottom of the pack) by a significant margin. Overall, there were no real surprises with the BX100’s performance results, except for when it beat its Crucial brethren in sequential and real-world workloads.

When diving into its power consumption, results showed impressive performance numbers. It recorded the best efficiency of all Crucial drives with a maximum reading usage of only 2.42 watts compared to 2.51 watts by the 500GB MX200. Given the midrange performance being good enough for most buyers, the power-sipping nature of the drive may be enough of an influence to sway some buyers.

When taking everything into consideration, the Crucial BX100 will likely be an attractive drive for many, since its target demographic is generally mainstream consumers interested in an inexpensive system upgrade rather than performance. The BX100 goes for roughly $68 for the 120GB model and $180 for the 500GB model (which works out to be approximately $0.36/GB compared to the MX200’s $0.5/GB). Keep in mind that this is also a street price and not a promotional offer. Regardless of its tested results though, users will have a huge boost in performance when upgrading from HDD and that is exactly what the average consumer is looking for.

The Crucial BX100 makes up for its pedestrian performance with excellent power efficiency as well as one of the lowest SSD price tags on the market. All things considered, the BX100 is a highly recommended SSD solution for budget-minded consumers looking to upgrade their dated HDD systems to an SSD-based setup.