The Seagate Seven is the company’s newest addition to their external drive portfolio and is catered towards style-savvy users. This USB 3.0  portable drive is something very different than what we normally expect from Seagate. The Seven leverages an ultra-thin 7mm form factor and slick, premium design. Though not obvious when you first look at the Seagate Seven, this extremely thin device is very tough and durable for its size.

The Seagate Seven is the company’s newest addition to their external drive portfolio and is catered towards style-savvy users. This USB 3.0  portable drive is something very different than what we normally expect from Seagate. The Seven leverages an ultra-thin 7mm form factor and slick, premium design. Though not obvious when you first look at the Seagate Seven, this extremely thin device is very tough and durable for its size. 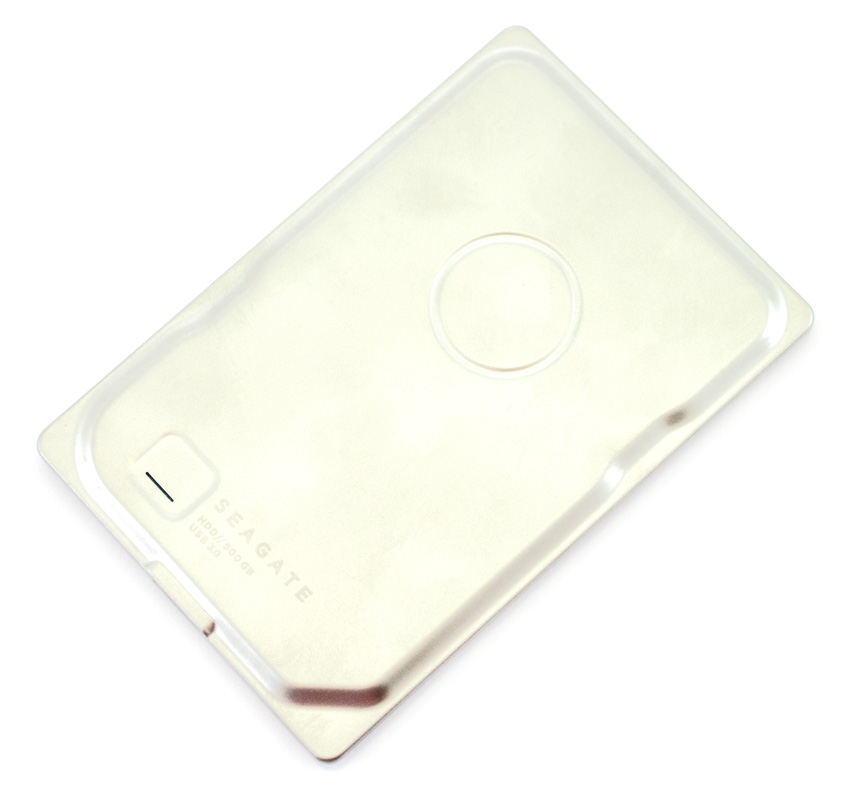 Like other Seagate external drives, the Seven comes pre-loaded with the Seagate Dashboard software, which allows users to protect and back up their content on both a computer and mobile devices. A mobile app for both iOS and Android is also available, allowing users to use their WiFi and Cloud services for backups.

The Seagate Seven is available only in a 500GB capacity, which is priced at roughly $100. A 3-year warranty is included.

The Seagate Seven is a very slick looking drive. It looks as though like the LaCie team, who are known for their premium builds and are now a part of Seagate, had a heavy hand in its design. The enclosure itself is comprised of extremely thin, 100% stainless steel, which protects the single-platter 5mm hard drive inside. Due to this steel-based build, it is relatively heavy for its size but is also very rigid. 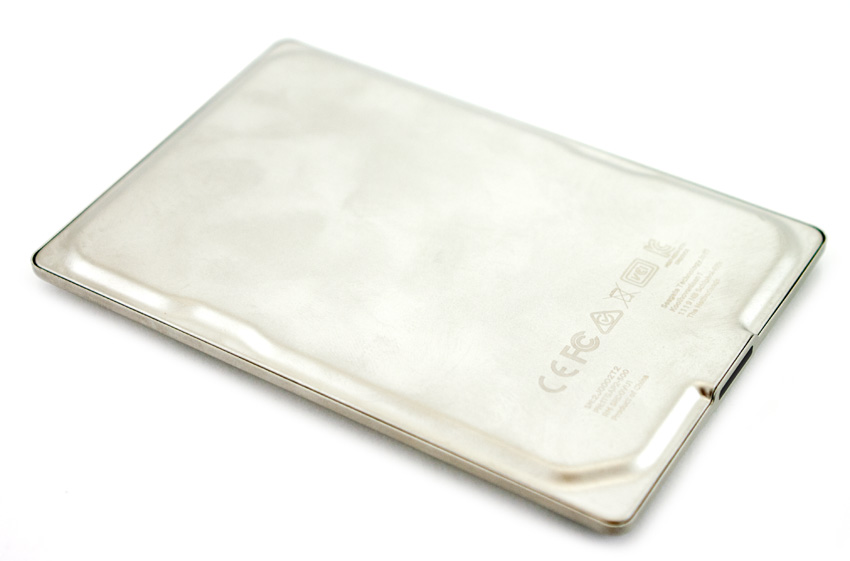 As for branding and supplemental information on the front of the drive, the Seven is fairly minimalistic in this regard. The Seagate logo and basic information is unobtrusively located at the bottom-middle in white font.

Also located on the top is a blue access LED light. In addition, the included USB cable is wrapped in fabric (opposed to the typical plastic), which makes for easier cord management and more elegant overall look. Both of these features are a very nice added touch to this complete, premium package. The only down side is the enclosure does pick up fingerprints pretty easily, so keeping it smudge free will be a challenge for those bothered by such things.

The Seagate Dashboard is a very easy to use backup/protection software package that is bundled with all Seagate external drives. It also integrates very well with the iOS and Android Seagate Mobile Backup app, allowing users to back up their files directly from their smart phone using Wi-Fi or via cloud services including DropBox or Google Drive. The interface is very clean, simple, and well thought out, all the while recognizing our drive immediately.

The Home section of the Seagate Dashboard gives users the option to back up data to your PC, back up mobile files to the Seagate Seven or the Cloud, and restore a backup that was already made. 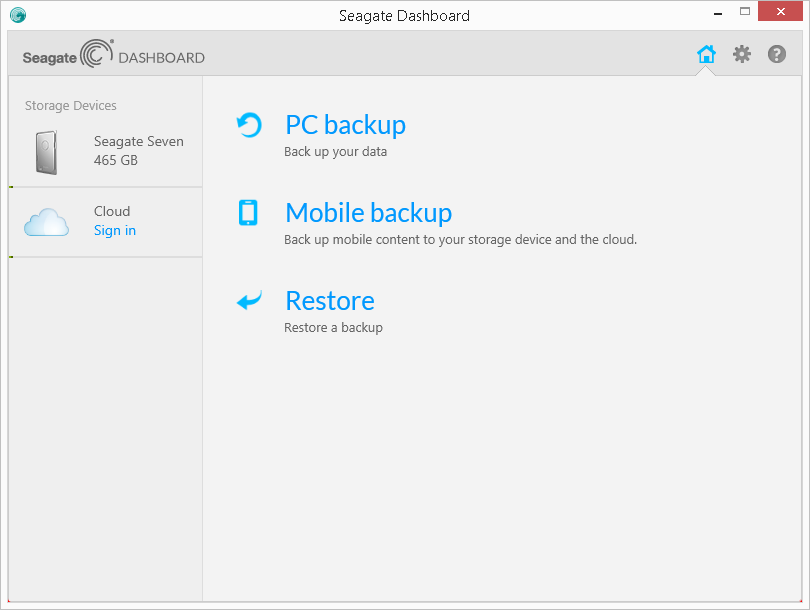 When you select your Seagate Seven device from the left pane, three tabs will be displayed: Info, Manage, and support. The Info section displays the type of Seagate drive along with its serial number and firmware version as well as a link to register your device. It also shows how much capacity is used and the ability to view the files. 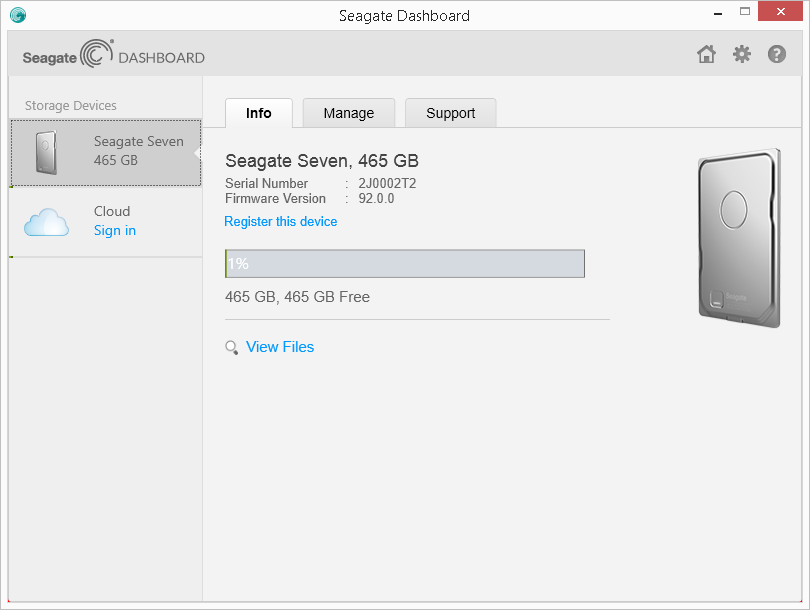 The Manage section allows users to turn on and off the status LED light, which is located on the top of the Seagate Seven. It also includes an option to test your drive to ensure that it is working properly as well as the ability to choose when your drive enters power saving mode. 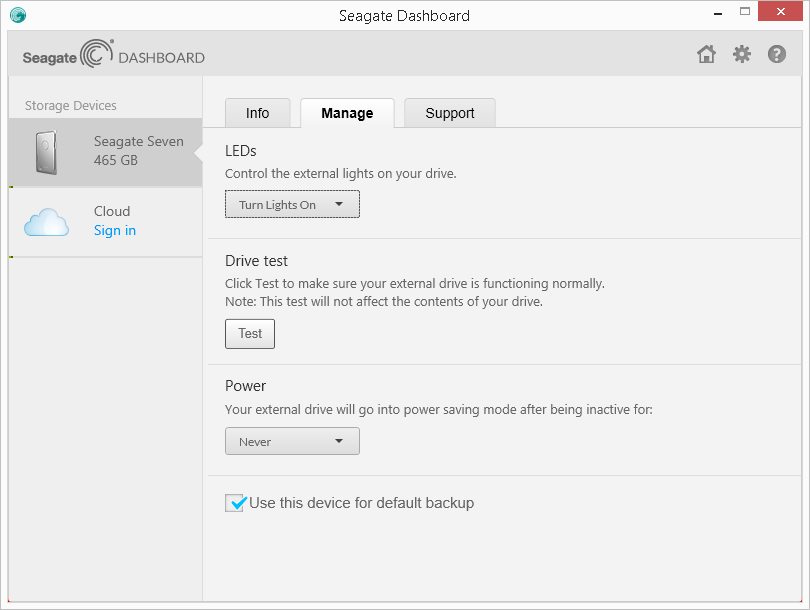 The Seagate Seven is a super thin USB 3.0 portable hard drive and is the company’s first foray into the ultra-premium design market under the Seagate banner. The Seven also supports both Mac and Windows platforms, giving users the ability to manage the drive on both operating systems, interchangeably, without having to reformat. In addition, the drive comes pre-loaded with the Seagate Dashboard, allowing users to easily set up automatic backups as well as mobile backups using iOS and Android or Cloud Services such as DropBox or Google Drive.

Though it posted reasonable performance during our tests (114.90MB/s read and 113.78MB/s write sequential transfer rate), the main draw of the Seagate Seven is clearly design. Everything about this drive shouts quality, even the packaged fabric USB cord, which many will appreciate. Additionally, its stainless steel enclosure and circular status LED add to its extremely polished look and, though a bit on the heavy side, it feels very secure when handled. The Seven’s premium build, however, comes at a price by compromising the capacity per dollar. The Seagate Seven goes for $100, whereas most branded 2TB portable drives are available for under that price tag, so customers really have to ask themselves whether they want storage solution with a cool looking design and just enough storage capacity, or something more practical. Certainly if the Seven's diminutive footprint and capacity get the job done, there are few alternatives that engender quite the same elegance.

The Seagate Seven will likely find success with design-savvy consumers who prefer small footprint and style over capacity. We found its unique, thin design to be an impressive offering by Seagate in a market awash with unimaginative plastic enclosures.