The Crucial BX300 is the company’s latest consumer SSD that combines their 3D NAND with a budget-friendly price tag. The new BX300 SSD is the direct successor to the BX200 and features a Silicon Motion Controller and custom firmware. Highly energy efficient, the BX300 is available in 120GB, 240GB, and 480GB capacities.

The Crucial BX300 is the company’s latest consumer SSD that combines their 3D NAND with a budget-friendly price tag. The new BX300 SSD is the direct successor to the BX200 and features a Silicon Motion Controller and custom firmware. Highly energy efficient, the BX300 is available in 120GB, 240GB, and 480GB capacities. 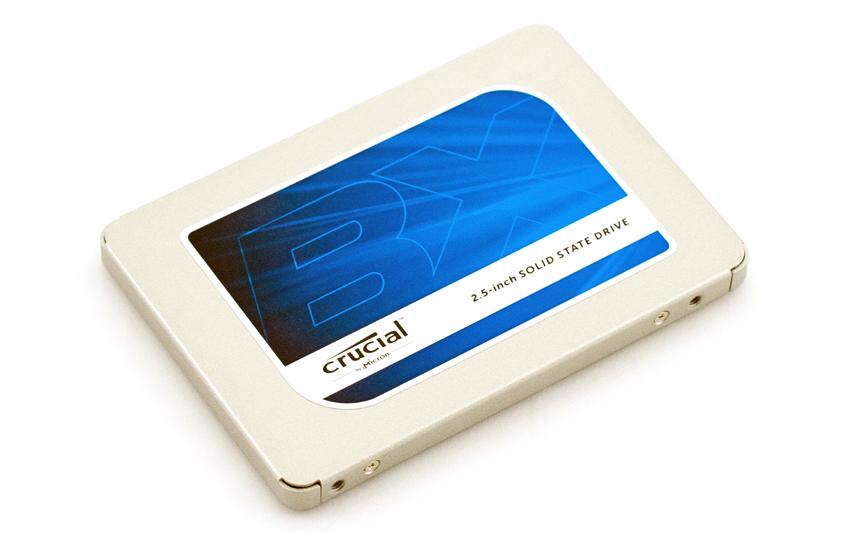 Crucial has released some of the most accessible drives over the past several years, and their latest release is no exception; the BX line has been a driving force affordable SSDs. And even though the BX300 is marketed as one of these lower-end drives, it still offers leaps and bounds in performance gains over platter-based drives; upwards of 10 times more. To this end, the highly energy-efficient BX300 is quoted to deliver noticeable improvement over the previous 2015 BX200 model, claiming sequential speeds of 555MB/s read and 510MB/s write (compared to 535MB/s read and 450MB/s write) and 95,000 IOPS read and 90,000 IOPS write in random throughput performance (compared to 66,000 IOPS and 78,000 IOPS).

To make the upgrade process easier for users, Crucial’s Advisor tool determines if compatibility is possible with Crucial drives based on their current rig’s manufacturer, make and model. In addition, Crucial has bundled an Acronis True Image HD software key for seamless data migration from your old drive to the BX300.

Like the BX100 and BX200 before it, Crucial has once again decided to leave the design of the BX series untouched with its newest drive. To this end, it features the slick looking blue and white label sticker on the front side of the SSD, which displays the Crucial logo, product brand, and the form-factor information. The enclosure has robust metal build with smoothed out edges. There’s no indication that this is the BX300 model, which might cause minor confusion for those who own different generation from the BX line. 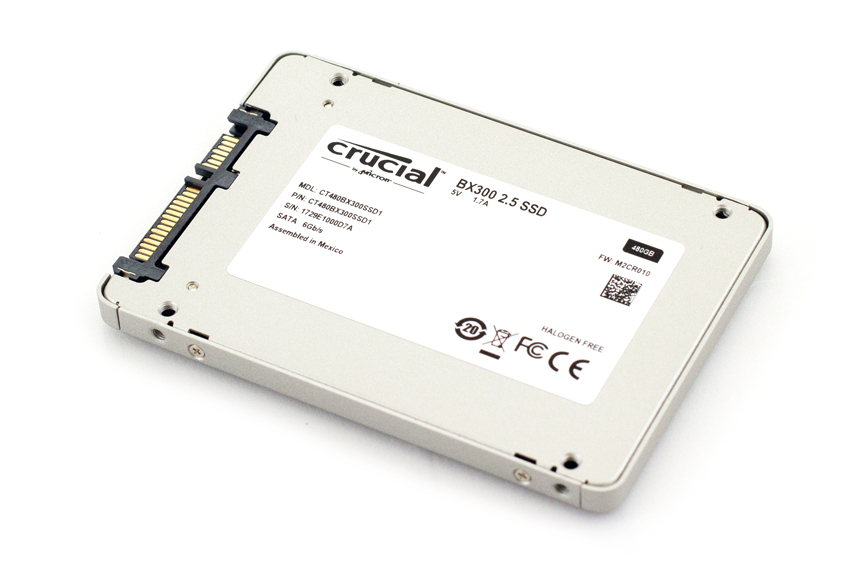 The backside of the SDD features the usual white sticker that displays information about the specific drive model, such as the model number, capacity and form factor. 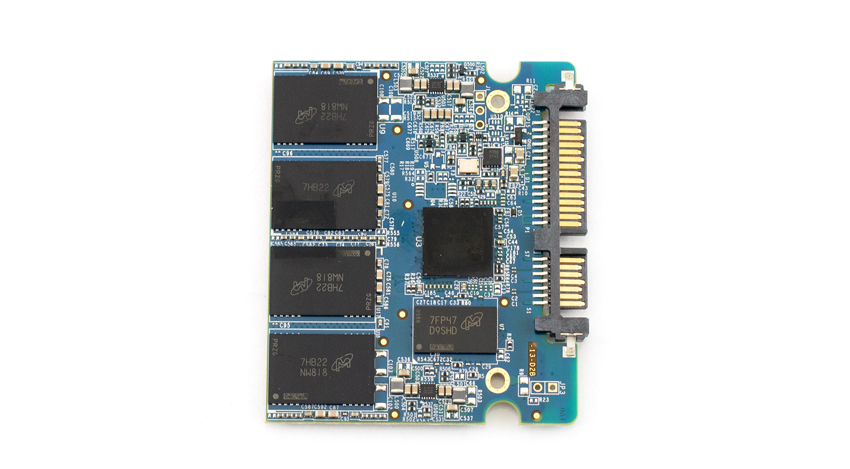 The side profiles each have two mounting screw holes and,  with its slim 7mm (2.5″) form factor, the BX300 can fit inside pretty much any notebooks. For desktop PC users, the new Crucial drives come bundled with a 7mm-to-9.5mm adapter bracket. 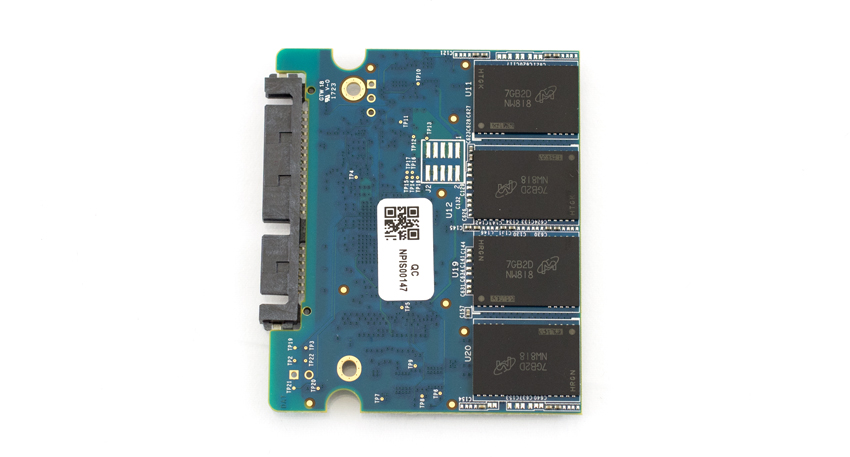 All consumer SSD benchmarks are conducted using the StorageReview HP Z640 Workstation. We compared the Crucial BX300 SSD to the following drives:

Switching to smaller 4K random transfers, the BX300 480GB measured 30.24MB/s in read activity and 107.21MB/s for writes, placing it in the bottom and middle of the pack, respectively. 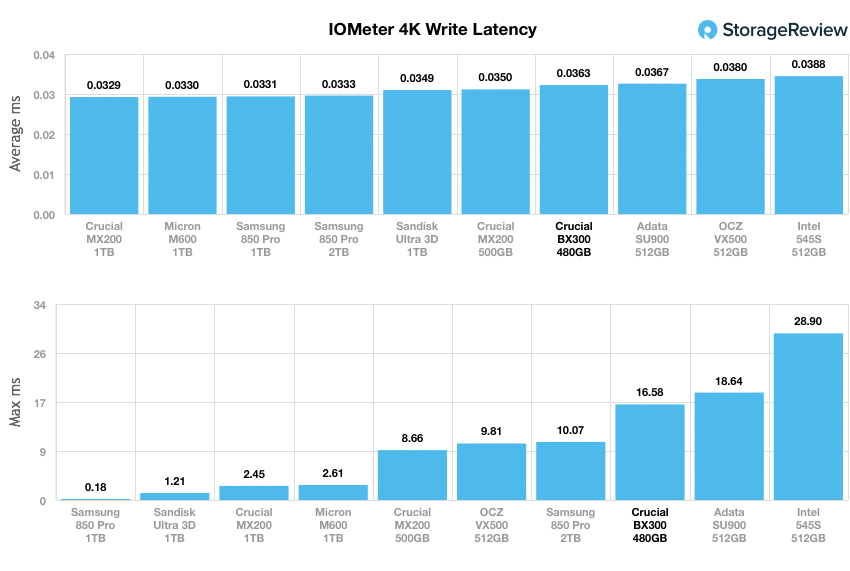 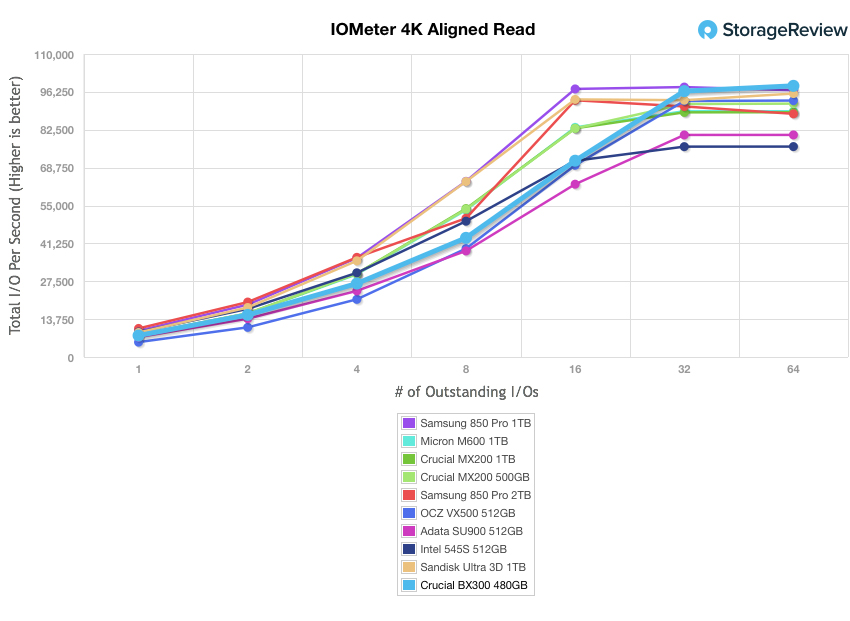 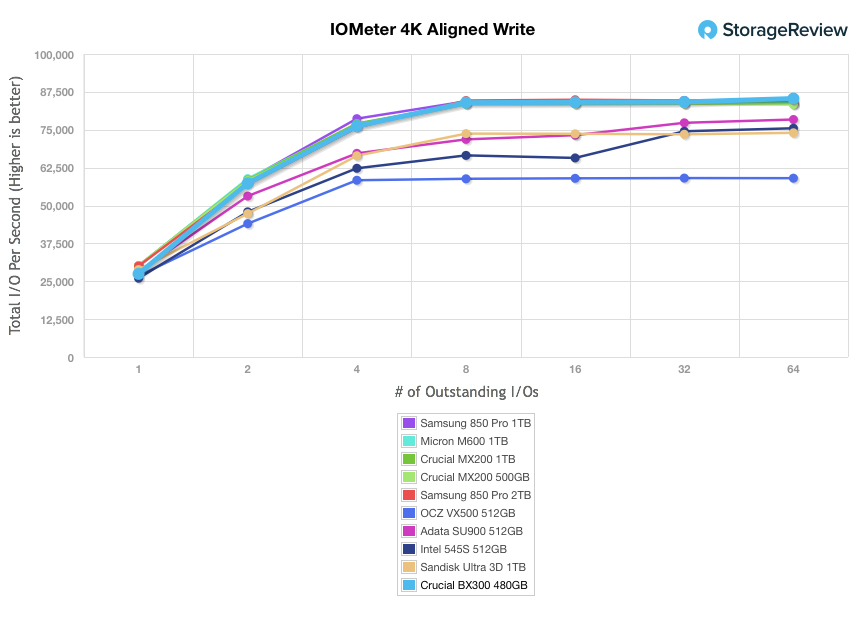 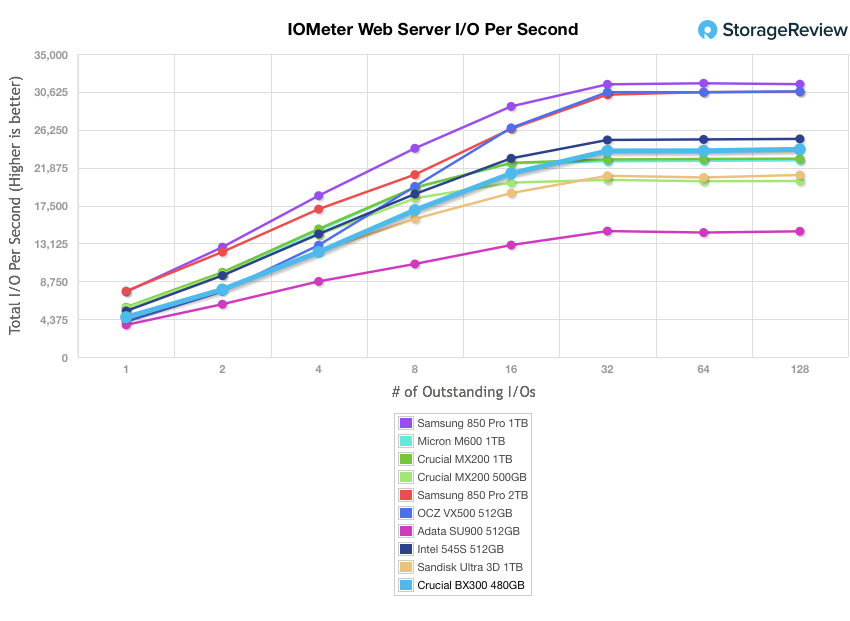 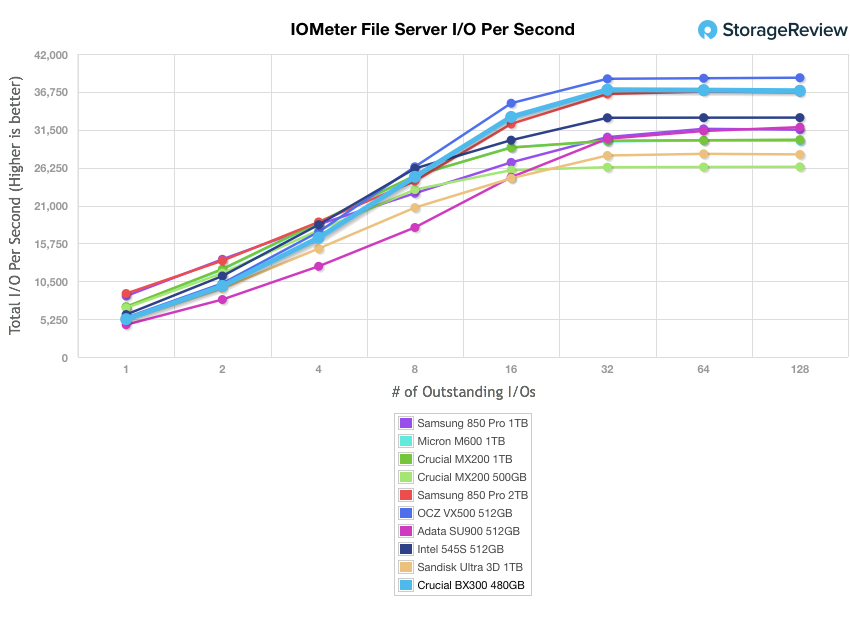 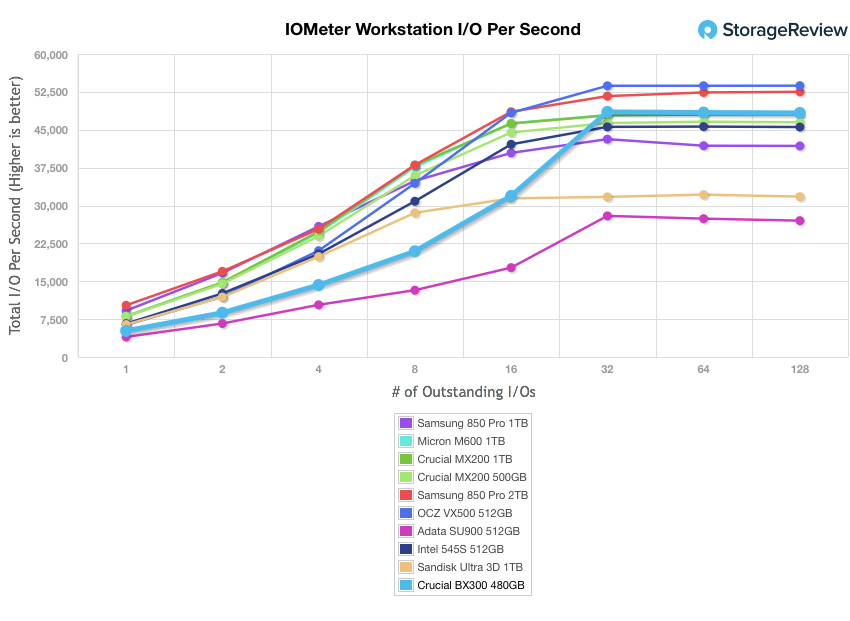 While the results of synthetic benchmarks are important in identifying the key strengths and weaknesses of a drive, performance in these tests does not always translate directly into real-world situations. To get a better idea how the Crucial BX300 drive will handle itself in the field, we will chart StorageMark 2010 HTPC, Productivity, and Gaming traces against comparable drives. Higher IOPS and MB/s rates with lower latency times are preferred. 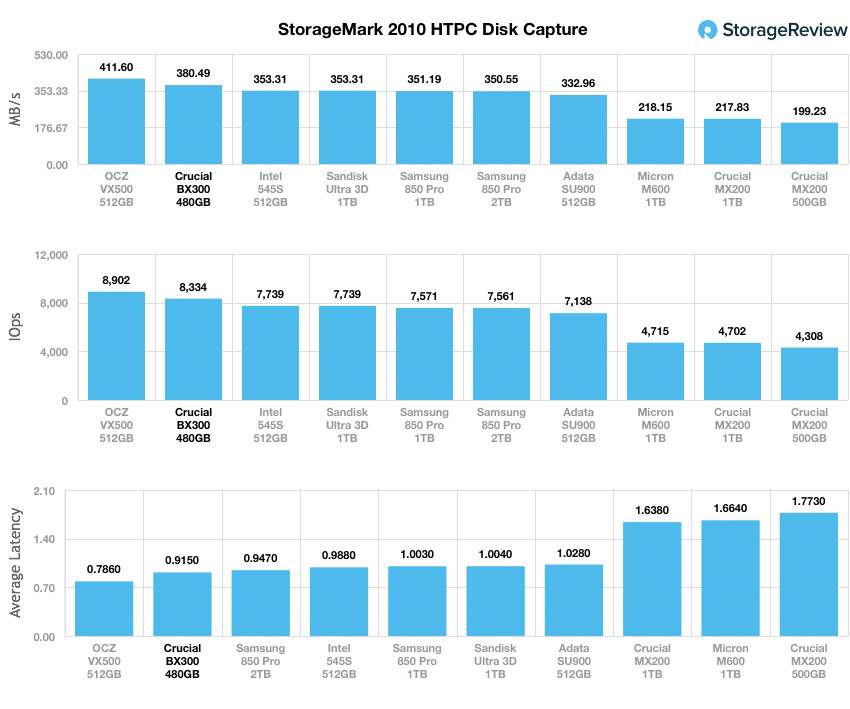 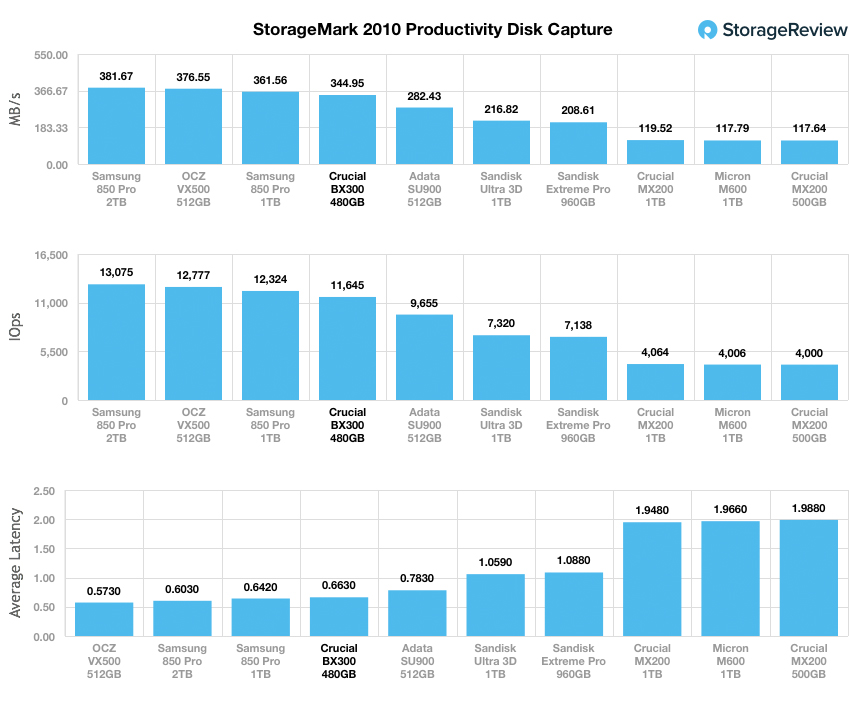 In our gaming benchmark, the BX300 fell pretty hard, nearly placing last. Here the BX300 scored 8020.11 IOPS, 431.65MB/s and 0.934ms in average latency, results which were identical to the Sandisk Ultra 3D 1TB with the exception of the latter. 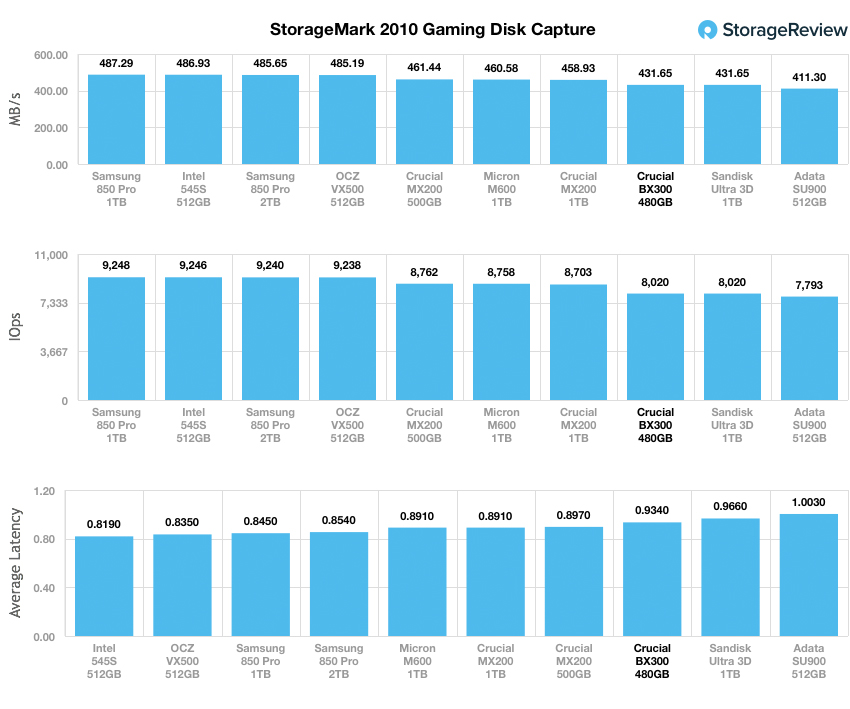 Like its predecessors, the BX300 is an impressive release for a budget drive, giving consumers a viable and inexpensive option to upgrade their computers from a platter-based hard disk system to one that runs significantly faster via solid-state drive technology. The new Crucial drive features Micron 3D NAND, a Silicon Motion Controller and a 7mm-to-9.5mm adapter bracket. With its 2.5″ (7mm) form factor and SATA 6Gb/s interface, the BX300 can fit inside compact desktop PCs to ultra-slim notebooks. Not only is this one of the least expensive drives one of the SSD market, the BX300 comes with the company’s lowest power consumption to date.

Reiterating what we have said in previous reviews of past BX SSDs, we do acknowledge the sometimes inconsistent performance, which was made obvious in our benchmarks; however, Crucial didn’t design the BX300 to compete with drives like the Samsung 850 Pro (though it did manage to beat it in some of our tests); it was designed to provide an ultra-affordable option with decent performance.

Diving into the details of the 480GB model’s performance, sequential 2MB workloads showed 506.66MB/s read and 460.86MB/s write, placing it right at the top of the leaderboard with much more expensive drives. The random workload, however, showed performance of 432.21MB/s read and 461.73MB/s write, results which found it near the bottom of the pack (only the ADATA SU900 512GB had slower numbers). Results were mirrored in our smaller 4k random transfers and latency benchmarks.

Performance picked up slightly during our server profile tests, where the BX300 placed among the leaders throughout most of the workloads. Moving to our real-world workloads, the new Crucial drive model showed impressive performance during our Productivity and HTPC traces, though it placed ranked near the bottom in our Gaming profile.

The Crucial BX300 is a great addition to the budget-friendly SSD line, as it offers an inexpensive option for consumers looking to upgrade their HDD rig to solid state technology.