Crucial released the MX100 last summer, which we found to be a compelling choice as a system upgrade for new users as well as for those who put an importance on data reliability. Moving forward with their latest consumer SSD release, Crucial believes their MX200 improves on its predecessor in every way due to its new Dynamic Write Acceleration technology and other new features (such as the drive’s use of an adaptable pool of flash memory). As with all of its drives, Crucial has built the MX200 with a focus on reliability and longevity, making this new drive a very attractive SSD option for many mainstream consumers. The MX200 line also comes in various form factors (2.5” 7mm, mSATA, M.2 Type 2260, and M.2 Type 2280), catering to a wide range of different applications and OEM use cases.

Crucial released the MX100 last summer, which we found to be a compelling choice as a system upgrade for new users as well as for those who put an importance on data reliability. Moving forward with their latest consumer SSD release, Crucial believes their MX200 improves on its predecessor in every way due to its new Dynamic Write Acceleration technology and other new features (such as the drive’s use of an adaptable pool of flash memory). As with all of its drives, Crucial has built the MX200 with a focus on reliability and longevity, making this new drive a very attractive SSD option for many mainstream consumers. The MX200 line also comes in various form factors (2.5” 7mm, mSATA, M.2 Type 2260, and M.2 Type 2280), catering to a wide range of different applications and OEM use cases. 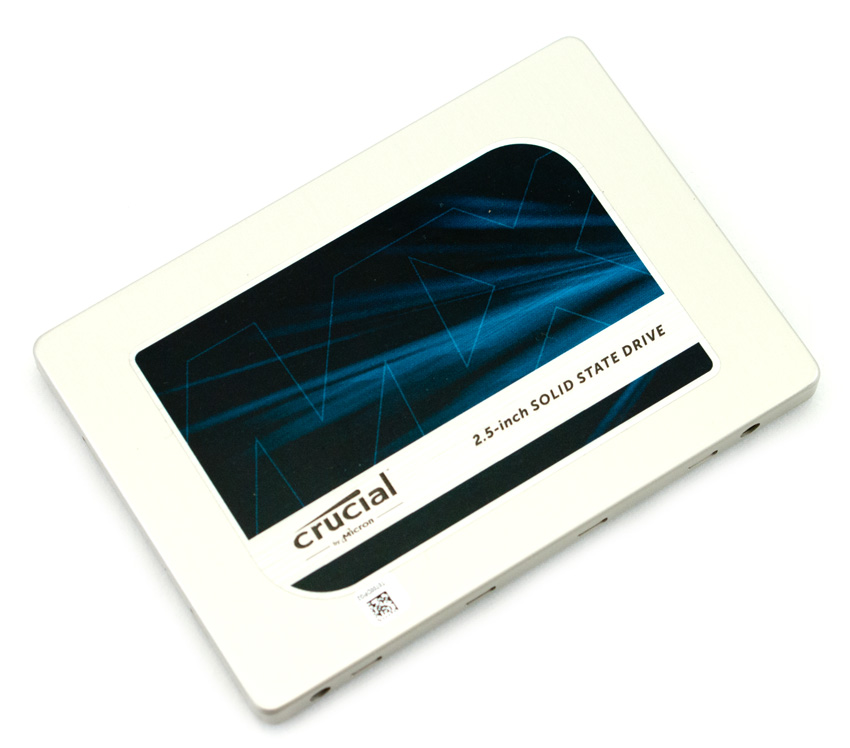 Crucial MX200 SSDs are quoted to deliver upwards of 550MB/s in sequential reads on both compressible and incompressible data, which is equivalent to the reported speed of the MX100. The Crucial MX200 also features the company’s RAIN technology, which protects user data at the component level. This means that the data that is being saved on the MX200 is dispersed on multiple storage components on the drive. As a result, if one of these components fails, user data would still be protected and reserved elsewhere on the drive. This is something not often seen on consumer-grade SSDs, as it’s typically considered an enterprise feature. The new Crucial drive also features AES 256-bit encryption (for increased security), Adaptive Thermal Protection technology (which enables the MX200 to dynamically adjust storage component activity based on how the drive is being used), and Power Loss Protection (to preserve user data if power is lost).

The Crucial MX200 is available in capacities of 250GB, 500GB, and 1TB in various form factors. All drives ship with a 3-year warranty. This review is of the 500GB and 1TB capacities.

The Crucial MX200 is virtually identical to the MX100 when looking at its exterior design. As such, a label sticker is featured on the front of the SSD, which features the Crucial logo and form-factor branding. The casing itself is comprised of a smooth, yet rugged build and is also fingerprint-free. The back panel of the MX200 displays information about the model. 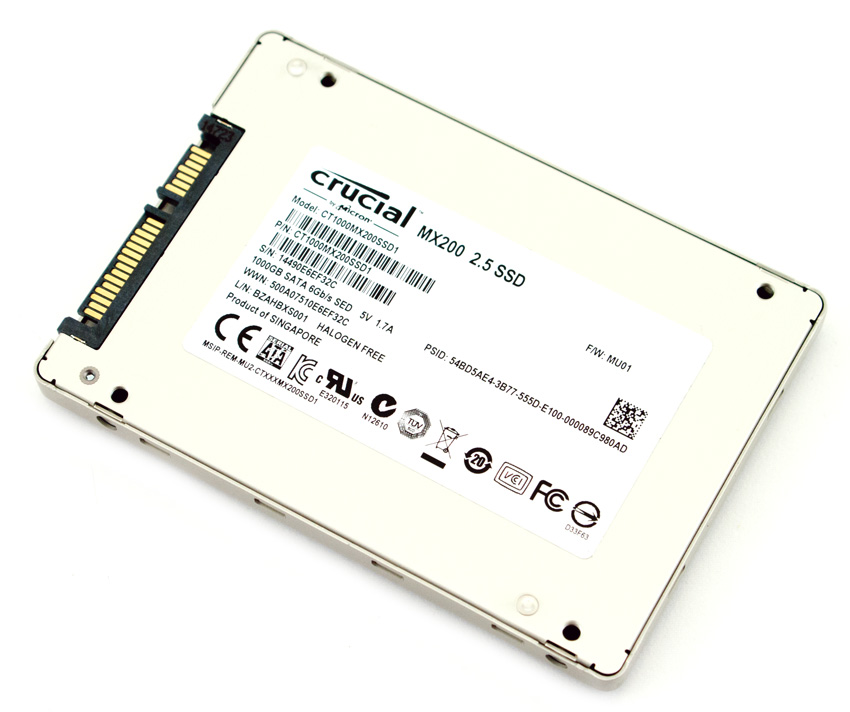 There are two screw holes on each of the side profiles, allowing the drive to be mounted properly. Our MX200 review models use the slim 7mm (2.5″) profile and with its included 7mm-to-9.5mm adapter bracket, the drive easily fits inside the 7mm Ultrabook space as well as most other host devices. The Crucial drive is also rounded out with standard SATA power and data connectors on the front. 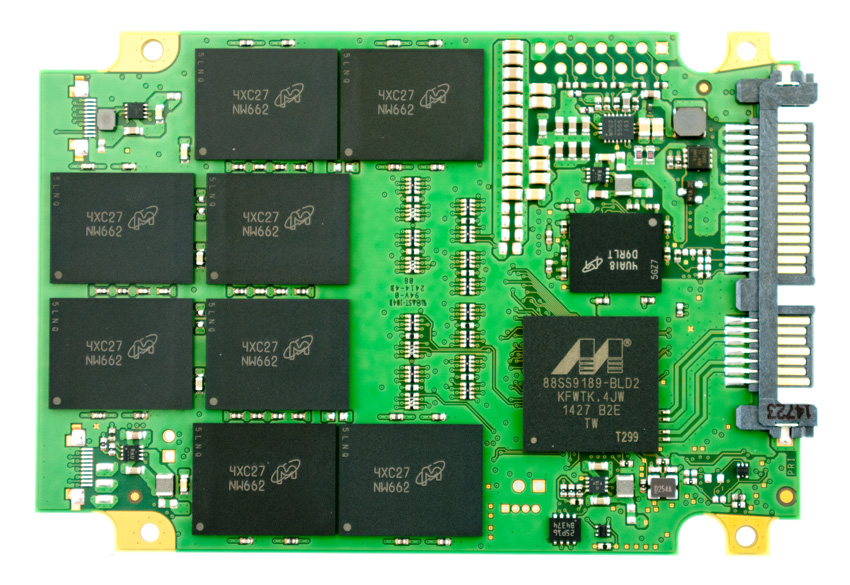 To open up the Crucial MX200, we have to release the internal clips that hold the case together. The Crucial MX200 500GB model uses a Marvell 88SS9189 controller (which is the same controller used in the MX100) with 16nm 128Gb NAND part die. The boards are pretty much the same, including Power Loss Protection which is included on both drives. 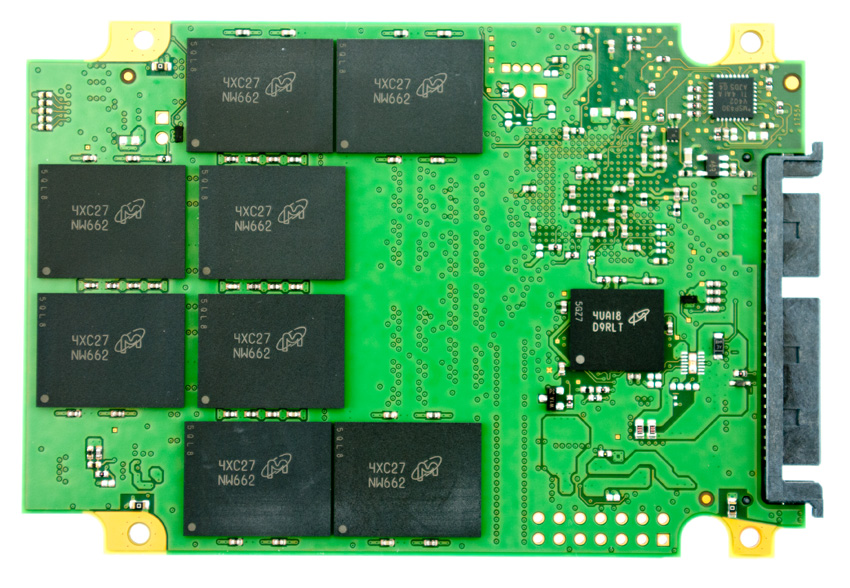 All consumer SSD benchmarks are conducted with the StorageReview HP Z620 Workstation. We compared the Crucial MX200 to following drives: 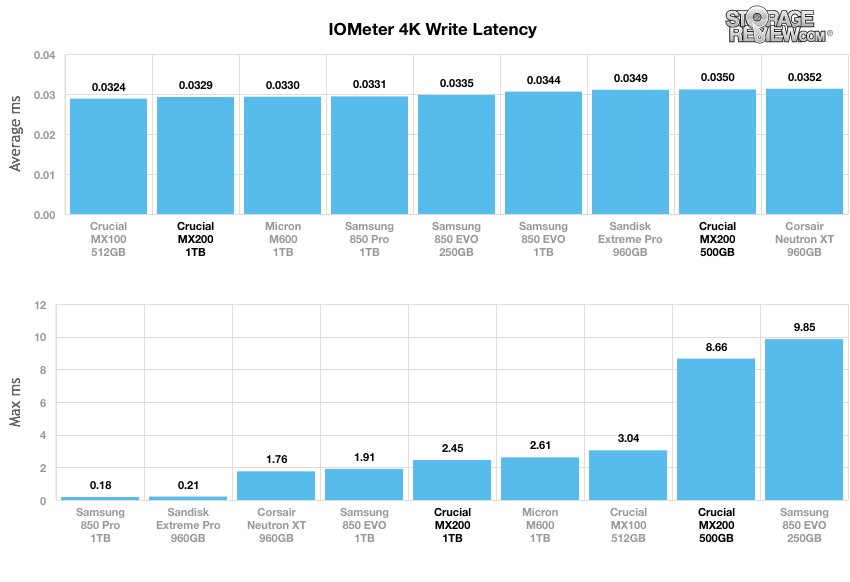 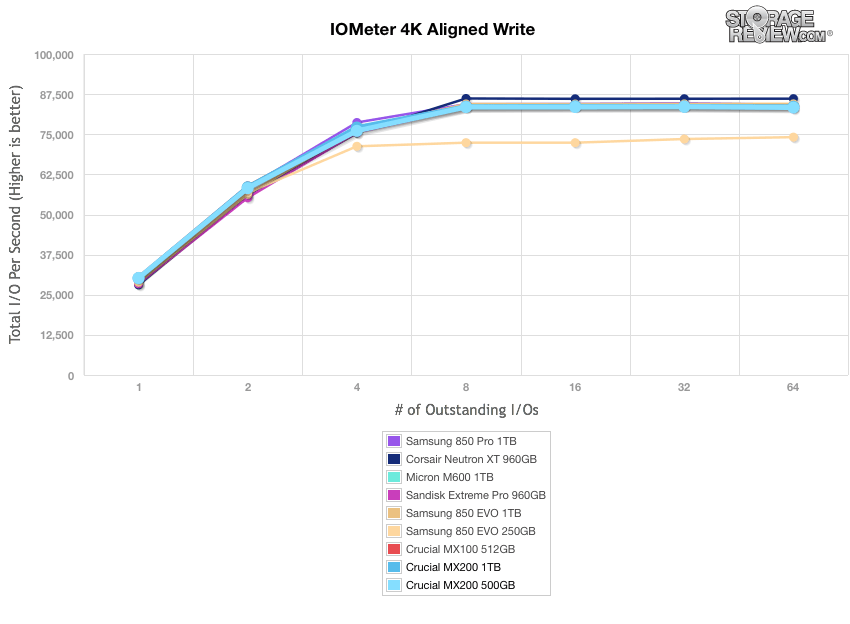 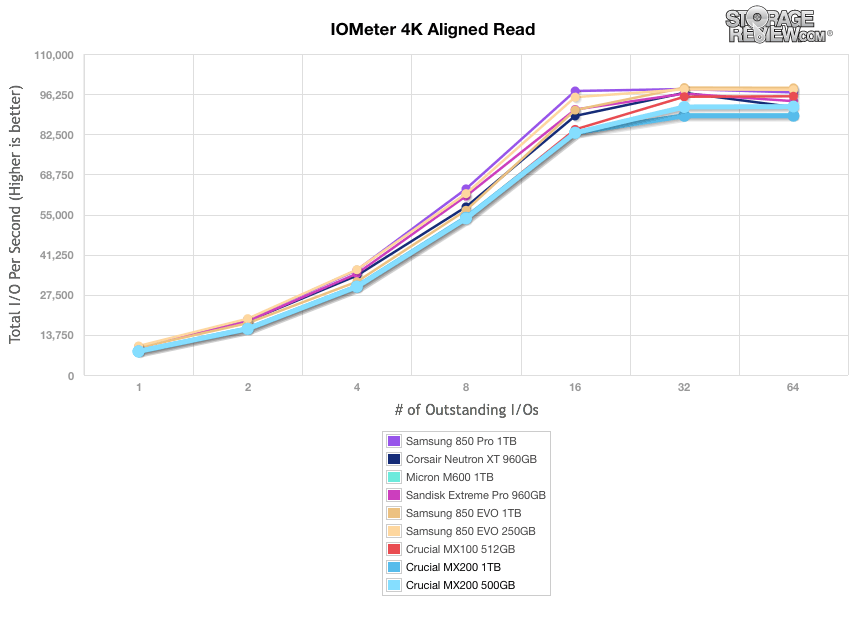 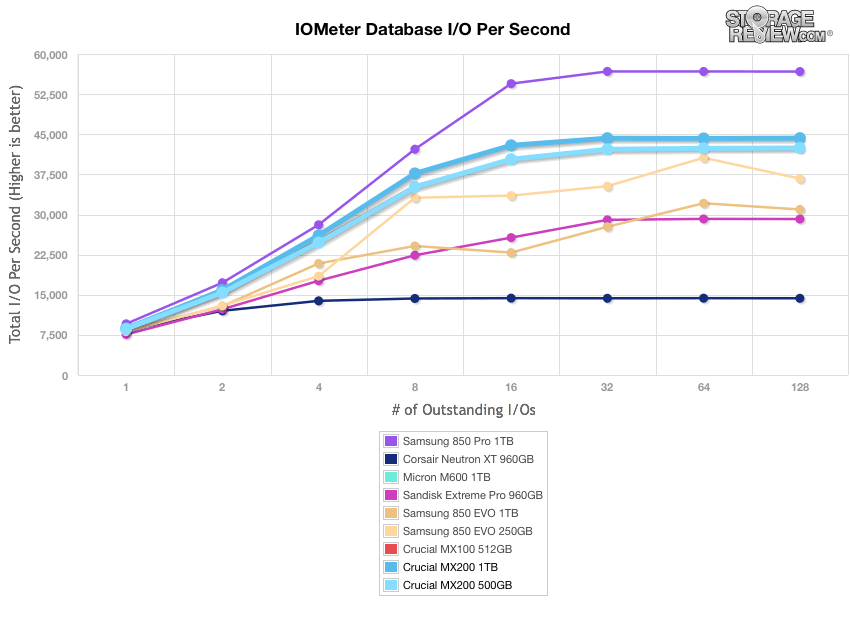 In our file server profile, with 80% read and 20% write workload spread out over multiple transfer sizes ranging from 512-byte to 64KB, the 1TB model MX200 showed the best results of the two Crucial MX200 drive capacities, ranking third overall. 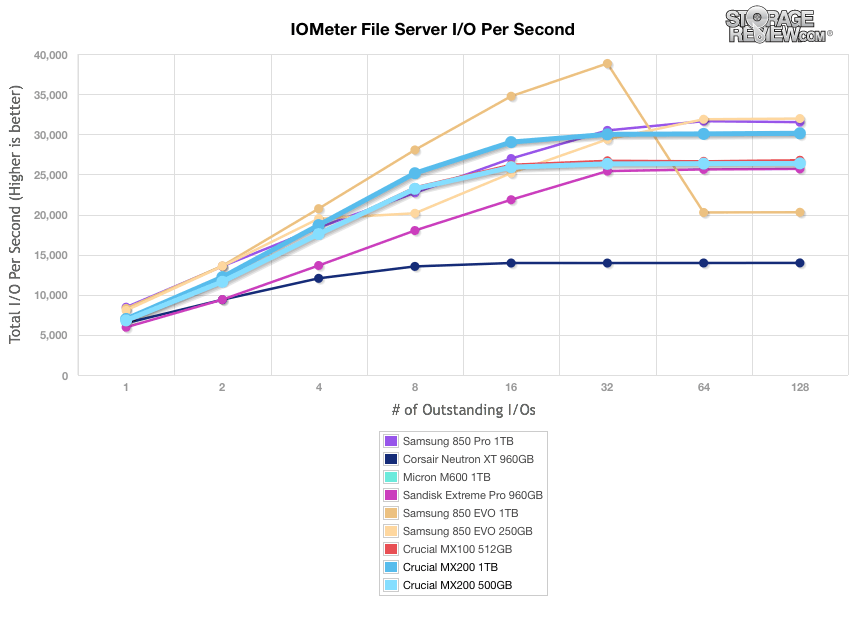 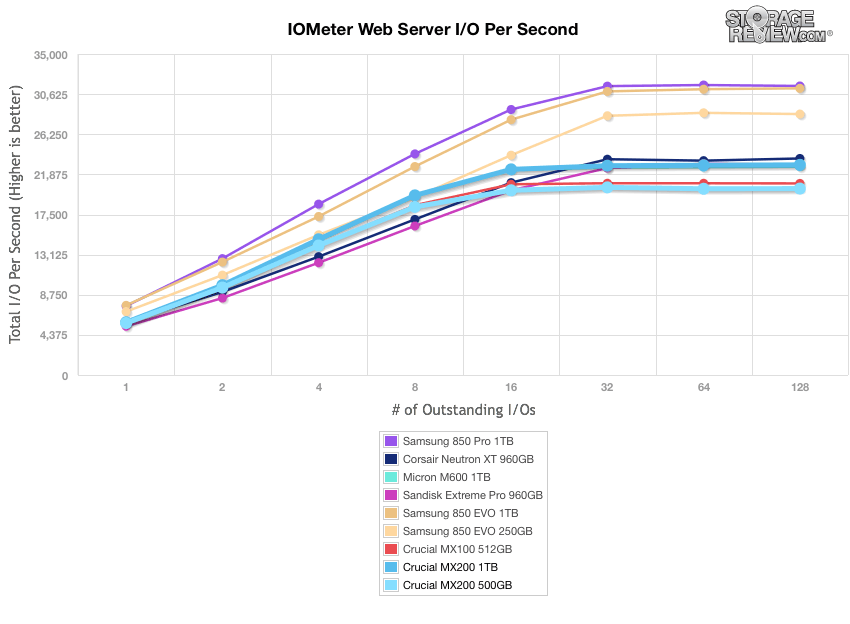 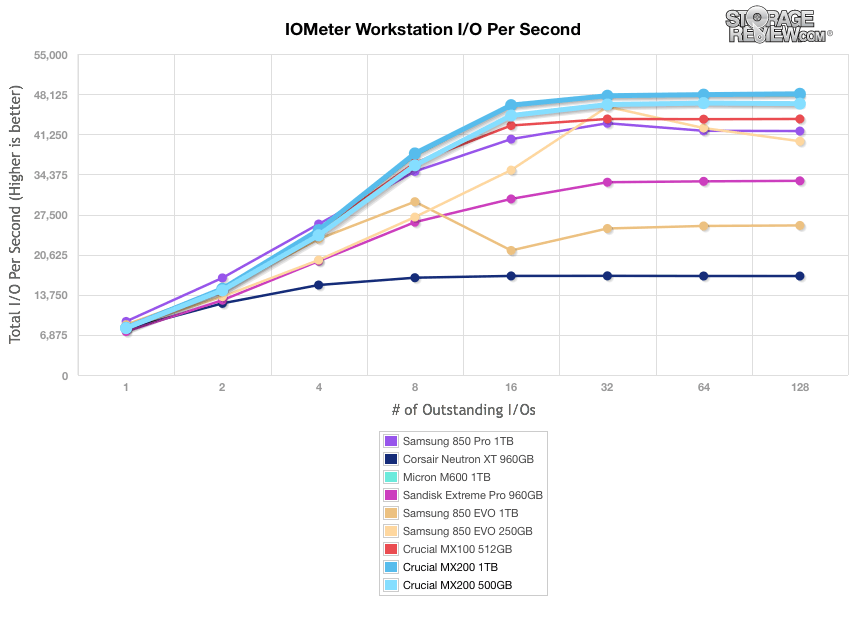 The first real-life test is our HTPC scenario. In this test we include: playing one 720p HD movie in Media Player Classic, one 480p SD movie playing in VLC, three movies downloading simultaneously through iTunes, and one 1080i HDTV stream being recorded through Windows Media Center over a 15 minute period. Higher IOPS and MB/s rates with lower latency times are preferred. In this trace we recorded 2,986MB being written to the drive and 1,924MB being read.

In our HTPC profile, the MX200 recorded very poor performance, with results placing it at the very bottom of the pack. The MX100 had noticeably better results than its successor. 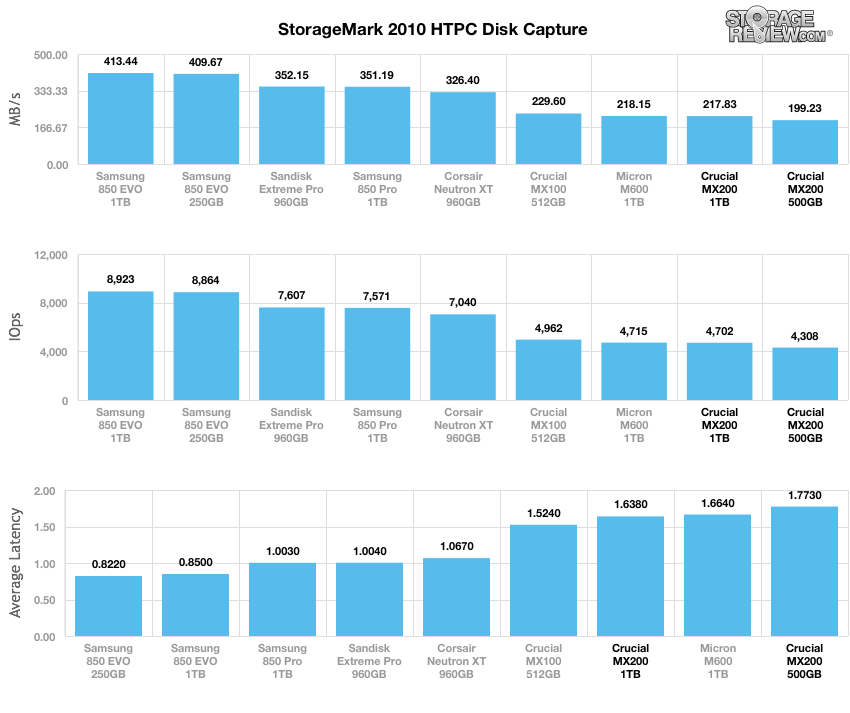 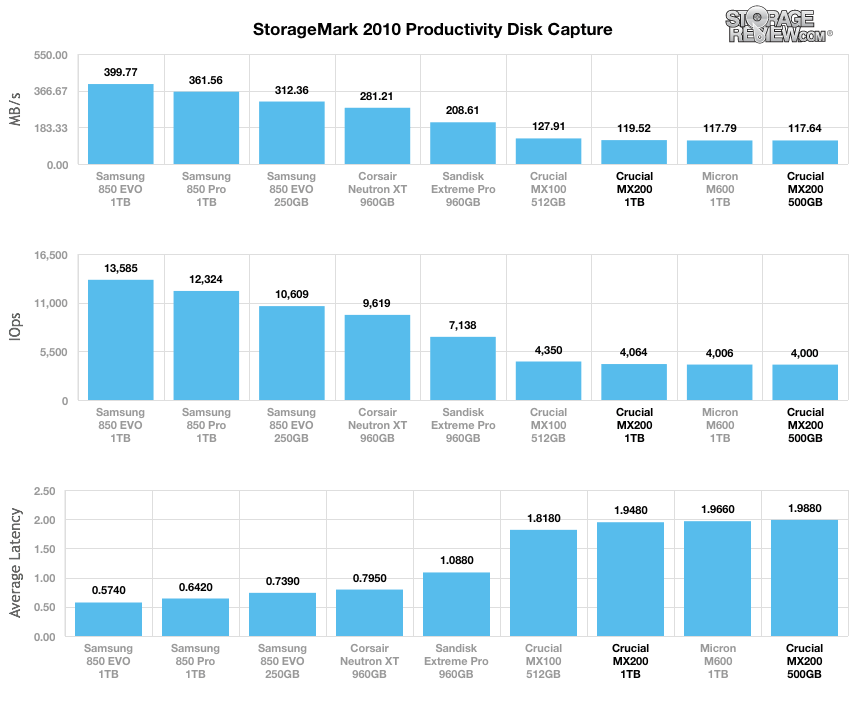 In our read-intensive Gaming trace, the Crucial MX200 actually gained on the MX100, with a speed of 458.93MB/s (1TB) and 461.44MB/s (500GB). That being said, virtually all comparables were very similar performance-wise with the exception of the Samsung drives, which led in throughput. 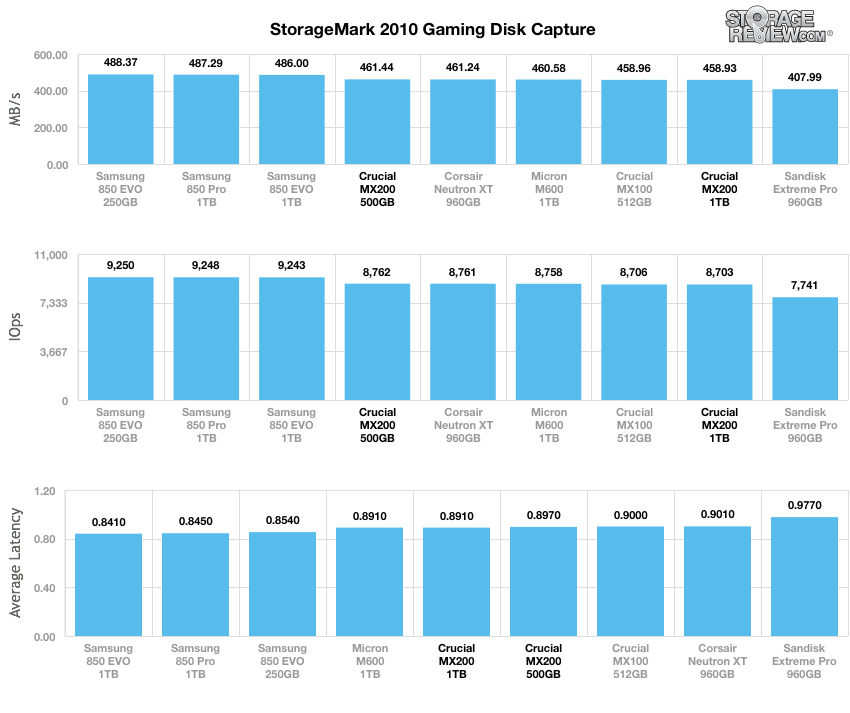 Low idle power is very important since consumer solid-state drives are in idle state during most of their lifespan. This is the opposite for enterprise drives, which are essentially always running.

The 1TB model had power numbers more in line with the MX100 (though still less), with an average idle consumption of 1.02 watts and a maximum of 4.11 watts during write activity.

The MX200 is Crucial’s newest line of consumer SSDs that target users looking for an economical upgrade to an SSD-based system for their laptops or PCs. The new SSDs are equipped with SATA 6Gb/s interface, Micron MLC NAND and the Marvell 88SS9189 controller. The MX200 comes in a variety of form factors; 2.5” 7mm, mSATA, M.2 Type 2260 and M.2 Type 2280, allowing it to apply to a variety of applications from Ultrabooks to specialized OEM needs. For more pedestrian needs, Crucial includes a handy 7mm-to-9.5mm adapter bracket as well as Acronis True Image cloning software, adding additional value to the MX200 package.

Beyond the top line specs, the drive heavily focuses on reliability and endurance. The MX200 incorporates the company’s Redundant Array of Independent NAND (RAIN) technology from Micron, offers a 1.5 million hours MTBF rating, Power Loss Protection, and Data Path Protection. Crucial has stated on many occasions that performance isn’t the main focus of their drives; ultra reliability is their main driving factor. All of this is possible in part due to Crucial using their own Micron NAND, which allows them to take full advantage of their own internal firmware team to develop a long lasting solution. All of these reliability features are also normally only found on enterprise-class drives, so consumers will be getting a lot out of these SSDs in terms of deep feature set.

Though the MX200 offers consumers with a ton of value and reliability, Crucial’s new SSD is a mixed bag when looking at its performance. In our sequential 2MB workloads, the Crucial 500GB MX200 had top performing read and write activity, with 498.61MB/s and 458.81MB/s, respectively. This was good enough for second place among our test consumer SSDs in the read column. Our random workload told a similar story, with the 500GB model taking top spot in reads. The 1TB model also performed well, reaching 488.17MB/s read and 451.203MB/s write (sequential).

However, the 1TB model’s performance took a serious hit once we put it through our 4k benchmarks. This trend continued during our server profile tests with the exception of workstation activity, in which both drives placed at the top of the leaderboards. Our real-world workloads showed performance well below par, with the MX100 outperforming its successor (both MX200 capacities took last place by a significant margin in the HTPC and Productivity scenarios). However, the MX200 picked up a bit in our read-intensive gaming benchmark. When looking at its power consumption, our tests showed that the MX200 showed serious improvement over the MX100 (the ~500GB models), with a maximum reading usage of only 2.51 watts compared to 4.16 watts of its predecessor. Overall, we weren’t too surprised with the performance results of the MX200, as Crucial drives have a history of generally doing well in synthetic workloads, only to fall off in traces. However, it was surprising that the MX100 outperformed its successor in several of our benchmarks, considering Crucial’s claim that the MX200 is improved in essentially every category.

At the end of the day though, if this is considered to be a mainstream SSD, buyers are generally more interested in price and reliability than performance. The MX200 carries a very affordable price tag at roughly $139 for the 250GB model and $249 for the 500GB model (which works out to be $0.5/GB) and that’s more or less street price (not promotional). Given the MX200 use case as an HDD replacement or embedded solution for an OEM, the performance is probably good enough and will have appeal to the mainstream and value buyers.

The Crucial MX200 has a lot to offer consumers with its impressive set of data reliability features (which are often only found in enterprise SSDs), low power consumption, and competitive price point. Though lacking in performance compared to other SSDs, many mainstream buyers will prefer data integrity and price to raw performance. In that case the MX200 will find itself deployed often.