A few months back, we reviewed the Crucial MX300 (750GB). And though we found it to be a bit inconsistent in the way of performance, it did produce good numbers in some areas and is certainly one of the more affordable high-capacity SSDs on the market today and a very viable choice for consumers. Crucial has added a 1050GB model to their MX300 line, which is certainly a welcomed addition.

A few months back, we reviewed the Crucial MX300 (750GB). And though we found it to be a bit inconsistent in the way of performance, it did produce good numbers in some areas and is certainly one of the more affordable high-capacity SSDs on the market today and a very viable choice for consumers. Crucial has added a 1050GB model to their MX300 line, which is certainly a welcomed addition. 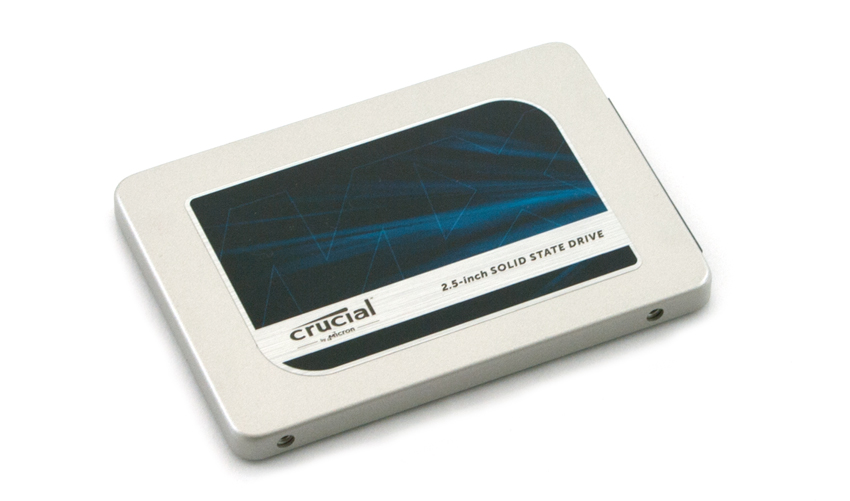 The new 1050GB model boasts much of the same specifications as its lower capacity brethren, such as its use of new Micron’s new 3D TLC NAND technology, which allow it to boast single-level cell endurance and triple-level cell density; this equates to some pretty good value for consumers. When it comes performance, Crucial quotes the exact same read and write transfer speeds of the 750GB model (530MB/s read and 510MB/s write, respectively) as well as an endurance rating of 220 TBW.

Though overheating is much less of an issue for solid-state technology compared to their spinning brothers, it still is important to be wary of. To this end, Crucial’s MX300 line comes with Adaptive Thermal Protection and Extreme Energy Efficiency technology, which dynamically adjusts storage component activity for cooler operation and less power consumption. The MX300 SSDs also leverage RAIN technology. This feature works much like a RAID configuration; however, RAIN stores bits of data on different places throughout the drive. Moreover, the drive also has exclusive data defense technology that helps to protect files from bit rot.

The 1050GB model looks identical to its smaller capacity brethren, following the same design scheme as the rest of Crucial’s SSDs. As such, the MX300 uses a stylized label sticker that displays the Crucial logo, product brand, and form-factor information. 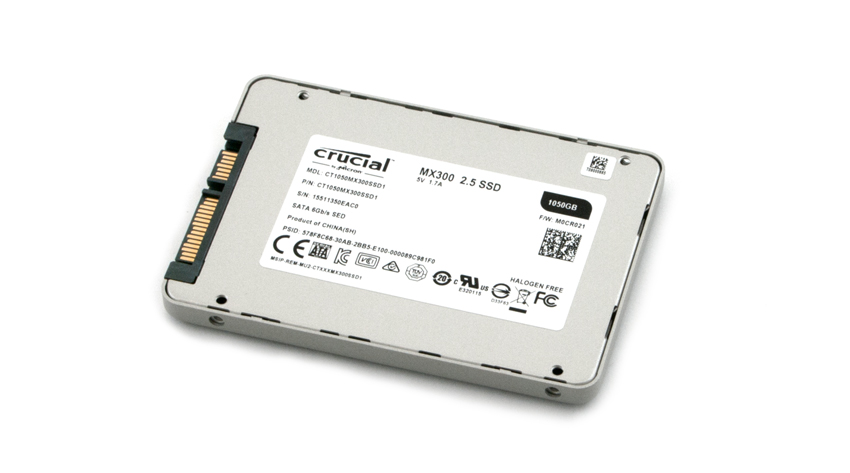 On the back side of the Crucial drive is another sticker with further information about the drive. This includes the model number, serial number, capacity, and form factor. 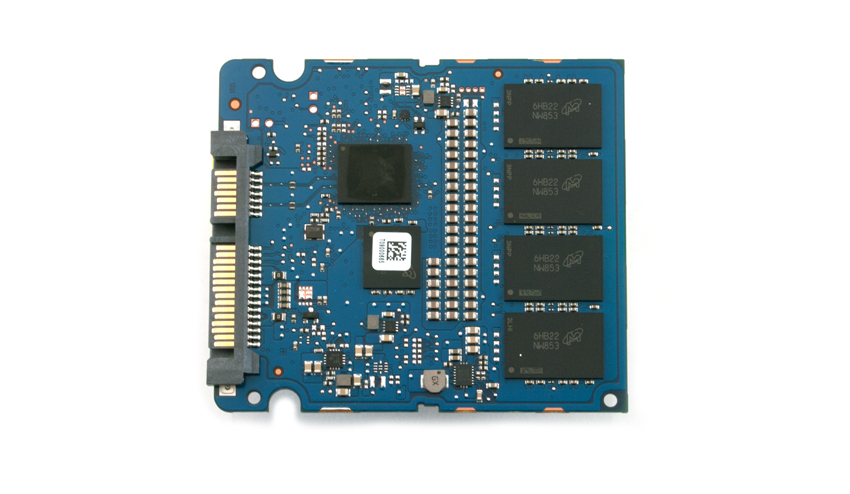 To remove the cover of the 1050GB MX300 and access the PCB, simply pull both the top and bottom apart (it is held together with tabs that run along the outer edges of the drive. 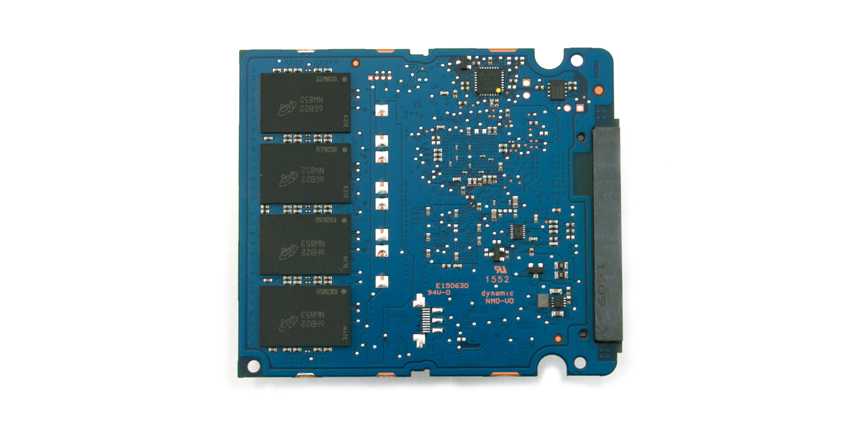 If you’re wondering about the odd capacity numbers (275GB, 525GB, 750GB, and 1050GB, which is different than virtually every SSD capacity points), there’s a reason behind this. Because Crucial leverages 384Gb TLC NAND rather than 256Gb, the MX300 drives have larger Raw NAND capacities than previous generations. Crucial indicated that once performance tuning had been completed for the MX300 drives, they made it a priority to give as much usable space to consumers as possible.

All consumer SSD benchmarks are conducted with the StorageReview HP Z620 Workstation. We compared the Crucial MX300 SSD high-capacity 1050GB SSD to the following drives:

In our 2MB sequential benchmark, the Crucial MX300 1050GB recorded a strong write activity with 460.67MB/s though it had the weakest read performance of the tested consumer SSDs (381.12MB/s). These results were slightly lower than the 750GB model, which posted 462.98MB/s and 397.55MB/s for writes and reads, respectively.

When looking at random 2MB transfers, the Crucial MX300 1050GB again found itself below its lower capacity brethren, reaching 372.52MB/s read and 460.67MB/s write. That being said, these results moved it up the leaderboard a tad.

Our random 4K benchmark puts more strain on the drives in terms of throughput. In this scenario, the Crucial MX300 1050GB found itself at the bottom of the pack in reads (26.75MB/s) and in the middle for writes (108.58MB/s). These results were a bit lower than the 750GB capacity once again, which posted 28.76MB/s and 108.58MB/s in reads and writes, respectively.

The results of our 4K write latency benchmark were more or less in line with its performance thus far. Here, the Crucial MX300’s 1050GB had an average write latency of 0.0358ms while max latency was recorded at 9.34ms. While the results of average latency were good across the board, max latency was a different story, as the OCZ Trion, Sandisk X400, and Plextor M7V were handily beaten by the rest of the consumer drives. 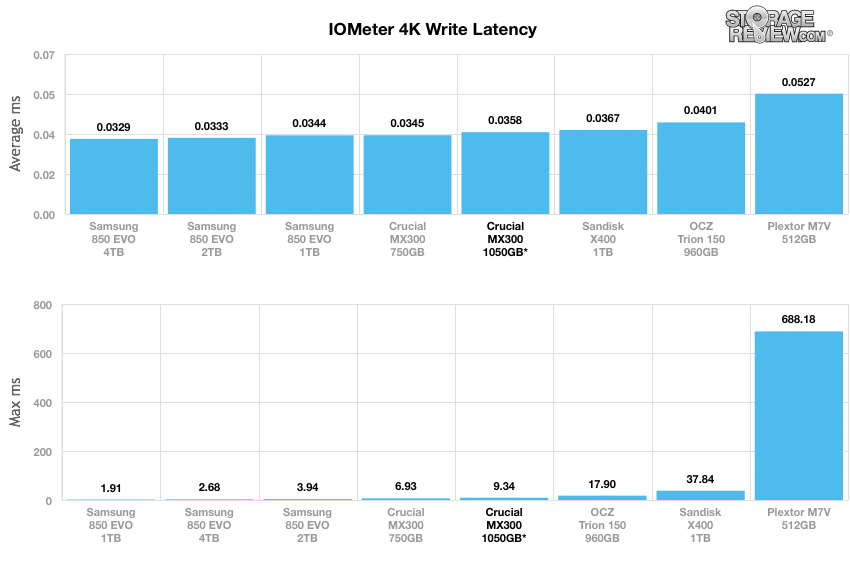 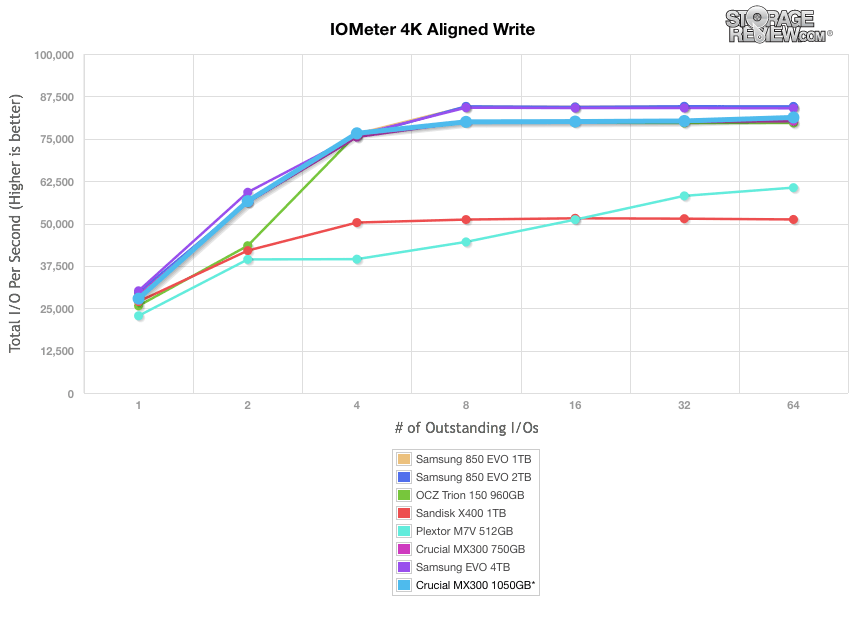 Results told a similar story in our aligned-read benchmark, posting an IOPS of 93,212.2 in the terminal. That said, the discrepancy between the Crucial MX300 and the leading Samsung EVO drives were a bit larger.

The database profile features a 67% read and 33% write workload, focusing on transfers around 8K in size. The Crucial MX300 1050GB was one of the more faster drives in this benchmark with 42,426.5 IOPS in the terminal. The top performer here was the Samsung EVO 4TB, which posted a 54,371.3 IOPS in the terminal. 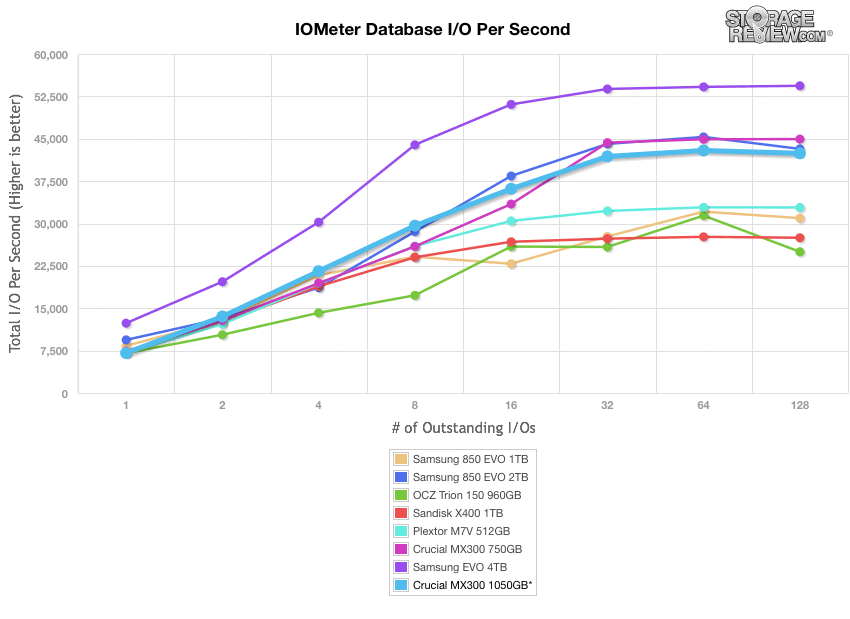 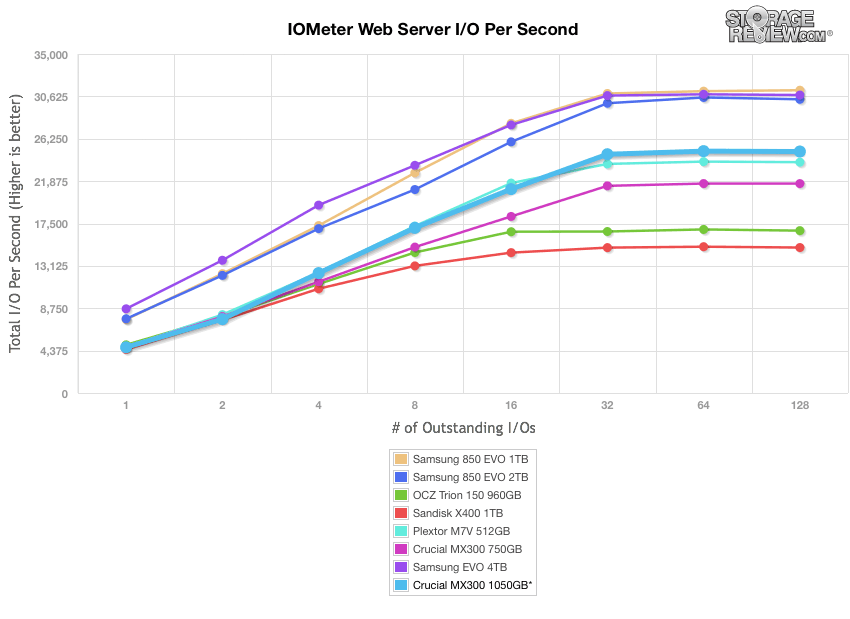 The file-server profile has 80% read and 20% write workload spread out over multiple transfer sizes ranging from 512-bytes to 64KB. Though the MX300 1050GB moved up a bit in the leaderboard (with 30,001.1 IOPS in the terminal) it was still far behind the next two best drives again, which posted 10,000 more IOPS. 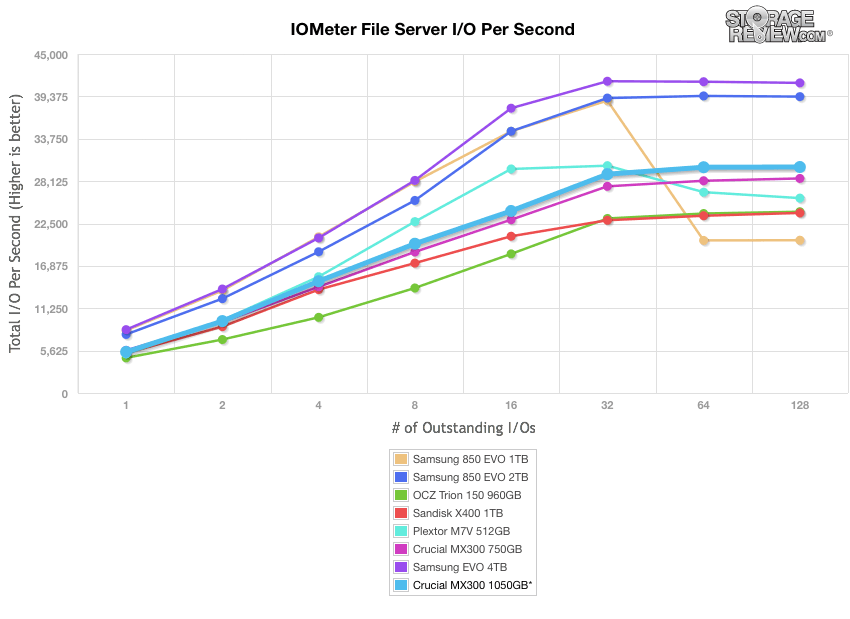 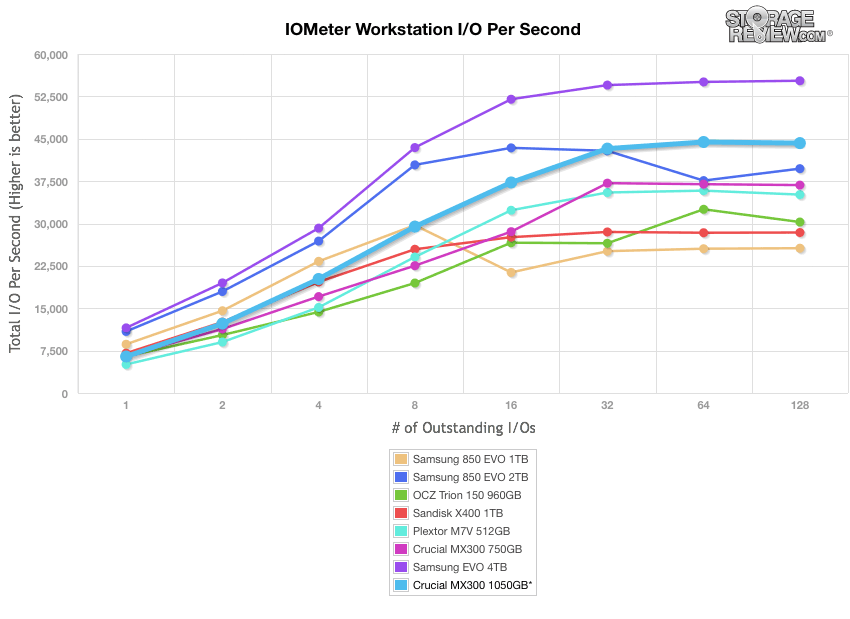 While the results of synthetic benchmarks are important in identifying the key strengths and weaknesses of a drive, performance in these tests does not always translate directly into real-world situations. To get a better idea how the high-capacity Crucial MX300 drive will handle itself in the field, we will chart StorageMark 2010 HTPC, Productivity, and Gaming traces against comparable drives. Higher IOPS and MB/s rates with lower latency times are preferred. 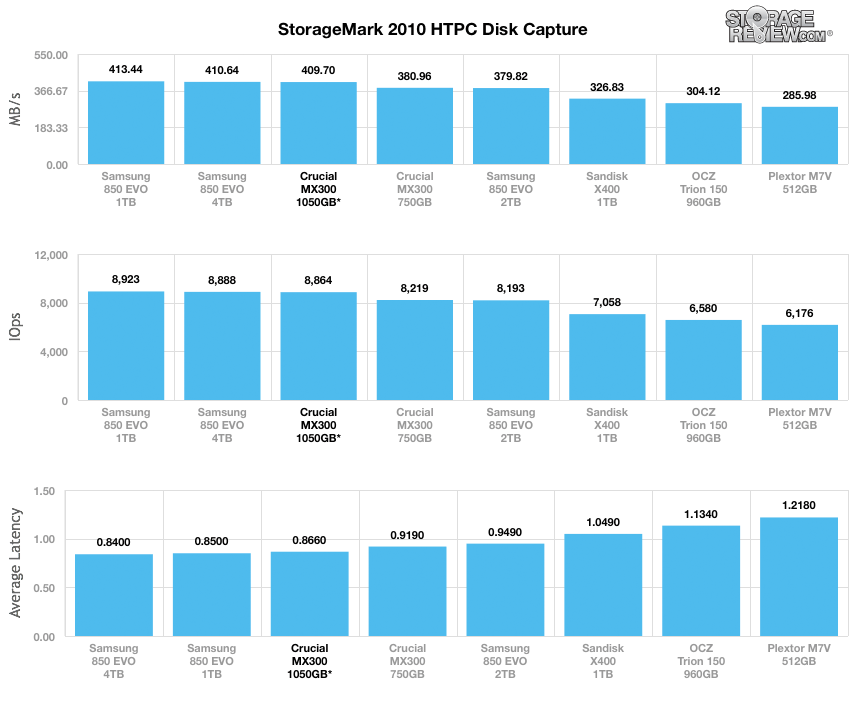 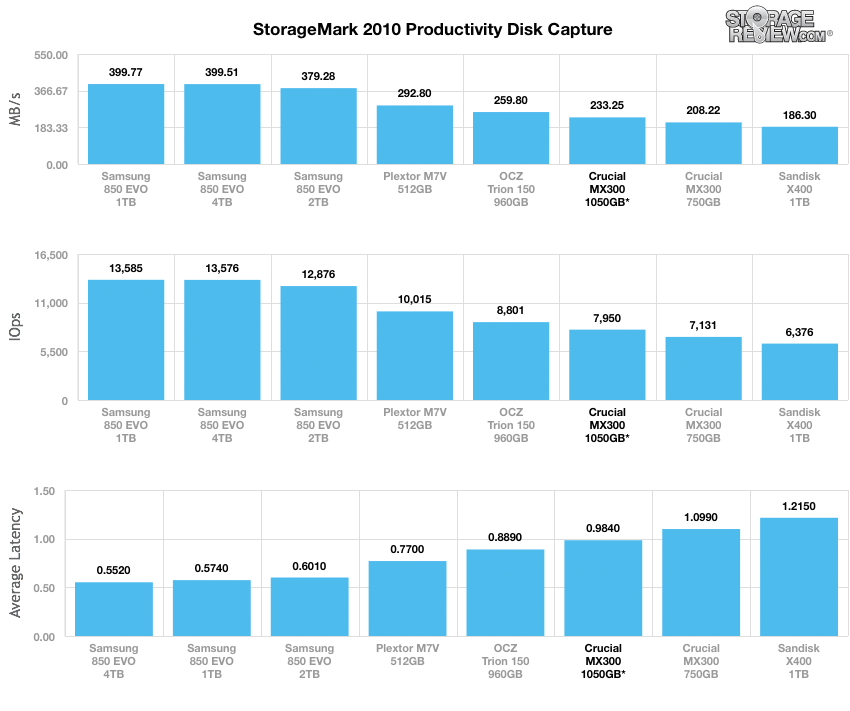 Crucial’s new 1050GB model is a welcomed addition to their MX300 line, as it’s always nice to see inexpensive, high-capacity SSDs hit the consumer market. Leveraging company’s 3D TLC NAND, the 1050GB MX300 provides consumers with even more density. Continuing the company’s trend to putting enterprise-like reliability features in their consumer drive, Crucial also provides embedded software to protect against bit rot and data loss while its use of Data Defense technology safeguards against data corruption and its Adaptive Thermal Protection for adaptive cooling. All of these features are coupled with a 3-year warranty, giving even more peace of mind to the consumer.

Though reliable in the longevity and hardware category, this wasn’t really the case when it came to performance. Though the 1050GB drive did record some respectable numbers in several of our workloads, it was most often outperformed by 750GB model. For example, during our 2MB sequential benchmark, the Crucial MX300 1050GB recorded pretty impressive write performance with 460.67MB/s; however, it had the weakest read performance of the tested consumer SSDs with 381.12MB/s. These results were slightly lower than the 750GB capacity, which posted 462.98MB/s and 397.55MB/s for writes and reads, respectively. The 1050GB found itself below its lower capacity during the random 2MB transfers as well, with 372.52MB/s read and 460.67MB/s write.

The Crucial SSD demonstrated inconsistent performance when looking at our consumer real-world benchmarks results as well. For instance, the 1050GB Crucial MX300 recorded very impressive numbers during our HTPC test with 8,864.09 IOPS, 409.7MB/s, and 0.866ms in average latency. This improved on the 750GB capacity in every way and placed it among the leaders. During the productivity benchmark, however, the Crucial MX300 1050GB placed at the bottom of the leaderboard, posting 7,950.42 IOPS, 233.25MB/s, and 0.984ms in average latency. It did perform better than its lower capacity model, however.

Uneven performance aside, this drive has a lot to offer. While certainly not designed for the media professional or prosumer, the reliability features and low price point of the MX300 ($260 for the 1050GB model) make for a very compelling option to mainstream consumers.

Though inconsistent in performance, the 1050GB MX300 offers mainstream consumers great reliability features and a huge storage-pool at a low price point.