The Dell EMC SC5020 fits with Dell EMC’s midrange storage portfolio and is available in a range of configurations including HDD, SSD and hybrid. Billed as a flexible workhorse for SMBs, the SC5020 doesn’t drop features/functionality to be price competitive. In fact, in terms of capabilities, the SC5020 is on par with the all-flash SC9000 we reviewed last year. The differences are mostly around top-end performance specifications, as the SC9000 has more RAM and CPU in the controllers and thus will have a much higher performance threshold. For its part, the SC5020 uses a 3U chassis with two hot-swappable controllers in an active/active configuration and 30 2.5″ drive bays. The system can be expanded with additional drive shelfs to support an additional 192 drives, topping the SC5020 out at over 2PB of maximum raw capacity.

The Dell EMC SC5020 fits with Dell EMC’s midrange storage portfolio and is available in a range of configurations including HDD, SSD and hybrid. Billed as a flexible workhorse for SMBs, the SC5020 doesn’t drop features/functionality to be price competitive. In fact, in terms of capabilities, the SC5020 is on par with the all-flash SC9000 we reviewed last year. The differences are mostly around top-end performance specifications, as the SC9000 has more RAM and CPU in the controllers and thus will have a much higher performance threshold. For its part, the SC5020 uses a 3U chassis with two hot-swappable controllers in an active/active configuration and 30 2.5″ drive bays. The system can be expanded with additional drive shelfs to support an additional 192 drives, topping the SC5020 out at over 2PB of maximum raw capacity.

To be appealing to the midrange market, arrays need to be flexible, efficient with good performance, and not break the bank. The SC5020 takes some of these ideas quite far. From a flexibility standpoint, users can have anywhere from 0-100% flash storage and change as their needs and demands change. The SC5020 fits nicely into the Dell EMC ecosystem, whether this is the direction a customer wants to move in or for customers that already have several other Dell EMC products under their wing. However, the biggest selling point would be the array’s efficiency. The array uses automation and tiering to lower costs of performance and intelligent data reduction to lower the cost of capacity. RAID can be set at multiple levels on the same drive to help match current activity levels or volume policies.

We’ve already previewed some of our SC5020 performance data, as we posted about the new SCOS 7.3 update this past summer. While point updates usually are more centered on bug fixes and minor functionality improvements, 7.3 brought with it a massive performance bump. SCOS, of course, also offers all of the enterprise data services expected like dedupe/compression, snapshots, replication, distributed sparing, encryption and so on. There’s plenty of third-party application support as well, including VMware, Microsoft, IBM, OpenStack, Oracle, Symantec, Commvault, Foglight and Docker. In terms of operational benefits, the SC5020 supports phone home, online non-disruptive firmware updates and Dell EMC’s CloudIQ analytics and monitoring tool. From a management perspective, the SC5020 offers HTML5 tools Unisphere for SC and Unisphere Central (multi-array management), as well as Dell Storage Manager (multi-array, multi-site, cross-platform management).

In this review, we revisit the data from the SCOS 7.3 update and post the rest of our performance data. The system under review is fully populated with write-intensive 800GB SSDs for a total capacity of over 20TB raw.

The Dell EMC SC5020 is a 3U storage array that comes with one of the stylish bezels the company is known for. Beneath the bezel are the 30 hot-swap, 2.5” drive bays. On the right side of the device are the power indicator, status indicator, and identification button.

Flipping around to the rear of the device, one can easily see the two power supplies and fans on either side. The two storage controllers are stacked one atop the other in the middle. Each controller contains an I/O care slot (that we populated with Fibre Channel cards), four iSCSI ports, two mini-SAS ports, a USB 2.0 port, a management port, and a serial port.

Part of the update to SCOS 7.3 brings Unisphere and all of its benefits to the SC Series. Unisphere is an HTML5 UI that is sleeker and more intuitive than the previously used Dell Storage Manager. 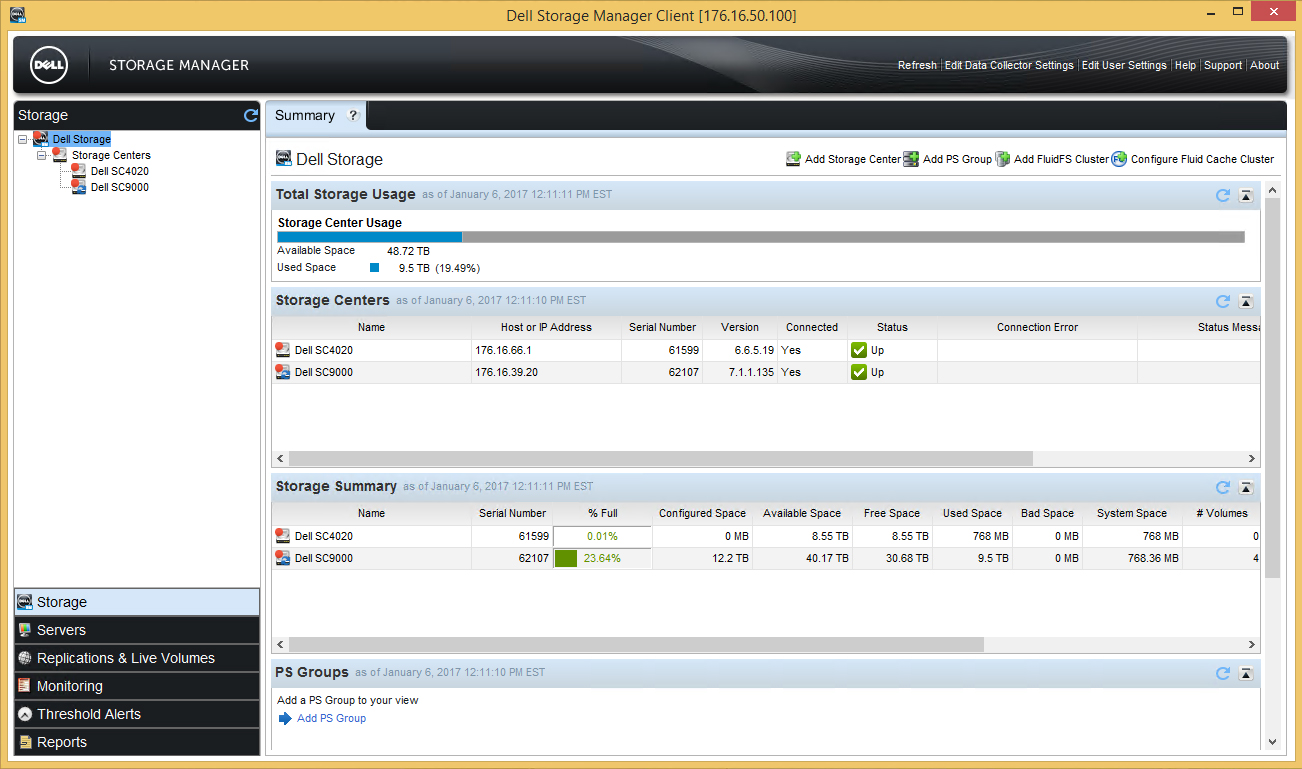 Signing in brings users to the Summary page. As the name implies, this page gives admins a run down of what is happening on the SC5020. Along the left side are several tabs (Storage, System, Data Mobility, Monitoring, and Reports) with their own sub-tabs. 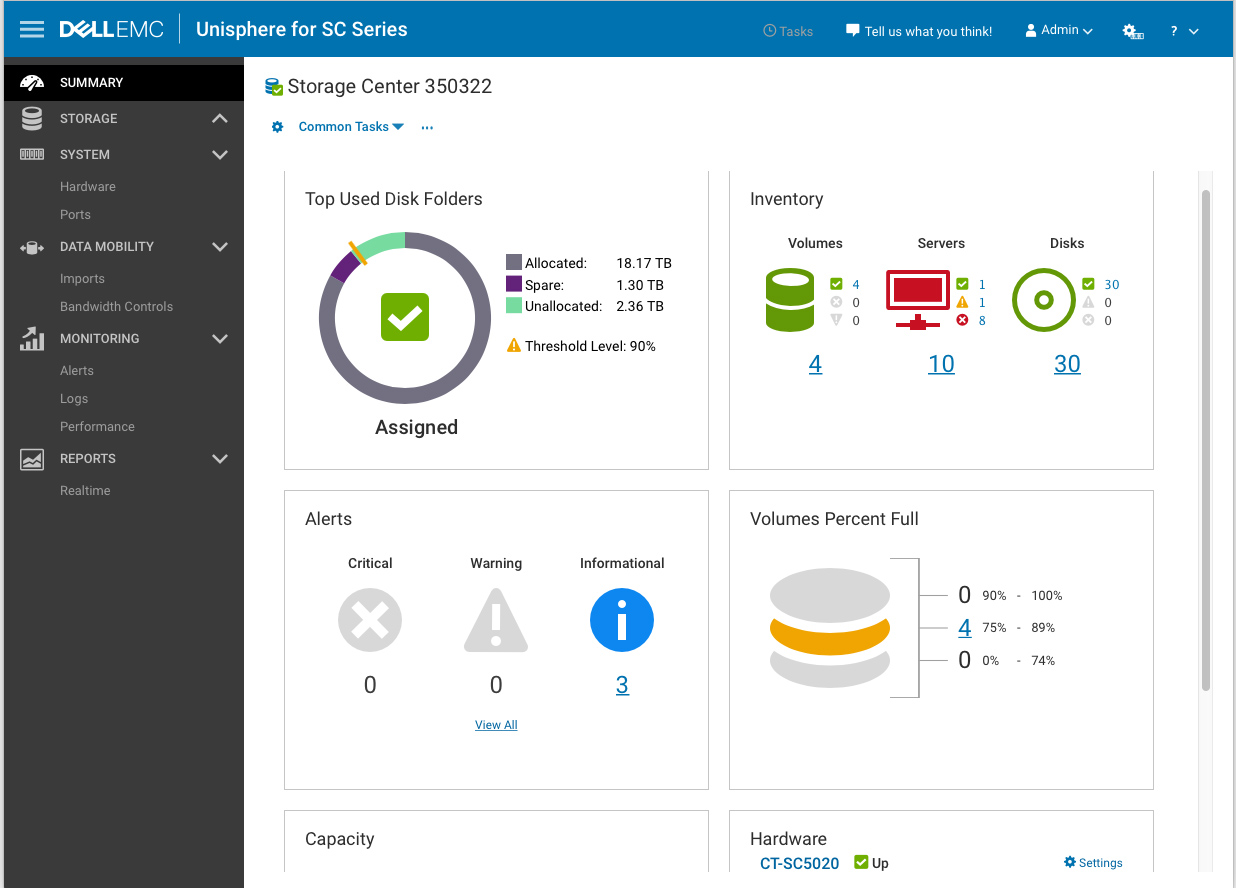 The Storage tab has several sub-tabs including Volumes, Servers, Profiles, Disks, and Storage Types. Under the Volumes sub-tab, admins can quickly see their existing volumes along with pertinent information about them, as well as the ability to create new volumes or delete existing ones. 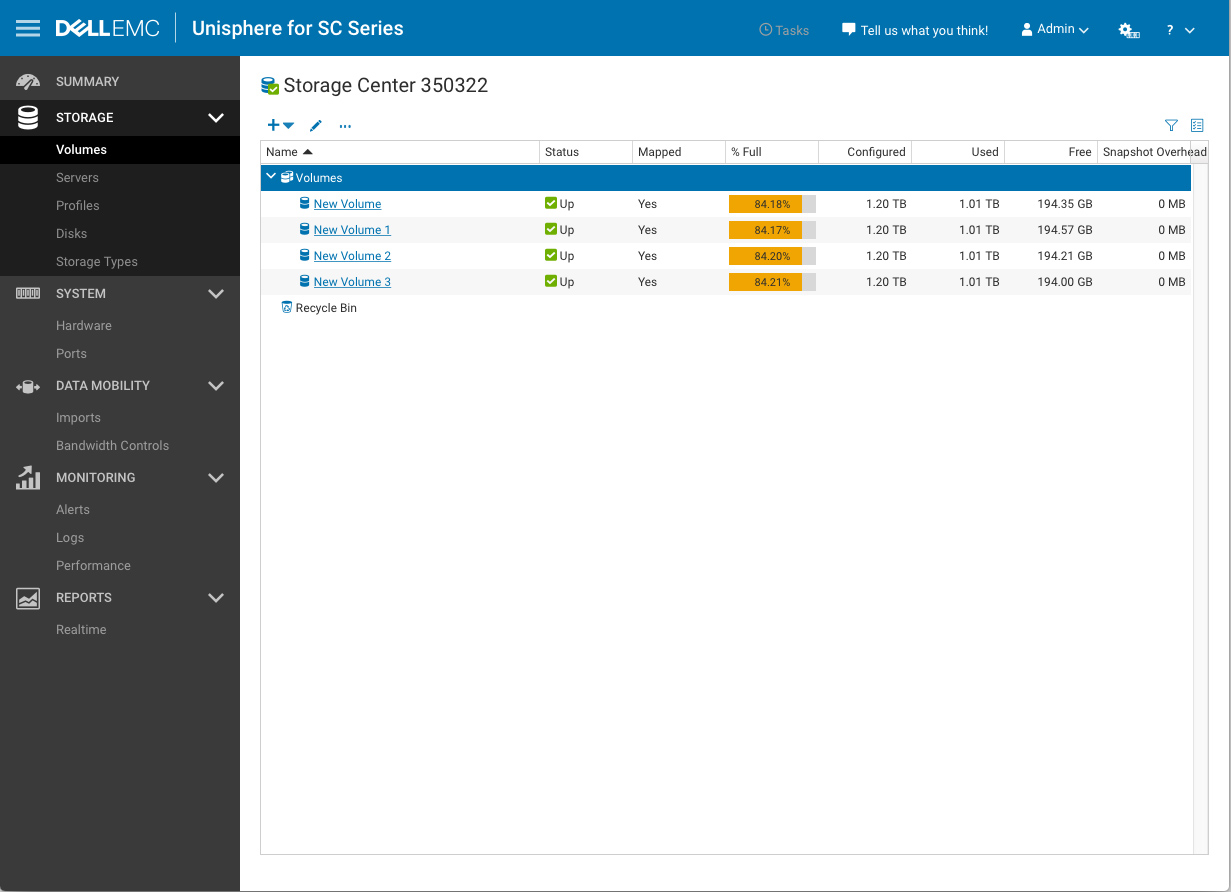 The Disks sub-tab lists out the disks as well as total capacity with allocated versus unallocated and has a graphical representation at the bottom. Admins can add more disks and rebalance RAID through this sub-tab. 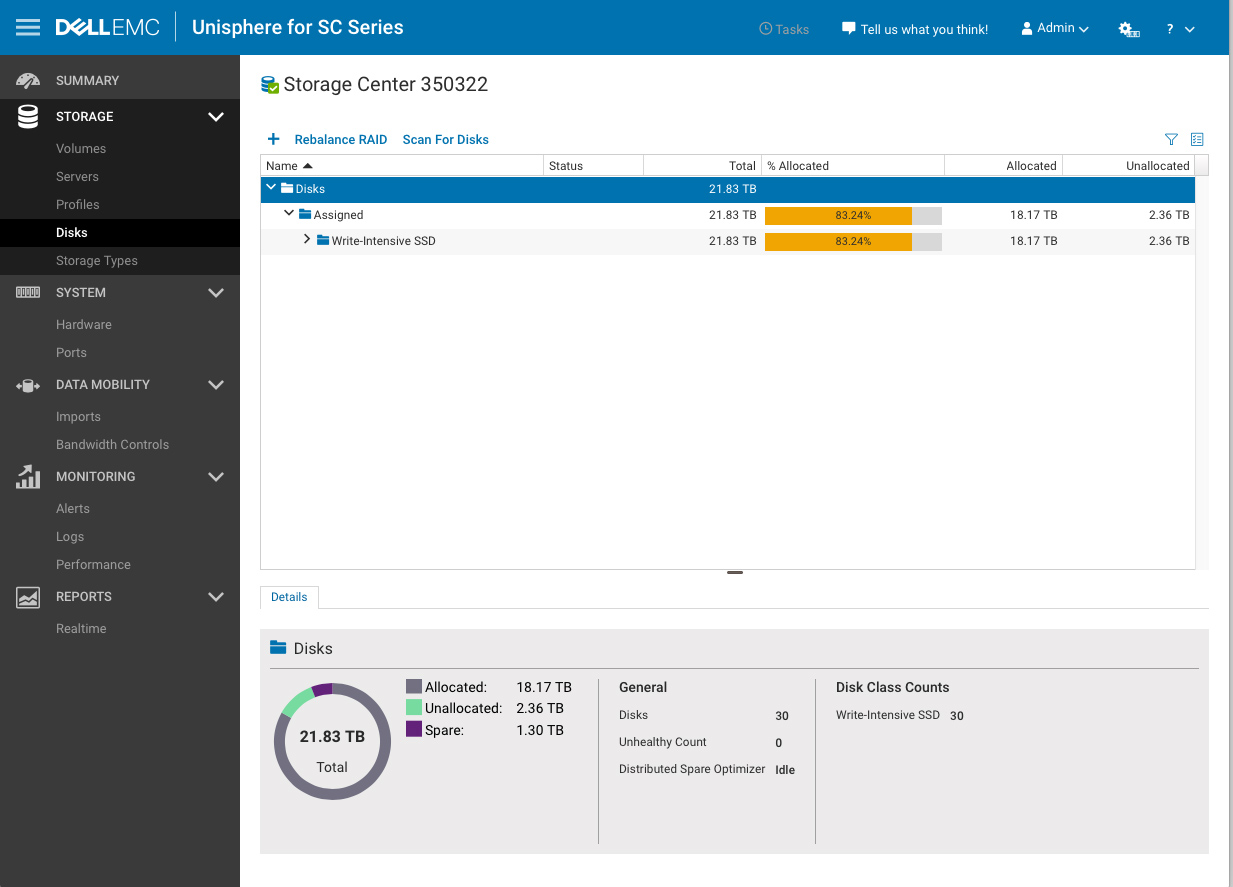 With the Storage Types sub-tab, admins can easily see tiers, volumes, as well as pressure reports. And they can set up storage between assigned and redundant. 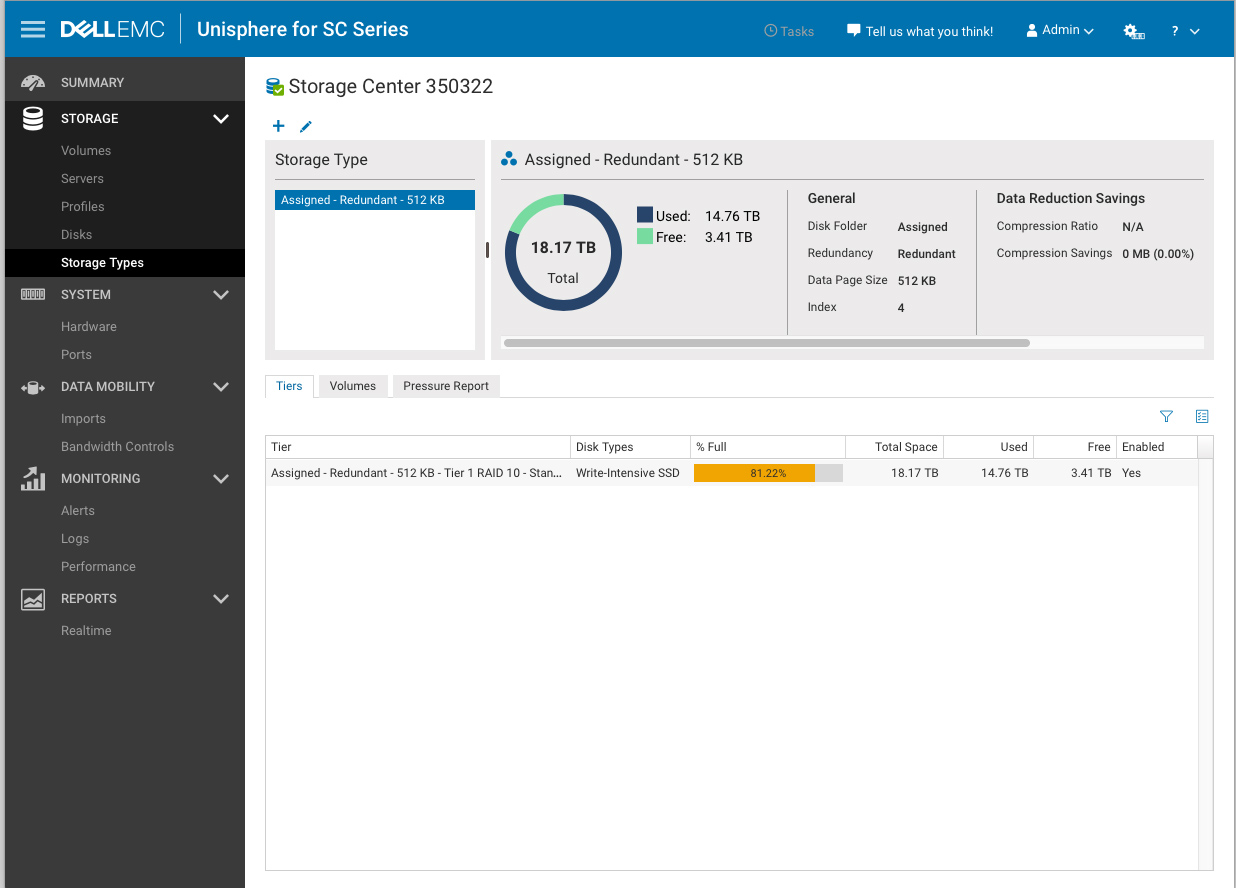 The System tab has two sub-tabs: Hardware and Ports. The Hardware sub-tab gives admins a quick overview of the system and its components and allows users to drill down into each part through Storage Center. 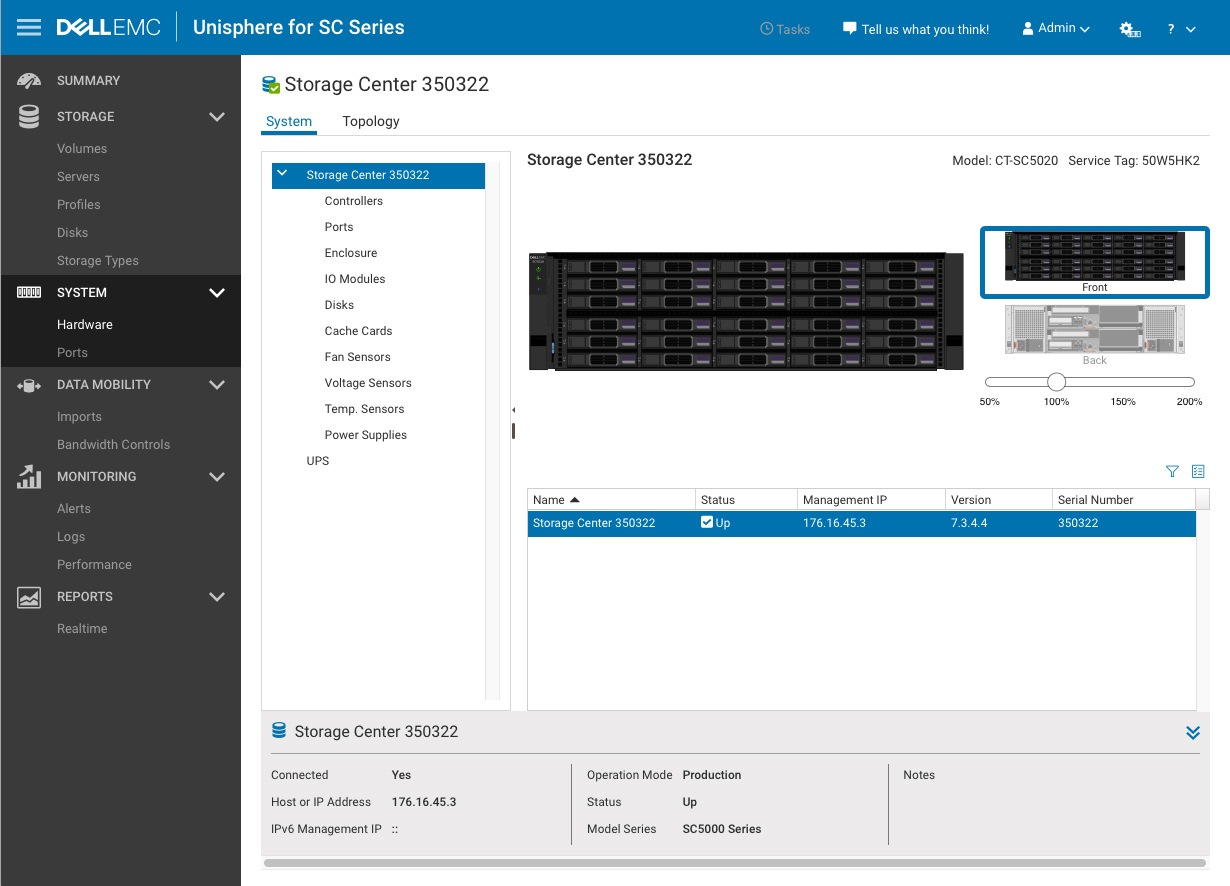 The Monitoring tab has three sub-tabs: Alerts, Logs, and Performance. With the performance sub-tab we can easily see the performance within a given range of time in both MB/s and IOPS on either the front or back end. 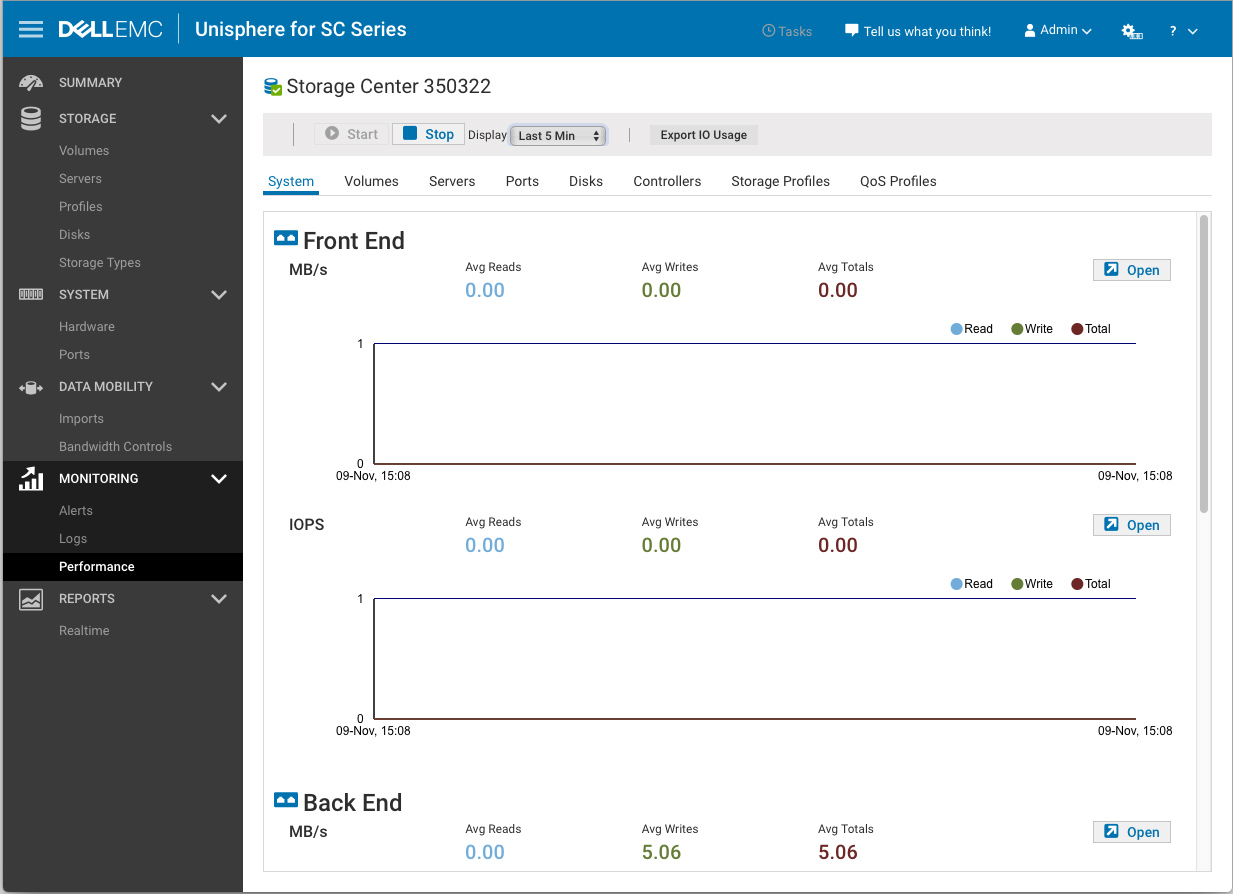 Across all of our performance testing, we leveraged a total of eight 16Gb FC ports connected through a dual 16Gb FC switch fabric.

The application workload benchmarks for the Dell EMC SC5020 consist of the MySQL OLTP performance via SysBench and Microsoft SQL Server OLTP performance with a simulated TPC-C workload. In each scenario, we had the array configured with 30 800GB Write Intensive SSDs, using volumes provisioned with a Tier 1 RAID10 storage profile. Four volumes were then created, balanced across both storage controllers. In our testing environment, this created a balanced load for our SQL and Sysbench workloads.

This test uses SQL Server 2014 running on Windows Server 2012 R2 guest VMs, and is stressed by Quest’s Benchmark Factory for Databases. While our traditional usage of this benchmark has been to test large 3,000-scale databases on local or shared storage, in this iteration we focus on spreading out four 1,500-scale databases evenly across the storage array.

With SQL Server average latency, the SC5020 had an aggregate score of 7ms with individual VMs ranging from 6ms to 8ms.

Each Sysbench VM is configured with three vDisks: one for boot (~92GB), one with the pre-built database (~447GB), and the third for the database under test (270GB). From a system-resource perspective, we configured each VM with 16 vCPUs, 60GB of DRAM and leveraged the LSI Logic SAS SCSI controller. Load gen systems are Dell R740xd servers.

When it comes to benchmarking storage arrays, application testing is best, and synthetic testing comes in second place. While not a perfect representation of actual workloads, synthetic tests do help to baseline storage devices with a repeatability factor that makes it easy to do apples-to-apples comparison between competing solutions. These workloads offer a range of different testing profiles ranging from “four corners” tests, common database transfer size tests, as well as trace captures from different VDI environments. All of these tests leverage the common vdBench workload generator, with a scripting engine to automate and capture results over a large compute testing cluster. This allows us to repeat the same workloads across a wide range of storage devices, including flash arrays and individual storage devices. On the array side, we use our cluster of Dell PowerEdge R740xd servers attached to eight Tier 1 RAID10 volumes provisioned from the Dell EMC SC5020.

Sequential 4K performance from SCOS 7.3 continued to show strong improvements in sequential 4K rear performance, allowing the unit to push out to 1.37M IOPS, whereas the one running 7.2 measured 1.01M IOPS.

Again, in our write test measuring 4K sequential performance, we saw SCOS 7.3 push out beyond 500K IOPS, improving beyond the 326k IOPS measured from the older SCOS 7.2.

The Dell EMC SC5020 is one of the company’s midrange storage arrays that can be configured with HDDs, SSDs, and in a hybrid setup. The 3U SC5020 is designed for SMBs that need higher levels of performance and capacity, with a max raw of 2PB with expansion enclosures. The array provides HA with two active/active hot-swappable controllers. The SC5020 can help customers lower costs and be more efficient through intelligent data reduction and RAID and storage tiering that allows it to respond to current needs. And the latest update of SCOS to 7.3 brings Unisphere to the array, a more intuitive UI with more benefits.

We’re clearly excited about the performance profile the all-flash SC5020 array offers; and that doesn’t even factor in that its pricing profile is very good too. It’s simply astounding to see what Dell EMC has done with a “point release” of the underlying SCOS. Furthermore, with SCOS 7.3, users get access to a much more modern look and feel with Unisphere, bringing SC storage management more current. While Unity is obviously a great product for Dell EMC, it’s refreshing to see the company’s continued commitment to the SC storage family as well. We continue to have tremendous respect for the Dell EMC SC Storage family and specifically, the SC5020.