VxRail is part of Dell EMC’s hyper-converged infrastructure offerings, bringing together a streamlined hardware, operating system, and software stack for implementing VMware vSAN. The VxRail family competes in a marketplace where other major vendors offer two paths to hyper-converged infrastructure: either vendor-specific systems or vSAN ready nodes. VxRail takes a third route, making it as straightforward as possible to deploy vSAN via dedicated appliance nodes with tight VMware integration, rigorous component testing and single-vendor support. Our aim in this portion of our vSAN coverage is to highlight the benefits of VxRail when it comes to deploying vSAN in an organization.

VxRail is part of Dell EMC’s hyper-converged infrastructure offerings, bringing together a streamlined hardware, operating system, and software stack for implementing VMware vSAN. The VxRail family competes in a marketplace where other major vendors offer two paths to hyper-converged infrastructure: either vendor-specific systems or vSAN ready nodes. VxRail takes a third route, making it as straightforward as possible to deploy vSAN via dedicated appliance nodes with tight VMware integration, rigorous component testing and single-vendor support. Our aim in this portion of our vSAN coverage is to highlight the benefits of VxRail when it comes to deploying vSAN in an organization.

Dell EMC touts its engineering partnership with VMware as the springboard for the VxRail Appliance. This appliance is the result of an especially close integration between VMware vSAN and the deployment services and ongoing support from Dell EMC. And VxRail takes the vSAN approach a step further, with additional software that makes the transition to hyper-converged storage even easier. Much of this is geared towards making the initial deployment and long-term management of the platform easier, as well as bringing additional software components into the mix through a data-services marketplace. A good visualization of the difference between the positioning of vSAN Ready Nodes and VxRail can be seen in the graphic below.

In addition to providing vSAN as the storage management platform, this close VMware integration allows VxRail to offer a suite of built-in data protection functionality from both the Dell EMC and VMware portfolios. This includes Active/Active stretched clusters with continuous availability, Dell EMC RecoverPoint for Virtual Machines with point-in-time recovery, vSphere point-in-time replication, and vSphere deduplicated backup and recovery.

One of the challenges facing the continued adoption of converged infrastructure as the paradigm for enterprise storage is the need to deploy resources in physical locations where the technical and human resources of the datacenter are not readily available. Dell EMC wants to make it painless for companies not only to deploy VxRail Appliances, but also to leverage the benefits of software-defined storage management and close integration with VMware without as much on-site management. We will be focusing on this aspect of the administrator experience, based on our preliminary work with a third-generation VxRail Appliance.

VxRail aims to simplify the deployment of remote, small data centers, and other locations with their “engineered” hyper-converged infrastructure. The concept is also attractive for starting a new deployment with an architecture that has an upgrade path from appliance scale to rack scale and upward.

Dell EMC conceptualizes their converged infrastructure offerings as three families that can be deployed independently or in tandem. At the largest scales and with the most intensive architecture and data service requirements lay Dell EMC’s vBlock and VxBlock. These “Block” offerings are built with VMware virtualization, Cisco networking and compute, and Dell EMC storage arrays. VxBlock offers flexibility with a choice of network virtualization from VMware NSX or Cisco ACI. Block architectures implement Cisco UCS server blades as ESXi hosts for the converged compute layer.

Between the Block family and VxRail lies VxRack, an architecture that scales linearly with the addition of up to more than one thousand nodes. VxRack uses a leaf-spine network architecture and implements ScaleIO or VMware Cloud Foundation for software-defined storage and deployment of a virtualized NSX network layer over the physical network.

At price points for a cluster that start below $45,000, a VxRail appliance is the third leg of the stool. VxRail can be configured as a stand-alone cluster or as the beginning of a deployment that can also scale up to thousands of nodes. Hybrid VxRail appliances include magnetic storage with high performance, high endurance solid state drives for read/write caching, while all-flash appliances can offer up to 76TB of unformatted capacity. Note that only SAS drives in pre-certified “rafts” are available for VxRail, one of the differences between VxRail and vSAN-ready server nodes.

This preview is based on our experience deploying and administrating a 3rd-generation, 24-bay 2U 4-node all-flash VxRail appliance. VxRail is one of the many product lines that has been impacted by Dell’s acquisition of EMC. The next generation VxRail systems became available at the end of 2016 and mark a transition to PowerEdge hardware. We will benchmark a 4th generation VxRail appliance in a full performance review later this year. 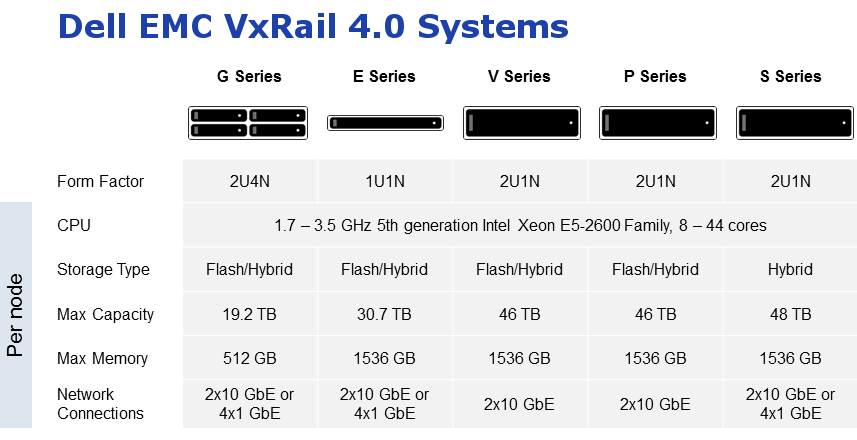 VxRail deployments range from a minimum of 3 nodes up to 64 nodes per cluster, with VxRail appliances available in single-node and four-node form factors. Each VxRail node is a server with access to its drive bays as direct-attached storage. VxRail 4.0 nodes feature up to 2 processors and 16 drive bays per node. These drive bays can be configured as all-flash or hybrid storage, but all of the nodes in a VxRail cluster must be all hybrid or all flash. Dell EMC does mandate a particular network architecture or components for VxRail. Dual socket VxRail appliances require 10GbE networking, while single socket appliances additionally support gigabit Ethernet. One other cluster deployment condition also applies: the first four nodes in a cluster must be identical.

Streamlined deployment is a key part of the VxRail proposition. Other vendors generally offer vSAN-ready nodes, but significant legwork remains to get them online or integrated into an existing VMware infrastructure. By investing substantial resources in the management and deployment of VMware vSAN, VxRail promises to make it simpler to administer and scale hyper-converged infrastructure. This article will serve partly as an overview of our experience with VxRail as we integrated it into the StorageReview Enterprise Test Lab. 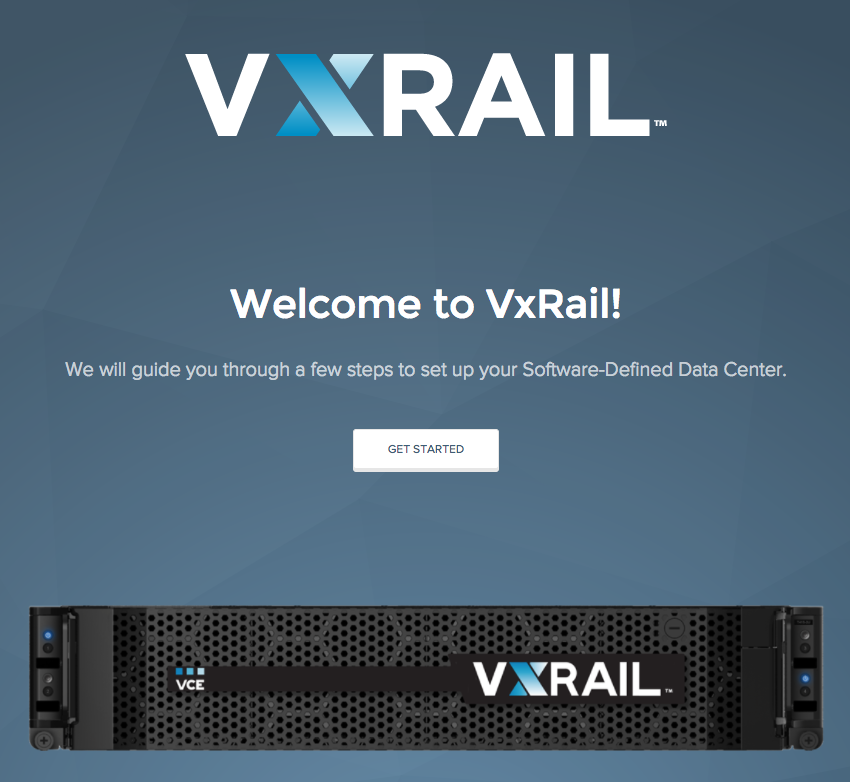 After racking the VxRail system, we cabled it to our Mellanox SX1036 switch and verified that multicast support was enabled. Next we used the nodes built in KVMs to verify that they passed their initial hardware checks. From here on, we were entirely within VxRail’s management environment. Deployment can be done interactively with a browser-based tool. Alternatively, a pre-generated JSON-formatted configuration file can be loaded for many individual appliances so that VxRails are deployed with essential settings already in place such as: IP addresses for the management interface, vMotion, management, and vCenter (if the latter already exists in the customer’s environment). 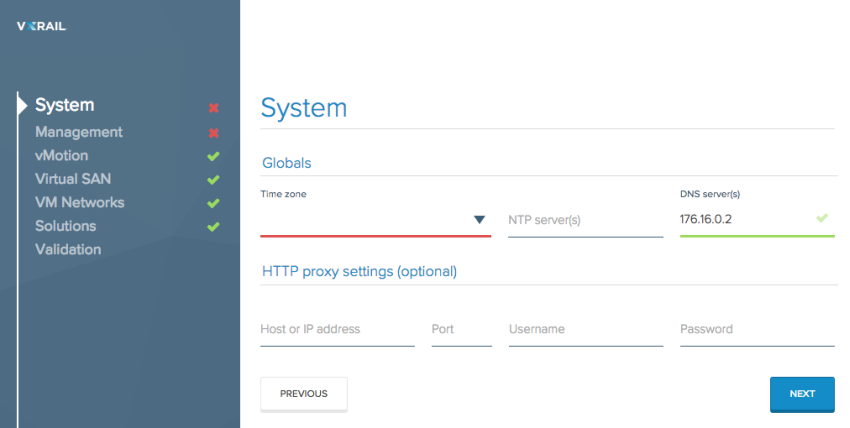 This pre-deployment workflow leads the administrator through a series of tasks such as creating users and checking that versions are compatible. In addition to its role in eliminating repetitive tasks, the process of the deployment wizard is one of the ways that Dell EMC Support assists customers with deployment. We found it to be concise and intuitive as the paradigm is a series of red Xs that change to green checkmarks as required configuration tabs and data fields are populated. 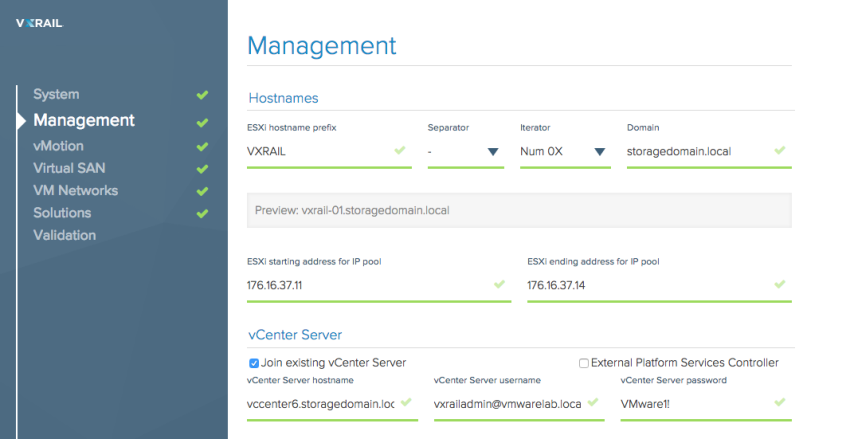 A validation function tests the configuration that the administrator has entered and makes sure there is good communication between the nodes and top-of-rack switch. This step took about five minutes, and in our case, it discovered a “fat finger” error with our entries that would have caused troubleshooting problems later. The validator also pointed out a connectivity issue related to our firewall. All of these issues are much easier resolved at this point through VxRail Manager than later if deploying vSAN manually.

After a period of processing, reflected by an animated display in the browser interface, the VxRail system is ready to be accessed. 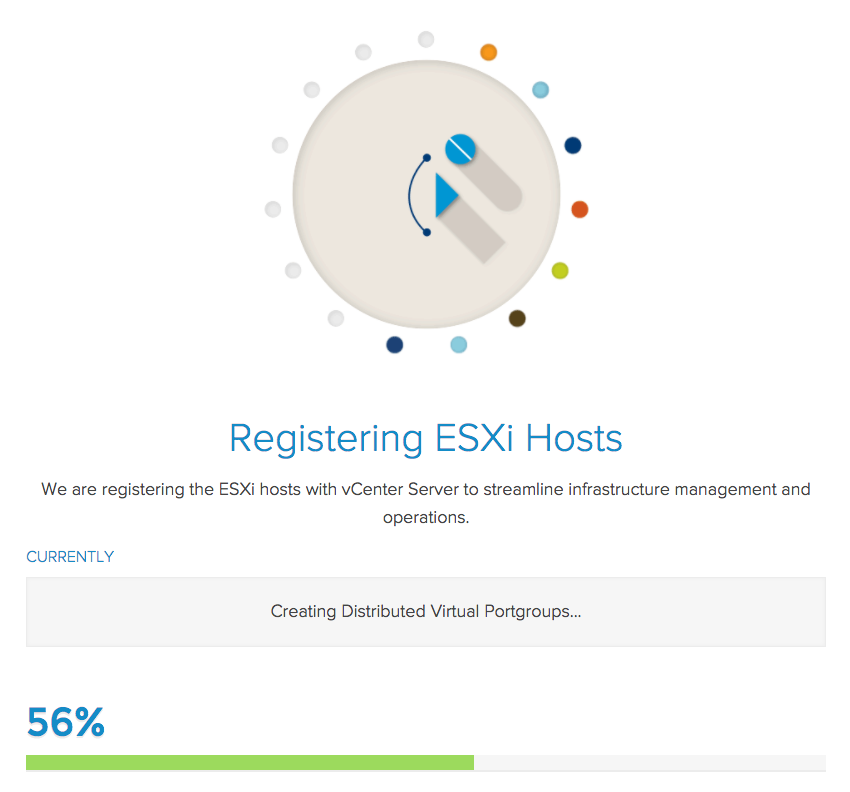 VxRail Manager is the primary management system for the VxRail appliances and arrives pre-installed as a virtual machine that can be accessed with a browser at the VxRail Manager address or DNS host name that was configured during deployment. The VxRail Manager dashboard provides information on storage, CPU, and memory utilization at the cluster, appliance, or node level. 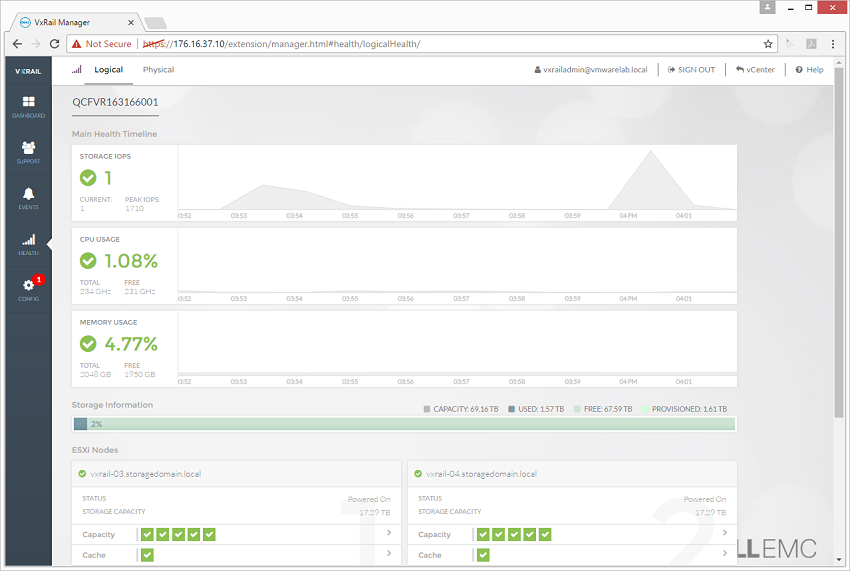 VxRail Manager offers non-disruptive addition of appliances and nodes. It also incorporates usability features like a wizard to assist administrators in replacing a failed drive without disrupting availability, although the workflow has different implications than swapping drives within VMware vSAN. Users select the disk they want to replace (below we highlight one unfailed drive manually selected for replacement) and follow the steps the VxRail manager guides you through. 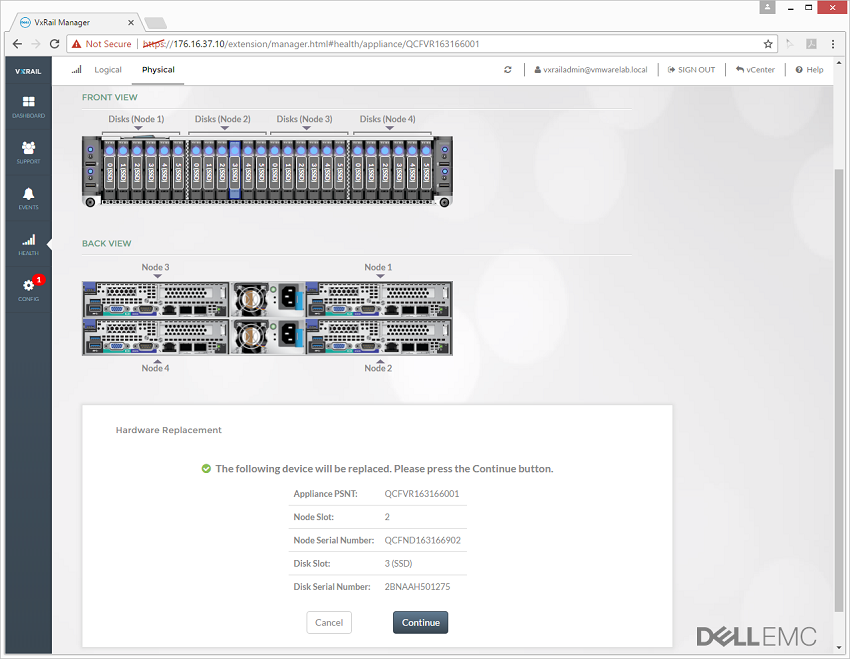 VxRail Manager helps facilitate the service and support relationship with Dell EMC.  The management VM incorporates EMC Software Remote Service (ESRS) with call home and proactive two-way connections for monitoring and service. ESRS allows administrators at a home office to support offsite appliances, while also serving as the gateway for customers to work with Dell EMC online chat support and field-service assistance. VxRail appliances are offered with a minimum of one year of support, although three-year support packages are more common. 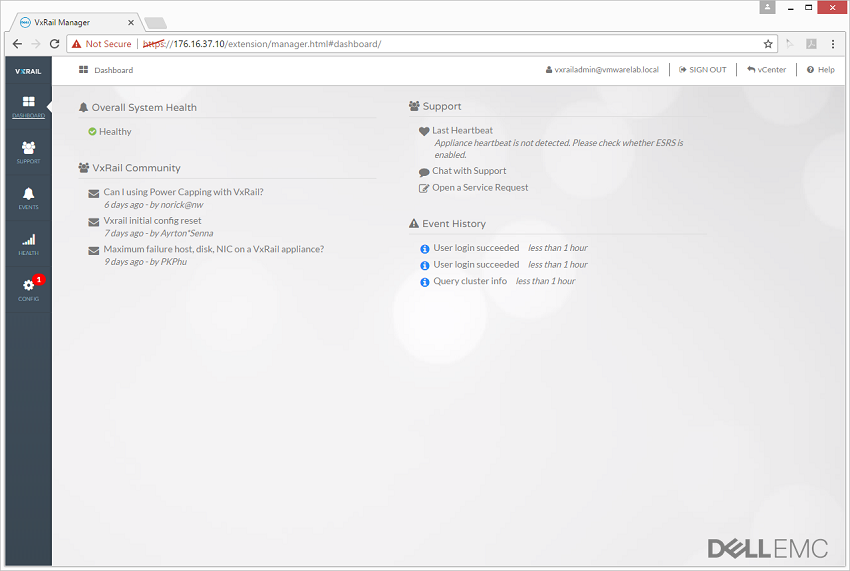 The VxRail offers its own version of an app store simply called the VxRail Market. Under the Config main tab, there are three sub-tabs running across the top, with the middle tab being the Market. Some of the app options include: CloudArray Virtual Edition, ENZO Smartnode OVF, PostGreSQL, RecoverPoint for Virtual Machines, Sugar CRM, Tomcat, vSphere Data Protection, and WordPress. Some of these apps are available for free, others require a license. 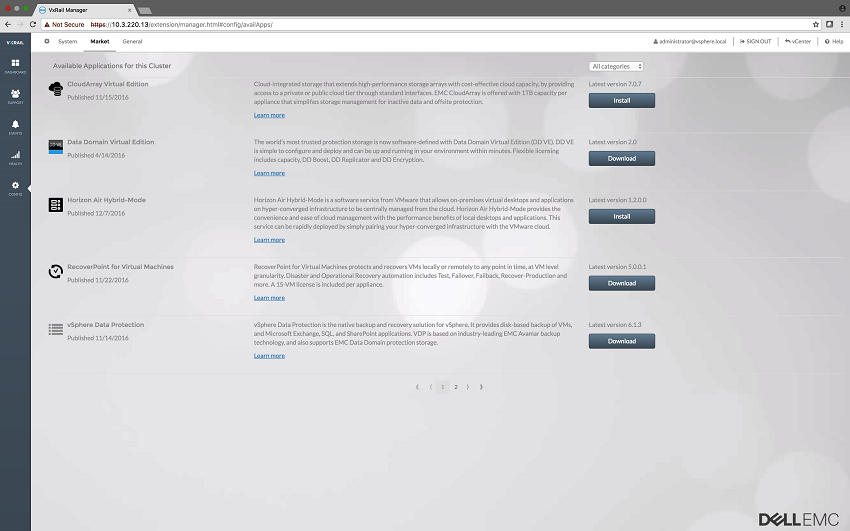 Dell EMC VxRail presents itself as more than the marriage between two product lines. VMware’s vSAN is a driving force for hardware-agnostic hyper-converged infrastructure. While the VMware Ready Node program supports hundreds of servers and configurations (Dell server options included), Dell EMC took vSAN one step further in VxRAil. However, the selling point for VxRail 4.0 is more than vSAN running on PowerEdge hardware. VxRail is an optimized and integrated software environment, a streamlined deployment experience, and single-vendor support. The net result is vSAN in its easiest-to-consume and support form.

In the coming weeks, we will begin a full evaluation of one of the new PowerEdge-based VxRail 4.0 appliances. In the meantime, we took advantage of access to a VxRail 3.5 appliance — upgraded to the VxRail 4.0 software — to focus our attention on the deployment and management experience. From beginning to end, the deployment process was smooth, polished, and quick. The deployment wizard even caught a subtle error in the configuration we entered that was easier to repair up front than after the fact. Once up and running, the VxRail Manager provides a useful visualization of the vSAN environment and provides access to deployable applications like Data Domain Virtual Edition and RecoverPoint.

Our first impression of VxRail is that it lives up to its promise of streamlined, modular deployment. We look forward to our forthcoming opportunity to put a new PowerEdge-based VxRail 4.0 system through our benchmark protocol in the near future.