The 7000 series used to be Dell’s range-topping Latitude, but the new Latitude 9000 series takes features and quality one step further. We look at the new Latitude 9430 2-in-1, a hybrid laptop with a 14-inch screen, Intel “Alder Lake” processors, and the latest in privacy technology.

The 7000 series used to be Dell’s range-topping Latitude, but the new Latitude 9000 series takes features and quality one step further. We look at the new Latitude 9430 2-in-1, a hybrid laptop with a 14-inch screen, Intel “Alder Lake” processors, and the latest in privacy technology.

The Latitude 9430 is available as a traditional clamshell laptop or, as we’re reviewing it, a hybrid 2-in-1. The hybrid model’s 360-degree hinges allow its screen to rotate 180 degrees.

The Latitude 9430 is based on Intel’s 12th generation Core (“Alder Lake”) processors, specifically U-class chips up to a Core i7, with two Performance cores, Intel Iris Xe integrated graphics, and Intel vPro remote management. Memory is 16GB or 32GB of LPDDR5 (soldered). Storage is limited to a single M.2 2230 PCI Express drive up to 1TB.

The Latitude 9430 2-in-1’s full specifications are as follows:

The Latitude 9430 blends style and business. Its dark gray chassis is all metal and of very high quality. None of its surfaces flex even under strong pressure. 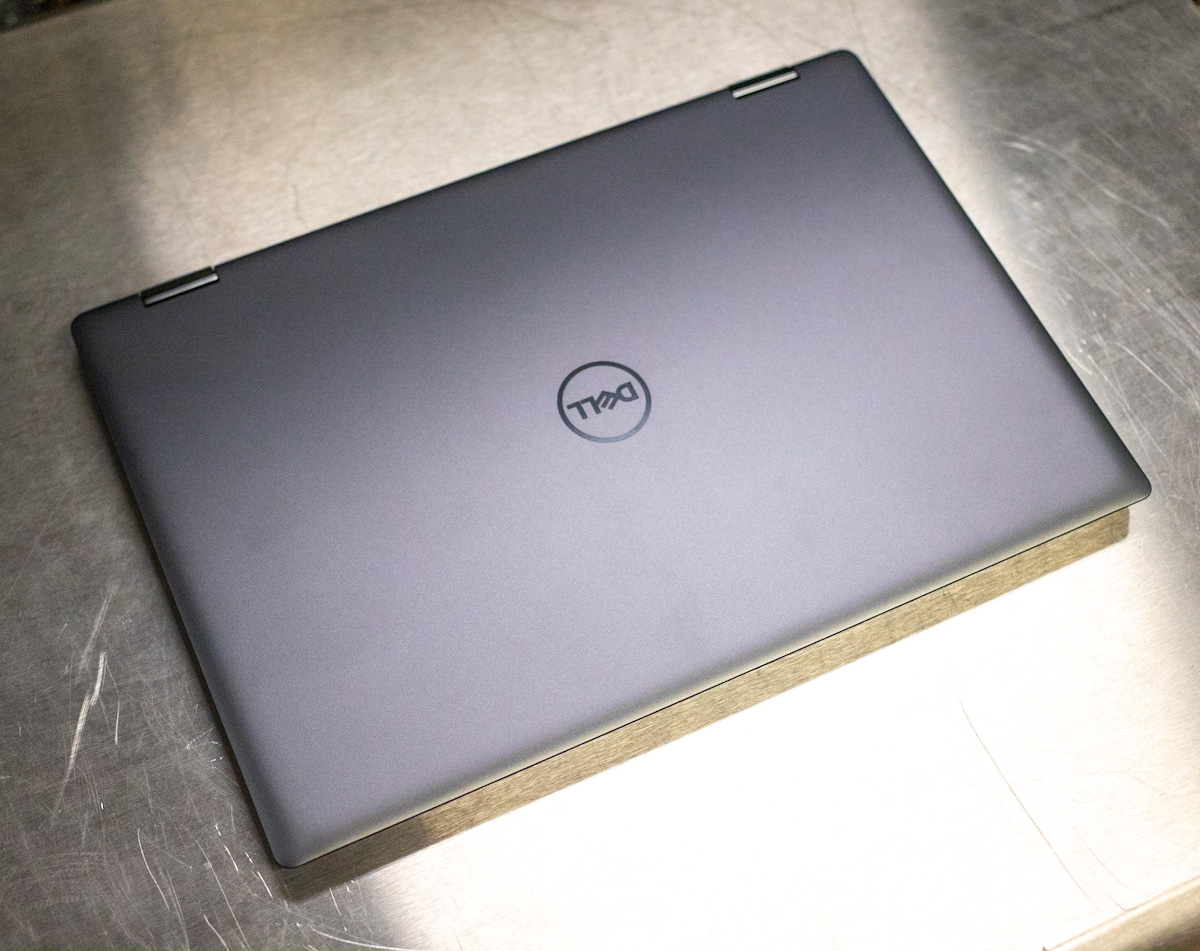 The 2-in-1 model measures 12.2 x 0.54 x 8.42 inches (WHD), a compact size considering its 14-inch screen. The laptop version starts at 2.8 pounds while the 2-in-1 model seen here starts at 3.2 pounds. Using this laptop as a tablet can feel heavy in your arms after a while. The hybrid versatility is nonetheless useful, especially on an airplane where you may not have enough room to use a traditional laptop. 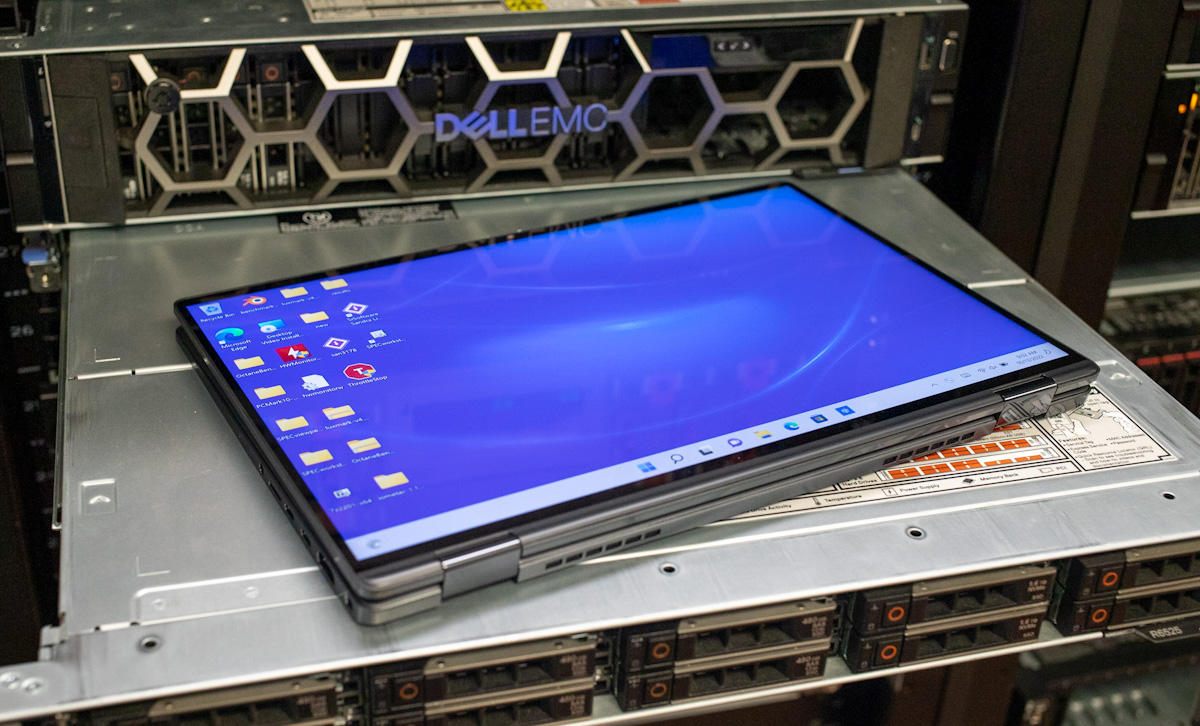 When it comes to input, the Latitude 9430’s keyboard has a satisfying tactile feel. The Function row defaults to secondary functions, such as volume and down, but enabling Function Lock makes the F1-F12 keys primary. The power button is on the far right of the Function row; it doubles as a biometric fingerprint reader. 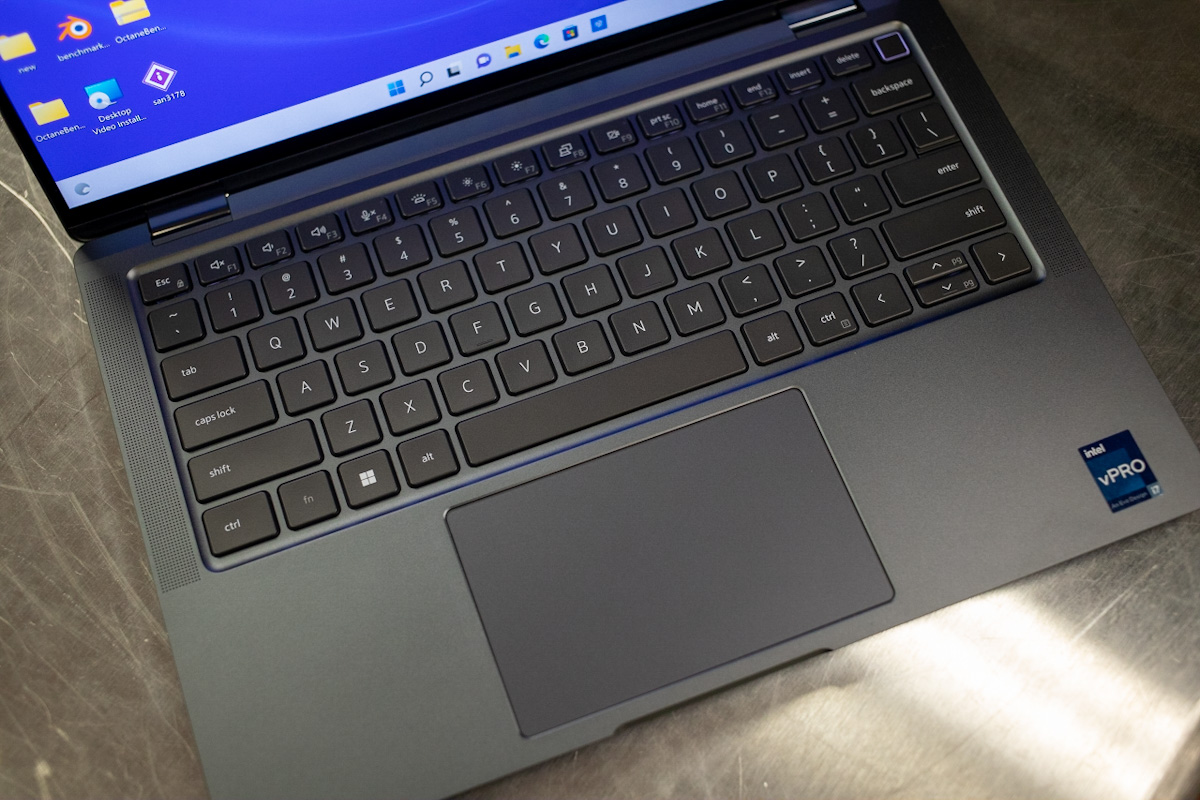 The Latitude 9430 also comes standard with an FHD webcam and four microphones instead of the usual two. An infrared sensor allows Windows Hello face logins. The F9 key electronically disables the webcam, which is better than a simple shutter. For quicker sign-ins, the Latitude 9430’s proximity sensor can wake the laptop before you sit in front of it.

Layout-wise, all I can complain about is the size-mismatched arrow key cluster; the left and right keys are full-size but the up and down keys are half-height. That isn’t intuitive. I’d like to see dedicated Page Up and Page Down keys, too.

Meanwhile, the amply-sized buttonless touchpad has a smooth surface and quickly responds to physical presses. The Latitude 9430’s top-firing speakers are on either side of the keyboard; there are two more under the chassis. Dell rates the speakers for a surprisingly potent 10 watts.

The Latitude 9430’s port selection works well for a laptop this thin. The left edge has a USB-A 3.2 Gen 1 port. 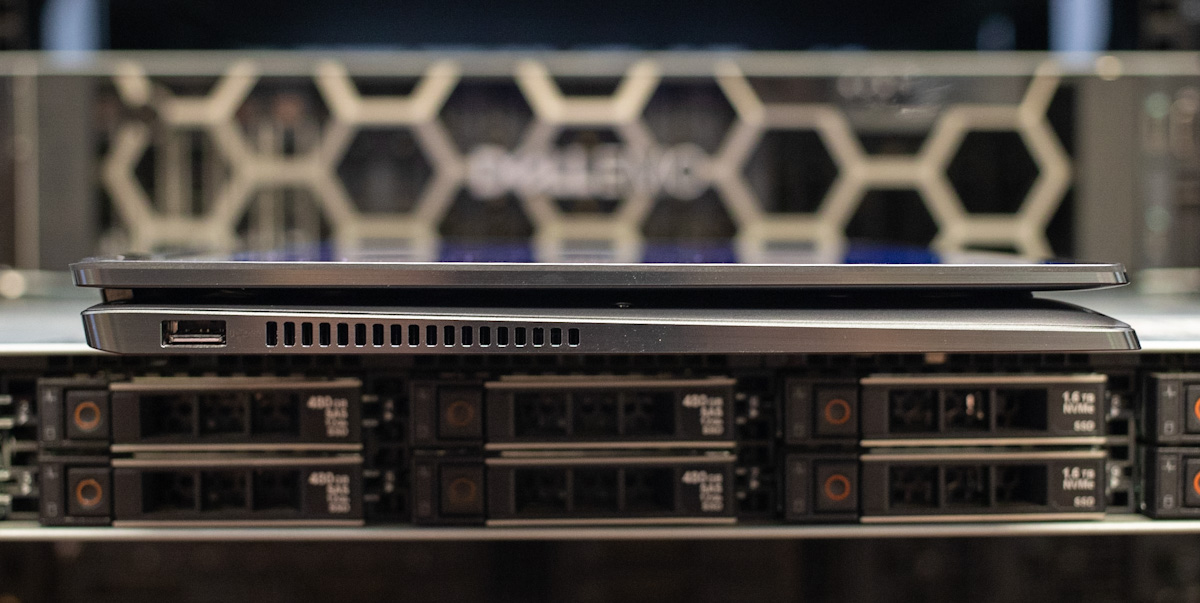 On the right, you’ll find a Wedge lock slot, HDMI 2.0, dual Thunderbolt 4 (USB-C) ports with Power Delivery and DisplayPort, a microSD reader, and a universal audio jack. If equipped with WWAN, the Latitude 9430 will also have a uSIM slot over here. 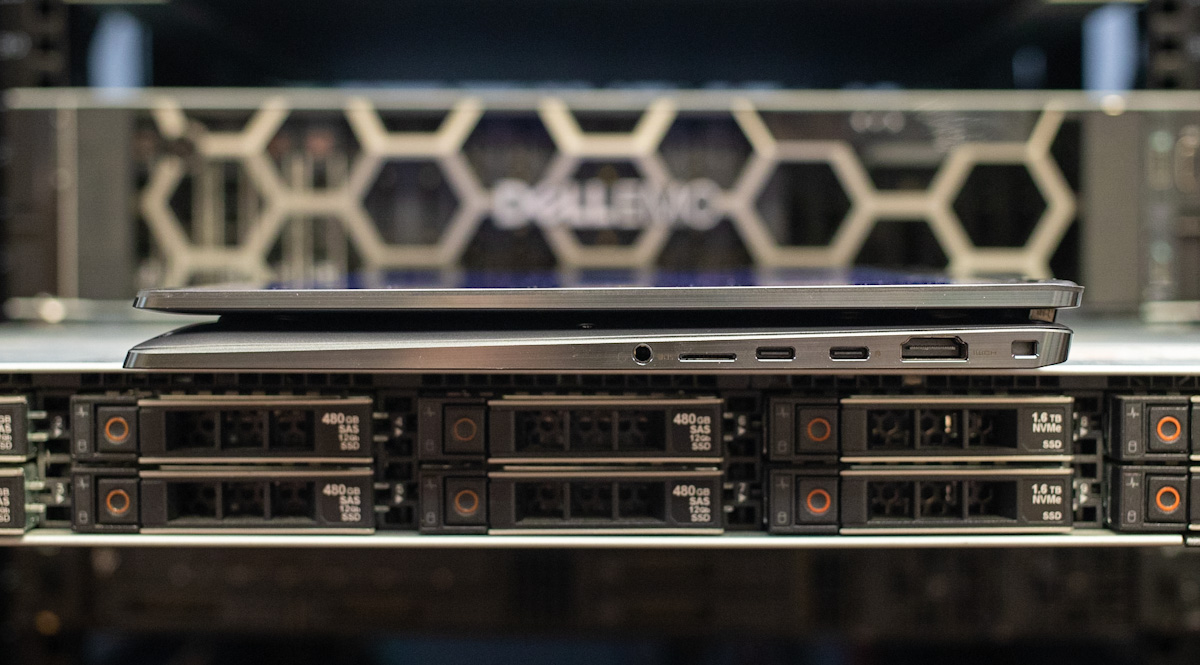 Standard wireless connectivity is Wi-Fi 6E and Bluetooth 5.2, courtesy of an Intel AX211 network card. Intriguingly, the Latitude 9430 supports simultaneous network connections via Dell’s ExpressConnect technology, allowing it to always be on the fastest network.

Changeable parts in the Latitude 9430 include its battery, wireless card, and M.2 2230 storage drive. The LPDDR5 memory is soldered-down and can’t be changed. 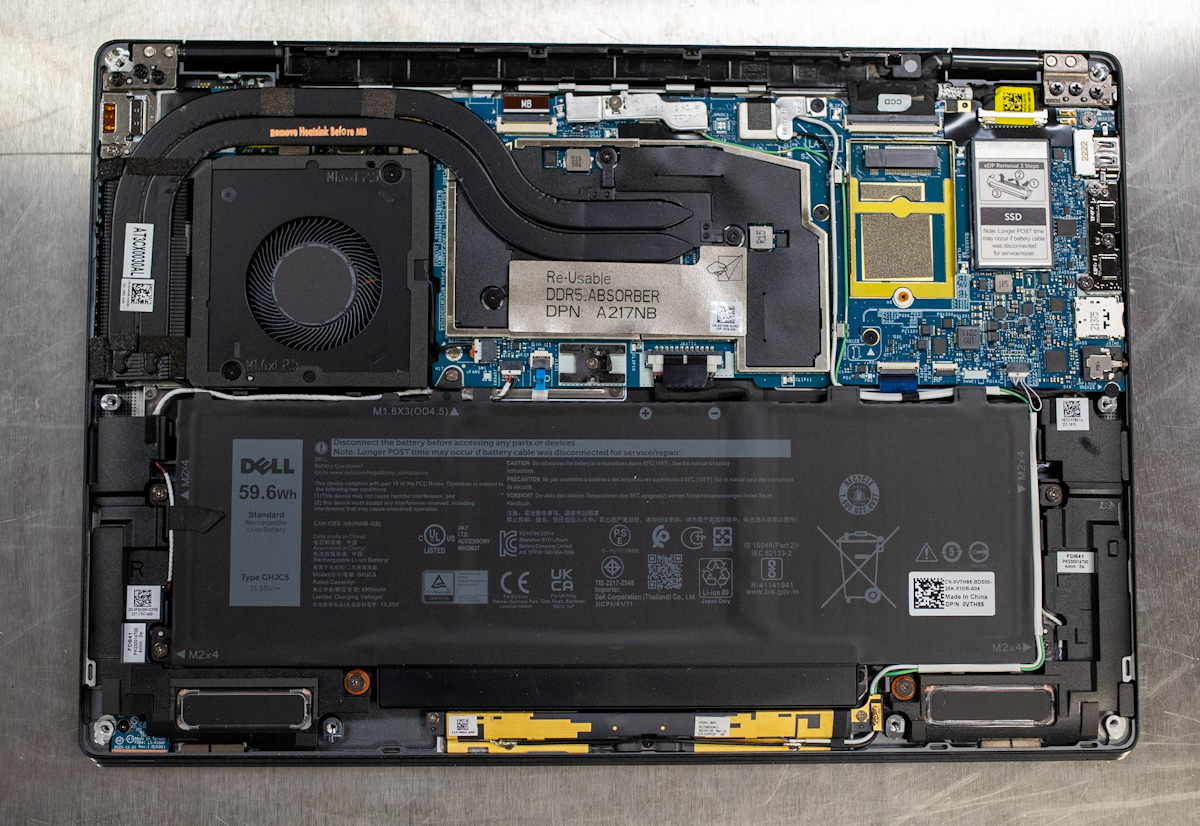 A new topic that we will be starting to cover on certain review systems is the area of accessibility. How easily these systems can be operated by individuals with disabilities is an important area we wanted to explore. All users don’t use systems in the same manner and we find it important to be inclusive in our review approach. To that end, we’ve been working closely with Amanda Lojeski who has been able to give us insight into these areas as she puts the systems into her daily use.

To start I’d like to give a bit of background about myself. I have a hard time using my hands and I struggle with many fine motor skills. As you can imagine, this does create some issues using computers and puts a strong focus on portability and ease of control. I rely on computers as well as internet access for my calendar, making appointments, classes, social gatherings, and research. I also love art, which has been generally limited to paper or an iPad, although I am starting to use computers more in this space as technology allows. I especially enjoy Zoom classes and chatting with my friends. It gives me great privilege to offer my view of accessibility in the review of the Dell Latitude 9430. 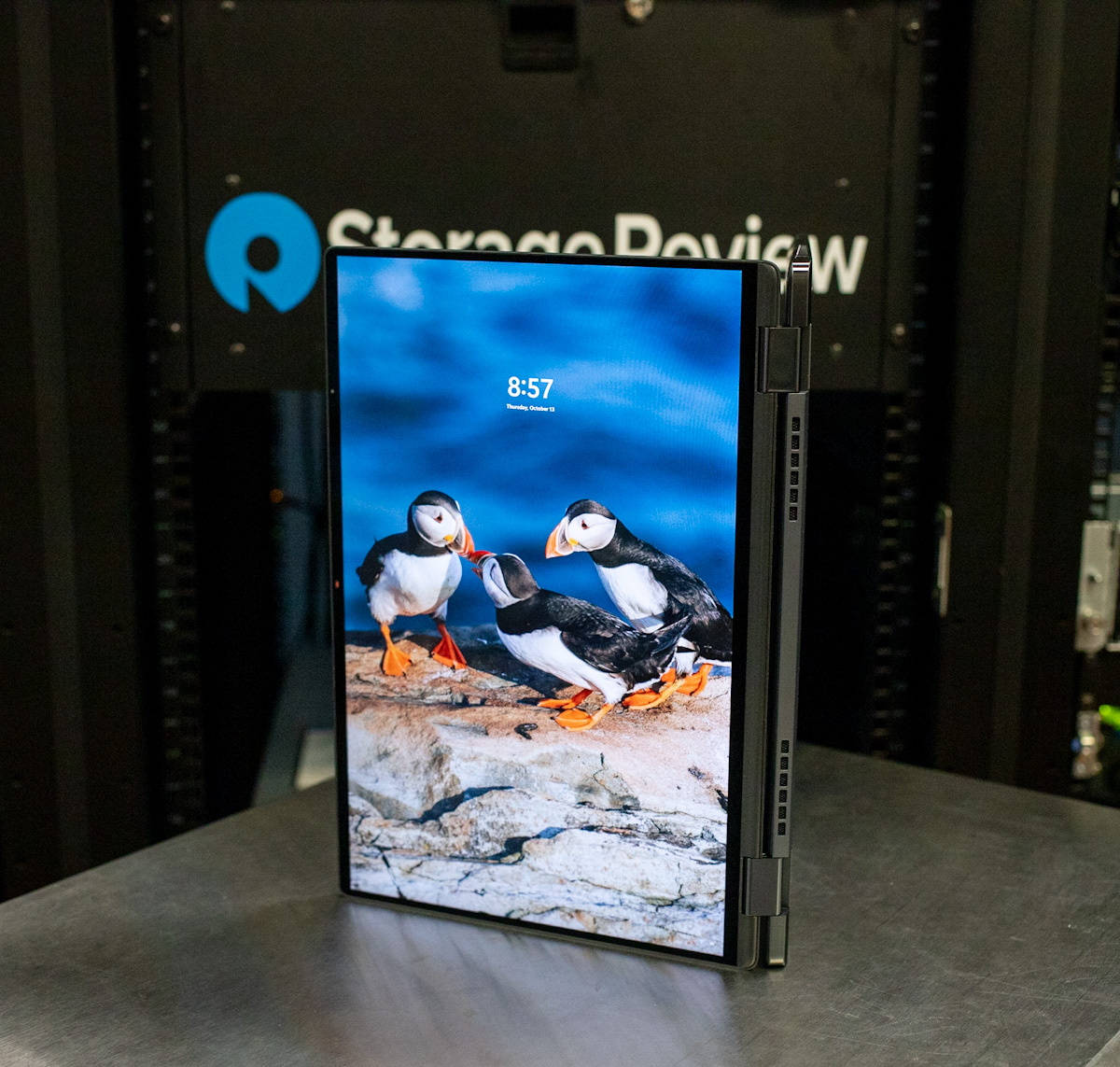 Opening the Dell Latitude 9430 was similar to other models I’ve used in the past. The top cover of the notebook is held shut firmly with tension and magnets. While it can be opened pretty well, it would be nice if a manufacturer would incorporate into the design a tab to assist one-handed individuals when opening the laptop. The display was bright and clear and I had no issues with reflections while using the notebook indoors or outside.

The standard keyboard worked well and wasn’t cramped on the smaller footprint of the Latitude 9430. The keys are short-throw and offer nice tactile feedback without requiring a lot of force to press each key. The only key on the keyboard that needs more pressure to activate is the power button, which helps to prevent accidentally triggering it. Dell also includes a large touchpad that worked very well in use, making up a large portion of the palm rest from the bottom edge to right below the first row of keys on the keyboard. The touchpad works very well during use, even with less precision toward motor control. The sensitivity worked well even with a lighter touch.

Being a 2-in-1 notebook, the Dell Latitude 9430 can operate as a touchscreen-capable notebook or as a slate-style tablet. The Latitude was wonderful to use when I had the system in tablet mode, which is a feature limited to a smaller segment of the notebook world. The touchscreen works well using both a finger input and stylus input. I really enjoyed using them both as a touchscreen is very desirable for individuals like me.

It’s important to note coming from macOS systems that on-screen finger input or stylus use is limited to iPads only. The stylus is awesome; once connected the stylus turns on with the computer and uses a battery that doesn’t need to be constantly charged (only replaced periodically). This stylus is easy to handle and features one button conveniently located on the top that sets it into drawing mode. It can also be used on other Dell touchscreen laptops.

In terms of the motions required to switch the Latitude between notebook and slate modes, I did notice it was difficult to flip because of the limited dexterity of my hands. This is a double edge sword since if the hinges aren’t firm, the screen would flop over in its notebook mode. One useful item that I found great from an accessibility standpoint is that the notebook came with a basic USB-C charger instead of a barrel-type charger. The USB-C plug is universal, meaning the notebook can be charged with other 3rd party chargers or cables, which can even be adaptable into power wheelchairs.

Wrapping up my accessibility review of the Dell Latitude 9430, it was a wonderful convertible notebook and addressed some accessibility needs. The notebook size in general worked well for me. The touchscreen and touchpad were very easy for me to operate using only my pointer finger or stylus. The stylus was very simple in design, and lacking a rechargeable battery proved to be a benefit. Even the display was brilliant, offering a strong backlight and limiting reflections in a wide range of use cases. I hope my review helps individuals with physical limitations understand some of the features of this convertible notebook.

The Dell Latitude 9430 2-in-1 we’re testing has the following specifications:

It might seem like a lot of money, but this is the single-unit consumer price off Dell’s site. Businesses buying for fleet use will get better pricing.

Though the Latitude 9430 wouldn’t be used for these types of tasks, it made it through the test. The ZBook occasionally did better, especially in GPU Compute because of its dedicated graphics, but the Latitude 9430’s newer Core i7 chip put it on top in FSI, Energy, and GeneralOps.

Another 3D benchmark we will be looking at is LuxMark, an OpenCL GPU benchmarking utility. The Latitude 9430 surprisingly kept up well here.

Next up is Blender, an open-source 3D modeling application. This benchmark was run using the Blender Benchmark utility. NVIDIA OptiX was the chosen render method. The score is in samples per minute, with higher being better. We only have results for the Latitude 9430. As with the other GPU-heavy tests, the Latitude 9430 isn’t well suited for this, but it did complete the test. 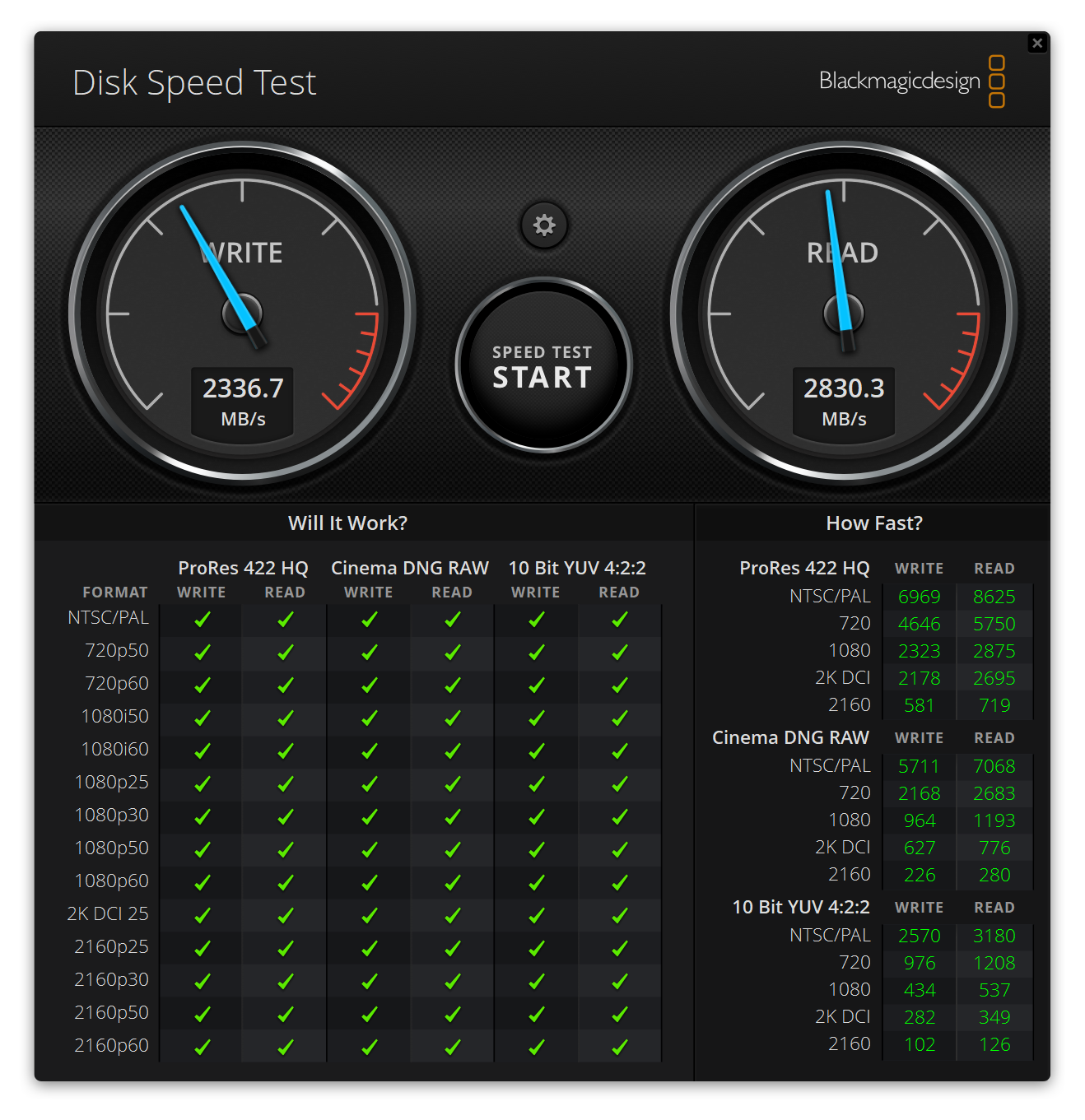 We have also started running 7-Zip’s built-in memory benchmark on laptops. The results below are only for the Latitude 9430.

We also run the popular SiSoftware Sandra 2021 suite. Higher numbers are better in all subtests. This is also a test we started using recently, so the numbers are only for the Latitude 9430.

Our last test is the new Blackmagic RAW Speed Test. The Latitude 9430 scored 32 frames per second (fps) in 8K CPU and 29 fps in 8K OpenCL. 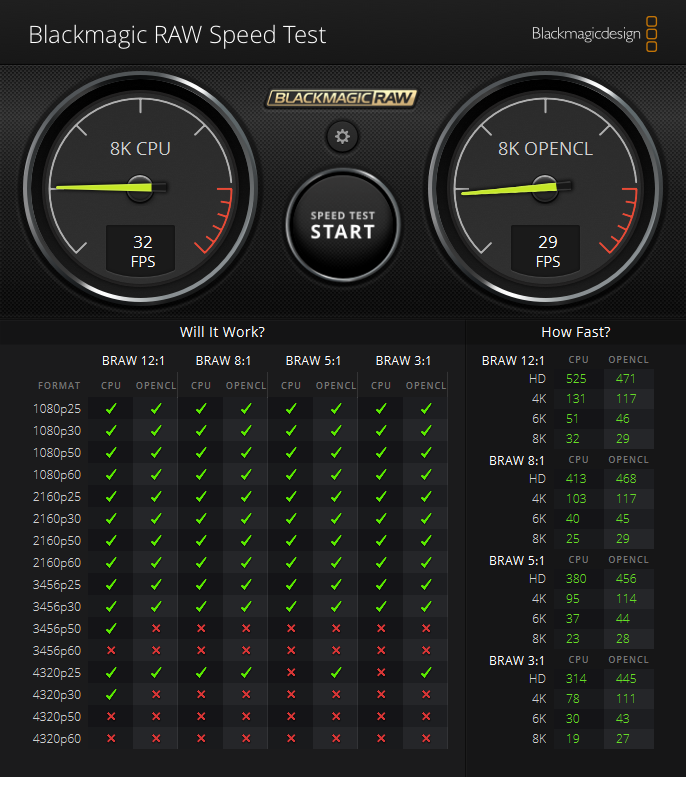 The Dell Latitude 9430 2-in-1 excels as a high-end, 2-in-1 convertible notebook. It’s a notebook-first device, but as Amanda found, the tablet functionality can make this hybrid an excellent option for those with certain disabilities.

This Latitude’s keyboard, touchpad, screen, and optional stylus are all first-rate, and its build quality is very strong. It also impresses with its privacy features, implementing technologies we haven’t seen before to minimize exposure in public places. Enterprises should also find it easy to manage, thanks to Intel vPro Enterprise support.

The Latitude 9430’s performance also earned it high marks. Its 12th generation Intel Core processor has ample power for day-to-day use and then some, even completing some of our workstation benchmarks. Storage could be better, as it only supports short M.2 2230 drives, but for the purposes this laptop is intended, it shouldn’t be a holdback. Overall, we send the Latitude 9430 2-in-1 off with our recommendation.