The HP ZBook Firefly G8 is the line’s most portable workstation with dedicated graphics to date. Available in both 14- and 15-inch versions, the new HP laptop is a highly customizable workstation that weighs in at just 2.98lbs and 3.74lbs, respectively, and features Wi-Fi 3, gigabit-class 5G, and long battery life.

The HP ZBook Firefly G8 is the line’s most portable to date. Available in both 14- and 15-inch versions, the new HP laptop is a highly customizable workstation that weighs in at just 2.98lbs and 3.74lbs, respectively, and features Wi-Fi 3, gigabit-class 5G, and long battery life.

The ZBook is a versatile line comprised of workstations that fit a range of both professional and casual needs. The Firefly G8 is from the newest generation and fits somewhere near the lower end of the spectrum as far as performance goes. As such, it can be outfitted with up to NVIDIA T500 graphics (a GPU designed for professional apps), 11th gen Intel processors, up to 2TB of speedy NVMe storage, and an improved HP DreamColor display that is highlighted deeper blacks, brighter whites, and full-spectrum color precision. There are also two GPU options: The Intel Iris Xᵉ GPU (275W8AV) and the NVIDIA T500. The T500 is available to the marketing in both 2GB and 4GB models. HP used the 4GB T500 in this build. The former graphics option is an onboard GPU that is designed specifically for Intel’s 11th generation laptop chips. Intel indicates that it is meant for gaming, and though it will certainly be very limited in what it can produce in more demanding titles (like all onboard options), it will definitely suit light gaming needs. The NVIDIA T500 is the discrete graphics card option and brings more flexibility to the ZBook Firefly G8. Ultimately, this is the GPU you will want to go with if plan on running any kind of professional software package. 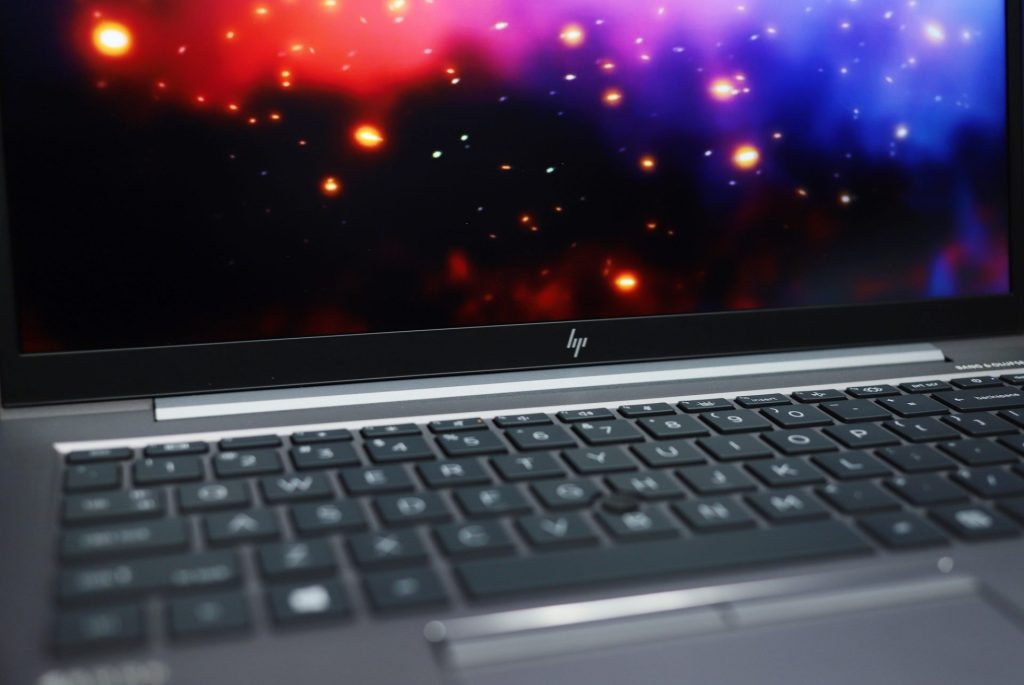 If you don’t have a wireless access point available or don’t want to risk connecting to an unsecured wireless network, the optional 4G LTE or 5G can use the SIM card from your mobile provider, so you can access the Internet anywhere your phone can. This type of connectivity is becoming more common as mobile networks are becoming more reliable and is certainly a very useful feature for workers who find themselves constantly on the go.

The display features a billion on-screen colors and 100% DCI-P3 coverage with DreamColor. Developed in partnership with DreamWorks Studio, this technology is an important feature for design professionals who need a mobile workstation (or with any display in general), as it is meant specifically for use cases that require color-critical work due to its superior color accuracy and predictability. This is the first time a DreamColor panel has been offered in a 14-inch display-size model. Coupling a great display with a super-portable is something that isn’t very common on the mobile workstation market. 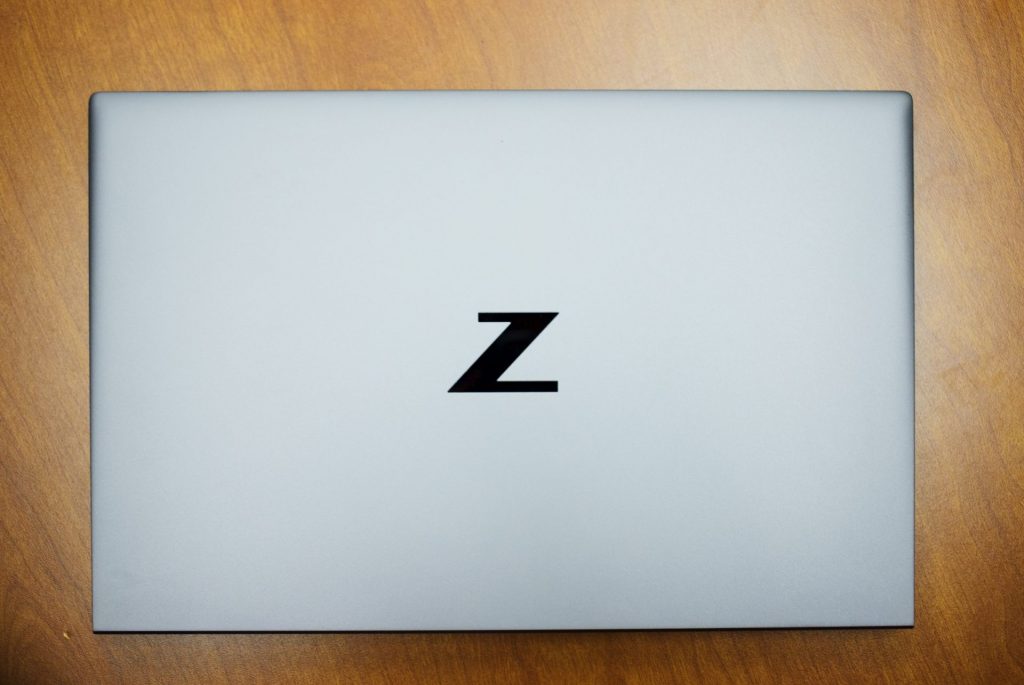 Other options include an FHD LED UWVA Anti-Glare display with 100 nits (the unit used to determine luminance) for the standard model, which can be upgraded to an HP Sure View Reflect Integrated Privacy Screen and Ambient Light Sensor with an impressive 1000 nits.

As we indicated earlier, the Firefly G8 is one of HP’s most portable mobile workstations to date, weighing in at just under 3 pounds for the 14-inch model. The design is very slick and has a premium-like feel to it. The Firefly G8 also uses recycled ocean-bound plastics, features plastic-free packaging, reduces the amount of hazardous material, and has fantastic power consumption. So, if you are someone who constantly looks for environmentally-friendly products, HP has certainly put some effort into making it appealing. 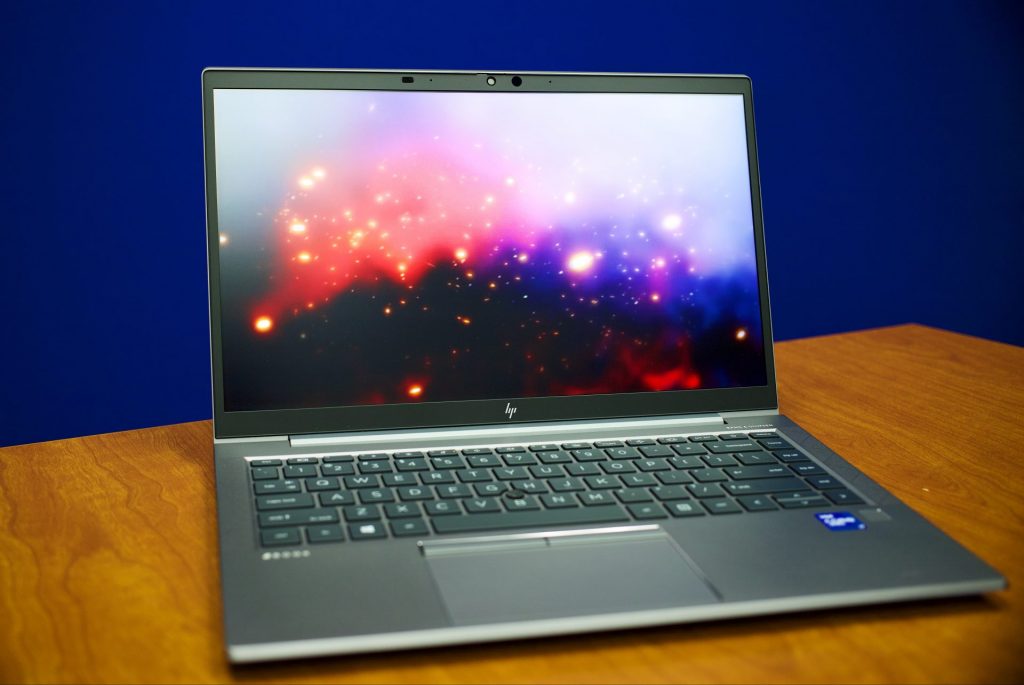 The Firefly G8 is also extremely flexible when it comes to viewing: it can open up to 170 degrees (the hinges can almost lay completely flat), making it easy when you need to collaborate and show off your screen at different angles. The keyboard has features new rubber domes, a dual-point stick, a power button, and a near-silent click pad, all of which help make working a more comfortable and quiet experience. 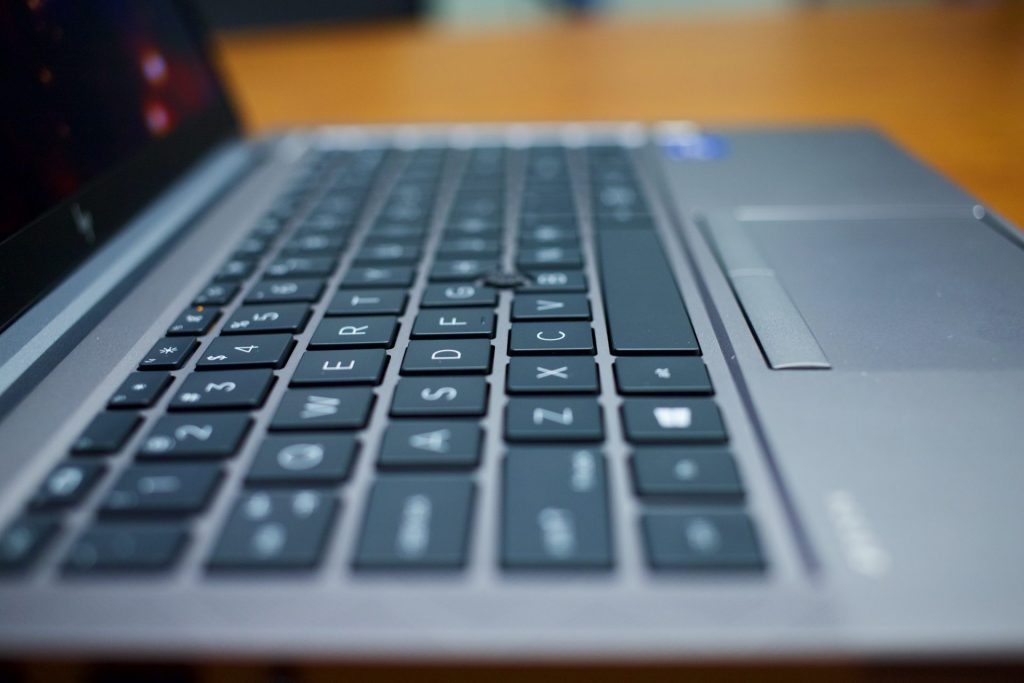 Along the top of the Firefly G8 is the webcam (HD camera or UR camera depending on the model) and HP privacy camera shutter. The fingerprint sensor is located at the bottom right, just below the keyboard.

On the right side of the mobile workstation are the two USB Type-C (Thunderbolt 4) ports, HDMI 2.0 port, a Nano SIM card slot, and a 4.5mm AC power connector. 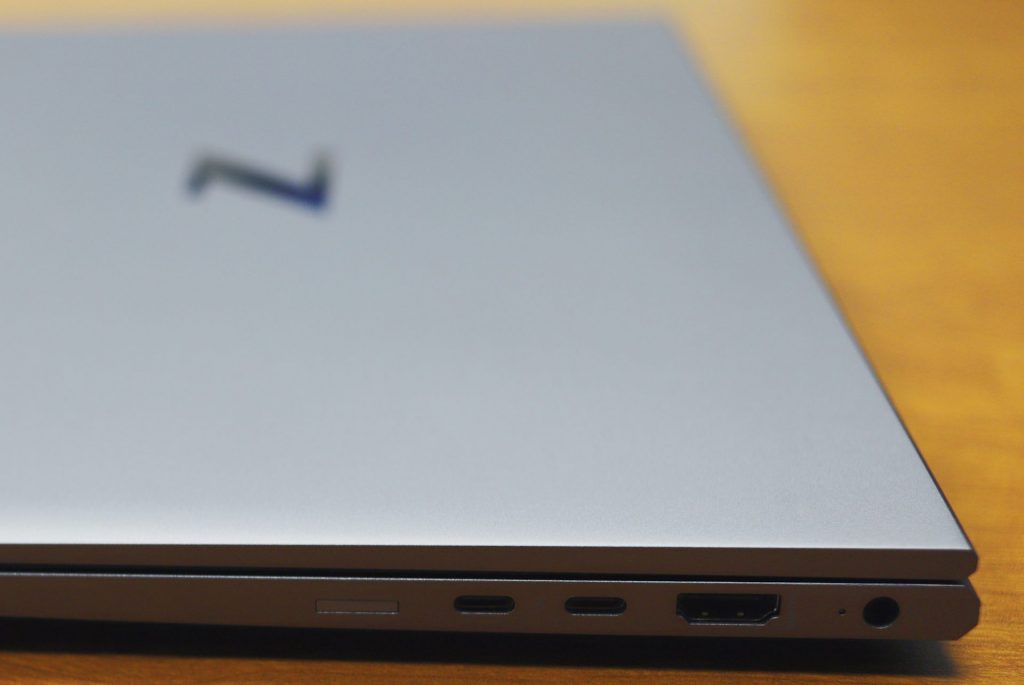 Turning the Firefly G8 around to the left side reveals the nano security lock slot, two USB 3.1 Gen 1 Type-A ports (one of which is for charging), the headphone/microphone combo jack, and an optional HP Smart Card Reader. The fan venting is located underneath the mobile workstation. We outfitted the Firefly G8 with an NVIDIA T500, the company’s newest lower mid-range PCIe 4.0 professional graphics card based on the Turing architecture. It features 896 NVIDIA CUDA cores, 2GB or 4GB of GPU memory (depending on the model you choose), and 80GB/s in memory bandwidth.

To gauge the performance of the Firefly G8, we put it through a series of resource-intensive tests using the following build:

Here, the ZBook Firefly G8 showed solid results for its class with an overall score of 5,343, comprising 9,010 in essentials, 8,414 in productivity, and 5,460 in digital content. The latter score was brought down by the video editing/rendering section due to the FPS limitations of the 4TB NVIDIA GPU

Here, the new ZBook showed some pretty solid numbers for its class and size. The only area where it posted weaker results was in Siemens NX (advanced high-end CAD software).

Looking at the Montreal model, the HP ZBook Firefly G8 Gen 3 posted an average and minimum FPS recorded 187.86 and 70.76, respectively.

Our last model is of Portland. Here, the new ZBook had an average FPS that showed 647.70 while the minimum FPS posted 460.41. 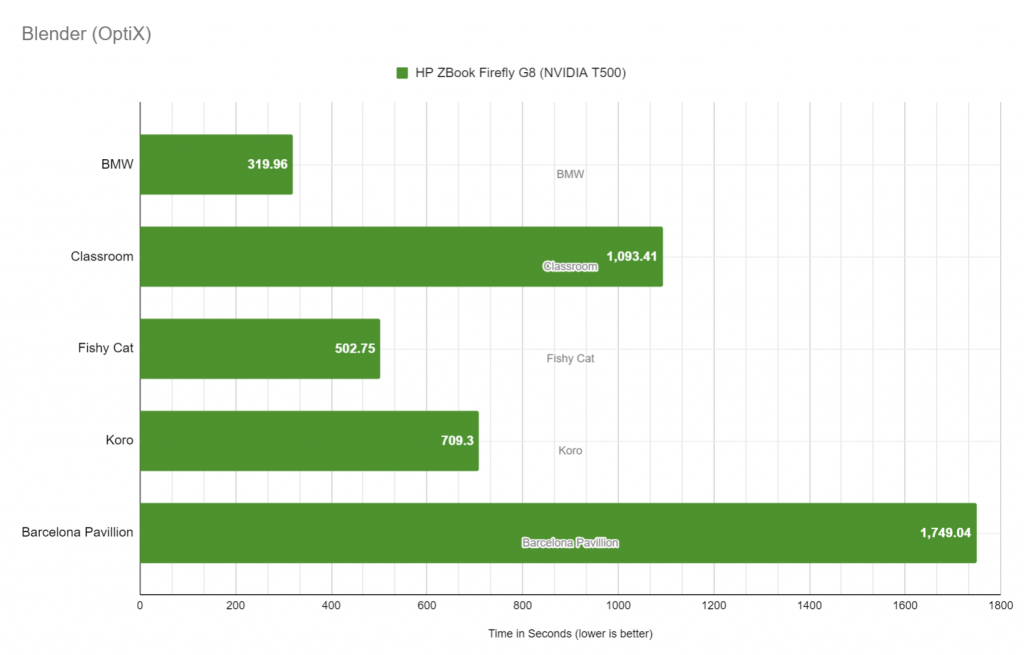 This benchmark was extremely slow to run, though this was certainly expected from a lower-end workstation outfitted with an entry-level professional graphics card (Iris Xᵉ). 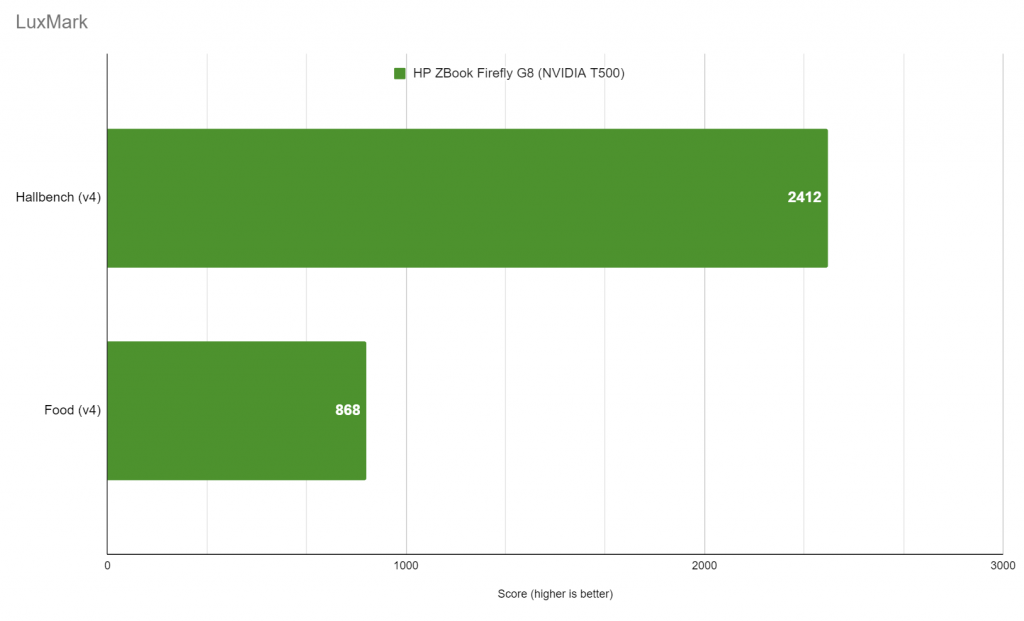 In the food rendering category, the Firefly G8 scored 868 when equipped with the NVIDIA T500, while the Hallbench rendering category showed 2,412. Again, these were very slow results, and those opting for the onboard GPU option will likely not be able to run the Blender or LuxMark.

HP’s ZBook Firefly G8 is a great-looking, ultra-portable mobile workstation that offers just enough power to suit the needs of lighter professional use cases and even some casual gaming. Though it’s considered a lower-end model in the ZBook line, it still offers a range of configuration options.

Users can outfit the new ZBook with an Intel Core i5-1135G7 (up to 4.2 GHz) or the higher-end i7-1185G7 vPro (up to 4.4 GHz with Turbo Boost), with two other options in the middle. Memory configurations include up to 64GB of DDR4 3200 RAM, while internal storage ranges from a 128GB PCIe TLC SSD up to a 2TB PCIe NVMe TLC SSD. Users also have two GPU choices: The onboard Intel Iris Xᵉ (275W8AV) and the NVIDIA T500 discrete graphics card with 4GB of memory. 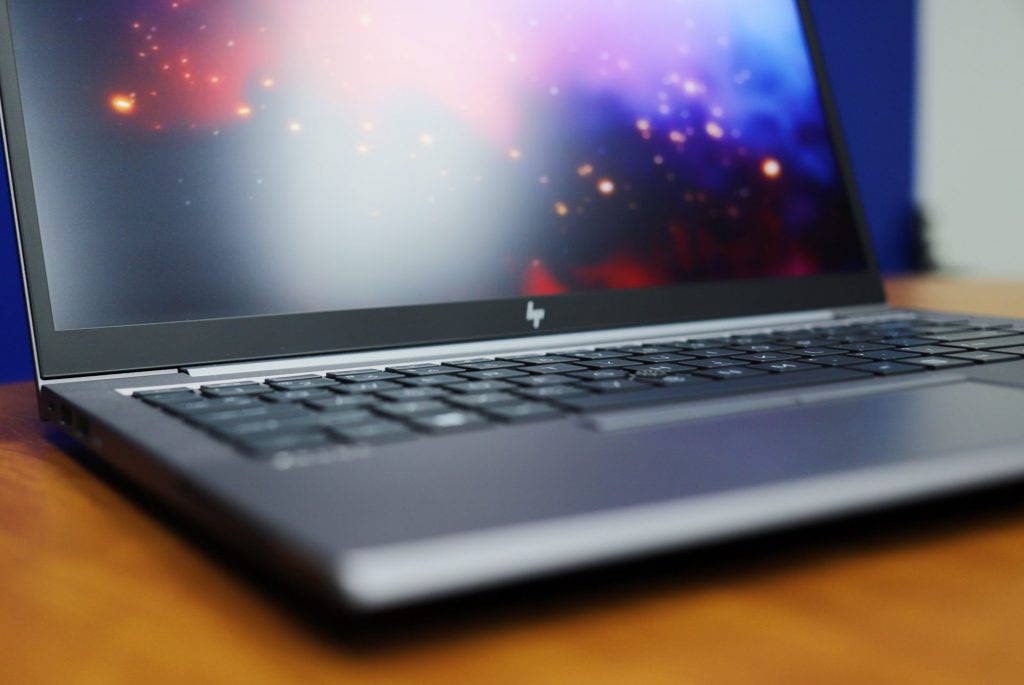 What sets the ZBook Firefly G8 apart from others is the HP DreamColor panel, as it is the first 14-inch mobile workstation to feature this technology. One of the biggest problems that HP DreamColor solves for content creators is colors appearing differently on different displays as well as rendering differently on different output devices. This technology allows devices to produce high color accuracy and predictability, making the Firefly G8 a unique combination of display quality and small form-factor. 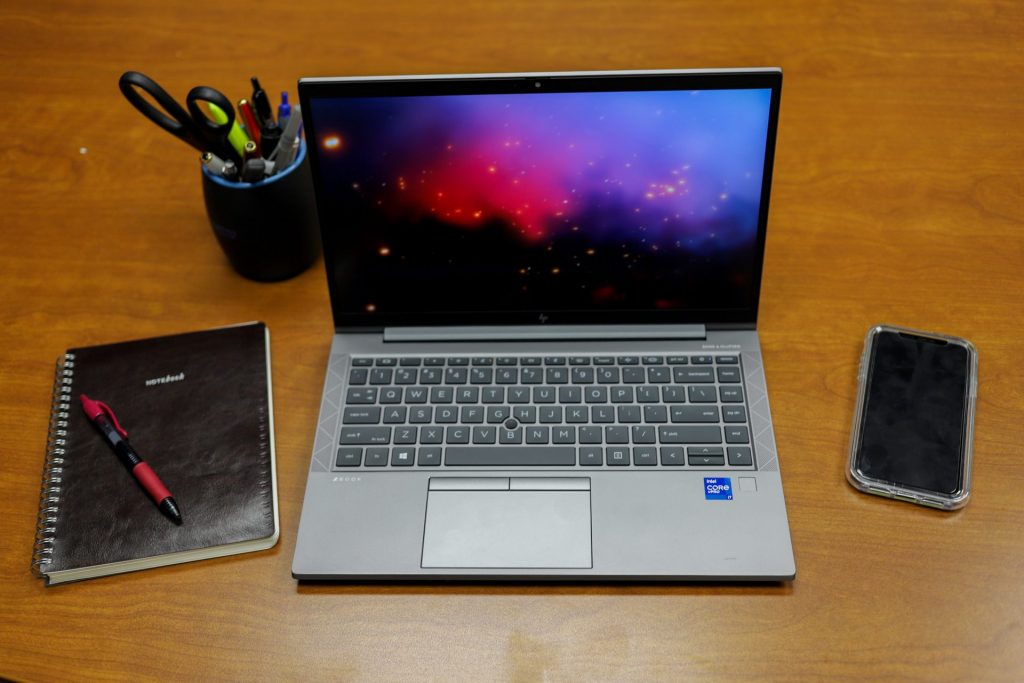 All of this makes the Firefly G8 is an interesting option for both professionals and consumers alike. Though the new HP workstation is behind the more performance-driven models from the ZBook line, it features a great display, a range of component configurations, and one of the most portable builds we’ve seen in the workstation market. The Firefly G8 certainly checks some of the more important boxes, though the dedicated graphics card option is a must-have for anyone looking to run professional software packages.

Those who need a workstation that can handle resource-intensive applications will definitely want to look for a higher-end model with a more powerful GPU – there are plenty of options in the ZBook family. But for its part, the HP ZBook Firefly G8 is a really good option for professionals looking to get into a highly mobile workstation that carries a wonderful display.