Today Dell announced the specifications and availability information for its new 13th Generation PowerEdge R730 and R730xd servers which feature the new Intel Haswell Xeon E5-2600 v3 processor family (which was also announced today). The R730xd is a 2U storage server solution built on Intel’s Grantly platform, which consists of Intel Xeon Haswell processors and a Wellsburg C610 chipset with DDR4 memory. These processors incorporate embedded PCIe lanes for improved I/O performance. Certain E5-2600 series processors can also perform DDR4 operations at a data rate of 2,133MT/s, and the R730xd supports three DIMMs per channel at 1,866MT/s with these processors. The R730xd also boasts impressive storage-centric configurations; our review model has a unique combination of 1.8″ SSD bays, 3.5″ hard drive bays and 2.5″ flexible drive bays in the rear of the chassis.

Today Dell announced the specifications and availability information for its new 13th Generation PowerEdge R730 and R730xd servers which feature the new Intel Haswell Xeon E5-2600 v3 processor family (which was also announced today). The R730xd is a 2U storage server solution built on Intel’s Grantly platform, which consists of Intel Xeon Haswell processors and a Wellsburg C610 chipset with DDR4 memory. These processors incorporate embedded PCIe lanes for improved I/O performance. Certain E5-2600 series processors can also perform DDR4 operations at a data rate of 2,133MT/s, and the R730xd supports three DIMMs per channel at 1,866MT/s with these processors. The R730xd also boasts impressive storage-centric configurations; our review model has a unique combination of 1.8″ SSD bays, 3.5″ hard drive bays and 2.5″ flexible drive bays in the rear of the chassis.

The PowerEdge R730xd is available in three chassis configurations with varying sizes and combinations of storage drives along with an optional rear expansion unit:

Dell provided us with the hybrid chassis which combines 18 front-accessible 1.8-inch SATA SSDs and 8 3.5-inch drives (SAS, SATA, or nearline SAS). Two additional 2.5-inch drive bays are accessible from the back of the server. For this review, we have access to 5 certified 3.5-inch HDDs and 5 1.8-inch SSDs. Dell’s new PERC9 storage controllers have moved away from the LSI CacheCade technology used by 12th generation PowerEdge servers to a solution that leverages SanDisk’s FlashSoft caching to accelerate configurations that mix SSD and HDD drives.

The Dell PowerEdge R730xd is shipping now with a starting price of $2,579.

Our PowerEdge R730xd review unit utilizes Dell’s new hybrid chassis with 16 front-accessible 1.8-inch SATA SSD bays and 8 front-accessible 3.5-inch bays with SAS, SATA, and nearline SAS connectivity options. For this review we were offered 5 3.5-inch HDDs and 5 1.8-inch SSDs. The R730xd uses a panel with six status indictors at the top-left that can be used to begin troubleshooting system errors. A system identification button causes the button itself and the system status indicator on the back of the unit to flash blue until a system ID button is pushed again. The front USB port is USB 2.0 while the rear are USB 3.0.

The R730xd supports up to two Intel Xeon E5-2600 v3 processors with up to eighteen execution cores per processor and it can utilize up to 24 DDR4 DIMMS with up to 768GB of memory. DIMM slots are located directly on the motherboard. The PowerEdge R730xd supports registered DIMMS and load reduced LRDIMMs (LRDIMMs), which use a buffer to reduce memory loading and provide greater density. Certified 64GB DIMMs are expected to be available in the near future, allowing a maximum memory capacity of 1.5TB. 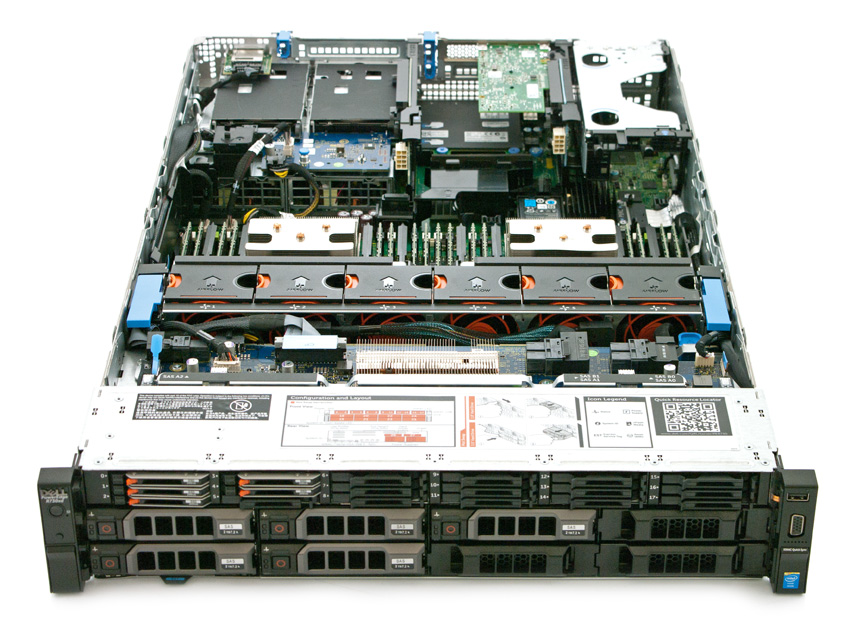 The back of the server provides access to three low-profile PCIe 3.0 expansion slots on the left as well as two full-height PCIe slots at the center and a third full-height PCIe slot to their right. This server features dual 750W power supplies at bottom right and a vFlash media card slot at top-right. Two additional 2.5-inch drive bays are accessible from the back of the server via an optional flex bay that can provide SAS, SATA, or nearline SAS connectivity.

PowerEdge R730xd servers implement the Dell OpenManage platform, powered by the Integrated Dell Remote Access Controller 8 (iDRAC8) with Lifecycle Controller. For agent-based management deployments, Dell’s OpenManage Server Administration (OMSA) offers one-to-one system management from the command line or a Web GUI. iDRAC can provide remote access to the system whether or not there is an operating system installed. After login, iDRAC displays a system overview as well as a virtual console preview via its iKVM. 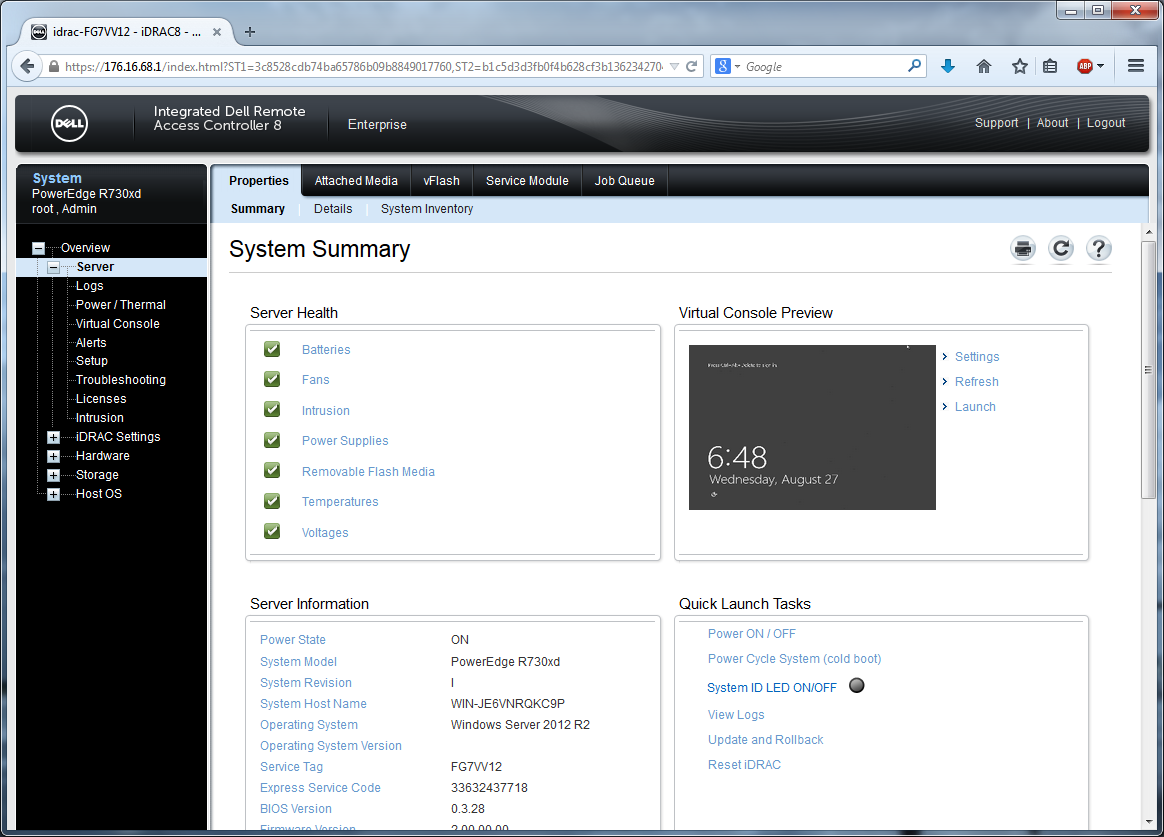 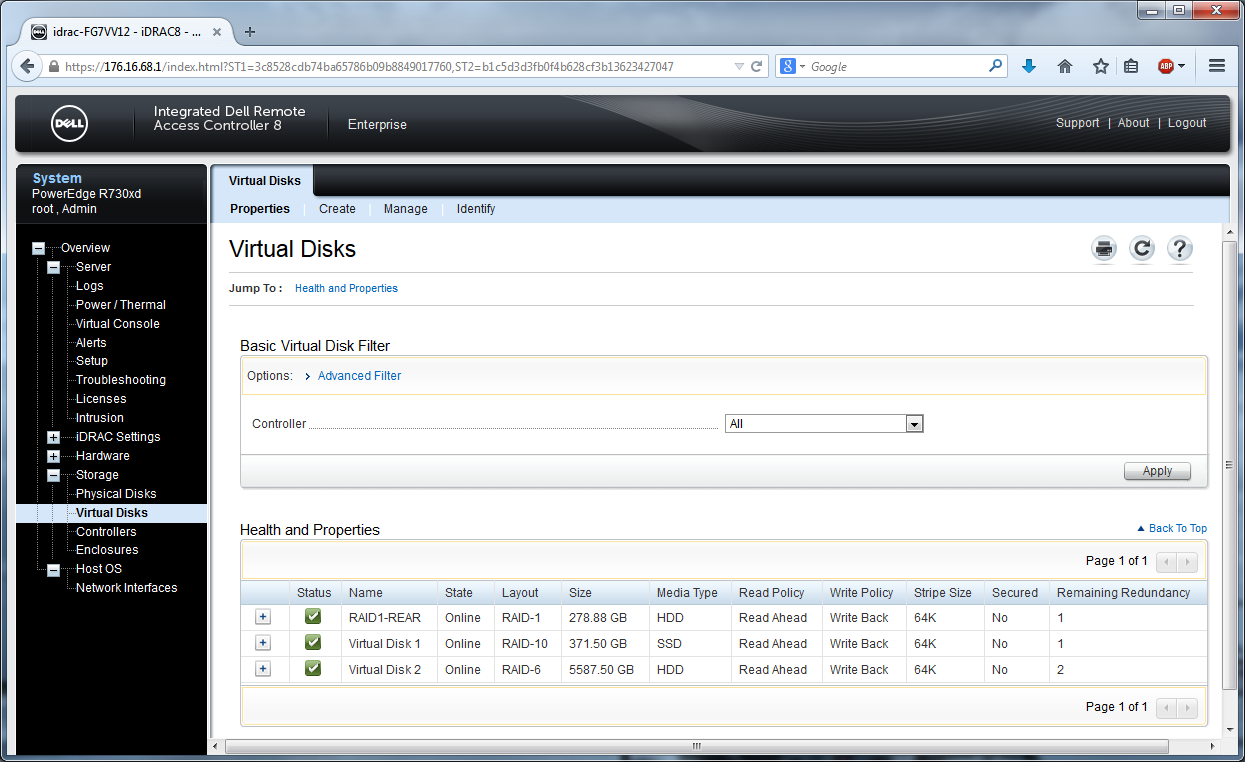 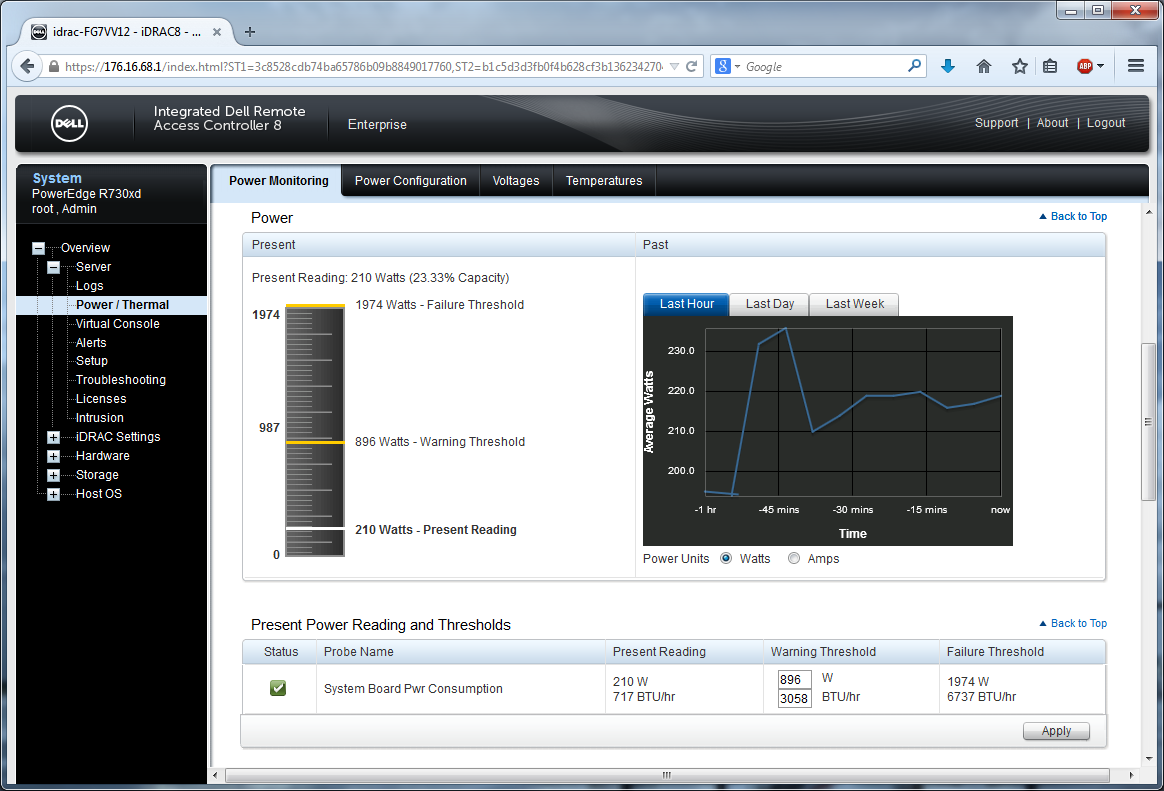 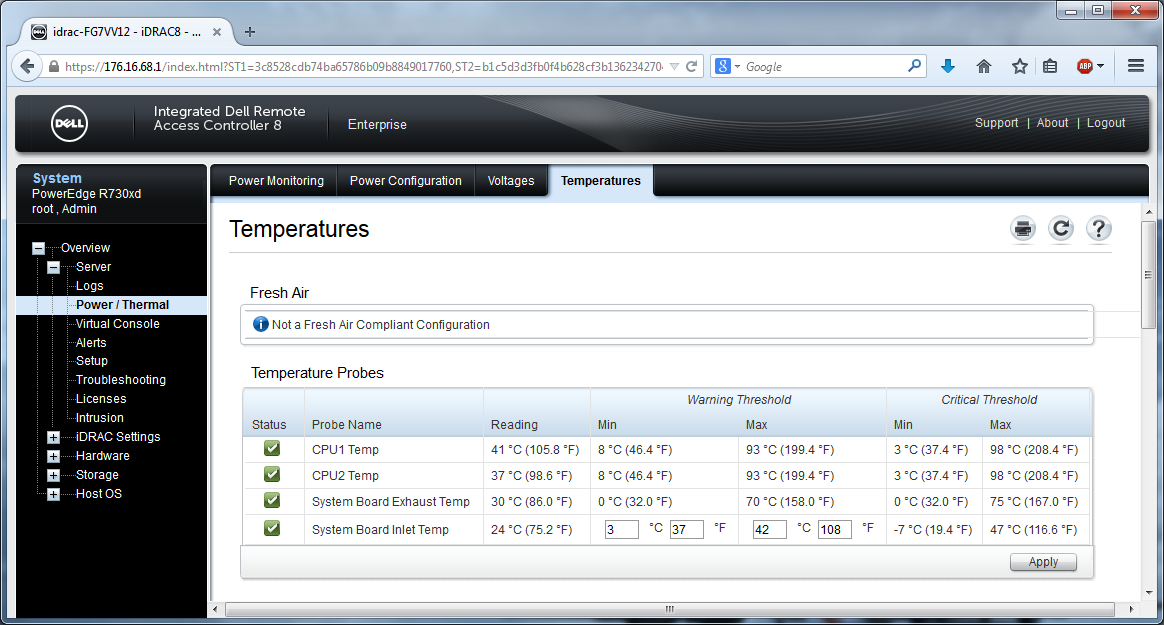 Dell’s 13th Generation PowerEdge Servers utilize the company’s new PERC9 controllers, which have replaced the LSI CacheCade technology of the PERC8 controllers with the DAS Cache solution from SanDisk. DAS Cache uses “filter driver” for the operating system in order to accelerate performance by caching frequently used data on SSDs. 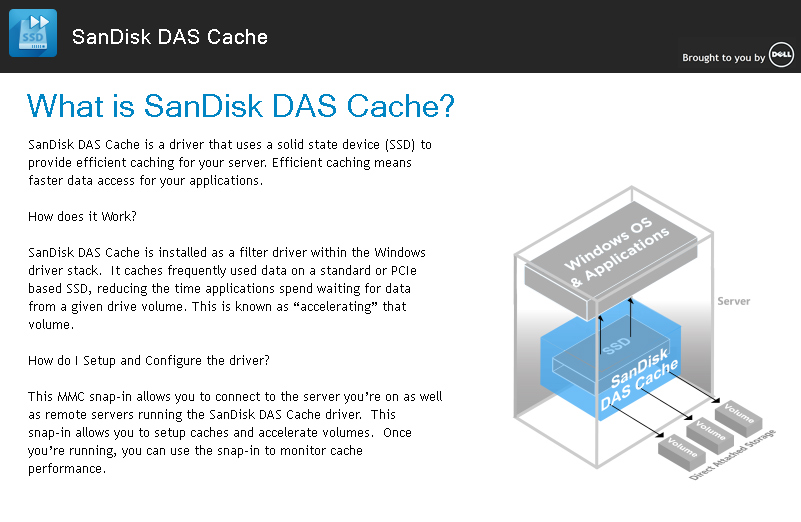 SanDisk DAS Cache can be applied to up to four caches per server and requires that the target SSD already be configured with a storage volume. For our benchmarks of the R730xd, we will incorporate a configuration that utilizes a DAS Cache in write-back mode to accelerate a RAID6 volume composed of HDDs by adding RAID10 SSD cache. 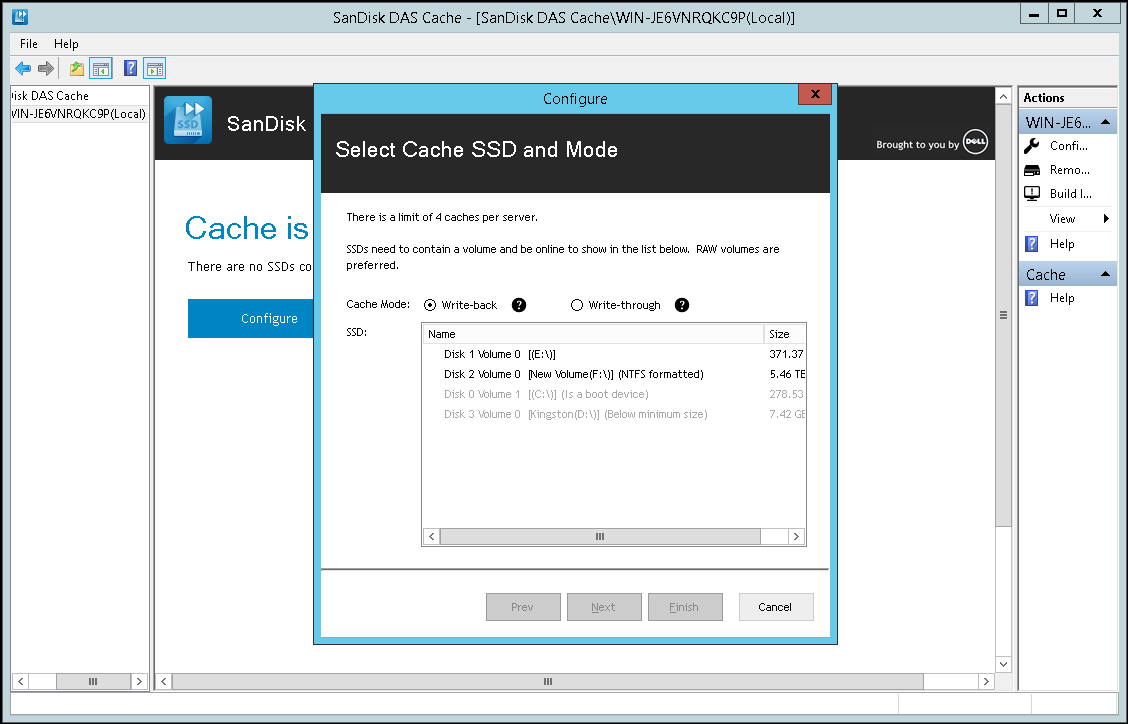 The SanDisk DAS Cache software offers a straightforward monitoring interface with an overview of cache status and performance. 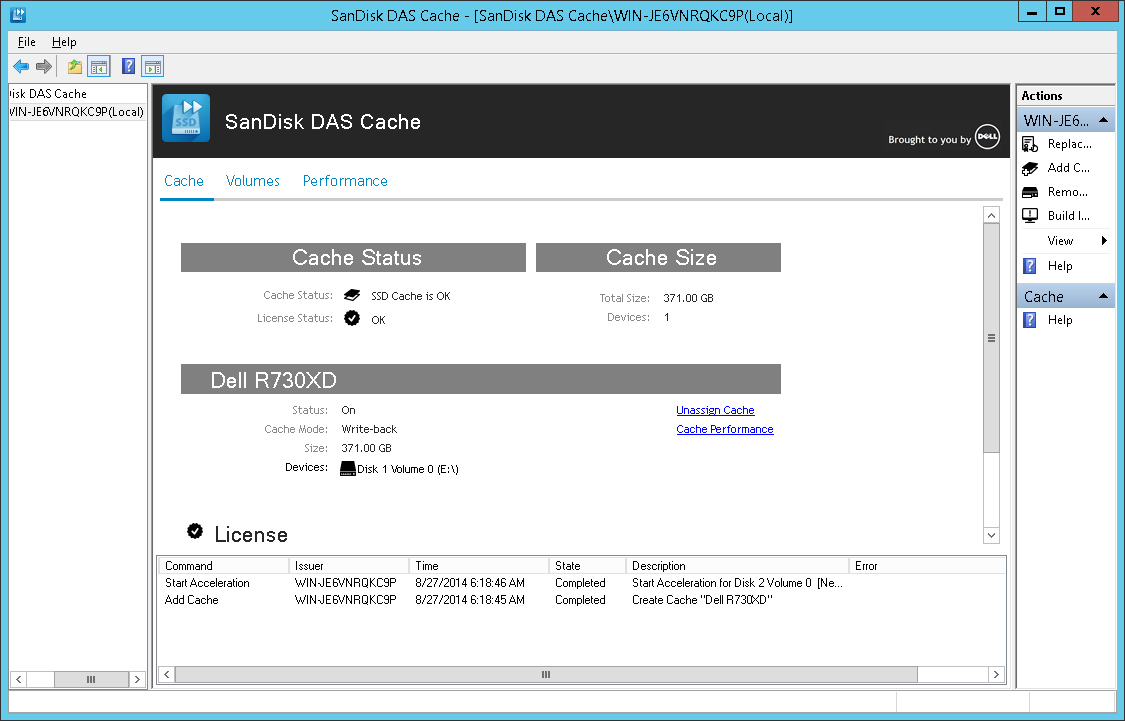 Because the PowerEdge R730xd has just become available, our goal for this review is to provide a baseline of synthetic enterprise results to help potential customers evaluate its performance. Our benchmarking protocol for the R730xd therefore will not compare its performance to other servers at this time. Depending on the specific workload, we will compare the results of up to three different storage schemes for the R730xd:

Among the three R730xd configurations evaluated during the 4k benchmark, the RAID10 SSD volume achieved the greatest throughput at 103,099IOPS for read operations and 25,979IOPS for write operations, although the DAS Cache configuration performed almost as well.

The hybrid DAS Cache configuration also kept pace with the all-flash RAID10 volume in terms of average latency during the 4k benchmark.

The R730xd in the DAS Cache configuration experienced only a slightly wider range of latency spikes than the RAID10 volume. For comparison, HDD-only RAID6 latencies spiked above one second for 4k read operations and topped two seconds for write operations.

After reconditioning the server for sequential 8k transfers, we measured the PowerEdge R730xd’s throughput with a load of 16 threads and a queue depth of 16 for 100% read and 100% write operations using only the all-flash and all-HDD configurations. The RAID10 SSD volume achieved higher read throughput at 102,673IOPS, while the RAID6 HDD volume performed better for write operations at 102,426IOPS.

The next results are derived from a protocol composed of random 70% read operations and 30% write operations with an 8k workload across a range of thread and queue counts. In terms of throughput, the RAID10 SSD volume took top position with the SanDisk DAS Cache configuration falling only slightly behind. 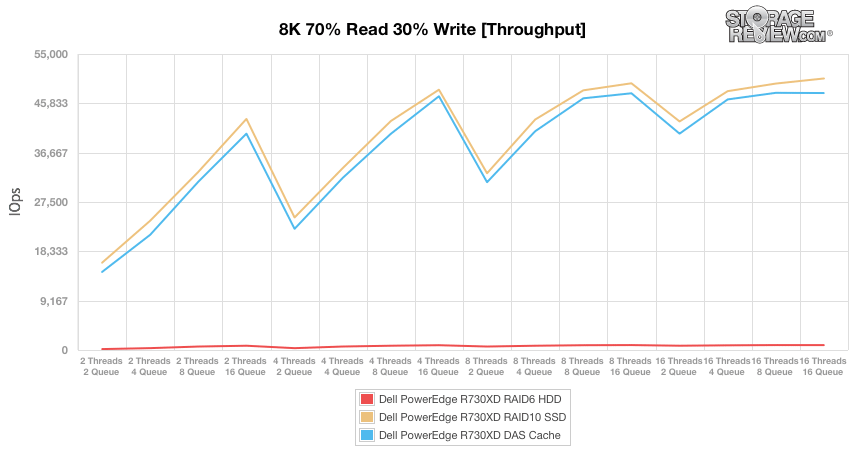 Under the heaviest workloads the RAID10 configuration reached 5.06ms of average latency with the DAS Cache configuration at 5.35ms. 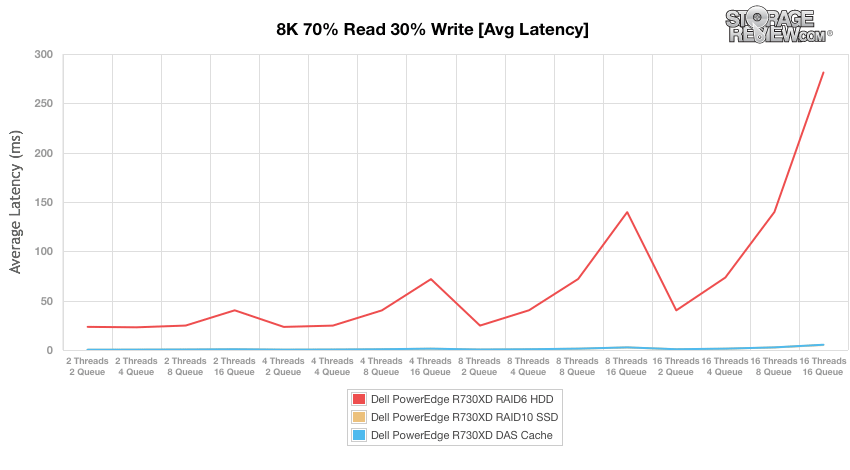 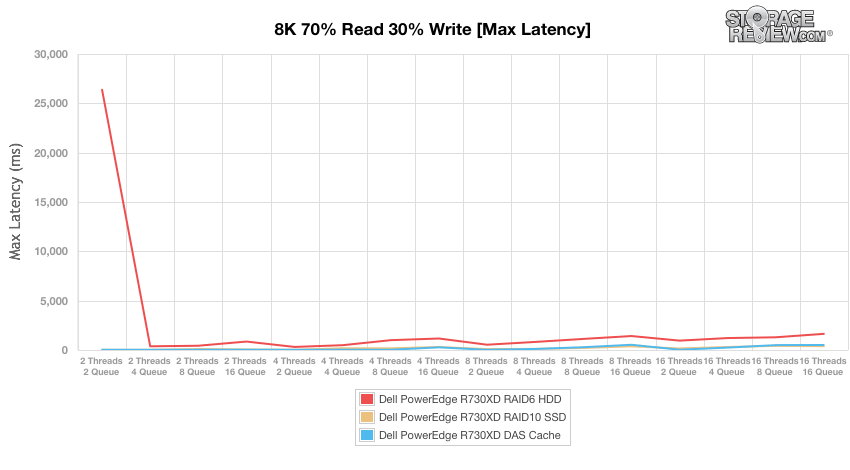 While the DAS Cache configuration also generally mirrored the RAID10 configuration when plotting standard deviation calculations for the 8k 70/30 benchmark, the cached configuration struggled more with high thread counts and queue depths than the RAID10 volume. 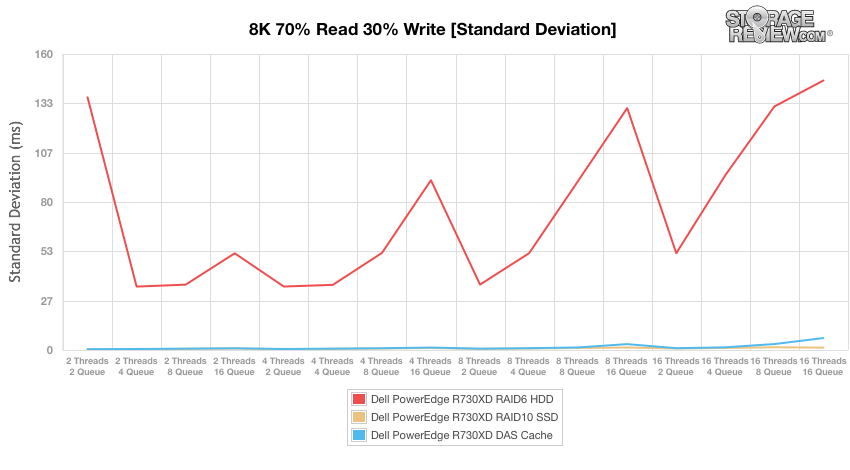 As during the introduction of Dell’s twelfth-generation PowerEdge predecessors last year, the availability of the new PowerEdge R730xd marks a strong bid for the title of highest-performing mainstream 2U storage server without the use of PCIe storage. We appreciate the R730xd’s multiple chassis designs that can accommodate just about any need and then some, thanks to creative engineering in all three configurations. Dell managed to get drives everywhere in the three core configurations, hitting new milestones for density in the process. They also hit on many core use cases including those with an emphasis on capacity (3.5″ config), performance (2.5″ config) and both capacity and performance with the chassis we reviewed.

The hybrid-oriented chassis makes the most compelling argument for the 13G PowerEdge platform by combining dense storage with the ability to utilize a combination of SSDs and HDDs to accelerate performance via new DAS Cache software. The move to SanDisk-backed acceleration software gives Dell a big advantage over their prior-generation caching technology. With only 5 of the 1.8″ SSDs populated, we saw SSD-like performance, even when accelerating the 3.5″ hard drives. With the flexibility to scale our configuration with another 13 SSDs, the options are pretty wide open when it comes to using some SSDs for caching and some in flash volumes for high performance application needs. If the front-mounted storage isn’t enough, Dell supports six PCIe slots that can be used for internal flash storage or additional interconnects.

Ultimately the storage-centric R730xd offers new degrees of flexibility for those who want to keep storage as close as possible to the compute layer. The chassis has a lot of potential in SDS situations too, something Dell likely had in mind as they continue to innovate generation after generation with leading storage server solutions.

The R730xd represents the latest iteration of Dell’s proven PowerEdge server family, bringing new chassis options and higher performance than ever before. The opportunity to implement dense hybrid storage is a particularly compelling dimension to this new offering, showing Dell’s muscle in engineering a complete storage server solution.

Update: The R730xd chassis was used in our review of VSAN beginning here.