The Dell PowerEdge R820 is a versatile and high-performance 2U rack server intended for compute and storage-intensive applications and virtualization in midsize and large enterprises. The R820 provides 48 memory DIMMs with up to 1.5TB of DDR3 along with seven PCIe 3.0 slots, support for optional GPU accelerators, and a selection of Dell Select Network Adapters for connectivity to various major network fabrics without requiring a PCIe slot. The R820 is also available with a compelling feature for accelerating the server’s I/O operations: four optional hot-plug, front-access Express Flash PCIe SSDs for high-performance in-box storage tiering.

The Dell PowerEdge R820 is a versatile and high-performance 2U rack server intended for compute and storage-intensive applications and virtualization in midsize and large enterprises. The R820 provides 48 memory DIMMs with up to 1.5TB of DDR3 along with seven PCIe 3.0 slots, support for optional GPU accelerators, and a selection of Dell Select Network Adapters for connectivity to various major network fabrics without requiring a PCIe slot. The R820 is also available with a compelling feature for accelerating the server’s I/O operations: four optional hot-plug, front-access Express Flash PCIe SSDs for high-performance in-box storage tiering.

Front-access Express Flash drives were introduced with the PowerEdge R720, also a 12th generation PowerEdge server, which has since become a mainstay of our Enterprise Testing Lab. While our review R820 server does not include Express Flash, it’s a key differentiating feature for those wanting the best combination of storage performance and serviceability. Like its sibling, the R820 is offered with Intel Xeon E5 processors. In this case though, the R820 supports four CPUs from the Xeon E5-4600 product family compared with two in the R720. Additional storage features include support for dual RAID controllers and up to 16 internal hard drives.

The in-host storage flexibility of the R820 and the raw compute power of the four Intel CPUs in an efficient 2U package make the R820 appealing in several use cases. The bottom line though is that the R820 gets more done with a smaller footprint than traditional 2U servers. For businesses that require significant horsepower either for specific applications, high user access count or dozens of VMs, the value proposition is pretty clear. By going with a quad-CPU design, they can ultimately save rack space, reduce power consumption and access all of the other associated server maintenance costs that grow as machine count scales.

Our PowerEdge R820 server incorporates four 2.7GHz Intel Xeon E5-4650, each equipped with 64GB of ECC DDR3, giving the server a total capacity of 256GB of RAM. The server also includes iDRAC7 Enterprise for complete out of band remote management, allowing admins to deploy, update, monitor, and maintain the server without the use of agents. For tying together internal storage, the R820 has a Perc H710 RAID card.

The Dell R820 is fully configurable from the Dell site with a starting price of roughly $6900.

The R820 can accommodate up to four processors and is currently available with a selection of eight different members of the Intel Xeon E5-4600 processor family, which include up to eight cores per processor depending on model. Ours utilizes the Intel Xeon E5-4650. The R820 can also leverage up to two actively-cooled 75W NVIDIA Quadro 2000GPUs which in turn provide up to 1GB of dedicated GDDR5 memory, less GPU accelerator support than is available from the PowerEdge R720. Support for up to 7 PCIe cards provides additional customization and upgrade paths.

Dell Select Network Adapter options for the R820 include a number of LAN on Motherboard (LOM) cards in a proprietary network daughter card (NDC) form factor. NDC options supported on the PowerEdge R820 include a selection of 1GbE and 10GbE port cards including 1000 Base-T, 10Gb Base-T, and 10Gb SFP+. 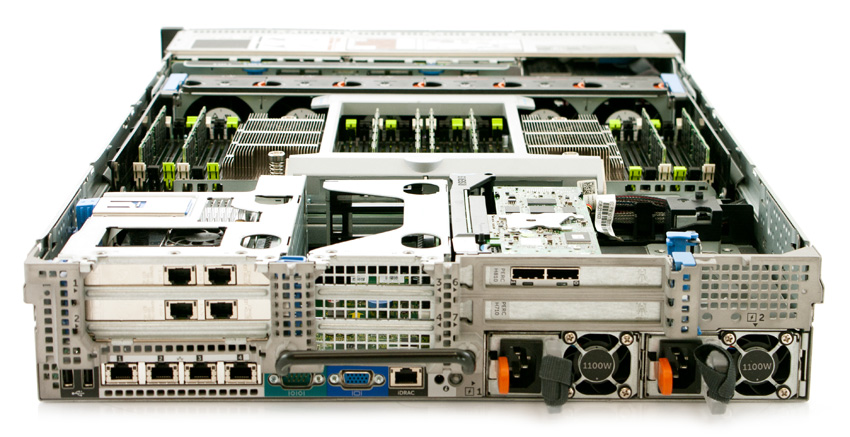 The PowerEdge R820 supports hot-swappable cooling fans in an N+1 configuration, allowing a technician to replace any one fan at a time. As a 12th generation PowerEdge, the R820 also incorporates Dell’s Fresh Air cooling design which allows the server to operate above 35°C/95°F to reduce power consumption and related cooling expenses. The 12th generation PowerEdge platform provides user-selectable cooling configurations for servers that use additional equipment, such as PCIe cards, which can cause automated cooling systems to overheat when sensors are not positioned to detect hot spots. Among the Enterprise Storage Lab’s selection of tier-one servers, the PowerEdge R720 and HP ProLiant DL380p Gen8 offer this feature although Lenovo’s ThinkServer RD630 does not.

The PowerEdge R820 supports up to two power supplies with redundancy, auto-sensing and auto-switching rated at 750W AC, 1100W AC, or 1100W DC depending on the requirements of the customer’s intended configuration. 12th generation PowerEdge systems can limit power consumption inside a datacenter is by capping the system at a user-defined limit when processors are throttled down until the target is reached. This is particularly useful when introducing new servers when there strict power or thermal limits. Our review unit came equipped with two 1100W AC power supplies.

The front of our PowerEdge R820 reflects its 16-slot 2.5″ storage form factor. A lockable bezel is available as an option. At left is a power button and indicator, non-maskable interrupt (NMI) for troubleshooting, VGA monitor connection, a simple LCD control panel, and a vFlash SD media reader for use with iDRAC alongside two USB 2.0 ports.

The rear of the unit offers access to up to two hot-plug power supplies and associated indicators, network connectivity via Dell’s Select Network Adapter family, 2 USB.0 ports, iDRAC7 port, video connector, and serial connector. Dell’s Quick Resource Locator is a QR code that links to administrative and support reference material specific to the server model which can be found in several places on the chassis. 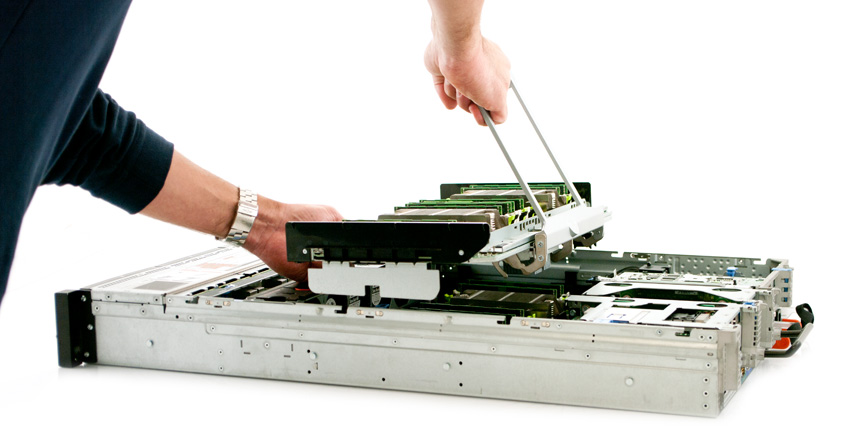 While from the outside it’s difficult to tell the difference between the R720 and the R820, once you open it up you can easily see how the R820 stands out. The support the two additional processors, the R820 includes a daughter board that float above the main motherboard and is connected through a quick-release fitting. But releasing the locking arm, you can lift the entire tray out to gain access to the processors and RAM slots on the motherboard underneath. Dell makes the PowerEdge R820 available in configurations with up to 48 DDR3 memory DIMMs (twice that of the dual-processor R720). Our unit incorporates sixteen 16GB DIMMs giving it a total of 256GB of RAM.

Both sliding and static rail systems are available with tool-less support for four-post racks with square or unthreaded round mounting holes. Both of the rail systems also support tooled mounting in four-post threaded racks, and the static rails can be mounted in two-post Telco racks. An optional cable management arm can be mounted on either the left or right side of the sliding rails without tools.

To install the R820 in the tool-less rails, users hold the server by the front and the rear carrying handle while carefully lowering it into the extended rails with the mounting pins and their corresponding slots aligned. We found this process to be intuitive and faster than other rail systems.

12th generation PowerEdge servers, including both the R820 and the lab’s PowerEdge R720s, are part of Dell’s OpenManage platform for both agent-based and agent-free management. The Integrated Dell Remote Access Controller 7 (iDRAC7) with Lifecycle Controller is at the center of the platform’s OpenManage integration. To integrate with agent-based solutions, OpenManage Server Administration (OMSA) provides one-to-one systems management with a CLI interface or browser-based Java GUI. 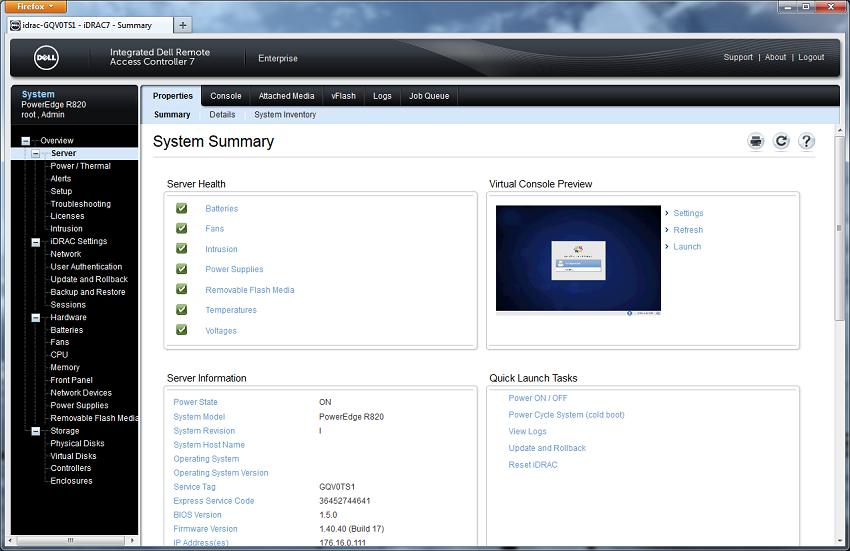 iDRAC7 Enterprise is available for the PowerEdge R820 along with iDRAC7 Express which implements a subset of the features available in the Enterprise edition. Dell OpenManage Power Center provides group power management at the rack, row and data center level. The R820 is capable of redundant failsafe hypervisors to prevent downtime for virtualized systems by use of mirrored SD cards.

As with Dell’s PowerEdge R720, the R820 has a storage performance advantage over other servers when used in conjunction with front-mounted, hot-swappable Express Flash PCIe storage. Beyond the hyper-speed storage backplane options, the R820 has other strengths with an impressive maximum of 48 DIMMs allowing up to 1.5TB of DDR3 memory. Being able to hold massive datasets in memory provides a boost to compute-intensive activities that complement CacheCade’s increase in storage access speeds.

The 12th generation PowerEdge chassis design has proven itself to be a flexible physical platform mounting and serviceability options with most frequently accessed components are easy to reach for service. An impressive variety of available configurations allow customers to closely fit the demands of their specific application, while seven PCIe slots provide plenty of flexibility and room to upgrade. From a deployment and management perspective, iDRAC7 makes putting the R820 into service about as easy as it gets.

While most server use cases don’t require the horsepower and density the R820 provides, there are many where it makes sense. From the storage perspective, the extra CPUs help tremendously when multiple PCIe storage devices are introduced that can benefit from the additional cores. FPGAs and other storage controllers that can leverage the extra compute power to really stretch out their performance even further can really shine in the R820. That’s exactly how the StorageReview lab intends to showcase the platform over the coming months with performance-centric application tests that illustrate some of the best in class storage solutions available in this dense 2U powerhouse.

The Dell PowerEdge R820 12th Generation server is offers a robust combination of hardware options with a proven suite of management features. With high performance Xeon processing, up to 1.5TB DRAM, and optional Express Flash tiered internal storage, it is also one of the fastest compute platforms available.