As we previously mentioned, Dot Hill released a major software update though that amongst other things, optimizes their 4004 controller architecture for hybrid configuration. Like other AssuredSAN models (such their Ultra line we previously reviewed here Ultra48 hybrid and here non-hybrid), the 4004 controller is also the controller in the Dot Hill AssuredSAN 4824 array. And much like the other 4000 series, the 4824 leverages dual AssuredSAN 4004 controllers and can be deployed with swappable Fibre Channel and iSCSI transceivers, including deployments that incorporate both transceiver types. The 4824 is also available with 12Gb SAS connectivity, adding to the flexibility in storage deployment.

As we previously mentioned, Dot Hill released a major software update though that amongst other things, optimizes their 4004 controller architecture for hybrid configuration. Like other AssuredSAN models (such their Ultra line we previously reviewed here Ultra48 hybrid and here non-hybrid), the 4004 controller is also the controller in the Dot Hill AssuredSAN 4824 array. And much like the other 4000 series, the 4824 leverages dual AssuredSAN 4004 controllers and can be deployed with swappable Fibre Channel and iSCSI transceivers, including deployments that incorporate both transceiver types. The 4824 is also available with 12Gb SAS connectivity, adding to the flexibility in storage deployment.

Unlike the Ultra series we reviewed previously, the Dot Hill AssuredSAN 4824 doesn’t have the same drive density. However the 4824 still boasts of the same speeds (6400MB/s sequential read 5300MB/s sequential write), and is designed with media and entertainment in mind. The 4824 supports applications for editing, rendering, and broadcast and can be integrated with StorNext and Xsan to provide storage services for multiple simultaneous streams of 2K, 4K, HD, and 3D video content. Other industries can benefit from the 4824 performance as well including Oil and Gas, high performance computing, and telecommunications.

As previous mentioned, Dot Hill had recently updated their RealStor software. RealStor software has many features that will be beneficial to customers. RealStor uses a streamlined user interface to boost performance in any sized organization. RealTier and RealCache, the first improving performance in real-time as the needs demand and the second boosting read-intensive performance by extending the controller cache. RealStor has a thin provisioning feature, RealThin, which allows IT managers to respond to data growth as needed by streamlining, provisioning, and modifying volumes. A LUN pinning feature allowing certain applications to be pinned to the high performance tier. An automatic pooling feature called RealPool. RealQuick, a rapid RAID rebuild feature that works by only rebuilding the sectors that contain actual data, which results in a faster rebuild as the unnecessary sectors are skipped over. RealSnap is a feature that allows up to 1,024 virtualized snapshots to be taken at a time without impacting storage performance. All of the new features are managed through RealStor’s Storage Management Console, that not only provides support for managing, configuring, and monitoring RealStor’s virtualization features, it can also manage legacy DMS software. For those that prefer it, RAIDar 2.0 is still available.

All Dot Hill AssuredSAN arrays come with a 3-year hardware warranty and a 90-day software warranty. On top of that they also have a “Bronze” level of support that gives customers 24×7 technical support over the telephone, as well as access to online support and the Customer Resource Center, which contains articles, product documentation, and firmware upgrades.

The 4824 can house up to 24 2.5” drives in its 2U chassis. The 4824 can be configured with all hard drives, all SSDs, or any mixture of both. For deployments that require encrypted storage, the 4824 supports 1.2TB encrypted hard drives from HGST and Seagate.

The front of the device has a grill with company branding. Once that is removed all of the drive bays can be accessed. There are 24 hot-swappable drive trays running across the front in groups of 8. Simply pull the latch up, install the drive you wish to use, slide it back into place, and push the latch back down, and you are good to go.

Dot Hill arrays can either be managed with the Storage Management Console or with RAIDar 2.0. For our review we used the new Storage Management Console interface. As we previously mentioned, the new GUI has a much cleaner and polished look and offers real-time performance data for each controller, as well as showing what each storage tier is doing across both controllers. 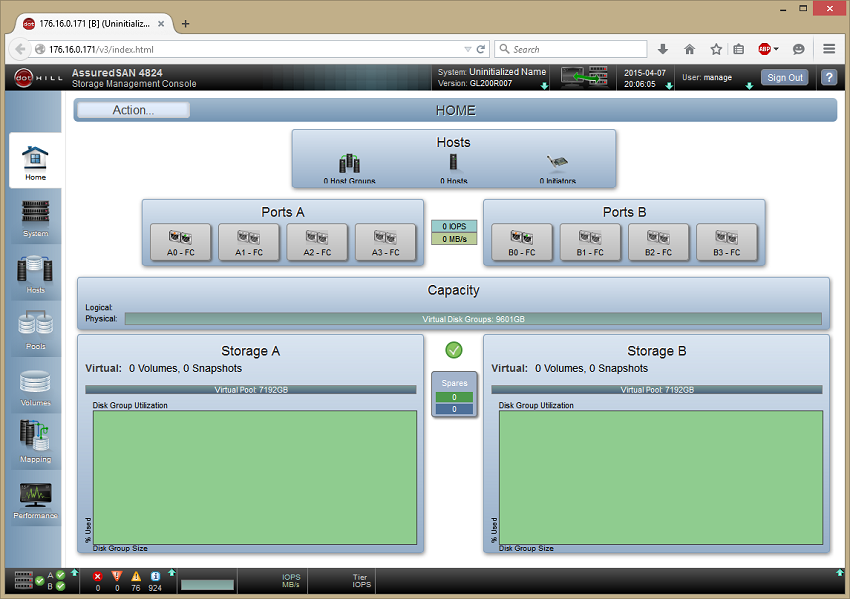 Through the system tab on the left, users can add and configure storage. The wizard will discover the disks available, allow users to setup thin provisioning, set thresholds for the administrator, and format the storage. You can flip over to the rear of the system to check ports. 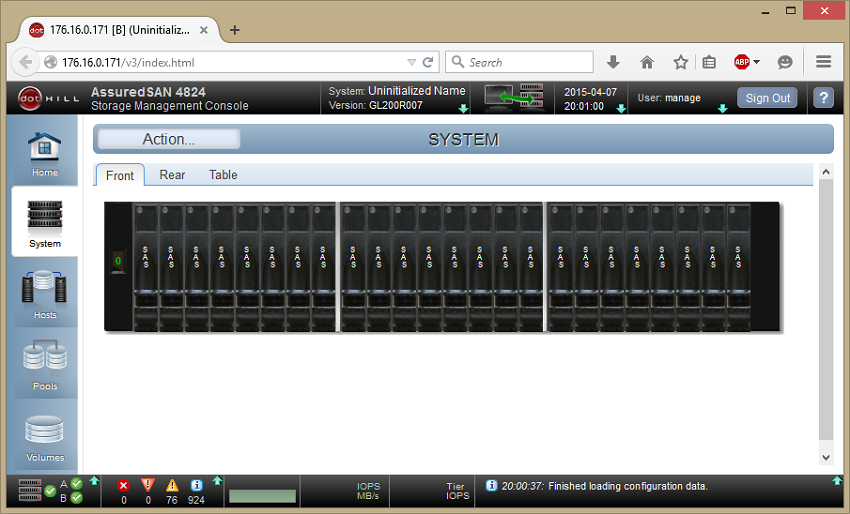 Through the Pools tab users can set up pools and their preferences or they can use RealPool an automatic pooling feature with the new software. 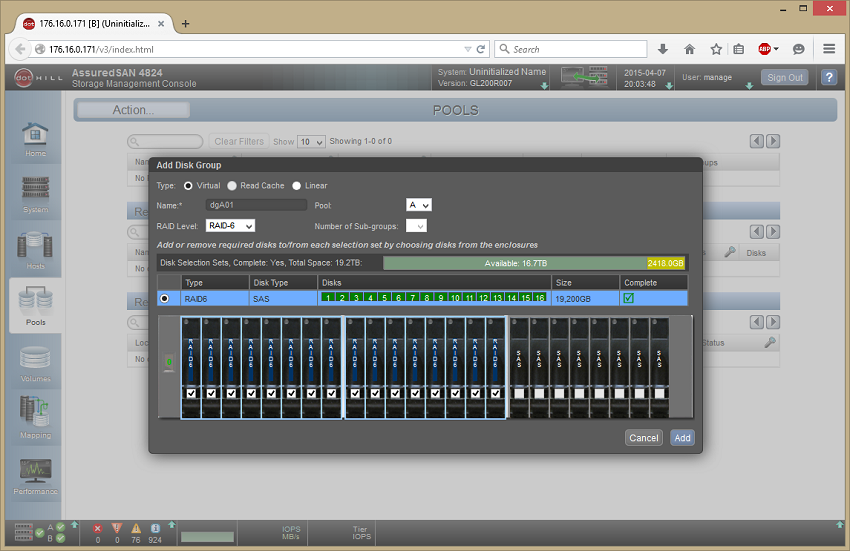 For this review we test 3 different Seagate SAS drives in groups of 16:

In our average transactions per second benchmark, the Seagate Enterprise Performance 15k HDD started out in the top spot and managed to maintain its lead throughout finishing with 890.01 TPS. It narrowly beat out its SSHD cousin throughout the entirety of the test. 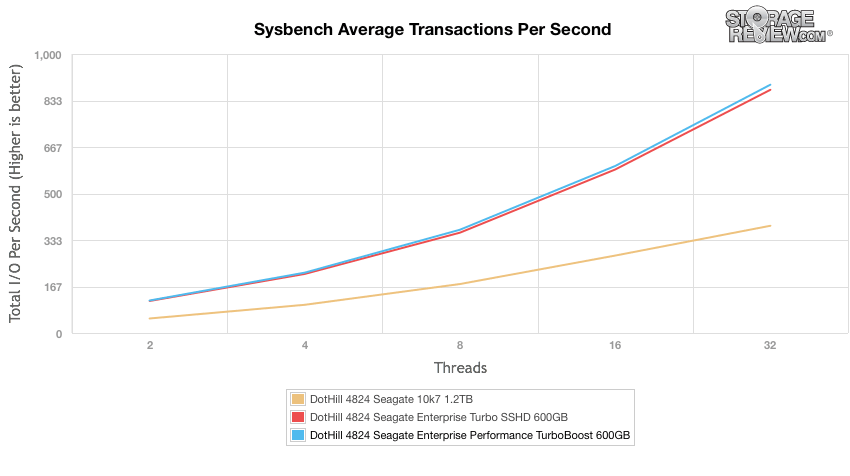 Measuring average latency in our Sysbench MySQL test told a similar story, with the 15k with turbo narrowly beating out the SSHD every step of the way to come out on top again. 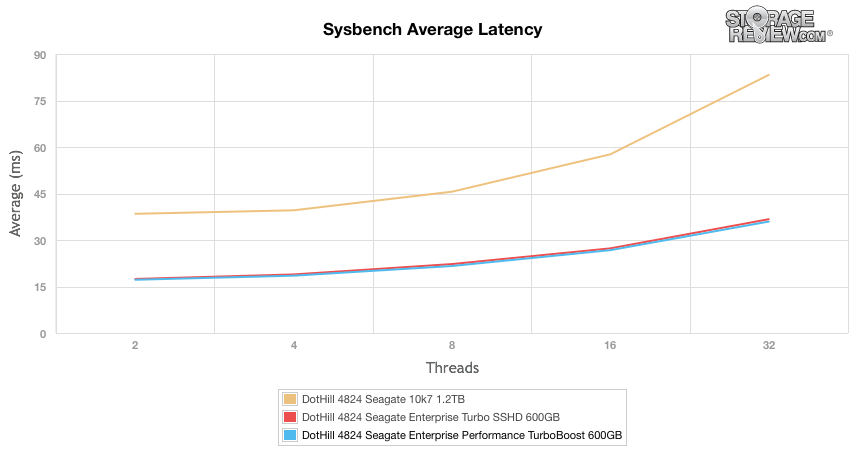 In terms of our worst-case MySQL latency scenario (99th percentile latency), the 15k with turbo repeated its performance by beating the SSHD by a hair every step of the way. 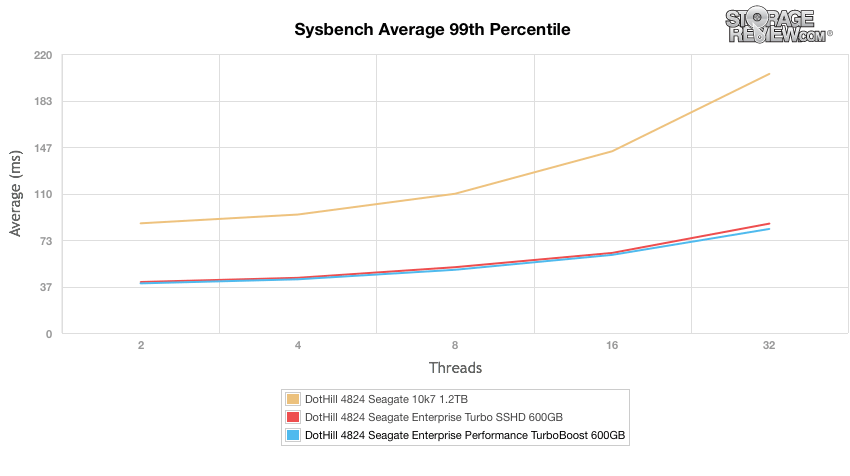 As with the Sysbench test, the results were very similar as far as placement in performance. The 15k with turbo came out in top place in transactions per second with a score of 5364.9 TPS about 300 TPS better than the SSHD.

Looking at latency, the 15k with turbo had the overall lowest latency at 850ms.

Moving to a smaller database size the results overall are much closer. Though the results were all within 20 TPS of each other the 15k with turbo again came out on top with 3,102.4 TPS just about 7 TPS higher than the SSHD.

The latency was also close, within 30ms of each other, but it is a little more clear here that the 15k with turbo was the top performer at 93ms. 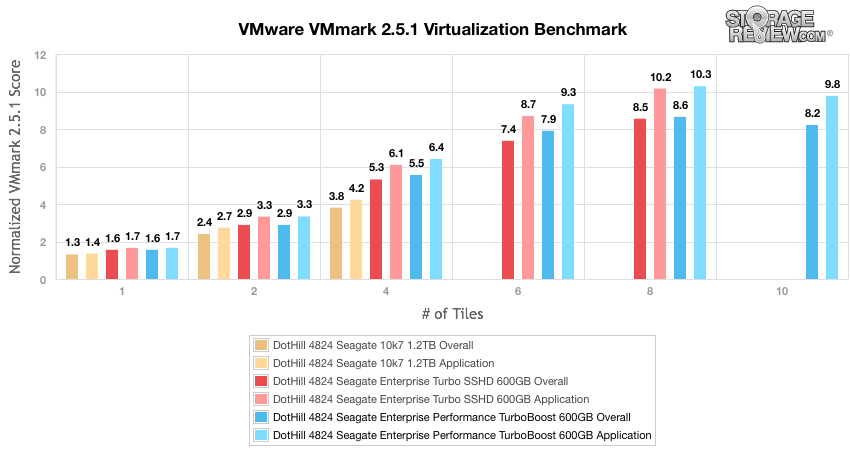 This synthetic analysis incorporates two profiles that are widely used in manufacturer specifications and benchmarks:

Looking at average latency we see similar results to the above, the SSHD again had the best read speed at 4.33ms, and the 15k with turbo had the best write speed at 29.11ms.

With max latency, the SSHD had the best read speeds at 540.4ms and the best write speeds at 327.7ms.

Standard deviation once again had the SSHD come out as the top performer with a read speed of 7.34ms and a write speed of 28.45ms

Compared to the fixed 16 thread, 16 queue max workload we performed in the 100% 4k write test, our mixed workload profiles scale the performance across a wide range of thread/queue combinations. In these tests, we span workload intensity from 2 threads and 2 queue up to 16 threads and 16 queue. In throughput, the 15k with turbo and the SSHD run fairly close but the 15k with turbo managed to take the lead for a majority of the test and peaked at 10,948 IOPS. 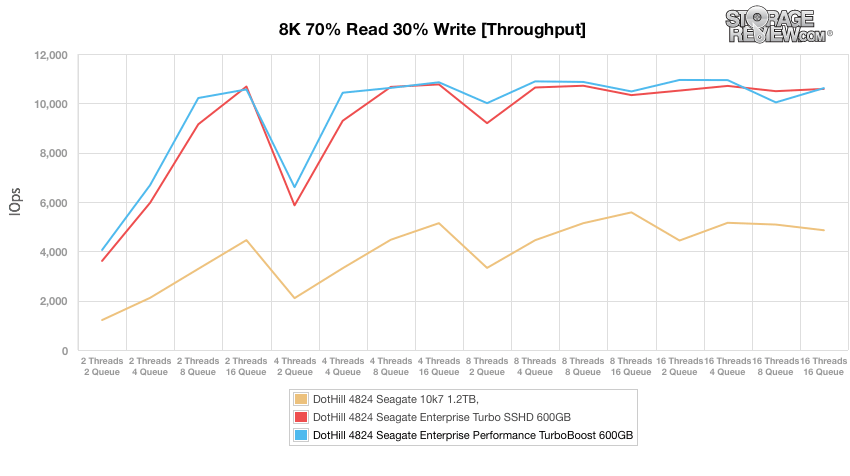 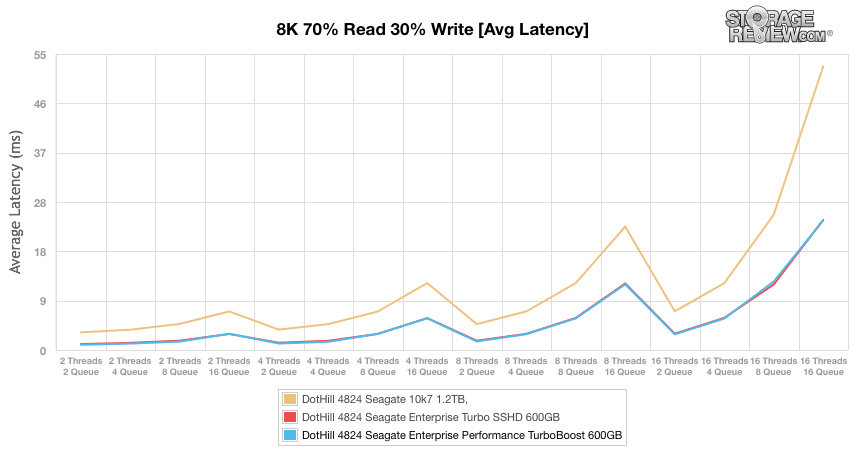 Looking at max latency, both of the hybrid drives showed a fairly inconsistent performance. The 10k7 drive performed at the lowest latency before spiking up in the terminal queue. 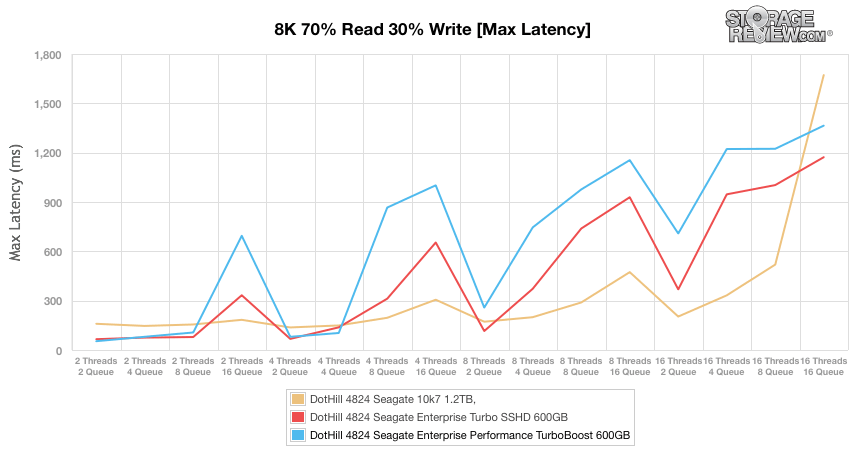 Standard deviation again showed the SSHD to have the best performance and it was not as inconsistent as the max latency. 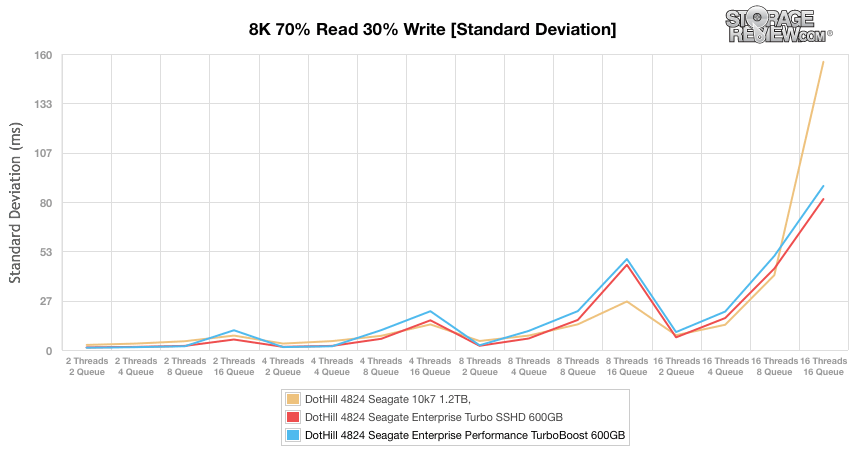 Our Enterprise Synthetic Workload 128K test is a large block sequential test that shows the highest sequential transfer speed for a platter drive. When looking at 128K performance of 100% write and 100% read activity, the 15k with turbo showed the overall best performance once again with read speeds of 3.15GB/s and write speeds of 1.83GB/s.

The Dot Hill AssuredSAN 4824 is a 24 bay 2U SAN with real-time tiering capabilities. The 4824 features dual 4004 controllers and is designed to be used primarily for media and entertainment, but also lends itself well to oil and gas, telecommunications data collecting, HPC, and broadcasting. The 4824 comes with hot-swappable drives, dual controllers, fans, and power supplies. The new RealStor 2.0 software update gives the 4824 even more benefits such as real-time tiering to increase performance, extending the controller cache through the SSDs to dramatically improve read times, LUN pinning allowing applications to be pinned to the high performance tier, automatic pooling, thin provisioning, and a virtualized snapshot features that allows up to 1,024 snapshots to be taken at a time without affecting performance.

While the platform as sold traditionally can’t be used with non-qualified hardware, our numbers can help guide a customer looking for a HDD-based configuration. Looking at performance in our lab with HDDs provided by Seagate, the Dot Hill AssuredSAN performed pretty well in our benchmarks. In SQL Server TPC-C application testing we saw 5,364.9TPS with 30k virtual users with a latency as low as 93ms with 15k virtual users. Our VMmark test made it to 10-tiles using 600GB Seagate 15K SAS drives with TurboBoost technology. Switching over to our synthetic tests, in 4k we saw throughput of 59,024 IOPS read and 8,793 IOPS write, with latency as low as 4.33ms. With 8k 100% read or 100% write we saw throughput of 145,868 IOPS read and 56,367 IOPS write. And with our large block sequential we saw speeds of 3.15GB/s read and 1.83GB/s write. Given our configurations used only 16 of the 24 bays (and no expansion shelfs) we were very pleased by the performance, considering we also didn’t include any SSDs in this review.

The Dot Hill AssuredSAN 4824 packs a lot of performance in its 2U form factor for an attractive starting price. It uses the proven 4004 controller to power through most tasks put its way.