The Drobo 5D is a direct attached storage device (DAS) with five 3.5" carrier-less bays that features USB 3.0 and dual thunderbolt ports. Though similar in design to recent Drobo models, the 5D that we previously announced adds a lot of new features including: support for HDDs and SSDs, increased memory, a faster processor and battery backup. Drobo designed the 5D with media creatives such as video and audio editors in mind understanding their need for high capacity, high performance devices. Drobo offers a couple of other devices in the family such as the Mini which has the same features but with support for four 2.5" drives, as well as the 5N network attached storage device (NAS).

The Drobo 5D is a direct attached storage device (DAS) with five 3.5" carrier-less bays that features USB 3.0 and dual thunderbolt ports. Though similar in design to recent Drobo models, the 5D that we previously announced adds a lot of new features including: support for HDDs and SSDs, increased memory, a faster processor and battery backup. Drobo designed the 5D with media creatives such as video and audio editors in mind understanding their need for high capacity, high performance devices. Drobo offers a couple of other devices in the family such as the Mini which has the same features but with support for four 2.5" drives, as well as the 5N network attached storage device (NAS). 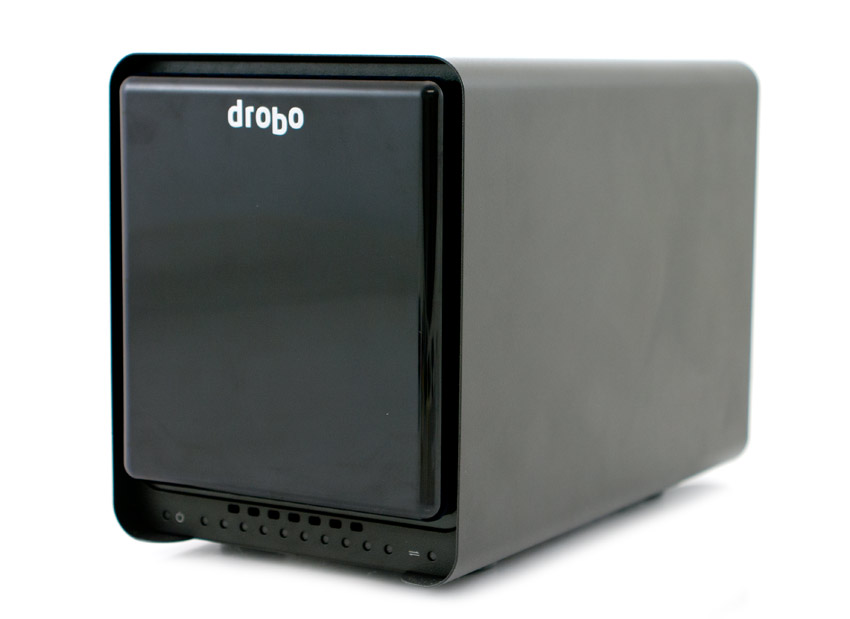 The Drobo 5D benefits from a significant feature set. Uniquely, unlike most other DAS devices, the 5D has a bay on the underside which can house an mSATA SSD to cache critical, frequently accessed data for increased performance. Users can choose a smaller capacity mSATA drive if their HDDs aren’t capacity robust, or they could swap in a larger 128GB or 256GB mSATA SSD to heat up performance more significantly. The 5D also offers BeyondRAID technology with single or dual drive redundancy to provide data protection. Additionally, drives can be swapped for storage expansion instantly. Rounding out the features, there are two Thunderbolt ports – one of which supports daisy-chaining to enable users to utilize the speed of Thunderbolt on their other devices.

The Drobo 5D is available now with a 2 year warranty and a $775 street price. That includes both a Thunderbolt and a USB 3.0 cable.

The Drobo 5D has a unique design because of its completely tool-less access to its carrier-less bays, but before we get to that, we’ll have a look at its build and quality. The whole device is black and is enclosed in solid metal to keep the unit cool. Drobo employs plastic for several other parts of the build, unlike some more premium looking comparables such as the LaCie 5big NAS Pro. The rear grille, the door, and the bay enclosure are all composed of plastic. Overall, the exterior enclosure feels solid, but some of the plastic pieces such as the bay flaps feel flimsy. 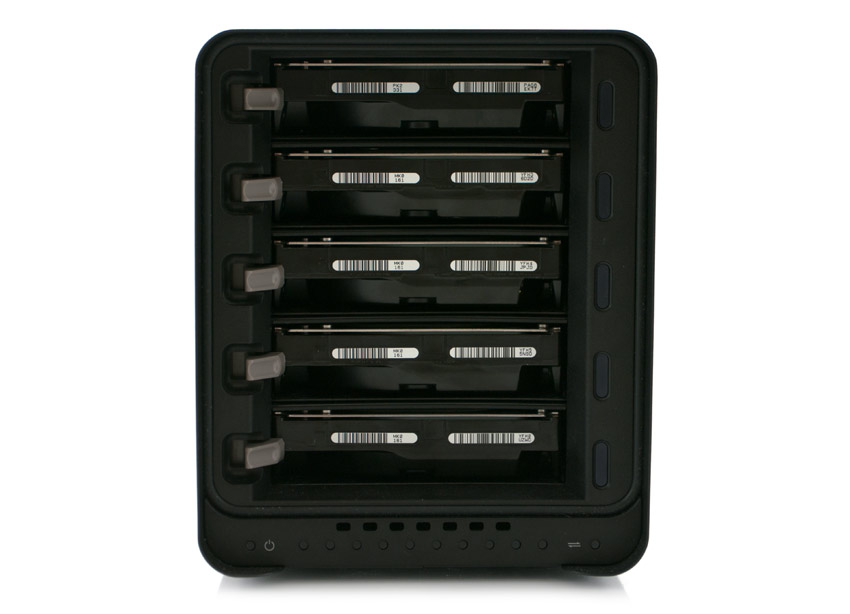 The 5D has a ventilated magnetic door that allows the drives to have breathing room and gives users easy access for maintenance or hot-swapping during an upgrade or replacement. The door is embossed with the Drobo logo, and it also has tiny windows so that users can still see the drive health LEDs even with the door fixed onto the unit. At the base of the unit, there are a series of indicator lights. With the door off, users can see the carrier-less bays, each with their own indicator light. (The inside of the magnetic door has a sticker telling users what the LEDs signify.) To insert a drive, users can push back a gray spring-loaded piece and slide the drive into the bay. Of the DAS and NAS units that we’ve reviewed, this is the simplest for drive installation. 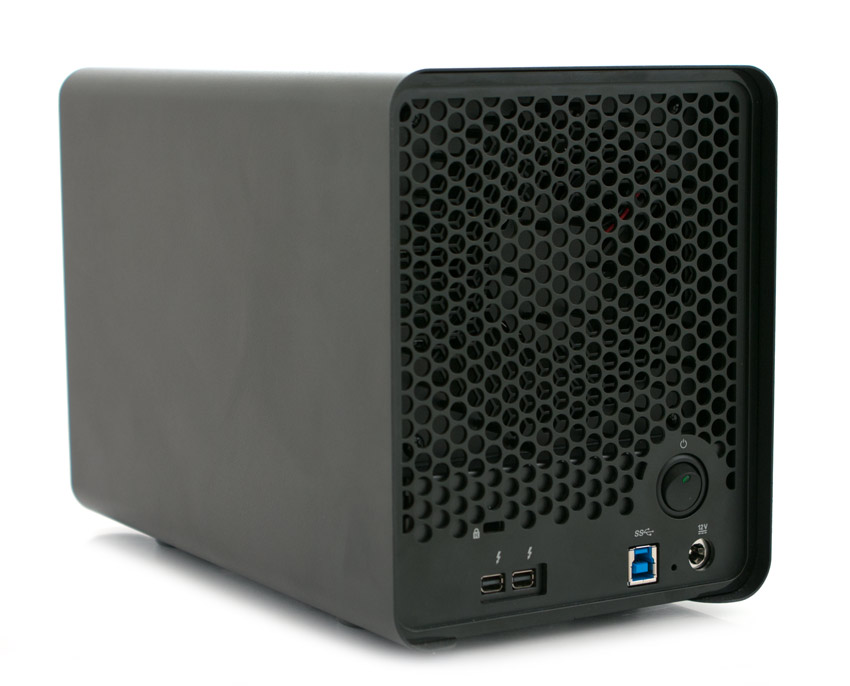 The rear and underside of the 5D provide the rest of the functionality. The bottom of the unit has four rubber feet to keep the 5D from sliding around. Additionally, this is where the mSATA SSD bay is located. Access is instant; with just the push of a latch users can install the mSATA drive in two or three seconds. The mSATA drive doesn’t feel as though it’s held securely, but it did function nonetheless. Looking at the back of the unit, a plastic grille covers the rear, and about half an inch deeper into the unit sits another grille designed to ventilate the updated larger fan. Also on the back, users will find the power switch, USB 3.0 and Thunderbolt ports, a reset pinhole button, Kensington lock slot, and the power input. 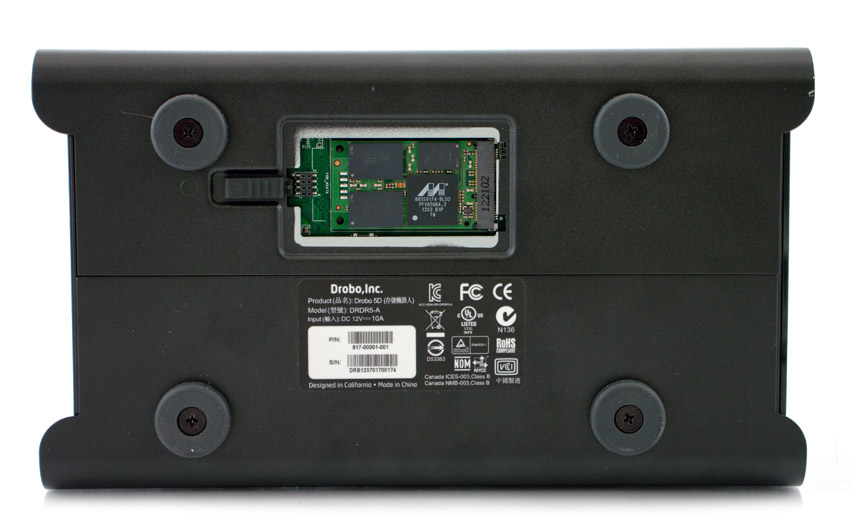 One of the interesting features with the 5D is that it supports SSDs and HDDs; however to use the SSDs users will need to acquire a carrier. Drobo’s idea is that users can increase capacity or performance by mixing drives, and they don’t have to buy a whole set of drives to fill the unit. Also noteworthy, while the device supports mSATA, Drobo’s website says they don’t support all mSATA and lists options that they do support: OCZ Deneva 2 for Drobo, Intel 310 Series 40GB, Kingston mS100, and the Crucial M4. Lastly, one of the most interesting new features is that the 5D has an integrated battery that automatically recharges itself. In the event of a power failure, it protects in-flight data.

Setting up the Drobo 5D is extremely simple. With the drives inserted into the carrier-less bays and the power and interface cables plugged in, users can get started installing the included software. From there, Drobo keeps everything simple. The dashboard has a really smooth layout that’s easy to read and operate. From it, the left side features tabs that enable users to check the status of their drives as well as the capacity used and volume allocation. When users select their Drobo, they can view drive and system information. Users can look at each drive to see which drive it is (make and model, serial number, capacity, etc.), and can view the mSATA information as well. 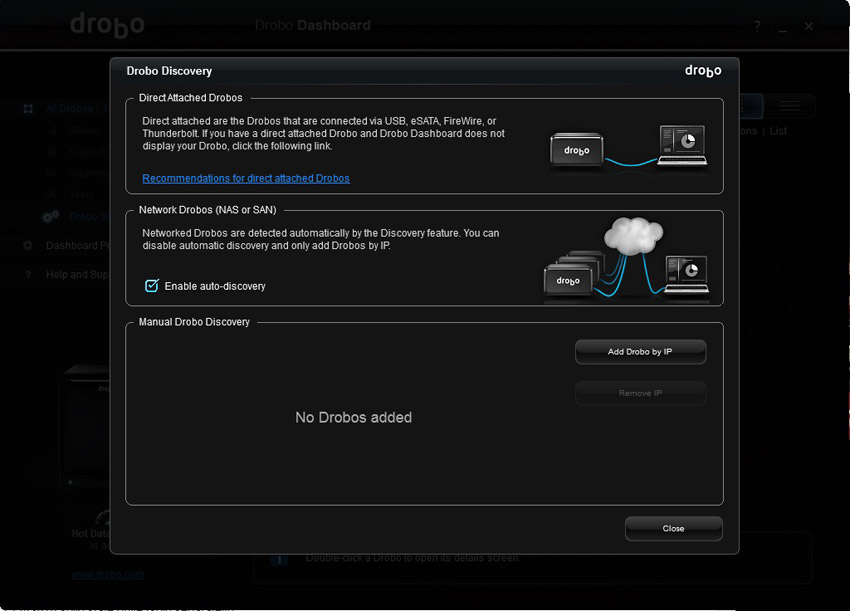 The tools section enables users to perform a wide range of functions. They can reset or shutdown the 5D and update the device. It’s here that users can also select a name for the device and format the drives if necessary. The remaining function in tools is to blink the lights on the device, particularly handy in identifying the device for those who have several Drobo devices installed. 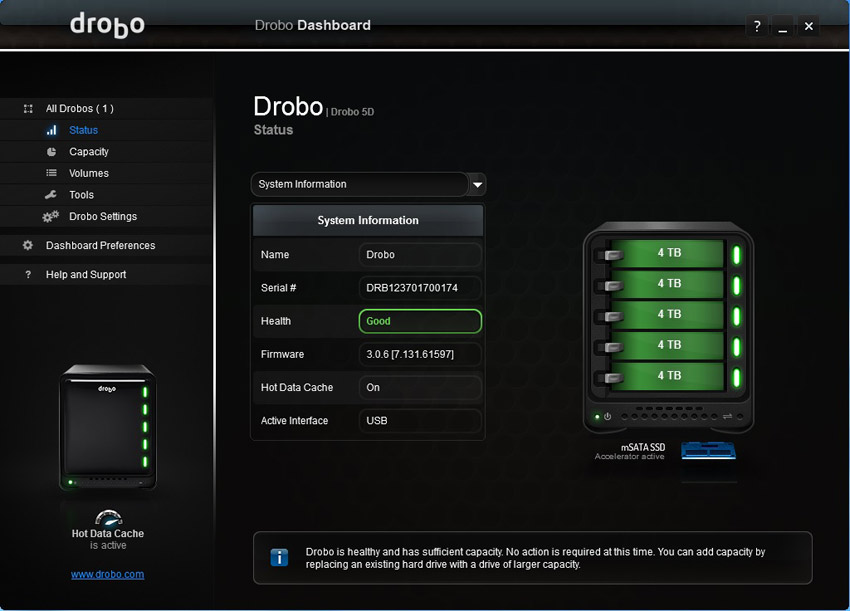 Drobo Settings comes next which allows users to rename the device, select RAID, and change some device settings. Here, users can select Disk Drive Spindown to set when the drives will spin down to conserve power. Also, users can dim the LEDs on the Drobo here using a 1-10 scale. Setting them to 1 makes them barely noticeable, especially with the door attached. Perhaps the most important setting here is the RAID option. As with other Drobos, the 5D uses DroboRAID which enables either single of dual-redundancy.

Lastly, moving down to Dashboard preferences, users can set e-mail and onscreen notifications and they can also set up the Drobo Discovery Settings. The software will find any DAS, NAS, or SAN Drobos and show them in the dashboard for management.

The Drobo 5D’s default RAID setting is single redundancy, and we tested in that mode using a 5GB file size. We started with 2MB sequential speeds which measured 203.04MB/s for read activity and 155.64MB/s for write activity. Random large-block transfers measured 21.40MB/s read and 142.55MB/s write. While these figures may seem strong for an external storage solution in general, they don’t come close to what other competing 2/4/5-bay models offer in peak bandwidth, primarily from overhead from Drobo’s BeyondRAID.

Drobo doesn’t provide a driver to support Thunderbolt in Windows (unlike competing solutions), so we also tested the Drobo 5D over Thunderbolt interface utilizing the latest generation MacBook Air. Using Black Magic, we tested with a 5GB file size, and the Drobo 5D registered 295MB/s read and 220MB/s write. We installed the same Intel SSD 525 240GB mSATA referenced above, and after having waited several minutes to let the cache warm up, the Drobo 5D posted an average of 310MB/s read and 230 MB/s write. We performed the same test, this time installing the Micron RealSSD C400 mSATA 128GB, and the results were near-identical. The caching from the mSATAs made a minor difference, but it wasn’t dramatic. We also tested the Drobo 5D using Xbench 1.3. In 4k testing, the uncached read and write rates were 3.70MB/s and 10.93MB/s, respectively.

For comparables, we tested the DataTale RS-M4T, LaCie 5big Thunderbolt RAID and WD My Book VelociRaptor Duo. These devices all setup shop in the same type of market as the Drobo 5D in which users need high-end performance and the ability to utilize substantial capacity. Noted as we go along, the comparables were tested over some similar and differing configurations.

We then looked at the LaCie 5big Thunderbolt RAID where we used Blackmagic Disk Speed Test running on an Apple Mac Mini. With the 5-disk array configured in a RAID 0 mode, we measured sequential transfers speeds of 640.5MB/s read and 718.7MB/s write. Changing to RAID 1 utilizing 2 drives (no RAID 10 as the unit has 5 drives), we measured transfer speeds of 154.3MB/s read and 169.7MB/s write.

Then, we moved to the WD My Book VelociRaptor Duo. In the RAID 0 configuration, it was able to perform sequential file transfers at 373MB/s read and 364MB/s write. For random transfers, the RAID 0 Duo configuration performed with a read and write speed of 197.84 MB/s and 233.16, respectively.

The Drobo 5D is a DAS that features 5 carrier-less bays as well as USB 3.0 and daisy-chainable Thunderbolt connectivity. The device allows users to input and mix both standard HDDs and more performance-oriented SSDs. Additionally, the bottom of the 5D features an mSATA bay for users looking to increase performance and create a hybrid environment using their optionally installed mSATA SSD to cache critical applications. Another new feature for the Drobo 5D is a rechargeable battery that will continue to power the device in the event of an unexpected power failure so that data can be saved before the device shuts down.

The 5D’s overall design provides the most hassle-free access to hot-swapping drives for maintenance or upgrades on the market due to the 5D being carrier-less. Additionally, the dashboard is well laid-out and extremely simple to use, while still providing the functionality required to get the job done. While the 5D’s physical build quality lacks the high level of refinement found on competing models such as the LaCie models, it’s easier to overlook with incredibly easy installation and management.

Testing the Drobo 5D, it slipped behind the competing models in 2MB sequential testing, although it still stayed close to fully saturating USB 3.0 speeds. As we moved into the 2MB random testing however, the read activity suffered, managing only 21MB/s, even with mSATA SSD caching. That’s a fraction of the performance of competing models, which don’t have complex RAID overhead. In all of our tests, we saw no large impact from the mSATA SSD cache, as most gains could be had by other RAID solutions by the increased spindle count or hardware RAID DRAM cache. When we first started testing the 5D, we expected similar behavior that you might find from caching products which give you cached performance close to that of the SSD backing the array. In the case of the Drobo 5D though, gains were much lower than we had hoped.

The Drobo 5D delivers ease-of-use throughout with quick and intuitive drive installation and straightforward management. With the option to mix and match HDDs and SSDs, as well as optional mSATA implementation, the 5D provides users with a high-capacity, flexible DAS option. The mSATA cache is a nice feature, but at this time its performance benefits are limited.