The 5N2 is Drobo's 7th new product after undergoing an organizational management overhaul in 2015, which has represented their shift to an emphasis on simplicity and streamlined consumer experience. These new objectives are aptly addressed in their new 5-bay NAS, which seems to have been designed with the user in mind. While the importance of a streamlined user experience can't be understated, the market has come to expect strong performance numbers thanks to companies like Synology, QNAP, Netgear, Seagate and Western Digital. The 5N2 includes several novel features that are worth noting, including mixed drive size utilization and at-a-glance storage monitoring. Drobo also added a few of their business features to the 5N2, including SSD cache and dual Ethernet ports.

The 5N2 is Drobo's 7th new product after undergoing an organizational management overhaul in 2015, which has represented their shift to an emphasis on simplicity and streamlined consumer experience. These new objectives are aptly addressed in their new 5-bay NAS, which seems to have been designed with the user in mind. While the importance of a streamlined user experience can't be understated, the market has come to expect strong performance numbers thanks to companies like Synology, QNAP, Netgear, Seagate and Western Digital. The 5N2 includes several novel features that are worth noting, including mixed drive size utilization and at-a-glance storage monitoring. Drobo also added a few of their business features to the 5N2, including SSD cache and dual Ethernet ports. 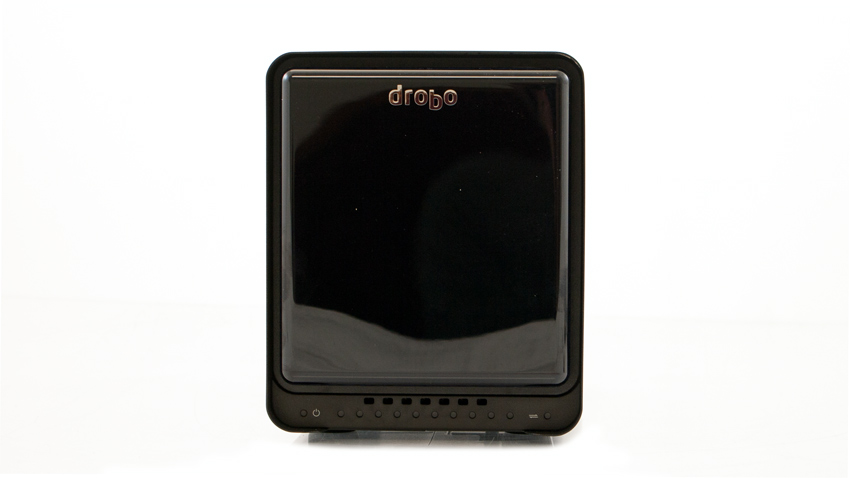 Drobo designed the 5N2 to be as user-friendly as possible, which is first enjoyed with its easy deployment process. Thanks to simple instructions and great drive compatibility, it's reasonable to expect that almost any user could get their 5N2 up and running, regardless of prior technical experience. The 5N2 can accept any combination of drive volumes, which isn't common in competing brands (although this will probably affect performance). Two or more 5N2 units can be unified under DroboDR, which backs up user data in the event of drive or system failure. The 5N2 also comes with an internal battery that kicks in during power outage and further protects against data loss by flushing the system RAM to the persistent storage.

Drobo also designed their browser interface (myDrobo) to be as simple and approachable as possible, even for entry-level users. Although many of Drobo's apps are embedded in the functionality of the 5N2, some helpful apps remain available to the user, including DroboAccess (for remote access) and DroboPix (for management of mobile photos and videos). Overall, Drobo doesn't offer a very extensive app library, especially when compared to other popular NAS platforms, but there are quite a few options.

The Drobo 5N2 probably uses the same chassis as its predecessor (the 5N) albeit with a few small changes. The NAS has a standard rectangular shape with a black finish and a very simple layout, although Drobo does include a limited edition GelaSkin magnet with purchase (at the time of this review's publishing). There are five large LEDs oriented vertically along the right side of the device's face, which correspond to each drive's status. There is another line of small blue LEDs oriented horizontally along the bottom, which correspond to the system's current data usage (in intervals of 10%). The system power LED is found at the bottom left-hand corner, and the LAN status LED is located at the bottom right-hand corner. 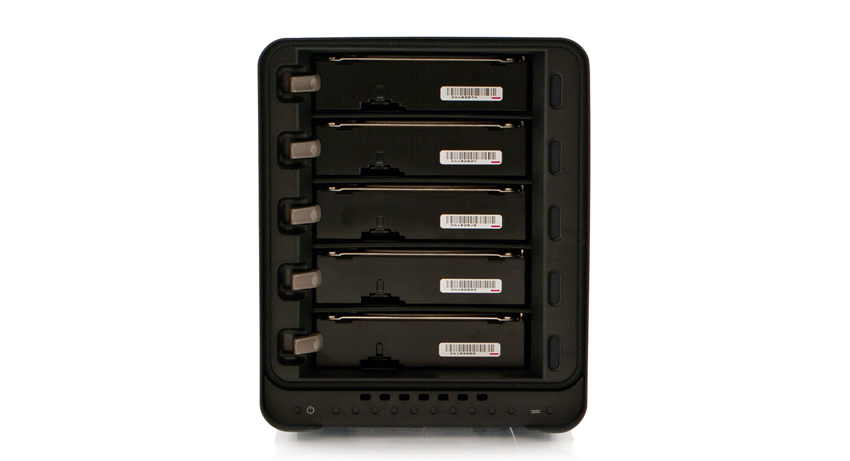 The back of the device is very simply laid out, with most of the surface area encompassing ventilation holes. The ports are oriented along the bottom, with two ethernet ports, one Kensington lock port, the power port, and the power button (from left to right). 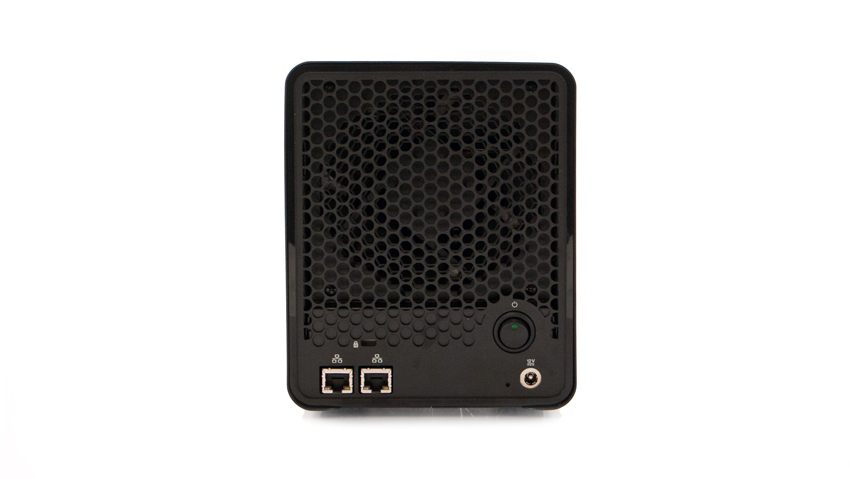 On the bottom of the device is the small panel that pops off and enables users to install an mSATA drive for SSD cache. 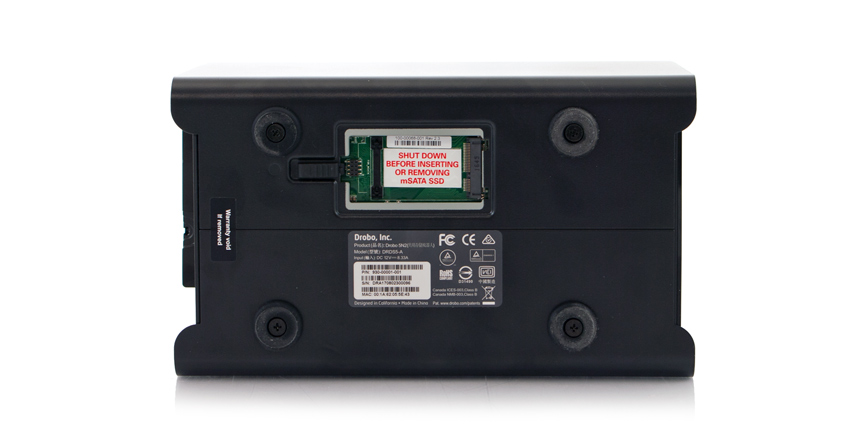 Drobo's management interface (Drobo Dashboard) is fairly intuitive overall, and first-time users could probably figure out how to deploy and troubleshoot their 5N2 without much trouble. The home screen gives a general overview of the 5N2, with navigation along the left side of the screen. Users can immediately see whether or not their 5N2 is functioning properly. 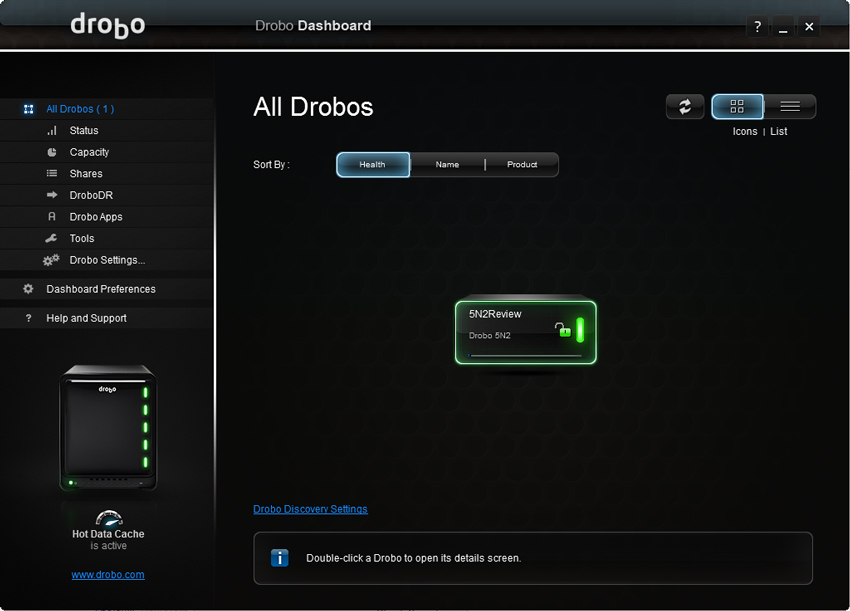 The status tab yields a more comprehensive assessment of the 5N2's functionality and information, including the health of each installed drive, the serial number, firmware version, uptime, and hot data cache (SSD cache). Network information can also be accessed through the status tab. 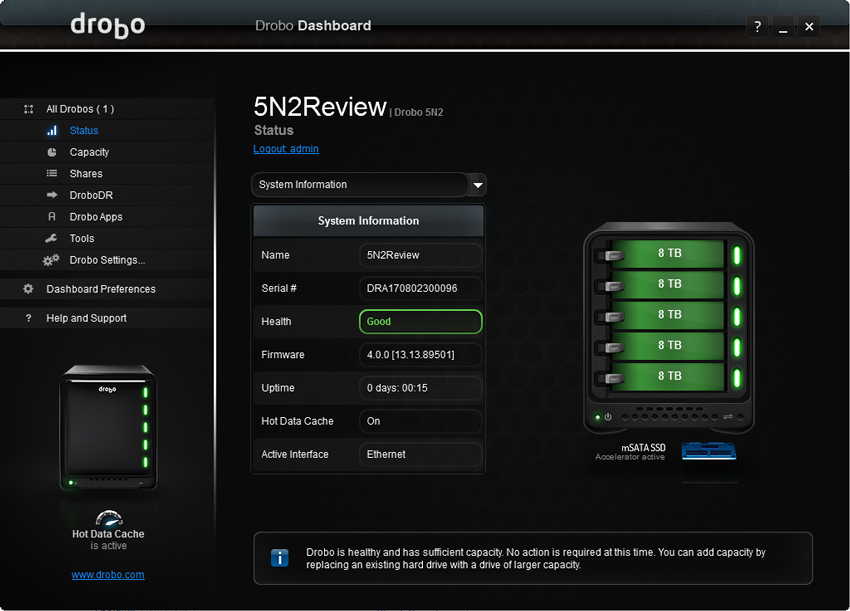 The capacity tab shows the total capacity of the 5N2, as well as the used space and available space. 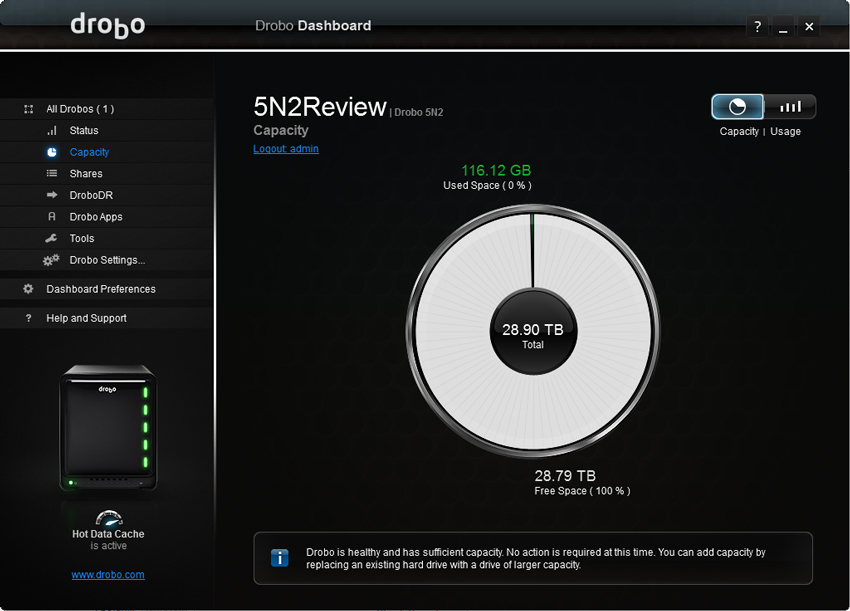 The status of each created share folder is accessible through the Shares tab. Users can also use this tab to create new shares, and adjust administrative settings. 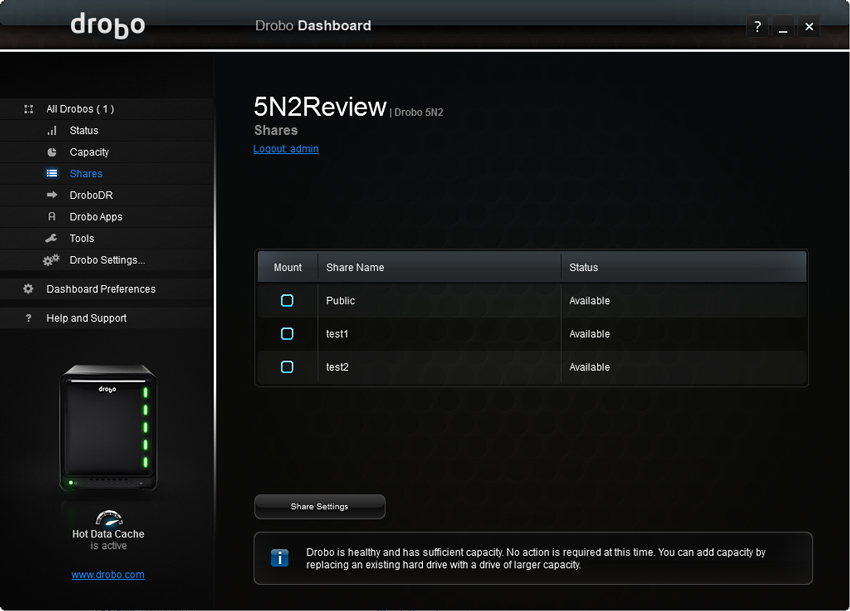 Drobo's disaster recovery feature can be activated and managed through the DroboDR tab. The 5N2 can be assigned as either a source or target for backups, and users can schedule routine backups at a specific time. 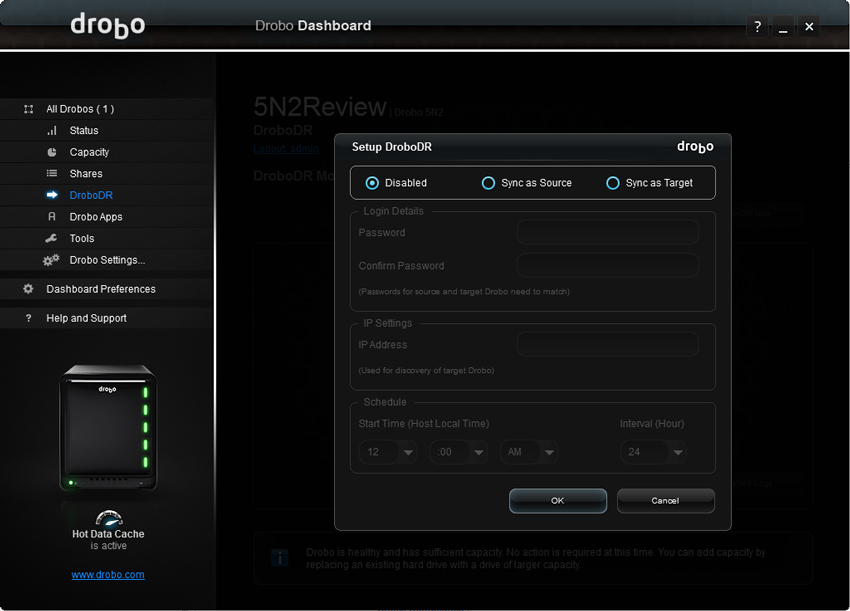 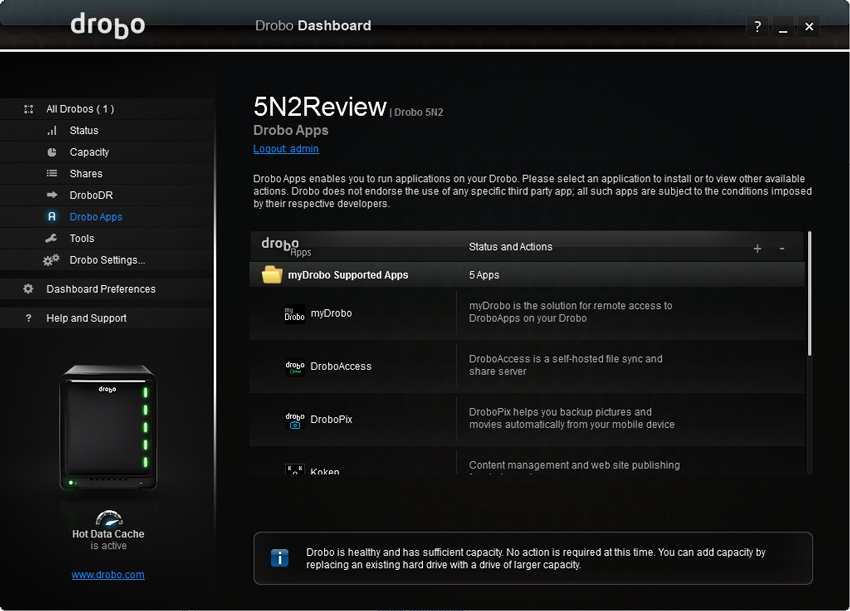 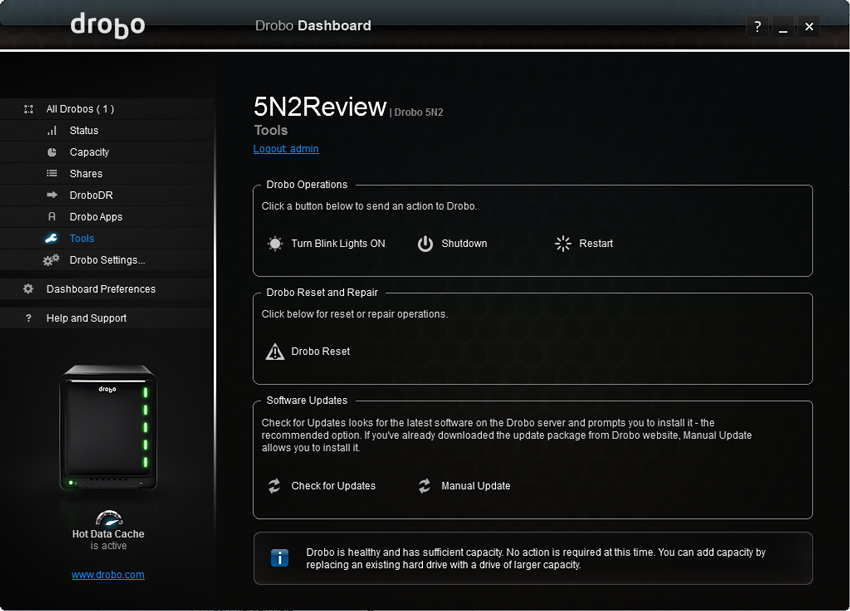 The Drobo settings tab has the dual disk redundancy setting (to protect against two simultaneous drive failures) as well as disk drive spindown (more or less a hibernation function). Users can also dim the LED lights of the 5N2 through this tab. 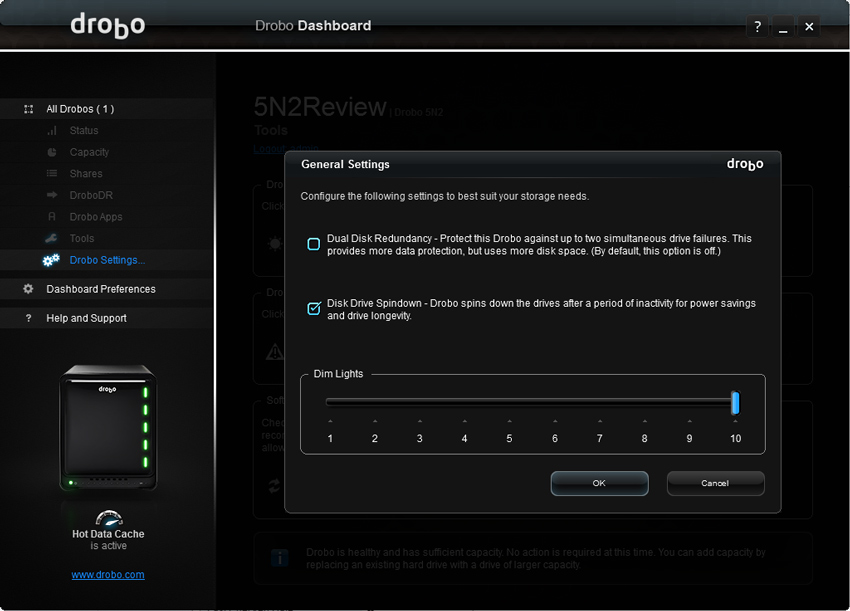 Our enterprise hard drive benchmark process preconditions each drive into steady-state with the same workload the device will be tested with under a heavy load of 16 threads with an outstanding queue of 16 per thread, and then tested in set intervals in multiple thread/queue depth profiles to show performance under light and heavy usage. Since hard drives reach their rated performance level very quickly, we only graph out the main sections of each test. Although we typically include several metrics for each of our performance profiles (i.e., throughput, average latency, max latency, and standard deviation), we will only be providing throughput results for this review.

Although Drobo's new 5N2 includes several features that would appeal to entry-level users, it doesn't stand up to modern performance standards. In most of our performance benchmarks, the 5N2 was completely outclassed by our selected comparable NAS units (Synology DS1515+ and Synology DS1515). In our 8k sequential benchmark, the 5N2 was outperformed by its competitors by a factor of five, the Drobo saw read performance of 9,731 IOPS and write performance of 8,794 IOPS compared to the slower Synology’s 40,676 IOPS read and 30,617 IOPS write. In our 128k benchmark, the Synology units with four 1G network ports available doubled the 5N2's performance, 454MB/s read and 434MB/s write for the slower Synology versus the Drobo’s 231MB/s read and 227MB/s write. To make matters worse, Drobo's SSD cache feature, which is designed to utilize the benefit of faster SSD transfer speeds, slowed down the 5N2 more often than not.

That said, if Drobo can improve their substantial performance and quality control issues, their products could be appealing to some users; one thing that the 5N2 has going for it is its extreme simplicity and ease of use. As private cloud computing continues to creep its way into the mainstream consumer storage market, the need for an ultra user-friendly option is becoming much more relevant.

Although Drobo still has much to address in terms of performance and feature content, their experience-oriented approach to cloud computing could help hoist them onto the playing field in the future.