In addition to Mac compatibility and rapid transfer speeds, the Thunderbolt 2 connectivity brings easy daisy chaining to the Studio line, allowing for up to six daisy-chained devices. G-Technology has also placed particular emphasis on the plug-and-play functionality of this line, which spares lots of time during setup and excessive wiring. However, if a Windows setup is used, then this advantage goes out the window; the system must first be reformatted and the connectivity modulated. G-Technology also emphasizes that all of the products in the Studio line have built-in RAID controllers, and are not confined to any one workstation. This combined with the easy plug-and-play setup greatly enhances the mobility of the line (although the nearly 20lb G-SPEED Studio XL will realistically be staying at the same workstation most of the time).

The G-RAID Studio and G-SPEED Studio XL represent the two poles of the Studio line. The G-RAID Studio could serve a new professional or enthusiast through the beginning of their career at a lower price point, and the G-SPEED Studio XL will serve professionals that require top-quality performance and maximal capacity (and can handle the price tag). However, the G-SPEED Studio remains the most applicable and versatile member of the Studio family, and will probably be sufficient for the majority of customers.

G-Technology makes a few other 4-bay attached storage devices that are less geared towards Mac users, all lacking Thunderbolt 2 connectivity with a drop-off in performance and maximum capacity (all 16TB). The G-SPEED eS PRO is intended to be used to support 1080p video edits with decent transfer speeds. It makes use of eSATA connectivity and carries a price tag of $2,199.95. The G-SPEED eS is a step down from the PRO, and is intended to be used in 720-480p edits. It sell for $2,099.95 and also has eSATA connectivity. The last non-Thunderbolt 2 4-bay is the G-SPEED Q, which mostly provides RAID protection and a large capacity, without much in the way of performance. It has USB 3.0, eSATA, and FireWire 800 interfaces and costs $1,999.95.

G-Technology worked with Apple and Intel in the design of the G-SPEED Studio, which is proven in its minimalistic and sleek chassis. The device in general is symmetrical and somewhat cylindrical with mostly glossy black outer coverings and very little branding. The front is seamless with an all-black and slightly rounded face and a plain white “G” horizontally centered and slightly below the vertical center, which lights up when powered on. Its sides are lacking in any defining features. The drives are accessed through the head of the device with a button-operated latch that pops the top off exposing the four bays (each of which are extricated with a button and typical sliding mechanism). Each drive has a corresponding LED, which flashes blue and red during initialization, and flashes brighter during transfers. Its back is very stripped-down compared to most attached storage devices, only supporting up to three wires total (two Thunderbolt 2 ports and the AC adaptor). There is a power button and a mute button, as well as a Kensington lock. All of these are located in a small indentation close to the bottom, as well as a small vent. The majority of the back of the device is taken up by a large vented space corresponding to G-Technology’s use of smart cooling. Directly above the large vented space is a discrete handle.

Setting up the G-SPEED Studio is quite easy and straightforward. It ships pre-configured in RAID5, and the user simply follows G-Technology’s 4-step installation, including downloading the G-Technology Assistant through their website. The G-SPEED Studio simply appears as a drive on the desktop and under Devices in Finder. The Assistant is very well made and easy-to-use. It feels like any other Mac utility, and has a Dashboard, Wizard, Physical Drive, Disk Array, Logical Drive, System Information, Events, and Background Activities tab. The Disk Array tab contains general information regarding all logical and physical drives, and it allows the user to access general disk settings.

Logical drives can be created easily with the desired RAID and partition settings. As a whole, the interface is a lot easier to use than some others that we have seen with hardware RAID, especially in comparison to the interface that LaCie uses (we compare the performance of the G-SPEED Studio to that of LaCie’s 5big below). The G-SPEED Studio can be disconnected simply by “ejecting” in Finder. Its ease-of-use, coupled with G-Technology’s free support, would allow the G-SPEED Studio to be managed without a lot of administrative experience. We measured transfer speeds from the G-SPEED Studio by connecting it a current generation MacBook Pro (with Thunderbolt 2 connectivity) and using the Blackmagic Disk Speed Test with a 5GB test file. Its performance is compared herein to the recently reviewed LaCie 5big, a 5-bay attached storage device designed for similar use-cases at a lower price-point with slightly slower transfer speeds but similar capacity configurations (10TB, 20TB, and 30TB for $1,299, $1,999, and $2,999, respectively). Both devices used 6TB HDDs and were tested in the following configurations (Studio, 5big, respectively):

The Studio was first tested in RAID0. Generally speaking, it performed fairly well; it posted transfer speeds of 628.2MB/s and 745.9MB/s in read and write, respectively. However, the 5big was a bit faster in both, with 805.1MB/s in read and 789.1MB/s in write largely thanks to the extra drive. 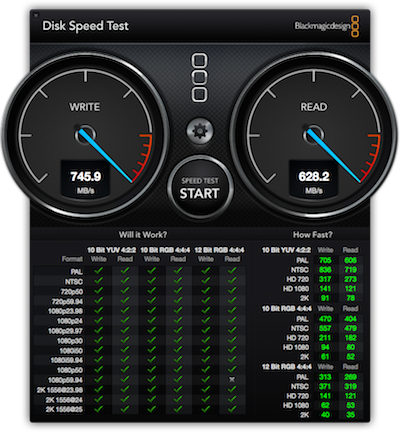 The standings were similar in RAID5, although both the Studio and 5big slowed down by about 200MB/s in almost each measurement. The Studio performed read transfers at a rate of 487.8MB/s and write transfers at a rate of 576.8MB/s. The 5big showed a read speed of 542.1MB/s, but its write speed (758.3MB/s) was barely diminished from the RAID0 configuration, beating the Studio by about 200MB/s. Our last benchmark measured the Studio’s performance in when configured in RAID10. Unlike the past two tests, the Studio outperformed the 5big in both read and write, posting speeds of 507.9MB/s and 413.1MB/s, respectively (the 5big posted 328.6MB/s and 345MB/s, respectively). The G-SPEED Studio 4-bay provides media professionals with a sleek 24TB-capacity platform that can handle compressed 4K and 2K workflows while allowing for future growth. With its Thunderbolt 2 connectivity, users can daisy chain up to six devices together, ultimately resulting in up to 144TB of storage space. Thunderbolt 2 also contributes Mac favoritism (although the device can also be configured for use in a Windows environment), fast transfers, and plug-and-play functionality. For a Mac user, the G-SPEED Studio is ready to go out of the box with just two cables (Thunderbolt and power). The management interface is sleek and easy-to-use. It blends in perfectly with other Mac utilities, and wouldn’t require much experience to use.

G-Technology allows their customers to choose from a wide range of capacities and performance, leaving room for growth while keeping the initial investment as low as possible. However, unlike some other attached storage devices available, they do not allow their devices to be purchased without drives. A driveless model might attract buyers that just want to upgrade their console without shelling out hundreds more for drives that they already have. HGST wants to make the deployment simple though and for someone that doesn’t have fresh drives sitting around, this isn’t too much of a problem.

The G-SPEED Studio performed well compared to the LaCie 5big, which targets the same market. It was within a reasonable range for most of the benchmarks, although sometimes the 5big outpaced the G-SPEED Studio by around 20% (in RAID0 and RAID5) thanks to the throughput from the extra drive bay. When the 5th drive wasn’t used, the G-SPEED Studio was faster than the 5big by 20-35% in when both were configured in RAID10, which is a wide margin. The G-SPEED Studio is clearly impressive from both a performance and style perspective and G-Technology of course offers a larger 8-bay option for those who need more capacity and performance.

The HGST G-SPEED Studio, along with the rest of the Studio line, could fit all the needs of an expanding media professional (or team of professionals) for a reasonable price. The easy-to-use RAID manager is also a pleasant surprise.